Picture, for a moment, the two protagonists driving off at the end of the movie, when all is well that ends well? Imagine the car. The moment. The Mazdaspeed Miata is that car. It is that moment. The feel-good happy ending car. At least that’s how I initially approached the MSM. But by day 2, I had a mild change of heart.

I first drove a brand new 2004 Speed Miata in the summer of 2004 and again in 2005. What Mazda did to these cars was exactly what enthusiasts wanted: more power, more speed and more grip. At the time, these MX-5s served as a barometer for all sports cars that came after. With technology being what it is, they were eventually replaced, but never forgotten. Or so I thought…

Mazda understands better than we think

Over the last 13 years, I’ve driven no fewer than 20 different new and old Miatas but never again was I to spend real time as the helm of an MSM until just now. After coming off the cloud I was perched on when I picked up the car at Mazda Canada’s regional head-office and 30 km into the drive, I came face to face with the reason why Mazda’s never built and sold another Mazdaspeed Miata: It’s not a Miata. 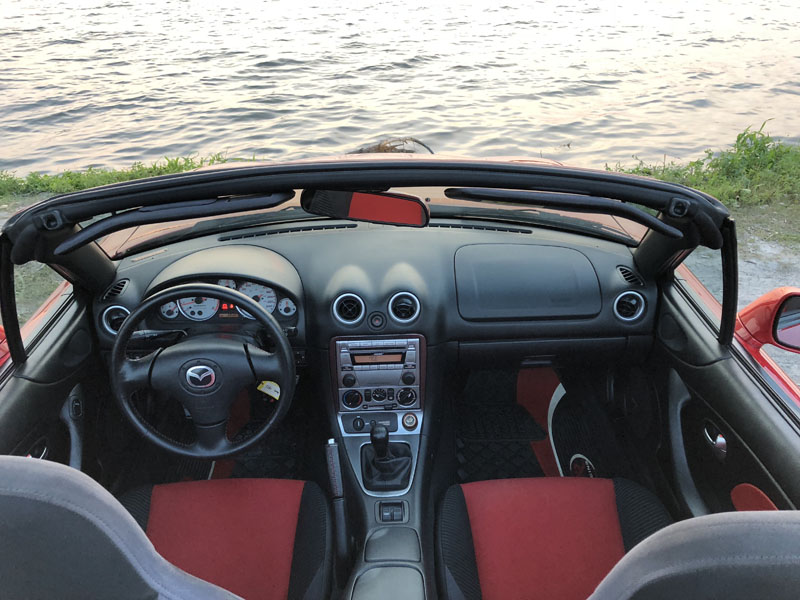 Mazda is wiser than we think. In fact, this is an example of the carmaker knowing more about what we want than even we do. With poise, time and distance, I can now see that Mazda likely commercialized the MSM to please the droves, and/or shut them up. The decision to deliver in limited numbers as a ramp-up to the follow-up NC generation was brilliant. Not making another Speed Miata is even smarter.

What the hell am I going on about? Mazda’s MX-5 Miata has always been about the drive, the experience, the feeling and the moment. It’s about top-down cruising and enjoying life. I promise you that if you drive any regular Miata for any length of time, then get behind the wheel of the Speed, you’ll understand.

To make the Mazdaspeed MX-5 a reality, Mazda had to boost power, beef up the mechanicals and stiffen and lower the ride. It could have been yours for $34,395 without A/C at the time. Here are the specs that made it what it is:

The turbocharged and intercooled 1.8-litre 4-cylinder develops 178-horsepower at 6,000 rpm and 166 lb.-ft. of torque at 4,500 rpm thanks to just over 7 lbs, of boost. The short-throw 6-speed manual gearbox is strengthened for the application and the clutch is of the heavy-duty type. The rear end consists of a Bosch torque-sensing limited-slip differential and the suspension is made up of Bilstein dampers and tauter springs that lower the car by 7 mm or a quarter of an inch. The Mazdaspeed Miata also runs on 17-inch Racing Hart wheels with 205/40 performance tires. 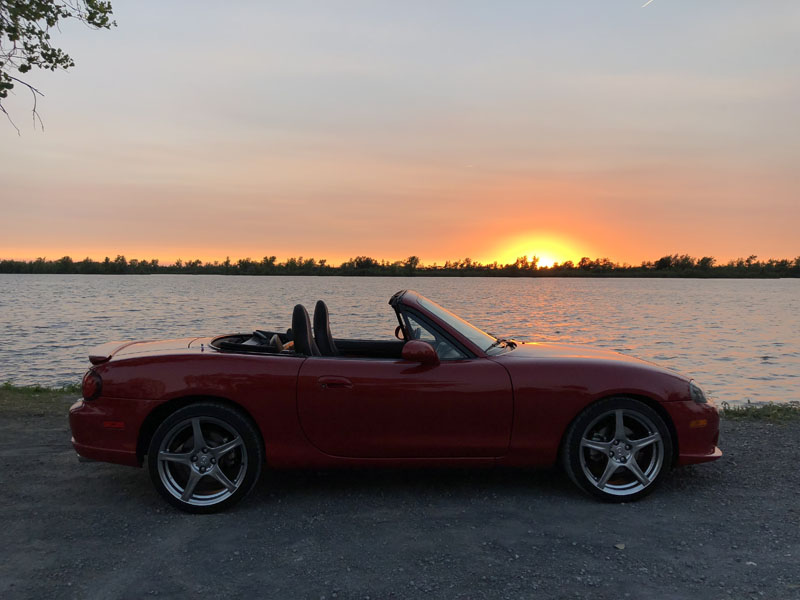 The result of all these “improvements” is a Miata that is no longer about the aforementioned MX-5 elements. It’s not possible to drive the MSM in a relaxed manner. The ride quality is destroyed by the stiffer dampers and lower profile tires. At the time, back in 2004, chassis, dampers and tires could only do one thing right. In this MX-5, it was handling at the limit. Everything else suffered as a consequence. Back then, it was what it was.

My sad yet very real epiphany

The ride being what it is now, the only logical thing to do when driving is to push the car harder and extract the extra power from the engine. At times, the 1.8-litre is lag-laden and its powerband is very narrow, which is par for the course. When on boost, the MSM flies, if only for a moment. Working the gears is a joy and despite the heavier clutch and short ratios, pedal play is satisfying. The brakes are up to the task as the car weighs very little.

Picture yourself shaken and stirred as you drive your favorite country lane or mountainous back road. Unless you’re keeping speeds up, diving from apex to apex, little genuine pleasure comes from the experience. Borrow your buddy’s ’90 NA with the 1.6-litre, drive the same routes and call me the following morning.

Do I want an NB 2004.5 or 2005 Mazda MX-5 Mazdaspeed? Yes, as though my life depended on it. Would I buy one? Absolutely! However, only after I find another pristine, low-mileage, one-owner Mariner Blue ’90 Miata like the one I passed up in 2017. Then, and only then will I pony up at least $10k for a clean MSM. If you find one for less, be worried. Very worried.