Reviews 2017 Alfa Romeo Giulia Review: A Lot of Germany with a Little...

2017 Alfa Romeo Giulia Review: A Lot of Germany with a Little Italy 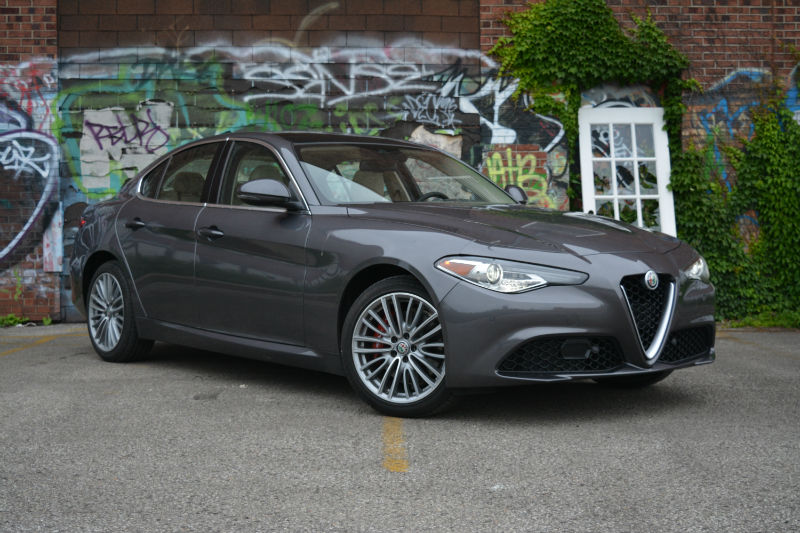 The compact luxury segment didn’t need another option, it really didn’t. We’ve already got the Big Three with the BMW 3 Series, the Mercedes-Benz C-Class and the Audi A4, and then we’ve got the Lexus IS, the Infiniti Q50, the Jaguar XE, the Acura TLX, the Cadillac ATS and the Volvo S60. If you can’t find one car you like in the bunch, it’s because you’re just too damn difficult.

Any other model that wants to join the party really needs to bring something unique to the table. If not it will just crash and burn. That may happen to the new 2017 Alfa Romeo Giulia, but if does go down, it will do so swinging. This is a car that can take on the best from Germany, and yet has enough Italian quirks to make it unique enough to stand out. It can also annoy you, but it does so in the same way your significant other can annoy you. It’s ultimately all good.

The 2017 Giulia has a lot going for it, starting with the fact that nobody really knows what it is. That means that if you want to stand out on the road with a reasonable budget, you can’t really do any better than the Alfa in this segment. The car gets noticed and questions are asked at the gas station. Regardless of whether you want that or not, it will happen. 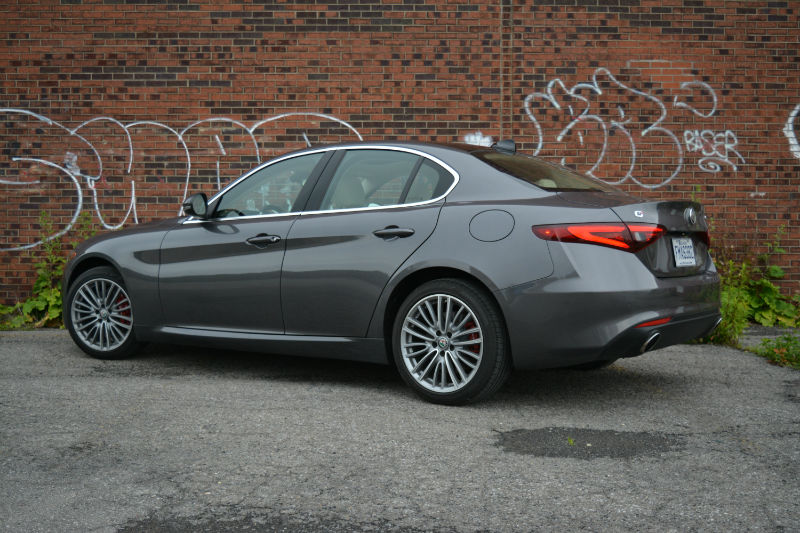 This is a handsome car with a design that actually has some thought and even passion in it. Our tester came with the sport pack which means 18-inch wheels, different front and rear fascia, and red brake calipers that give the Giulia a more aggressive look that works. Even the entry-level model stands out thanks in part to that unique front end and that weird Alfa Romeo grill. On the other hand, if you have to put a front license plate on the thing, you will groan every time you walk out in the garage. Oh well…

Alfa Romeo Giulia versions that don’t have a four-leaf clover on them are powered by a 2.0-liter, four-cylinder turbocharged engine that give the driver 280 horsepower and 306 pound-feet of torque. That gets you to 100 km/h in about 5.1 seconds which is in between the competitions entry- and mid-level versions. 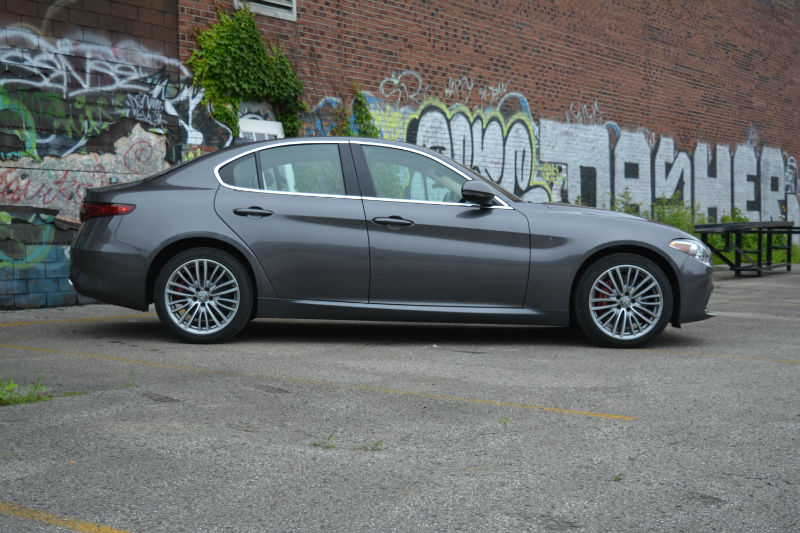 That said, the turbocharger needs a tap on the shoulder to get going and that hesitation actually has to be taken into account before changing lanes or passing. The 2017 Giulia is not slow by any means, but I expected a bit more punch given the specs.

On the other hand, handling is the most surprising and enjoyable feature of the Giulia. It is tight, direct, connected and nearly perfect. The car reacts to every input with the kind of quickness and sharpness enthusiasts will love. On the other hand, this isn’t an uncomfortable car despite being very agile and sporty.

Now, there are some things that don’t work. First of all, the rear seats are cramped. Very cramped. Kids will be fine, but no adult with enjoy their time back there. And then there’s the infotainment system. I’d love to know why the Maserati Ghibli gets FCA’s Uconnect system, but the Giulia gets an in-house infotainment system. 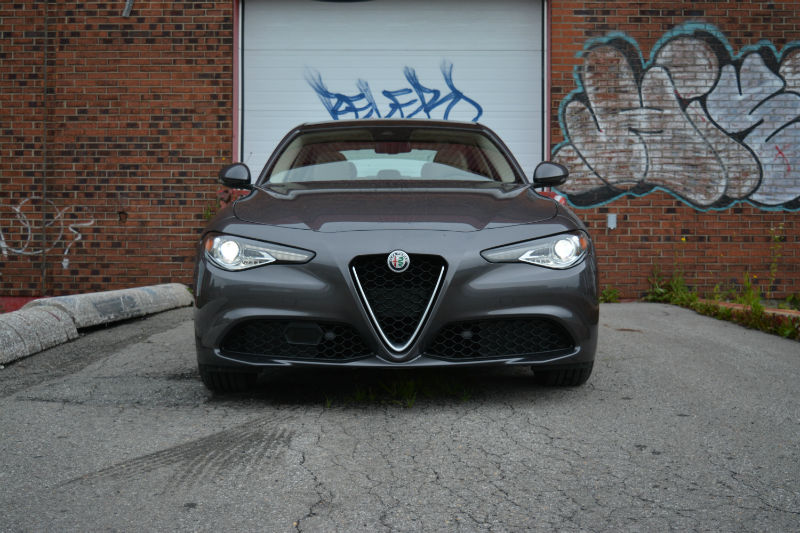 Sure, we blamed Maserati for using a run-of-the-mill system, but ergonomically and logically it works. The Alfa’s system is confusing even after a week behind the wheel. There are a lot of menus, and you have to keep your eyes on the screen to figure it all out instead of looking at the road. As an owner you will get used to it, but it will never be intuitive.

But the most Italian thing about the 2017 Alfa Romeo Giulia, aside from its handling and design, is the fact that if you clean your windshield with the sunroof open, you will be showered in blue or purple liquid which others will smell all day…

That’s really all that’s bad about the new Alfa Romeo. The front seats are comfy and space upfront is fine unlike in the back. The trunk is ok.

This is a car for those who like to drive, and who want to stand out. It will work if you have small family and remember to close the sunroof if the windshield is dirty.

Today is a brighter day for us all. The MX-5 Miata was born in 1990 and will never die. For most, the Mazda MX-5,...
Read more
Previous articleTop 10 Winter Tires for 2017
Next article2018 Jaguar F-Type SVR Coupe Review : Lord Have Mercy