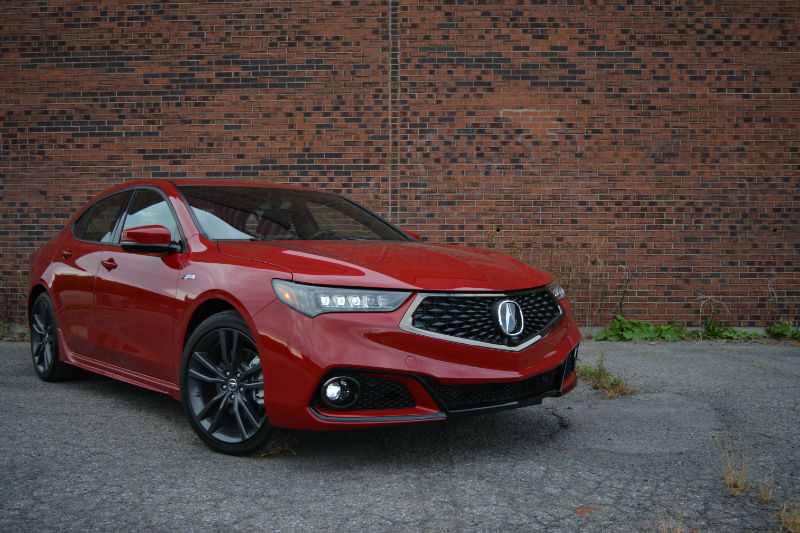 At the risk of repeating myself, should you’ve ever read any other Acura review that I’ve mashed together, they long ago fell out of favour with me. Without rehashing the whole story, Acura shot itself between the eyes right around 10 years ago when they renewed the TL and TSX.

Honda’s luxury division knew what they’d done so for 2015, they meshed both the TL and TSX into a TLX with the promise of making it all better. It wasn’t. It fell short of all expectations and the bar that was set way back in 2004 with the then-new TL. 2018 marks the TLX’s first mid-cycle refresh and with it, Acura’s decided to turn the dial-up. Now, have they managed to create what driving enthusiasts and luxury car enthusiasts want?

The answer is a resounding yes. Finally, Acura’s done something right with what should be their halo car, their 3 Series or C-Class. The true beauty lies in both the sheetmetal and the content that one gets for the price. There remain some issues, such as the name “TLX SH-AWD Elite A-Spec” for the top-spec car. The TLX TREMENDOUS or TLX Super Elite would have done the job…

Honda’s pulled out a few stops with the 18’s facelift. In fact, the tested SH-AWD Elite A-Spec is downright attractive, especially in San Marino Red! The principal exception to the car’s handsome-ness is the diamond pentagon grille which looks like something splattered all over a normal grille. Acura’s struggle with their collective front-end designs began in the mid to late 2000s but I can say that they’re almost there…

The A-Spec features unique front and rear fascia, 19” wheels, black chrome accents, and a whole lot more attitude than the run-of-the-mill TLX. To be honest, the basic TLX looks like any other mid-grade Japanese sedan. The least expensive A-Spec retails for $42,190, or about $7k more than a “TLX”. Do it. 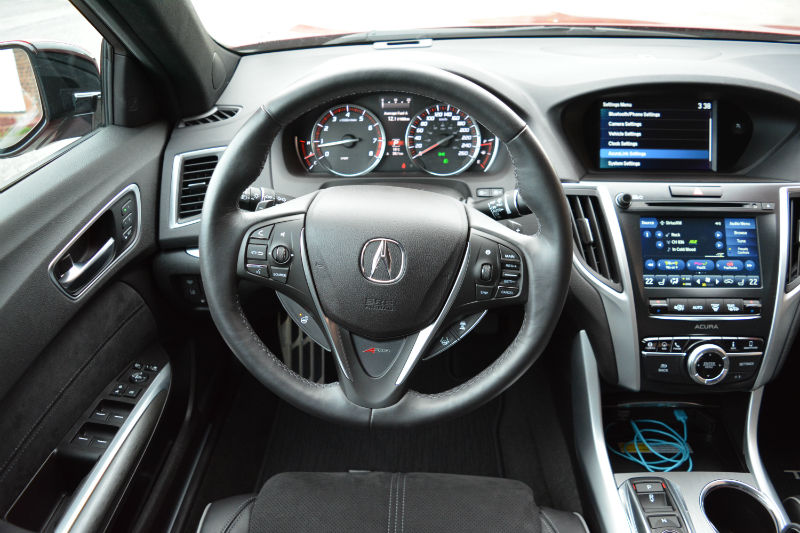 On the inside, the TLX does not fare as well where the dash’s layout looks somewhat dated. The culprit, or culprits, are the large dual screens and the small one in the instrument cluster. The latter does not display speed while the other two are simply overkill. The redundant controls are thankfully well laid out.

Overall, the fit and finish are exemplary and I like the metallic coloured trim that brightens up the cabin.

As a large compact luxury sedan, the TLX provides decent room for all. The rear occupants will find headroom lacking especially if taller than 5’10” or wearing a hat. Otherwise, there’s plenty of leg- and shoulder room. Up front, the heated and ventilated perches deliver plenty of support and comfort.

There are only a few stowage spots up front but are sufficient for a few phones and keys. The trunk is abundantly generous. It is deep and wide but the lid’s opening is fairly narrow, impeding access.

All around, seating is quite cozy but the best part is the car’s refined behaviour.

At $35,990, the 2018 Acura TLX undercuts the likes of the base Audi A4 and BMW 3-Series by $4,000 to $6,000. Thing is that at this price point, especially when broken down on a lease, the Acura’s monthly payments work out to being roughly the same or $100 less, depending on current lease programs, and that’s simply not enough to justify the TLX. 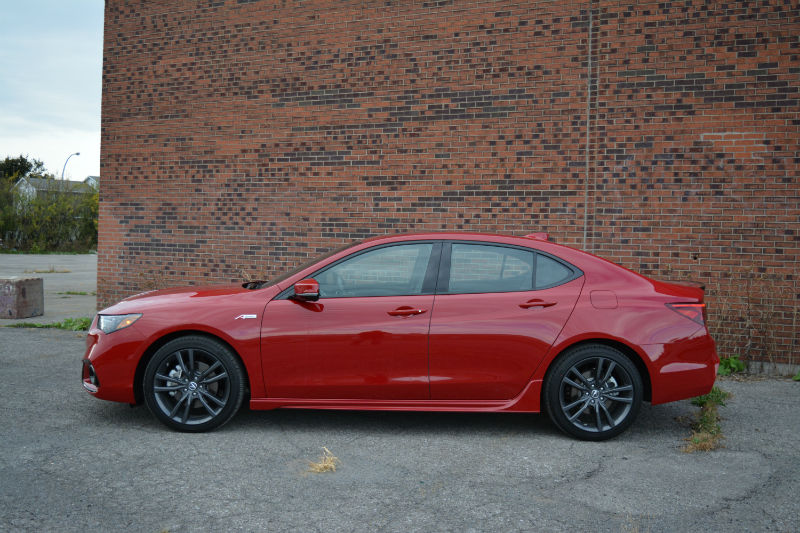 At $51,990, the TLX SH-AWD Elite A-Spec turns that equation on its side. Equipment-wise, it offers more kit for the same money or the same kit for slightly less. What the Acura does not have is the clout of the Germans nor the power the S4 or 340i xDrive have.

The value remains, in my opinion, in selecting this Elite A-Spec. Not only is it loaded with a heated steering wheel, heated and ventilated seats, ELS audio system, remote start, navigation, satellite radio, Apple CarPlay and not to mention a vast array of safety features, but it’s the best looking of the lot. There’s oodles of value in the way the car sits on its wheels as it heavily influences how one feels about themselves and their car.

Complaining about the silky-smooth 3.5-litre V6 stems only from the fact that I’ve sampled nearly all of the TLX’s competitors. The absence of low-end torque is what “hurts” the car’s performance. The available 267 lb.-ft. of torque roll in at a lofty 4,500 rpm which means generous throttle application is required to get up to speed.

The associated 9-speed automatic transmission does a great job of compensating for the lack of low-end grunt. Unlike previous Honda/Acura products that were cursed with a 9-speeder, the TLX’s actually makes performance and efficiency gains. Be it in Normal or Sport+ drive mode, the “box is always doing the right thing.

As the go pedal closes in on the firewall, the V6’s 290 horsepower at 6,200 rpm keeps things interesting. The engine makes palpable music as the revs build but there’s little drama. The V6’s linear and refined power delivery is much in line with the car’s overall behaviour. 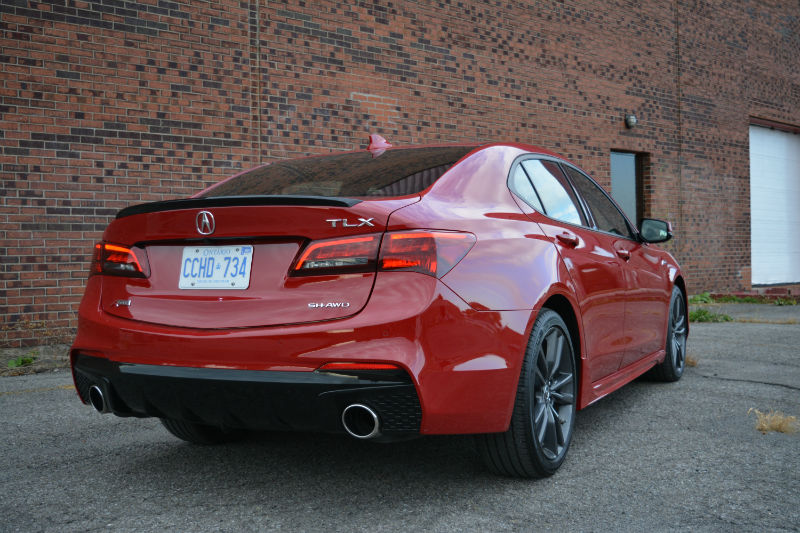 Despite Acura tuning the A-Spec’s steering and suspension, the ride is fairly supple and comfortable. Handling is predictable and steady. The TLX will tackle on and off-ramps carrying a fair amount of speed but the chassis’ compliant nature is what shines through the most.

A word on Acura’s SH-AWD; I did not much get the chance to sample it. Perhaps its operation is so transparent in nature that I failed to notice it. Either way, it can deliver up to 70% of available torque to the rear wheels which should equal fun times in winter…

After spending a week with the TLX SH-AWD Elite A-Spec, I’ve come to very much appreciate what Acura’s done for and with the car. Its styling will make me shut my mouth about the past’s numerous mistakes while the sporty cosseting ride has reminded me that Honda knows what it’s doing. This is only true when the engineers get to do what they want, as proven by the insanely good Type R.

The Ford F-Series pickup is tops among the most popular cars in Canada. The Toyota Corolla topples the Honda Civic and becomes the...
Read more
Previous articleEV issues falling one by one
Next articleToyota unveils unusual luxury concept ahead of Tokyo Motor Show