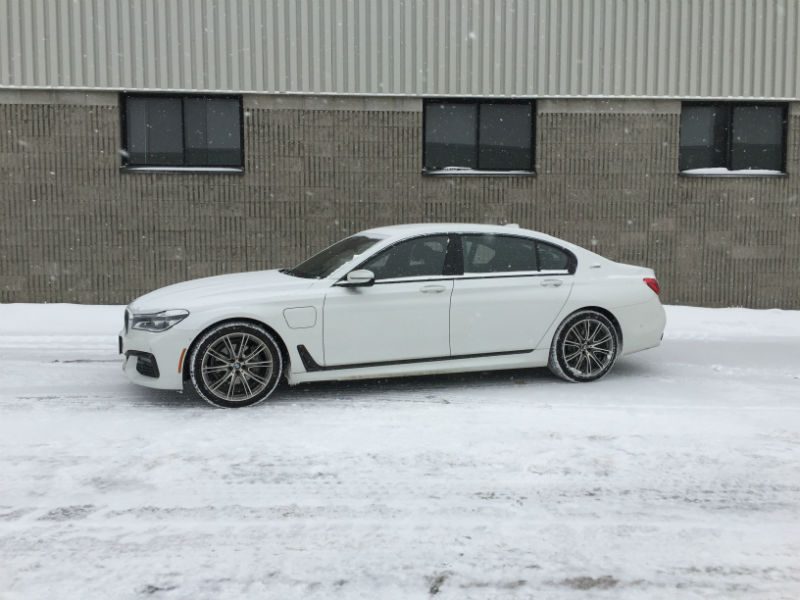 My week with the 740Le started off bad. I’d only driven 1 kilometer and literally came face to face with frozen wipers. You know, when the central portion of the driver’s side wiper is no longer in full contact with the windscreen – it only touches enough to smear.

As I drove home with my seat propped up in order to see over the blind spot, I wondered how it was possible that in 2018, and in a $150,000 car, this was even possible. I quipped that this was a reason why autonomous technology was becoming so prevalent. But then, I got a few error messages stating that I now had “Limited support with driver assistance” and a slew of affected systems. Yay technology.

Then, it got worse. I discovered that this particular 740Le has an Executive Lounge package which transforms the rear bench into a 2-seater. In itself, that’s fine but I was unable to tether my son’s baby seat on the rear passenger-side seat – I could not find the actual anchors. I did locate them on the rear driver’s side so I installed the baby seat. Just when I thought all was good, get this, the door would no longer close… I’m dead serious. This car includes soft-close doors (latches catch the doors and pull them shut automatically), a feature I absolutely love but, because of the cold and weather, they too essentially froze. I, in the other hand, was fuming.

And despite all of this, I really like the 2018 BMW 740Le. I drove and reviewed the 530e some time ago and I thought it was a waste of a good car. The 740Le feels quicker, far more refined, and far less burdened by the battery pack. I still think plug-in hybrids are automotive snake oil, though.

The latest G11 iteration of the 7-Series is my favorite since the E38 car that blew my mind in Tomorrow Never Dies. That 750iL still looks as regal and elegant now as it first did more than 20 years ago.

The current 7 Series is nearly three years old but like the E38, it is aging gracefully. Even the mad-mad M760Li looks reasonably tame. The differentiating elements to the 740Le are limited to eDrive badges and goodies thrown in with the M Sport Package such as M Aero and unique wheels. 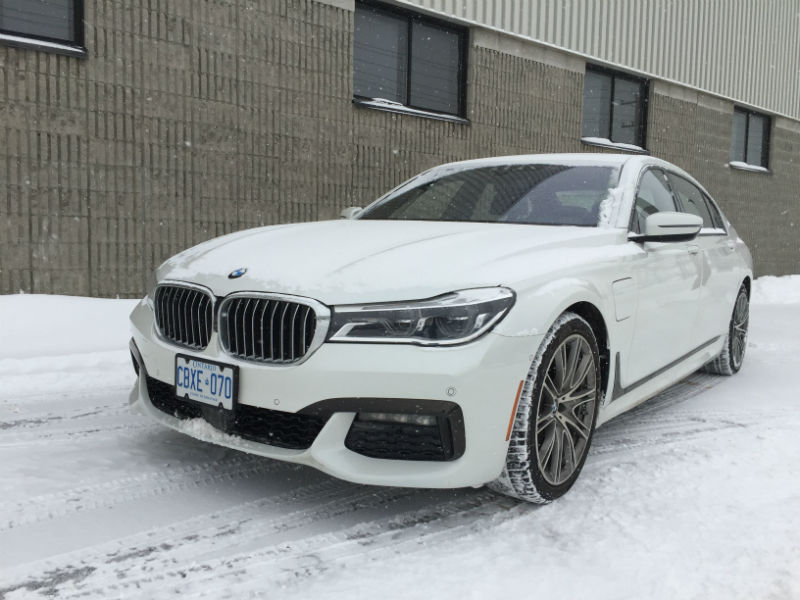 The cabin is a complex mix of controls, materials and surfaces. A certain acclimatization period is necessary but once settled in and despite the huge array of buttons, the more important ones can be accessed quickly enough.

The dashboard is very BMW and thus unique. Ergonomics are stunted by design but what catches the eye are the attention to detail and fit and finish. The Napa leather is awe-inspiring and the rear seats are impossible to give up.

The 740Le is all about the rear quarters. As an “L”, legroom in this extended wheelbase car is limo-like. It is necessary to accommodate the Executive Lounge packages, that in my car, includes the small ottoman setup for the right passenger.

The four-seat configuration insures that the those in the rear are treated like royalty. The perches are 16-way electrically adjustable, massaging, heated and ventilated. The rear console and iDrive controls further the experience. 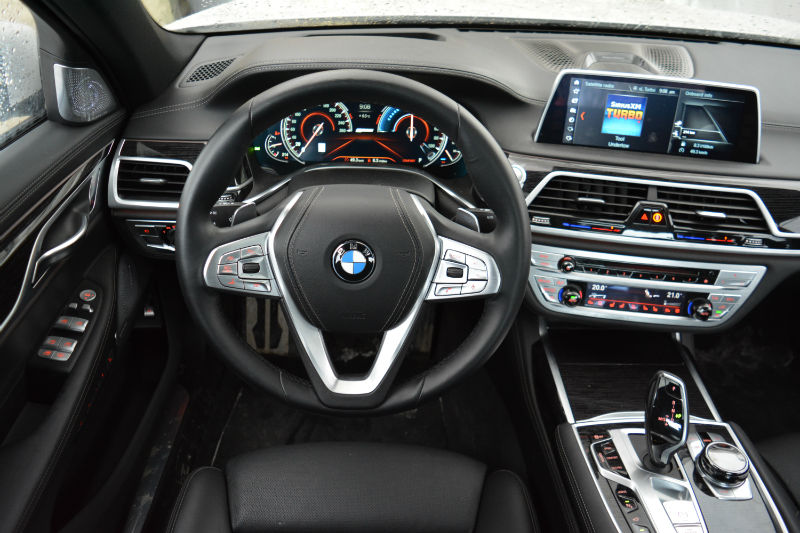 Up front, comfort and space are equally impressive what with the same cajoling features as in the rear. Somewhat like the 530e, the large battery required to make this a working PHEV takes up roughly 100 liters of otherwise useful space in the boot. More precisely, a 750 delivers 515 liters of trunk space while the 740Le settles for 420. The loss is less dramatic than in the 5 but still something of a shame.

It is important to note that the car is supremely quiet at all times, well insulated and isolated from road and wind noises.

But even so, the 740Le’s problems are many fold. First, the 750 exists. As the vast majority of these ultra-high-end cars are leased, what’s $175-200 more a month when you’re already spending $2k? I’m going to go out on a limb and state that most prefer the V8 experience over the PHEV 4-cylinder buzz. The few, if any, that would be brave enough to buy a 740Le will likely be very shocked by the resale value after only a few years, like two.

In most cases, these cars are seriously spec’d out. Case in point, my near $150,000 tester. The long list of options includes the Executive and Executive Lounge, Premium, M Sport and Advance Driver Assistance packages. Then there’s the incredible Bowers and Wilkins audio and you get a luxury saloon that exudes comfort, supreme wellbeing and convenience.

By contrast, plugging in your car at every chance to take advantage of the batteries seems almost inconvenient. This could in part also explain why I’ve never seen a hybrid (eDrive or ActiveHybrid) 7 Series, ever or anywhere (I do travel extensively), unless it was part of a BMW fleet.

The strange thing is that the 740Le is quite entertaining to drive, for a large luxury car. The turbocharged 2.0-litre 4-cylinder and attached electric motor are surprising. Based on the 258-horsepower version of the 2.0-liter, the 740Le benefits from a total system output of 322-horsepower and 369 lb.-ft. of torque. 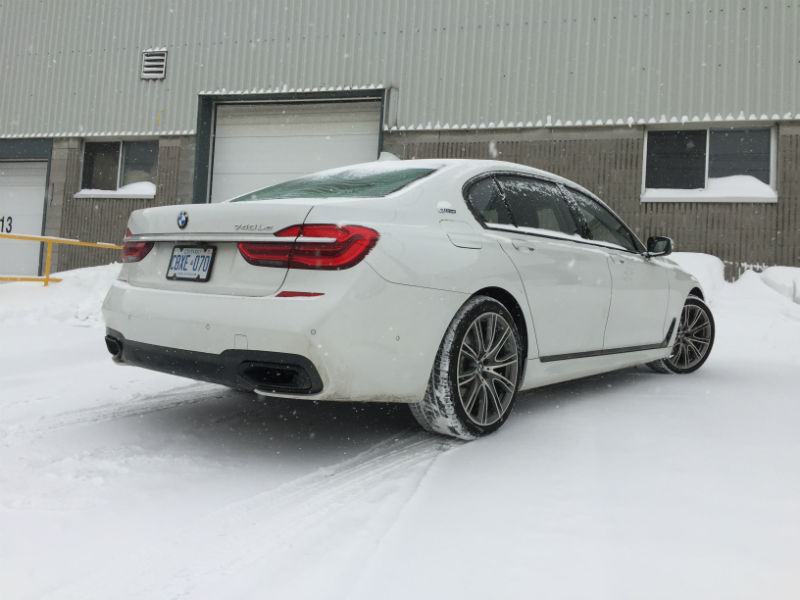 With xDrive and 8-speed automatic transmission fitted as standard, the 2,000 kg (4,400 lbs.) sedan still manages a commendable 5.3-second sprint to 100 km/h. The same 9.2 kWh battery pack found in the 530e provides the BMW 740Le with about 25 kilometers of EV range. Unlike the 530e, I did not plug the car in at every occasion if only to get a sense of the vehicle’s “real” fuel consumption.

On paper, the 2018 740Le consumes an average of 8.8 L/100km. Over my time with the car, I averaged 11L/100km, which is better than I expected. This is the middle of a dreadfully cold winter and the car’s battery meter hovered barely above empty the whole time. According to BMW, this should be a 40% improvement over the 750Li.

Beyond all of that, the 740Le remains a solid and comfortable cruiser. The car’s weight is obvious in the controls, reminding the driver that this is in fact a large luxury car with an extended wheelbase. Most people pay extra for this sentiment. The ride is cosseting all the while providing sublime linear handling.

The powertrain, through the seven drive modes, goes from docile to unexpectedly spritely. A good knock on the throttle will throws heads back, even in Comfort mode. Like the 530e, I found the “adaptive” mode best suited for 99% of driving situations and left it as such. There’s nothing embarrassing about the BMW 740Le’s performance however I doubt anyone will brag about the 4-cylinder tucked way in the back of the large engine bay, below the enormous bonnet.

Much like the 530e, the 740Le is a great car. Its biggest issues come from the petrol versions of the same car for only a few extra dollars, on a lease especially.