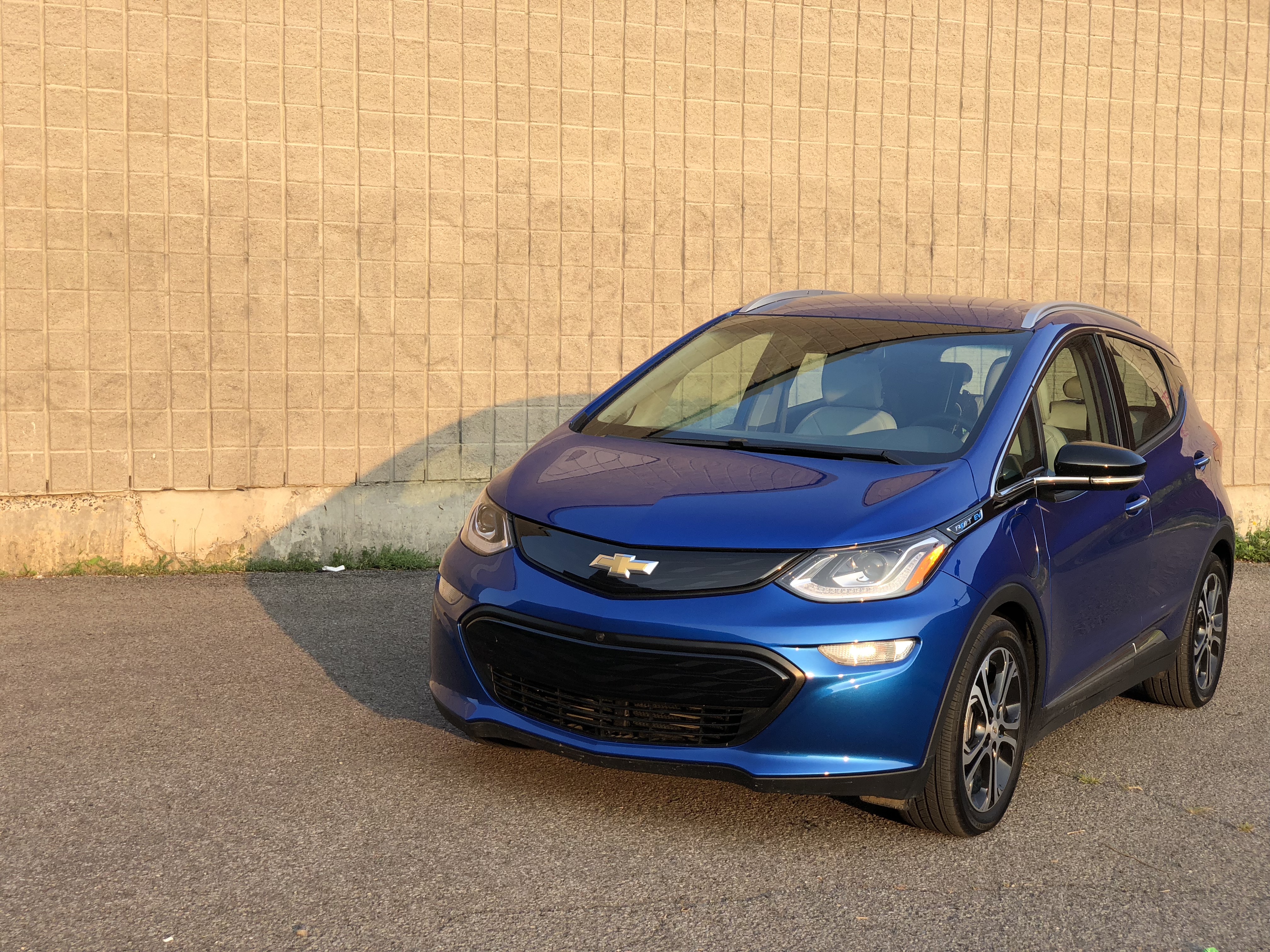 This car is proof positive that exposure is the best way to get consumers to see the EV light. I specify the Bolt because it actually had an impact on me. I’m not special by any stretch of the imagination however I have driven every mass production EV currently available on the market today, with the notable exception of the Tesla Model 3. I look forward to Hyundai’s electric Kona and what it promises to deliver but for the moment, the Chevy Bolt is the draw.

As we noted in our comparison test, the Bolt is not the best overall EV but it turns out to be the one that can be driven with little regard to range. Its power too is addictive, if mostly because there is no guilt associated with it, nor is there any noise. Quite frankly, the more time I spent with the Bolt, the more I thought about revising my personal winner, or choice, in our EV test.

The Chevrolet Bolt is a fantastic car that’s got me ever more enthralled with the electric car. I’ve said before that the wife and I are ready to put upwards of $40k on a new electric car and the Bolt has convinced me that I will not miss the internal combustion engine, so long as I can still drive my old junkers when I feel like it, as soon as I get them road-worthy again…

While I think the Chevy looks good, I completely disagree with GM and the fact that they classify it as a crossover – this is nothing more than a marketing ploy. In my mind, it’s a tall and handsome 5-door hatchback. The car sports numerous attractive details such as the trim on the front fender that ties the headlights into the door and mirror. The floating roof, a common aspect today, works very well to both separate and tie in the rear of the car. 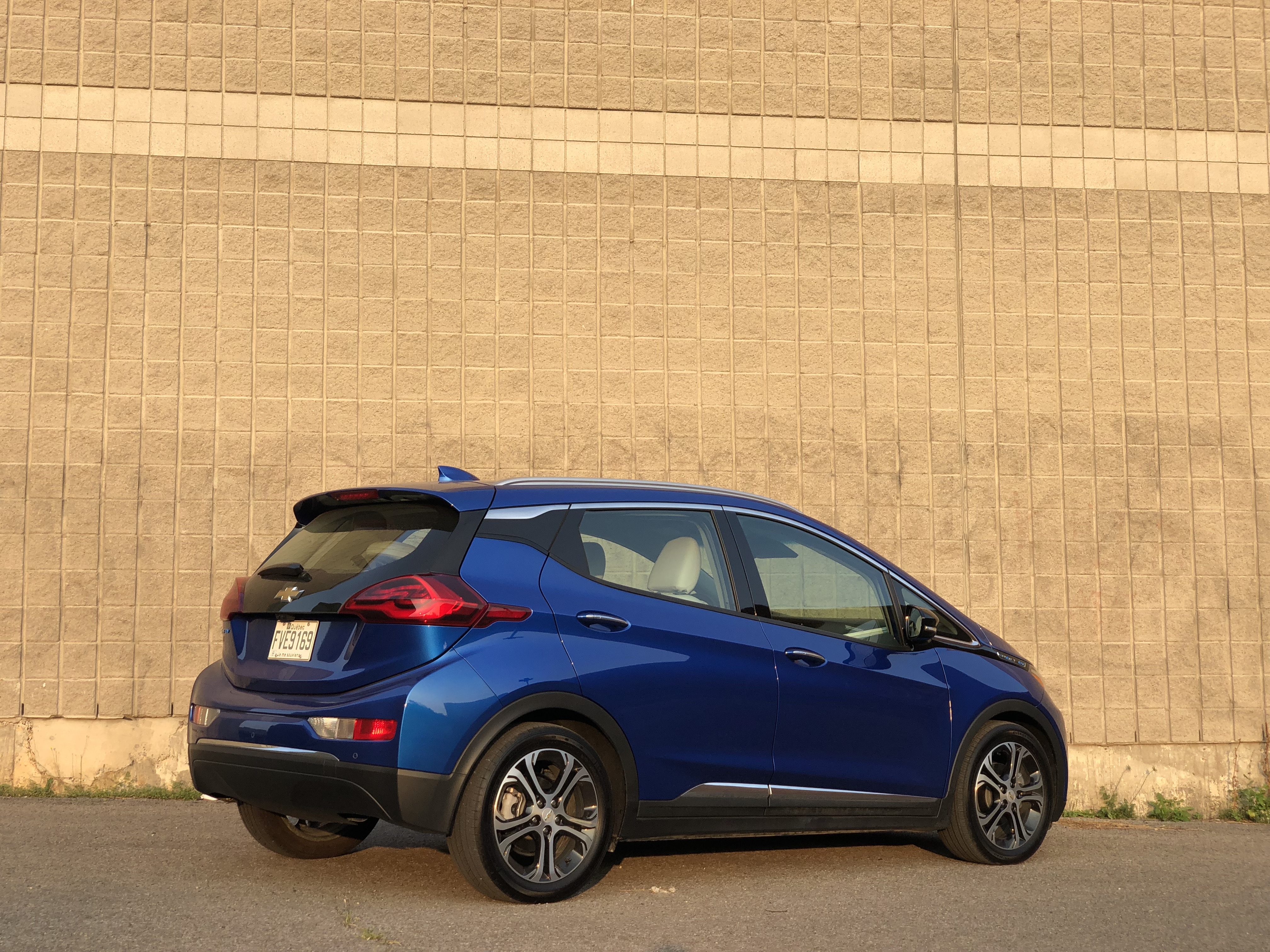 The 2018 Bolt is available in two trims: LT and Premier. The latter gains Ultra-Bright machined aluminum wheels of the same design, roof rails and exterior mirrors with integrated turn signals

The cabin’s design is both hit and miss. The floating dash idea is brilliant however the steep incline of the principal 10.2-inch screen means that reflected sunlight is a constant issue. The dash’s multiple layers give heft to the instrument panel but its wide and flat upper portion also reflects light on the windshield. And lastly, some of the materials, in particular the white textured plastic surface, are unacceptable in a $50k car.

The decision was made to cater to occupants more than gear and boot space in the Bolt. The trunk is rated at 479 litres in volume but it’s not readily accessible. The upside is plenty of space for rear passengers. 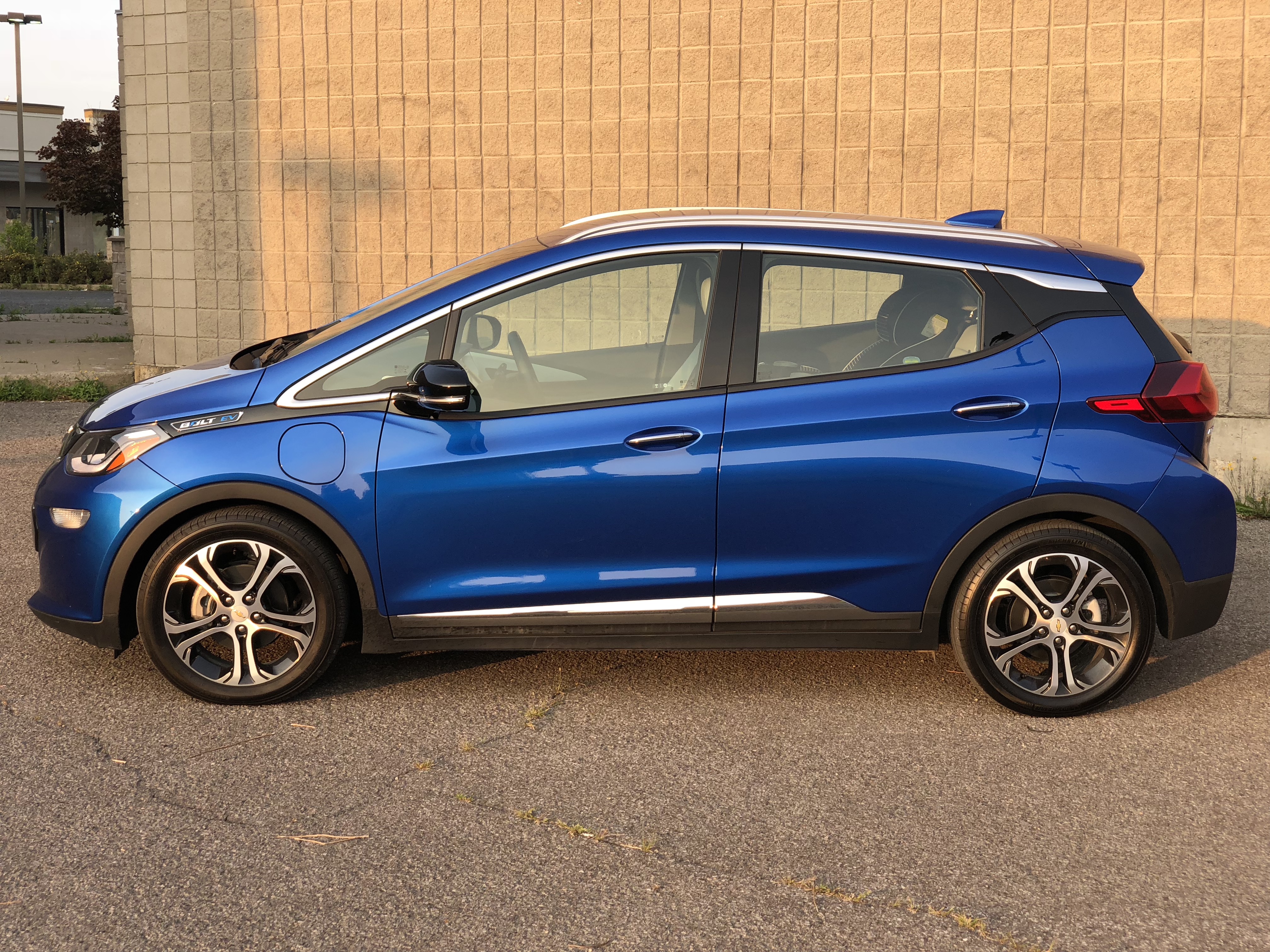 The second row bench will handle three occupants, or two human and a large baby seat. Legroom is immense, as are head- and shoulder-room. Incidentally, installing and removing the baby seat requires no lower-back contortions thanks to the tall upright rear door opening.

Front passengers are privy to loads of space for everything, including massive amounts of storage. If you travel with a few friends, pack lightly. If you’re travelling with your spouse, you can camp in the car! Best of all, when waking up in the morning, you won’t bump your head on the ceiling…

This is where the 2018 Chevrolet Bolt loses its edge. With a base price of $46,445, it shoots itself right out of its own segment. The LT’s window sticker is roughly $10,000 more than all of its direct competitors. 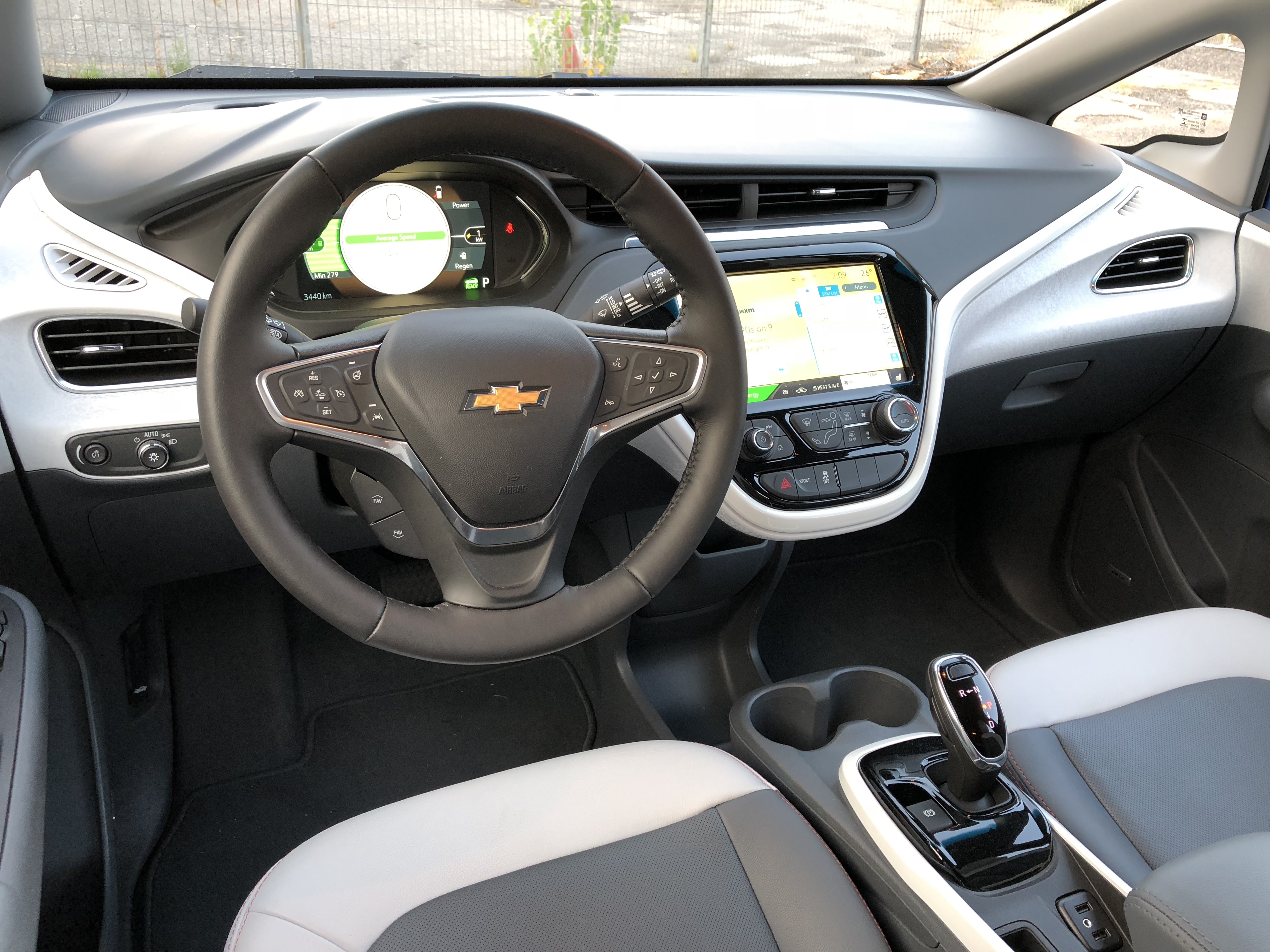 The value and justification lies solely in the larger battery and more powerful drive unit. Equipment-wise, the LT has nothing more than a sub $36k Nissan LEAF or Hyundai Ioniq. The top-line $51,445 Premier doesn’t fare any better. Between the two Bolts, the price gap is filled with leather seats, rear heated seats, Bose audio, rear cross-traffic alert, surround vision and a few other elements.

In this light, the Premier is essentially a waste of $5,000. The LT’s the way to go but the Bolt remains a tough sell. That is, until it is driven.

I’ve already touched on the driving experience and it is without a doubt the car’s highlight. About the drive unit, it produces 200-horsepower (150 kW) and 266 lb.-ft. of torque, or enough to send the Bolt to 96 km/h (60 mph) in 6.5 seconds. It honestly feels faster than the number suggest.

The 60 kWh lithium-ion battery is considerable and when fully charged, provides a rated 383km range. Depending on driving habits, 400 kilometers on a full charge is very possible. My driving habits involve dipping as deeply and as often as possible into all that instant torque.

The Chevrolet Bolt has the simplest of drive modes. There’s “D”, “L”, Sport” and the wheel paddle. It’s all very intuitive. You start off in “D”, pull back on the shift-lever once more for “L”, which increases regenerative braking. I find “L” ideal for the city or negotiating traffic. With the proper throttle dosage, it’s possible to never have to use the physical brake pedal. The paddle’s novel at first and does slow you down faster but “L” is more instinctual. In both cases, the Bolt will come to a complete stop. I discovered that combining Sport and “L” is possible – it’s like driving in first gear at all times, with maximum acceleration and engine braking.

With only a few drive-mode options and loads of power, the Bolt is almost perfect. Almost because the ride quality is less than ideal, however far from bad. The comparison test really brought this to light as the LEAF’s extreme coziness and the e-Golf playful nature cast a shadow on the Bolt. It is neither especially comfortable nor dynamic. I have to say though that if the Bolt was $7,000 cheaper, I could live with it as is.

All in all, I really like Chevrolet’s 2018 Bolt. Its main attribute though will soon be matched or eclipsed by LEAF’s upgraded battery and by the Hyundai Kona and Kia Niro EVs. The Koreans won’t arrive for a while yet and we don’t know what they’ll cost. Chevy still has time to revise the Bolt in order to better deal with the coming onslaught of EVs.

My main issue at the moment is that no EV in my price range fits my family needs. Sucks to be me because I’ll have to wait until 2020 for something a little larger to come down the pipeline.

Latest Accord comes with Google built-in Offers hybrid and gas power The 2023 Honda Accord sedan is getting ready to arrive at dealers in...
Read more
Previous articleTop 50 best-selling cars in the world so far in 2018
Next articleTop 15 most fuel-efficient AWD vehicles on sale right now