FCA is in a precarious yet envious position. Precarious because, with the exception of Jeep and RAM, the other brands are dealing with average sales with old or older products and envious, because a number of the older vehicles have far and wide reaching appeal. The wife, a certifiable car nut, and I are smitten by what Dodge in particular has on offer.

We’re both completely in love with the 392 Hemi Scat Pack Challenger with a shaker hood and 6-speed manual and now, we’d add a Durango SRT to the fleet if only a litre of fuel was below that not so mighty loonie…

Let’s get this out of the way immediately. Even if the truck is rated at about 15L/100km on average, you’ll not be able to keep it much under 18L. If you can return an average of 15L, you bought the wrong truck. My week with the Durango SRT was costly at nearly 19.5L/100km, but I’d do it over and over again.

There’s no need to kid ourselves, the Dodge Durango is an old goat. It was launched pretty much as is for the 2011 model year, refreshed for 2014. And yet, for all its wrinkles, it still holds up well today. Only the base SXT falls flat in the attitude department but it gets really good the further into the lineup one dives. 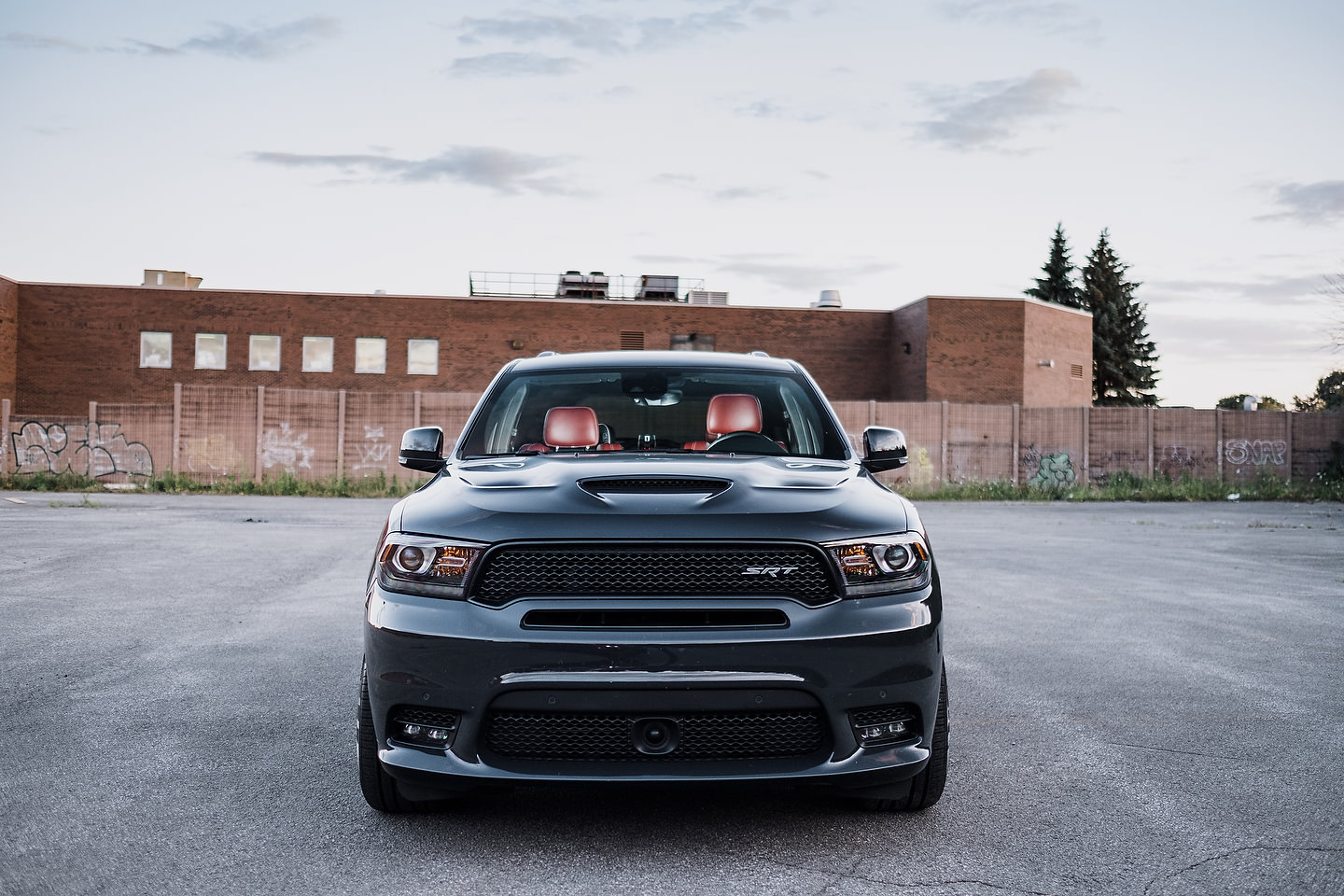 The R/T and SRT make the cut visually thanks to the SRT front fascia and hood, the 20-inch wheels and the Durango’s inherent macho charm. In an unusual twist, the truck’s Granite Crystal colour did wonders for it as well. Octane Red or B5 Blue Pearl would be my personal choices.

The large cabin mirrors the Durango’s exterior in that it’s dated somewhat but ageing very gracefully. The secret to its youthful look is not Oil of Olay but a simple dash layout with centralized controls. The U-Connect 8.4-inch screen remains to this day one of the better ones to use with the intuitive touchscreen and rotary nobs. Fit and finish are great to boot and on top of it all, check out the super-fat steering wheel!

Our friend the Durango is a 7-seater by default. A 2nd row console with armrest is an option and reduces seating capacity to 6. Among the options for the Dodge Durango SRT is the aptly named Lightweight Performance Package which simply deletes the 3rd row bench. As a no-cost option, it is A MUST!! 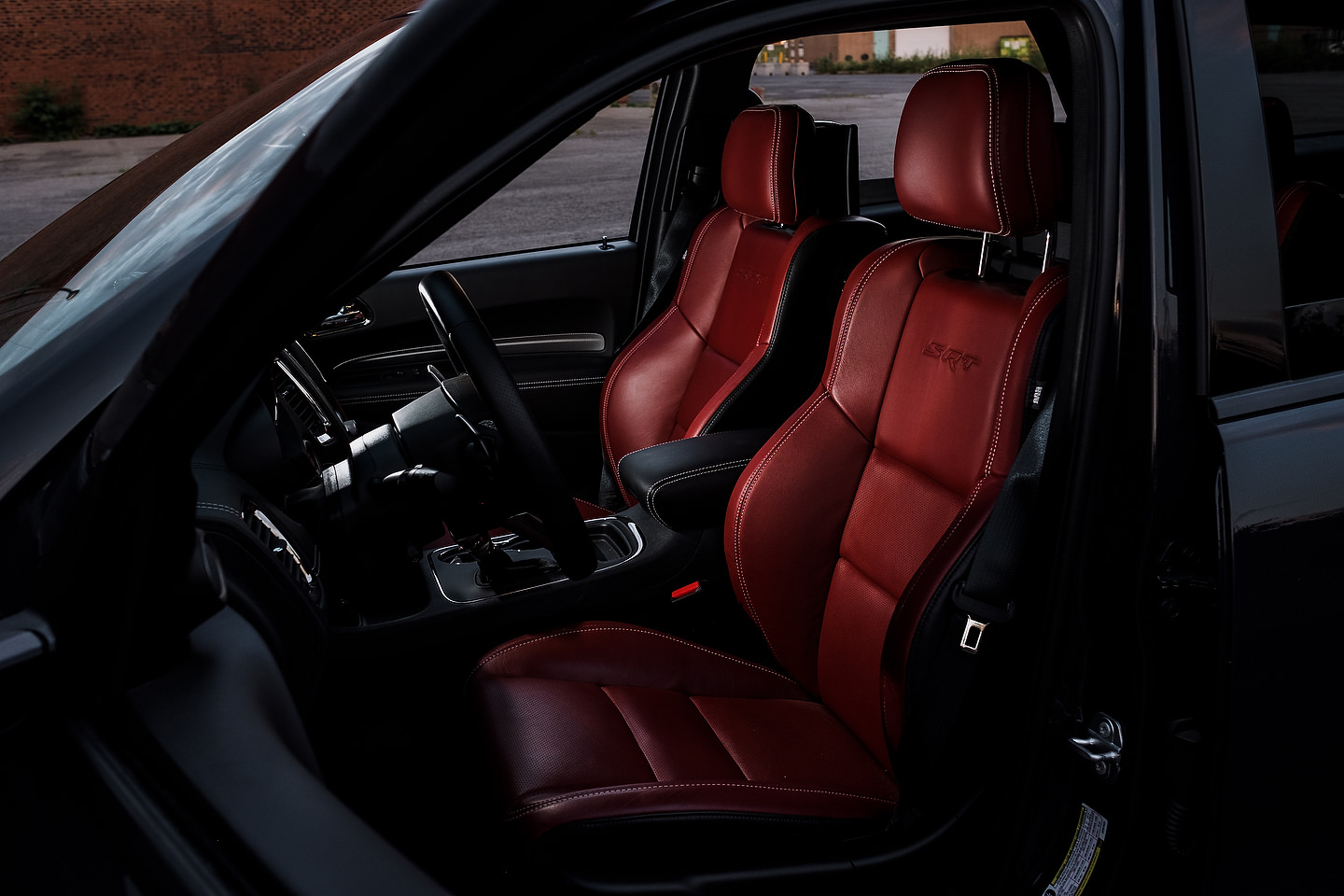 In reality, the seats are all fairly cozy with plenty of leg- and headroom in the first two rows. The 3rd row is always a backup plan and serves best when stowed into the load floor maximizing boot volume. Behind the 3rd row, the trunk offers 490 litres of space. When out of the way, volume increases to 1,350 litres. That no cost option likely increases trunk space so it’s a win-win!

Storage spots are not as generous or numerous as they could be. This is true with the rear-entertainment system selected as the DVD player lands in the front centre console.

The 2018 Dodge Durango SRT near as much makes no sense. I’ve never wanted a more senseless vehicle in my entire life. Base price for the SRT is a cool $73,345. My tester was much pricier. 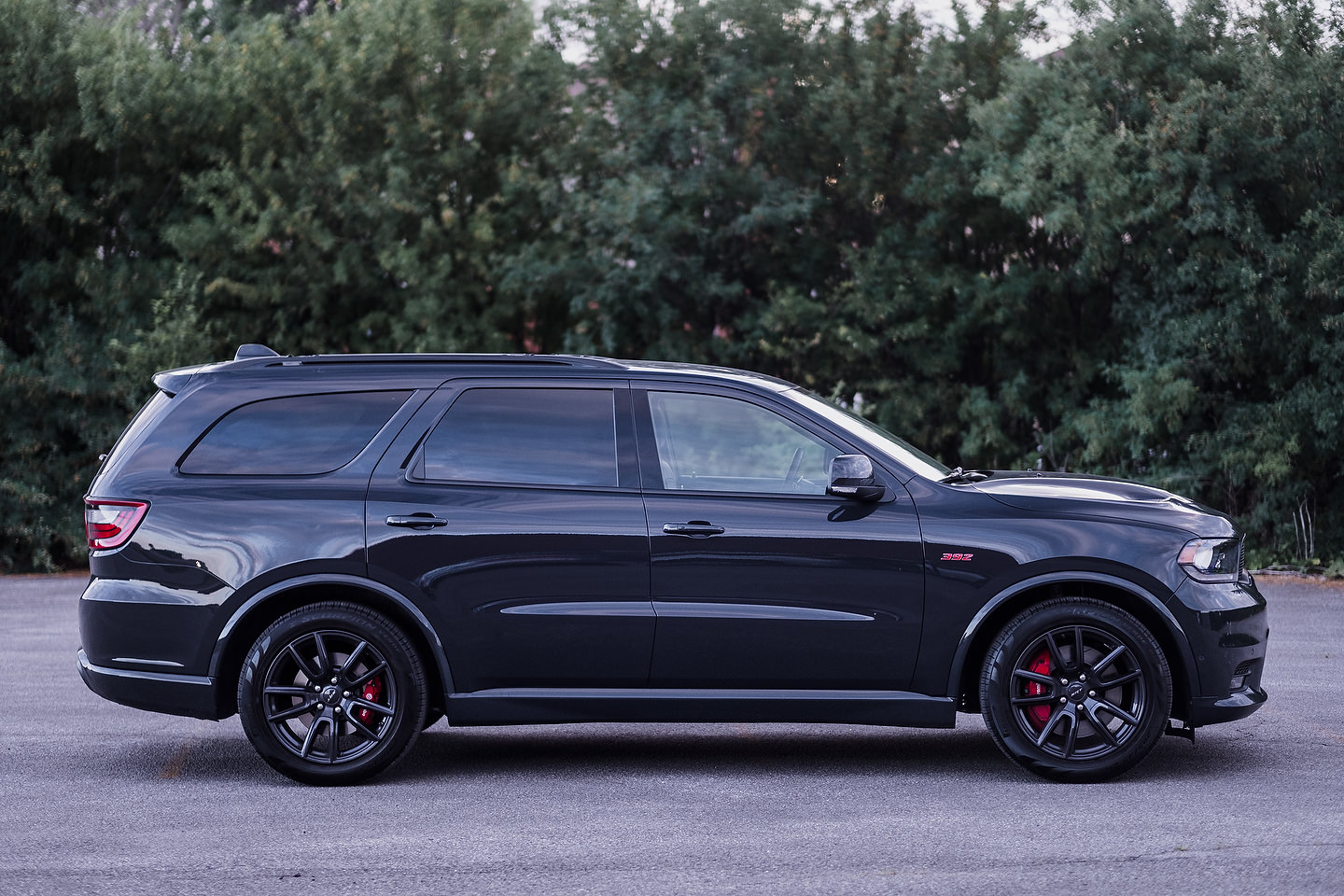 The base SXT starts at $44,845. Included are the 3.6-litre V6, Uconnect, 7-inch cluster display, Apple CarPlay and Android Auto, Bluetooth, satellite radio, and much more.

For an extra $13k, the Citadel is the luxury SUV version that requires only a fancier badge on the grille to compare with Lincolns or Caddies. The GT is the middle ground at $49,845. The 5.7-litre HEMI is a $2,900 option and with options for about $54,000, it turns out to be the smartest option.

About my SRT, it included the 2nd row console, trailer and technology groups, rear entertainment and Laguna leather for a total of just shy of $81,000. I’d do it. In a heartbeat.

Unnecessary is how many would describe the 2018 Dodge Durango SRT. I would define it as a missed opportunity to those that are shopping an SUV in the $70k+ price bracket. Granted, it’s not everyone’s cup of tea and crumpets on a porch in the English countryside. It’s more like a full-blown Metallica concert every time you press the Start/Stop button. At least, this is what is was like for me. I only got a week with it. I partied hard as though I was in the Whiskey in the Jar video. 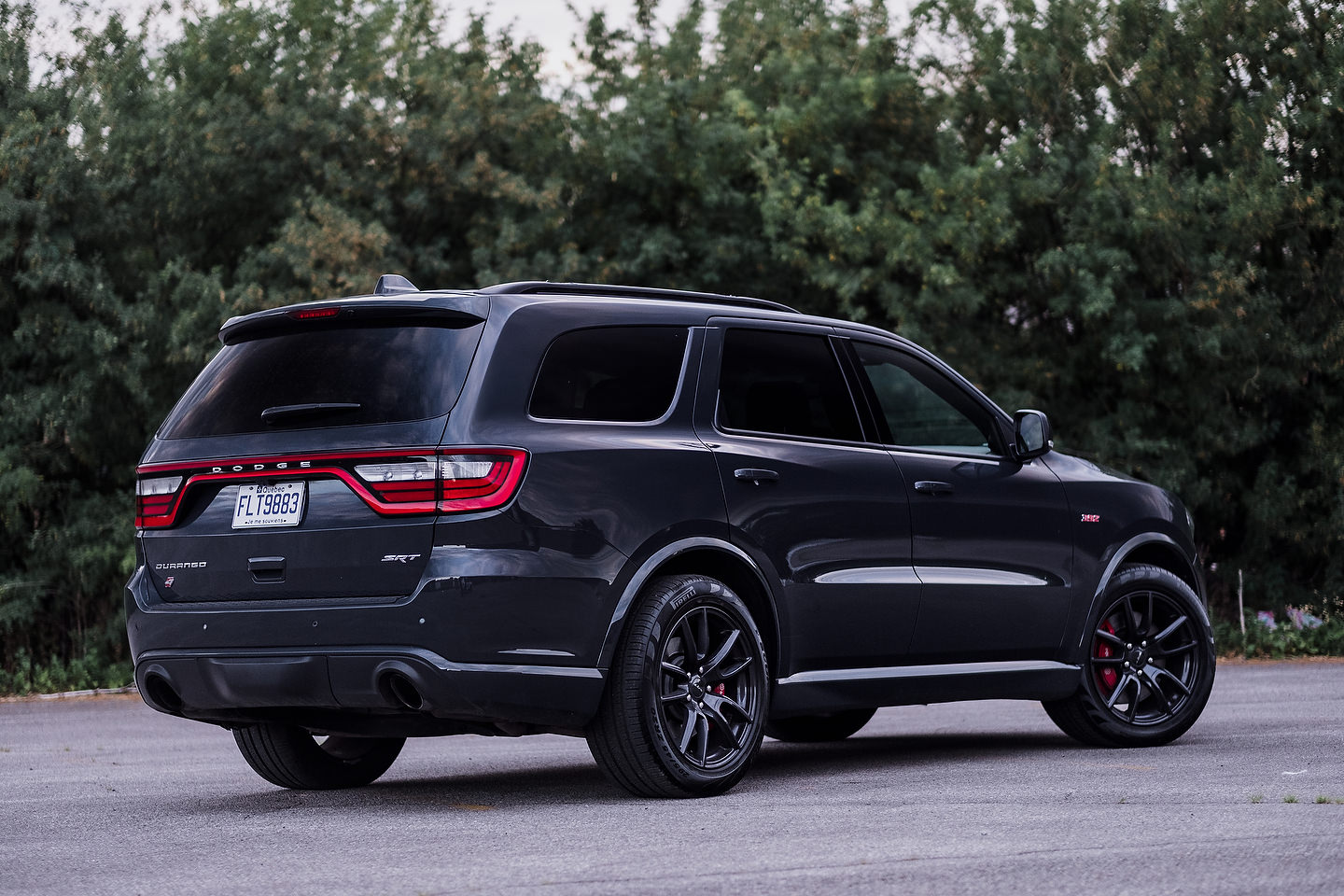 The bait, the piece-de-résistance, is the 392-cubic-inch 6.4-litre V8. This pushrod overhead-valve engine is about as wrong and right as they get. It develops 475-horsewpoer at 6,000 rpm and 470 lb.-ft. of torque at 4,300 rpm. It is loud, unapologetically angry and fantastically powerful. Well, it is but it has the unenviable job of shuffling 2,505 kg (5,510 lbs.) around as a full-time job but it does it with hell’s fury. The 8-speed automatic transmission is a fantastic tool, always playing along and never hesitating to drop a few cogs when the right foot wants more Battery.

The Durango SRT is a serious driving tool. Dodge did not simply drop a honking V8 under the bonnet and call it a day. There’s an “SRT” button that means business with seven pre-set available modes such as “Sport”, “Auto” and “Track.” These drive modes control a number of components including the Bilstein adaptive dampers, steering assistance, and a new performance-tuned AWD system. The latter has settings that will hold a 50/50 torque split or send 70% of the power to the rear for a more dynamically response drive. And the exhaust! It’s like the machine-gun riffs in One!

All of this allows the 2018 Dodge Durango SRT to reach 100 km/h in 4.5 seconds which near as much makes no sense. Also, should you decide to go to the drags, the truck holds a National Hot Rod Association (NHRA)–certified 1/4-mile time of 12.9 seconds. It’s like Ride the Lightning… On top of it all, the Durango SRT can tow up to 8,700 lbs. or, in other words, your slower track car.

My drive would involve hitting the SRT button, selecting the “custom” mode with almost everything set to Sport save for the dampers left in Auto. The ride quality was impressively cosseting for all aboard. At any given moment, I could always drop it like it’s hot and know that the standard 6-piston front and 4-piston rear Brembo brakes would firmly return the truck to the right side of the law. The Durango actually handles far better than its size suggests. The first onramp requires trust but by the second one, you’ll be going faster.

I seriously miss this truck. It did absolutely everything I could ask of it and it pleased the wife and I with its distinctive character and serious performance. Straight up, I’d opt for it over a Mercedes GLS, an Audi Q7, BMW X7 or anything else with three rows. The new Porsche Cayenne would make me hesitate for a moment… I have been a Metallica fan for more than 30 years after all.

Do me a personal favour and check out the first minute of my little video, if only for the sound at the beginning and between 45 and 55 seconds.