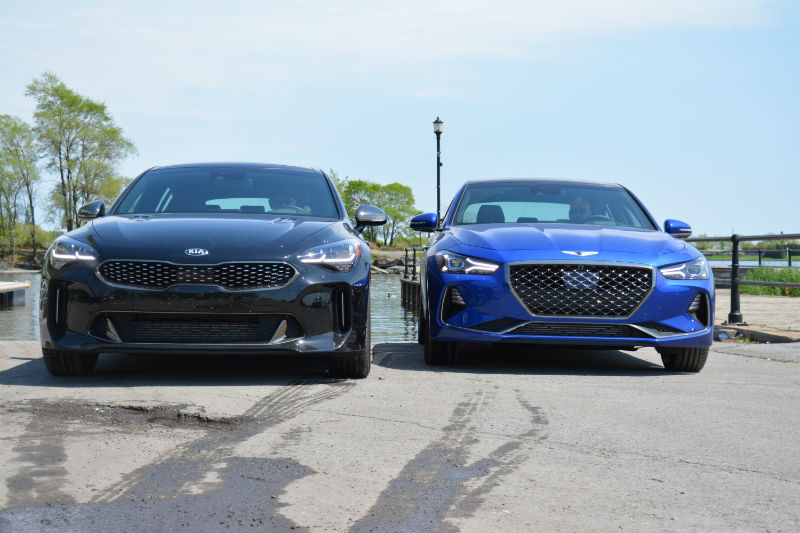 I may have returned the cars a few weeks ago but the questions are still coming in. The questions, mind you, generally revolve around the Kia. This is to be expected as Genesis as a brand remains relatively unknown. There’s also the fact that Kia’s made quite the splash with their bargain luxury performance grand touring car slayer.

Truth be told, I’ve now driven the Stinger GT on two occasions and I’ve nowhere near had my fill of it yet. It’s sheer presence on the road, although there are essentially none on the roads, draws attention. The Genesis G70, on the other hand, not that there are any more of them on the road, would nearly always drive by unnoticed.

What’s most impressive about these two cars is how different they are, despite relying on quite nearly the exact same ingredients. It’s like if the Colonel used the same 11 herbs and spices but came up with two very distinct flavours. Hats off to both Kia and Genesis for jobs equally well done.

The cars, however, are not equal. Let’s get right into the thick of things and address the second largest differentiation, after the outer shells, between these two cars. 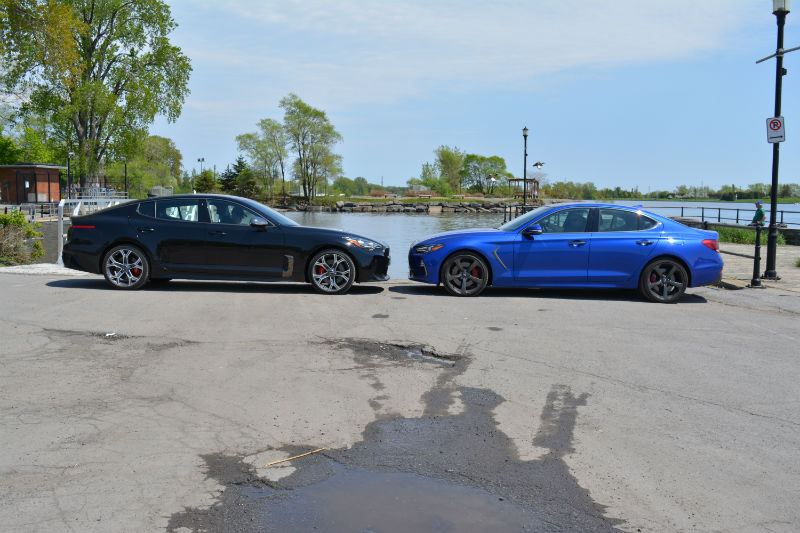 The Kia Stinger GT’s driving characteristics are right there in its name. This Grand Touring automobile is built for spirited jaunts on the highway in comfort however it will not shy away from the occasional series of switchbacks on your favorite country road. It’s been designed as a road companion with a few talents.

The Genesis G70’s got the BMW 3 Series square in its crosshairs. That’s the deal with the G70. This car may share suspension designs with the Stinger, but it is very happy when pushed hard. The chassis’ dynamics are setup to keep up with the best in the segment and it is, without a doubt, truly gifted.

The Gen’s further tuning can make it just as compliant over ugly roads as the Stinger however the latter cannot maintain the same pace at higher rates of speeds through sinuous mountain roads, for example. Although this reads like a fault, I find the Kia’s pitch and roll endearing – it’s real driving.

Both provide better than decent steering feel, for what their type of cars, with good precision. And excellent braking performance. 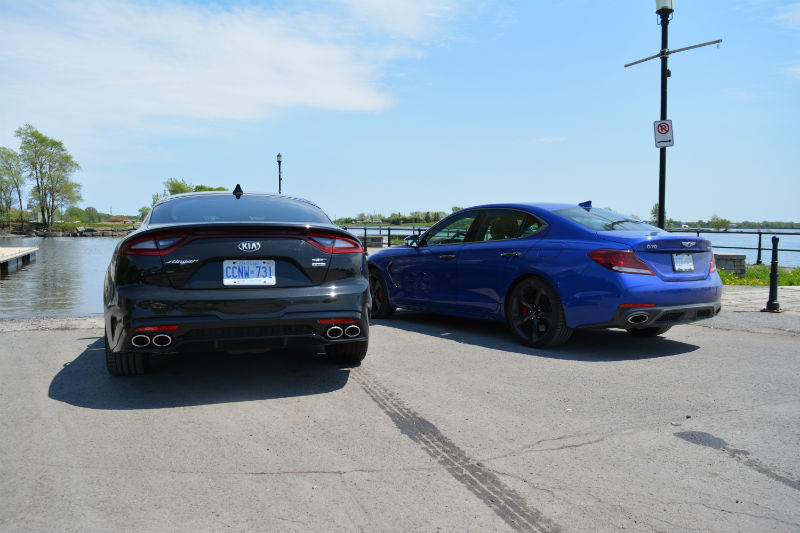 On paper, and in reality, the Genesis G70 and Kia Stinger GT are both quick cars. A launch control mode allows the G70 to hit 100 km/h in just over 5 seconds while the heavier Stinger requires an extra 3 or 4 tenths of a second to reach the same speed. There are no weaknesses in this drivetrain other than the occasional glitch in the transmission – more than once, and no matter how much pressure was applied to the throttle while in Sport drive mode, the transmission would take far too much time to do its thing. This seemed to occur more often in the Genesis.

As I’ve said, the Kia Stinger GT is a cut above styling-wise. That is not to say that the Genesis is a dud but the G70 is subtler, more German-like, despite the attempts at spicing things up. The dark chrome accents and black 19” wheels work but the aggressive be-jeweled-like front grille is too much. I actually prefer the basic non-Sport Package cars as they look more elegant, as though they’re not trying as hard to be noticed. What is does have going for it here is its size. Its tauter outer dimensions remind me of a 15-20 year old BMW 3 Series and all the goodness that came with the car at the time. 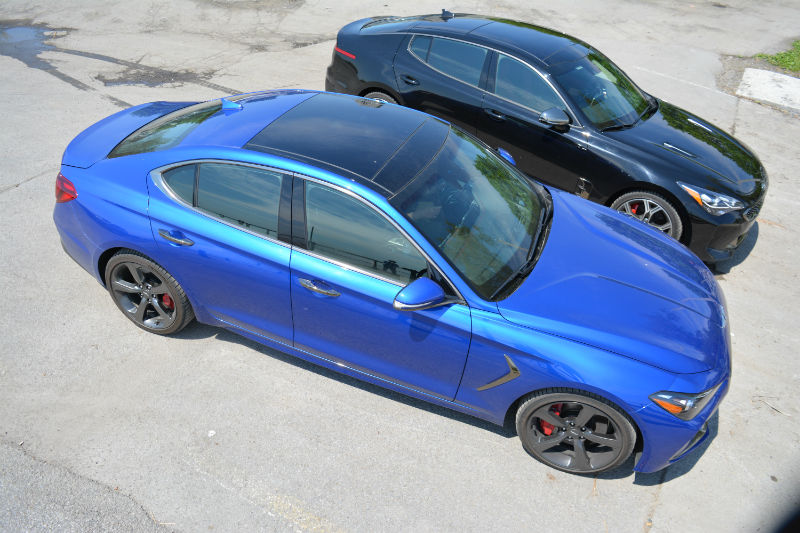 The Kia Stinger GT could be painted beige with hubcaps and it would still not go unnoticed. In fact, only Thunder Grey robs the car of some of its physical thunder. That, and the standard across the board 19” wheels. I’ve seen some after-market units on some SEMA concept Stingers and, oh my, yes! Honestly, if “Kia” is the issue, you can always remove all the badges too. The car’s 5-door hatchback body configuration almost makes seem semi-exotic. I kid you not.

This is where the price difference and different market positions really come to light. The 2018 Kia Stinger GT is a serious value leader among pricier cars, with a base price over $40k. The Stinger might be a bargain, but the seats and steering wheel showcase how serious Kia is about their new flagship car. There are a few elements that belie the car’s humbler origins such as the glossy black plastic switchgear and the vast central plastic portion of the dashboard that holds the three circular vents. Beyond these two very minor annoyances, everything is positioned exactly where it should be. 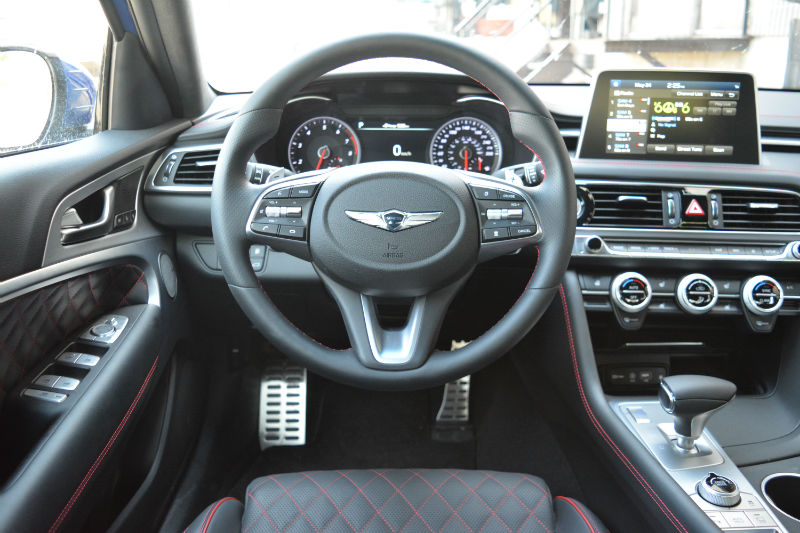 The 2018 Genesis G70 wins this portion of the face-off, without hesitation. The dashboard oozes elegance, lovely materials and a serious flair for the prettier things in life. Genesis left nothing to chance; in a “blind” interior review test by potential luxury car buyers, most if not all would guess that they were sitting in an Audi. The switchgear is lovely and luxurious to the touch. Details like quilted Nappa leather and real contrast stitching on the dashboard make it a true luxury car.

Equipment-wise, both cars offer everything and more. Neither car is lacking in any way with a naughty-nice-length list of standard and available features. The sole shortcoming as far as interiors go is the G70’s snug rear quarters and nearly miniscule boot – these are only faults if you don’t check them out before signing for the car.

At $42k, the G70 (and the $44k Stinger) include Android Auto and Apple CarPlay, Bluetooth, LED lights, power sunroof, leather, satellite radio, and power lumbar support. None of these features are standard with the more expensive BMW.

Yes, a resounding yes. Most consumers will opt for a 36- or 48-month lease on a lesser trimmed Audi A4 or BMW 3 Series for the key-fob. I get it and it’s a tiny portion of the reason as to why I would select the Kia Stinger GT over the Genesis G70. 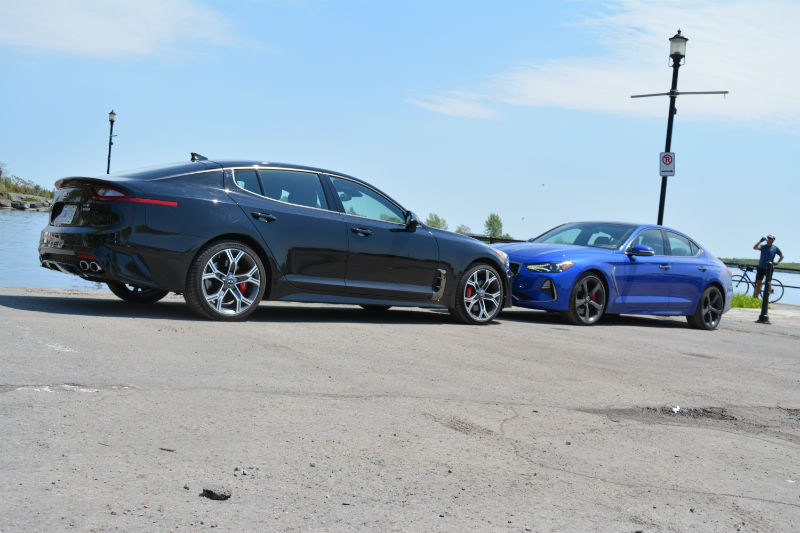 You’ll always surprise or impress with a Kia, especially with this brilliant automobile. The Genesis brand will take a while to get the proper attention and respect it deserves. You’ll only get respect for your Kia from those that know and from those who learn a valuable lesson once you take them for a spin, but that will be fun.

The big Kia’s impact on the car industry is far greater than the number of Stingers we’ll ever see on the road. Its uniqueness and unpretentious demeanor are genuinely attractive. If it was up to me, I’d slap a proper set of wheels, remove the Kia badges and enjoy a wonderful luxurious, comfortable, stylish, affordable and fast car I’d be proud to call my own.