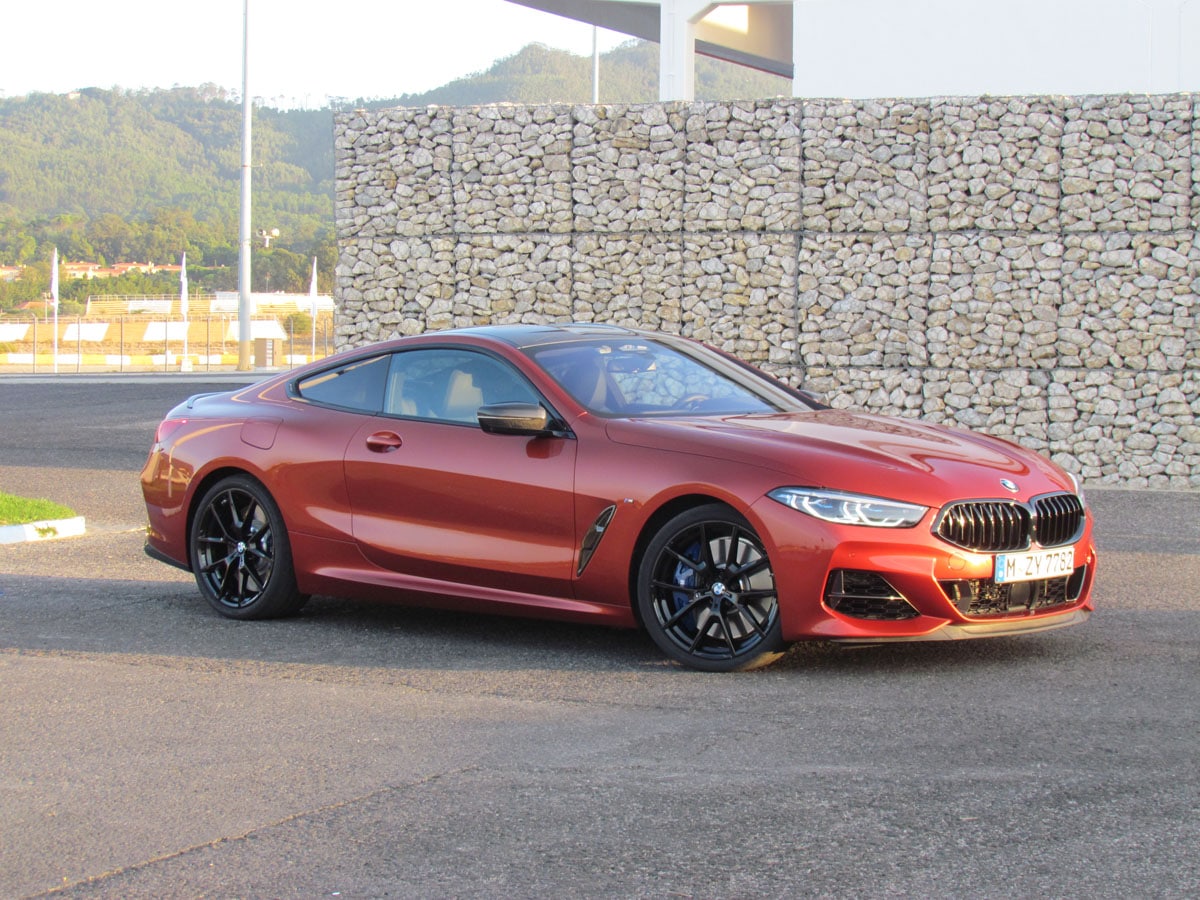 LISBON, Portugal – The 2019 BMW M850i xDrive Coupe poses a stylishly aggressive and stunning silhouette. Sure, its elongated, bulbous hood, sloping roofline and short trunk conjure images of the modern variation of the iconic Mustang. But this is no Mustang. Unlike the American pony car, this German muscle car is injected with a heavy dose of luxury and technology and follows that up with a serious dose of power.

The M850i is the first of a handful of all-new 8 Series models BMW will launch over the next couple of years. Other models will include a convertible, a Gran Coupé, and a trio of high-performance M8 models. If you’ve been following your 8s you’ll know that the last 8 series to leave the factory floor did so two decades ago.

BMW ended that two-decade hiatus with the launch of the new M850i in Lisbon, where it was tested along appropriately sinuous roads. Some track time was also scheduled at Autodromo do Estoril, where the car showcased its stellar handling unhindered by speed limits and traffic.

Under the hood is a 4.4-litre twin-turbo V8 that mates to a very slick-shifting eight-speed automatic driving all four wheels. The engine claims 523 horsepower and 553-lb.-ft. of torque, allowing the car to sprint from zero to 100 km/h in 3.7 seconds. 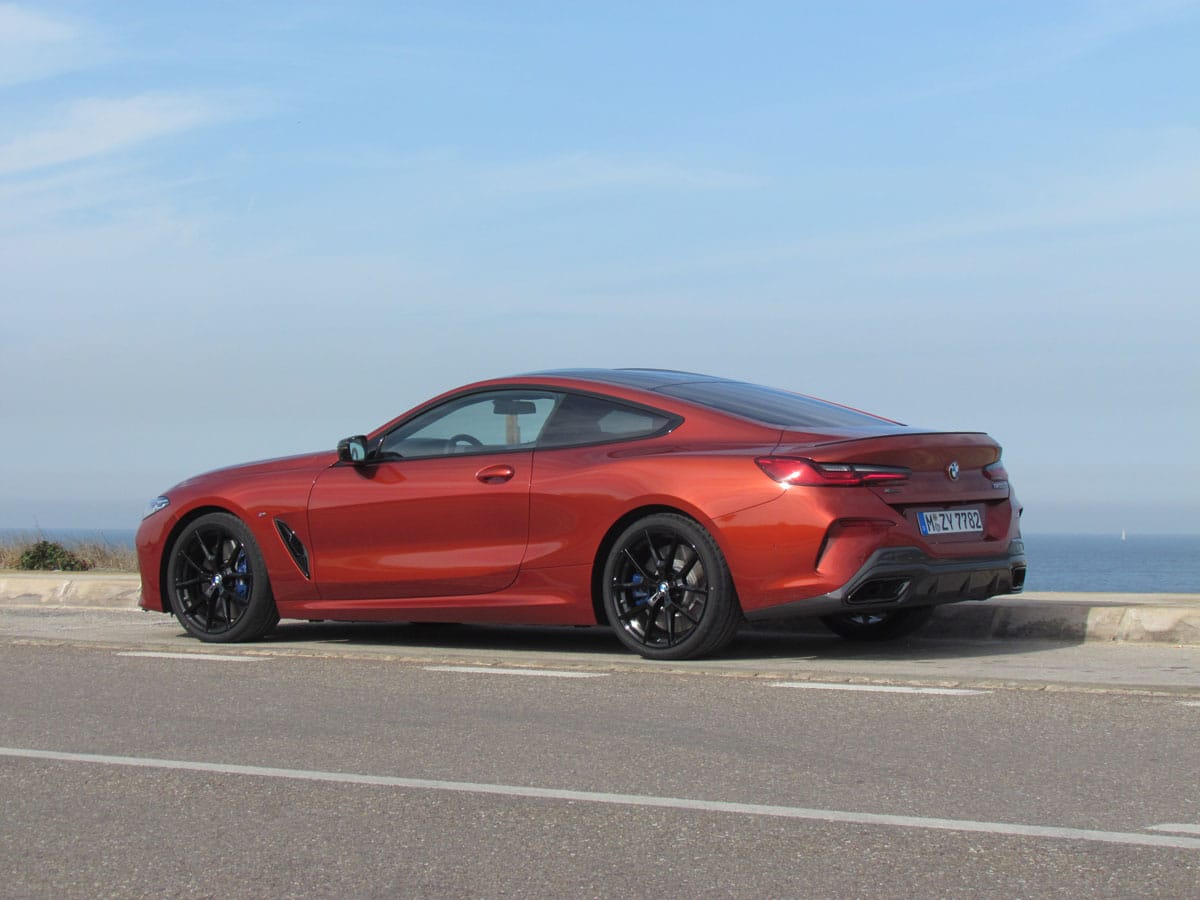 North American drivers may benefit from even more power, because according to 8 Series product manager, Sarah Lessmann, cars on this side of the Atlantic need not be equipped with Euro-mandated particulate filters in the exhaust system, which means the can get up to 30 bonus ponies. The omission of these items is also said to boost the car’s already throaty exhaust note.

While the interior is by no means unpleasant or bland, the design doesn’t exude the inviting warmth you’ll find inside an Audi. The quality and feel of the leather and other materials are absolutely premium, however.

The instruments and controls are logically laid out though, and the front seats are supremely comfortable and highly adjustable, while offering track-worthy lateral support. Some nice touches, if somewhat slightly out of place in a sporty coupe, are the optional glass gearshift knob, start button and volume dial.

While the M850i theoretically seats four, it is essentially a two-seater with rear seats added, perhaps to justify its purchase to a spouse. Rear seating is very cramped for the legs and head, probably even for adolescents. The seatbacks do fold flat to expose a relatively large trunk with 420 litres of cargo capacity.

The iDrive system has been revised, now displaying a series of buttons in a sidebar on the left of the central 10.25-inch touchscreen, thus leaving the rest of the screen free to display navigational, infotainment and car setting info. The screen is configurable, and you can swipe between different windows.

The instrument cluster is all new and all digital. The dials for the speedometer and tachometer are not round and are a bit difficult to read, though info is redundantly displayed in the centre of the instruments if you choose so, as well in the standard heads-up display. 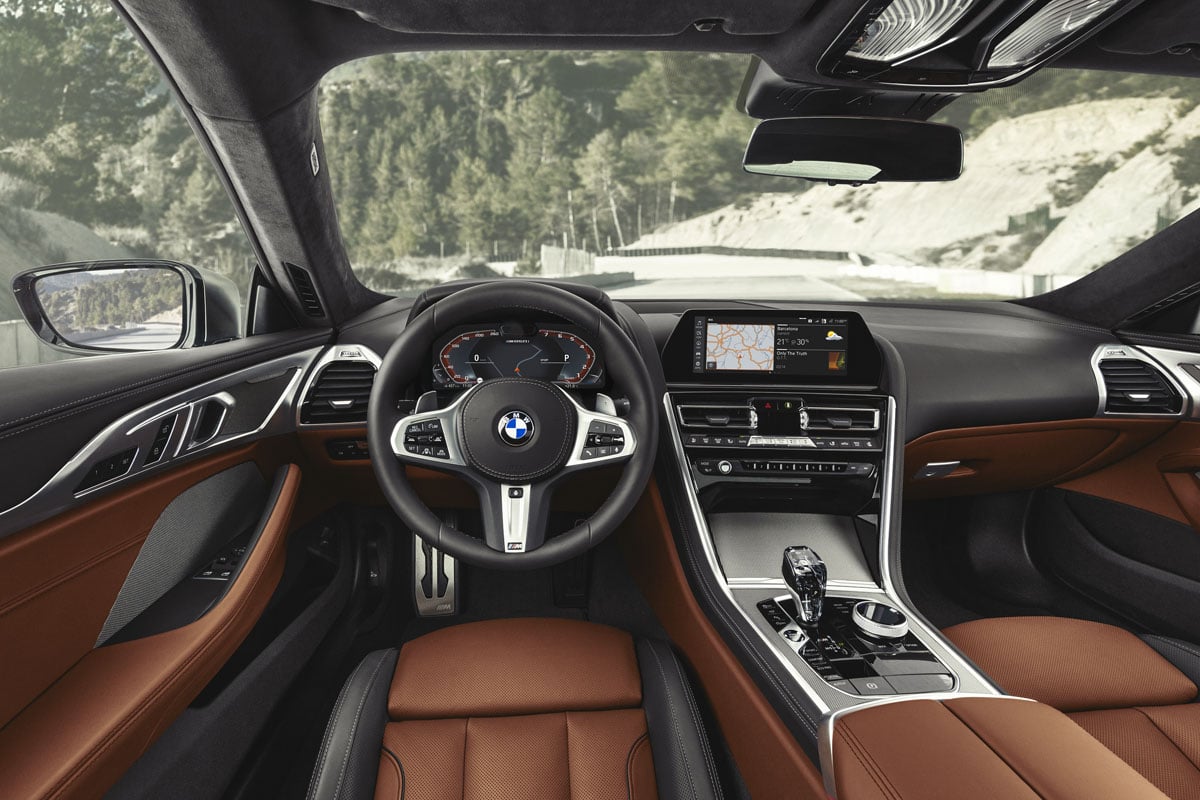 On the road the M850i is quiet and smooth, and very becoming of a luxury coupe, aside from its firm ride, even when in Comfort mode. The ride is nonetheless refined and compliant, with only some jolts making it into the cabin when hitting sharp bumps, though this is probably due to its low-profile 20-inch run-flat tires. The suspension firms up considerably in Sport mode, which prompts a switch to Comfort mode on the road, even at a quick pace, which it handles sublimely.

The engine is wonderful, exuding a docile and smooth character when roaming quietly around town in Comfort mode, and switching to a snarling brute when you hammer it in Sport mode along your favourite back road. Exhaust sound is deep and throaty, though it is enhanced through the sound system in the cabin in Sport and Sport Plus modes, which some might find gadgetty.

The M850i proves astoundingly quick around Estoril, despite a recent resurfacing of the track that has reduced traction noticeably. The 2,031-kg coupe doesn’t really respond well to a forceful, point-and-shoot approach to track driving, but rather rewards you with surprising speed when you drive smoothly, with fluid steering and braking inputs. A sloppy approach will induce understeer, though pushing down on the throttle when this happens allows the electronics to do their thing and send the front end back in the desired direction.

Cornering is enhanced by an electronically controlled limited-slip differential, as well as rear wheels that offer up to 2.5-degrees of steering. In Sport Plus mode the firmly set suspension and taut chassis keep body roll well in check, while the safety net provided by the stability control system is loosened enough to allow sufficient wheelspin to make corner exits exciting without the fear of losing control. 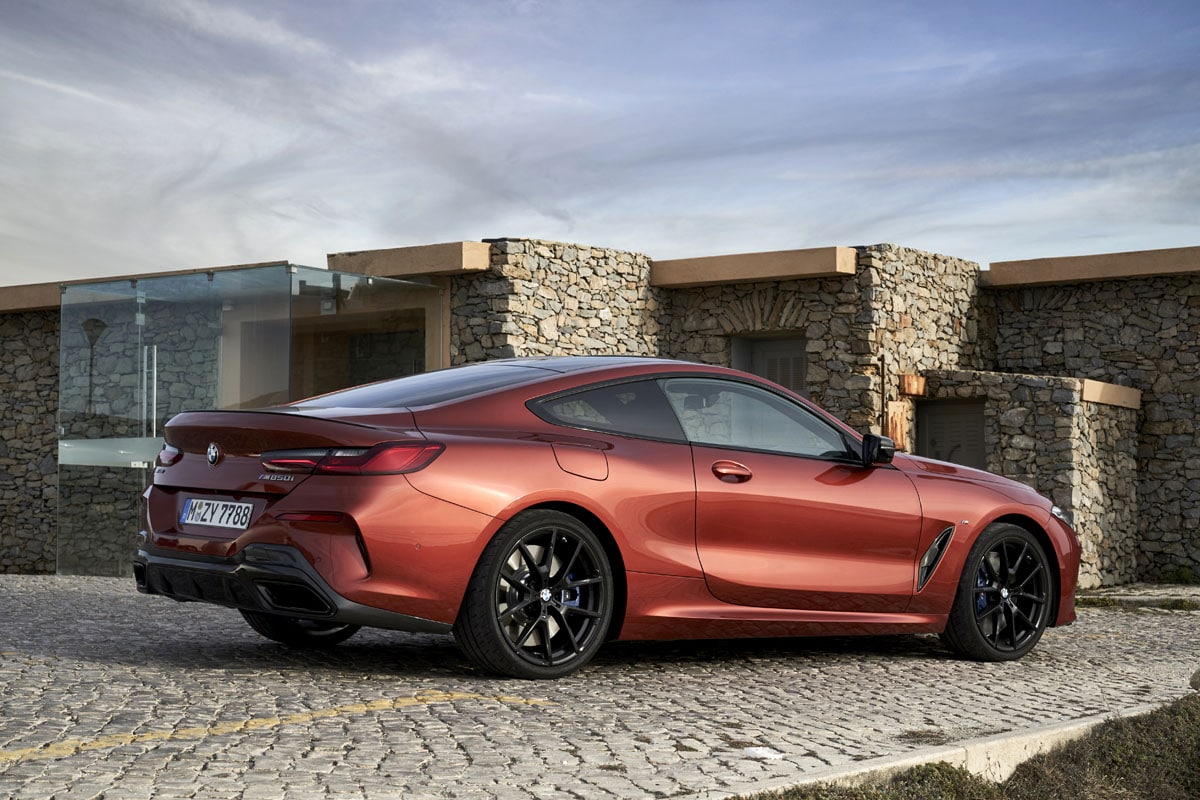 The brakes are surprisingly strong and exhibit no fade after six laps on a track that requires heavy braking from high speeds. And did I mention the M850i is seriously fast? It easily keeps pace with a BMW M5 lead car while running flat-out along Estoril’s kilometre-long front straight.

All of this high performance is, of course, supported by an extensive suite of standard and available driver aids, which include active stop-and-go cruise control, the aforementioned lane-keep assist, automatic braking, side-collision protection to reduce the likelihood of a collision with a vehicle approaching in an adjacent lane, pedestrian detection, rear cross-traffic alert and several other safety and convenience assists.

The $123,500 BMW M850i is not a practical car, but it probably won’t be the only car in the household garage, anyway. It is, however, a car that combines a seductively elegant silhouette with hardcore performance and handling, in a package that exudes a commanding presence whether it’s parked outside a posh restaurant or ripping up the tarmac on a closed course.

The new BMW 8 Series is the car no one asked for, but the German automaker decided to make anyway. Now that this upscale, high-performance coupe does exist, you’ll wonder why BMW didn’t follow up with the second generation sooner. It arrives at dealers this December.

Latest Accord comes with Google built-in Offers hybrid and gas power The 2023 Honda Accord sedan is getting ready to arrive at dealers in...
Read more
Previous article4-door Chevrolet Corvette is a Thing and it’s for Sale
Next articlePlease Subaru, Bring Back A Hot Hatch!