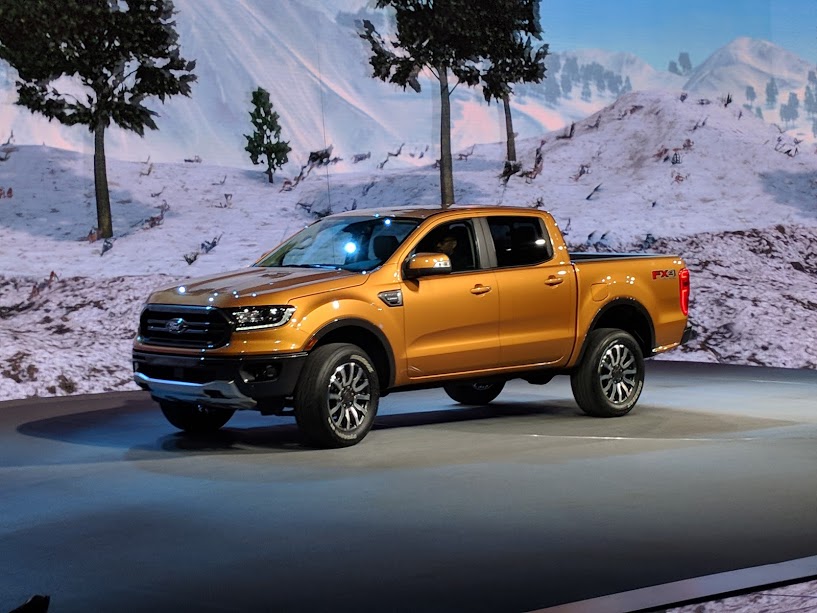 It’s finally here. Ford may not have a press conference at this year’s North American International Auto Show in Detroit, but it did host an event last night where it unveiled three models, one of which we’ve been waiting on for a while now. It’s the 2019 Ford Ranger, and it’s about time Ford offered it in the most important truck market in the world.

That said, we can’t really blame Ford for holding back on bringing the Ranger to North America. Before GM redesigned the Canyon and Colorado, and Toyota updated its Tacoma after 10 years, there really wasn’t much going in the mid-size pickup segment. Well that’s changed now, and it’s the right time to introduce the Ranger. And Ford’s going to sell a ton of them.

It looks like a Ford F-150 that was left a little too long in the dryer, and yet it also has a distinctive design that will make it easy to recognize out on the road. It looks tougher and stronger than a Colorado or Canyon, and it’s more refined than a Tacoma, at least in my eyes.

It will be powered by a 2.3-liter EcoBoost four-cylinder engine, but we don’t know anything about power or towing capacity just yet. We do know that it will be paired with a segment-exclusive 10-speed automatic transmission.

We do know that it will come in three versions and there will be a FX4 off-road package as well. That package includes underbody protection, more rugged shocks, off-road suspension and tires that like to swim in the mud.

There’s a system called Trail Control that essentially acts as an adaptive cruise control system but for off-road driving by adjusting braking and accelerating while you focus on not hitting those stumps, and a Terrain Management system that adjusts various components in order to get the very best performance on snow, gravel, sand and the like.

All-wheel drive will be available with 2-high, 4-high, and 4-low modes, and an electronic-locking differential is standard on FX4 models, and available on other versions.

A wide range of active safety systems are standard or optional. These include features such as lane keep assist, lane departure warning, a reverse sensing system, blind spot monitoring, pre-collision assist with pedestrian detection, adaptive cruise control, and automatic braking. A wide range of USB ports and AC power outlets will be in the Ranger, as will 4G LTE Wi-Fi.

The 2019 Ford Ranger is hitting the market at the right time. If it’s priced right, Ford won’t have any trouble selling every single one they bring to North America.

The North American Car and Truck of the Year awards are the most prestigious on the continent. Honda and Ford are this year’s...
Read more

The Sad State Of Affairs At The 2019 Detroit Auto Show

The Detroit Auto Show was once the greatest of its kind. A quick glance at the show floor plan tells a different story. As we...
Read more
Auto Shows & Events

“If it works, don’t fix it”. A short phrase that definitely applies to the looks of the Mercedes-Benz G-Class. This exclusive truck has been...
Read more
Auto Shows & Events

GAC Motor is planning for its future in North America This is not the first time that a Chinese automaker rents out some floor space...
Read more
Auto Shows & Events

Honda is clearly seeing green. After the launch of the Clarity last year, the Japanese manufacturer is now bringing back the Insight nameplate, and...
Read more
Auto Shows & Events

A lot of this year’s unveilings in Detroit were known prior to the show, but this one wasn’t. Nissan had teased his latest rugged...
Read more
Auto Shows & Events

The 2018 Detroit Auto Show will be remembered as the one where Ford, Ram and Chevrolet unveiled their newest pickup trucks. If there’s a...
Read more