2019 Ford Ranger Preview: This Is Big

The 2019 Ford Ranger was a big deal when it was unveiled last January at the North American International Auto Show, and it’s still a big deal now as we get set to drive it for the first time. We’re headed to sunny San Diego next week to review the new Ranger, the latest model to enter the booming mid-size pickup segment.

Ford stopped producing the Ranger for our market back in 2011 when consumers were losing interest in small trucks. Now, they are bringing it back just in time to take on a redesigned Toyota Tacoma, an aging Nissan Frontier, and GM’s Chevrolet Colorado/GMC Canyon duo that can partly be credited with their segment’s revival.

One EcoBoost engine with more power than the competition

As far as pickups go, the 2019 Ranger will be fairly straightforward. One engine, one gearbox, and a handful of versions. An optional FX4 Off-Road package will include rugged tires, protective skid plates, appropriate shocks and a Terrain Management System to adjust the various mechanical component settings appropriately for off-road adventures. 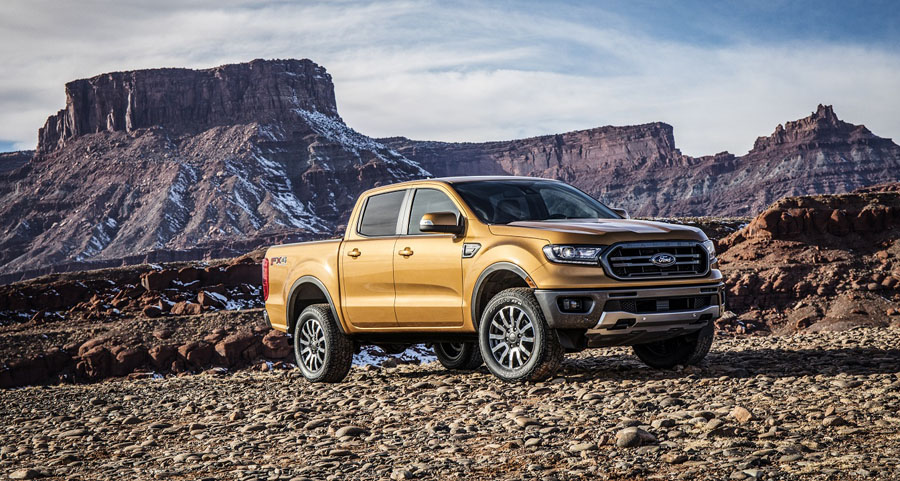 Similar to the system found in the F-150 Raptor, this system has four unique drive modes that adapt the ranger to either, snow, mud, gravel, grass, sand or normal roads.
Another technology found in the FX4 package is the Trail Control system which is essentially a cruise control system for off-road trails. Once engaged, all the driver has to manage is steering while Trail Control handles throttle and brakes. When equipped with four-wheel drive, the Ranger will offer 2-high, 4-high, and 4-low modes.

Powering the 2019 Ford Ranger is a 2.3-liter EcoBoost four-cylinder engine paired with a 10-speed automatic gearbox. It develops 270 horsepower and 310 pound-feet of torque, more than any other mid-size pickup offered right now. Towing is rated at 7,500 pounds and payload is rated at 1,860 pounds.

That’s what we know so far. We’ll be able to give you more information after we’ve driven it next week.

Station wagons, convertibles, and some two-door coupes will be the first to go. Expect more high-end AMG and Maybach models, and more. Many automakers...
Read more
Previous article10 Pre-Owned Honda Civic Deals in Toronto – December
Next articleShould You Buy a 2019 Subaru Forester?