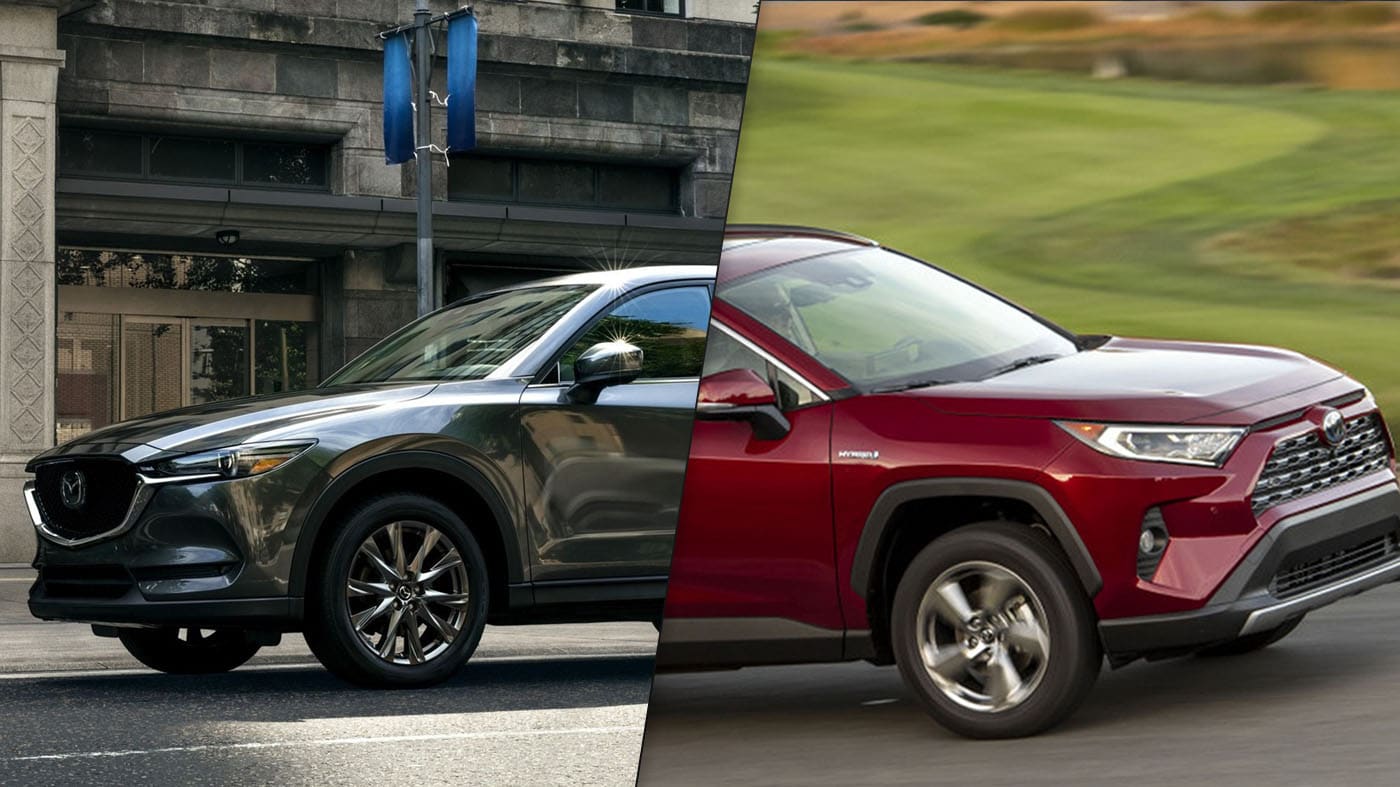 If you’re in the market for a compact sport utility vehicle, you’ll likely have the Toyota RAV4 and the Mazda CX-5 on your list.

In this segment, the Toyota RAV4 is king. Although the Mazda CX-5 is further down the list sales-wise, it is in our books one of the best options among the many members of the category.

In Canada in 2018, the Toyota RAV4 took top honors as the best seller in the compact SUV segment. What’s impressive is that this was the third time in a row that the RAV4 was number one. And more importantly now, an all-new RAV4 has surfaced for the 2019 model year. The Mazda CX-5 comes in 6th but in many respects, it is one of the most rewarding to drive and most upscale among the affordable crossovers for sale in Canada.

This might very well turn out to be the tightest comparison we’ve put together thus far. Read on:

Specification-wise, these two vehicles are incredibly alike. Both feature, as basic equipment, a normally-aspirated 2.5-litre 4-cylinder engine. On paper, the RAV4’s 203-horsepower best the CX-5’s 187 but on the flip side, the Mazda’s 186 lb.-ft. of torque shows up 1,000 rpm ahead of the Toyota 184 lbs.

The RAV4 is provided with 8 forward gears while the CX-5 makes due with 6. All in all, from an acceleration stand-point, they’re about dead even. They’re also even in the noise department where both mills are fairly loud and buzzy.

Herein then are the major differences. The Mazda’s AWD system is far superior to that of the Toyota’s. Despite the digital cluster indicating that the rear wheels are instantly activated in slippery circumstances, the RAV4 is heavily front-wheel biased with rear-wheel assistance whereas the CX-5’s i-Activ AWD system will give a Subaru a run for its money.

Furthermore, and a sign of the times, the Mazda and Toyota (Limited and Trail) are blessed with torque vectoring. It is a brake-biased system and although they work in a similar fashion, it seems better adapted on the CX-5.

This brings us down to the final point: the Mazda’s simply that much more “dynamic” and entertaining from the driver seat. The chasm that once existed between the two on this front has however, been reduced to a small trench.

The Toyota RAV4’s extra few gears prove to be an advantage here. As both tip the scale somewhere around the 1,600 kg mark with similar power and engine displacements, the Toyota’s 9.2/7.1 L/100 km (highway/city) is appreciably better than the Mazda’s 9.8/7.9 L/100 km.

If you recall, these are so-called compact crossovers but interior dimensions tell another story.

The Mazda CX-5 provides a generous 875 litres of boot volume behind the second row. When it is stowed, the number rises to 1,687 litres.

Toyota only bothered to share one number with curious consumers and that’s 1,062 litres behind the rear bench. We figure the number doubles when it is stowed. The RAV4’s trunk is huge. Period.

Room for passengers is generous in both but once more, the Toyota gives everyone a little more wiggle room.

Like the specs, pricing structures for these two rivals are nearly identical. A base FWD RAV4 LE retails for $27,990 while a simple FWD CX-5 GS goes for $27,850.

Moving to mid-level AWD RAV4 XLE ($33,690) and AWD CX-5 GS ($32,750) trims once more sees numerous similarities between kit and pricing. From there however, the Toyota takes a more expensive turn. The $40,690 RAV4 Limited has no real advantages over the $37,450 CX-5 GT. The Mazda does not suffer less technology, although the displays are far less high-end, fewer safety or luxury features.

The other differences come from the fact that a RAV4 hybrid is available. Conversely, a CX-5 Signature with a turbocharged 227-horsepower and 310 lb.-ft. of torque engine can be selected.

In the top 10 best-sellers in the segment last year, numbers 1 (RAV4), 6 (CX-5) , 7 (Jeep Wrangler) and 9 (Jeep Cherokee) are some of our favorites. With the exception of the last one, we have no trouble recommending these vehicles – there’s no alternative to the Jeep Wrangler, so that’s that.

The Toyota RAV4 has been a safe bet for 20+ years. There’s nothing much else to add to that.

Mazda vehicles are also reliable but do not benefit from the same long-running reputation for dependability and durability. Having said that, it’s still a fantastic utility vehicle.

As you can see by the result of this comparison test, it’s a tie. The final answer comes down to where the products sit historically. If we had to pick, we’d lean towards the Toyota, if only slightly.

Tesla Model 3 Performance takes on its new (and only direct) challenger in a drag race with BMW i4 M50i The BMW i4...
Read more
Comparison

The 2022 Hyundai IONIQ 5 is one of the most anticipated new electric vehicles coming next year, and among its multiple competitors we have...
Read more