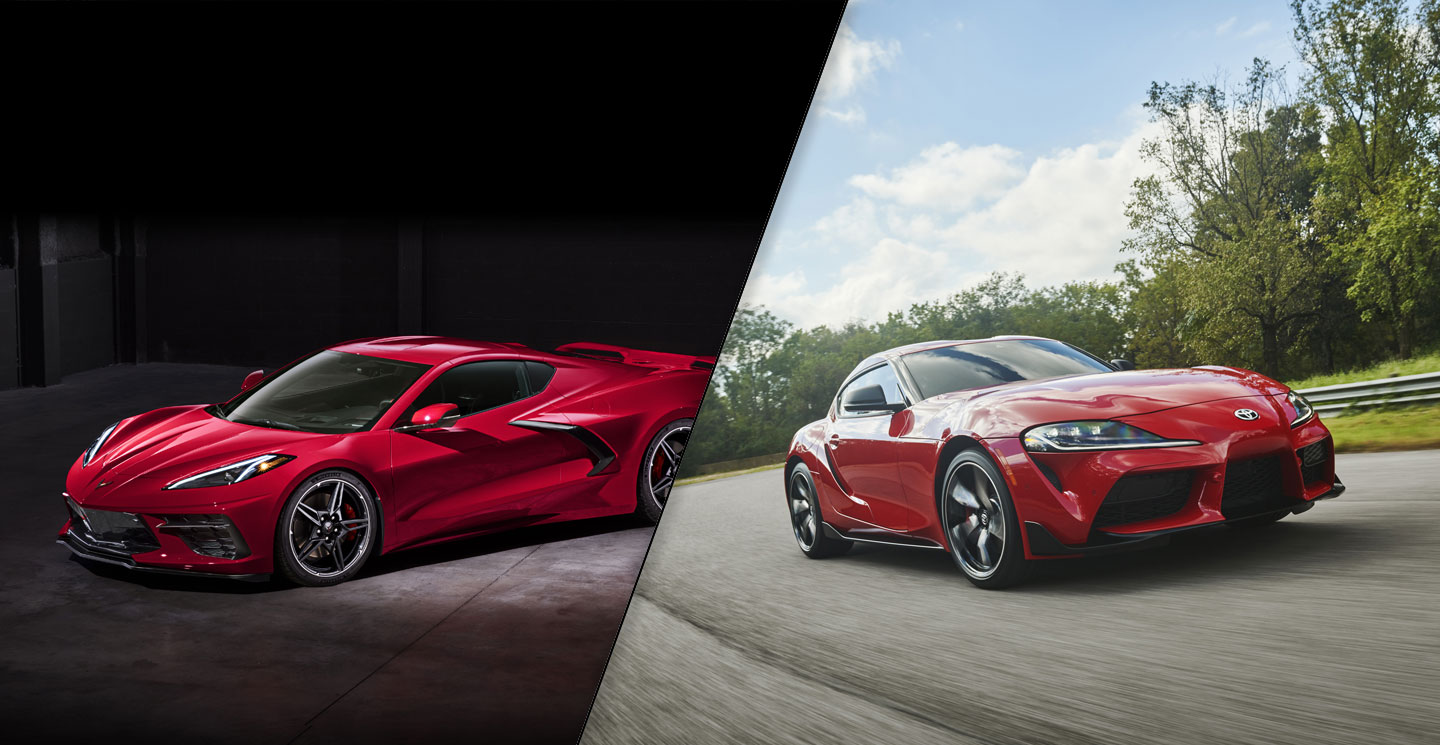 These new Corvette and Supra were among the most talked cars about in 2019. Just for fun, let’s see how they stack up.

There’s nothing to argue here. The 2020 Chevrolet Corvette and 2020 Toyota GR Supra are two of the absolute undisputed car stars of 2019 and although they are very different from each other, they’re also quite similar.

Now, odds are that if you are shopping one of these cars, you’re not likely considering the other one. BUT, fact of the matter is that these cars are part of a dwindling segment that is the sports car. Alongside the Supra and Corvette, you can look into the Chevy Camaro and Ford Mustang (Near- or top trims) and Porsche 718 Cayman. The likes of the BMW Z4, 4 Series, Audi A5, Infiniti Q60 and Lexus RC are luxury business coupes while the Nissan 370Z is way old. The Dodge Challenger fits in here somewhere but when it comes to a certain level of rawness to the drive, the first five are unique.

So, Supra or Vette? Let’s poke through some specs and see what we come up with.

What’s The Deal With These Cars?

Full disclosure: We’ve not yet driven the new C8 Chevrolet Corvette. A UAW strike and ensuing negotiations with GM somewhat delayed production which explains why everyone’s late. That being said, we’re headed to Las Vegas near the end of February to finally drive it.

The deal with the new C8 Corvette is that GM’s done what most thought was nearly impossible. While chatter about a mid-engine Corvette is decades old, it was never going to happen. Or, if it did, the Vette would no longer be an every-man’s sports car. Well, to many Corvette purists’ dismay, the 2020 C8 Corvette is mid-engine’d and very affordable. The car’s design is still somewhat controversial but according to those who’ve driven it, it’s epic.

Now, the new 2020 Toyota GR Supra, we have driven. The deal with the Supra is that it’s not a Toyota, it’s a BMW. Nearly nine months after the first drives, outlets are still getting up in arms over this fact. Fact is that had Toyota and BMW not come to terms and made this happen, there would be no Z4 and no Supra. The world would be a slower place for it. To be fair, Toyota did a fair amount of chassis tuning and made it partially their own.

What Are The Powertrains?

The Corvette is, simply put, the most powerful Stingray every produced. The all-new LT2 6.2-litre V8 engine produce 490-horsepower at 6,450 rpm and 465 lb.-ft. of torque at 5,150 rpm (add 5 to each with the Performance exhaust or Z51 Performance Package.) For the moment, only an 8-speed dual clutch transmission is available. Included in the package are a limited-slip rear differential, Brembo brakes, and offered as an option, the excellent Z51 performance suspension with Magnetic Selective Ride Control

Meanwhile, the GR Supra gets BMW’s B58 straight-6-cylinder twin-scroll turbocharged 3.0-litre which is good for, on paper at least, 335-horsepower between 5,000 and 6,500 rpm and 365 lb.-ft. of torque from 1,600 to 4,500 rpm. The only transmission, likely ever, is an 8-speed ZF automatic transmission and it sends power to the electronic rear active differential. It too sports Brembo brakes but an adaptive variable suspension is standard.

Where the Corvette is concerned, the Stingray is a 3-second 0-100km/h car (under 3 seconds 0-60mph). As for the Supra, Toyota’s specs say  4.1 seconds to 96 km/h (0-60mph) which works out to about 4.3 to 100 km/h. While we can’t confirm how fast the Vette is, although we’re convinced it’s a shredder, the Supra feels far quicker that the numbers suggest. This comes from the discovery made by a few outlets putting the A90 on a dyno and discovering that the real numbers are closer to the BMW Z4 M40i’s 381-horsepower and 385 torques.

No matter what, the Corvette will be a much faster car in a straight line, and on the track. To note, the lap times around the famed Nürburgring Nordschleife have both been revealed recently. The C8 Corvette managed an impressive 7:28.30 while the Supra managed a very respectable 7:52.17.

In the US, the scenario is significantly different. The Corvette begins at $59,995 while the Supra can be had for as little as $49,990. The Corvette’s pricing difference is quasi-normal but in the Supra’s case, the US can order one of three trims while we Canucks only get the fully loaded iteration with the sole option being colour which are far cheaper in Canada, go figure (US $395 vs. CDN $255.)

What Do We Think About All This?

We love the Toyota GR Supra and have no doubt that we will feel the same way about the latest version of America’s sports car, the Chevrolet Corvette.

What must be said here is that all we sports car enthusiasts and driving fanatics need to be thankful for these cars. Sooner than we’d like, these high-power internal combustion engine’d cars will be replaced by performance electric ones. They’ll be fast and we’ll love them too but it won’t be the same…

Long Live the C8 Corvette and the A90 GR Supra!

Lexus has previously teased images of a future electric supercar This model could be a spiritual successor to the LFA, which was discontinued...
Read more
Previous articleHyundai Recall Involves 300,000 Hyundai and Kia Vehicles in Canada
Next articleShould You Buy A 2021 Mercedes-AMG GLE 53 Coupe?

Tesla Model 3 Performance takes on its new (and only direct) challenger in a drag race with BMW i4 M50i The BMW i4...
Read more
Comparison

The 2022 Hyundai IONIQ 5 is one of the most anticipated new electric vehicles coming next year, and among its multiple competitors we have...
Read more