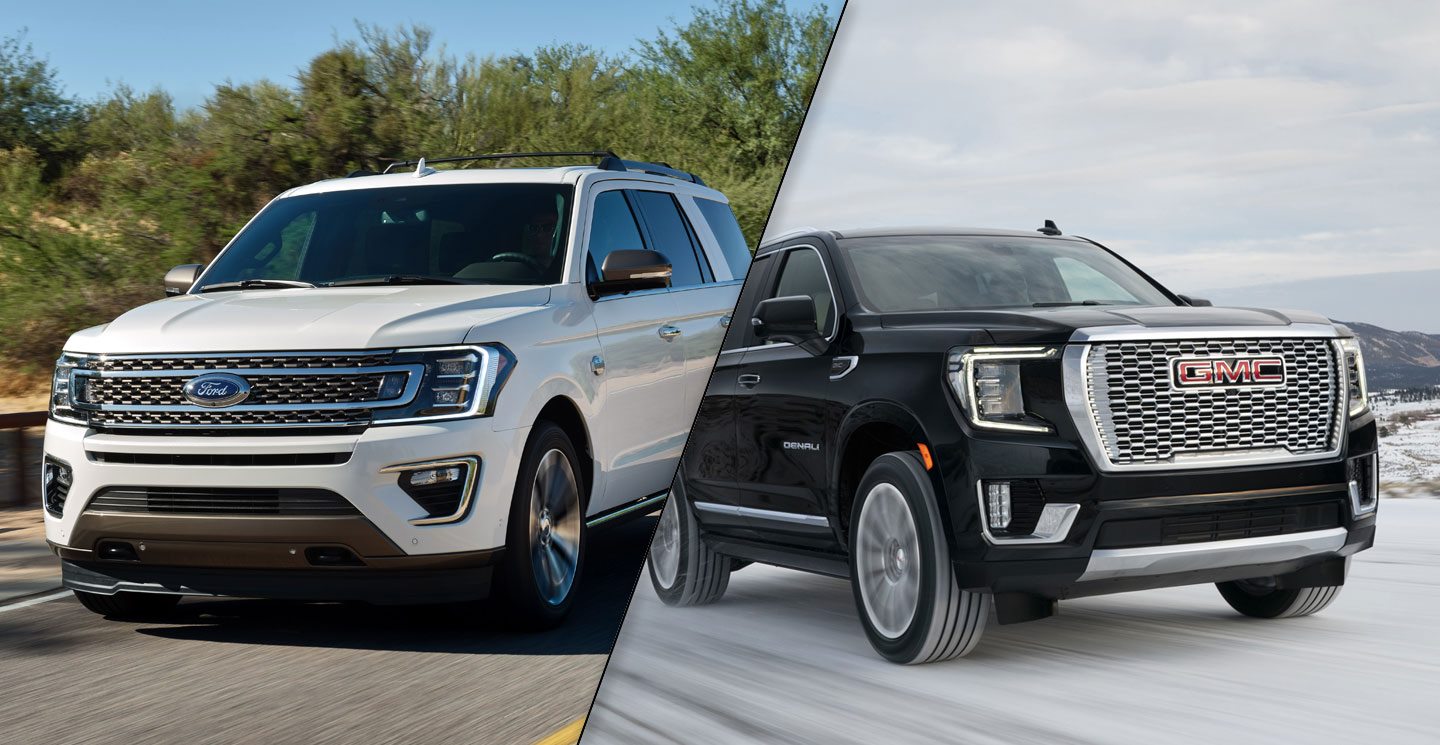 A year ago, the Ford Expedition had it. This year, the tables may have turned with the new Chevy Tahoe and GMC Yukon.

Despite the drive to go green, the desire for full-size SUVs continues to be strong. While there may be less than a handful left in the segment, competition remains immense. In fact, the latest generations of these trucks are the best ever, or so we think.

We’ve driven the new Ford Expedition and Lincoln Navigator and in short, we love the capability, the chassis tuning and the comfort. The last GM full-size trucks we drove still fared well however their age was apparent in its interior design and drivability, not to be confused with refinement.

General Motors is currently rolling out its newest generation of Chevrolet Tahoe and Suburban, and GMC Yukon and Yukon XL. And let’s not forget, an all-new Cadillac Escalade to go along with it. Although we did spend a few minutes at the wheel of the 2021 GMC Yukon, we’ll only address specifications and make a few comments here.

In this concise comparison, we’ll pit two top dogs, namely the Expedition, and for this round, the GMC Yukon.

What are the powertrain specs?

This is the area where the fewest real updates have taken place. Specifically, the Yukon can still be equipped with a 5.3-litre V8 with 355-horsepower and 383 lb.-ft. of torque or a 420-horsepower 6.2-litre V8. One of the changes is that the GMs now pair a 10-speed automatic transmission with both V8s. The biggest piece of news is that a 3.0-litre Duramax diesel engine with 277 horsepower and 460 lb.-ft. of torque (same figure as the 6.2) joins the party. It too includes a 10-speed automatic transmission.

Chassis-wise, the new Yukon (and others) now ride on a fully independent rear suspension which is upgraded to Magnetic Ride Control with an Air Ride suspension in upper trims.

The 2020 Ford Expedition carries the EcoBoost torch with a standard turbocharged 3.5-litre V6. Its 375-horsepower and 470 lb.-ft. of torque (400 and 480 respectively with Platinum) are extremely competitive. Also set up with a 10-speed autobox, this single powertrain manages to do it all.

The Ford also features a fully independent suspension although the optional load-levelling function is limited to the rear axle.

Clearly a subjective point but, although we like the Ford Expedition’s powerful road presence, the GMC Yukon is more convincing. Truth be told, we’ve never met a full-size GM SUV we did not like although we remain on the fence when it comes to the new Chevrolet Tahoe and Suburban.

The reason behind this stems from the fascia which is shared with the bluntly unattractive Silverado. Having said this, the SUVs pull it off better than the pickups. The same goes for the Yukon over the Sierra.

In the GMC’s corner is the Denali. The latter has become synonymous with robust yet refined luxury. It “out-poshes” the Ford’s Platinum trims. Same goes for the new AT4 iteration of the Yukon, which brings a rugged appearance without turning down its charm, when compared to the Ford King Ranch.

If the Ford Expedition Max and the GMC Yukon XL are more your size, the Ford’s slightly softer angles, corners and better balanced proportions give it more visual appeal.

In a new twist, the Yukon, namely the Yukon Denali, presents a more premium and appealing dash design which perfectly blends luxury in a truck-like package. In both case, the materials and the attention to detail are truly luxurious.

Which is more spacious and capable?

Is this category, size is nearly everything. For 2021, the Yukon has grown in nearly every direction and the result are noticeable. What most impresses with the GM truck is the use of the available real-estate.

The Ford’s wheelbase is still longer than the GMC’s at 3,112mm compared to 3,071. Wheelbases are identical for all intents and purposes at 5,333mm and 5,334, respectively. Although the Expedition delivers more 3rd row legroom, at 917mm over 887, cargo volumes for the GMC are massively improved.

The previous generation GM trucks suffered from its old frame and suspension design which forced the 3rd row of seats to stow in the boot as opposed to in the trunk’s floor. This is no longer the case as volume behind the 3rd now reaches 722 litres vs. the Ford’s 546 and overall, the GMC delivers 3,480 litres behind the first row compared to 2,962 litres in the Expedition.

The size and volumes advantages for the GMC also apply when comparing the Yukon XL and the Expedition Max.

Towing capacities for the GMC Yukon have not yet been shared however we suspect they will, at the very least, match the Ford’s roughly 9,000 lb capacity when properly equipped.

Much like our response when compared the 2019 Chevy Tahoe/GMC Yukon to the Ford Expedition, we’d put our money on the GM trucks.

Their newfound size, design, equipment and various technologies make them even more alluring than previously but we would note that although the new 3.0-litre Duramax diesel is both unique and powerful, we’d stay away from the costly option. The 5.3-litre is a safe bet and for extra power, the 6.2-litre is an equally good option. We’ve heard that depending on the trim, the Duramax and 6.2-litre upgrades will retail for similar amounts. In this case, we’d stick with the 5.3-litre.

Both full-size SUVs are attractive and competent but we find ourselves drawn to the GMs, especially the new 2021 GMC Yukon AT4.

The first Scout electric SUVs will be launched in 2026. The website hosts two teasers, including a new one that shows the front...
Read more
Previous articleTop 15 Unveils To Look For At The 2020 Montreal International Auto Show
Next articleNHTSA May Investigate Tesla Models Over Sudden Unintended Acceleration Issues