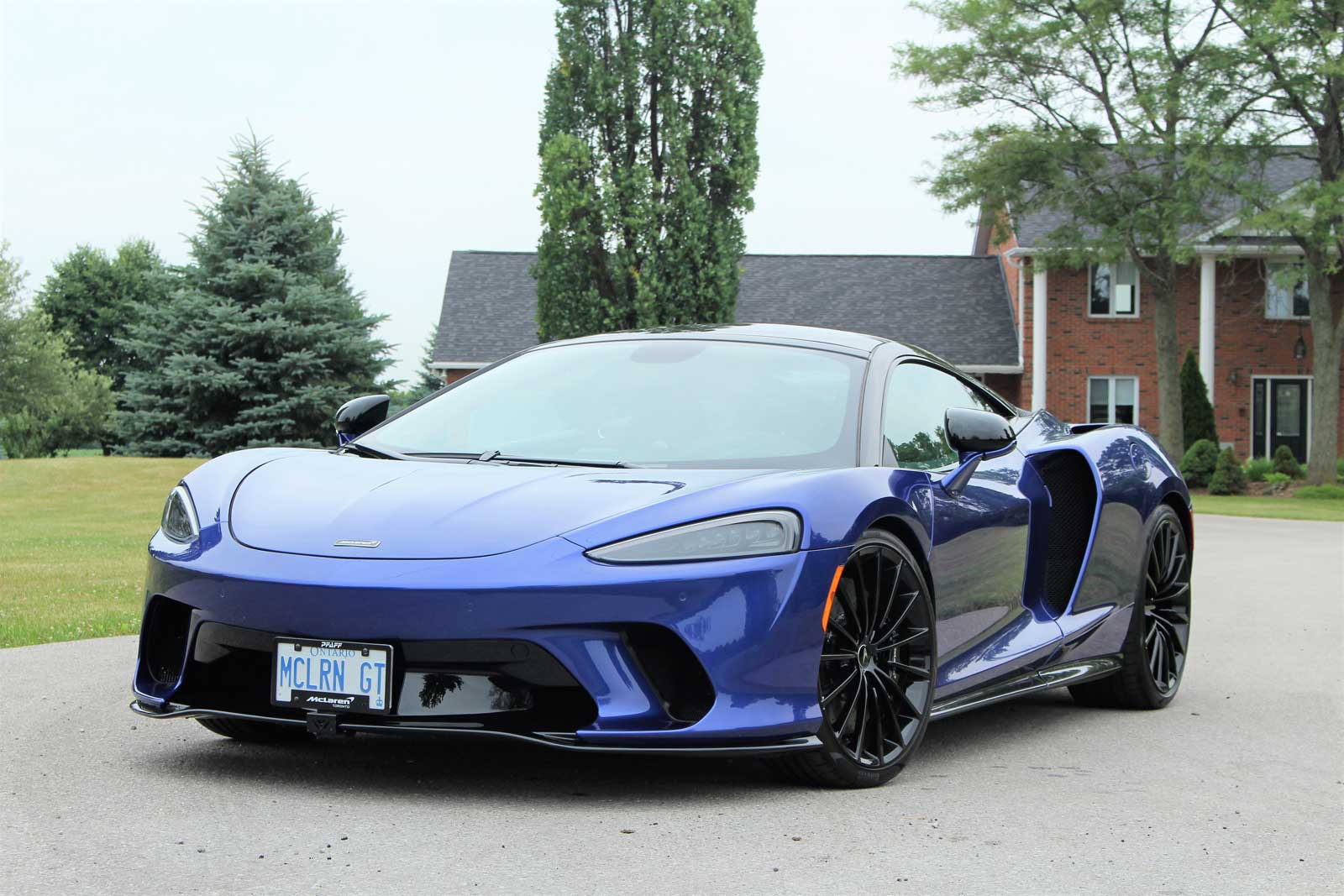 Supercars generally serve two purposes: to get our adrenaline fix with blistering performance and intoxicating engine sounds, and to give us the opportunity to show off our good taste and wallet thickness. In some cases, a manufacturer will develop a car that also provides ride comfort and everyday usability, and one of them is the 2020 McLaren GT.

It competes against the Mercedes-AMG GT, the Porsche 911 Turbo S, the Aston Martin DB11 and the Bentley Continental GT, among others. Yet it’s still every bit a McLaren, although we could arguably say that its exterior design isn’t as extroverted as the brand’s other fine machinery, such as the Sports Series (570S and 600LT) and the Super Series (720S and 765LT). The GT’s front end simply isn’t as aggressive and distinctive, and the 15-spoke alloys on our test car aren’t particularly eye-catching, although they perfectly match the car’s blue and black exterior. 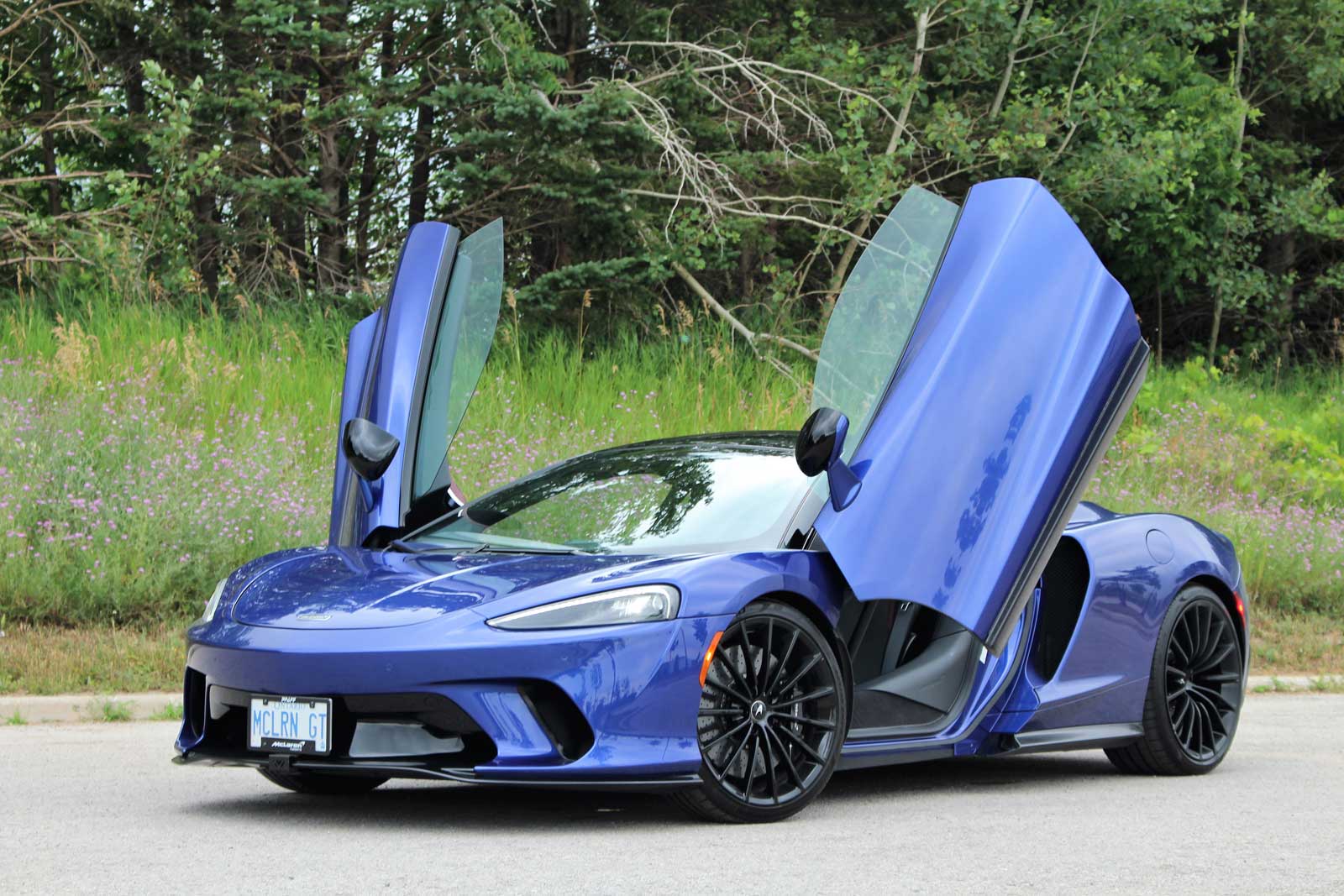 Whatever conservatism the 2020 McLaren GT displays disappears once we open the butterfly doors, which always succeeds in getting the attention of passers-by. And if some sports cars wear chrome bezels in their rear bumper to mimic exhaust tips, there’s no fake stuff here, with massive matte black or chrome pipes that stick out of the car’s lower rear fascia as if they melted holes through it.

The engine isn’t visible, but it can be heard and felt quickly and easily. The twin-turbocharged, 4.0-litre V8 develops 612 horsepower as well as 465 pound-feet of torque that peaks between 5,500 and 6,500 rpm. This output is fed to the rear wheels by a dual-clutch, seven-speed automatic transmission, or what the brand calls SSG for Seamless Shift Gearbox. 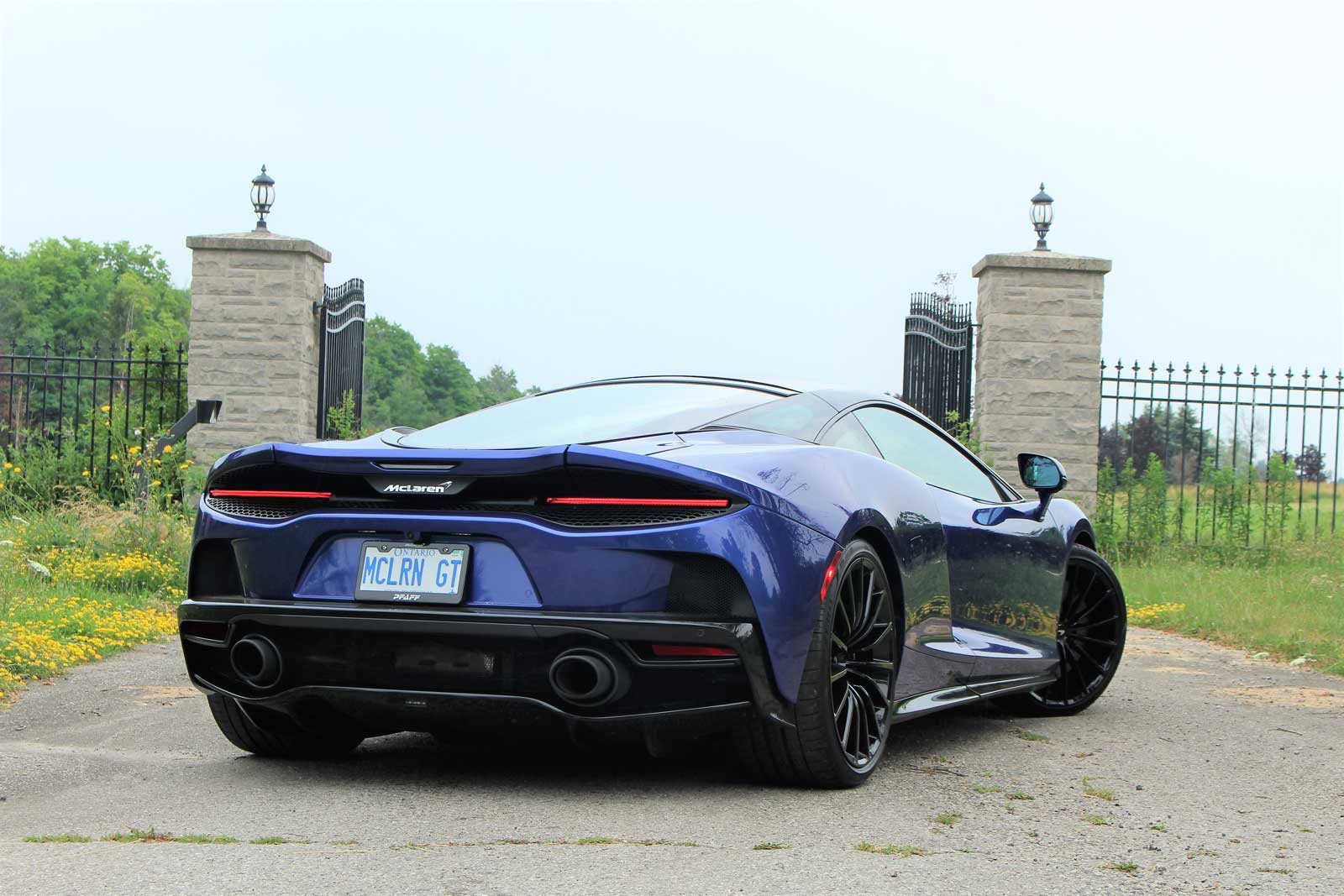 In normal or Non-active mode, the engine doesn’t sound all that mean. However, press the Active button and flip the drive mode from Comfort to Sport, or to Track, and the blown V8 roars and spits as if someone had stolen its beer. Thanks to its launch mode, the GT can blast from 0 to 60 mph in 3.1 seconds—or from 0 to 100 km/h in 3.2. Top speed is pegged at 203 mph or 326 km/h. 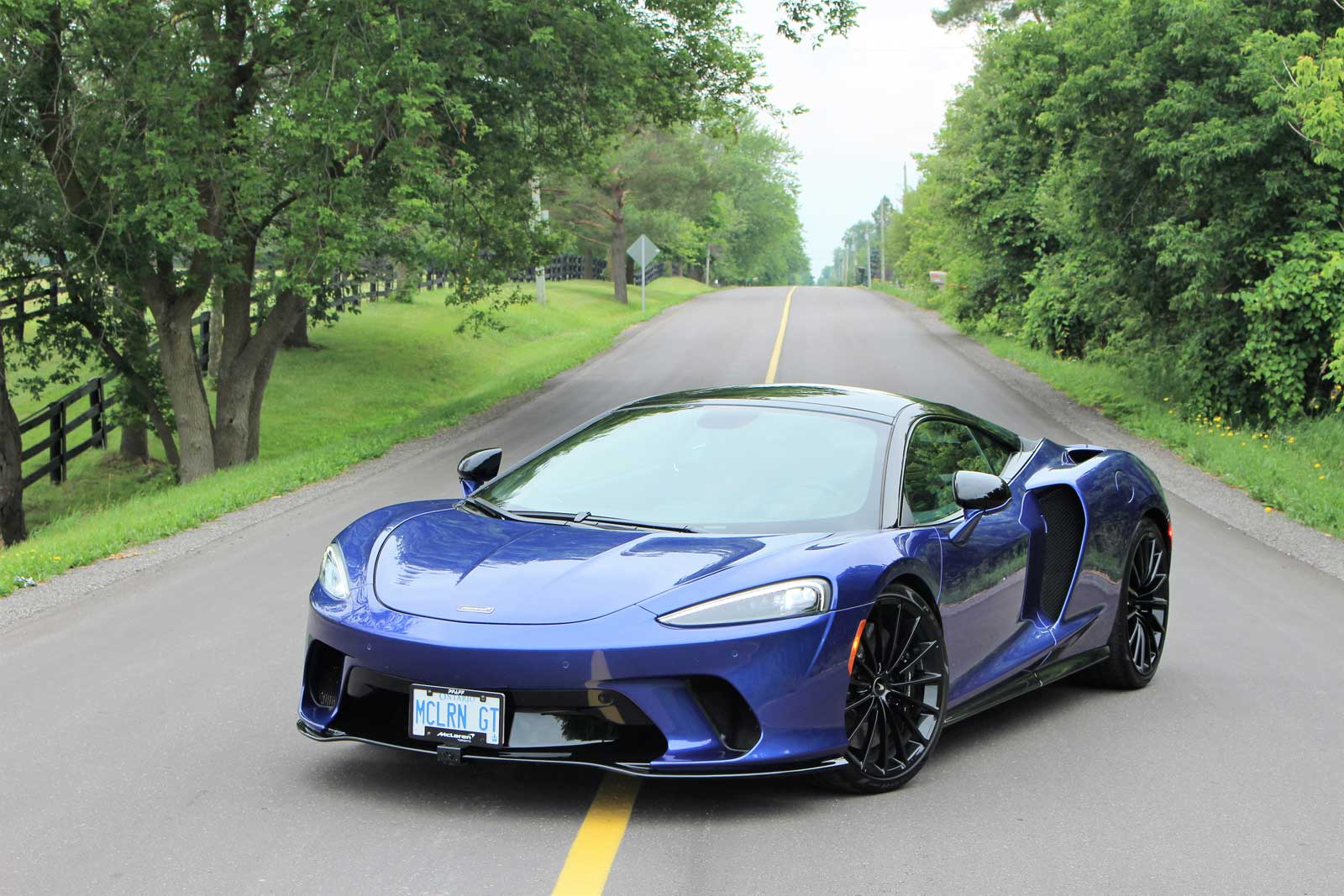 Well, owning a McLaren isn’t all about straight-line speed, and the GT’s mission is to offer supercar performance and razor-sharp handling without a punishing ride or zero trunk space. It can putter along at city speeds without feeling like a lion trying to break its cage open, and the subdued engine sounds upon start-up won’t tick off our neighbours in the morning as we head off for work.

Because yes, the 2020 McLaren GT is a comfortable daily driver. We can head out on a road trip over the weekend with the spouse and not feel exhausted after a couple of hours of driving. The 150-litre or 5.3 cubic-foot front trunk can swallow a carry-on suitcase, and there’s also room in the rear trunk, above the hidden engine. The company says a golf bag fits there, which sounds optimistic, although we admittedly didn’t try to fit one in the car. Owners can even purchase a custom-designed bag made with Bridge of Weir leather that look great inside the rear cargo area. 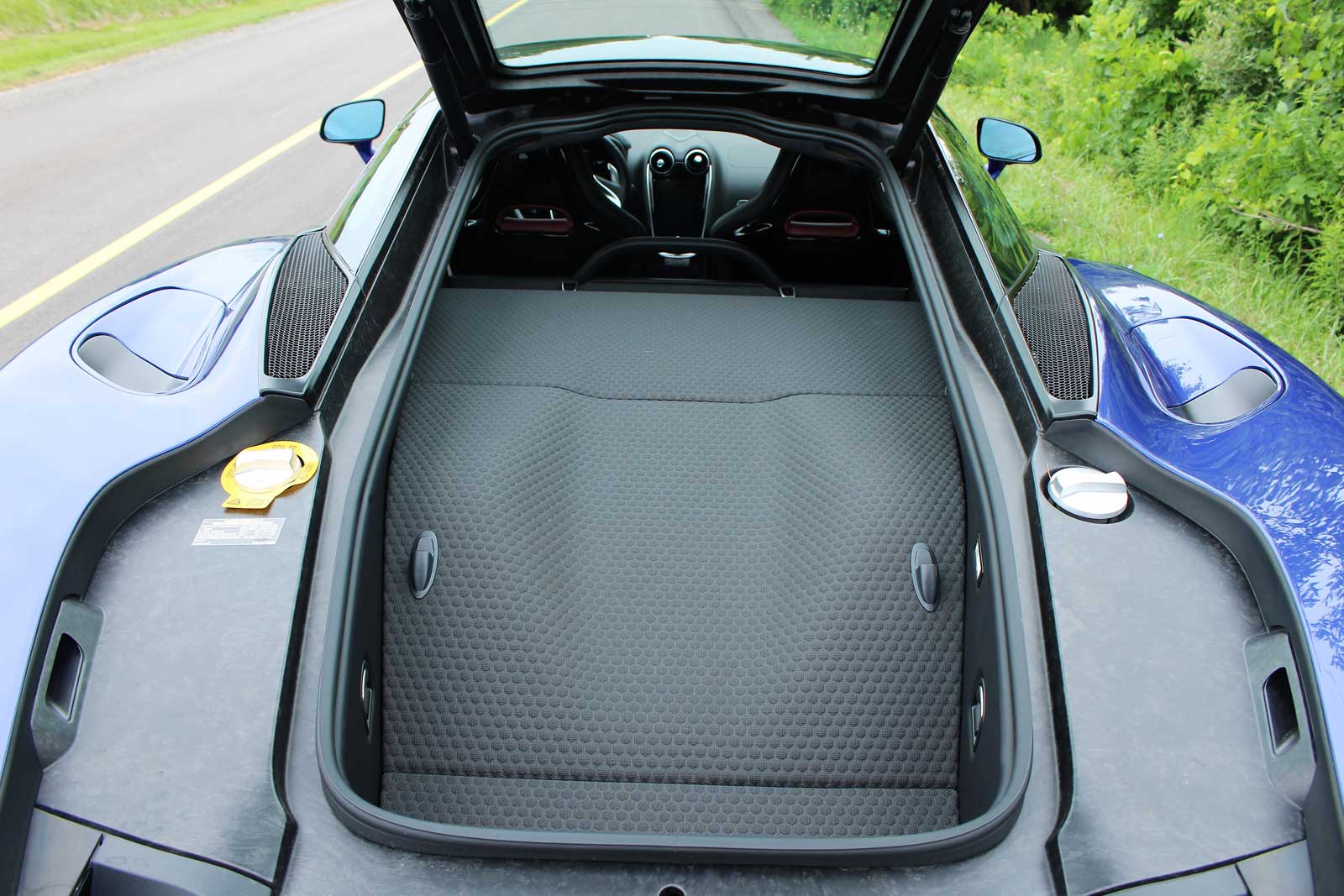 Compared to the 570GT, the GT has a bigger rear deck—420 litres versus 220, or 14.8 cubic feet versus 7.8. In short, the GT is more practical—a little—than the aforementioned Sports Series models.

All this doesn’t mean this new McLaren is as quiet and cushy as a Mercedes-Benz S-Class. There’s still a fair amount of suspension and road noise that filters through the carbon fibre tub, around town that is. At slow speeds, there’s quite a bit of hissing and whirring sounds, too.

However, the seats are supportive despite their thin backsides, the roof panel can shift from transparent to opaque at the touch of a button, and there’s good visibility all around considering the car’s low roofline and slim greenhouse. The upholstery feels rich to the touch, while the seats wear two different stitching patterns and colors, and the switchgear feels solid. The infotainment system rocks with Bowers & Wilkins audio, although the vertically mounted touchscreen could be bigger by today’s standards and the navigation map graphics could have brighter colours. 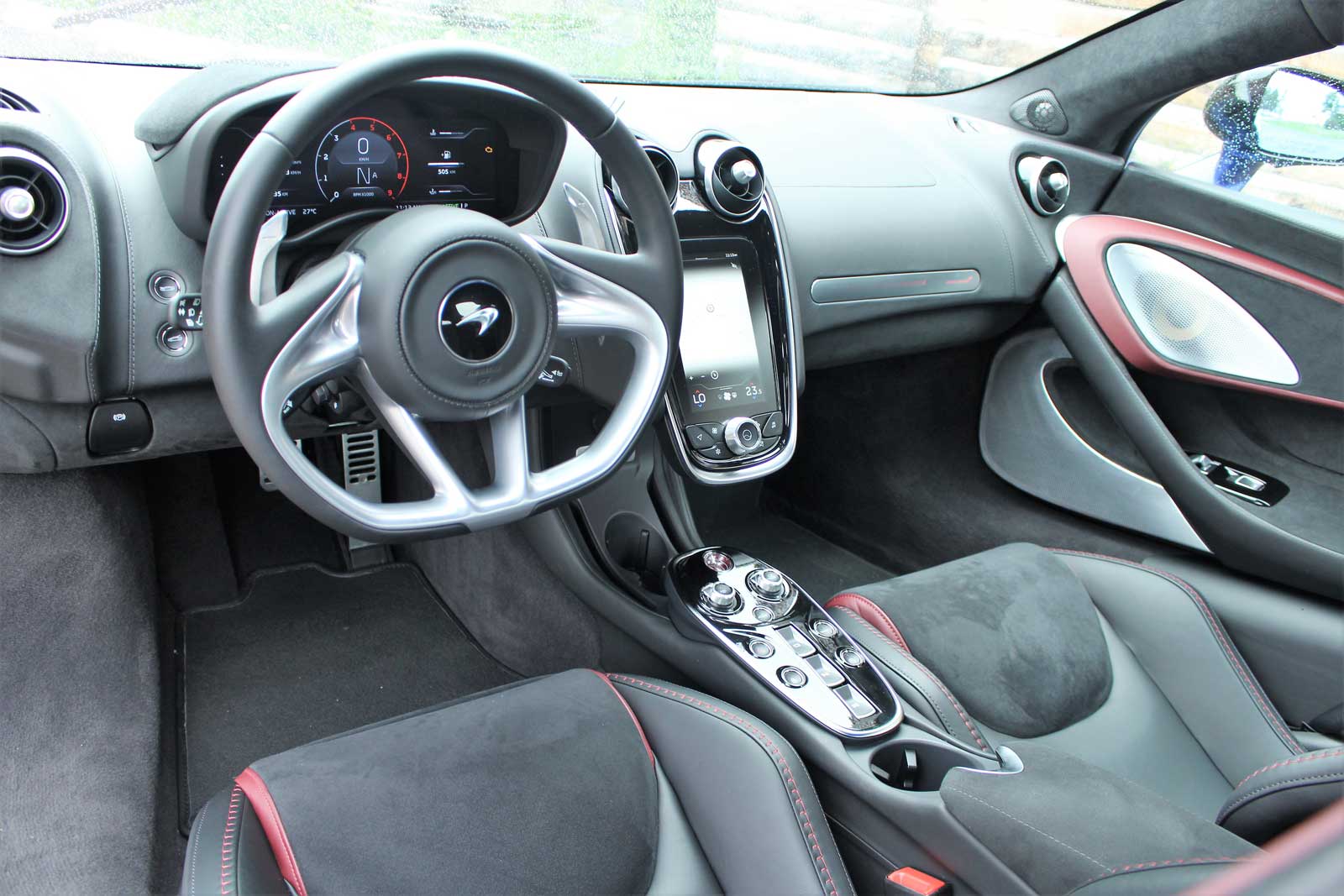 In the market, there are grand touring models that seek to achieve supercar status—like the BMW M8 and the Mercedes-AMG S 63 Coupe for example—and there are supercars that try to prove that they’re good GTs for the daily commute—like this McLaren. Indeed, the GT can be used as an everyday car, but we’re more inclined to choose a more comfortable and more practical vehicle for that, and drive a McLaren when we feel the need for speed, not for cruising around town or going on a road trip.