The new 2020 Toyota Corolla is here and we had the chance to drive it. Can the popular model continue to be a success story for the Japanese manufacturer?

I could talk to you about the fact that the new 2020 Toyota Corolla sedan is built on the new TNGA platform that gives it a sportier ride thanks in part by its “Torsional rigidity that is improved by 60%”, or that the Sport Mode “improves acceleration and shifting” … but you’re probably not here for that, and even if those statements are both very true, it, unfortunately, doesn’t make the Corolla much more exciting to drive.

Now that we got that out of the way. The Corolla is no joke. It is the most popular Toyota of all times, with 45M units sold since 1966. That makes it a very important model in a competitive segment where people are looking for reliability at an awesome price.

In September last year, the 2018 Corolla hatch was launched, carrying the new face of the Corolla. We have to admit, we loved that new ‘Rolla. A sporty-ish proposition with a 6-speed manual gearbox and a pretty look at a good price, we’ll take that any day.

Only 10% of corolla hatches were sold with a manual, however. And we don’t if that model attracted youngsters like Toyota hoped it would.

Now the Corolla sedan goes under the knife for 2020. It’s shorter but wider and lower. And it brings along a new hybrid variant.

The 2020 Corolla sedan is divided into three groups, S Line, L Line and the new Hybrid. L line models are powered by a 1.8 Liter four-cylinder engine that makes 139 horsepower and 126 lb-ft of torque. The S line is equipped with a 2.0 Liter four-cylinder powerplant making 169 horsepower and 151 lb-ft of torque. The hybrid basically uses the Prius’ powertrain, a 1.8 Liter engine paired to an electric motor that cranks out 121 horsepower. The fuel consumption is frugal on this one, with a 4.5 L/100 km combined figure.

What’s interesting is that the sedan is not exclusively sold with a CVT, it kept the 6-speed manual gearbox; the base L trim comes with it and starts at 18,990. The S line’s SE and SE Upgrade also come with a standard 6-speed stick shift, and the most expensive XSE is CVT only and will run you $28,490.

The Hybrid comes in two trims, base and Premium Package.

A comfortable, efficient ride that is still lacking a bit of flavour

The Corolla hasn’t gained much oomph. The 1.8 Liter engine is a little lazy, while the 2.0 Liter engine seems more appropriate in terms of performance. The CVT transmission is geared towards efficiency; while the response is there during city driving, merging on the highway seems painstaking. Same feeling on the hybrid side, but with better fuel economy. We thought that maybe Toyota could have considered using the RAV4 Hybrid’s drivetrain to help with accelerations, but that’s not the strategy. On the upside, it keeps the Corolla hybrid’s cost low at $24,790. Finally, the absence of all-wheel drive is also a bit unfortunate for our climate.

On the flip side, in the “point A to point B” scheme of things, the Corolla sedan is still one of the best buys. It is comfortable on the road and takes care of its passengers. Best of all, the cabin is surprisingly quiet for that particular segment.

Space is a little on the short side height-wise in the rear if you are 6’ and over, but legroom is astonishing for the size of the car.

The Entune infotainment system inside the 2020 Corolla is a bit entangled, with commands and buttons on each side in addition to the touch screen, it will take a new owner some time to get used to it. The screen, which is 7 or 8 inches depending on the variant, seems a bit out of place and “bolted” in the middle of the dashboard. Apple CarPlay is standard on all variants, but Android Auto is not.

Toyota is trying hard to gain new customers among the young – the now-defunct Scion brand was supposed to take care of that – and it’s been a struggle. But no matter how successful they are at doing it, the Corolla will always sell in high numbers to the general public because it speaks reliability and affordability. The Corolla is like comfort food, but for the road. It serves the purpose of getting you where you want as safely and efficiently as possible… and for a price that won’t put a hole in your wallet. 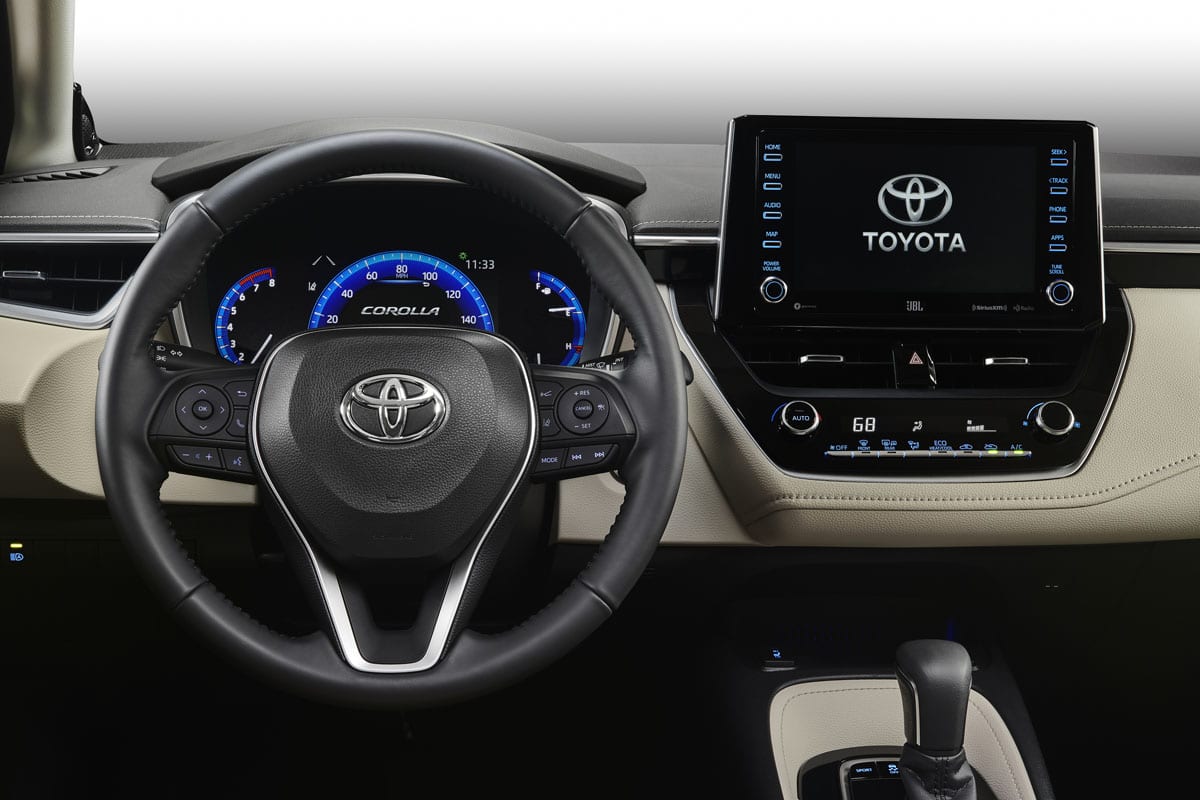