Glance 2020 Volkswagen Tiguan At a Glance

2020 Volkswagen Tiguan At a Glance 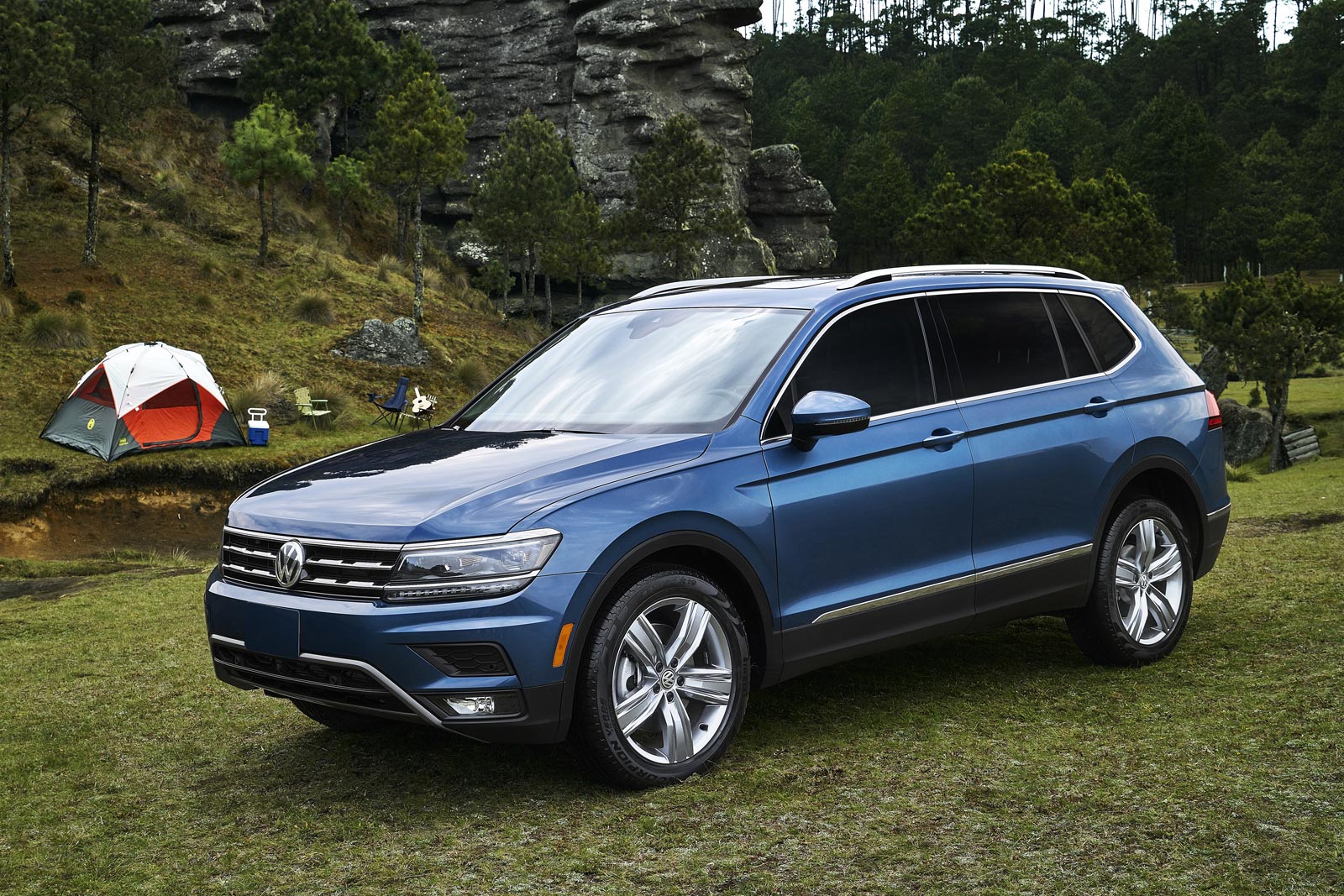 The second-gen Tiguan brought many new customers to the brand, but will they stay?

When the second-generation Volkswagen Tiguan hit the market in 2017, the automotive press and VW fans alike expressed a certain level of disappointment after discovering how much the compact crossover had changed. The first-gen model was energetic and handled like nothing else in its segment, which resulted in it being tagged as the “GTI of SUVs.”

2021 Volkswagen Atlas At A Glance

However, the original Tiguan was very small, and North American consumers wanted something more spacious. What they got is the bigger variant of the latest Volkswagen Tiguan—there are two sizes now for the global market. Despite the criticism, sales shot up by 34% during 2017, and by 43% during 2018. Obviously, the German automaker won its bet and conquered many new customers. 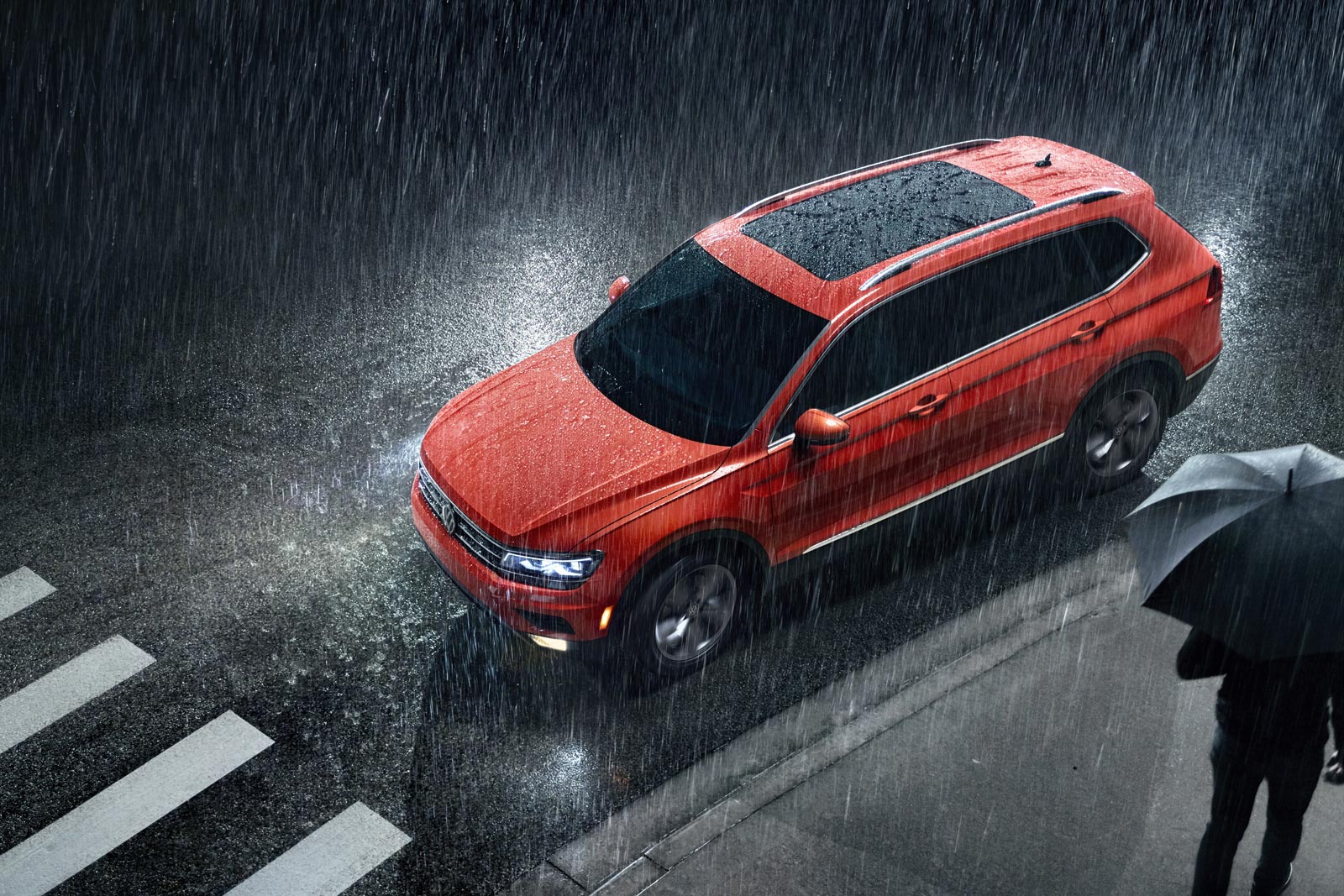 Sales cooled down in 2019, though, as the crossover’s reliability score took a hit over the last couple of years. Consumer Reports gives the 2020 model a “Predicted Reliability” rating of 1 out of 5, with engine, drive system, brakes, body integrity and power accessories as trouble spots reported by owners.

The 2020 Volkswagen Tiguan’s competition includes the Honda CR-V, the Toyota RAV4, the Mazda CX-5, the Nissan Rogue, the Hyundai Tucson, the Mitsubishi Outlander, the Chevrolet Equinox, the Subaru Forester, the Ford Escape and Jeep Cherokee, among others. An optional third-row seat increases capacity to seven passengers, which only the Outlander also offers in the compact crossover segment.

For the 2020 model year, the Volkswagen Tiguan didn’t get many changes. It’s still offered in Trendline, Comfortline and Highline trim levels, but there’s a new IQ.DRIVE variant that serves up adaptive cruise control, lane keep assist and automatic high beams at the lower price point—these features are also part of an option package on the top-shelf Highline. 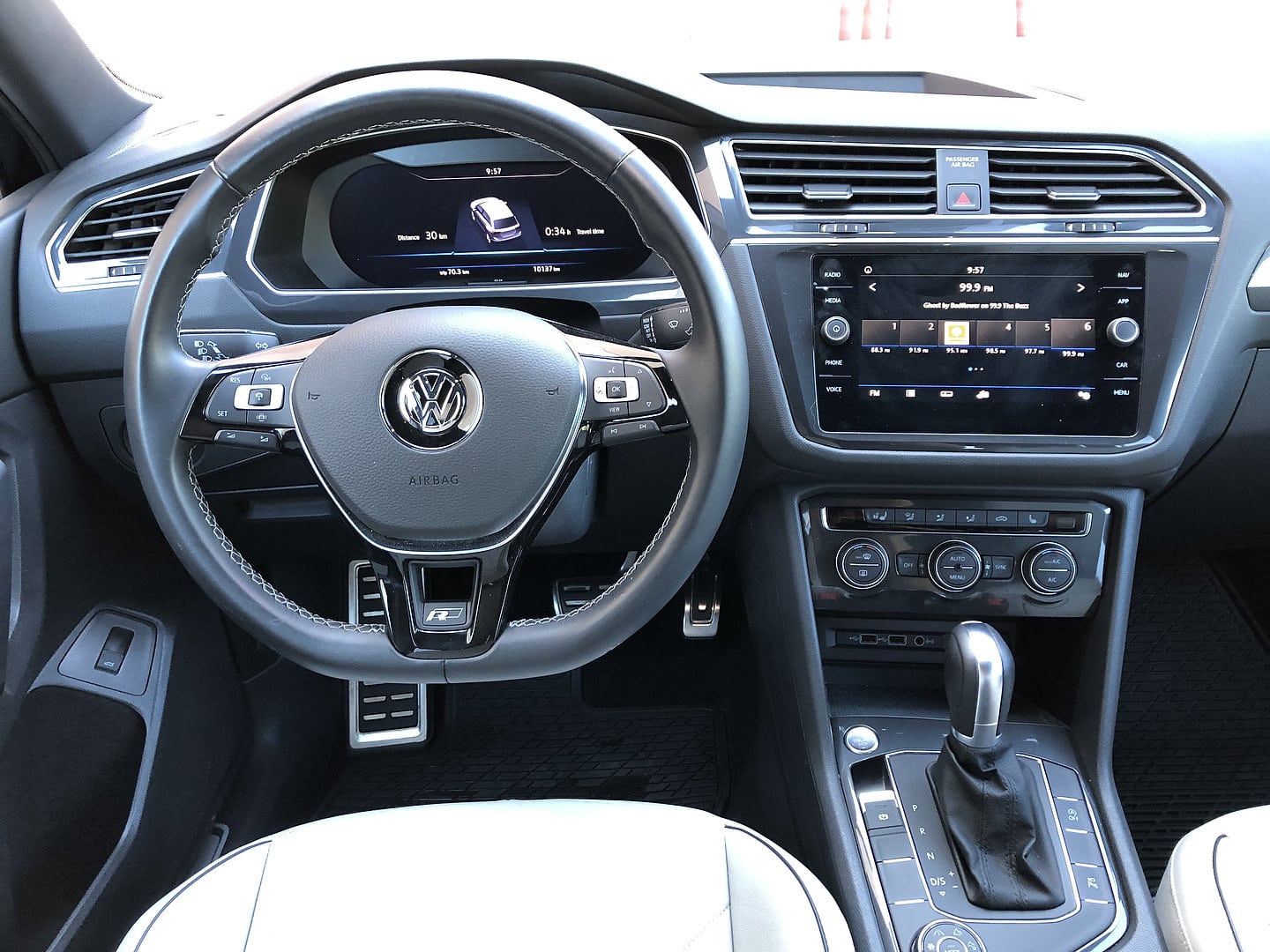 Under the hood, every Tiguan gets a turbocharged, 2.0-litre four-cylinder engine that develops 180 horsepower and 221 pound-feet of torque, matched to an eight-speed automatic transmission. All-wheel drive is standard in all trim levels except the base Trendline, which can also be chosen with a front-wheel drivetrain.

What the 2020 Volkswagen Tiguan Does Well

Interior space is vast, with generous rear-seat legroom for teenagers and adults. With the second-row seatbacks in place, cargo volume is rated at 1,065 litres (934 in the seven-passenger version), and with all rear seats folded, 2,081 litres (1,860 in the seven-passenger version). Simply put, it’s one of the most accommodating SUVs in its class, up there with the RAV4, the Forester and the CR-V.

The Volkswagen Tiguan’s infotainment system is easy to use with fairly big button zones and enough features to keep everyone happy. The 6.5-inch touchscreen could be bigger in the base trims, but the 8.0-inch display in the uplevel versions is fine and includes navigation. Apple CarPlay and Android Auto integration is standard across the board. 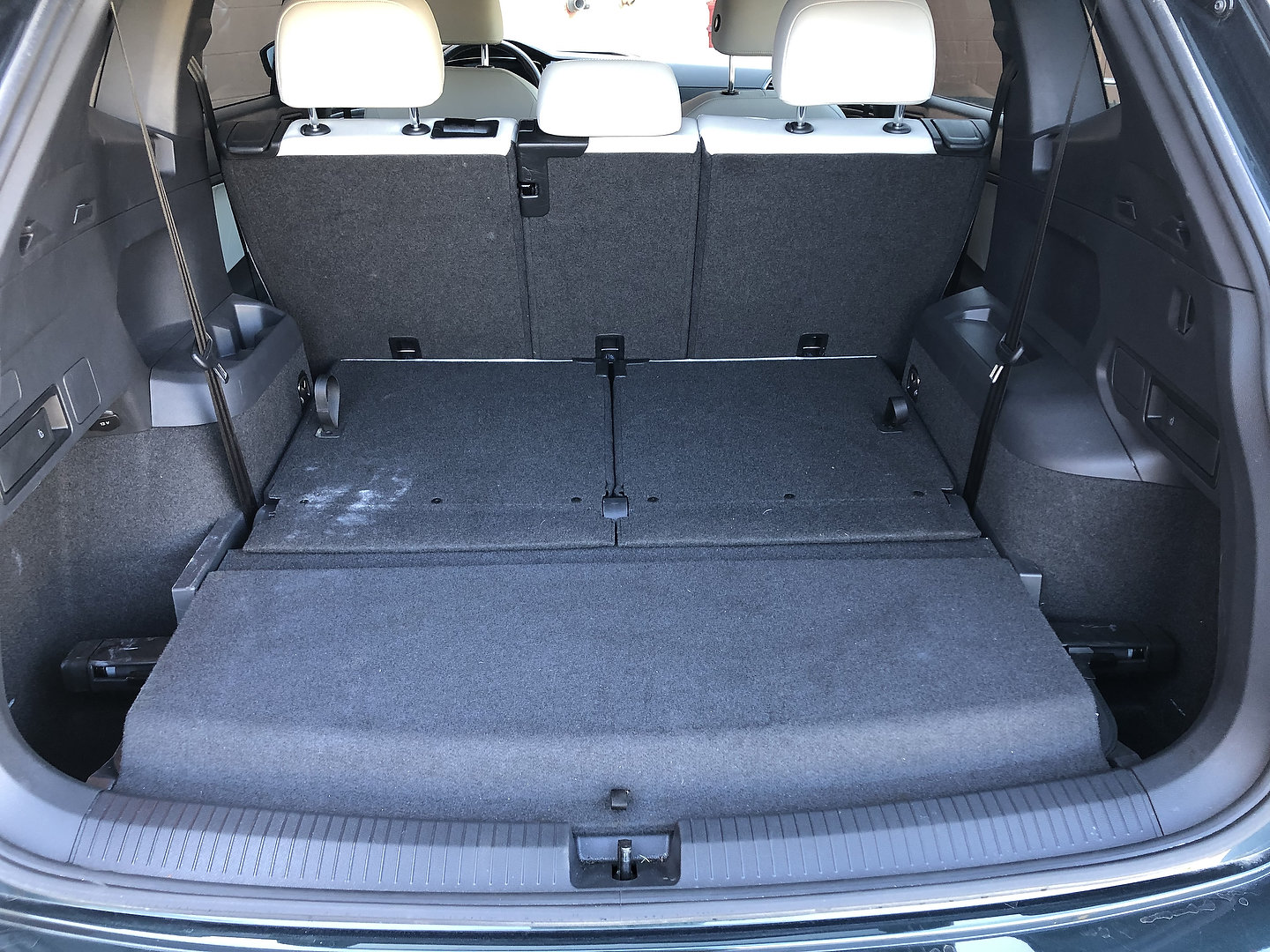 The Tiguan’s all-wheel drive system is pretty good in winter conditions. If favours the front wheels under normal driving, and instantly feeds power to the rear when slippage is detected.

The nine-speaker Fender Premium audio system offers great sound quality, and we highly recommend it. However, it’s only available in the costliest Highline trim.

What the 2020 Volkswagen Tiguan Doesn’t Do Well

Some interior plastics in addition to the leatherette upholstery look and feel low-rent. As we mentioned earlier, the Tiguan has some build quality issues to deal with.

Even though a third-row seat is available, those extra two chairs are neither spacious nor comfortable. There’s no room for our feet and we feel confined back there. VW doesn’t call this a “5+2” seating arrangement for nothing.

Fuel economy could be better. The Volkswagen Tiguan AWD boasts a combined city/highway of 10.2 L/100 km, which is the worst among compact SUVs with four-cylinder engines. At least it can run on regular unleaded, but still.

The Tiguan just isn’t fun to drive as it used to be, and seems to have lost its character when it morphed into the second-generation model. The engine shows no eagerness and the suspension is tuned for comfort above sporty driving dynamics, which isn’t what Volkswagens have long been known for. Those who want a little excitement behind the wheel should rather look at the CX-5 and the Sportage. 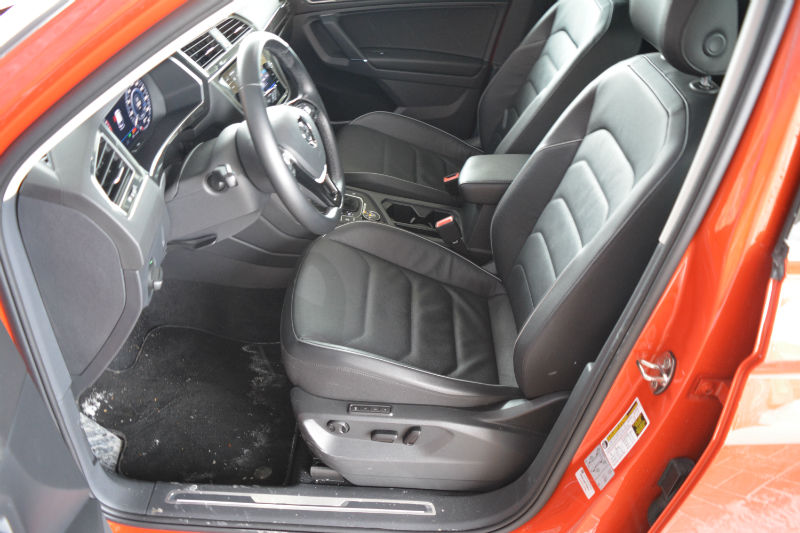 The 2020 Volkswagen Tiguan is more popular than before because it’s roomy, looks good—and even better with the optional R-Line appearance package—and serves up flawless cockpit ergonomics. However, for its base price of $29,770 before freight and delivery charges, we’re expecting more standard features. Adding AWD raises the price to $32,040, and some of the most interesting features can only be found on the Highline, which means spending upwards of $43K.

The Tiguan’s redesign may have helped it increase its market share, but it doesn’t mean it’s the best choice on the market right now.

Ford Threatening Dealers That are Charging Markups for the Lightning

The threat is losing allocations for the Lightning. Under the Sales and Service Agreement between Ford and dealerships, the behaviour is not allowable. ...
Read more
Previous articleThe Airspeeder Electric Flying Car From Alauda Is Coming And Will Go Racing
Next articleThe McLaren 765LT Priced At $358,000 To Start