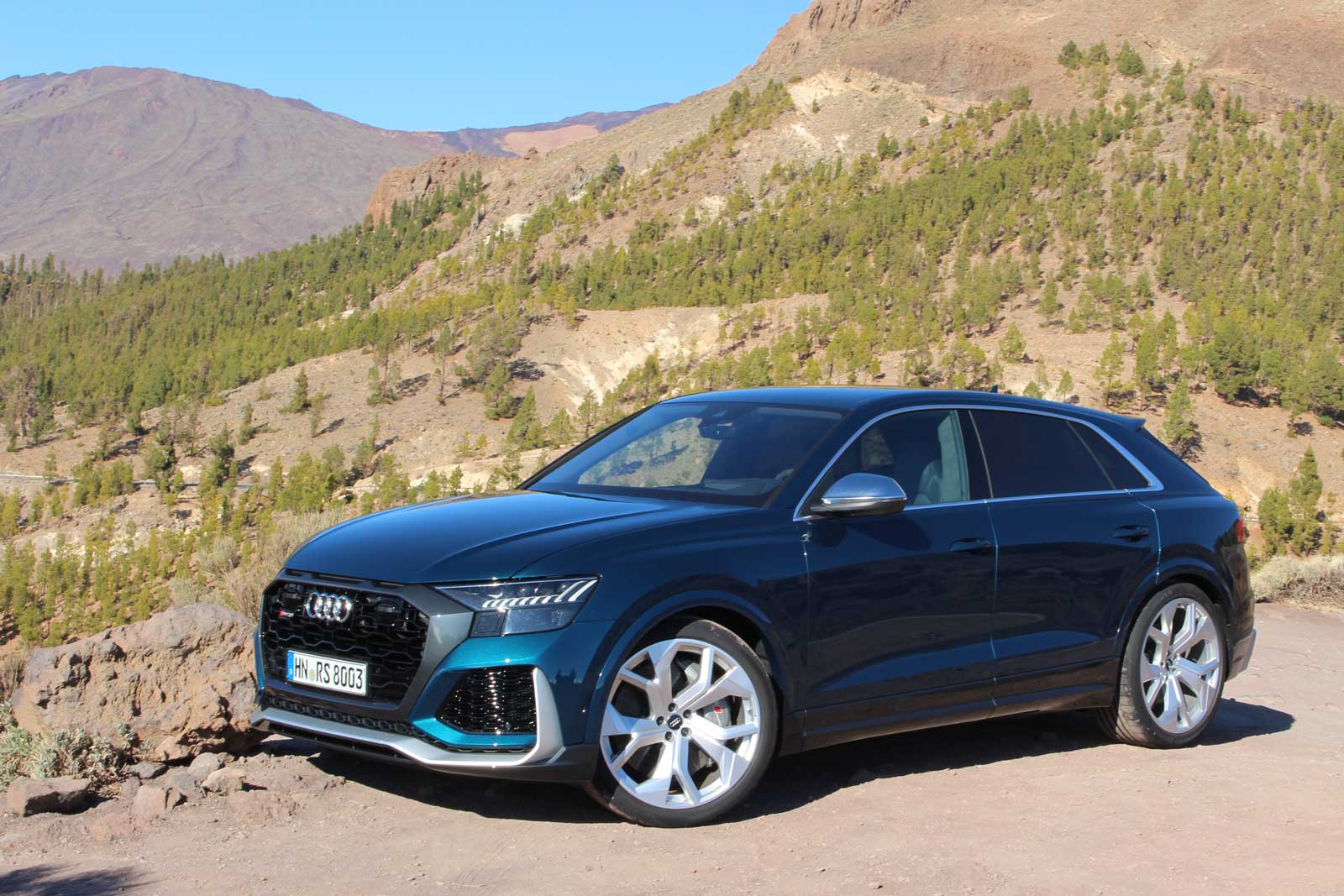 TENERIFE, Spain – Ever since the Audi Q8 was introduced last year, and even since the second-generation Audi Q7 hit our market back in 2016, many were wondering when a high-performance version of the brand’s midsize SUVs would appear. The wait is over with the launch of the 2021 Audi RS Q8.

After all, the other German brands have been flaunting their own muscle-rippling SUVs for a while now, such as the BMW X5 M and X6 M, the Porsche Cayenne Turbo and Turbo S as well as the Mercedes-AMG GLE 63 S 4MATIC, and British company Land Rover has also been selling the Range Rover Sport SVR for a while, too. It was time for Audi to step up to the plate, and at its first swing at bat, it hit a home run.

We’ll admit that the 2021 Audi RS Q8’s goodness is heavily influenced by the other high-horse SUVs that the Volkswagen Group produces on the same platform. As a matter of fact, the Audi Q7 and Q8, the Porsche Cayenne, the Bentley Bentayga and the Lamborghini Urus all have the same bones, but the rest of the individual models have been tailored specifically by each brand. 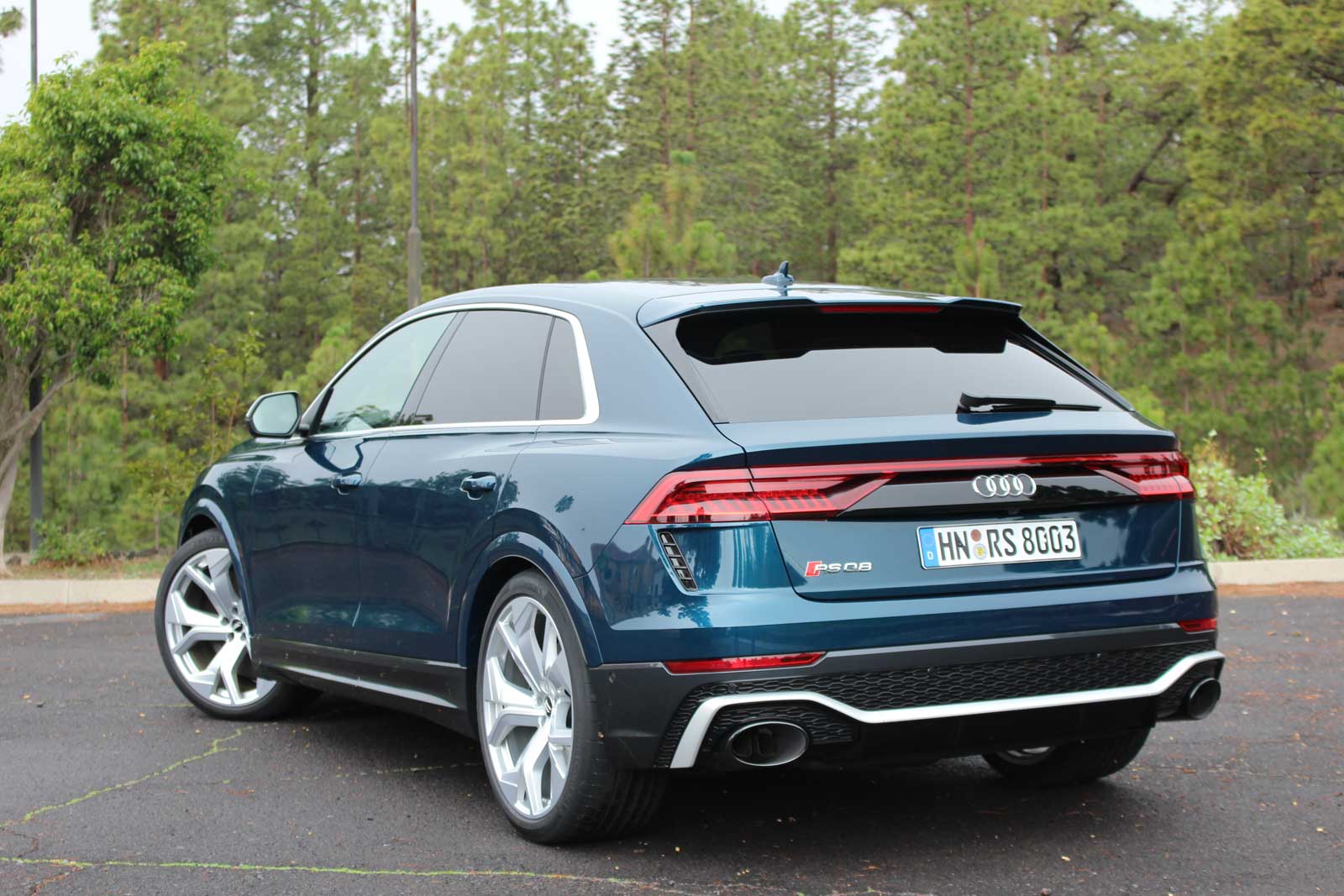 The group’s twin-turbo, 4.0-litre V8 gets widespread use as well, and its output varies from one model to another. In the Audi, it boasts 591 horsepower (441 kW, 600 PS) and a tree-stump-pulling 590 pound-feet of torque. As in all other cases mentioned here, it’s connected to an eight-speed automatic transmission and all-wheel drive—quattro AWD, of course.

In the RS Q8, this engine sounds mean at idle, and roars like a lion when we select the Dynamic drive mode and mash the throttle. And yet, in Comfort mode, it’s much quieter, so our neighbours won’t be irritated every time we come home at night or leave early in the morning. Although the V8’s deep rumble through the tailpipes will always be heard to some degree.

New to Audi Sport (read: RS) models is an RS Mode button on the steering wheel. Pressing it activates the RS1 mode, and pressing it again summons RS2, which are basically user-defined drive modes used to configure throttle response, suspension, steering and other dynamic settings. Similar to BMW’s M1 and M2 buttons, the driver can fine-tune a couple of settings and quickly access them here. Smart and simple. Drive mode buttons should always be located on the steering wheel, not on the dashboard. 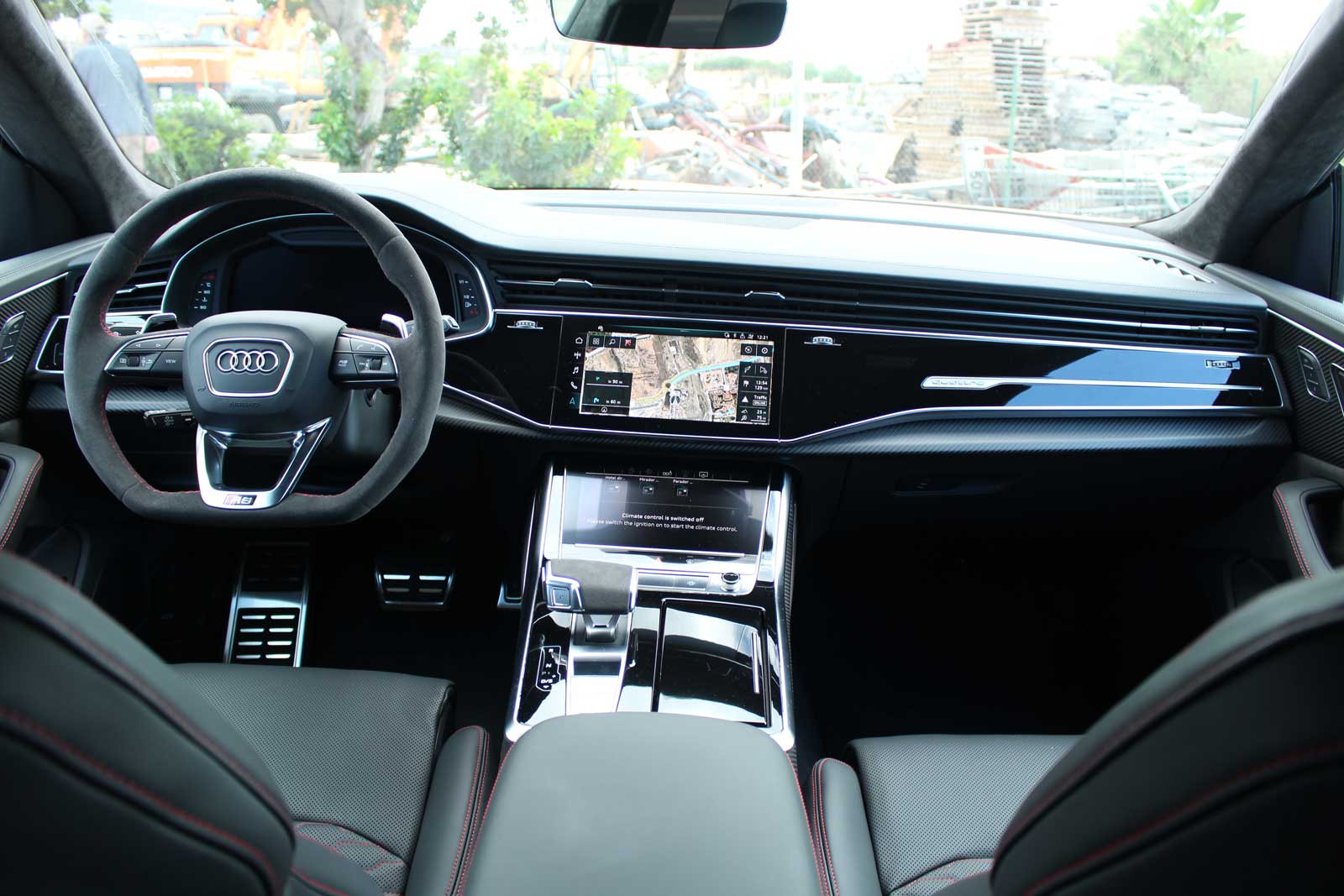 Comparisons with the Urus are inevitable. The Audi RS Q8 concedes 50 horses and 37 lb.-ft. to the Lambo, and the 0-to-100 km/h dash takes 3.8 seconds in the Audi, or 0.2 second slower. However, the Urus is the douchebag of the family, with a more pronounced engine note to go with its more extroverted looks.

Meanwhile, the Cayenne is the driving dynamics champ while the Bentayga obviously has the plushest ride. We didn’t mention the much more sensible Volkswagen Touareg because it isn’t sold in North America anymore, but it too shares this platform and is arguably the volume seller that can make this all happen.

Yet all this doesn’t mean the 2021 Audi RS Q8 can’t handle a twisty road or two, because it can. There’s a little more damper travel in the suspension than in the Porsche and Lambo, even in the sportiest setting, and seems to us like the perfect balance of ride comfort and handling. BMW’s M SUVs are a lot stiffer, by the way. 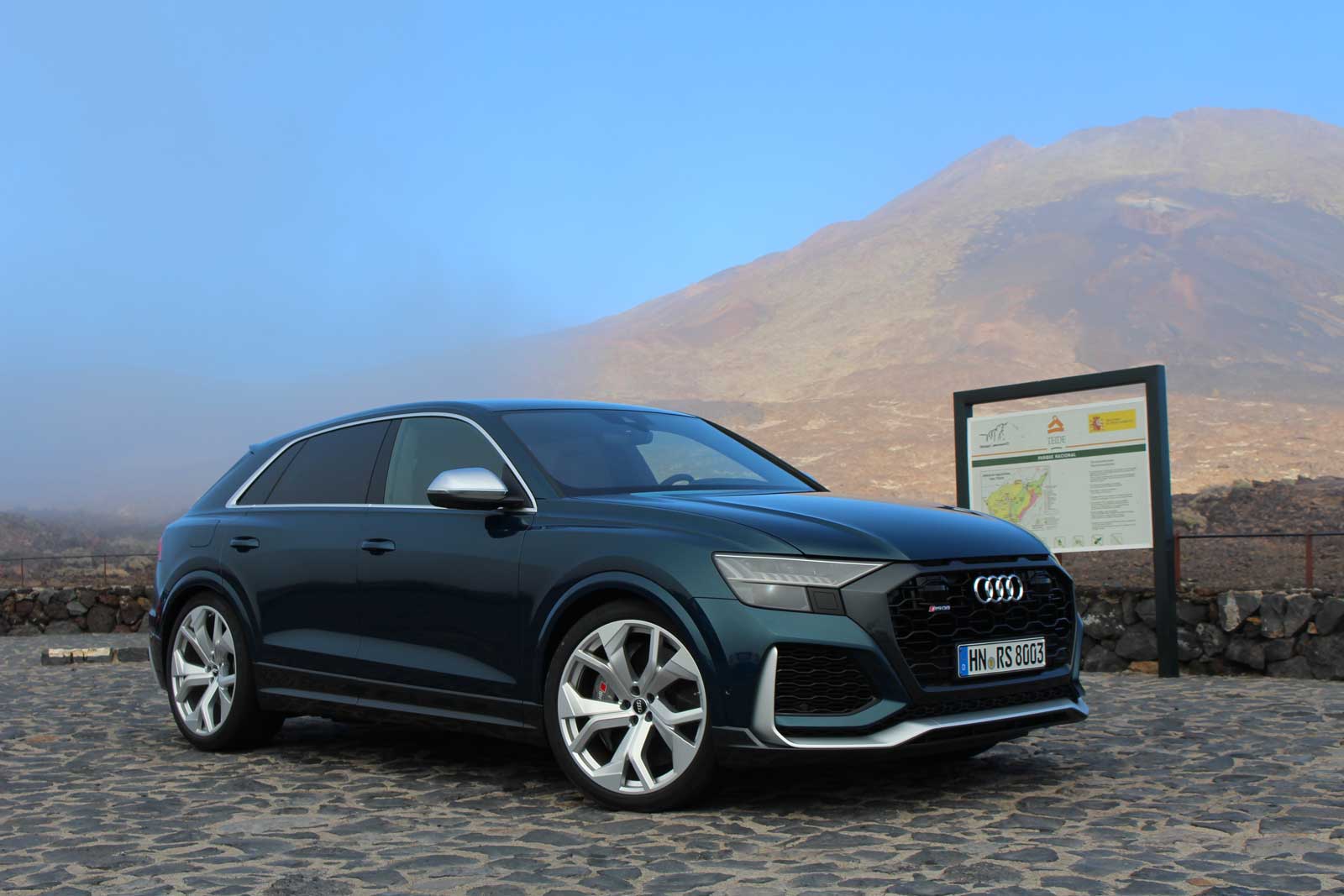 There are a number of distinctions between a run-of-the-mill Q8 and the RS variant, such as the more aggressive front bumper with an integrated satin-like blade, while the grille surround is black instead of silver and the inner mesh is different. The rockers panels include a lower ridge, while the rear bumper also gets a silver blade in addition to oval exhaust cut-outs, in which we can clearly see the dual muffler tips in each side.

While 22-inch alloy wheels are standard, a set of massive 23 inchers can be specified as well. Good luck finding winter tires for those rims. It’s best to downgrade to smaller wheels during the snowy season, but that might spoil the look of this super-SUV. Oh well.

From a styling standpoint, the 2021 Audi RS Q8 is somewhat more eye-catching than the conservatively styled Cayenne and Cayenne Coupé, not overdone like the Urus and nowhere near as baroque as the Bentayga. It’s like Audi intentionally waited until all its corporate cousins launched their SUVs and then blitzed them all with a more striking design.

Inside, well, we get the usual styling treatment all new Audi models receive, with expansive gloss black surfaces, but tasteful chrome and satin trim to compensate. The RS also gets red stitching, an Alcantara-wrapped wheel and some carbon fibre accenting to match its yet-undisclosed price. The stacked two-screen setup adds a generous helping of sophistication, although the touchscreens don’t always respond well to finger poking, despite its haptic feedback. In a nutshell, the system works well, but can be quite distracting while driving. 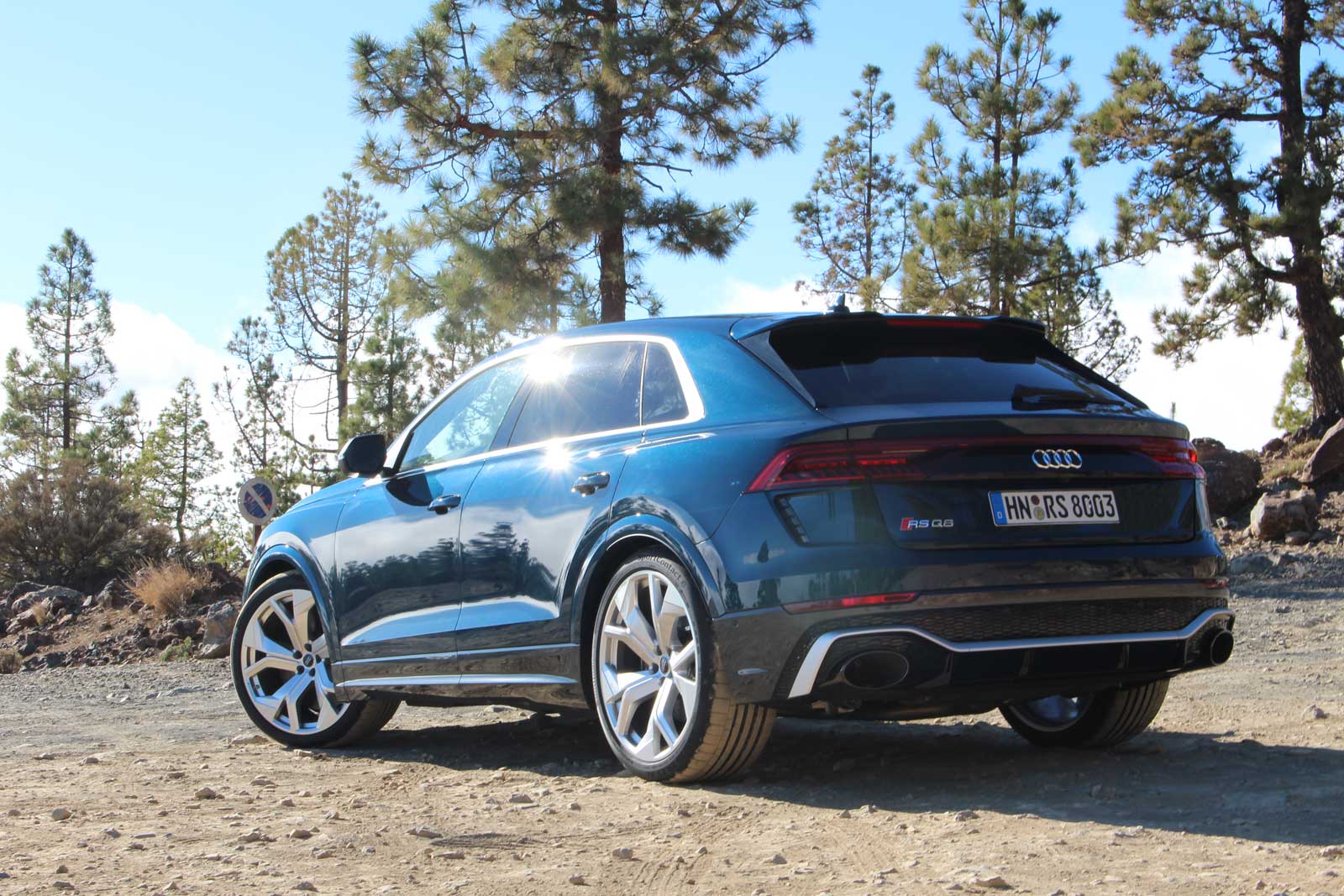 It’s fast, it’s attractive and it’s just as talented a comfortable highway cruiser than an enraged road rocket. Now, would we choose the RS Q8, or the equally powerful and desirable Audi RS 6 wagon? That’s a tough choice, but the RS 6 will likely come in at a lower price point in addition to being just as thrilling to drive.

However, for those who will favour the 2021 Audi RS Q8 over the RS 6 or any of its rivals will enjoy what could be the best all-around high-performance SUV the VW Group has to offer. And that’s no bull.

The Vivaldi web browser will be available on the play store for download on the vehicle’s Android Automotive operating system This will allow...
Read more