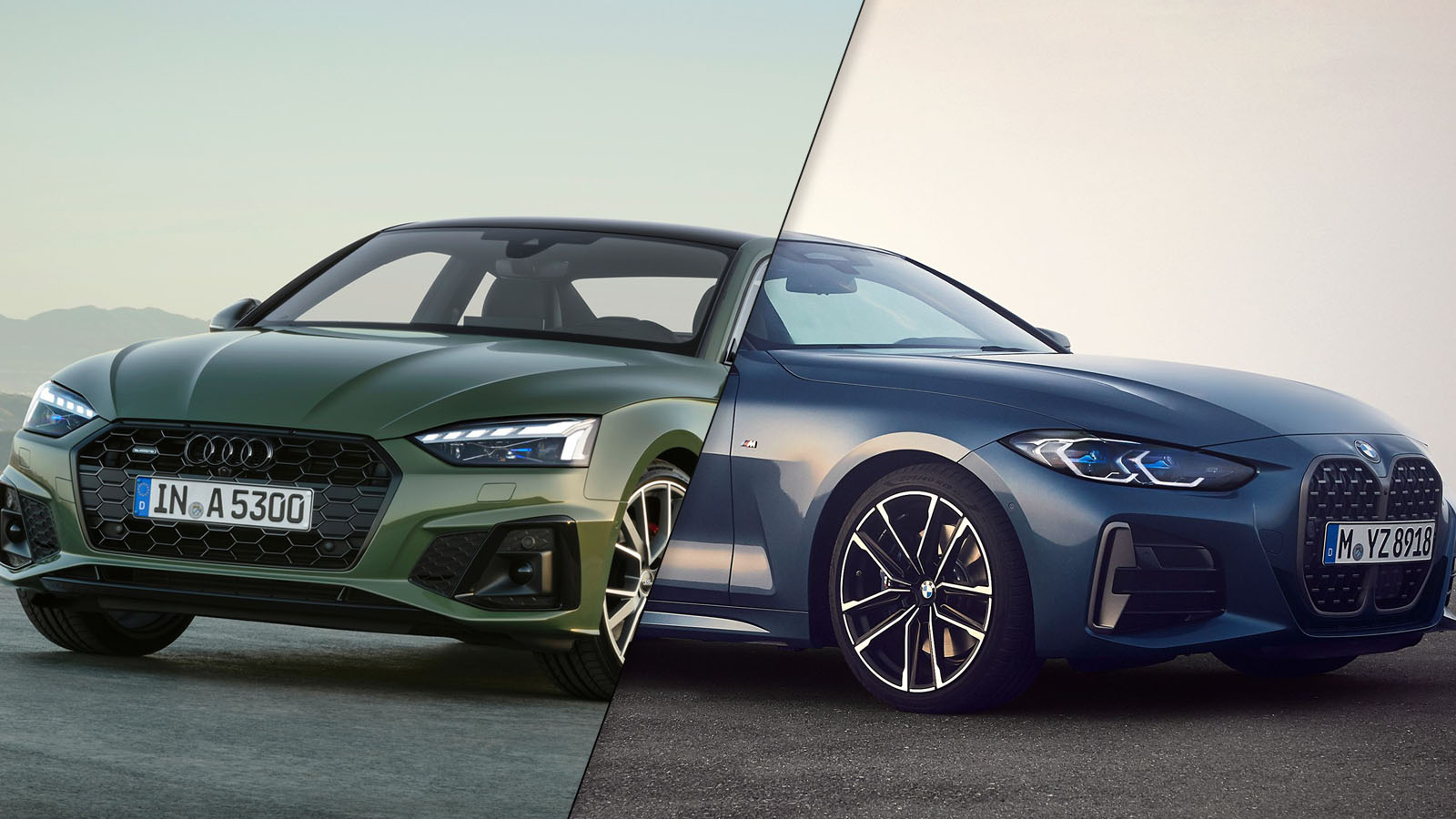 The compact luxury coupe segment is limited to only a handful of players. A long time ago, luxury 2-door cars were nothing less than a symbol of power, money, and achievement. That role has now migrated to luxury SUVs however coupes remain a sign of good taste. Where entre-level luxury coupes, most assume that they belong to up-and-coming individuals. Admittedly, most of them are racy, luxurious, and coveted. The new 2021 BMW 4 Series Coupé and 2020 Audi A5 certainly identify as such.

Other than the Audi and BMW, the alternatives lie with the Mercedes-Benz C-Class Coupé, the Infiniti Q60, and Lexus RC. Up until recently, Cadillac offered the ATS in coupe form however it, like the Japanese cars, has failed to take attention away from the German luxury brands.

The all-new 2021 BMW 4 Series Coupé was very recently introduced to much controversy, we might add. But other than the source of countless negative comments, the BMW will undoubtedly continue to meet expectations where luxury, prestige and performance are concerned.

The 2020 Audi A5 was an instant hit, from the moment it was revealed to the world at the Geneva motor show in 2007 up until today. The Audi A5 has effortlessly sold itself over two generations thanks to its styling, efficiency, and performance. Like the BMW, the various body styles have only served to increase the car’s reach and desirability.

Both of these cars are based on or share most of their components with a sedan equivalent. The new BMW 3 Series has risen from back to its rightful place as one of the best driving sport luxury sedans in the world. As such expectations for the 4 Series are great. As for the A5, the A4 sedan continues to deliver subtle and elegant prestige along with extremely satisfying performance.

It only makes sense that we compare the new BMW 4 Series and Audi A5 Coupés.

The 2021 BMW 4 Series is scheduled to land in the country in October. Pricing has not yet been shared by BMW Canada – late June is when we expect to receive the information.  We are speculating however that the price for the 430i xDrive will start between $54,000 and $55,000. The BMW M440i xDrive will require an extra $10,000. There are rumours that an M440i RWD will also be offered however we do not know if it will be available in Canada. Should it come, we don’t think it will undercut the M440i xDrive by much, if at all.

Although the Audi A5 is only a few years old, the BMW 4 Series is of the new generation as the 440i features 48V mild-hybrid technology. Audi is no stranger to the technology as it is available on a number of its other models – it’s only a matter of time before it trickles down to the A4/A5.

The 2020 Audi A5 is powered by a turbocharged 2.0-litre 4-cylinder that produces 248-horsepower and 273 lb.-ft. of torque. All models include Audi’s legendary quattro AWD system and a 7-speed S tronic dual-clutch automatic transmission. The S5 sports a turbocharged 3.0-litre V6 that is good for 349-horsepower and 369 lb.-ft. of torque. The transmission is an 8-speed Titronic and quattro’s all in.

Audi is recognized for its efficient powertrains as proven by the A5’s combined fuel consumption average of 8.8L/100 km, despite being able to hit 100 km/h from a standstill in only 5.9 seconds. The S5 averages 10.5L/100 km and conquers the 0-100km/h sprint in only 4.7 seconds.

The 2021 BMW 430i xDrive gets around thanks to an updated TwinPower turbocharged 2.0-litre 4-cylinder good for 255-horsepower and a notable 294 lb.-ft. of torque. The M440i xDrive features a TwinPower turbocharged 3.0-litre 6-cylinder engine which delivers 382-horsepower and 369 lb.-ft. of torque. The new 48-volt mild-hybrid system as part of the M440i can boost power by up to 11-horsepower under hard acceleration or provide energy for electronic systems when coasting under little to no engine load. Both powertrains include BMW’s xDrive AWD system and an 8-speed automatic transmission.

Fuel consumption data for the new BMW 4 Series is not yet available however we assume the M440i will reach better figures than the S5. The BMW 430i xDrive covers the 0-100km/h sprint in only 5.6 seconds. The M440i will launch to 100km/h from a standstill in only 4.5 seconds.

The all-new G22-generation 2021 BMW 4 Series will forever suffer its oversized kidney grille. Even if BMW explains that it is a respectful throwback to the legendary and coveted BMW 328 from the mid-to-late 1930s, few if any will ever comment that it was a good design decision.

The 2020 Audi A5’s fascia is, by contrast, and despite its considerable snout, far more graceful. The A5’s front end is in line with all other Audi cars which creates a beautiful synergy within the showroom. Here’s a tip: Once everything gets back to normal, visit your local Audi dealership. You’ll see what we mean.

From all other angles, both luxury business coupes are gorgeous. The Audi’s beltline is somewhat more defined but otherwise, they are far more attractive than the Mercedes-Benz C-Class Coupe, and the Japanese cars.

As for the cabins, once more, the newer BMW serves up a more sorted dashboard where the screen is better integrated into its surroundings. The Audi’s cockpit is still quite functional but shows its age, albeit mildly.

Full product and trim specifications for the new BMW 4 Series are not yet available however we do have a general idea.

The car will feature BMW’s Intelligent Personal Assistant which responds to the “Hey BMW” spoken prompt or at the touch of a button. BMW’s iDrive 7 with navigation will be standard and attainable through the 8.8-inch or available 10.25-inch infotainment screens. Apple CarPlay and Android Auto will also be integrated. Active safety features include lane departure warning with steering correction, frontal collision and pedestrian warning with braking, blind-spot detection, rear cross-traffic alert, and more.

The entry-level 2020 Audi A5 Komfort is delivered with a 10.1-inch screen with Audi’s MMI interface, Apple CarPlay, and Android Auto, SiriusXM, and more. Most of the 4 Series’ standard active safety features are included with the more expensive Progressiv trim.

Although both cars are gateway vehicles, they can be fitted with the latest tech, large digital instrument clusters, ultra-high-end audio systems, heads-up display, and more. Performance and handling enhancing options are also on the menu.

These cars act as eye candy for their respective brands. They both present limited volume potential but their presence in commercials and advertising is crucial. They set the tone for each brand and create desire. While few will buy them, they will attract many buyers into the brand and get them to drive away with an Audi Q5 or BMW X3.

For those who are not quite ready for SUV life yet, both the Audi A5 Coupé and BMW 4 Series Coupé project the message that the owner is up-and-coming or already successful at what they do. The experience had by owners and drivers of these cars will have a direct influence on whether or not they move into an Audi A8 or Q8, or a 7 Series or X5 later on.

Ignoring the 2021 BMW 4 Series Coupé’s grille is impossible. The only ray of hope lies in the fact that we’ve not yet seen the car in the flesh. It could be that it won’t be as bad as it seems…

Thing is that the new 4 Series will be an incredible driver’s car. The current G20 BMW 3 Series is fantastic, so long as the right features are selected. And thankfully, we spend the very vast majority of our time within the car when we’re around it, so the grille won’t be an issue.

The Audi A5 Coupé is a superb automobile. Its best trait is that it is a laidback sporty coupe that projects panache to onlookers all the while keeping its occupant perfectly comfortable and at ease within.

If we were to stick to the 4-cylinder A5 and 430i, we’d opt for the Audi. However, S5 would lose out the M440i xDrive. Our expectations are very high for this car.

The automaker has already signed an agreement with the federal government. Other sites in North America are still being considered. This will be...
Read more
Previous articleRobert Pattinson’s Batmobile Will Look Like This in The Batman
Next articleElektron One EV Will Have 1,341 Horsepower And Looks Gorgeous