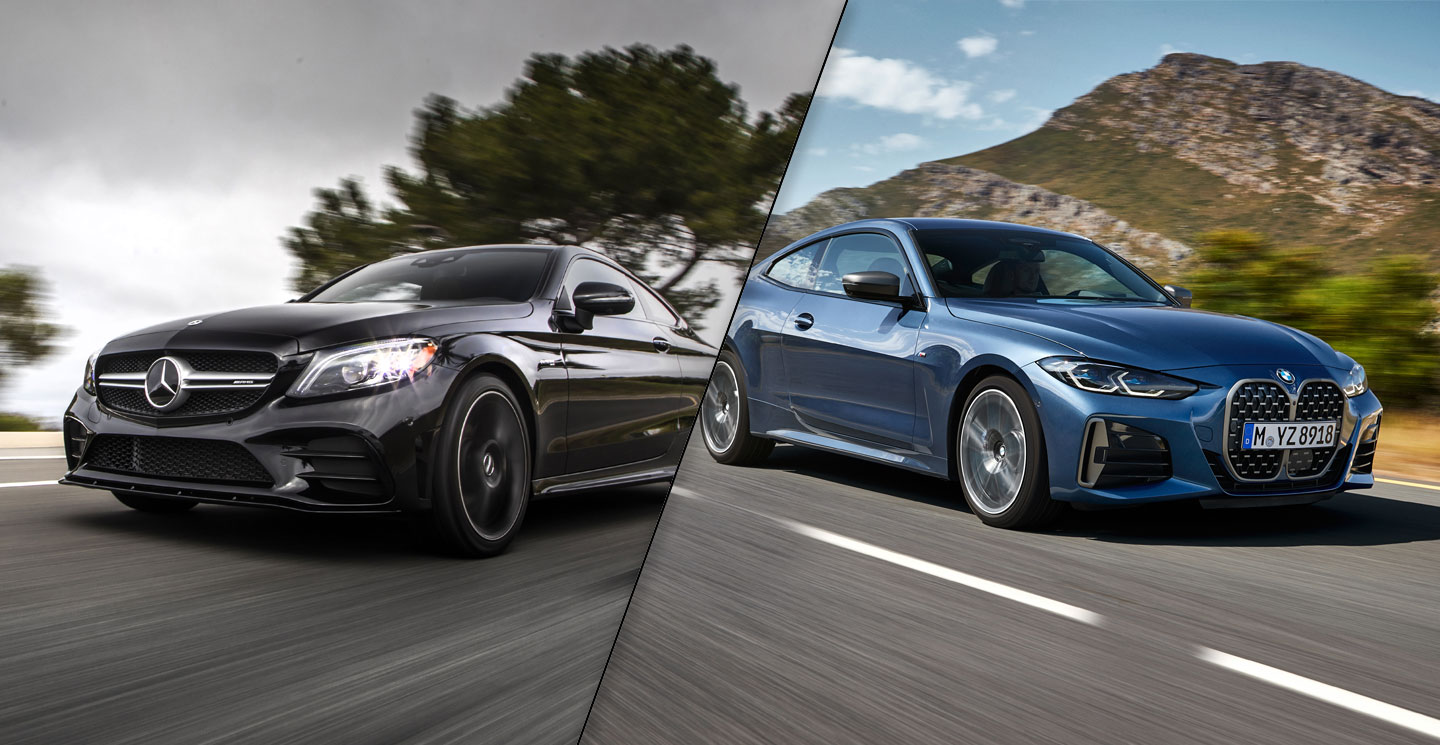 The 2021 BMW 4 Series Coupé is all-new and looking to take a bite out of the 2020 Mercedes-Benz C-Class Coupe’s hide.

Many fans would love the opportunity to debate the merits of Mercedes-Benz over BMW, and vice-versa. Better, faster, more reliable, more luxurious, the arguments would never end but all would agree that both brands have extensive experience when it comes to designing and building luxury coupés. This rivalry, between the 2021 BMW 4 Series Coupé and 2020 Mercedes-Benz C-Class Coupe, began decades ago.

Sticking a close as possible to direct lineage, the BMW 4 Series goes as far back as the mid-60s with the beautiful and segment-defining 1600 and 2002. Everyone knows about the 3 Series which spawned the 4 Series back in 2014. While many 3 Series diehards deplored BMW’s idea to split the 3 in two, fact of the matter is that the cars are nearly identical. That is, save for one rather large detail. The all-new G22 2021 BMW 4 Series was recently revealed and it will fiercely compete with the C-Class Coupe.

The compact new Mercedes-Benz Coupe also has much history as its ties go as far back as the much-loved W201 190 Series sedan from the early 1980s. There would be no coupe model until two generations later, the W203, when the C 230 Kompressor arrived around 2001. It was a 3-door hatchback but the Kompressor was the beginning of the C Class Coupe. Then came the C 230 K and C 320 but they didn’t last very long. At the time, there was also a CLK coupe and convertible available however they were related to the E Class, despite the name. However, when it passed, the C-Class Coupe was officially born in 2011. And remains a popular car today.

Now, there are other coupes in this exclusive segment, however, other than the Audi A5 and our stars, the BMW 4 Series and Mercedes-Benz C-Class Coupe, the two Japanese offerings are inconsequential. The Infiniti Q60 and Lexus RC do exist, but that’s about the extent of it.

There are rumours that an M440i RWD will also be offered however we do not know if it will be available in Canada. Should it come, we don’t think it will undercut the M440i xDrive by much, if at all. The anticipated M4 Coupé should be priced in the mid-$80,000 range in Canada. The new 4 Series Coupé is scheduled to arrive in October.

The 2020 Mercedes-Benz C 300 4MATIC Coupe is powered by a turbocharged 2.0-litre 4-cylinder that produces 255-horsepower and 273 lb.-ft. of torque. If you’re keeping track, these specs are extremely similar to that of the 2020 Audi A5. All trims include Benz’s 4MATIC AWD system and a 9-speed 9G-TRONIC automatic transmission.

For 2021, the BMW 430i xDrive receives an updated TwinPower turbocharged 2.0-litre 4-cylinder that produces 255-horsepower and a segment-leading 294 lb.-ft. of torque. The M440i xDrive features a TwinPower turbocharged 3.0-litre 6-cylinder engine which delivers 382-horsepower and 369 lb.-ft. of torque. Unique to the 440i, the new 48-volt mild-hybrid system can boost power by up to 11-horsepower under hard acceleration or provide energy for electronic systems when coasting under little to no engine load. Both powertrain include BMW’s xDrive AWD system and an 8-speed automatic transmission.

The M440i xDrive is the equivalent to the Mercedes-AMG C 43. It will launch to 100km/h from a standstill in only 4.5 seconds. As for the expected M4, it should receive the BMW X3 M’s new twin-turbo, 3.0-litre inline-six that develops 473 horsepower and 443 pound-feet of torque, to start. A Competition edition should be entitled to the 30-horsepower boost for a total of 503. And we know it will be very fast.

It’s been over a week since the all-new G22-generation 2021 BMW 4 Series was introduced and the automotive media is still having a field day with the car’s oversized kidney grille. Even if we all know more or less why BMW opted to go in this design direction (it is a respectful throwback to the legendary and coveted BMW 328 from the mid-to-late 1930s), no one, if perhaps less than a handful of legally-blind people, will ever refer to the design decision as being a good one.

There are countless renderings on the internet that depict what the new 4 Series Coupé could look like with the previous generation’s grille. What doesn’t change anywhere is the new Coupé’s lines are subtle and exquisitely sleek.

The 2020 Mercedes-Benz C-Class Coupe does suffer, in our opinion, from one mild design flaw. The proportion between the door’s length and the wheelbase is off. In other words, there’s too much rear quarter panel behind the door and ahead of the rear wheel. Otherwise, it’s another beautiful and elegant Mercedes-Benz.

When stepping aboard, the fact that the BMW is newer is immediately evident. Despite that, the Benz’s can still serve up large screens although the BMW’s dashboard is more dynamic and modern. Both cabins are extremely luxurious and well-appointed.

The entry-level 2020 Mercedes-Benz C 300 Coupe includes standard features such as heated power front seats, a 7-inch screen, LINGUATRONIC voice control, and other elements. Must-have niceties like Apple CarPlay and Android Auto and SiriusXM are all optional. Included safety technology will be active braking assist, blind spot assist, and others. Most active features such as lane-keeping assist and others are optional.

At the moment, much like pricing, we do not hold all the product and trim specifications for the new 2021 BMW 4 Series. However, the initial press release does state the car will be equipped with BMW’s Intelligent Personal Assistant which responds to a “Hey BMW” spoken prompt. BMW’s iDrive 7 with navigation, along with Apple CarPlay and Android Auto, will be standard and be displayed on an 8.8-inch screen, or the available 10.25-inch infotainment monitors.

There’s no shortage of upgrades that can be selected for even the most basic trims. Larger screens, digital instrument clusters, head-up displays, and many more are all available.

For the three German luxury car brands, these cars fill a niche for conquest purchases. As they are far from the most expensive coupes in their respective product portfolio, they serve as a lure to get a buyer hooked on the brand.

In that respect, they are extremely important. From another point of view, their continued low sales volume, compared to their salon counterparts, has no impact on the company’s bottom line.

In BMW’s corner, the new 2021 BMW 4 Series Coupé is (was?) supposed to serve as an indicator of the car company’s dedication to sporty, dynamic and emotionally-packed driving machines. While the driving experience will surely be tantalizing, the styling faux-pas may backfire.

With the exception of the Infiniti Q60 and Lexus RC, there are no wrong choices here. Even if we haven’t driven the new BMW 4 Series Coupé, we know it will meet and potentially surpass expectations. As the Benz and Audi are familiar, we know they deliver the goods.

About the goods, and ever we’re getting tired of bringing it up but, the Bimmer’s grille is impossible to ignore. We fear that instead of impressing your friends with your new ride, you might be ridiculed. A portion of this response will undoubtedly be linked to jealousy but in order to avoid this off-chance this might happen; the Benz is a safe option.

Having said that, the Audi A5 comes out on top as our favorite car of the trio, at least when it comes to the base models. Besides, if we were in the market for a Mercedes-Benz C-Class, this would be it:

GM will maximize the Corvette’s name recognition. The line-up will consist of premium sporty vehicles. Also, there’s too much money to be made by...
Read more
Previous articleConfederate Flag Banned From NASCAR Race Events
Next articleABT’s Audi S8 Tune Is Perfection