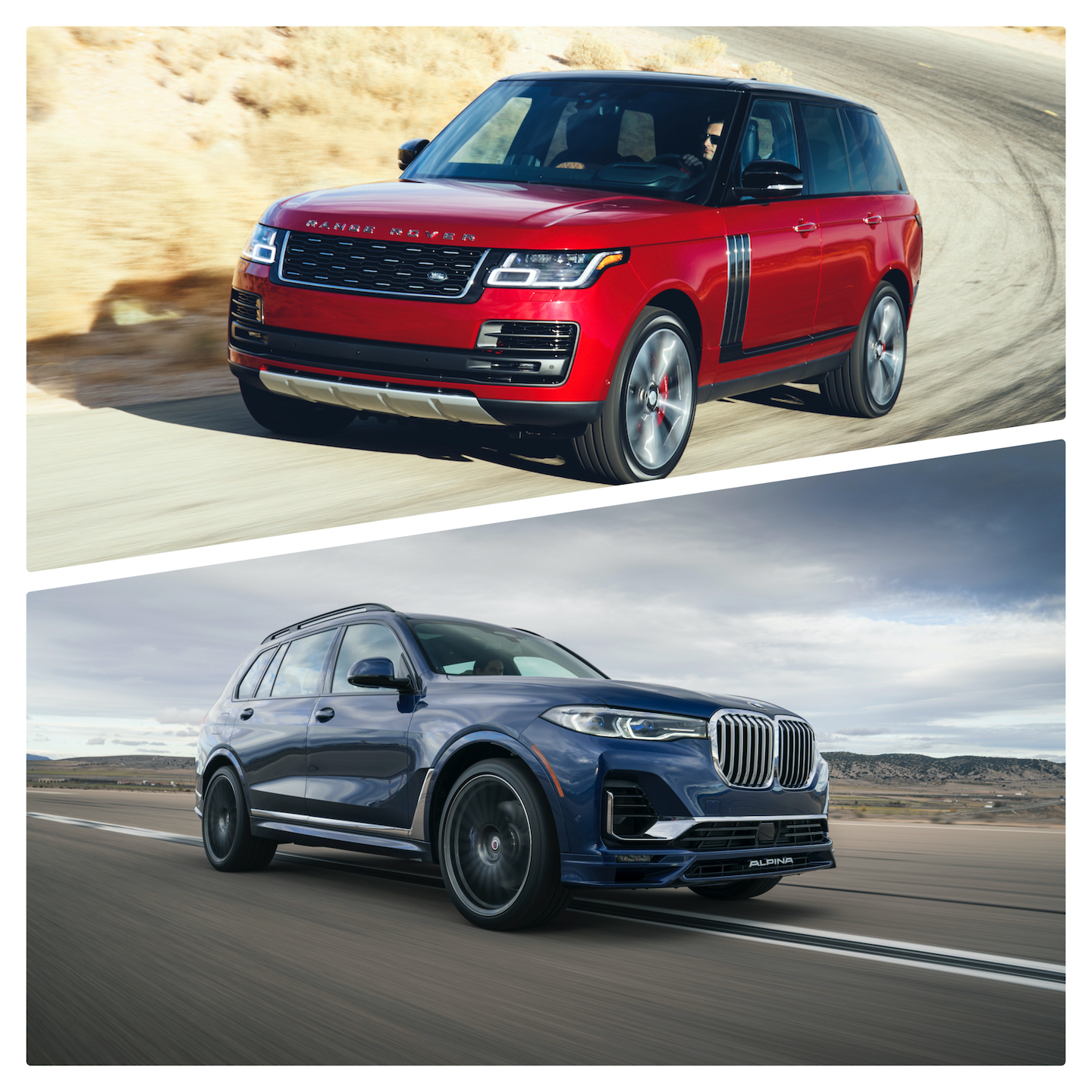 These two vehicles are the absolute pinnacle of their breed.

The very wealthy will go to extra lengths to get the latest, greatest, and most expensive of anything money can buy. Other than a mansion and a yacht, a car is usually the most visible display of wealth. Apologies, a luxury SUV, preferably a high-powered one that may or may not be oversized to truly get the point across, is by far the biggest showpiece one can buy. Nowadays, there are many to select from and there are more on the way. The Range Rover not too long ago sat at the very top but its position has come under challenge many times. Most recently, from BMW in the form of the ALPINA XB7.

There’s no shortage of models in these upper echelons of the hyper-luxury and powerful SUV. If somewhere around 500-horsepower and six figures are starting points, you’ll find the Lamborghini Urus, Audi RS Q8, Aston Martin DBX, Porsche Cayenne Turbo, Bentley Bentayga, Rolls Royce Cullinan, Mercedes-Benz GLS 580, G Class and current and upcoming AMGs, and finally, a number of Range Rover products and a few BMWs such as the X5M, X6M, and X7. Even Ferrari’s getting in on this but in the meantime, we’re going to compare one of the first players in the segment to the latest addition.

The Range Rover, that’s the Ultimate Range Rover, may face competition in ways it never had only ten years ago, it remains a bastion, a flagship, a pillar of luxury – it is royalty. Its position and aura have been infused in all Land Rover and Range Rover products but there’s only on Range Rover.

At BMW, the new X7 arrived less than a year ago but, out of the box, it defied the entire established and quickly rose in the ranks as a spectacular luxury SUV. With it, ALINA has created what could more or less be considered the X7M, but better. Beyond exclusive and attractive, anything ALPINA touches turns into gold and the all-new 2021 BMW ALPINA XB7 certainly seems golden.

With at least $170,000 in hand, one of these two super-SUVs could find itself in your five-car garage alongside your McLaren, Ferrari, and your 1963 Chevrolet Corvette Stingray weekend toy. So which one will it be?

The current-generation Range Rover was introduced way back in late 2012 and continues on to this day. Despite the vehicle’s relative age, Jaguar Land Rover (JLR) has continued to upgrade the SUV with the latest technologies and safety features.

The Range Rover’s price structure varies immensely. The Standard Wheelbase unit starts at $114,000 while the Long Wheelbase begins at $127,000. With powertrain and various other options, a Range Rover LW can more than double in price, easily exceeding $275,000. The model of interest for this comparison test is the Long Wheelbase SVAutobiography Dynamic trim which sports a whopping sticker price of $236,000.

As for the BMW ALPINA XB7, it starts at $165,900. It is based on the X7 M50i which is, all things considered here, not that pricey at $114,050. Options such as the Dynamic Handling, Advanced Driving Assistant, and Premium packages increase add nearly $20,000 to that amount.

And so, that means ALPINA injects $30,000 worth of upgrades such as more power, finer interior materials, visual upgrades, ALPINA-specific display configurations as well as sublime 23-inch iconic ALPINA CLASSIC 20-spoke wheels, and other delightful stuff. There are a few options but all told, pricing should remain well below the $200k mark.

Which Has The More Powerful Powertrain?

Opting for the Long Wheelbase Range Rover locks you into a supercharged 5.0-litre V8. The “lolly” HSE and Autobiography trims limit output to 518-horsepower and 461 lb.-ft. of torque. The SVAutobiography delivers a more credible 557-horsepower and 516 torques. With this power, the 2,606 kg (5,735 lb) mega-SUV launches to 100 km/h in 5.4 seconds and on to a governed top speed of 209 km/h.

The BMW ALPINA XB7 handily wins this round. The twin-turbocharged 4.4-litre V8 generates a satisfying 612-horsepower and 590 lb.-ft. of torque. Like the Rover, it also uses an 8-speed automatic transmission but, and despite tipping the scale at a nearly identical weight, the XB7 rockets to 100 km/h in only 4.2 seconds, flattens the ¼ mile in 12.6 seconds and tops out at a limited 290 km/h.

Both super SUVs feature impressive features such as electronic air suspensions, adaptive damping, and other related feature including drive modes but each SUV has different limits, as it were.

The Range Rover will tow 7,500 lb, wade into 900mm of standing water without hesitation, holds serious approach and departure angles, can tackle all surface conditions thanks to the included Terrain Response 2 system all the while seriously pamper its occupants. The BMW ALPINA includes rear integral steering, a serious Sport+ drive mode, electromechanical anti-roll bars, an electronically-variable active rear limited-slip differential,  and other elements to make this big brute handle like no other.

What About Style, Size, And Space?

For these SUVs, everything about them needs to be big, bold and badass. Even so, the Range Rover is far more subtle when it comes to expressing its standing. Its powerful and regal demeanor is noticed and understood – the fact that it is a Range Rover is unmistakable. The BMW ALPINA XB7 is far bolder, in your face and unapologetic. This is more a result of BMW’s design decisions than ALPINA’s visual enhancements. I think we can all agree that both look appropriately expensive.

Both SUVs are far close in size than expected. Remember, we are comparing a BMX X7 to a Long Wheelbase Range Rover. As such, the X7 is 5,164mm long, compared to the RR LWB’s 5,200mm. Widthwise, they are identical, or 3mm apart. Height-wise, the BMW is 62mm shorter at 1,806mm tall, which explains in part its sportier stature. Crucially, the Rover’s wheelbase measures in at 3,120mm compared to the X7’s 3,104.

The BMW ALPINA XB7 offers plenty of room for all occupants six (or seven) all the while providing an extremely capacious boot when the third row is stowed. Contrary to what many believe, the Range Rover is a 5-seater in both the Standard and Long-wheelbase models. The latter’s second-row passengers are treated to acres of room. The trunk, here too, is enormous. 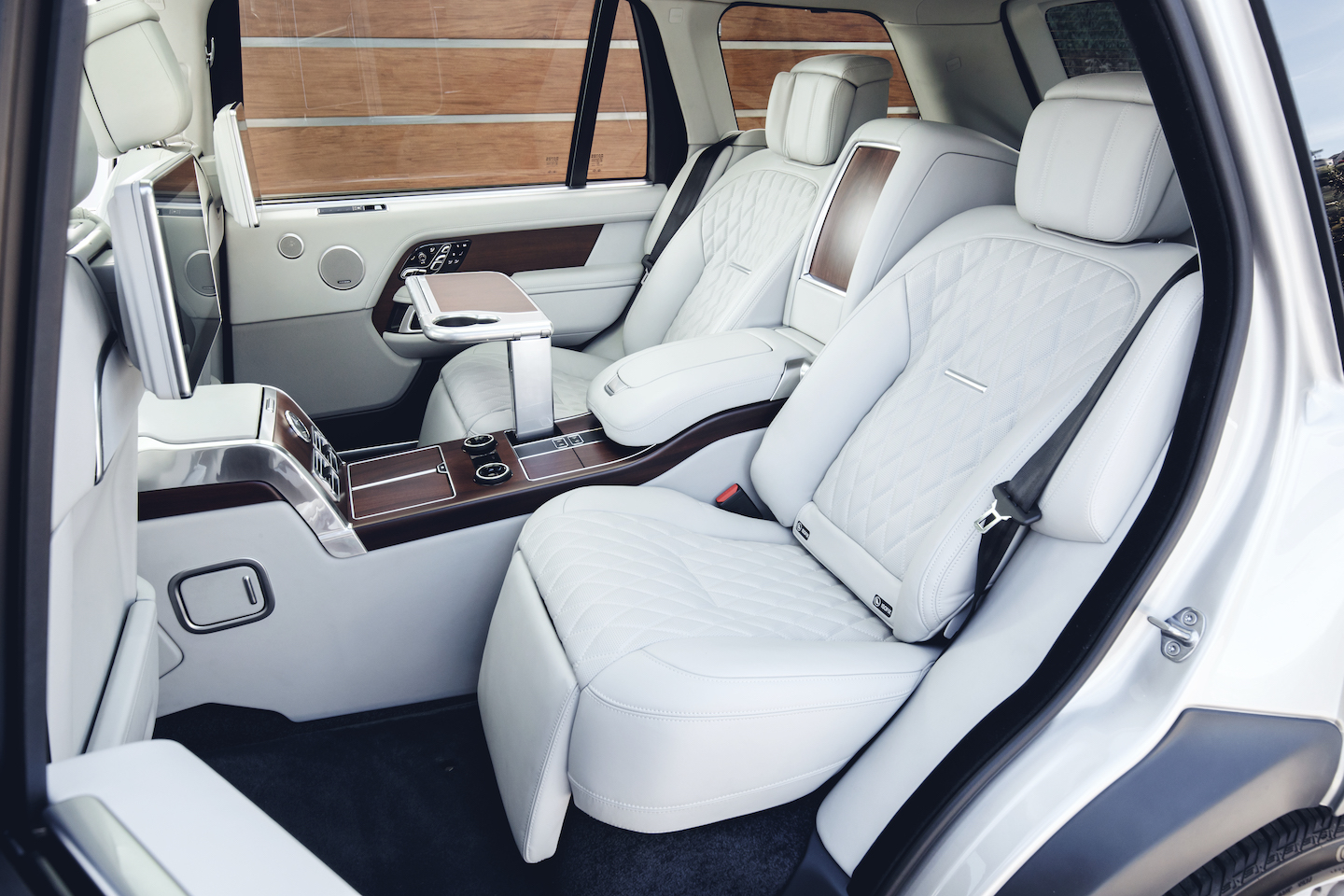 If we were to take the time to enumerate to list of standard features in both the BMW ALPINA XB7 and the Range Rover SVAutobiography, you’d need to plan your next two meals from right where you are…

The BMW’s so-far shared highlights include Multicontour Seats, a 12.3-inch screen and 12.3-inch driver display, and in the safety department, it gets adaptive cruise control, lane-keep, and braking assist, and more.

The Range Rover’s list of amenities, despite the BMW’s being incomplete, is greater however we must remember that the SVAutobiography starts at $236,000, compared to the ALPINA’s $165,900.

In both cases, we are referring to flagship SUVs. When it comes to Range Rover, there’s only one Range Rover. All other SUVs in the brand’s lineup are borrowing the name… But seriously, the Range Rover is a name with historic significance, with rugged off-road capabilities built-in and, from the last 30 years or so, is also a beacon of technology and luxury.

The BMW X7 is all-new but no one will ever mistake for anything else than the German luxury brand’s top SUV dog. AS for ALPINA, it’s a little different. Their history and reputation are rooted in sport sedans and wagons however SUVs have become increasingly important for visibility and volume for the tuning company. The ALPINA XB7 presents an enormous opportunity to not only introduce the brand to a broader audience but also, we assume, make lots of money.

Whether this is fair or not, the Range Rover has no chance against the ALPINA. The Rover’s age certainly hurts it and the fact that it’s “common” is a point in the XB7’s favour. No matter what, the ALPINA will always be a more exclusive vehicle than the Rover. The extra performance without sacrificing luxury and comfort is without a doubt another feather in the XB7’s cap.

The Range Rover SVAutobiography is special but the BMW ALPINA XB7 is unique, more exclusive, and quite frankly, far more appealing for “new” money.

The new Lyriq Tech trim level will be responsible for this $4,400 discount over the 2023 base price. This version will forgo some...
Read more
Previous article2021 Ford F-150 Will Debut on June 25
Next articleNew 2021 Lexus IS Teased In an Official Image