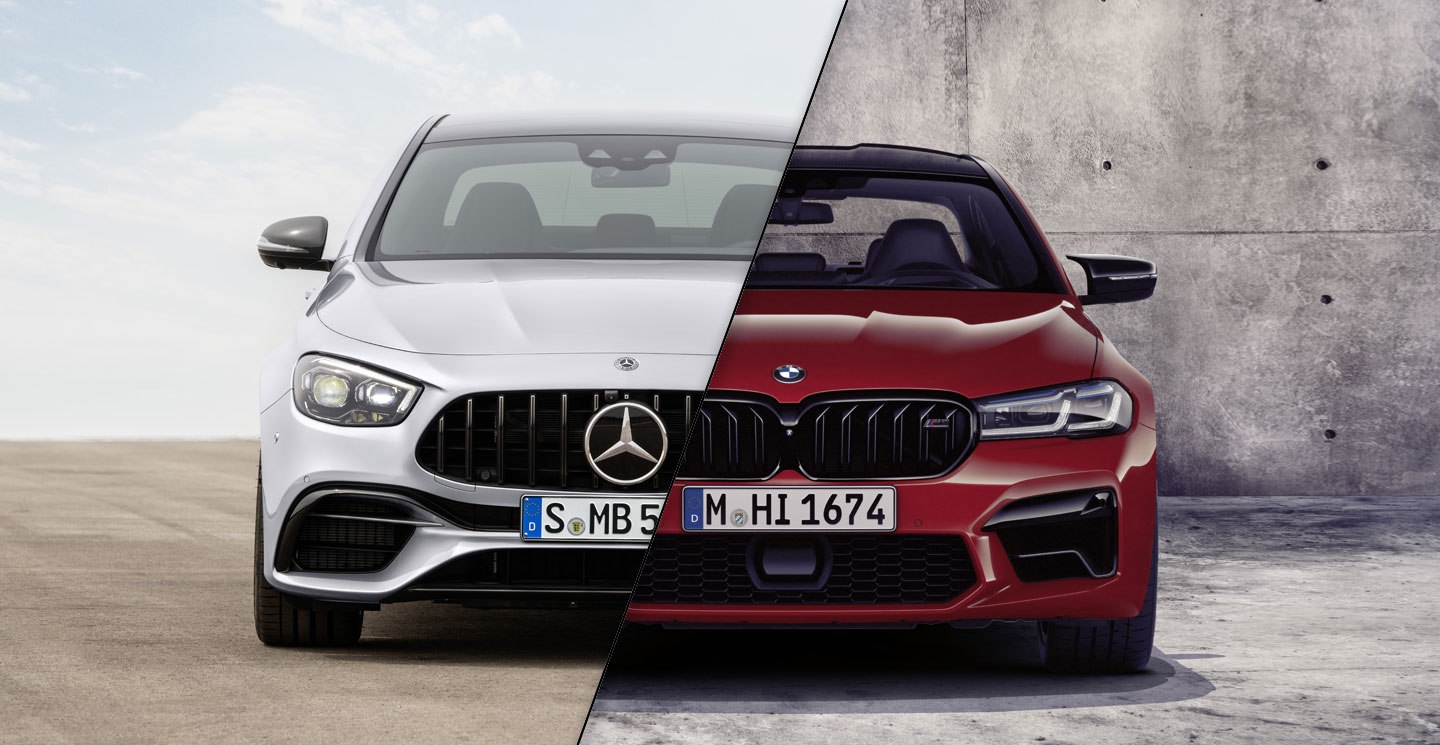 No matter the stratospheric rise in high-powered, big-money SUVs, those seeking real power in every sense know that nothing can replace a luxury sedan, except a wagon of course… Few, if any other cars better express or project “power”, knowledge, and street-cred as well as the BMW M5 and Mercedes-AMG E 63 S, well, unless the AMG is a wagon or you happen to own an Audi RS 6.

Both the F90 BMW M5 and the W213 Mercedes-AMG E 63 S were born in their current generation in 2017 and both went under the knife recently and emerged only this past week with subtle visual improvements and a continued insatiable desire for speed and performance.

For this comparison, introductions are not necessary as both the BMW M5 and AMG E 63 are deeply rooted in automotive lore, legend, and fandom. Perhaps it’s useful to remind all that the BMW M5 holds a smidgen more history, officially launching a few years before the E 63’s oldest ancestor, the delightful 500 E. The first actual real-production AMG E-Class, the E 55, launched in the late 90s. The M5 has always been an M5, kind of.

It’s no secret that these cars have gone from pure, albeit perfectly balanced, muscle cars to surface-to-surface missiles with more computing power than NASA and Space X combined. And in the process, they’ve begun catering to a more sophisticated group of buyers, with deeper pockets, and a desire for the richer, nicer things in life, including comfort.

Anyhow, let’s compare specs on both these cars but be warned, the AMG E 4MATIC+ wagon wins, no matter what.

The playing field is nearly level here. These two super-saloons hold nothing back, or nearly, when it comes to power. Yes, we know that an electric motor can generate far more twisting power than these two sublime boosted V8s, but just let us have our fun while we still can.

As stated earlier, although the new M5 and E 63 S have been updated, they carry on with the same mills as before. This means the AMG is endowed with a handcrafted twin-scroll twin-turbocharged 4.0-litre V8 engine. Output is rated at 603 horsepower and 627 lb.-ft. of torque from 2,500 to 4,500 rpm. The sedan, and the wagon, send the power to Mercedes’ AMG Performance 4MATIC+ variable AWD system with electronically controlled rear locking differential via a specially-tuned AMG SPEEDSHIFT MCT 9G 9-speed automatic transmission.

The BMW is up on displacement by way of its twin-turbocharged 4.4-litre V8 but is down on statistics. Its output is rated at “only” 600 horsepower and 553 lb.-ft. of torque. But not all is lost! The BMW M5 Competition model faithfully returns with a 17 horsepower boost. AWD is the only way to keep the BMW going in a semi-straight line so a heavily bolstered version of the company’s xDrive system, complete with rear-wheel bias, is included. As is an M Steptronic 8-speed automatic gearbox

How fast are these cars? Quite. Oddly though, the Mercedes-AMG E 63 S sees its official 0-100 km/h (0-62 mph) times increase from 2020’s stats for 2021 by 0.2 seconds to 3.4 seconds for the sedan while the wagon needs 3.6 seconds. The M5 does marginally better with a little less as it covers the same sprint in 3.4 seconds for the regular version. The Competition improves the time by 0.1 seconds to a supercar-matching 3.3.

Not having driven these cars does not mean that we cannot accurately predict that both will be immensely capable road and track cars. If we had to place a small bet on which car can be more civilized when required, we’d put our chips on the AMG. In fact, the suspension’s been recalibrated for more comfort when so desired. The new M5 also receives revised damping for a greater deal of ride comfort – yes, this is where these cars are headed.

Despite the need for a cushier ride, both cars can let the rear-end hang loose in a full-on drift with accompanying smoke-show, also, if so desired. Their breadth of abilities seemingly has no known limits.

Styling Inside And Out

Life certainly is good for those in the market for these cars. Because we’re talking about sedans (and a gorgeous wagon) and not 2-door sports cars like the AMG GT, styling cues and updates, are generally very German, that is to say, subdued and tasteful.

If you don’t know, you might notice something “off” about an M5 or an E 63 S but if you’re in the know, here’s what you need to know.

The new 2021 Mercedes-AMG E 63 S 4MATIC+ cars include a new front-end that bares the larger AMG-specific grille. The headlights are flatter, all-LED, and herald two of the car’s most important design elements: the subtly flared fenders (now 27mm wider) and the power-dome hood. The rear is lightly restyled too with horizontal taillights on the sedan. As for the cabin, it remains as elegant as ever and now features the latest version of MBUX and a new steering wheel.

The 2021 BMW M5 gains new headlights with L-shaped DRL or, optionally, BMW Individual Shadowline adornments. The grille, front air intakes, and all bumpers are tweaked for a little more visual muscle and presence. The cabin is upgraded with a 12.3-inch central display, new leathers, and various other small improvements.

From afar, both the M5 and E 63 S are clearly top-dog members of their respective brands and model lines and it’s possible that they won’t catch the eye at first glance. Once they’re spotted, and heard, however, double and triple takes ensue.

The BMW M5, much like most BMWs from the 70s and 80s, created new segments and set the tone for what these new performance sedans needed to be. With the sole exception of the 2005-10 E60 M5, and even then, all M5s have been the yardstick by which all others of the same kind are measured.

The new 2021 BMW M5 is not a departure from the 2020 model but with a revised exhaust system that will address the only real “issue” with the car, it will undoubtedly be exceptional.

The Mercedes-AMG E Class offerings have also proven to be outstanding cars among in every respect. The latest generation of the E 63 S is by far the most complete and competent it’s ever been and, well while on the subject, nothing quite sounds as right as a V8 AMG car or SUVs, we suppose.

The new 2021 Mercedes-AMG E 63 S 4MATIC+ is as appealing as the M5, if not more in fact. No, we’re not talking about the wagon, although that’s the one we’d take. We’re referring to the fact that the AMG E 63 S is, as brutish as it is, more elegant, more mature and sophisticated, at least visually.

It features two new hybrid powertrains. The CX-90 is not only the most powerful Mazda ever but the most luxurious. Mazda Canada has just...
Read more
Previous article2021 Honda Pilot Gains Value-Packed Special Edition
Next articleCountless Trucks Fans Will Tune In On June 25th To See The All-New 2021 Ford F-150