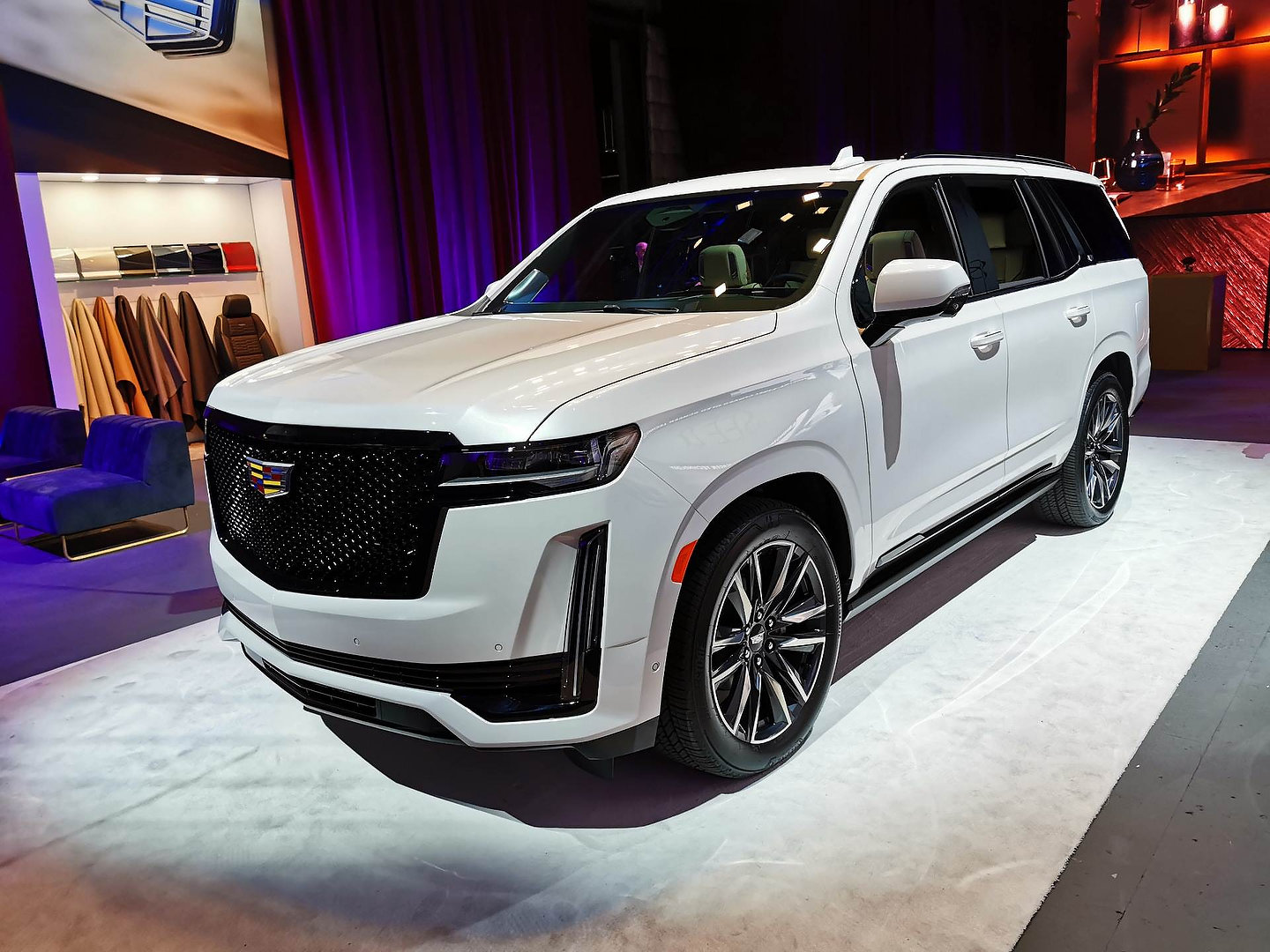 The new Escalade follows in the footsteps of the GMC Yukon and Chevy Suburban/Tahoe unveiled in January and December respectively. As was the case with the first Escalade which birthed the luxury full-size SUV segment in 1998, the 2021 Cadillac Escalade has some exclusive goodies you won’t find on the still-luxurious new-gen Yukon and Suburban.

That said, let’s start with the similarities.

Powering the 2021 Cadillac Escalade is a 6.2-litre V8 that delivers 420 horsepower and 460 lb.-ft. of torque. It’s similar to the V8 in the current Escalade but features Dynamic Fuel Management technology to improve efficiency.

There’s a big change under the hood of the Escalade, but we’ll get to that in a sec.

That’s roughly the similarities between the new and old Escalade, and with the rest of the GM full-size SUV lineup. Yeah, the thing is pretty much in a class of its own.

Inside, like the Suburban, Tahoe, and Yukon, there’s a lot more space in the redesigned 2021 Escalade. The cargo area will offer 80 percent more space (773 litres) with all seats in place that families will love. There’s also a lot more legroom in the third row, notably, but across the board, the Escalade is more versatile than the previous generation.

Part of what makes the Escalade more spacious is a new independent rear suspension. Gone are the days when the big Caddy would bound over train tracks or potholes like a GMC Sierra. The independent suspension brings the Escalade into the 21st century, makes a whole lot more comfortable (we expect), and makes it easier to get to the second and third row.

As Expected, There’s a Ton of Tech in the 2021 Cadillac Escalade

It’s also packed with a lot more tech. It all starts with a new, 38-inch paper-thin curved OLED screen that is the definition of an automotive conversation starter. Prepare to answer questions whenever someone hopes on your Escalade for the first time.

Cadillac also added what it calls Augmented Reality-enabled navigation to the Escalade. The system uses real images of the street you’re driving on and adds directional information in these images. A 2-megapixel bird’s eye view four-camera system is standard, and we imagine it will provide a much crisper surround view of the Escalade compared to most top-view systems.

Other noteworthy features include soft-close doors, dual 12.6-inch rear infotainment screens for the kids, night vision, 22-inch standard wheels, and a ridiculous 36-speaker AKG sound system. There’s a 19-speaker audio system included in there as well as conversation assistance that captures the voice of the people upfront and transmit to the back.

More on tech, the Super Cruise system in the 2021 Escalade gets Automated Lane Change functionality. Just put on your turn signal and the system will check if the coast is clear. If it is, the Escalade will change lanes for you.

The biggest news about the 2021 Cadillac Escalade is the addition of a new turbodiesel engine. Well, it’s not the biggest news, but it’s certainly the most surprising. Cadillac did not elaborate too much on specs or towing capacity, saying only that it delivers 460 pound-feet of torque like the V8. We’re guessing it’s the same 277 horsepower as the other 3.0-litre turbodiesel engines available in the GM lineup. A 10-speed automatic gearbox connects to both the diesel and V8 engines.

The 2021 Cadillac Escalade will go on sale this summer.

The first 100 EVs will arrive at selected stores across the United States this month. This will help Domino’s save on fuel and...
Read more
Previous articleMazda Is Working On A New Inline-6 Cylinder Engine And An 8-speed Automatic Transmission
Next articleDodge Durango Hellcat Likely Headed For Production

Like Audi models, there are different versions of quattro. We drive a new S3, RS 6, and RS e-tron GT around Circuit Mecaglisse...
Read more
Features

It’s no secret that Toyota likes to throw in a few Easter Eggs into their new cars and trucks. Their latest model, the 2022...
Read more