2021 Cadillac Escalade Super Cruise Quick Review: A Big SUV That Can Handle Itself

The Escalade with Super Cruise drives almost like you would

The 2021 Cadillac Escalade introduced to the market this year is the latest Cadillac model to get Super Cruise, the automaker’s semi-autonomous driving technology. It is also the biggest vehicle on the road with the ability to drive itself, although we’ll start with clarifying what that means.

It would be false to classify the Escalade with Super Cruise as an autonomous vehicle. The same can be said for a Tesla with Autopilot and Autosteer, despite what some including the company would have you believe. Where Super Cruise and Tesla’s AutoPilot differ from what you would find in a North American Mercedes-Benz or BMW, for example, is the ability to remove your hands from the steering wheel completely.

Most semi-automated systems require that the driver keeps their hands on the wheel. The Super Cruise system doesn’t impose this requirement to users. You do, however, have to keep your eyes towards the road. If you start looking down or in the back, the system will warn you to pay attention and disengage if you don’t heed the warning.

As long as you are looking ahead (doesn’t matter if you are wearing sunglasses, the system knows what you are doing), the Cadillac Escalade with Super Cruise automatically keeps you in the centre of the lane, will slow down if there is a vehicle ahead, and, new for 2021, if you toggle the turn signal it will change lanes for you as well.

If there is a construction zone or some other unforeseen problem ahead, the system will warn you and make sure you take control of the Escalade back. It does so through a very clear and in-your-face LED strip on the steering wheel. When green, Super Cruise is in control. When it starts flashing red, you need to pay attention and take control of the vehicle. 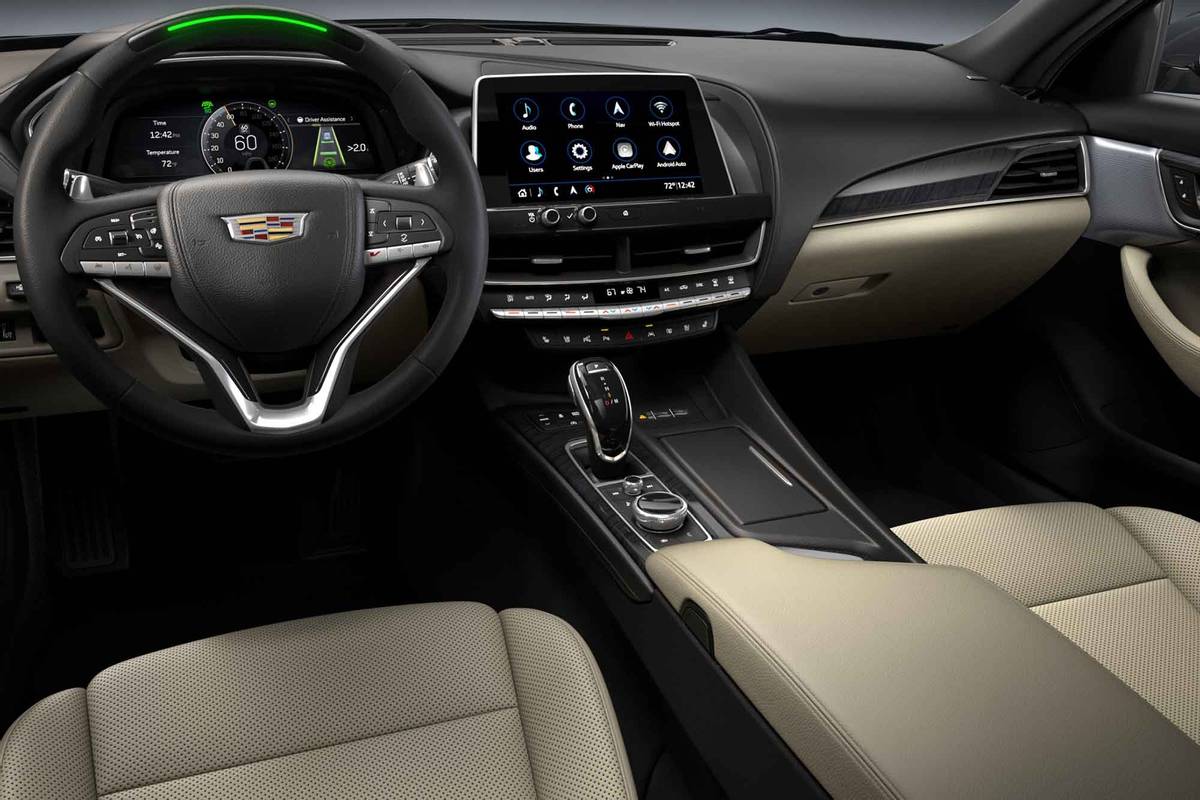 To make Super Cruise possible, Cadillac mapped hundreds of thousands of kilometres and miles of highways across North America using LiDAR. Think the Google truck mapping the road for Google Maps and you have the right idea. And they didn’t just map major highways, they pretty much mapped everything, from Interstate 90 crossing Montana to the entire I95 to the Trans-Canada Highway connecting Moncton to Halifax, Canada. They continue to map various highways and add areas where Super Cruise is available.

Thoughts on the 2021 Cadillac Escalade with Super Cruise

For this particular review, I wanted to focus on how natural the Super Cruise system feels. Personally, I’m not a fan semi-autonomous systems because most feel a little or very awkward. They don’t quite react the way a human would, they can be a bit twitchy and nervous, and they either react too soon, or not soon enough.

My goal with reviewing Super Cruise was to see if it was actually useful and enjoyable, or something most drivers will turn off or never use, using myself as a base line. If I would use it on a regular basis, I’m fairly confident most will because it means it feels natural and inspires confidence as opposed to making the driver periodically nervous.

Well, I have to say I was impressed with the Escalade’s Super Cruise. For starters, it doesn’t feel all that different from the Super Cruise system I tried in the Cadillac CT6 two years ago. That system was remarkably stable and felt very natural in the way it reacted to certain situations. I wondered if the Escalade, given its weight and size, would feel more cumbersome. It doesn’t.

Cadillac did a great job making sure the Escalade remains refined and luxurious in its handling and behavior with Super Cruise engaged.

The major differentiator with the Super Cruise system is how fluid the automated maneuvers feel. It doesn’t jerk the vehicle back to the centre of the lane, it smoothly redirects it as needed. When it slows down, it slows down like you were applying just the right amount of force to the brake pedal.

When a vehicle is approaching ahead, it doesn’t slow down too soon like the vast majority of adaptive cruise control systems, and when traffic picks up again it gets going quickly. There’s nothing worse on the road than holding up traffic behind you because your ACC system is slow to react.

The same can be said for the new automated lane change system in the 2021 Escalade with Super Cruise. It takes a second to check if the lane is clear, but it doesn’t seem any longer than it would take a human to properly confirm the coast is clear. The actual act of changing lanes is also pretty human-like.

The only annoyance really was the fact that it sometimes felt too close to the centre lane, meaning other vehicles that were either passing or being passed felt a bit too close for comfort.

Did I keep Super Cruise activated for my entire 400-kilometre (240 miles) highway trip? No. Could I have kept it activated? Yes, with the exception of four construction zones. I didn’t keep it all the way through because I prefer driving than watching a steering wheel move, but I was regardless very impressed by how fluid and refined the system is.

I was also confident enough to eat a sandwich while the vehicle was handling the highway ahead, and for once I didn’t get mustard on the steering wheel.

Saleen is on the cusp of launching new products. The next step is funding. The tuner filed with the Securities and Exchange Commission for...
Read more
Previous articleHyundai Santa Cruz Pickup Now Open for Pre-Order in Canada
Next articleShould You Buy a 2021 BMW X5?