First Reviews 2021 Ford Bronco First Drive Review: Everything You Expect It to Be

2021 Ford Bronco First Drive Review: Everything You Expect It to Be 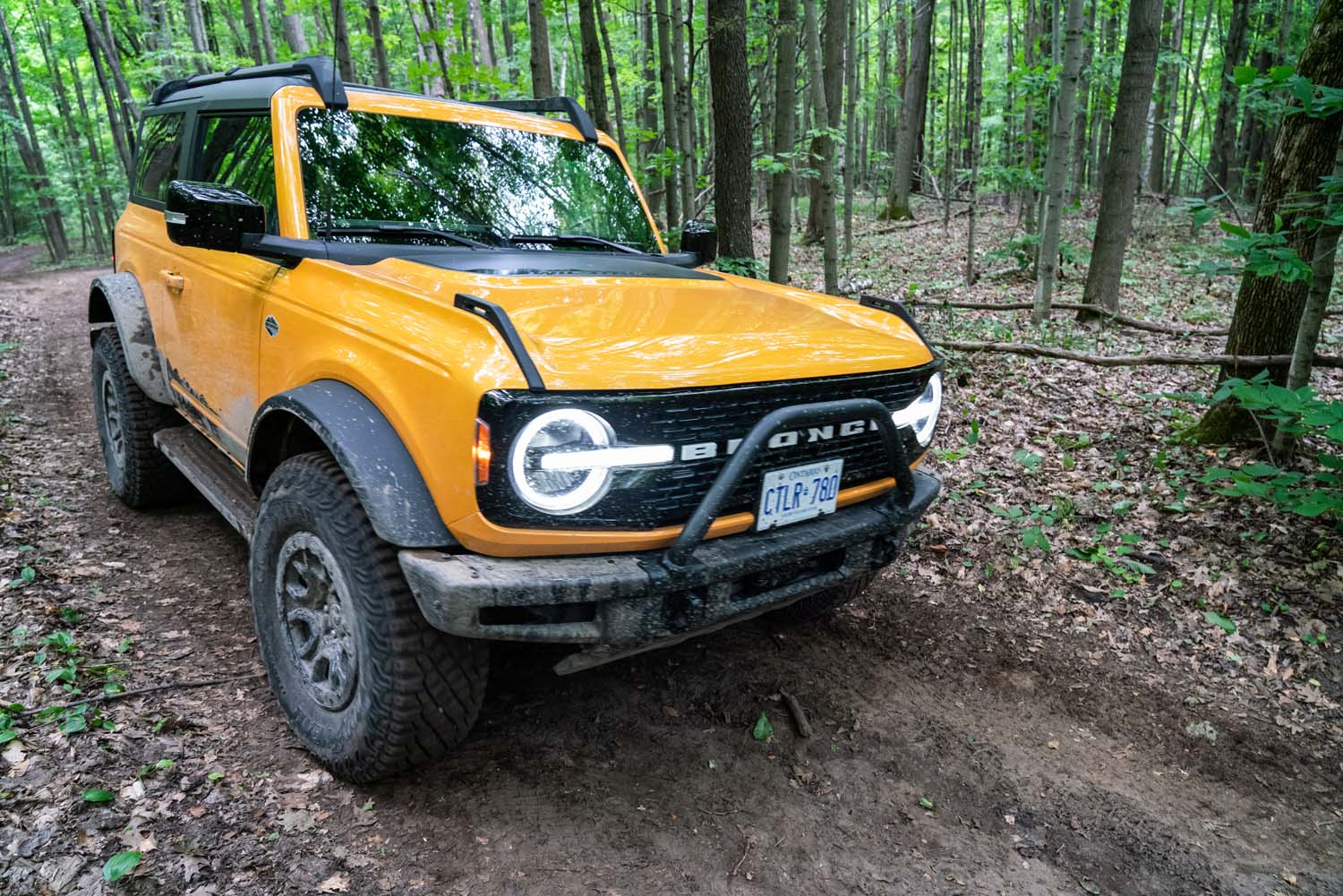 The Bronco has a lot of off-road tech, but the comfort on-road is one of its most surprising features

The return of the Ford Bronco is one of the most significant events in recent memory in the automotive industry. Next to the Corvette going mid-engine, the rebirth of Ford’s legendary SUV was probably the biggest news of 2019 and since the announcement was made, every single little Bronco detail has become newsworthy stuff.

Two years is a long time and most enthusiasts have probably formulated a clear idea of what the new model will be like to drive. We certainly have, and after finally getting behind the wheel of the 2021 Ford Bronco we can confirm that it is everything you would expect from a rugged SUV with that nameplate, with a few surprises on the side. 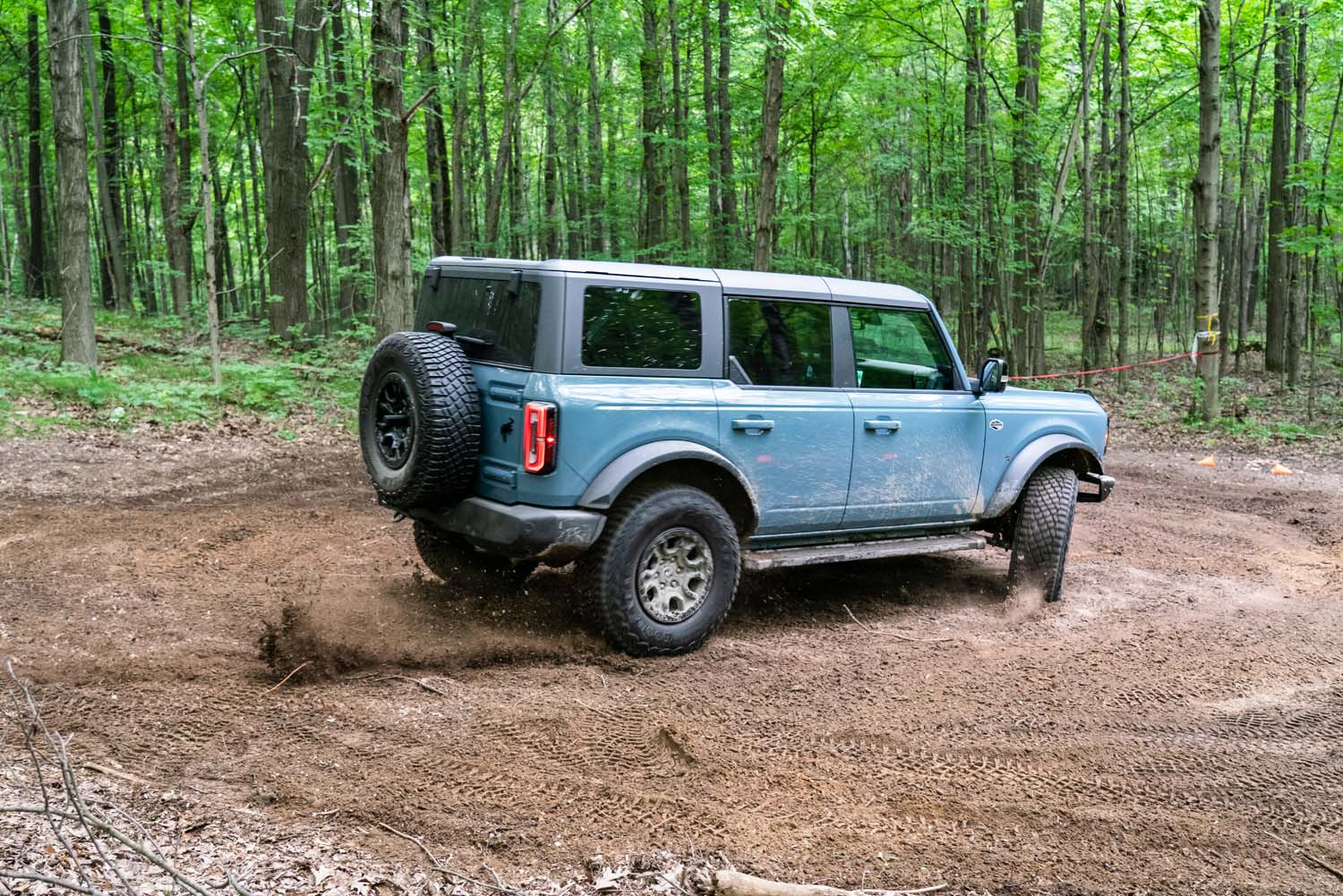 The latter is offered in every trim as an option except the top-of-the-line Wildtrak model where it is standard. This is the engine we tested, and it proved to have more than enough power for the needs of this type of vehicle. There’s a slight hesitation right off the line, but then the torque comes in quick and strong and the Bronco dives forward with confidence. 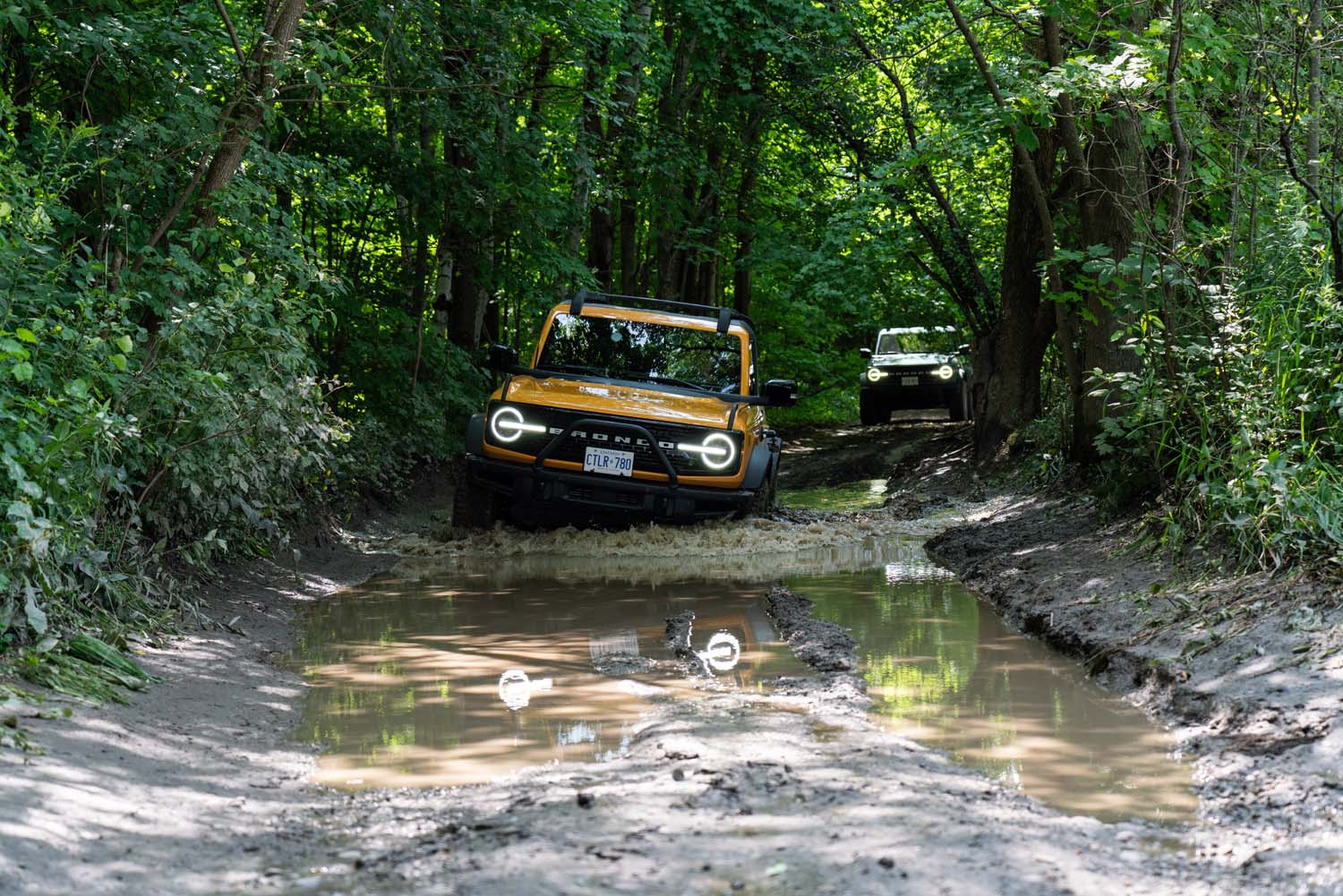 This rush of power gives the Bronco an immediate edge over the Wrangler by the way, regardless of whether you go with the diesel or the V6 in the Jeep. The Bronco feels quite a bit quicker with its 2.7-litre EcoBoost, but that is to be expected as it delivers significantly more horsepower and torque (the Wrangler V6 has 285 horsepower and 260 pound-feet of torque).

Although we will have to wait before testing the base 2.3-litre engine, the fact that the 2.7-litre EcoBoost is only $1,895 more in the US and $2,000 more in Canada makes it a no-brainer. 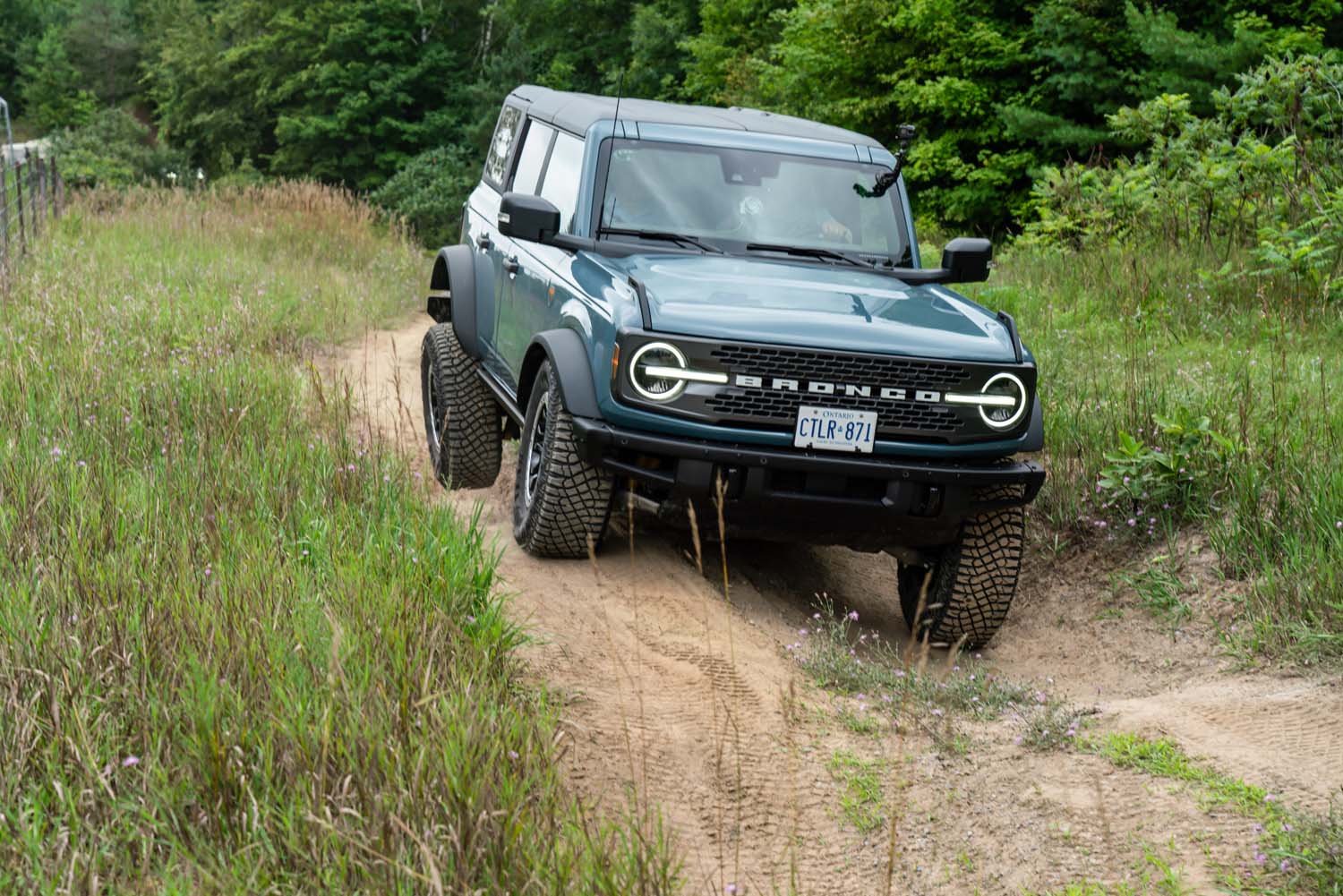 Even more impressive than the performance was the comfort the Bronco showed on the road. You expect it to be rough and rugged and it’s certainly no Mercedes-Benz S-Class, but next to a Wrangler it is actually a bit quieter and not as harsh over tough roads.

There are six versions of the 2021 Ford Bronco available, Base, Big Bend, Black Diamond, Outer Banks, Badlands, and Wildtrak. We won’t get into everything that makes each different and quite honestly, we feel sorry for dealerships that have to work the order book. Not only are there six versions, but there are two body configurations (2-door and 4-door), and each trim gets a ton of optional equipment that can be added.

Those fender flares give the Bronco a very rugged look and can be removed as needed while the locking differentials are a necessity for anyone planning to do some serious off-roading. The comfort level doesn’t suffer too much from the beefy tires, either.

If you’re thinking that reads like a features list on a luxury sedan, you’re not wrong. The Bronco isn’t just about going off-road, it’s a very advanced SUV from a tech standpoint and when you sit inside, you notice it immediately.

The available 12-inch LCD touchscreen in the centre console is a far cry from the Wrangler’s dated infotainment, and the overall feel is a lot more refined in the Bronco.

As for which version does what best, Ford broke it down for us this way. The Badlands is the most competent off-roader of the bunch with the Wildtrak, although the Wildtrak is more for sand and desert environments. As for the most luxurious and comfortable version, the one for buyers who like the looks but don’t necessarily plan on going off the beaten path, Ford points quickly to the Outer Banks trim. The other three are similar to the Outer Banks, but with varying levels of equipment. 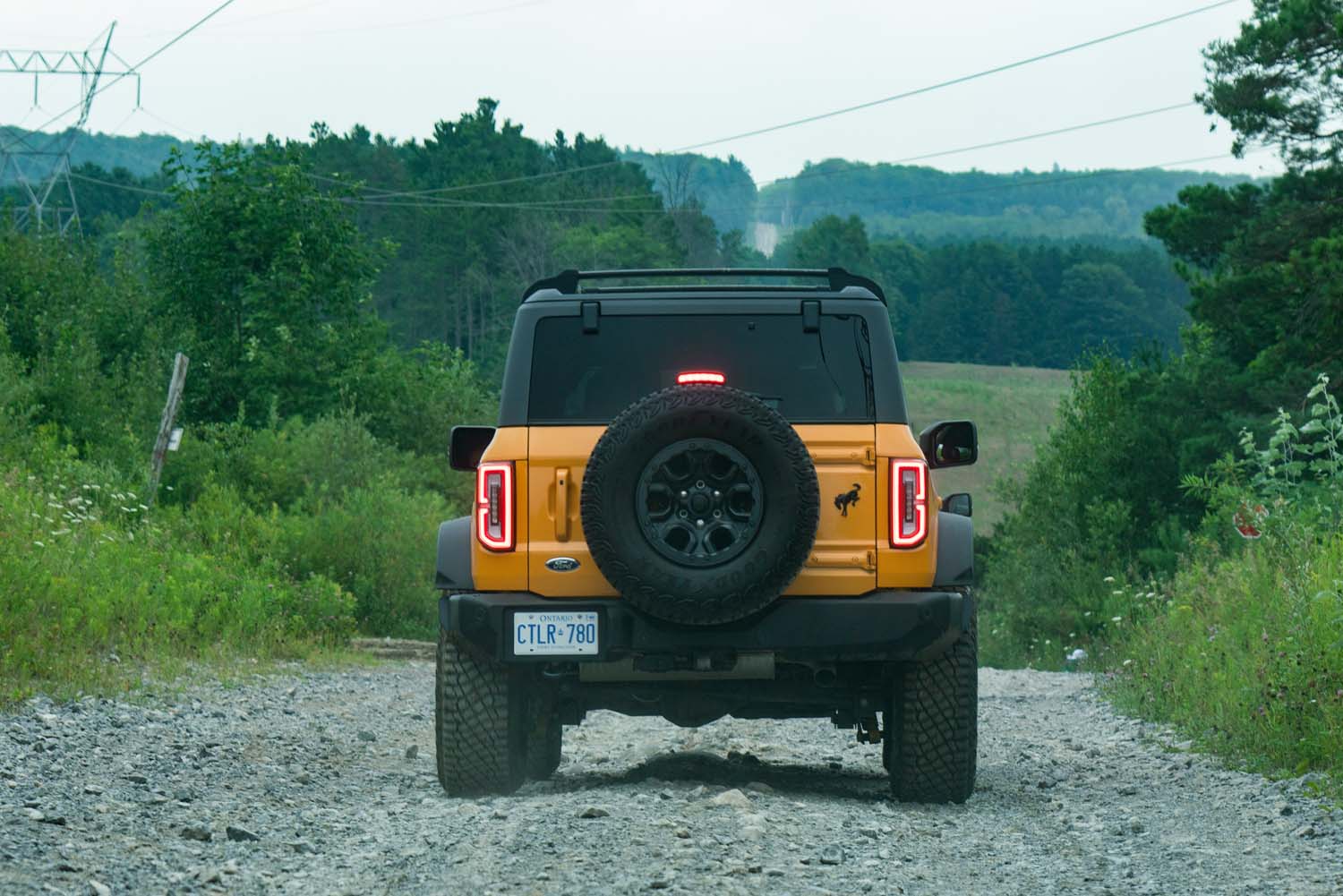 All the Off-Road Tech You Need

We wouldn’t call what we did with the Bronco serious off-roading, but we did climb some steep sand hills that required both differentials to be locked, went over some ruts that had the rear tire sticking out in the air, and navigated some sharp turns in mud. As expected, the 2021 Ford Bronco performed very well.

We put the different drive modes to the test including Mud/Rut, Rock, and Slippery. There are 8 settings Ford calls the G.O.A.T modes (Go Over Any Terrain) including Sand, Sport, Eco, Normal, and Baja plus de modes described above. They aren’t all offered together with Baja being reserved for the Wildtrak trim, for example. 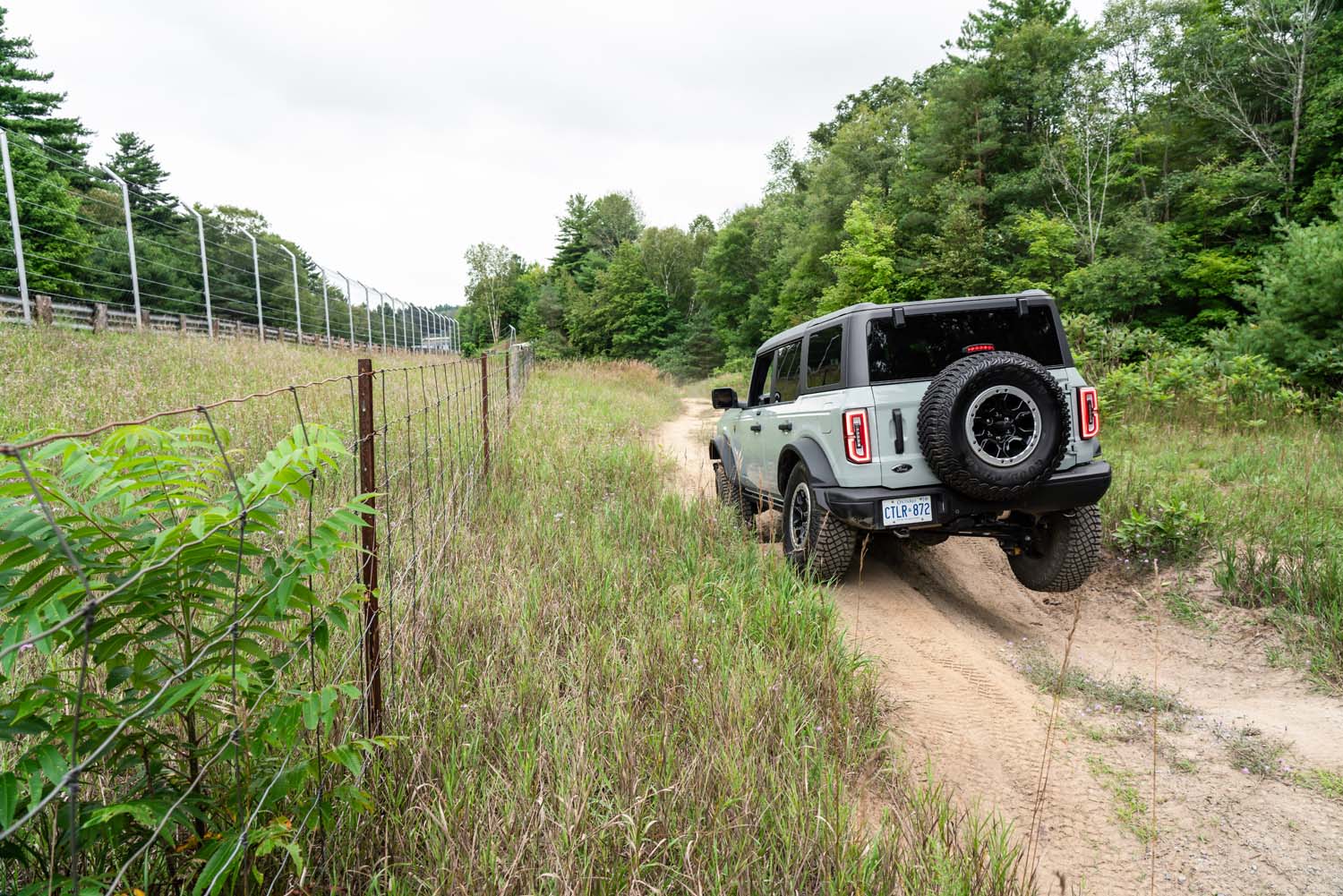 Standard on the Badlands model is a stabilizer bar with disconnect functionality. Going over deep asymmetrical ruts, the disconnect feature really shines as it essentially lets the Bronco “fall” over the terrain, meaning you cross uneven surfaces which much less travel and movement.

Another feature worth noting is the Trail Turn Assist system which applies braking to the rear inside wheel to decrease the turning radius. You press a button, turn the steering wheel all the way to the side you are going, and then slowly navigate whatever sharp turn you need to take. Although more noticeable in the two-door version, the system does indeed shorten the turning radius to almost small hatchback level.

The forward camera also came in handy in the trails, especially given that it was displayed on the 12-inch screen fitted to our test vehicle. Unlike the Wrangler’s camera which is displayed on a much smaller screen that removes a lot of the system’s functionality. 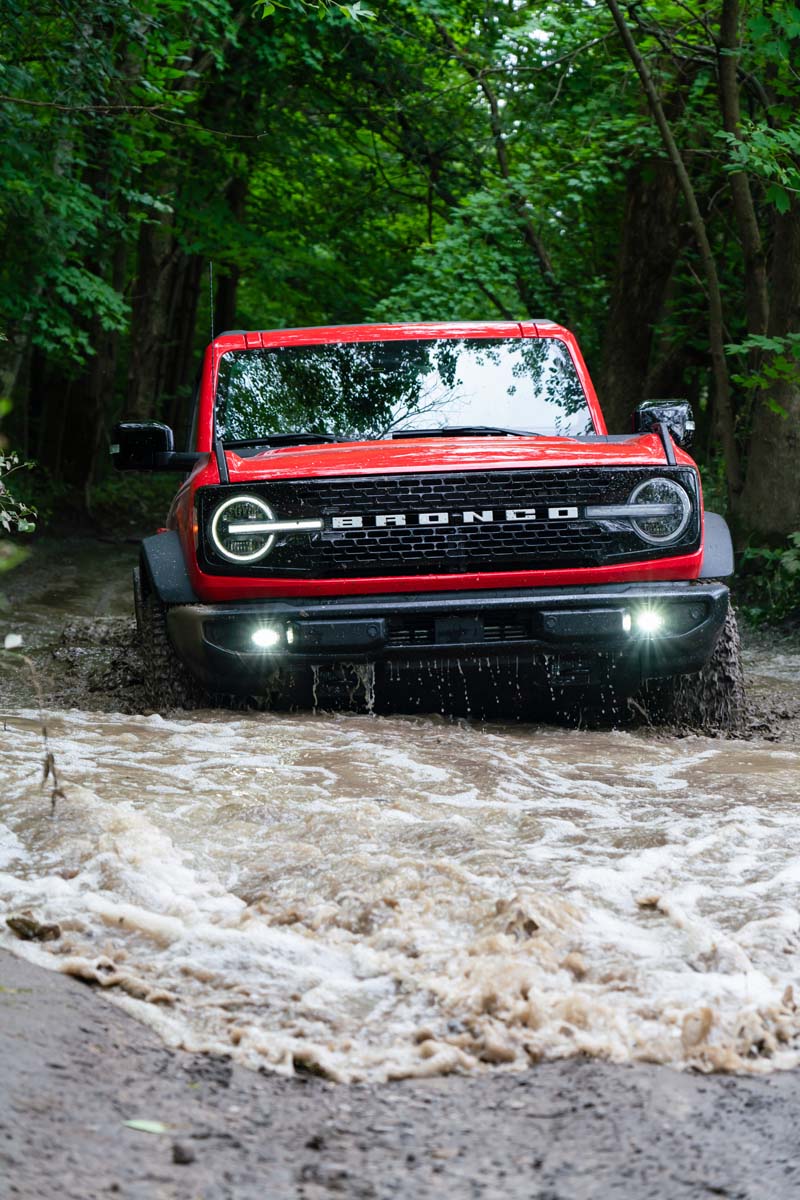 The One Problem with the 2021 Ford Bronco

The major problem with the 2021 Ford Bronco is that it will be nearly impossible to get in the near future if you aren’t one of the over 190,000 buyers who put down a reservation. Even those buyers will have to be patient, so there will definitely be nothing left for buyers who didn’t put their name down.

Point blank, the 2021 Ford Bronco is a remarkable vehicle on its own, and more advanced and modern than the Jeep Wrangler. It’s big and bad and loves going off-road with all the tech needed once there, but it doesn’t force too much compromise on the owner when driving on the road. 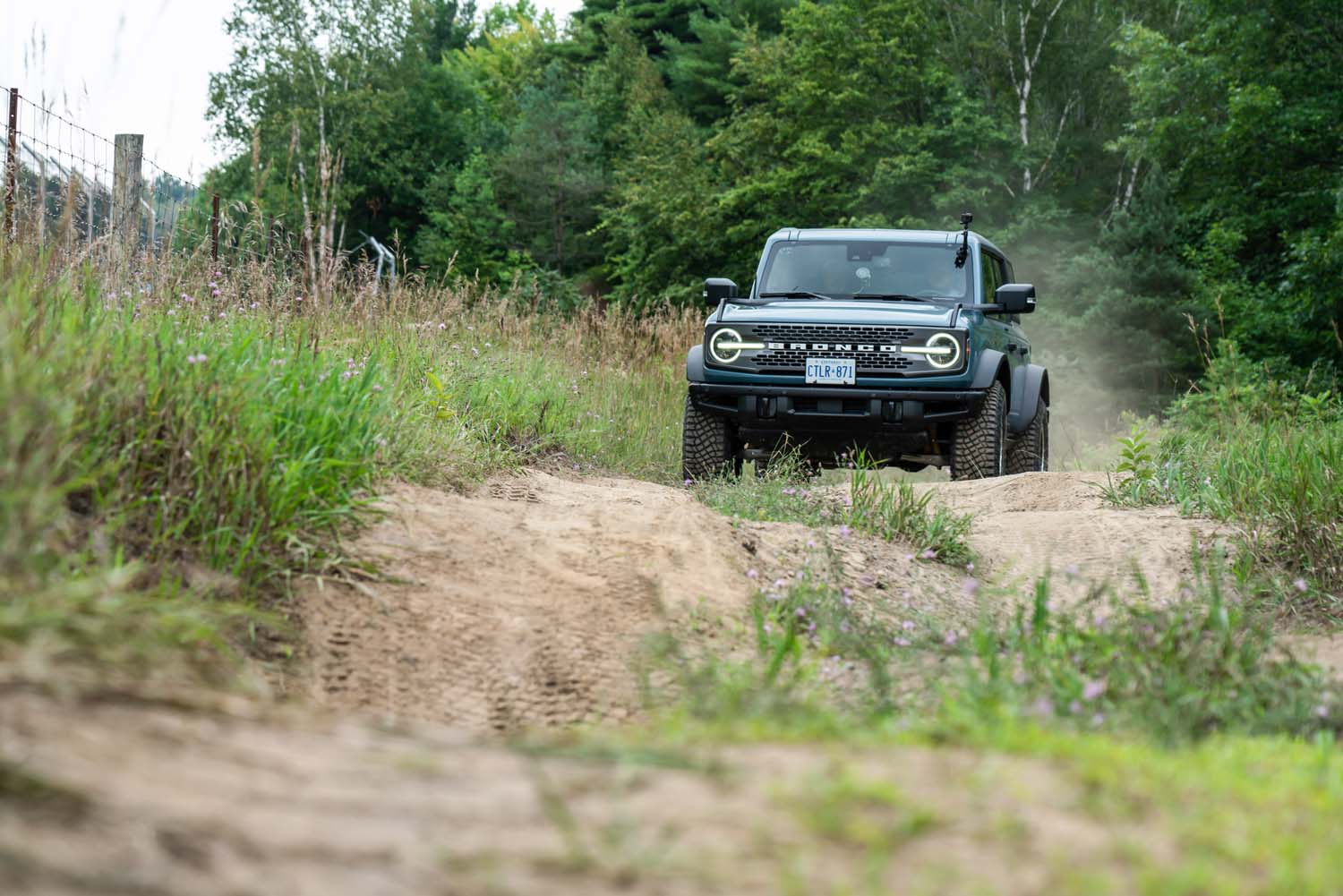 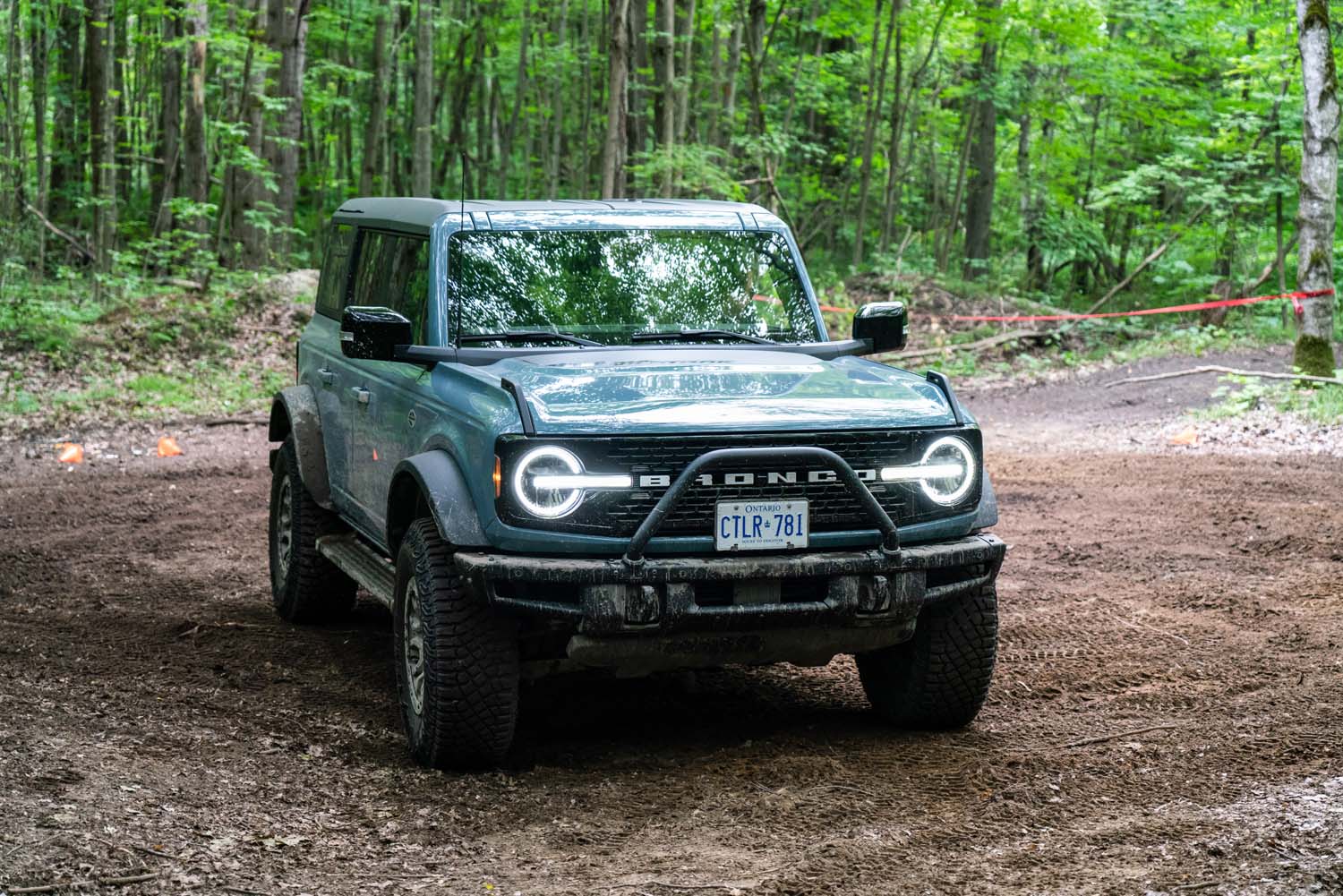 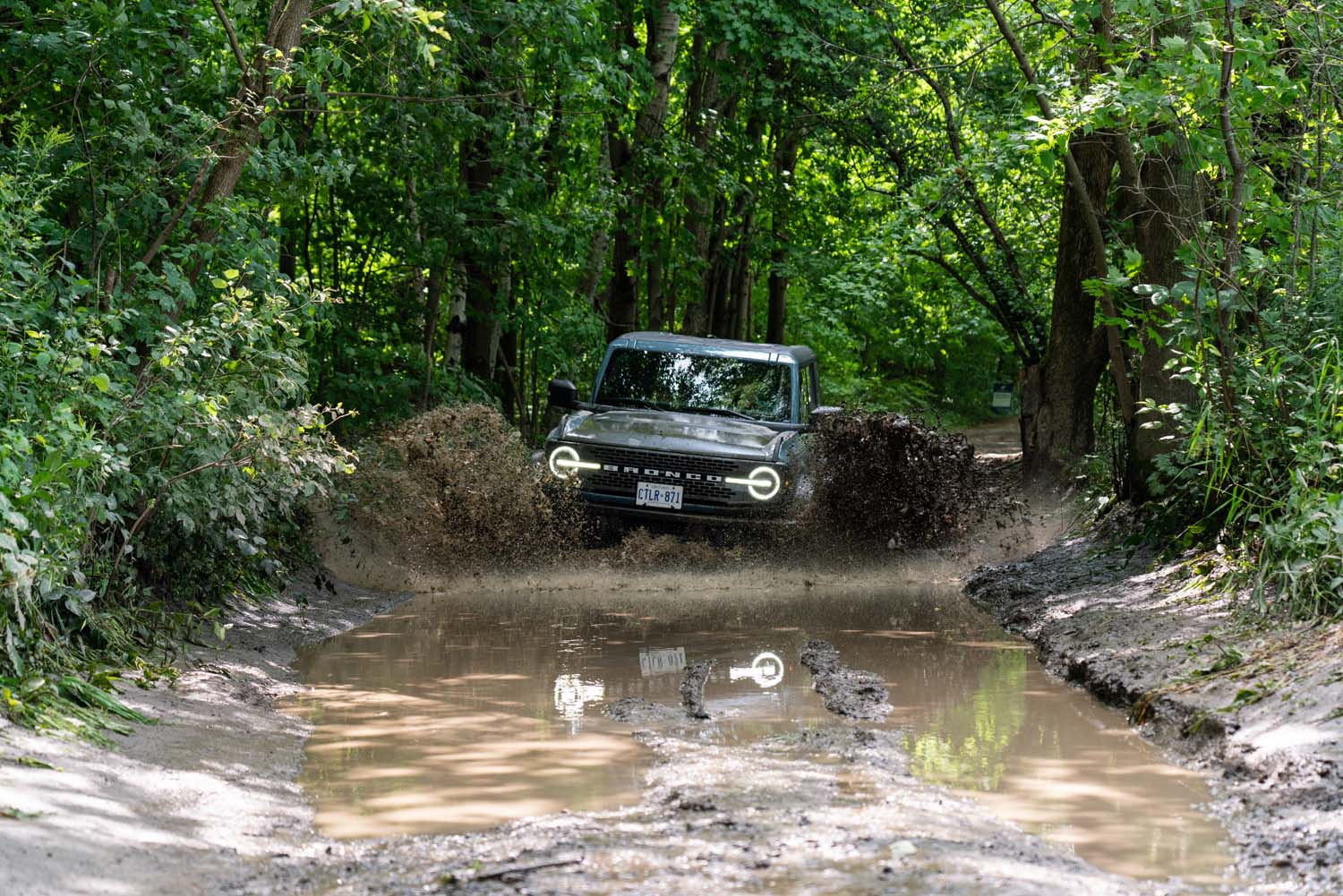 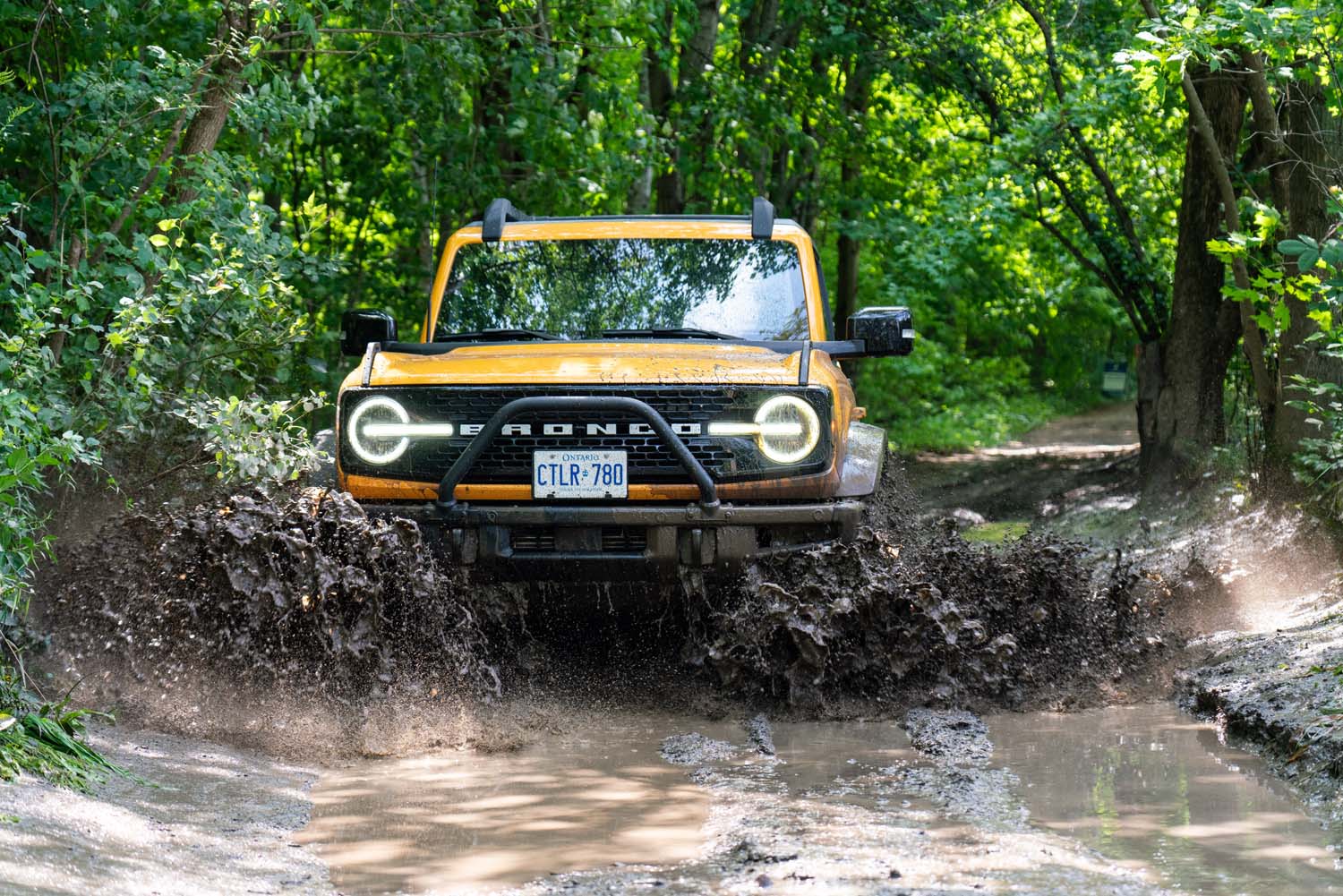 The electric revolution is well and truly underway at General Motors, with the first vehicles based on the new Ultium platform having already found...
Read more

This Urus needs only 3.5 seconds to reach 100km/h from a standstill. The engine tune is borrowed from the Urus Performante. Ultimate super SUV...
Read more

The state is following California’s lead 35% of new vehicles will have to be EVs by 2026 and then 68% by 2030 A...
Read more
Previous article2022 Grand Wagoneer First Drive Review: Massively Good Entry in the Massively Lucrative Full-Size Luxury SUV Segment
Next articleShould You Buy A Demo Vehicle At The Dealership?

Mt. Tremblant, Quebec -- Three years after the 370Z left showrooms, Nissan has gone back to the drawing board and brought us the 2023...
Read more
First Reviews

St. Andrews, NB -- I’ll come right out and say it; when I first saw the Ford Bronco Raptor, it was not what I...
Read more
First Reviews

St. Andrews, NB -- Recently, we attended the Canadian launch of the Ford Bronco Raptor – not far from one of the most mental...
Read more
First Reviews