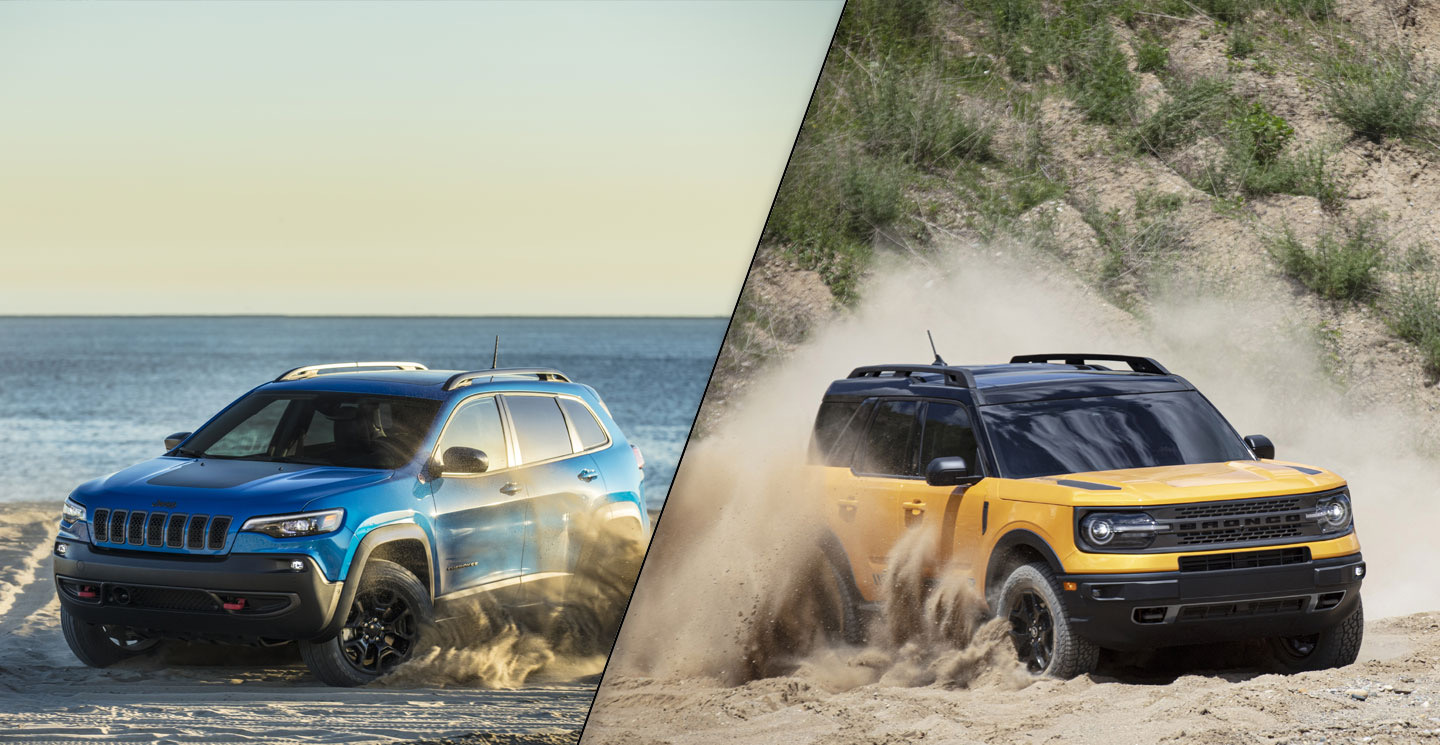 The Jeep Cherokee will realistically and quickly be beaten volume-wise by the Ford Bronco Sport. But does it have what it takes to stay ahead off the beaten path?

The 2021 Ford Bronco Sport will jump into the already crowded compact SUV segment, but it won’t be like all the others. In fact, it will be possible to build it into a very capable off-roader, much like the Jeep Cherokee Trailhawk.

The real question all of us car peeps should be asking ourselves is how big of a success story will the two members of the Ford Bronco family actually be? The “Big Bronco” will have few other direct competitors other than the Jeep Wrangler or a used Toyota FJ Cruiser. The Ford Bronco Sport will find itself in a different situation where it will land in an ocean of compact SUVs as its newest member.

Right away, the fact the it’s a Ford Bronco will set it apart as it’s already a coveted product. Its styling will also differentiate it from the masses as will its features and expected capabilities.

Meanwhile, another Jeep product finds itself as a Bronco’s main target. Immediately, we can tell you that neither the Compass or the Cherokee, or combined for that matter, will manage the Bronco Sport’s potential volume. In fact, this is probably not Ford’s game. The Blue Oval is after the Jeep’s claim of offering the most capable off-roaders in the segment.

Jeep’s Trail Rated badges and Trailhawk trims are the ones under fire. And it won’t, in any way, be a friendly war. So here, we’ll compare the known specs for the 2021 Ford Bronco Sport vs. the 2020 Jeep Cherokee Trailhawk.

The 2021 Ford Bronco Sport should be available before the end of 2020.

US pricing for the 2020 Jeep Cherokee Latitude starts at $25,840. There are 10 available trim for the Cherokee however we’ll concentrate on the two Trailhawk editions. The “base” Trailhawk retails for $34,755 while the Trailhawk Elite is $37,950.

The Canadian Jeep Cherokee has nine trims to select from. The base Sport version starts at $33,240. The Trailhawk goes for $42,540 and the top-line Trailhawk Elite is priced from $45,535.

The current generation Jeep Cherokee has been for sale since the 2014 model year and received a facelift for 2019.

What Are The Available Powertrains?

The first three trims of the 2021 Ford Bronco Sport will be powered by the turbocharged 1.5-litre EcoBoost 3-cylinder engine which will produce 181 horsepower and 190 lb.-ft. of torque. The Badlands will be equipped with the turbocharged 2.0-litre EcoBoost 4-cylinder, good for 245 horsepower and 275 lb.-ft. of torque. All models will feature AWD and an 8-speed automatic transmission as standard.

Which Offers The Most Standout Features?

On the heels of the “big” Bronco, the 2021 Ford Bronco Sport will deliver capabilities that were once limited to Jeep Trailhawk SUVs.

All Bronco Sport will feature AWD as standard. With it will come Ford’s Terrain Management system with its seven driving modes (Normal, Eco, Sport, Slippery, Sand, Mud/Ruts, and Rock Crawl). The last two are only offered in the Badlands model.

The Base and Big Bend editions will deliver 7.8 inches of ground clearance while the Outer Banks adds an extra 0.1 inches. The Badlands (and First Edition) will allow for up to 8.8 inches with options. The latter two will be capable fording into water up to 23.6 inches deep. The others will be limited to 17.7 inches.

The Badlands, with Ford’ Advanced 4×4, will be the direct Trailhawk competitor. It will feature a twin-clutch rear-drive unit including a differential lock that can transfer almost all the engine’s power to the right or left wheel. It will also get a dedicated off-road suspension, Trail Control technology (a low-speed assisted driving system similar to cruise control, but for an off-road trail), bash plates, and up to 29-inch tires.

The Trailhawk package involves a fairly complete list of features to tackle off-roading excursions. The basic elements include Jeep’s Active Drive Lock 4×4 system (with rear locking differential), and with a low-range ratio. As well, look for Selec-Terrain Traction Management System with Rock mode, Selec-Speed Control with Hill Ascent and Hill Descent Control, and a dedicated off-road suspension with 8.7 inches of ground clearance.

Physically, it also gains a few distinct aspects such as a number of skid plates, P245/65R17 OWL All-terrain tires mounted on specific 17-inch painted wheels, and the all-important tow hooks. The Trailhawk Elite adds accessories such as a power liftgate, Nappa leather heated and cooled seats, and more.

Once more, and again in no uncertain terms, Ford killed it. Ford could have been forgiven for easing off design-wise with the Bronco Sport but they wisely did not. From the most basic trim to the Badlands, the Bronco Sport looks special, rugged, and almost premium. The only time the Sport will lose some of its luster will be when they will be as (or more) common than the Toyota RAV4.

This is meant as a compliment: The Ford Bronco Sport could have been the new Land Rover Defender and we would have all believed it. And this does not only apply to the Badlands. Go ahead, build a Base or a Big Bend online, select Kodiak Brown or Alto Blue and convince us that Ford messed up.

The cabin, from the images, is not as premium or sorted as the exterior. We get they were going for a truck-like design but the dashboard’s Escape roots are clearly visible. We’ll wait to see it in person before making an official call.

The Jeep Cherokee is aging relatively well. The facelift, which re-shuffled the front facia into something more conventional was well done. The get the most visually out of the Cherokee, only the off-road inspired packages work. The Upland, North (US only), and both Trailhawk versions with their various trims, wheels, and accents are convincing.

The “luxury” versions such as the Limited and High Altitude look awkward and very un-Jeep-like. The Cherokee’s cabin, like the exterior, is still contemporary. This is a testament to FCA’s forward-thinking interior designers.

The Jeep Cherokee should have run away with the segment, or at the very least, out-sell the Grand Cherokee. The Cherokee, and Renegade and Compass, has under-delivered on its potential which is why Jeep has concentrated on the Wrangler and will soon turn its focus on the Grand Cherokee.

The Ford Bronco Sport may very well become a runaway hit. If anything, it will take what little thunder in left in the Edge and possibly put some hurt on the Escape. The latter, in its recently completely updated form, has underperformed. One of the reasons, in our opinion, could be its bland design.

As we said in the Bronco vs. Wrangler comparison story, the full impact of the return of the Bronco will be measured, volume-wise, with the Sport. The compact SUV could bring volume to Ford’s table.

It’s too soon to make any negative judgment calls on the 2021 Ford Bronco Sport, or nearly. The only “fault” we see on paper is that the EcoBoost 2.0-litre engine will be reserved for the Badlands only. We think that it should (will?) be offered as an option on the Outer Banks and perhaps with the Big Bend. In a tested Ford Escape, the 3-cylinder was noisy, plagued with vibrations although it provided sufficient power.

The Jeep Cherokee soldiers on as a capable SUV however its biggest and most convincing reason for purchasing has now officially been challenged.

Lucid recently hinted at a third model to follow the Air and the Gravity. This will likely be a smaller sedan priced around...
Read more
Previous articleHyundai Santa Cruz Convincingly Rendered In Video
Next articleRolls-Royce Sweptail May Get A Convertible Reboot