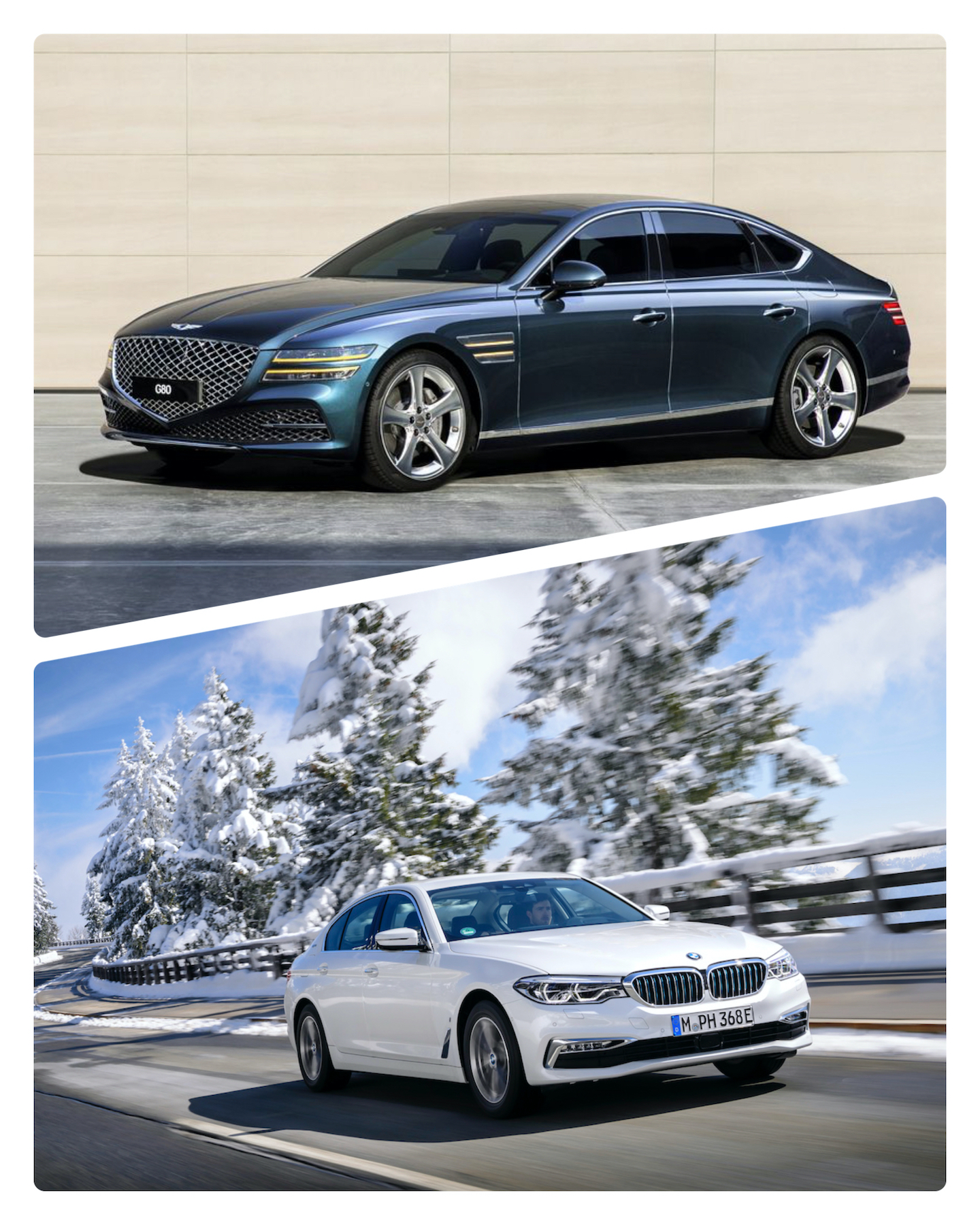 The question is always the same: Can a Korean luxury car company actually compete with an established German brand like BMW?

Even though the world finds itself in a tough spot so far in 2020, Genesis has had an impressive first quarter. Not only have they launched what promises to be a volume leader and flagship GV80 but they’ve followed it up with the striking G80 sedan.

The G80 is the third generation of what started as the Genesis sedan in the late 2000s. The first Genesis was impressive in all respects but the model was unknown, and under-appreciated. The second-generation G80 upped the ante with more of almost everything but failed to captivate in many respects. It did not help that the car started out as a Genesis and when the company was born, it became the G80. The third generation of the G80, for 2021, has far more up its sleeve than any other Genesis sedan.

When it comes to luxury sedans, none are more storied, revered and loved as is the BMW 5 Series – the Mercedes-Benz E Class is the only one on par with the 5 Series. As such, the BMW 5 Series is the ultimate when it comes to status and respect. This BMW is recognized as being the one to combine performance and luxury and performance nearly 40 years ago. Yes, the 5 Series, despite a few Bangle bumps in the road, is the yardstick, the one by which all others are measured. And except the Benz, few can match the Fiver in all measurable respects.

Is the new 2021 Genesis G80 then doomed to be second string to the BMW? Until we get to drive it, the answer on paper is no. We have driven the G70, current G80 and G90 and all of these sedans surprise, even delight.

The 2021 Genesis G80 will likely start at a lower price point. By our estimates, the base 4-cylinder version, with AWD as standard, should retail for roughly $58,000. Pricing in the US will be much lower as AWD is an option – the scenario is the same for BMW. A 6-cylinder G80 AWD will probably match the BMW 530i xDrive’s with a $65,000 starting price.

The new Genesis G80 is planned to hit the road in the second half of 2020. The Coronavirus pandemic may push back the date to later in 2020.

Which Has The More Interesting Powertrains?

There’s another BMW 5 Series and it’s the $68,550 530e xDrive. It starts with the turbocharged 2.0-litre 4-cylinder and includes an integrated AC Synchronous electric motor. Combined system horsepower is 248. All-electric range sits between 25 and 30km.

Genesis has hinted that electrified models are forthcoming however there are no details to share at the moment.

This will be one of the Genesis G80’s main attractions. Right out of the box, it will not only feature a standard 12.3-inch digital display but it will be accompanied by a large 14.5-inch infotainment screen, the biggest one in the segment. We expect to find standard features such as Apple CarPlay and Android Auto, Bluetooth, satellite radio, wireless charging, premium leather-covered heated front (and cooled) and rear seats, power trunk opening, and much, much more.

Final specs have not yet been shared although we can imagine that a complete battery of safety features will also find their way into the mix, and all in the base model.

BMW practices what most other manufacturers do which is charge for numerous options and not individually, in packages. For example, to get front and rear heated seats and a power trunk, the buyer must select the Premium Package Enhanced for an extra $6,850.

The 2020 BMW 5 Series, the G30 generation, is the most attractive 5 Series in nearly two decades. Every line is purposeful, muscular, giving the 5 Series seriously powerful and luxurious looks.

The car grows in, not elegance, visual presence as we climb trims. The best way to spruce up the otherwise extremely attractive sedan is to select the M Performance package which includes 20-inch wheels and more.

The 2021 Genesis G80 is an acquired taste but it will sway most if not all. The giant, once overly-exaggerated Crest Grille is growing on us (looks better than the Lexus spindle grille) and we’ve got nothing else but praise for its parabolic line, that originates at the headlamps and travels to the rear quad taillights. The twin-horizontal marker lights are eye-catching and are right at home on the G80’s flanks.

Both cars are distinctly alluring but the Genesis will without a doubt stand out. The BMW is far more common, likely will be, which has its advantages for many.

In a way, although still a go-to sedan for the BMW brand, the 5 Series has faded in the X3, X4 and X5’s enormous shadow. Although it’s unlikely to ever be discontinued, instead it will probably be reborn as a fully electric sports sedan in the future.

If anything, the 5 Series once helped BMW achieve its then undeniable greatness. It helped forge the 7 Series’ reputation however, of late, BMW is hyper-concentrated on SUVs. Proof of this is that the new X5 and X7 are undoubtedly some of the best offerings in their respective categories.

As for Genesis, the G80 has a very important job. Although the GV80 SUV will likely hog the spotlight, the second vehicle in the line of fire will be the G80. Until the G70 gets a thorough makeover, the G80 is by far the more interesting car in Genesis’ currently still car-heavy lineup.

Genesis is already planning on new SUVs to park alongside the GV80 in showrooms within a year or two. By then, the sedans will have taken a backseat to the “trucks” but until then, the G80 must be as good as looks.

China is the largest market for the Buick brand. This five-seat SUV will reach its first customers at the beginning of 2023. A...
Read more
Previous articleShould You Buy a 2020 MINI Countryman?
Next articleHot Toyota GR Corolla Hatchback On The Way To Take On the Volkswagen GTI