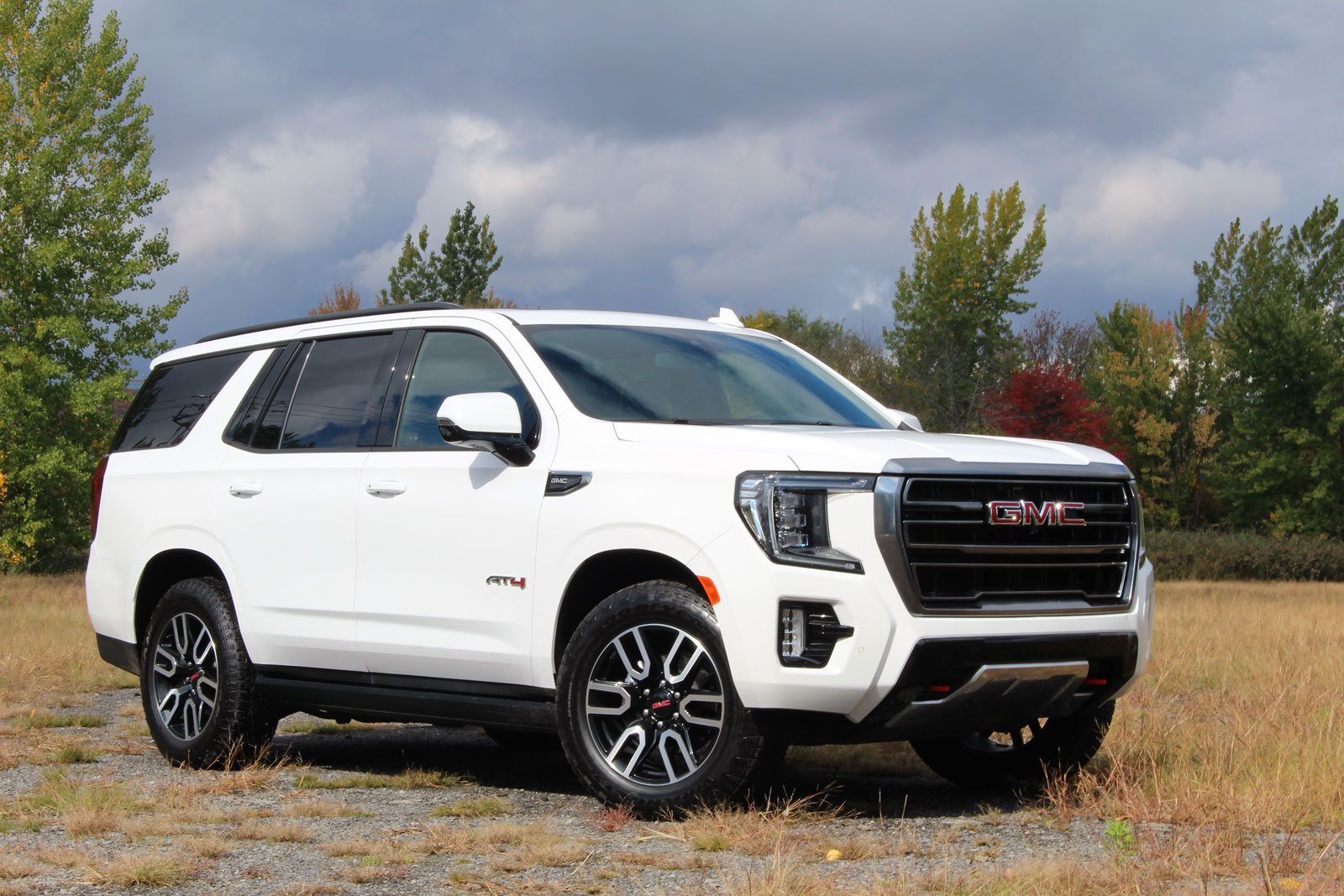 When GM wants to build a brilliant vehicle, it can.

Full-size SUVs may not be the most popular models in Canada, but they sell in significant numbers in the United States. Mammoths like the 2021 GMC Yukon are very practical for hauling the family, towing the boat up to the cottage and heading out on road trips in absolute comfort.

This year, the big SUV receives a thorough redesign, and not only benefits from a more modern platform, but also a new independent rear suspension that improves ride quality and allows for a more spacious cabin in the back. The Yukon is once again offered in regular- and extended-wheelbase variants. 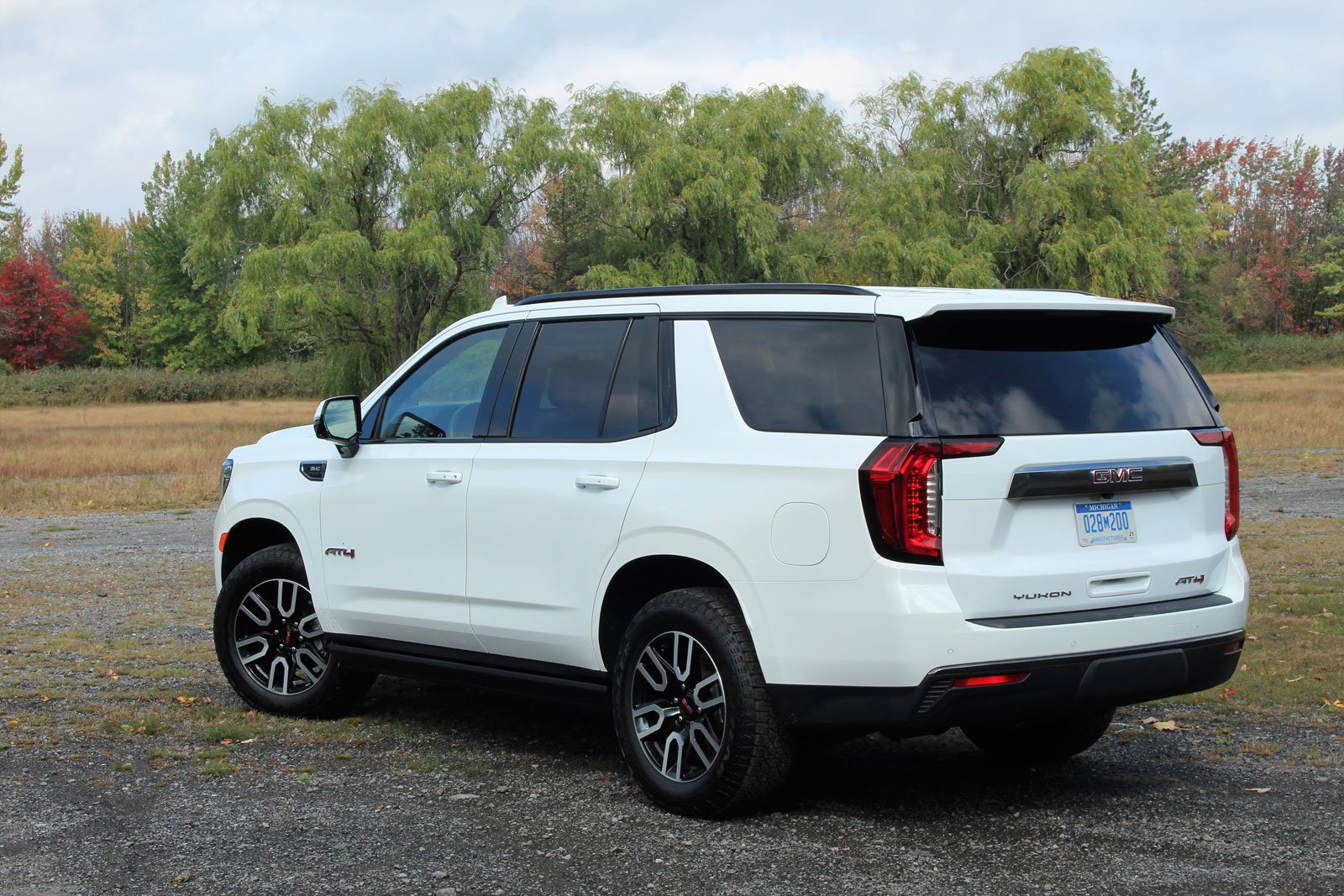 Compared to the outgoing generation, the 2021 GMC Yukon is longer, wider and higher, boasting dimensions now in line with those of its rivals, the Ford Expedition, the Toyota Sequoia and the Nissan Armada, in addition to its acolytes which share the same platform and mechanical components—the Chevrolet Tahoe and the Chevrolet Suburban.

The new interior layout fixes two important shortcomings of the old Yukon. Legroom in the second and third rows has been improved, while cargo capacity behind the rearmost bench in the Yukon climbs from 15.3 to 25.2 cubic feet (433 to 722 litres), up by a stunning 67%. Behind the second row, volume reaches 72.6 cubic feet (2,057 litres), up by 40%, and after folding all rear seats, we obtain 122.9 cubic feet (3,479 litres), up by 30%. As for the Yukon XL, the increases aren’t as significant, but we get up to 144.7 cubic feet (4,097 litres) of cargo space. Class-leading numbers for both configurations. 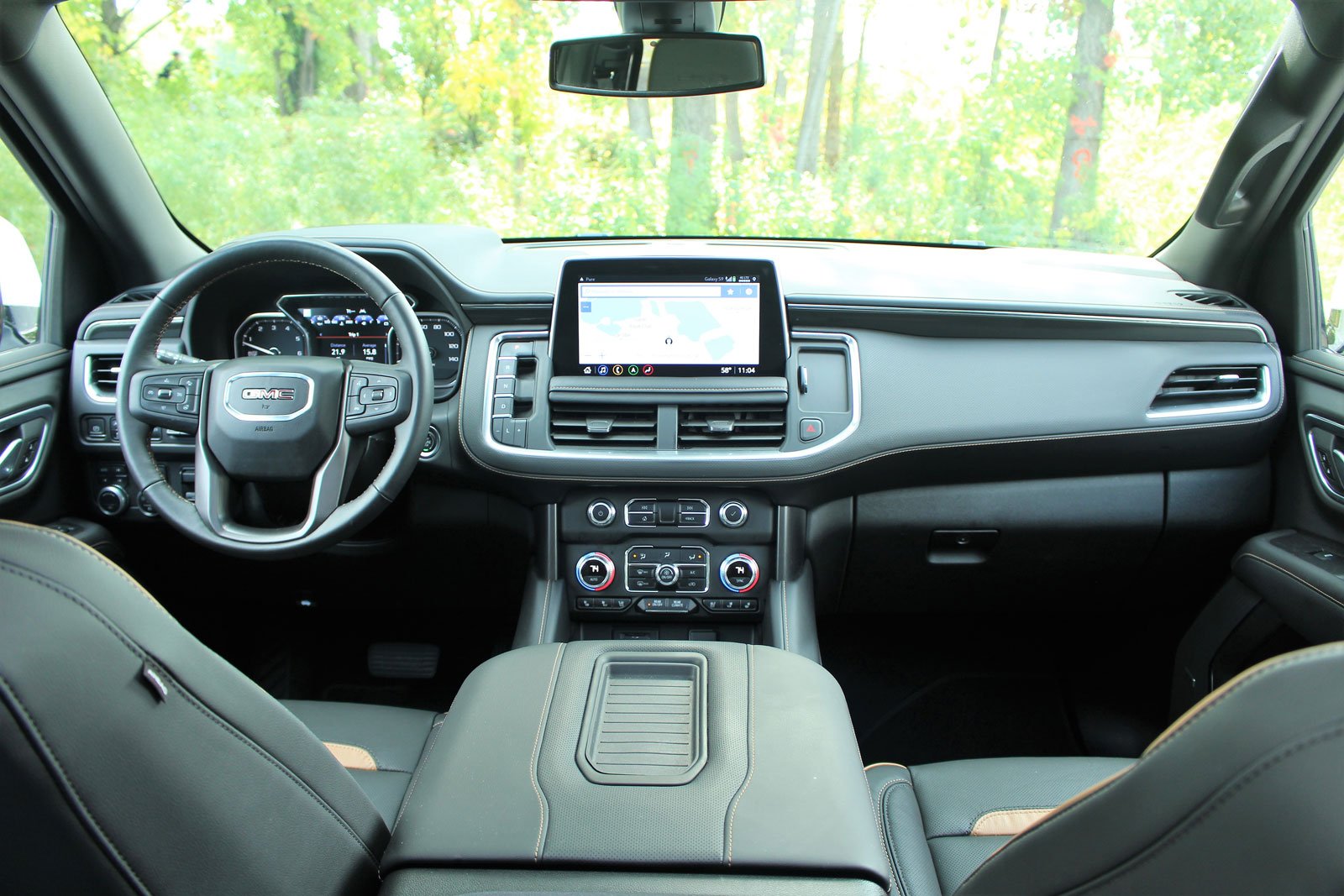 While the 2021 GMC Yukon’s powertrains seem familiar, we benefit from new generations of GM’s engines and a new 10-speed automatic transmission. The 5.3L V8 still produces 355 horsepower and 383 pound-feet of torque, but it features automatic stop/start as well as Dynamic Fuel Management, which can temporarily shut off up to seven cylinders under relaxed driving.

However, the Yukon’s mild weight gain counterbalances these systems’ efficiency, and city/highway/combined fuel economy numbers of 16/20/18 mpg with the 4WD setup (14.8/11.8/13.5 L/100 km in Canada) will trigger nosebleeds for environmentalists. The old Yukon was slightly less efficient around town, slightly more on the open road. With combined averages of 15 and 14 mpg (15.4 and 16.4 L/100 km) respectively, the Armada and Sequoia are even worse, while the Expedition leads the full-size SUV pack with 19 mpg (12.5 L/100 km) thanks to its twin-turbo, 3.5L V6. 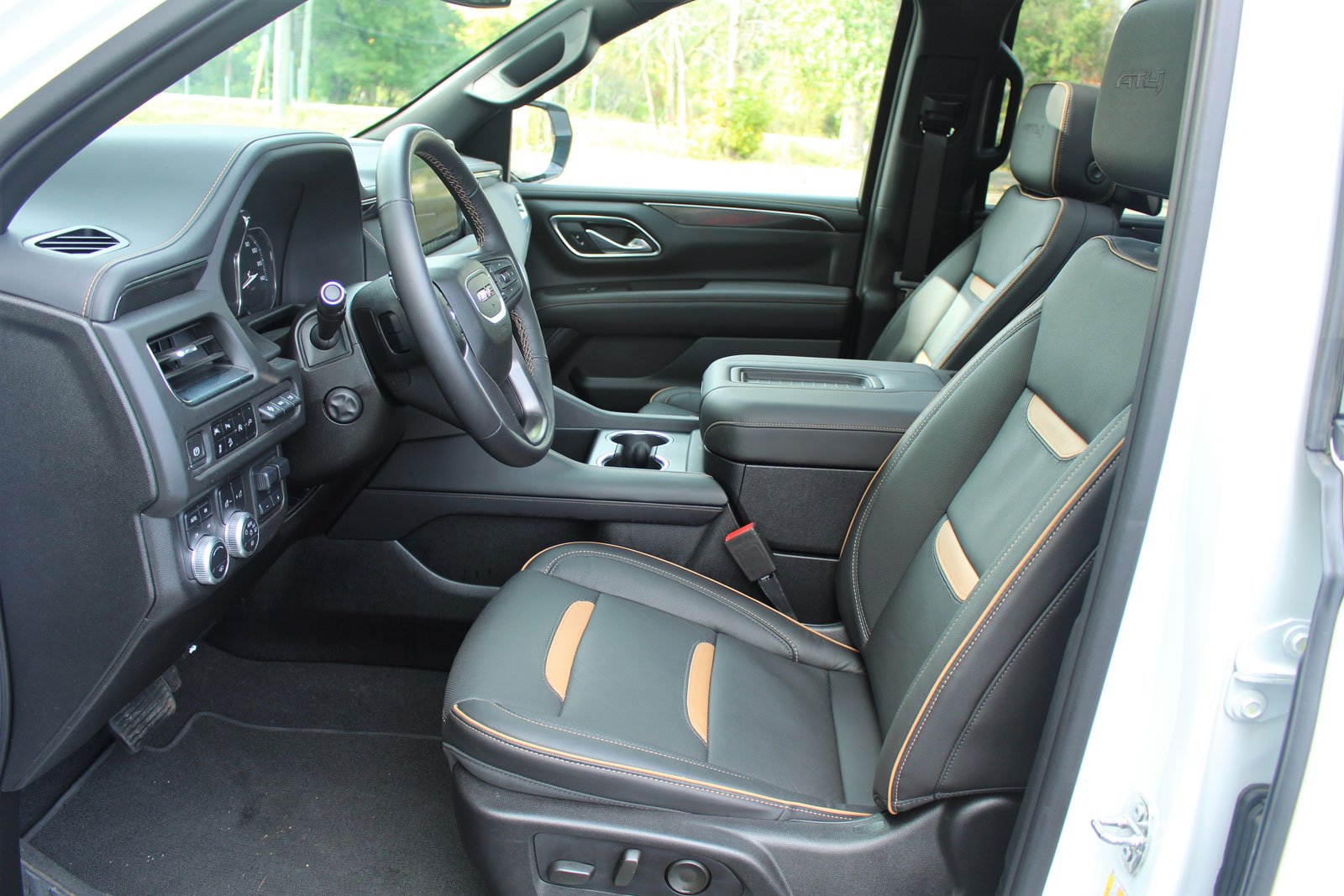 At least we can fill the tank with regular fuel in the Yukon equipped with the 5.3L V8, as the 6.2L V8 found in the Yukon Denali requires super unleaded. We love the added grunt provided by its 420 horsepower and 460 pound-feet, but not only does the higher-octane gasoline cost more, but the combined fuel consumption rating reaches 16 mpg (14.8 L/100 km). A turbo-diesel, 3.0L inline-six comes to the 2021 GMC Yukon’s rescue with 277 horsepower, 460 pound-feet and yet-unannounced fuel economy rating, but we’re expecting about 22 mpg or 10.5 L/100 km. That’s much better.

On the road, the Yukon flaunts much-improved ride quality compared to the outgoing generation, and the AT4 variant we tested—a new “off-road” variant for the 2021 model year—rolled on 20-inch wheels. After driving the 2021 Chevrolet Tahoe equipped with 22-inchers, we can confirm that the 20-inch tires and their higher sidewalls provide a more comfortable ride. 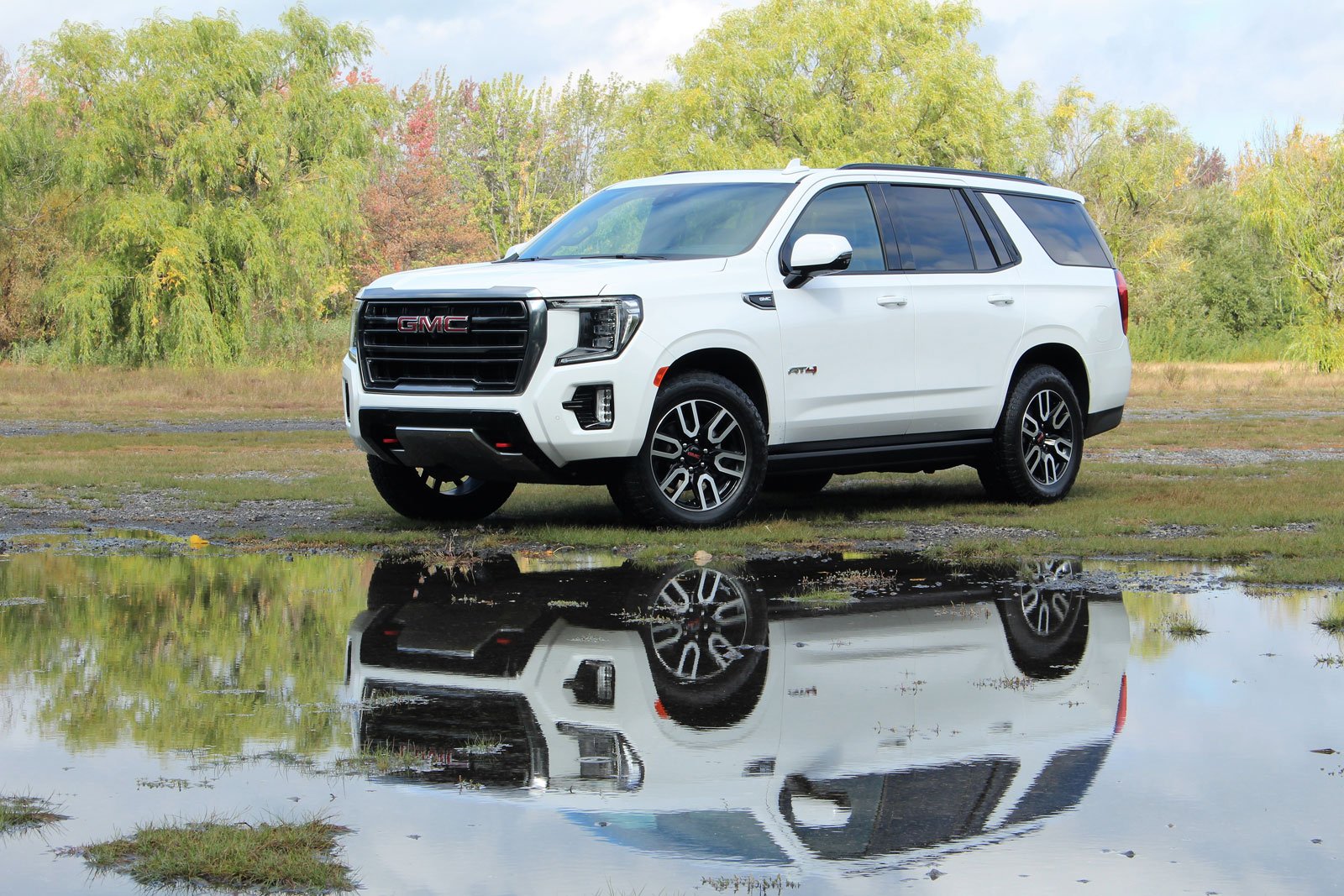 Dynamically, the Yukon with its new suspension handles surprisingly well, even if we should never forget that we’re cruising along in a 5,700-pound (2,600-kg) SUV with a high centre of gravity. Which also helps is the available Adaptive Air Ride suspension, which includes the Magnetic Ride Control dampers. We can lift the truck for a slightly more cushioned ride, while the suspension can kneel down to make entry/exit easier as well. Off the beaten path, with the transfer case set to 4WD Low, we can even raise the ride height by two inches for extra ground clearance.

The AT4 variant gets a slightly more robust appearance, which is the new trend in the utility vehicle world, but ultimately, its off-road capabilities aren’t better than with the other trim levels of the 2021 GMC Yukon. Its unique characteristics are limited to a reshaped front bumper with a skid plate and a near-32-degree approach angle, red two hooks and all-terrain tires. 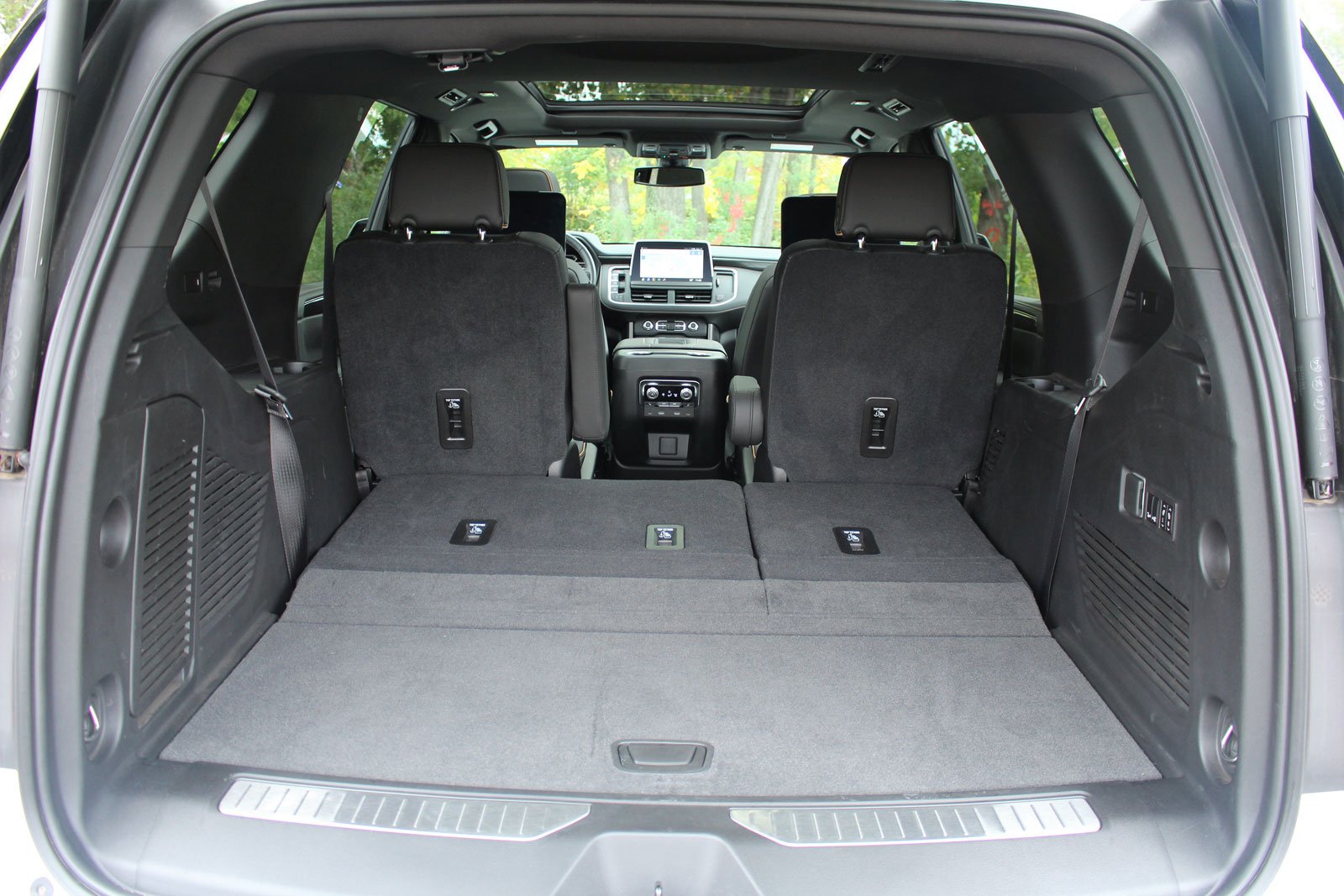 As for the Denali edition, it comes close to the Cadillac Escalade—also redesigned for 2021—in terms of luxury accoutrements, which features a massive chromed grille and other distinctive styling elements. Its cabin is trimmed with premium perforated leather and contrast stitching and exclusive accents, while the infotainment touchscreen is integrated into the centre stack. In all other trim levels, the screen is perched on top of the dashboard.

In Canada, GM expects about 60% of total Yukon sales to consist of the Denali edition, followed by the AT4 at about 25%. The rest will be split between the SLE and SLT trims, although very few units of the base trim should be found on dealer lots. A similar sales split should also be observed in the U.S. Consumers are thus opting for the pricier variants, which are obviously more profitable for the automaker. Nobody will complain about that. 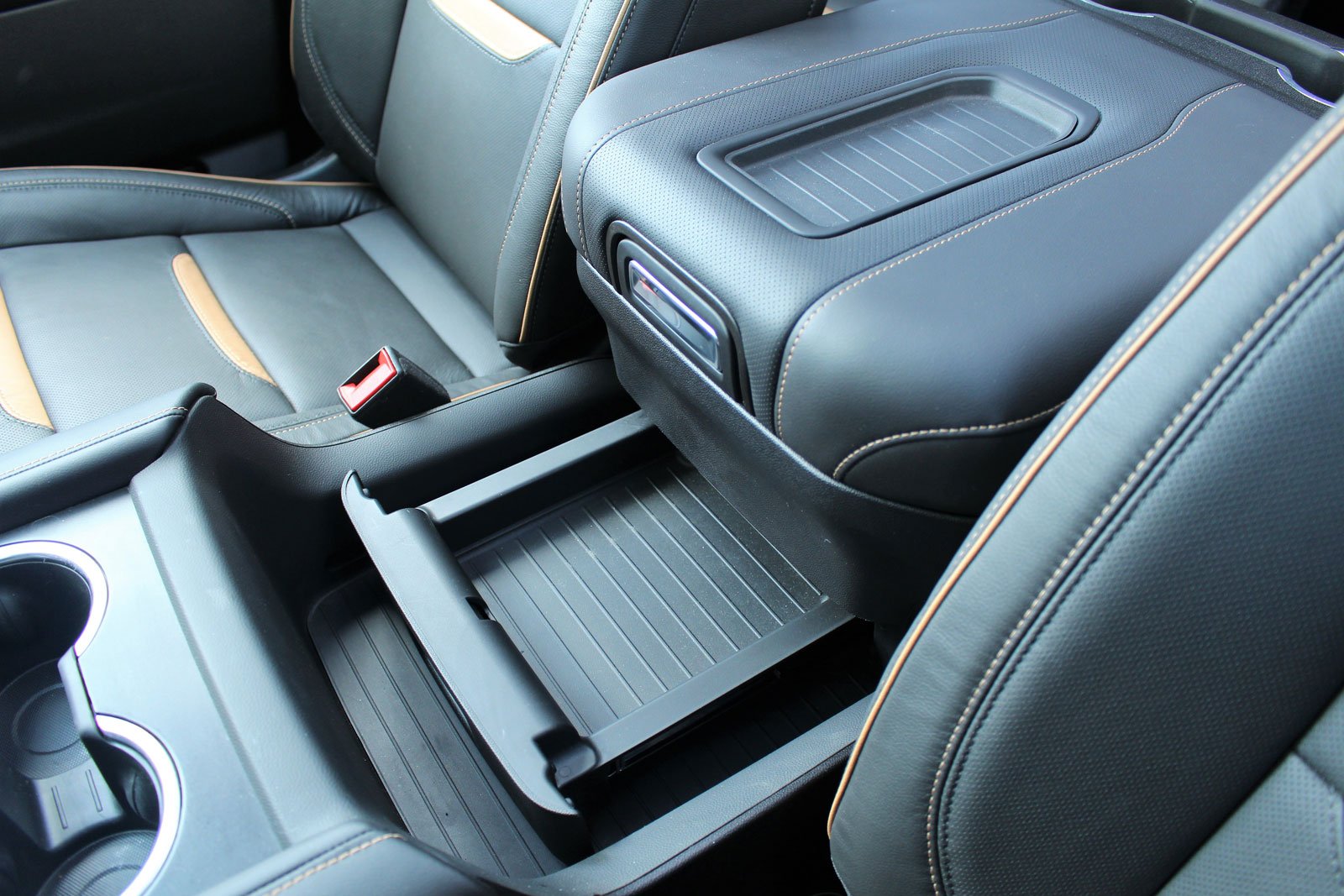 The 2021 GMC Yukon also gets a new pile of technological upgrades as well, with many new advanced safety features, the company’s latest infotainment system with wireless Apple CarPlay and Android Auto integration as well as a dual-screen rear-seat entertainment system, on which we can mirror our cell phone’s display, or we can plug in external devices via the HDMI and USB ports. The kids will be happy to bring their game console and have fun during the road trip—instead of admiring the landscape…

Panoramic power sunroof, power-retractable running boards, power liftgate, heated and ventilated seats up front, heated second-row bucket seats, power-sliding front centre console—there’s no shortage of comfort and convenience gadgets in the 2021 GMC Yukon. By checking all these options on the order sheet, we’ll end up with an SUV costing well over $80K. Ouch. 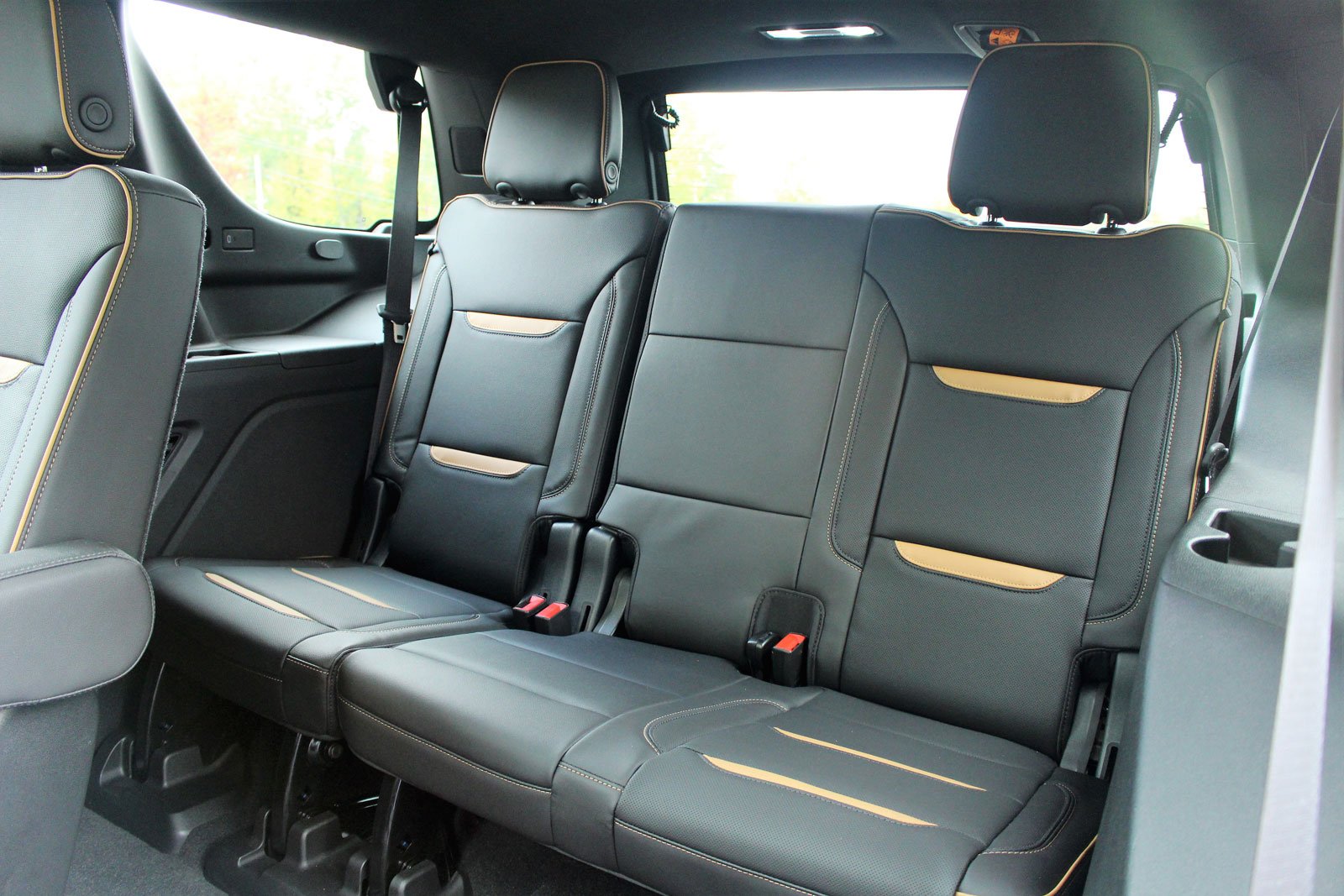 Not is all perfect in the Yukon. Aside from the significant fuel consumption, the front pillars are wide and the mirrors are as big as Mickey Mouse’s ears, so frontward visibility isn’t very good. We must be really careful in busy intersections filled with pedestrians. And while interior space is generous, the truck’s sheer size complicates parking manoeuvres at the shopping mall. Hooray for the 360-degree camera system.

Thanks to all of its improvements, the 2021 GMC Yukon rises to the top of its segment, alongside the Tahoe and the Suburban. While the Expedition is a very competent product—and a more fuel-efficient one—GM’s big SUVs shine with their ride quality, driving characteristics, and interior space.

They will preview future products in August during Speed Week. Over a three-day period, they will make various “muscle” announcements. We’re beginning to seriously...
Read more
Previous articleA $60,000 2020 Dodge Challenger Scat Pack 392 Or A Choice Pre-Owned Car?
Next article2020 Aston Martin Vantage Coupe: The Vantage Is Out To Prove Itself