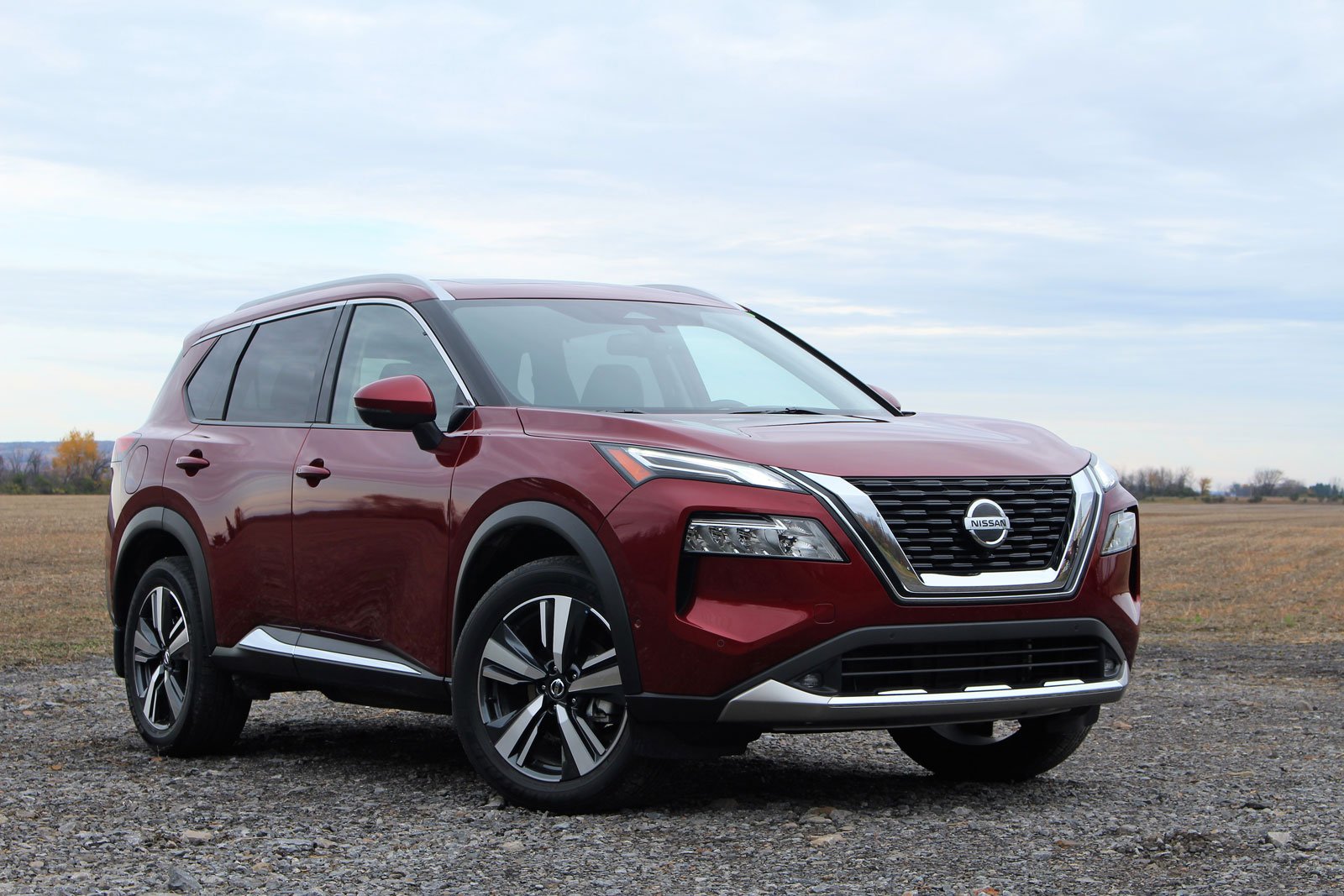 The compact crossover category has taken the market by storm over the past 10 years, becoming an obvious choice for small families on the go and replacing the conventional passenger car in North American driveways. The 2021 Nissan Rogue obtains a thorough redesign to stay competitive.

It’s by far the best-selling model in the brand’s U.S. and Canadian line-ups, no changing the winning recipe is out of the question. And the ingredients of this recipe include a spacious and versatile cabin, a fuel-efficient powertrain as well as good value. The 2021 model year doesn’t change any of that while becoming more modern with new technologies and a sharper design. 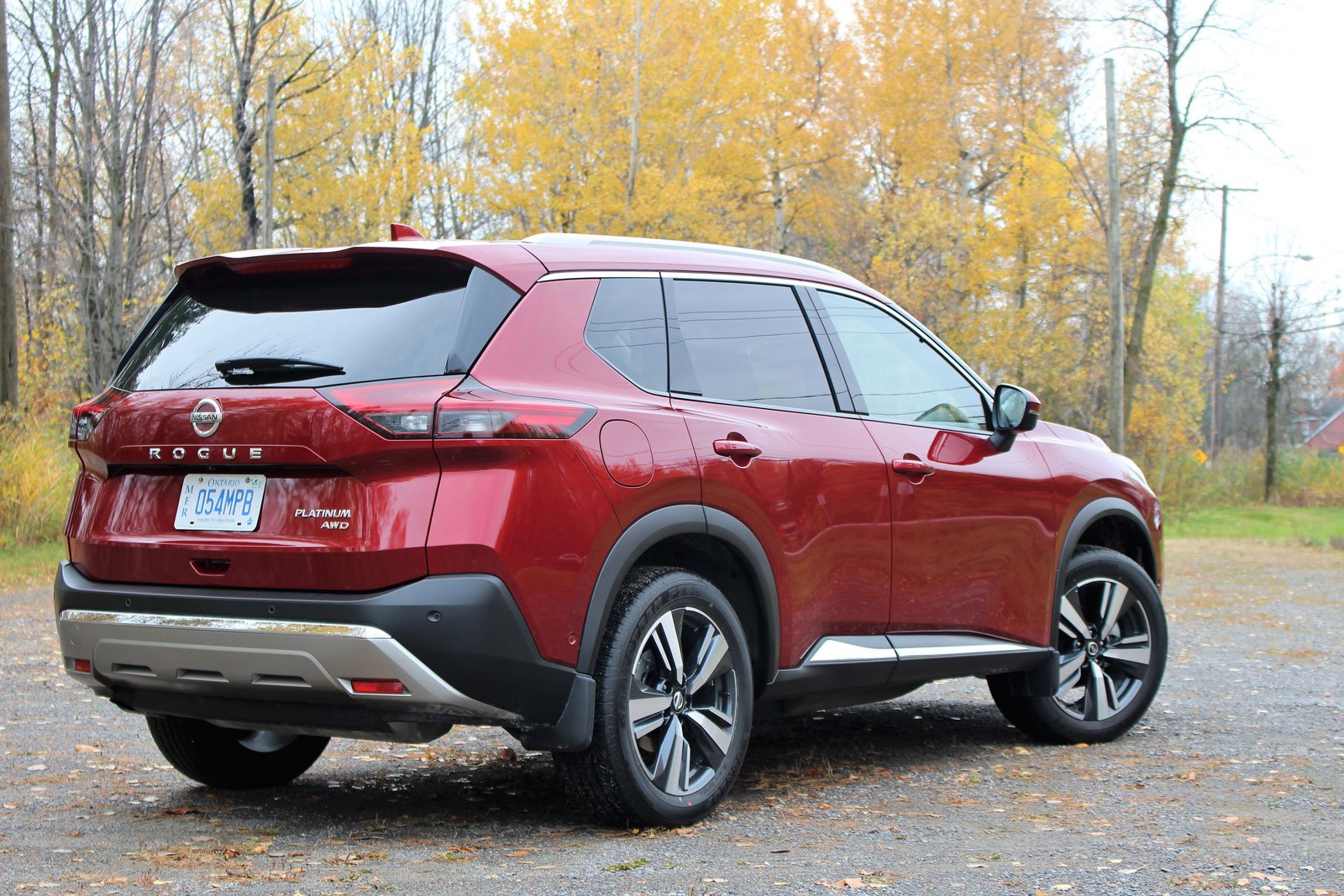 On sale starting in the end of October, the 2021 Nissan Rogue benefits from an all-new exterior design with more angular, more sophisticated and more aerodynamic bodywork that, aside from what Nissan calls its V-Motion grille, shares practically nothing with the outgoing generation. A black-painted roof is also available. With its newfound lines, the Rogue sets itself apart in a segment that includes the Toyota RAV4, the Honda CR-V, the Ford Escape, the Hyundai Tucson, the Mazda CX-5 and the Subaru Forester, among others.

From an exterior dimensions standpoint, the Rogue falls more or less into the category average, but surpasses most rivals for front and rear headroom. Rear-seat legroom is among the worst on paper, but in reality, the almost-flat floor in the middle the elevated front-seat cushions and the reclining rear seatbacks enhance overall comfort. As for the cargo area, its maximum volume is higher than that of all its competitors, save for the CR-V and the Forester.

The automaker also decided to improve the quality and the appearance of the cockpit, with richer materials and a more refined design. At least in the Platinum trim level we tested. The latter is also equipped with a fully digital, 12.3-inch instrument cluster, head-up display and quilted leather upholstery with contrast stitching. There is more storage space than before as well. 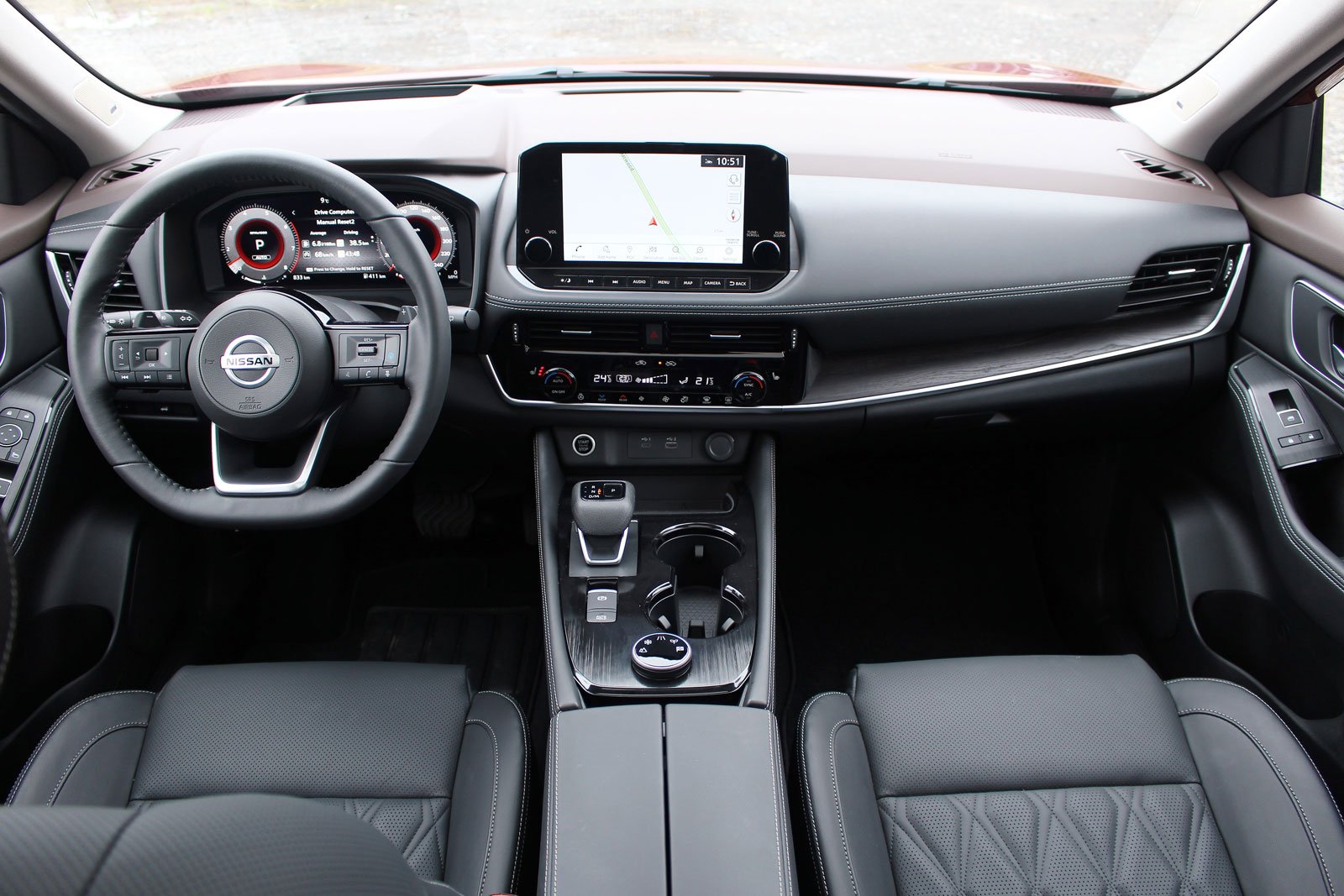 As standard, the 2021 Nissan Rogue features an infotainment system with an eight-inch touchscreen—up one inch from the 2020 Rogue—and Apple CarPlay/Android Auto, while a Bose 10-speaker stereo, a nine-inch touchscreen and wireless phone charging all enhance the Platinum’s appeal.

Under the hood, we still find a 2.5L four-cylinder engine and a continuously variable automatic transmission, but both have been revised. Output is now rated at 181 horsepower and 181 pound-feet of torque, up from 170 ponies and 175 pound-feet in the old Rogue. A rather unspectacular gain, but a welcome increase nonetheless. Of note, fuel economy improved slightly with city/highway/combined figures of 25/32/28 mpg (26/34/29 mpg for the base S trim) for the U.S. market, and 9.2/7.2/8.3 L/100 km in Canada—all including the available all-wheel drivetrain. That makes the Nissan one of the most efficient compact crossovers on the market. During our brief drive mainly focused on highways and country roads, we averaged 31 mpg or 7.6 L/100 km.

AWD is optional on the S, SV, SL and Platinum trim levels in the U.S., while in Canada, it’s available on the S and SV trims, standard in the Platinum. The system favours the front wheels in normal driving conditions, and can send up to 50% of the engine’s power to the rear ones when slippage occurs, at launch and during acceleration bursts. 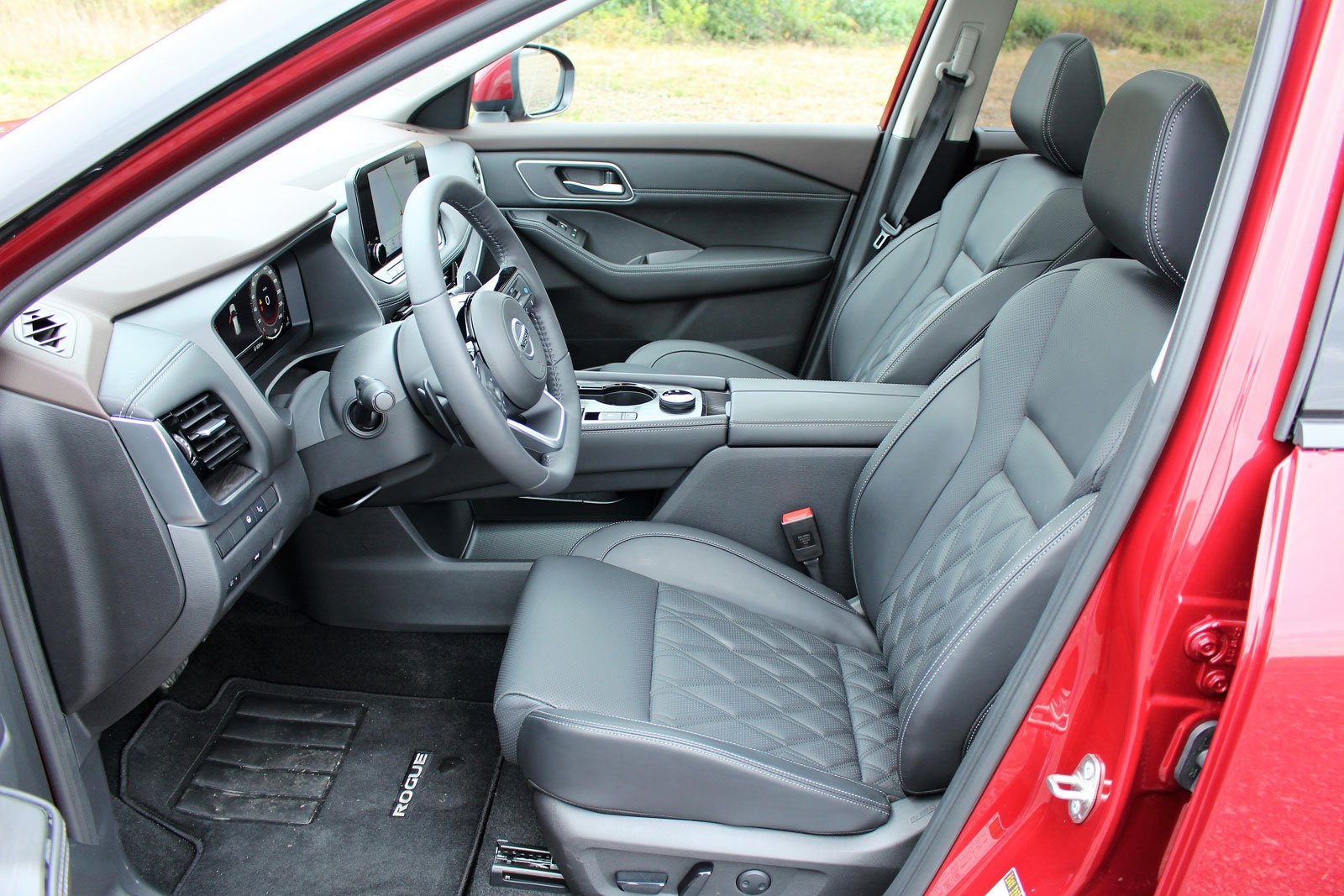 However, for those looking to tow a small trailer or boat, the Rogue’s capacity is limited to 1,350 pounds or 612 kilograms, while the vast majority of compact crossovers can do better. It’s worth pointing out that the previous-gen Rogue’s capacity was 1,100 pounds or 500 kg, so there is an improvement here.

The 2021 Nissan Rogue’s new architecture is stiffer than the old one, thanks to the use of more high-strength steel. By adopting more aluminum body panels as well as other measures, the automaker reduced the vehicle’s weight by a few dozen pounds, despite increasing the equipment list. Suspension and steering have been reworked, providing the Rogue with a remarkably quiet ride, with very little road noise, and a more engaging drive than before. 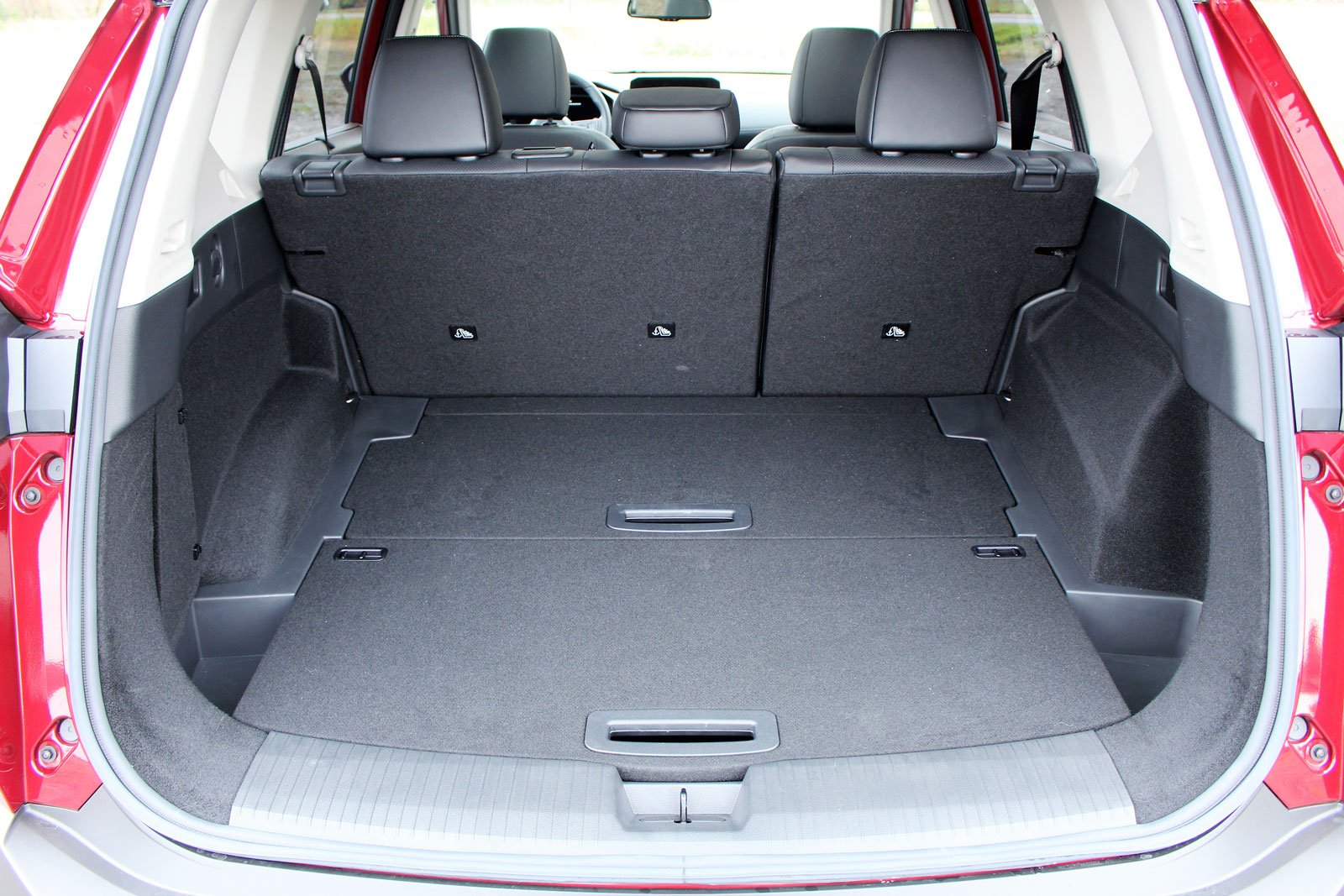 As for the ProPILOT Assist semi-autonomous driving system, which equips all but the base trim level, it works like a charm in traffic, bringing the crossover to a complete stop and getting it moving again, even after being immobilized for up to 30 seconds. The system was also improved to smoothen out braking and reduce lane wandering.

The Rogue still offers good value, as the base S trim retails from $25,650 in the U.S., freight and delivery charges not included. It features LED headlights, 17-inch alloy wheels, cloth upholstery, a height-adjustable driver’s seat and SiriusXM radio compatibility, while the $30K SV with the Premium package adds a heated and leather-wrapped steering wheel, heated front seats, a power-driver’s seat, 18-inch wheels, a panoramic sunroof, a power liftgate, leatherette upholstery and a surround view camera system, among other things. AWD is a $1,400 option. A loaded Platinum AWD costs $36,830 and comes with 19-inch wheels, three-zone climate control, wireless Apple CarPlay (but not Android Auto), navigation, 360-degree park sonar and rear-door sunshades. 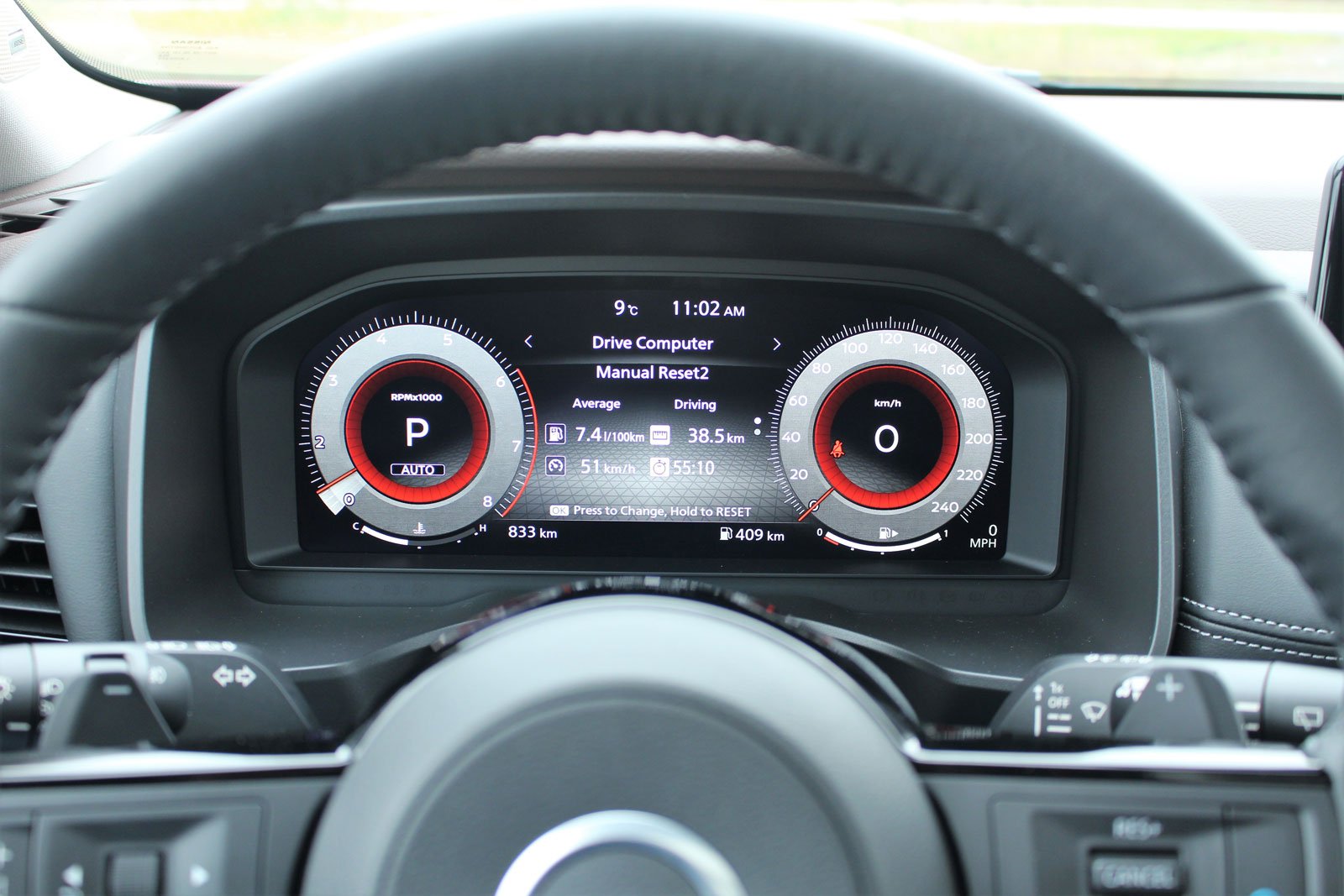 More modern, refined and fun to drive than before, the 2021 Nissan Rogue is much improved over the outgoing generation while remaining affordable. However, aside from the quietness of the cabin, perhaps, it doesn’t redefine anything in the compact crossover segment. The automaker simply caught up with the herd.

On the other hand, the new Rogue is a better crossover where it counts, and should undoubtedly continue to rank among the most popular vehicles in both countries, thanks to its numerous enhancements and bolder design.

With just a few days to go before the opening of the doors of the Goodwood Festival of Speed in England, Ford is getting...
Read more
Previous articleAudi Will Take Control Of Bentley
Next articleReport: FCA/PSA Stellantis Merger to Get Regulatory Approval

New 2023 Toyota BZ4X is first EV from Toyota It shares many of its components with the Subaru Solterra It has 406 kilometres...
Read more
First Reviews

Our first review with the 2022 Infiniti QX60 It is the best-selling model from the Infiniti lineup with 35 % of sales in...
Read more