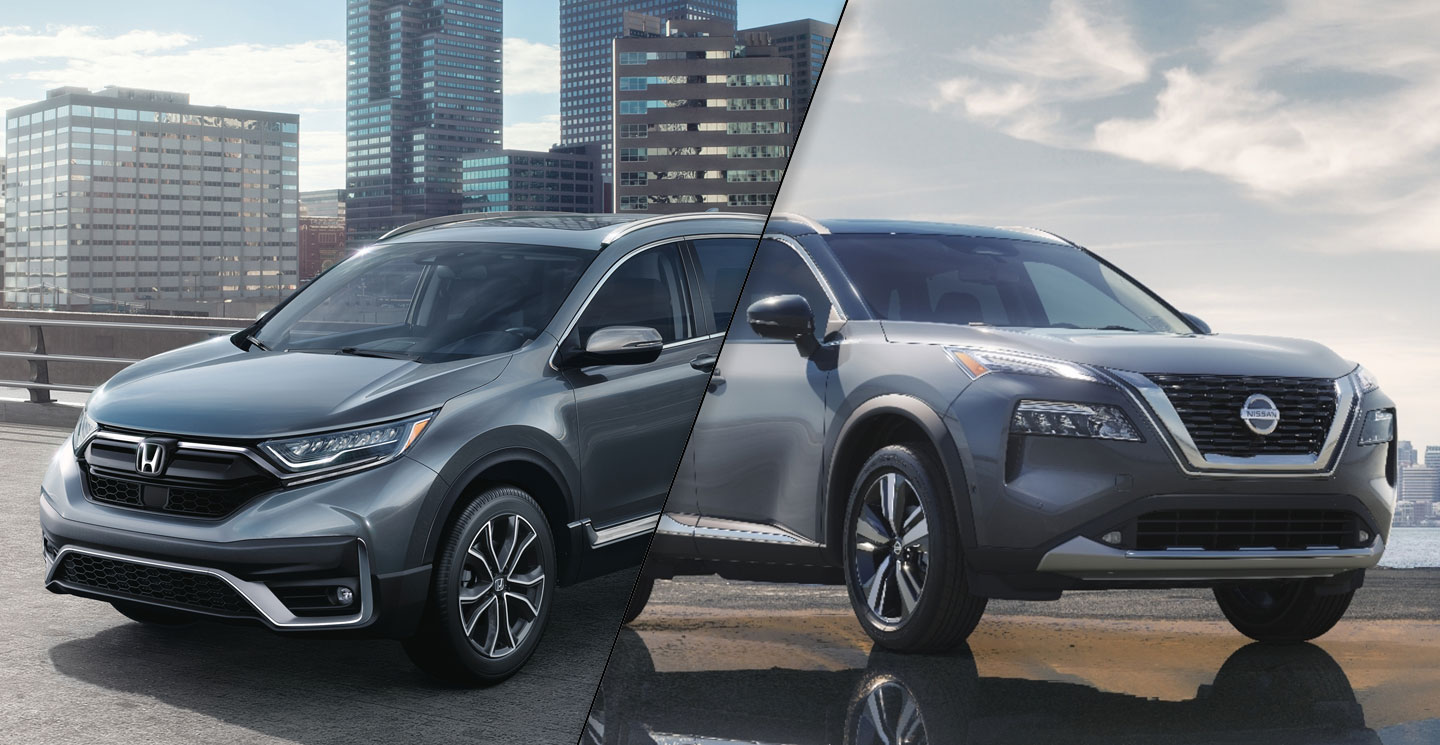 With all this time we’ve had on our hands for the last few months, taking a walk around the neighborhood quickly became a daily activity for millions of Americans and Canadians. If you occasionally think about cars, or are shopping for one, you’ve probably come to notice that, for the most part, compact SUVs are the norm. This is but a hint as to how important and critical this category of vehicles is for all manufacturers. Two of the heaviest hitters, or most common you’ll have spotted on your walks are the Nissan Rogue and the Honda CR-V.

2021 Nissan Rogue Is All-New In Every Possible Way

If you were in Nissan’s shoes, you’d want all the compact SUVs on every street corner to be a Rogue. While it’s been a smash hit for the company for years, Nissan is struggling heavily at the moment but this has not stopped them from updating the Rogue from top to bottom. On-screen, the specifications and the design looks promising indeed but it is you, the buyer, who will have the final word.

As for the Honda CR-V, well, it essentially sells itself. The CR-V has been a to-go SUV in Canada and the US for more than two decades and there are minute signs of a slow-down. Unlike previous generations, the 2020 Honda CR-V has not proven to be a bulletproof as the previous ones, and it also has another problem: The Toyota RAV4.

In fact, all participants in this segment including the Chevrolet Equinox, Subaru Forester, Mazda CX-5, Kia Sportage, Hyundai Tucson, Jeep Cherokee, Ford Escape, and a few others, all have the same issue in the Toyota RAV4 – it seems unstoppable. 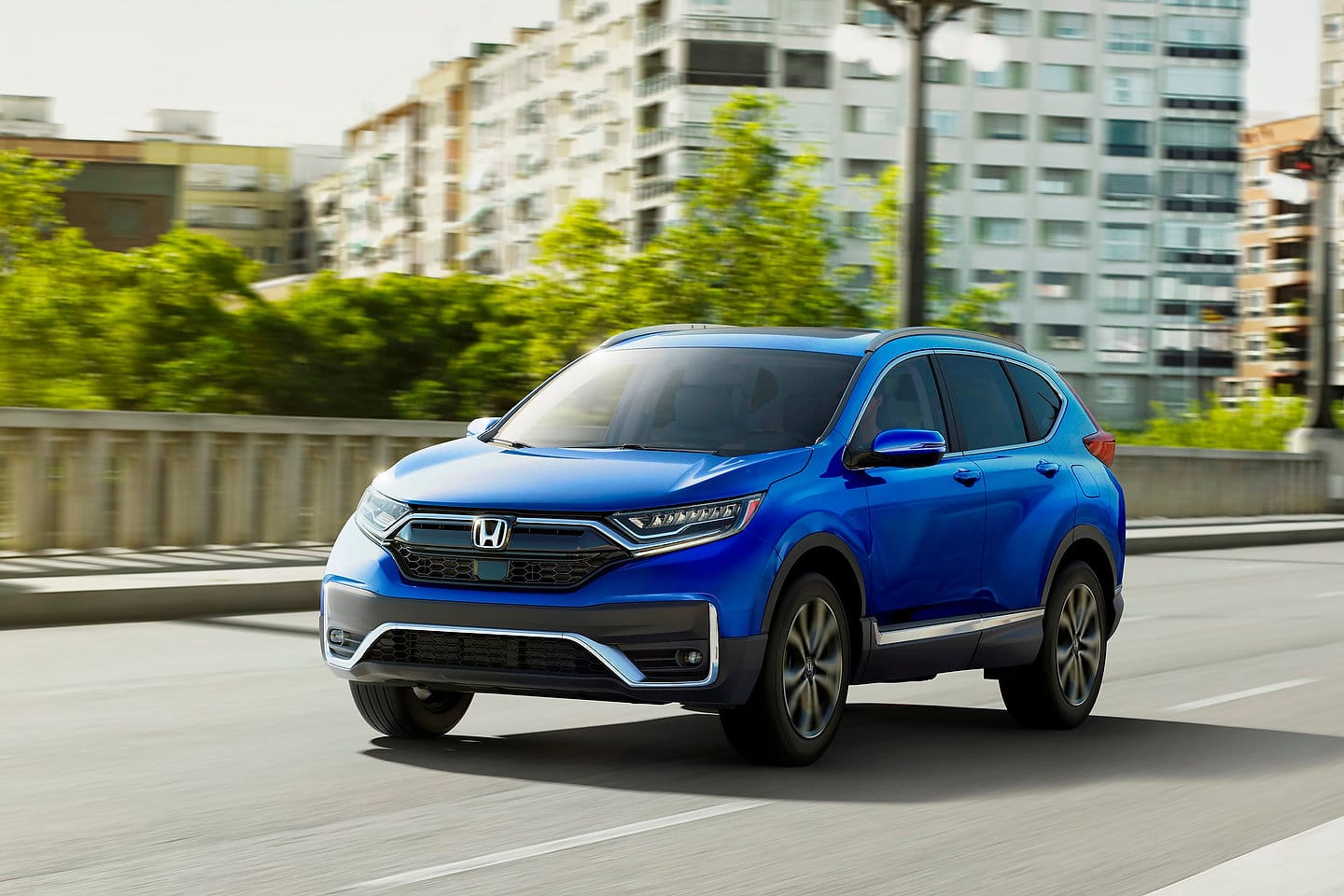 The all-new 2021 Nissan Rogue is set to arrive in showrooms sometime this fall. For the moment, pricing is unknown however it will be shared closer to launch. We’re speculating that, in Canada, the base S with FWD will be priced at around $28,000. The SV AWD should command a $4,000 premium while the top-line Platinum should hover near the $39,000-40,000 mark.

US pricing should look something like the following: Around $26,000 for the base S trim. The SV and SL will grades return and retail for roughly $27,500 and $32,500 respectively. A new Platinum trim comes into play with the 2021 model year and should be priced near the $35,000 mark. AWD will be an option across the board and should cost about $1,400.

Both Nissan and Honda prefer simplicity over numerous options when it comes to powertrain selections.

Nissan leaves only one powertrain on the table for all versions. The 2021 Rogue will be delivered with a standard 2.5-litre 4-cylinder engine that now produces 181 horsepower and 181 lb.-ft. of torque, an increase of 11 and 6 respectively. Interestingly, nowhere in the press releases is there mention of the Rogue’s transmission, which will of the continuously variable type. In the US, AWD will optional on all trims while in Canada, we expect it will be an option on the base “S” trim and should be standard on the other two.

Up until recently, Honda also stuck its guns with a single powertrain option. The turbocharged 1.5-litre 4-cylinder engine is good for 190 horsepower and 184 lb.-ft. of torque which is also coupled to a continuously variable automatic transmission. In Canada, AWD is standard on all trims save for the base LX-2WD. In the US, it is an option on all trims.

The CR-V hybrid features a 2.0-liter Atkinson cycle engine with an electric motor and an eCVT continuously variable transmission. The total system output is rated at 212  horsepower.

Fuel economy numbers for the updated 2.5-litre in Rogue are not yet known but we expect the combined average to hover around the 9L/100 km. The Honda CRV LX AWD is rated at a combined 8.1L/100km or29 mpg. The Hybrid is extremely efficient returning a combined average of 38 mpg.

In the US and Canada, the EX-L is loaded with a power tailgate, leather-covered heated front seats (rear heated in Canada), 18-inch wheels, a heated steering wheel (EX-L Hybrid only in the US), and more.

The most basic 2021 Nissan Rogue trim will include a number of similar elements in Canada. Nissan intends to play the value card with features that are limited to much higher trims. Rear heated seats for example come with the Rogue SV, the middle trim, compared to the EX-L for the CR-V. On top of this, the Rogue will be available with a 10.8-inch head-up display, a 12.3-inch digital cluster, a central display sized up to 9 inches, wireless charging, and wireless Apple CarPlay integration. Many of these accessories are not offered with the Honda, or typically reserved for more expensive vehicles.

We have to admit that our first impressions of the new 2021 Nissan Rogue are mixed. The trendy split front lights looked odd on the Juke and rarely work aesthetically on some of the Korean vehicles that resort to this design. Ultimately, it is the new Rogue’s most defining visual, that and its elegant posher lines. It happens to be 1.5 inches shorter and 0.2 inches lower than the outgoing Rogue. Nissan boats that the rear doors now open a full 85 degrees, exactly like the Honda CR-V. It is a blessing for all parents.

There’s no doubt that the new Rogue looks far more upscale than its previous generations. It is important to remember that the vehicle used to create the media galleries is almost exclusively the top-line Platinum. And, if the interior pictures are enticing, read the previous sentence. It does look roomy, though.

The Honda CR-V is, much like the Subaru Forester, what a Japanese compact SUV should look like. It’s by no means unattractive, but with the possible exception of the rear taillight treatment, it seems a little generic. The Sport trim (Canada only) attempts to spruce it up with dark 19-inch wheels, dual chrome exhaust tips, LED fog lights, and roof rails.

The CR-V’s cabin is typically Honda with decent and relatively straightforward ergonomics. There’s always plenty of room for five occupants, and fit and finish are Honda quality.

There are no two ways to put it: If the 2021 Nissan Rogue fails to match, and ideally surpass, current sales volumes in both Canada and the US, we wonder about the brand’s future in North America. Although Nissan offers products in most major segments, sales have plunged and dramatically in some instances. The new Sentra, Altima, Murano, Kicks, Rogue Sport (Qashqai in Canada), Pathfinder and  Titan are nearly all under-performing (some severely like the Altima). Basically, the 2021 Nissan Rogue has to be a smash hit.

At Honda, much like Toyota, the burden of carrying the company’s fortunes lands on many nameplates such as the Civic, Accord, and the Pilot.

The Canadian and American new car markets have stumbled slightly over the last two years but not all manufacturers are suffering as much as Nissan. Let’s keep in mind that 2020 is not a typical year, period.

We look forward to sampling the new 2021 Rogue. What specifications Nissan has shared as well as all the improvements have increased our expectations over the outgoing vehicle. Despite this, however, we’re not certain it will take the segment by storm.

Sales have dropped considerably in the US, and mildly in Canada, in 2019. During the same period, Honda CR-V and Toyota RAV4 deliveries increased – this is not the result of a trend, or by accident. If we take the current Nissan Altima, it suffered poor sales despite being all-new and introduced almost two years ago.

The bottom line and what needs to be kept in mind is that the new 2021 Nissan Rogue looks to be superior to the old model which continues to be popular overall.

No matter what, the Honda CR-V and the segment boss, the Toyota RAV4, have garnered momentum in a downward market. This is extremely telling.

It features two new hybrid powertrains. The CX-90 is not only the most powerful Mazda ever but the most luxurious. Mazda Canada has just...
Read more
Previous article2022 Nissan 400Z, Volvo 240, 2021 Lexus IS F: The Best Renderings Of The Week
Next articleMustang Mach 1, 2021 Toyota Supra, 2021 Nissan Rogue: Top 10 Stories Of The Week