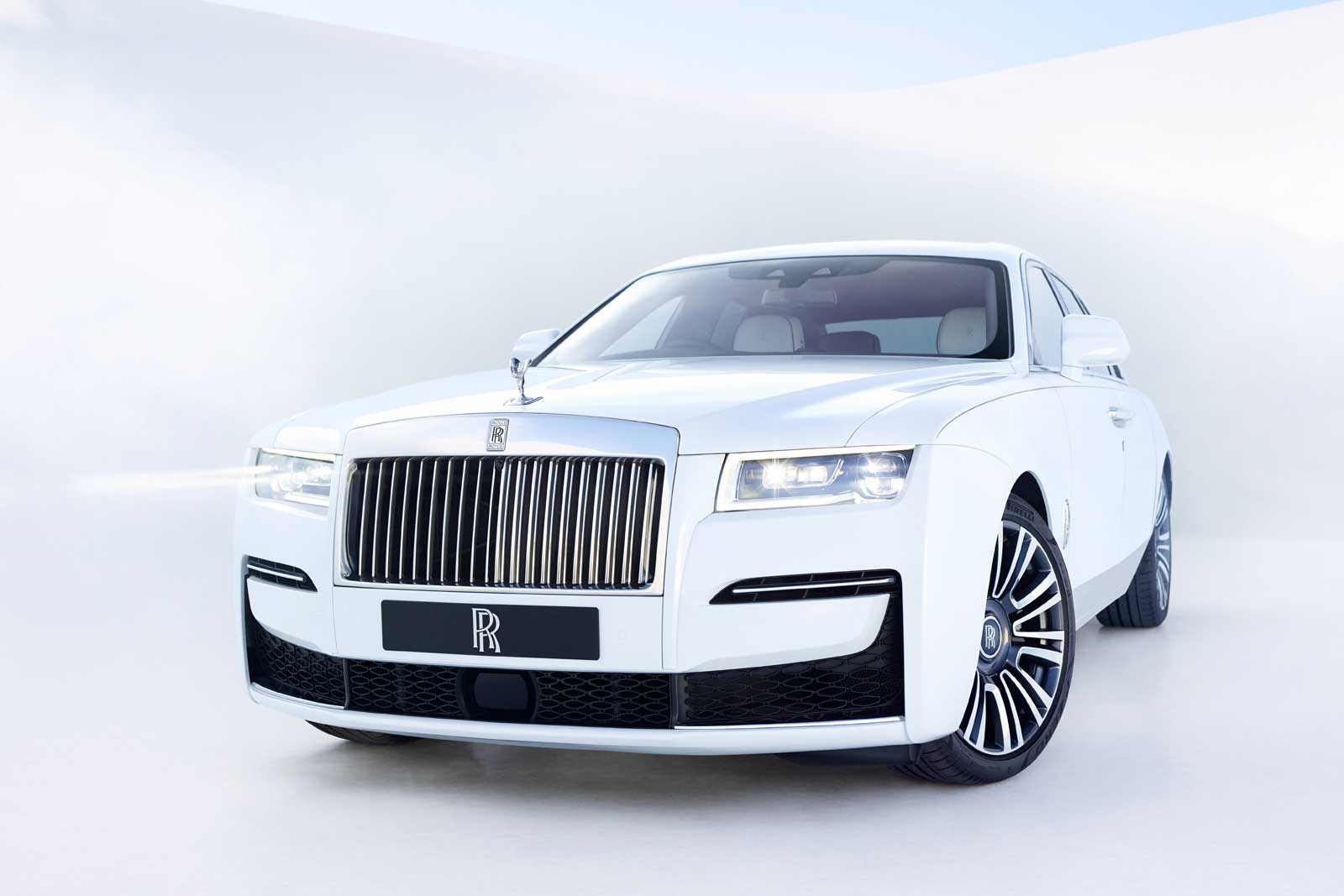 Bigger, quieter and more sumptuous than ever before.

After teasing us for quite a while, the 2021 Rolls-Royce Ghost has officially been revealed. The new ultra-luxury sedan is the most technologically advanced car the British marque has produced so far, and replaces the previous-generation car that spanned a decade and became the company’s most successful product in its 116-year history. 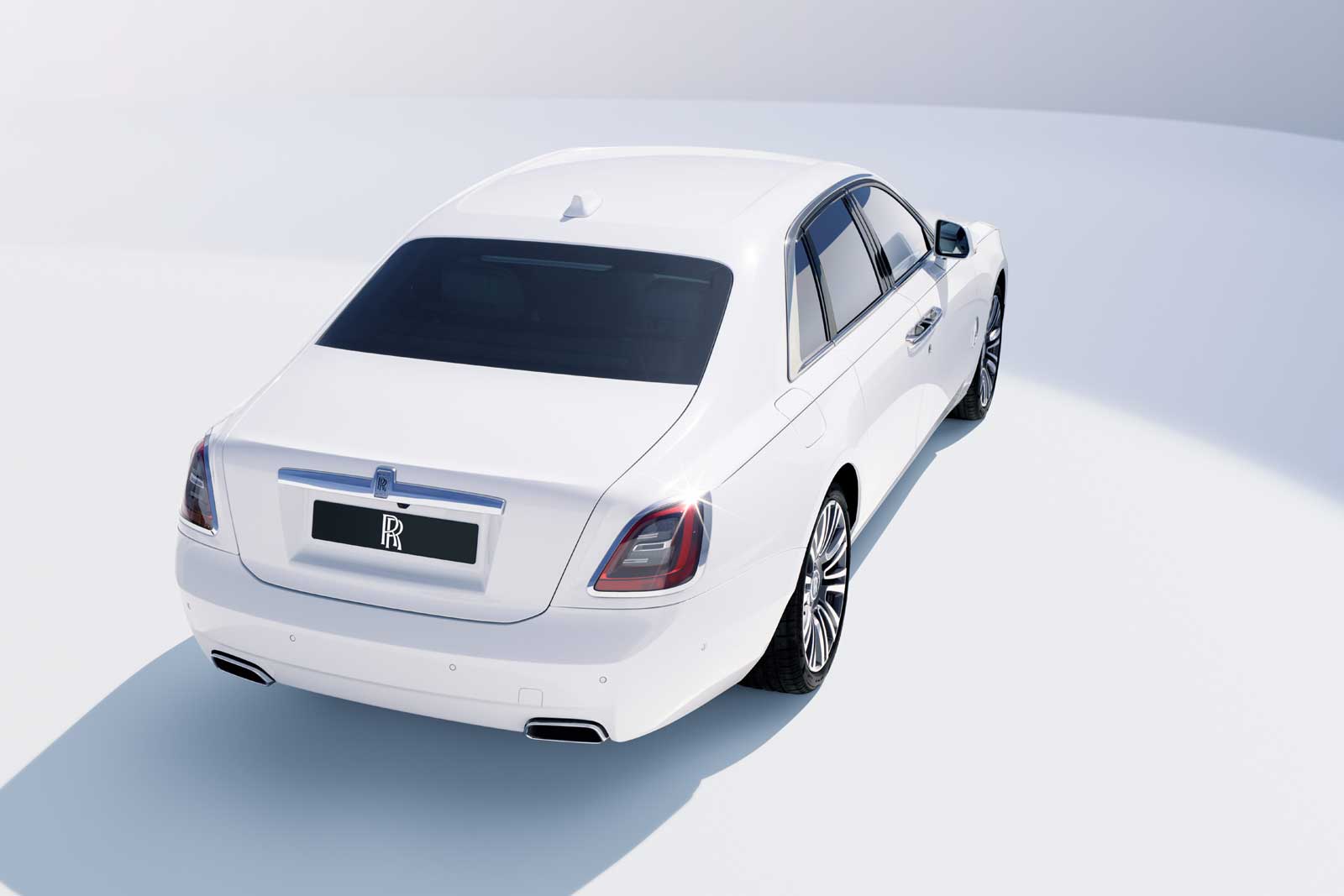 “To create a new product that would resonate with our Ghost clients for the next ten years meant we had to listen carefully to their demands,” says Rolls-Royce in its press material. “Today we set new standards in customer centricity by creating a completely new motor car for a unique group of Rolls-Royce’s clients. These business leaders and entrepreneurs demand more of their Ghost than ever. They require a new type of super-luxury saloon that is dynamic, serenely comfortable and perfect in its minimalism. Ghost is this product.”

Although the brand claims the 2021 Rolls-Royce Ghost is all-new save for the Spirit of Ecstacy and the door-mounted umbrellas, the sedan receives a familiar engine. The twin-turbocharged, 6.75-litre V12 engine that already equips the Rolls-Royce Cullinan and the Phantom finds its way into the Ghost, which develops 563 horsepower (571 PS), along with 627 pound-feet of torque. It’s managed by an eight-speed automatic transmission, which sends that muscle to a new all-wheel drivetrain. The dash from 0 to 60 mph is said to be achieved in 4.6 seconds. 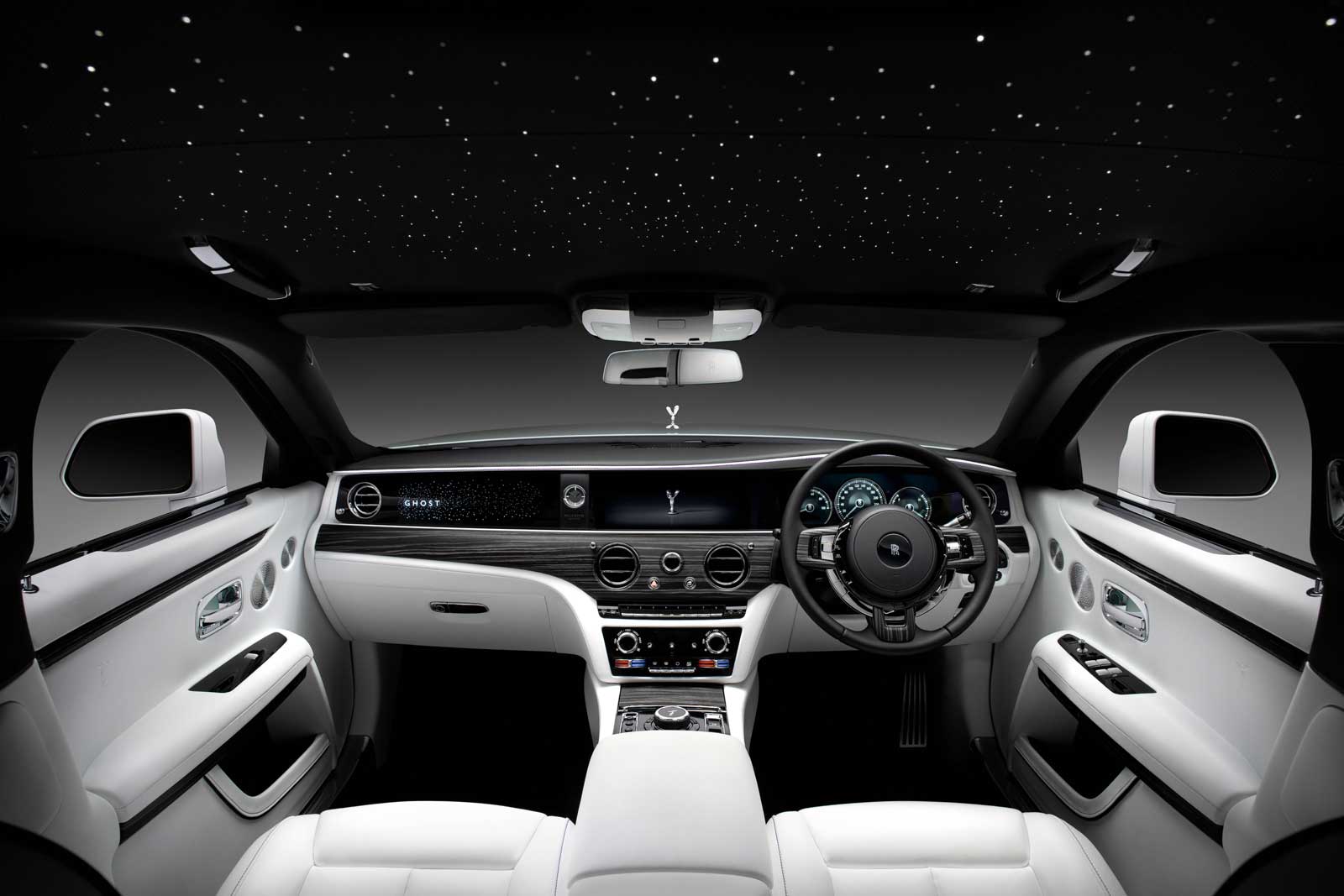 All-wheel steering is also new, and the Ghost’s new Planar Suspension System is said to deliver “a sense of flight on land,” the result of ten years of work perfecting what is now known as the brand’s Magic Carpet Ride. A front-mounted camera scans the road ahead to help the air suspension get ready for road imperfections, and as before, the transmission swaps its gears according to the road topography, thanks to satellite connectivity. In other words, the Ghost’s ride quality should be unsurpassed.

Obviously, improvements have to be made with every new generation of a vehicle, and thanks to aluminum spaceframe construction, engineers were able to develop complex forms that don’t resonate like steel does, in addition to sandwiching sound-deadening material—220 pounds or 100 kilograms of it—into various areas of the structure to make the Ghost as quiet as possible. A soft undertone, or a “whisper,” was actually added inside the cockpit because the silence was, um, disorienting. 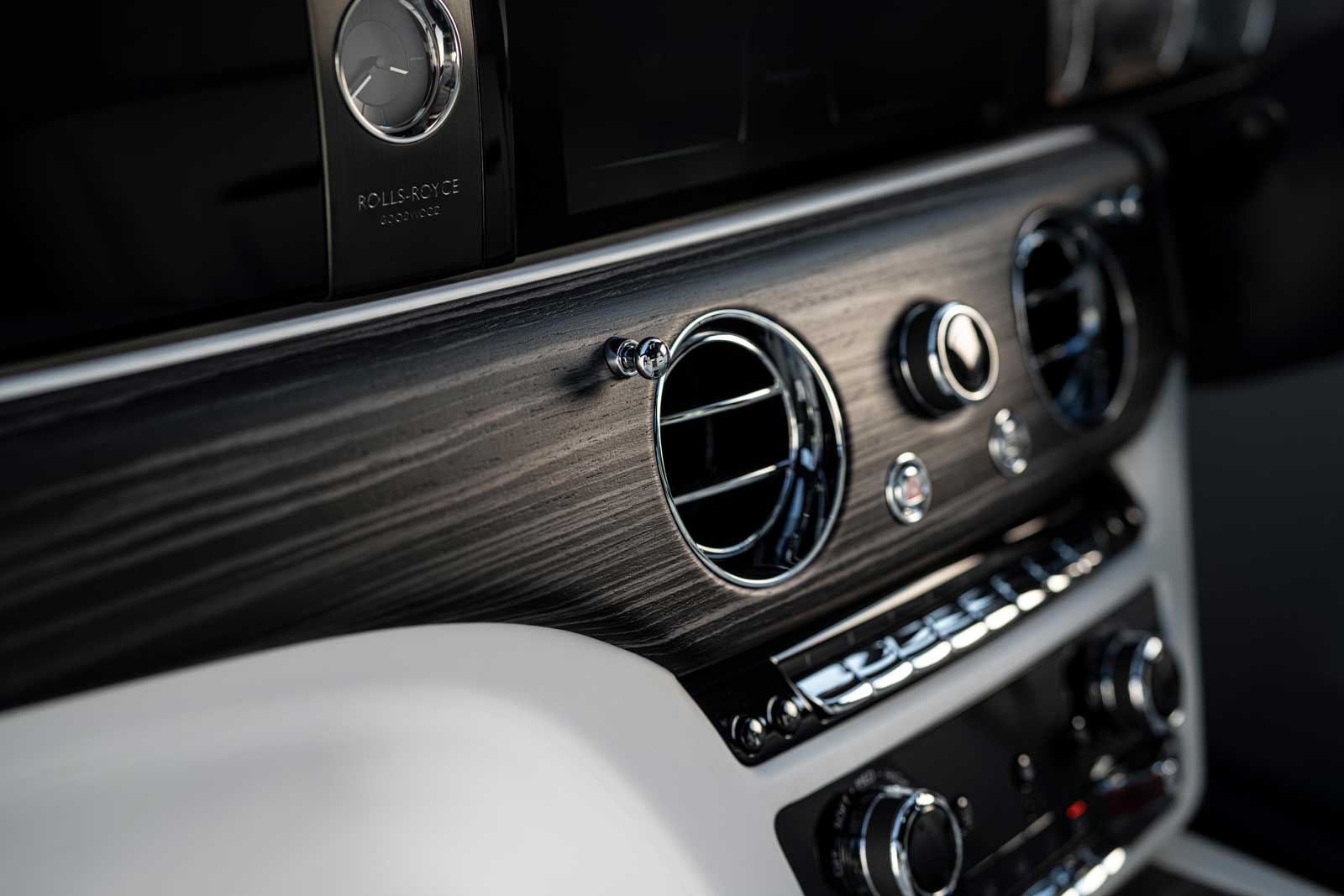 The 2021 Rolls-Royce Ghost also includes many new thoughtful features, too. In the previous-generation car, as well as in the Rolls-Royce Wraith and Dawn, passengers could close the doors at the touch of a button—because bending over to grab the door handle is exhausting. Now, the doors can be opened with an electrical assist as well, and can be closed at the push of a button on the exterior handle. Transversal, longitudinal and G-force sensors are installed in each door so its movement occurs at the same speed, regardless of the car’s inclination on a hill or in the driveway.

Other items include LED and laser headlights, vision assist, a 360-degree camera system, head-up display, a Wi-Fi hotspot, active park assist as well as a 1,300-watt, 18-channel surround sound system. Ten cows (actually, 20 half-hides) graciously cover the insides of the Ghost’s cockpit, while two new finishes have been developed: the lava rock-inspired Obsidian Ayous, and Dark Amber, which highlights aluminum particles like veins in dark wood trim. And let’s not forgot the new illuminated Ghost nameplate on the passenger side of the dashboard, which is surrounded by 850 stars. 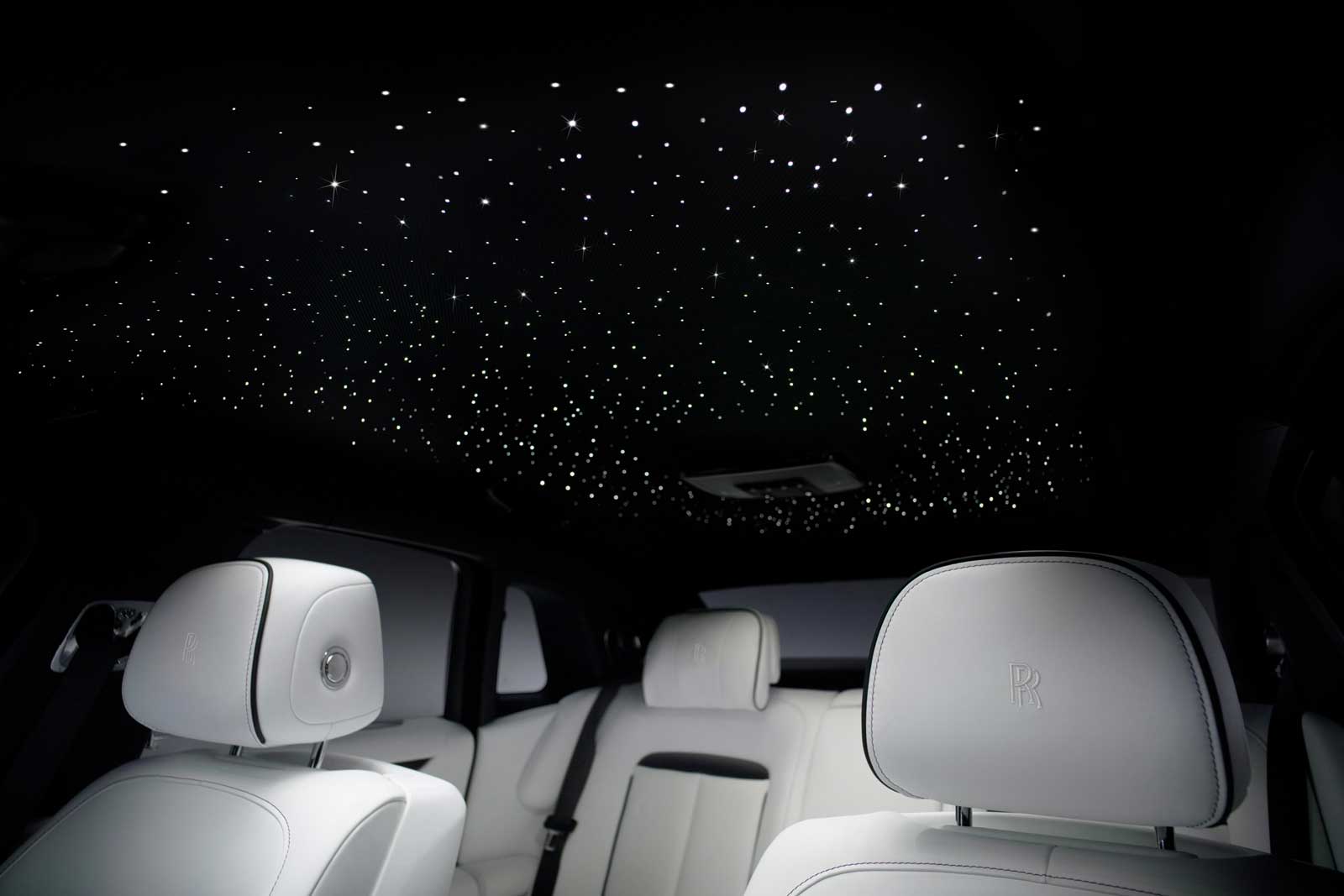 The car’s exterior design is new as well, and as before, regular- and extended-wheelbase variants of the 2021 Rolls-Royce Ghost will be offered. The sedan has gained 1.2 inches or 30 mm of width along with 3.5 inches or 89 mm of overall length, and the regular-wheelbase version tips the scales at 5,628 pounds or 2,553 kg.

Pricing has not yet been disclosed, but the previous-generation Ghost retailed from about $350,000 USD. It will once again rival the Mercedes-Maybach S-Class and the Bentley Flying Spur in the ultra-luxury sedan segment.