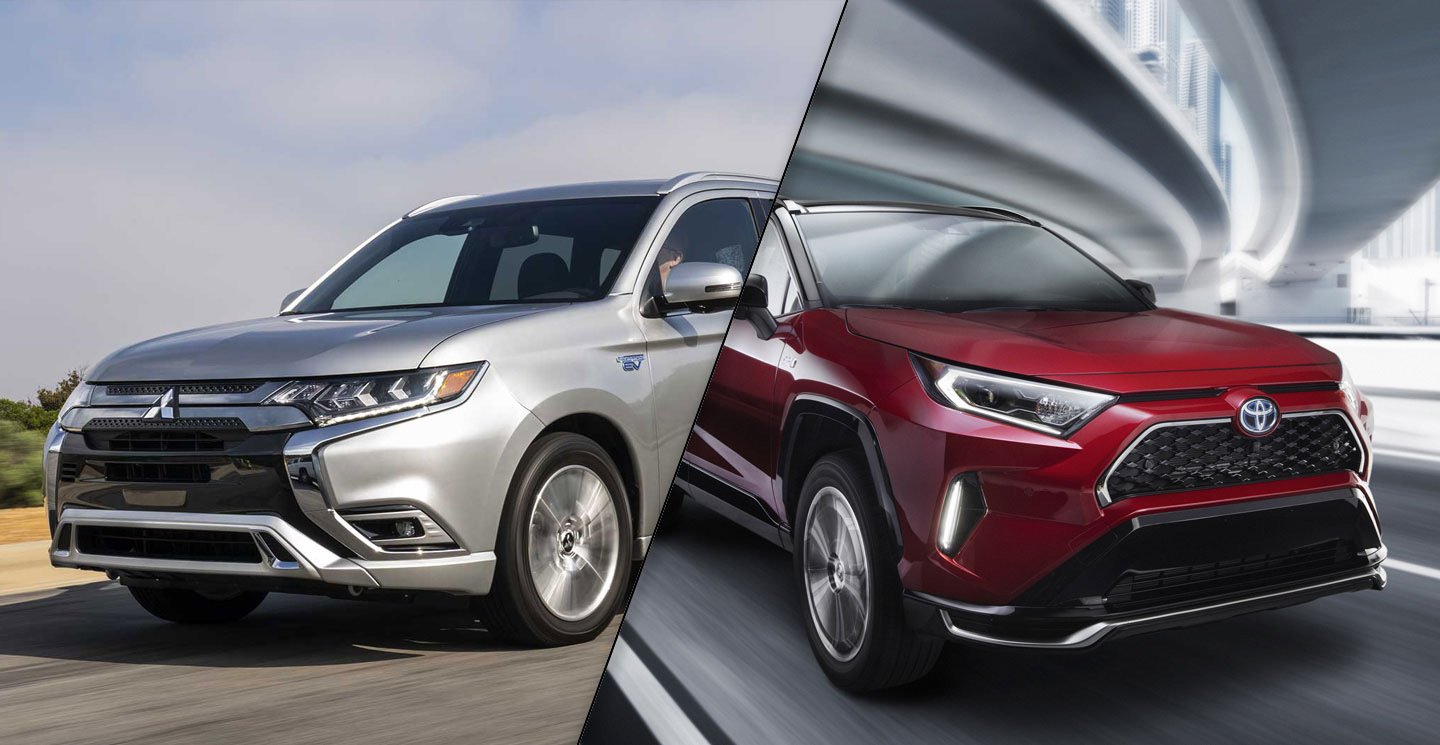 While the Mitsubishi Outlander PHEV has enjoyed a monopoly for a few years, the competition has now arrived. The Toyota RAV4 Prime is set to throw a wrench in the Outlander’s gears and on a number of levels.

The Toyota RAV4 is one of the best-selling SUVs on the continent and that’s not about to change. The RAV4 is also offered as a hybrid which, given the demand, can be difficult to source in many markets. Finally, we have the RAV4 Prime, or the plug-in version. We expect that it will ride the RAV4’s wave of success and itself quickly become a best-seller among plug-in SUVs.

The Mitsubishi Outlander PHEV has gained notable praise for its innovative and efficient powertrain. It has served its purpose well however buyers will have to wait for the 2022 model year for an updated version. Even so, it remains competent in many respects.

Both plug-in SUVs will also be joined by the Ford Escape PHEV which we’ve already compared to the new 2021 Toyota RAV4 Prime. Jeep and other carmakers have plans for more PHEVs in the near future as well. For this round, it’s all about the all-new Toyota versus the veteran 2020 Mitsubishi Outlander PHEV.

Depending on the country, state, and province, both of these PHEV SUVs can be eligible for various incentives.

Like all Toyota hybrid vehicles with AWD, the rear axle is run by an electric motor which has no physical link to the front. This motor is in part responsible for the RAV4 Prime’s battery-only range of 68 kilometers, or 42 miles. Combined fuel consumption is rated at an impressive 2.6Le/100km, or 90 MPGe.

The other upside to the technology is that performance is more than plentiful. With AWD traction, the Prime hits 100 km/h from a standstill in only 6.2 seconds (0-60 mph in 5.7 seconds). Speaking of brisk timeframes, a full charge for the RAV4 Prime requires only three hours with a Level 2 charger.

The 2020 Mitsubishi Outlander PHEV is powered by a 2.0-litre 4-cylinder engine that is paired to two electric motors. Total system output is rated at 197 horsepower. Its 12 kWh battery pack enables the Outlander to travel 22 miles or 35 km on pure electric power. It is rated at a combined 3.2Le/100km, or 74 MPGe. A full charge is achieved in 3.5 hours on a Level 2 charger.

Clearly, the Mitsubishi is at a disadvantage as not only is it less powerful and not as energy-efficient, but it’s somewhat less sporty than the RAV4 Prime.

In Canada, the 2020 Mitsubishi Outlander PHEV SE S-AWC is available with an 8-inch screen, Apple CarPlay and Android Auto, heated front seats, keyless entry, satellite radio, 18-inch wheels, blind-spot monitoring, rear cross-traffic alert and more. The base SEL S-AWC in the US comes with all of the above-mentioned items plus leather seats, 8-way power driver and passenger seats, a power liftgate, and much more. In fact, the SEL trims are almost identical in both countries.

In the US, the base 2021 Toyota RAV4 Prime SE will feature heated front seats, an 8-way power driver’s seat, a 7-inch driver information display, an 8-inch touchscreen display with Amazon Alexa, Android Auto and Apple CarPlay compatibility, a power liftgate, and so on. Among the many included standard safety features will be blind-spot monitoring with rear cross-traffic alert. In Canada, the SE includes all of the above however adds heated front and rear seats as well a heated steering wheel. These items are optional in the US under the optional Weather & Moonroof Package.

It is possible to load both models with an impressive array of luxury, safety and technology features.

The Outlander is aging well. Mitsubishi’s Dynamic Shield design works best on the Outlander. While the exterior remains contemporary, the cabin is not showing as well. The dashboard’s ergonomics are fine however if you’re into technology, you might find the 8-inch screen’s graphics disappointing. The same goes for the cabin’s overall styling – it’s not befitting of a vehicle in this price range.

Toyota has made sure that the new RAV4 Prime will not go unnoticed, at least among the sea of RAV4s already on the road. It starts with the current RAV4’s boxy flared arches, tall and flat lines, two which is added more visual enhancements. The RAV4 Prime sports a large front splitter, vertical LED lamps, and 19-inch wheels, On top of all this, the available two-tone exterior paint schemes are the icing on the cake. The cabin as well is more expressive with a flare that is typically Toyota and the ergonomics are very good.

We’ve touched on the Toyota RAV4 and its importance for the Japanese giant. It is a volume-leader and thus one of the most visible Toyota products on the road today. The Hybrid and the Prime are extremely appealing for their efficiency and value. The Prime specifically will cater to a smaller group of buyers with slightly deeper pockets but it will serve as the product line’s flagship model.

The 2020 Mitsubishi Outlander PHEV has a very important role within Mitsubishi’s lineup. Not only is the PHEV the Outlander line’s top model but it is the carmaker’s flagship model above all in North America. While it shined bright in the recent past, the star that it was has begun to dim and this will be a serious issue for troubled Mitsubishi. The new 2022 Outlander PHEV can’t get here soon enough we think.

We universally recommend the Toyota RAV4, no matter the trim, powertrain, or model year for that matter. The Prime is top-dog among compact PHEV SUVs, of this we are quite convinced.

If you live in the US, the Honda CR-V hybrid is also available alongside the Ford Escape hybrid and PHEV, and the Mitsubishi Outlander PHEV. Of these, the only advantages to the Outlander are its larger cabin and AWD capability with PHEV technology, something that is not offered with the Escape PHEV.

Above all, however, the 2021 Toyota RAV4 Prime is the more interesting choice.