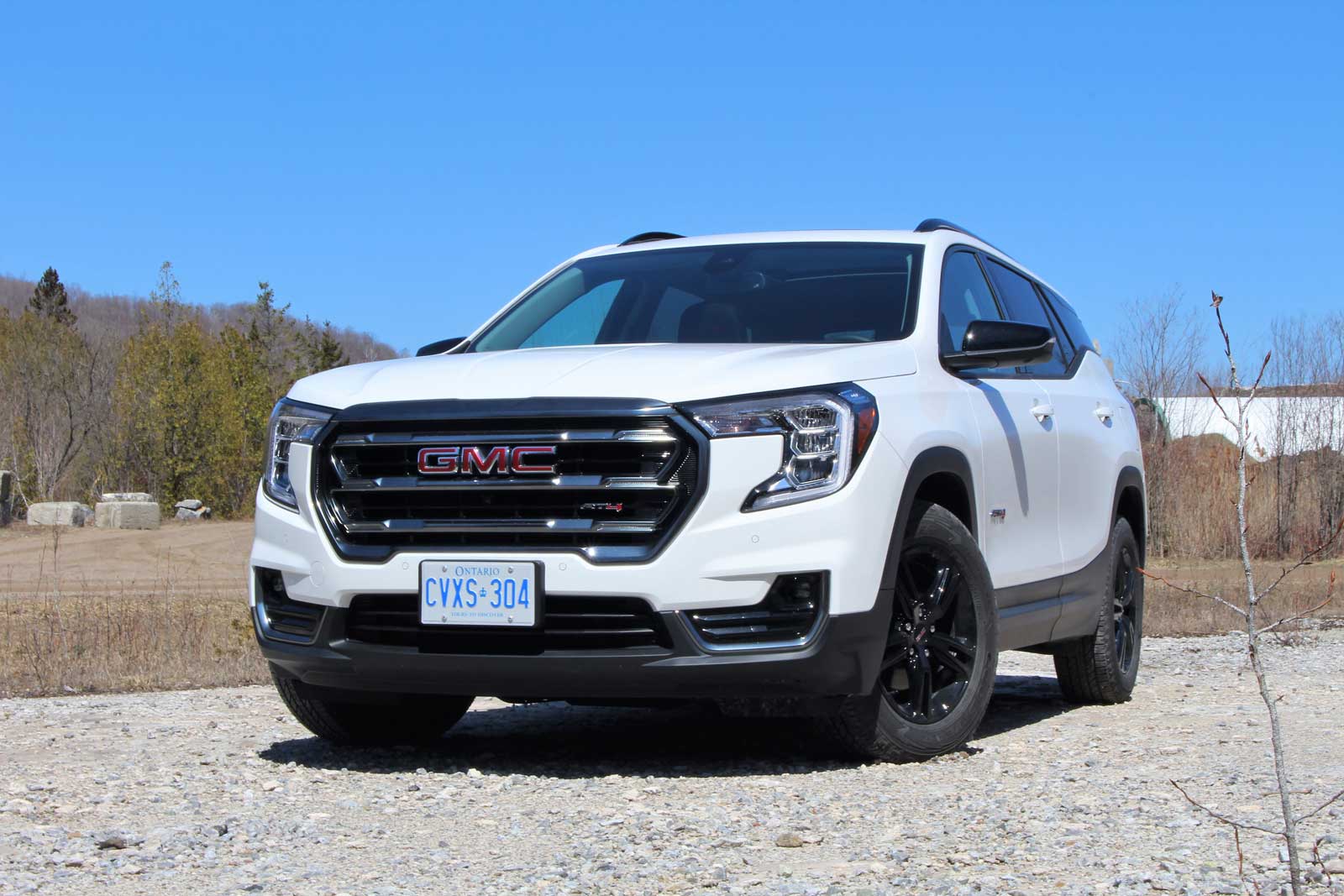 Sometimes, a vehicle doesn’t need to boast outstanding features or dominate its competition in any way to be popular or appreciated. Such is the case with the 2022 GMC Terrain, which received a mid-cycle refresh that includes a new trim level, enhanced styling and more features at a lower price.

Introduced for the 2018 model year, the second-generation Terrain was actually scheduled to receive said update for 2021, but COVID-19 reared its ugly head and threw a wrench into those plans. The refreshed was thus pushed back to ’22. 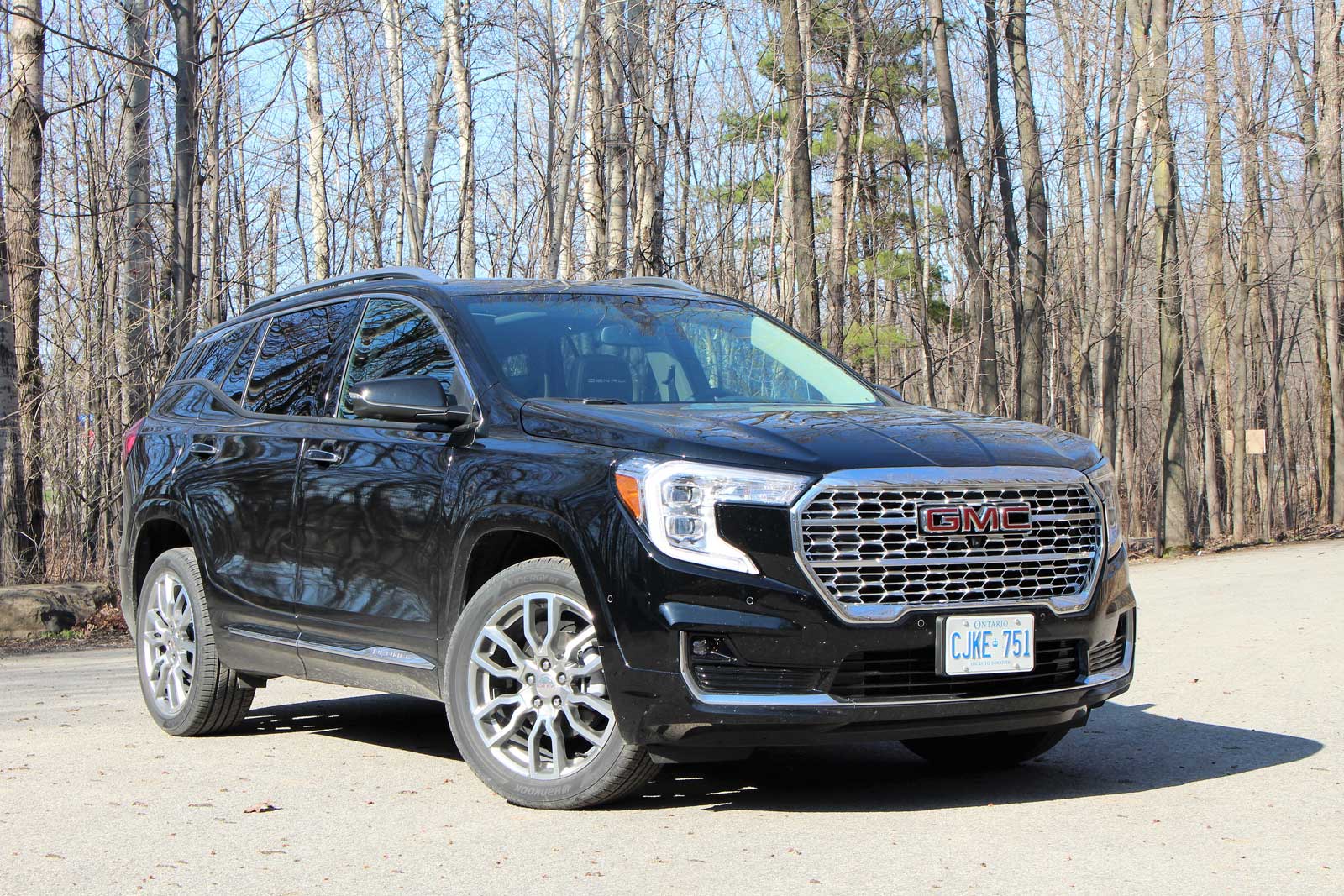 The 2022 GMC Terrain is the smallest utility vehicle in the brand’s lineup, and it’s GMC’s second-best-selling vehicle behind the Sierra pickup line. It competes directly against its Chevrolet Equinox and Buick Envision corporate cousins, but also the Ford Escape, the Honda CR-V, the Hyundai Tucson, the Jeep Cherokee, the Kia Sportage, the Mazda CX-5, the Mitsubishi Outlander, the Nissan Rogue, the Subaru Forester, the Toyota RAV4 and the Volkswagen Tiguan. That’s a lot of rivals.

What exactly is new about the 2022 GMC Terrain? For starters, there’s a new front fascia that may look familiar, but now features LED headlights across all trim levels, incorporated into taller C-shaped clusters alongside a bigger and more detailed grille. The taillamps include bigger reverse lights, and that’s about the only change at the rear of the crossover. There are new paint colors and new alloy wheel designs as well. 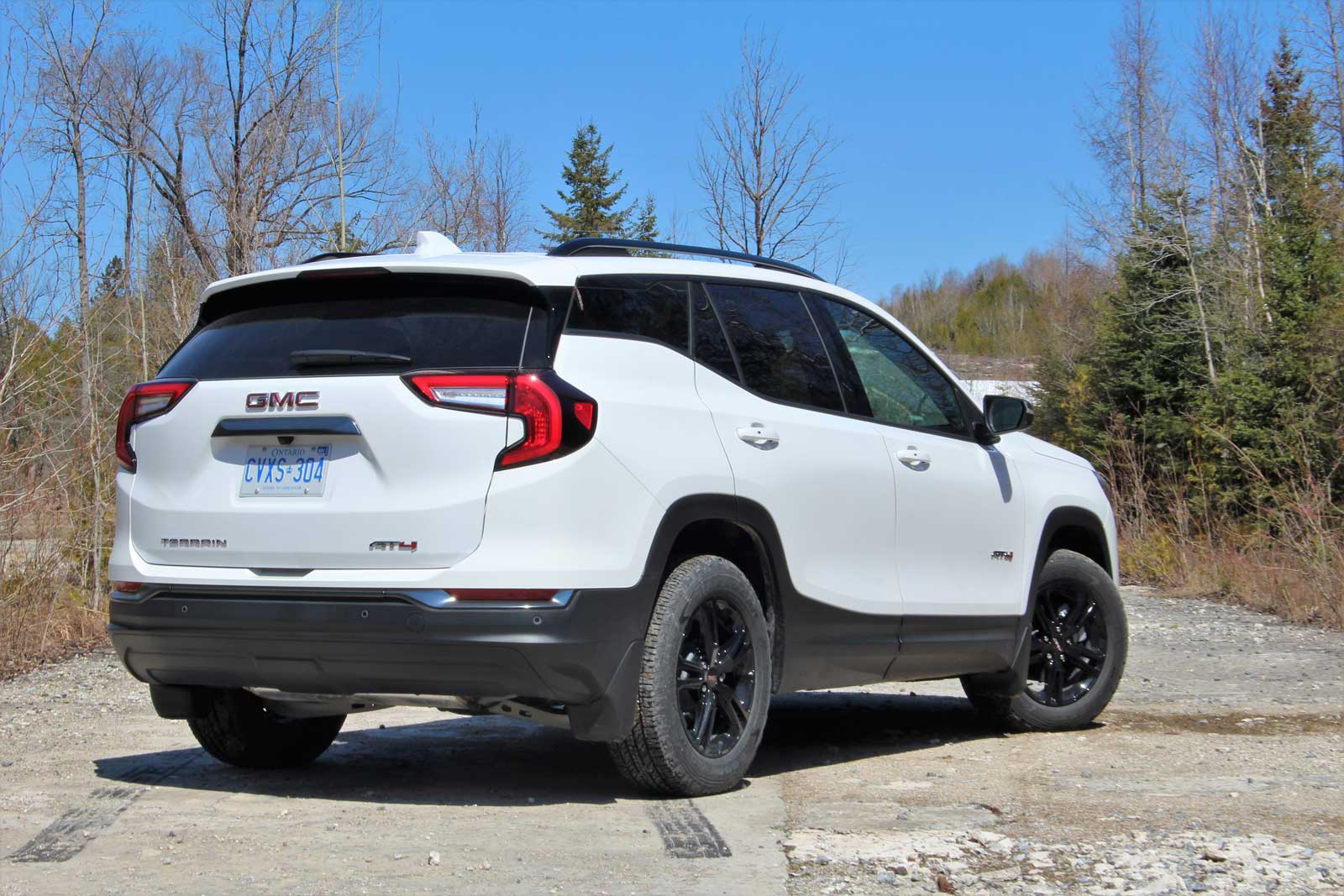 The revised Terrain’s interior hasn’t changed much in design, aside from reshaped transmission rocker switches, but there are new materials. Jet Black and two-one Medium Ash Gray/Jet Black are back, while Brandy/Jet Black and Light Platinum/Taupe have been replaced with Light Platinum/Dark Galvanized. On the technology homefront, SiriusXM radio is now standard on all trims (with a trial subscription as usual), as is wireless Apple CarPlay and Android Auto integration.

Four trim levels of the 2022 GMC Terrain are available: SLE, SLT, AT4 and Denali. The big news is the addition of the AT4, the most rugged-looking variant of the bunch with exclusive details such as 17-inch gloss black wheels, a steel engine compartment skid plate, tan interior stitching and AT4 logos embroidered in the front seat headrests. However, the new AT4’s appeal is mostly cosmetic, as there are no mechanical differences between it and the other trims. Nonetheless, the AT4 variant on the brand’s other models accounts for 25% of its sales. 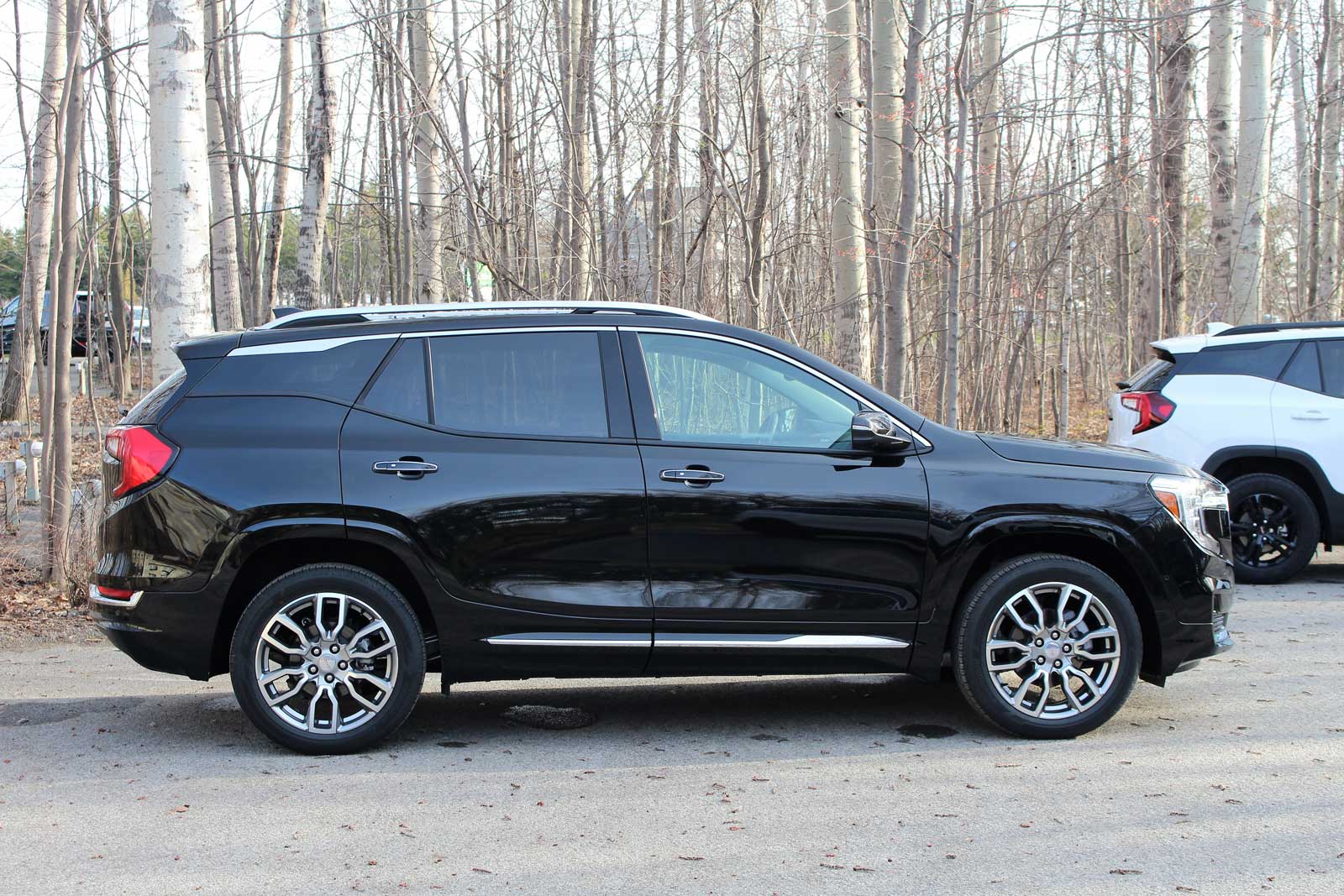 The Denali is back in 2022 after being unavailable throughout most of the 2021 model year. GMC’s Denali sub-brand line was launched in 1999 and accounts for 26% of all GMC vehicle sales, so these range-topping variants maximize profits for GM. The Terrain Denali gets exclusive body-color lower trim, chrome door handle surrounds and bright 19-inch alloys, in addition to its unique grille finish. It also gets an eight-inch digital driver instrument panel, Automatic Parking Assist and wireless phone charging, along with standard features that are optional in lower trims, such as blind spot monitoring, adaptive cruise control, new head-up display, GM’s Safety Alert Seat, navigation and a seven-speaker Bose stereo.

In both SLE and SLT trims, an Elevation Package can be ordered, which adds a sinister blacked-out appearance to the crossover. GMC says 22% of its customers choose the Elevation Edition package or trim level across its model lineup. On the Terrain, it features gloss black 19-inch wheels, a darkened front grille, black roof rails, black exterior accenting and black badging. It can be combined with silver, white, black and dark blue paint colors. It’s a low-cost package that adds considerable flair to the Terrain in its more affordable variants. 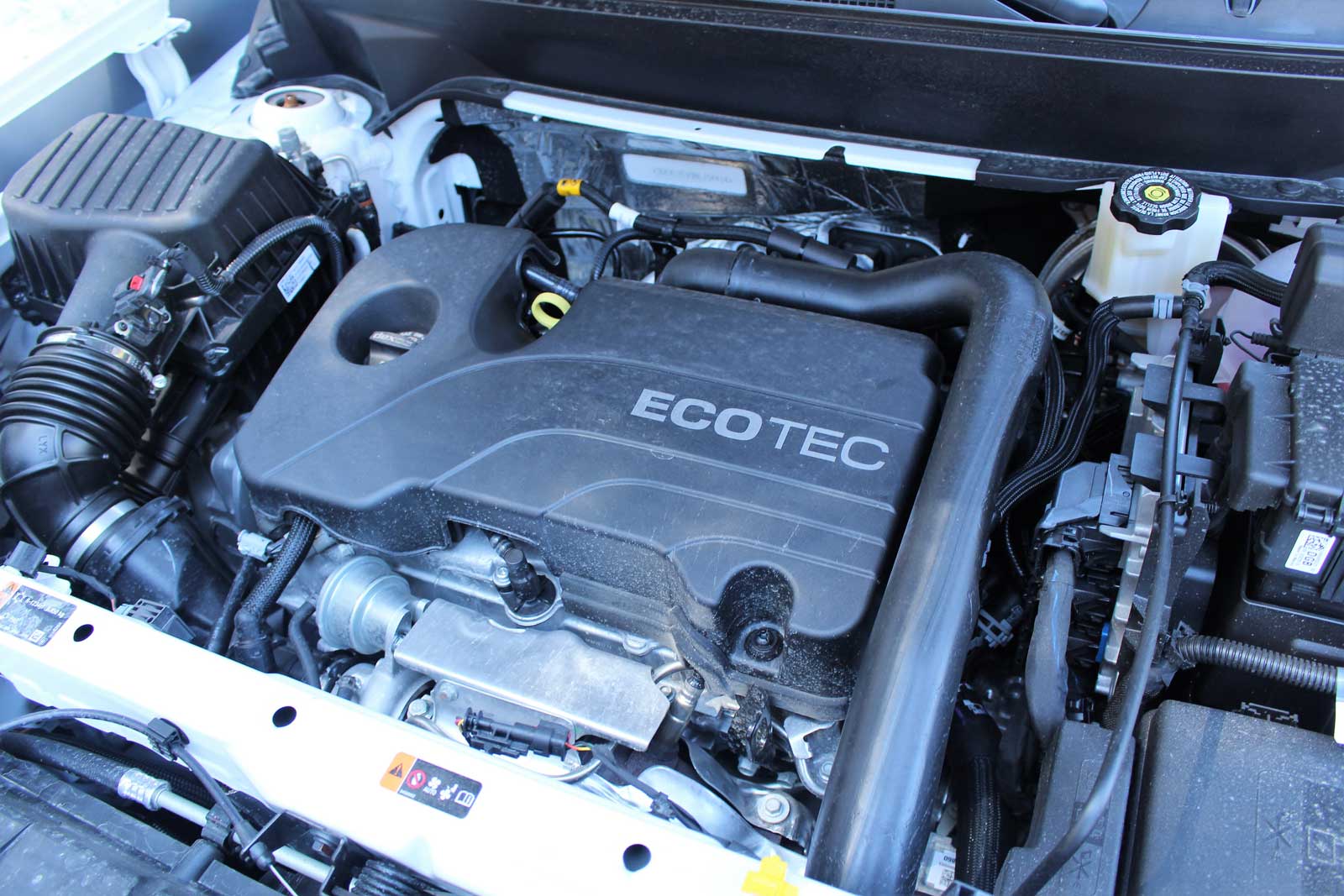 Under the hood, there’s one engine choice left, and that’s the company’s turbocharged 1.5L inline-four with 170 horsepower and 203 pound-feet of torque. It’s managed by a nine-speed automatic transmission, connected to either a front-wheel or an all-wheel drivetrain in the base SLE, while all other variants of the 2022 GMC Terrrain in Canada are equipped as standard with AWD. In the U.S., both the SLE and SLT can be specified with either FWD or AWD, while the AT4 and Denali are AWD only. The latter can be switched on or off with a console-mounted rotary dial, and there’s also an Off-Road Mode that is said to adjust the AWD, traction control and stability control systems to better react on surfaces such as gravel, dirt and sand.

The small-displacement engine has enough guts to get the Terrain moving along swiftly, and will do the trick for the vast majority of compact crossover shoppers. With the all-wheel drivetrain, it boasts city/highway/combined fuel economy ratings of 25/28/26 mpg in the U.S., and 9.6/8.3/9.0 L/100 km in Canada. That’s quite good, and we even managed to keep the average above 31 mpg (under 7.5 L/100 km) on the highway portion of our drive. Around town and on twisty country roads, our average was more in the 25 mpg (9.5 L/100 km) range. 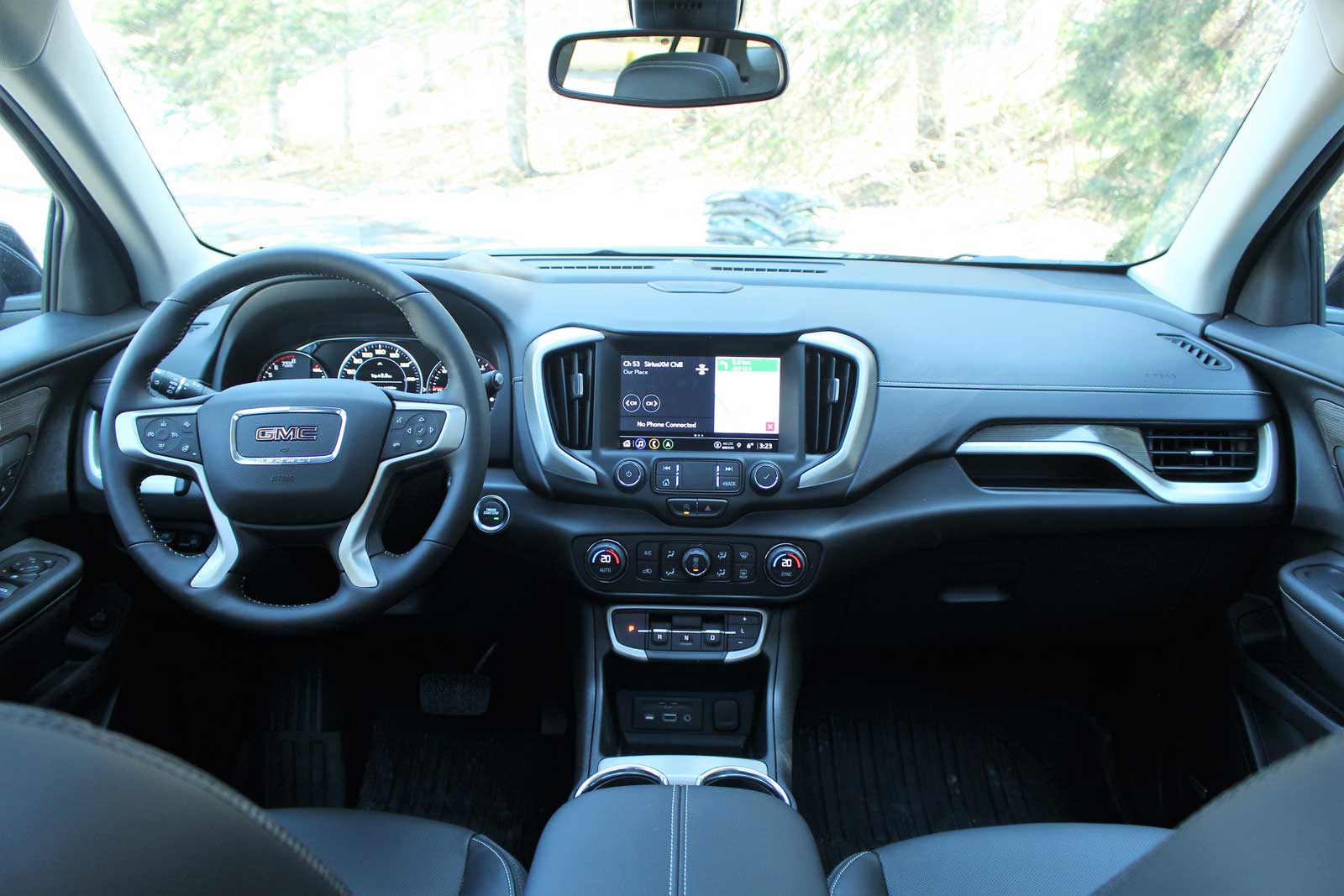 Also, the Chevrolet Equinox shares the Terrain’s 1.5L engine, but must do with a six-speed automatic instead of the GMC’s nine-speed unit. Strangely enough, the Chevy gets better fuel economy ratings. Oh well. Moreover, towing capacity is limited to 1,500 pounds or 680 kilograms, and GM figures if customers need more than that, they can move up to the GMC Acadia and its 4,000-pound capacity. 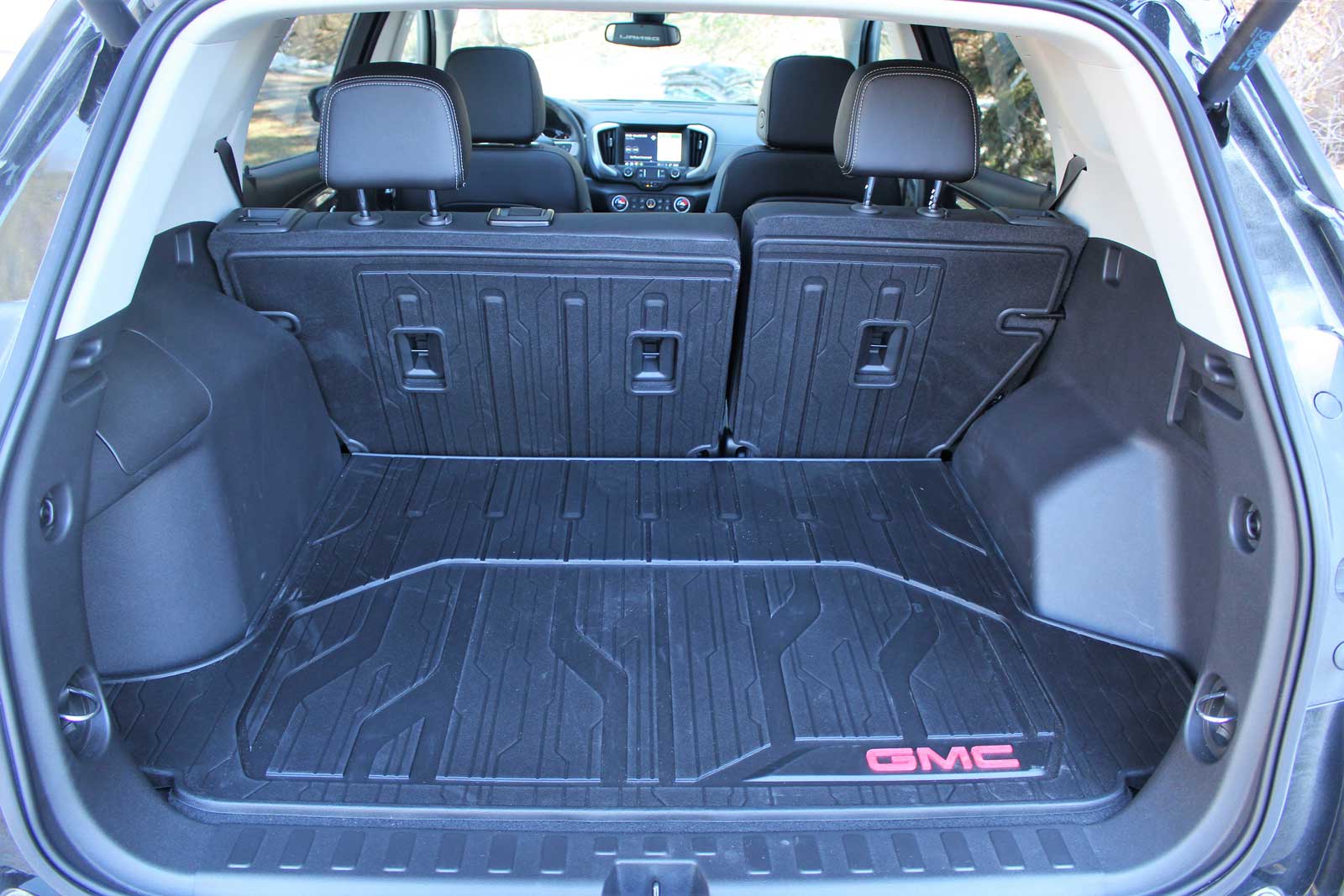 The Terrain has good road manners and is easy to drive, its seats are comfortable and supportive, and there’s plenty of legroom front and back. The infotainment system is a cinch to use with big button zones and a reactive touchscreen. Cargo space is below average in the compact segment, but still sufficient for a family of four. Load up the kids, set up a data plan for the on-board 4G LTE Wi-Fi hotspot, and head to your destination without fuss.

However, the 2022 GMC Terrain does have some shortcomings, which is normal for a vehicle whose generation was introduced five years ago and many rivals have been redesigned since then. Suspension and wind noise is higher that we’d like, the front pillars are wide and manoeuvring through busy city intersections is tricky, the turning circle could be narrower, and the transmission switches aren’t the most intuitive way of shifting into gear and putting the vehicle back in park—but maybe we’re just old-fashioned. 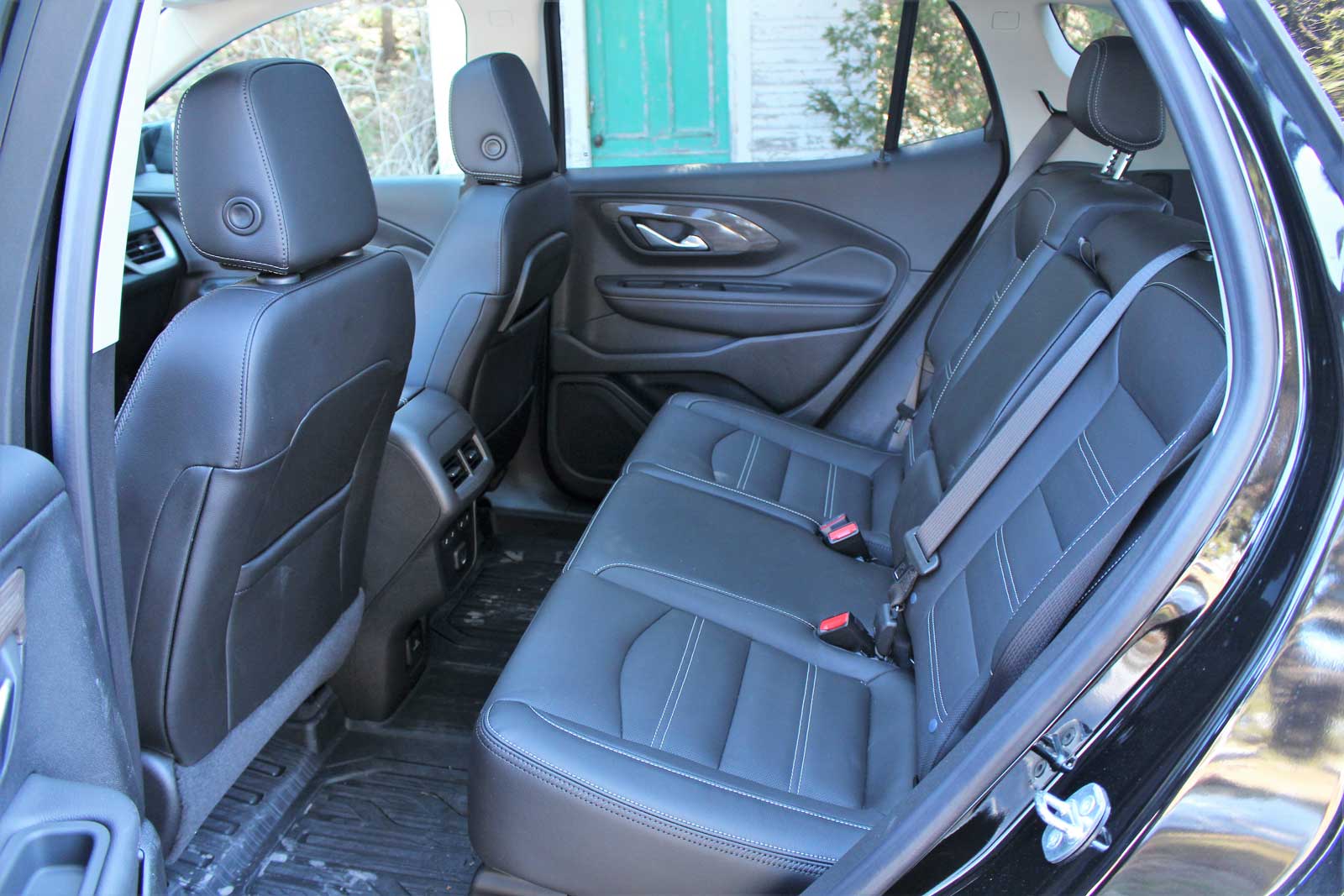 The 2022 GMC Terrain’s new AT4 trim certainly has appeal, but we just wish it would offer a little more in terms of off-road capability. The ride height is unchanged compared to the other trim levels, there’s no trick suspension, and aside from the grille design, there’s little distinction here. The Denali is the more equipped variant of the bunch, with heated and ventilated front seats, heated rear outboard seats and more, but it’s not all that luxurious.

In Canada, pricing starts at $32,498 for the base SLE FWD, including freight and delivery charges, and at $34,898 for the SLE AWD. The SLT AWD is listed at $37,498, while the Elevation Edition package adds $995 to the SLE and SLT. GMC sweetened the deal by dropped the SLE and SLT’s MSRPs by $600 and $800 respectively, compared to the 2021 model. We think the value proposition here is a $40,493 SLT with the Elevation Package and the GMC Pro Grade Package that rounds up a panoramic sunroof, the aforementioned Bose sound system and navigation. 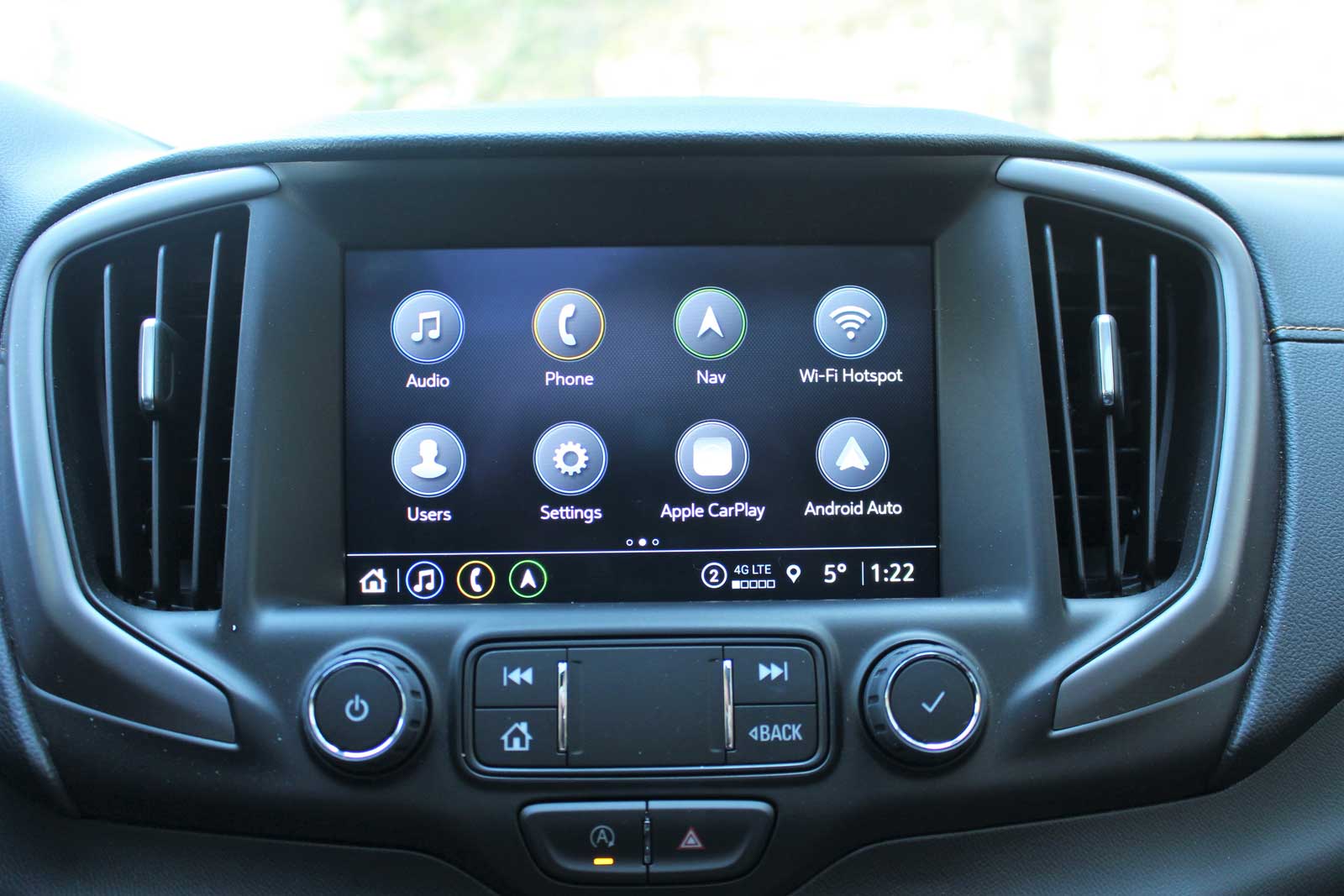 The Terrain AT4 comes in at $38,098 while the Denali is priced from $43,498. The Terrain Denali now includes last year’s optional Denali Pro Grade Package and Tech Package, valued at about $3K, while getting a price increase of only $1,000.

In the United States, pricing starts at $29,095 including the destination freight charge, while the SLT is listed at $33,095 and AWD adds $1,600 to the tab in both cases. The Elevation Package requires a $795 investment above and beyond the SLE and SLT’s MSRPs. The AT4 goes for $35,195 while the range-topping Denali is priced from $37,795. The U.S. market received similar price drops compared to the 2021 model, and the stripper SL trim has been dumped. 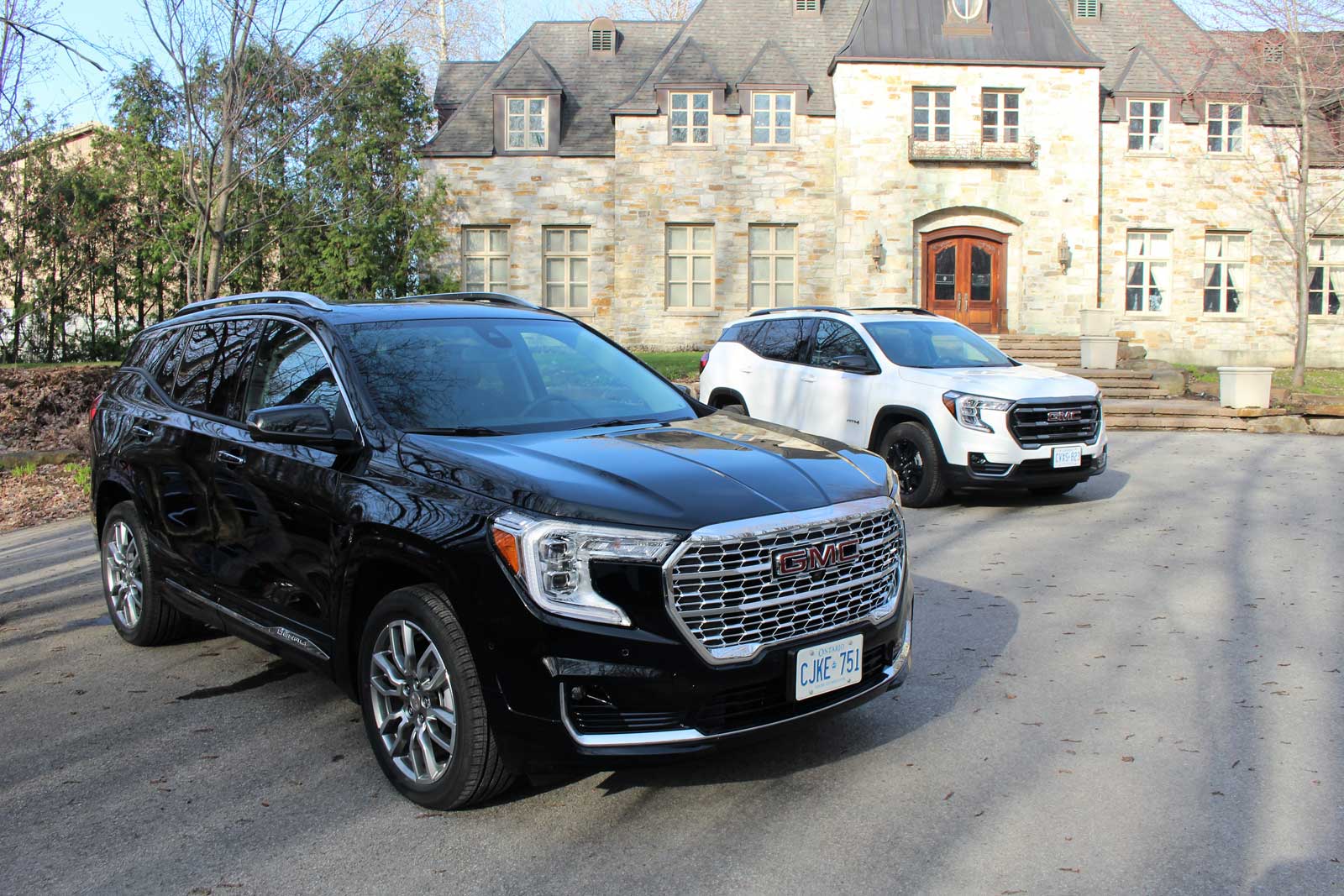 The 2022 GMC Terrain definitely has the style, the comfort, the fuel economy and the affordability to succeed in our marketplace. However, it’s near the bottom of the compact crossover sales chart, partially because supply has been tight for a while now. It’s not perfect, but none of its competitors are either. Overall, the Terrain is an honest, easy-to-live-with utility vehicle that doesn’t overachieve in any way, but the sum of its parts amounts to a surprisingly competent family hauler. Nothing more, nothing less.

$5.5 Billion of this investment will go toward a new factory in Georgia that will only build electric vehicles. The other $3 Billion...
Read more
Previous articleThe Semi-Conductor Shortage is Not Over Yet: Volkswagen and Audi to Remove Features
Next article2017-2019 Chevrolet Bolt: 62% Have Received a New Battery as of Now