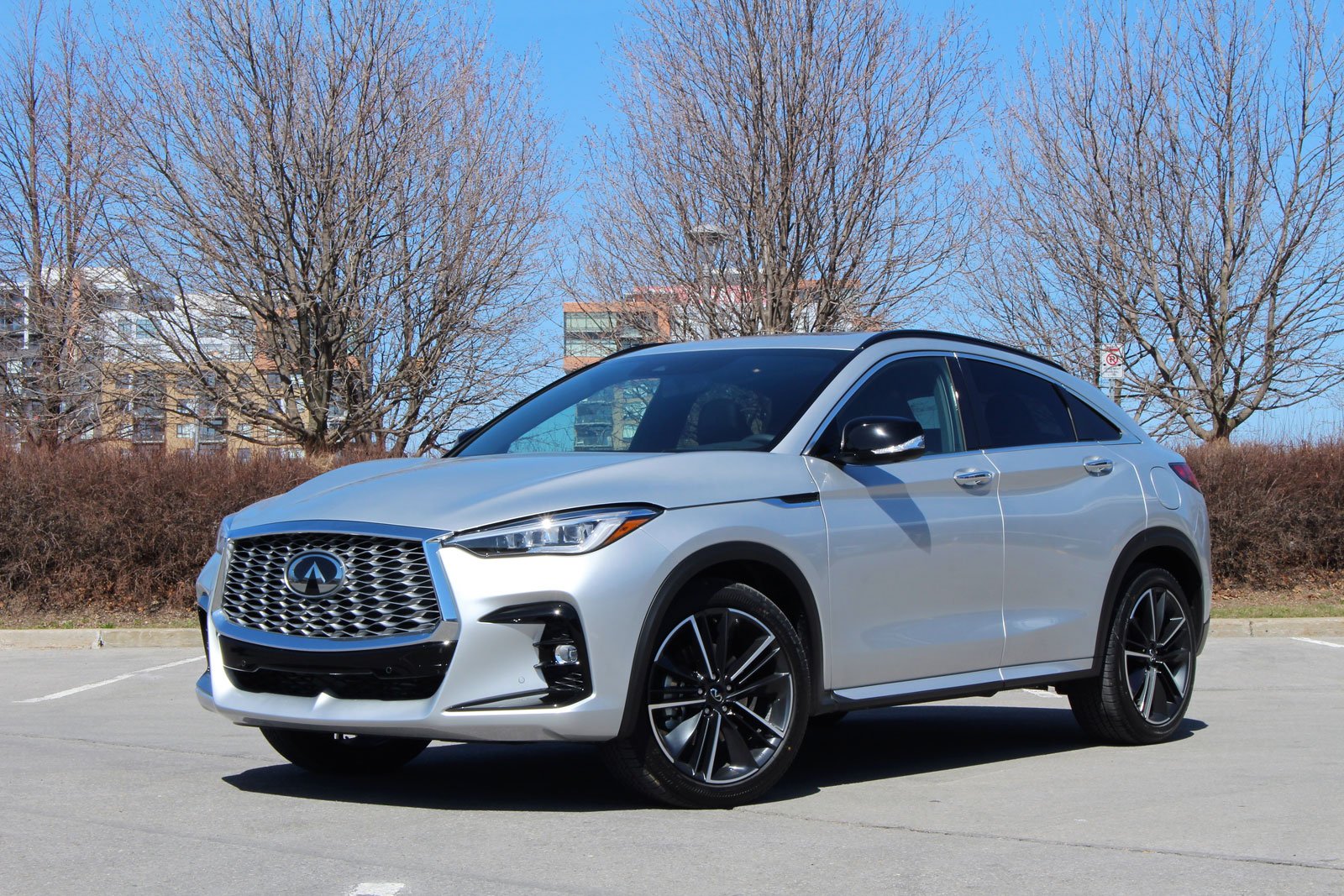 A smooth and stylish crossover coupe.

An all-new crossover coupe will soon be available in Infiniti dealerships, although it’s not actually all new. The 2022 Infiniti QX55 shares its architecture with the current QX50, and according to the brand, its design pays homage to the late, great Infiniti FX.

By creating the latter, Infiniti claims it invented the coupe-like utility vehicle genre that the German luxury brands are pushing to market right now. Perhaps without even realizing that it would become a trend. The QX55 currently is the only Japanese-brand crossover coupe, after the sporty Acura ZDX was sold in North America for a few years, but never really caught on. 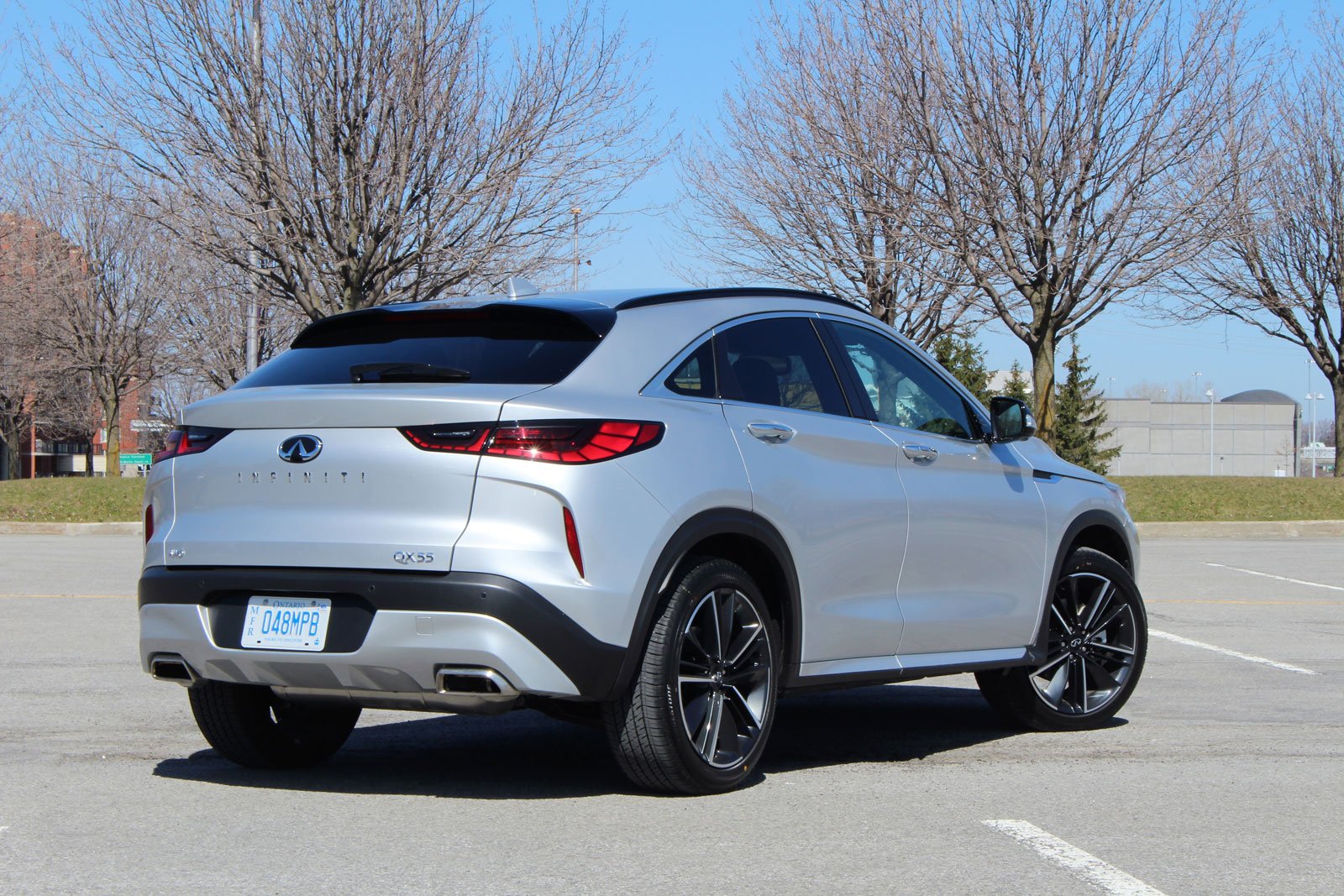 The 2022 Infiniti QX55 mainly competes against the Range Rover Evoque, the Lexus NX F Sport, the Lexus RX F Sport and the Acura RDX A-Spec, according to the company, although it did name the Audi Q5 Sportback, BMW X4 and Mercedes-Benz GLC Coupe as secondary rivals.

The QX55 rides on the same platform as the Infiniti QX50 compact utility vehicle, and shares its powertrain as well. The VC-Turbo 2.0L four-cylinder engine boasts a variable compression ratio for a Jekyll and Hyde approach, being either as fuel-efficient or as responsive as possible depending on the driver’s throttle input. The trick engine develops 268 horsepower and 280 pound-feet of torque, and it’s managed by a continuously variable automatic transmission that simulates gear changes during hard acceleration. 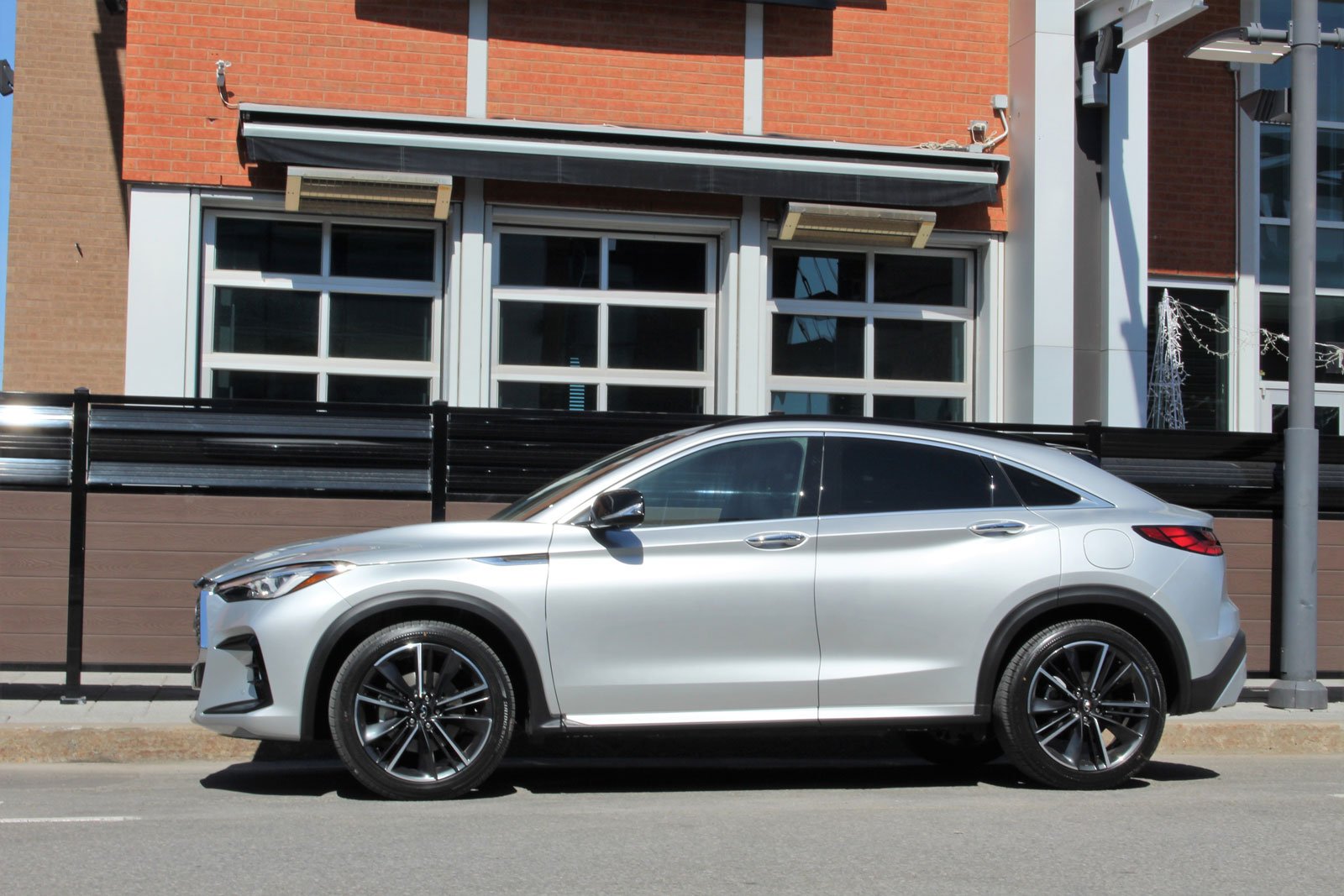 Once we get used to the throttle delay while the vehicle pulls away, the 2022 Infiniti QX55 is pretty quick, in the same vein as its turbo 2.0L competition, and all-wheel drive is standard in both the United States and Canada. A Sport mode livens the driveline up a little, while the Eco mode stiffens the gas pedal, as if that will help us save fuel, but just becomes mildly irritating instead. There are also simulated engine sounds sent through the cabin, resembling the growl of a six-cylinder lump: diehard gearheads will likely be offended, the other 97% of buyers likely won’t mind or will even find it amusing.

City/highway/combined fuel economy is rated at 28/28/25 mpg in the U.S. and at 10.5/8.3/9.5 L/100 km in Canada, which is certainly in line with its competitors when equipped with their turbocharged four-cylinder engines. We managed 24 mpg or 9.9 L/100 km during our brief first drive. However, like in the QX50, the VC-Turbo engine’s innovative technology doesn’t make it more efficient than what’s found in other segment models. 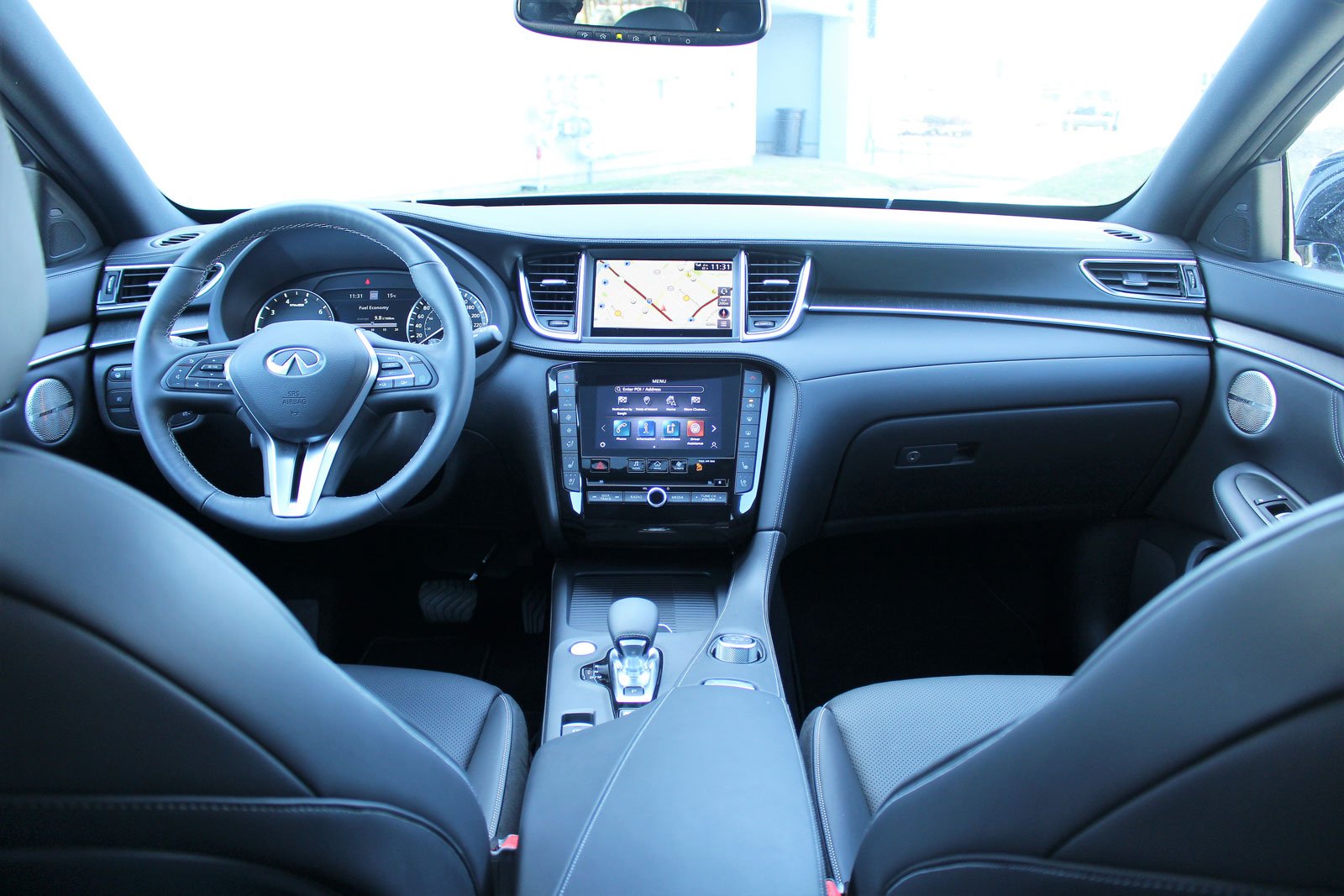 The QX55’s ride is most impressive, as it soaks up road imperfections with ease, despite the crossover wearing standard 20-inch wheels wrapped in 255/45R20 rubber, and not having a fancy adjustable suspension like some of its rivals do. It’s simple, and it works wonderfully. As for the variable-assist steering, there is a small difference in feel when the Sport mode is activated, although it ultimately doesn’t make the vehicle more dynamic.

Don’t look for an equivalent of the Audi Sport, BMW M and Mercedes-AMG models at Infiniti, because there isn’t one. There’s a single engine choice, and it’s the one most segment buyers would go for anyway, so Infiniti doesn’t see this as a big problem, and neither do we. 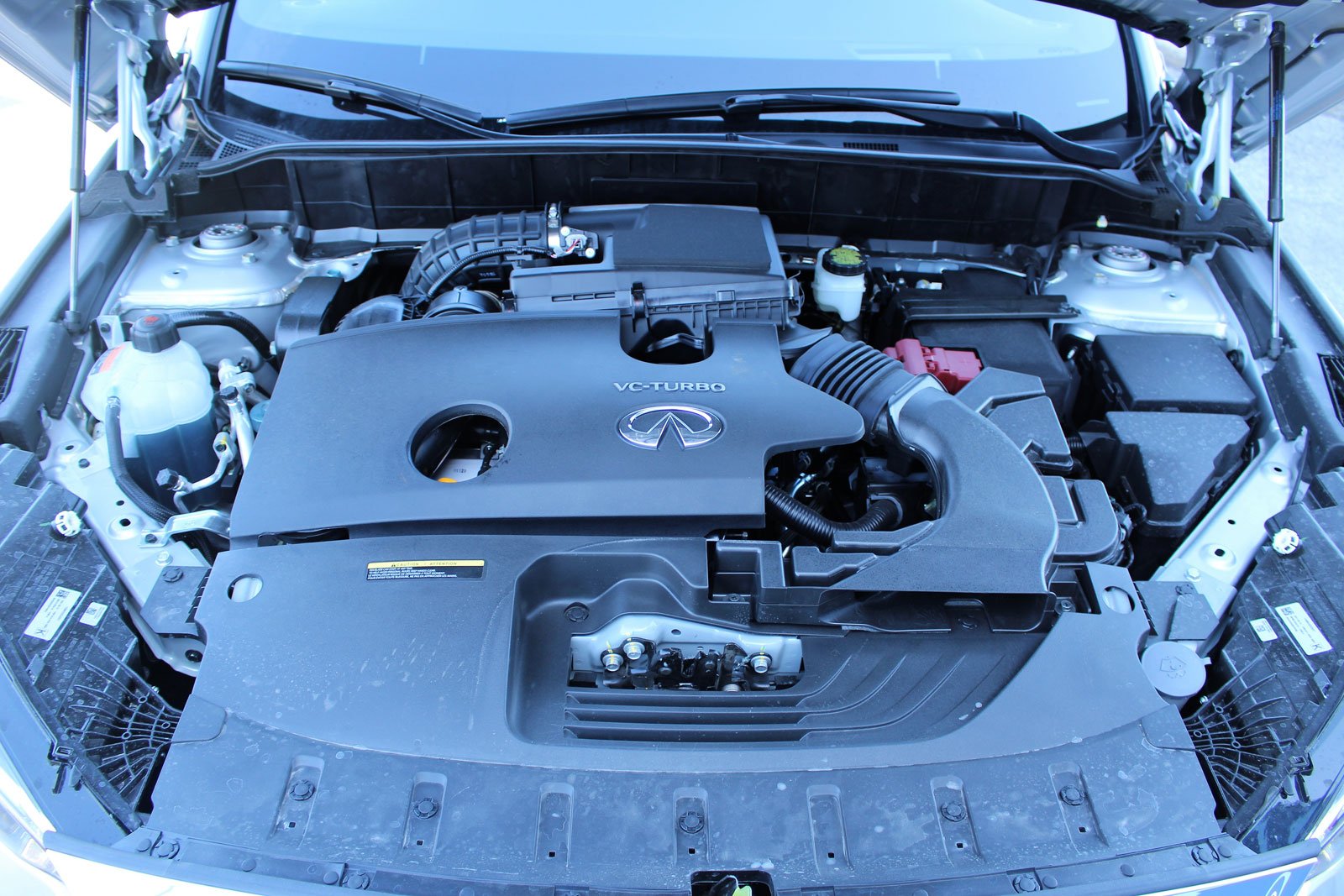 The 2022 Infiniti QX55’s design is similar to the QX50, but differs just enough that one might think they’re not so closely related. The front end boasts a unique grille with a sportier looking mesh as well as a more aggressive bumper, while the roofline plunges at the rear and the license plate was moved from the liftgate to the bumper, giving the vehicle a cleaner and more athletic stance. The brand’s designers pointed out that there are 45 LED elements in each of the very detailed taillights. The look is completed with a pair of bright exhaust outlets surrounded by a body-color bumper, while the QX50 gets a silver garnish. Yes, there are shades of the FX here—which eventually became the QX70—especially in the shape of the side windows, but the QX55 also has its own styling cues.

The QX55 is offered in three trim levels, while the QX50 has five, as the crossover coupe foregoes its counterpart’s PURE and range-topping AUTOGRAPH variants. Inside, fit and finish is beyond reproach, and the execution is what we expect from the Japanese brand after sampling its other recent products. The entry-level LUXE and mid-range ESSENTIAL gets aluminum accenting and either leatherette or genuine leather seating, while the SENSORY trim boasts open-pore wood accents and semi-aniline cowhide. 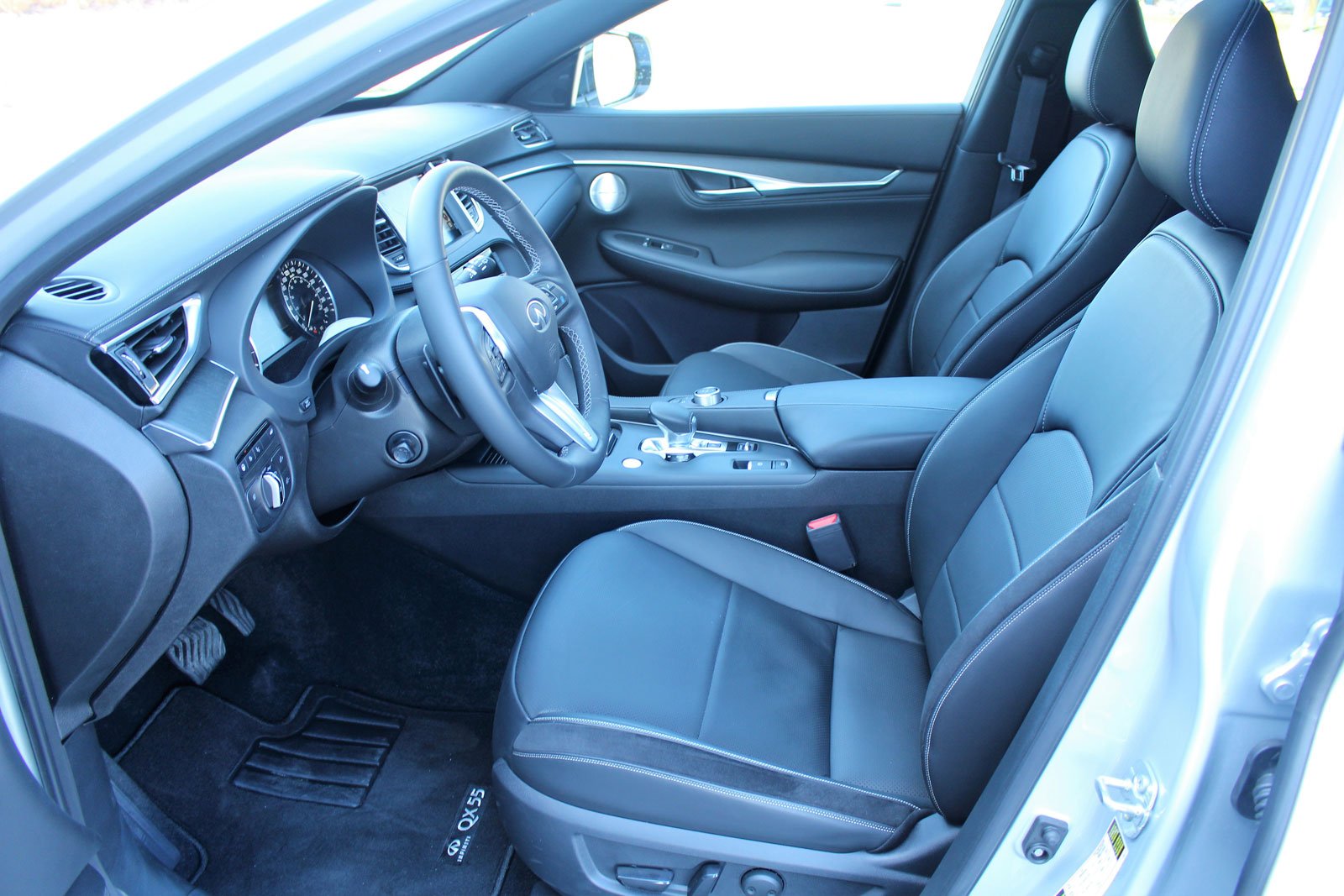 Curiously, or disappointingly, just like in the QX50, there are no heated rear seats in the 2022 Infiniti QX55, although heated front seats are included across the board, and ventilation is included in the SENSORY trim, along with other features like tri-zone climate control, ambient lighting and ProPilot Assist, just to name a few. The Bose 16-speaker sound system is excellent, and although the Infiniti InTouch infotainment system works fairly well, it’s starting to feel really old, despite the convenience of two separate screens. At least there are still physical buttons to fiddle with the climate control system. 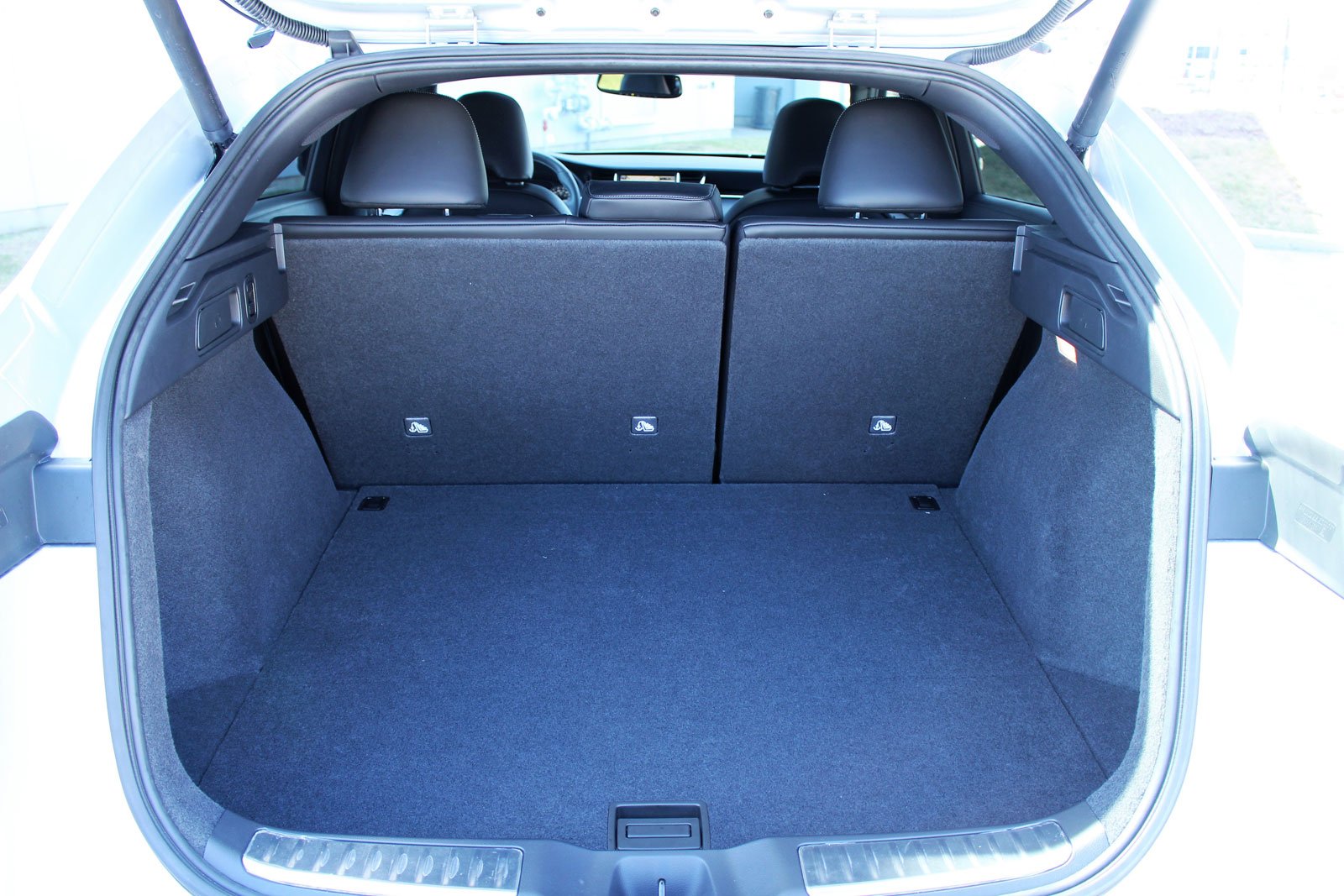 Although the brand claims the 2022 Infiniti QX55 is a modern take on the FX crossover, the latter was a much sportier machine, and a more direct competitor to the Bavarian utility vehicles, especially in their higher-performance trims. We should think of the QX55 as a more docile, comfortable crossover coupe for the everyday drive, which doesn’t mean it can’t hold its own on a twisty mountain road. For those who appreciate the design and don’t need a road-carving vehicle, this new Infiniti should suit them just fine.

Patrick Nadeau, From Disraeli (QC), drove from his home to Mexico and back. His car is a Hyundai IONIQ 5 Long Range RWD. ...
Read more
Previous articleSlammed Tiguan Latest in Volkswagen Enthusiast Fleet
Next article2021 Mercedes-AMG A 35 Hatch Review: The AMG Hot Hatch For Canada