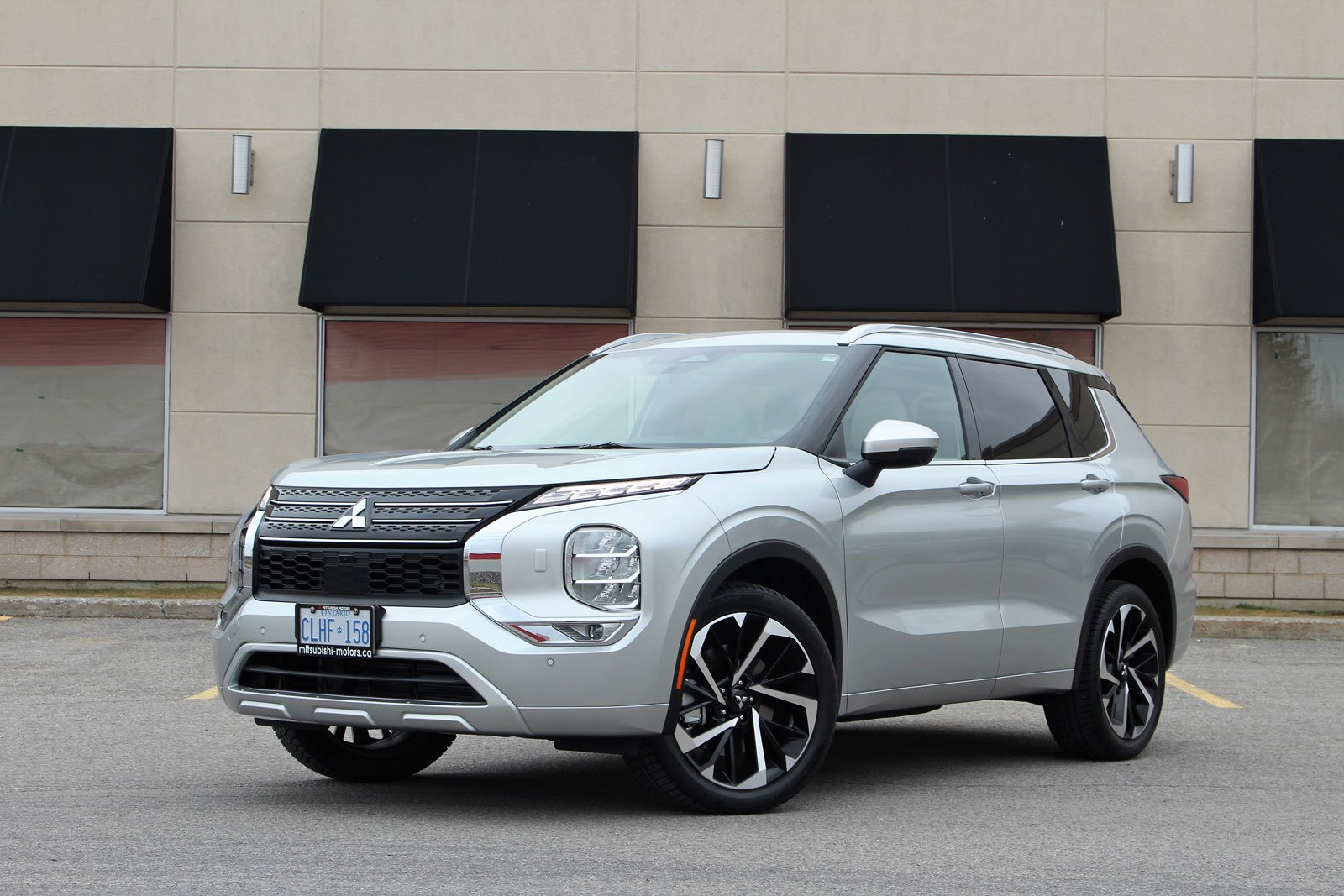 The 2022 Mitsubishi Outlander has been redesigned from head to toe, and although it may not redefine the compact crossover segment, it certainly redefines the Mitsubishi brand itself.

The fourth-generation Outlander boasts an all-new exterior design, a totally different powertrain and more modern technology. It’s also Mitsubishi’s first product in North America to have been developed through the Renault-Nissan-Mitsubishi alliance, though many aspects of this crossover are still unique to the Japanese brand. 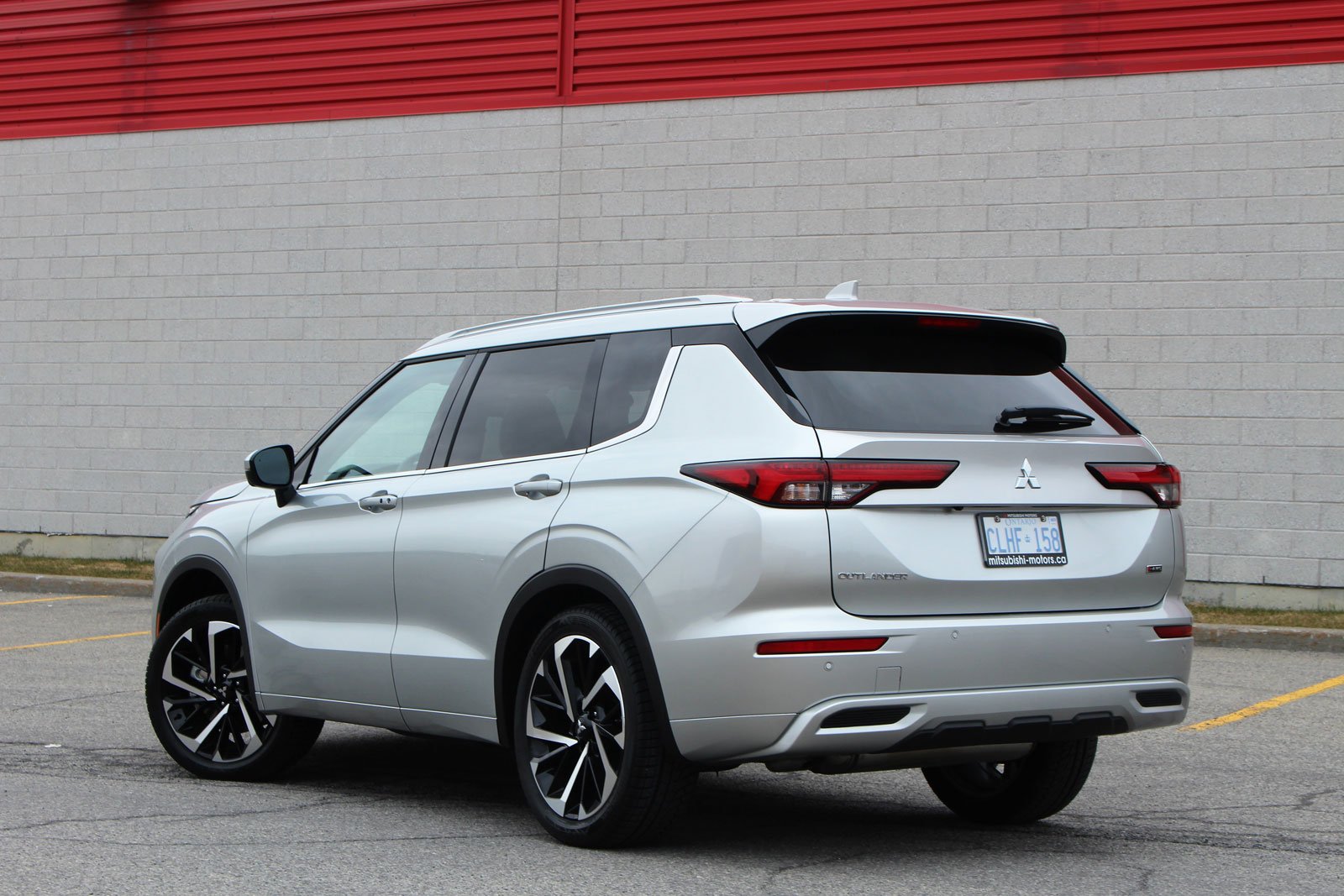 Since the 2022 Mitsubishi Outlander and the also-new 2021 Nissan Rogue share the same platform and powertrain, it would be easy to dismiss one of these models as a clone of the other. However, the company points out that it contributed to the development of these two crossovers’ architecture, and didn’t simply borrow it.

For the consumer, all this is irrelevant. What’s important to know is that the new Outlander is a much better vehicle than its predecessor, starting with the engine. The naturally aspirated 2.5L inline-four produces 181 horsepower and 181 pound-feet of torque, managed by a continuously variable automatic transmission. In addition to being smoother and more powerful than the old Outlander’s 2.4L engine, it’s quieter too. The four-cylinder engine is up to the task of getting the vehicle swiftly up to speed, despite a weight gain of more or less 135 kilograms or 300 pounds compared to the previous-generation Outlander as well as the 2021 Rogue, which uses the same powertrain. 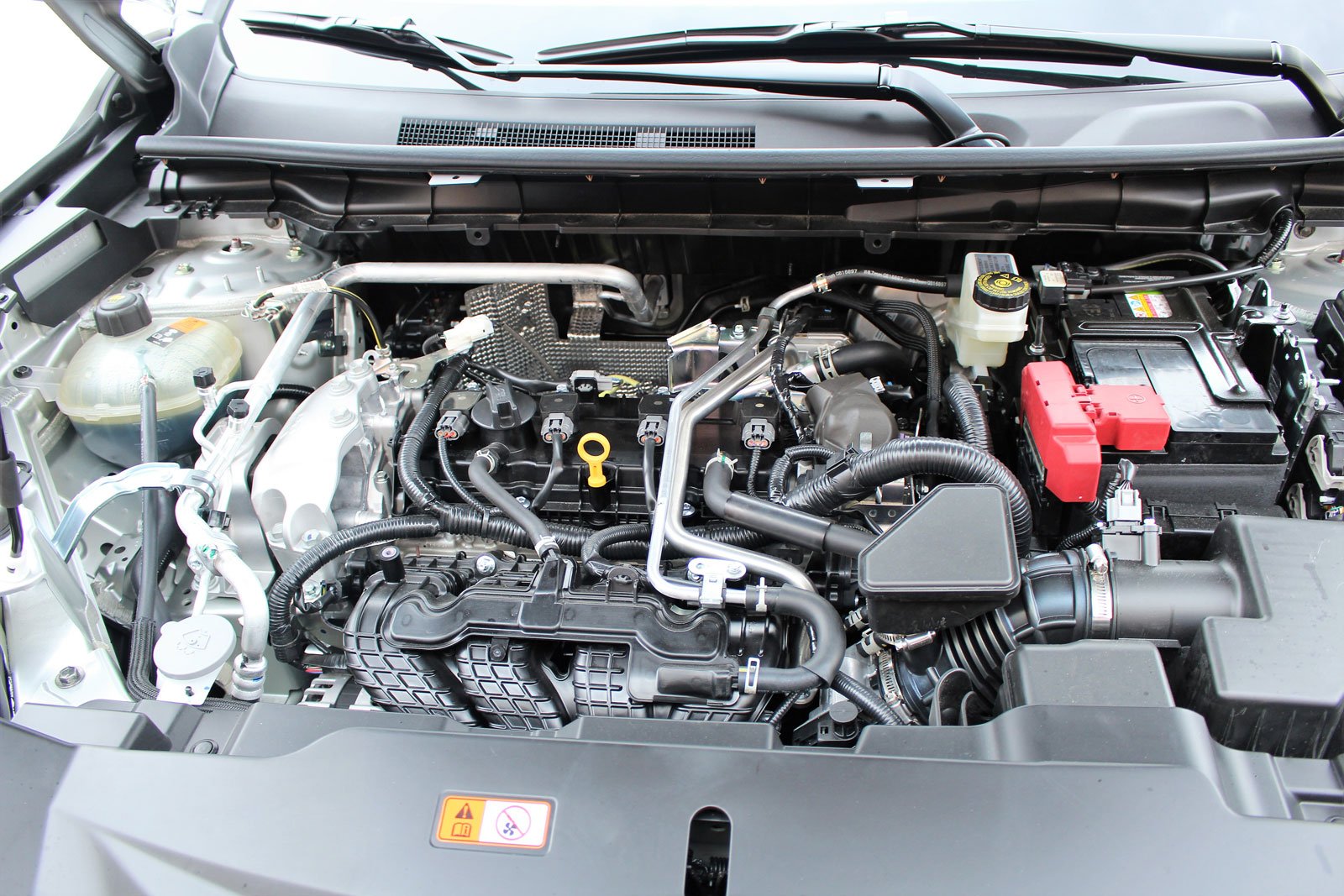 The 3.0L V6 is gone. It produced 224 horsepower and 215 pound-feet of torque, but its big advantage was that it rose the Outlander’s towing capacity from 1,500 to 3,500 pounds (680 to 1,588 kg). Before the Outlander PHEV came along, the take rate for the V6 engine was about 32%, according to Mitsubishi. That’s an unusual figure, as usually, a very small percentage of compact crossover buyers choose the more powerful engine choice. In any case, for those who need to tow a heavier load, segment shoppers will have to turn to the Ford Escape with its turbo 2.0L engine, or the Jeep Cherokee and its 3.2L V6, but at least the new Outlander’s capacity is now set at 2,000 pounds (907 kg).

We’ll also note here that the redesigned 2022 Mitsubishi Outlander doesn’t offer the company’s plug-in hybrid powertrain. It should arrive for the 2023 model year, and in the meantime, the previous-generation, 2021 Outlander PHEV is still available with a bigger gasoline engine and a slightly larger battery pack. The latter makes a big difference in the U.S. market, as the Mitsu now qualifies for a bigger green-vehicle tax credit. 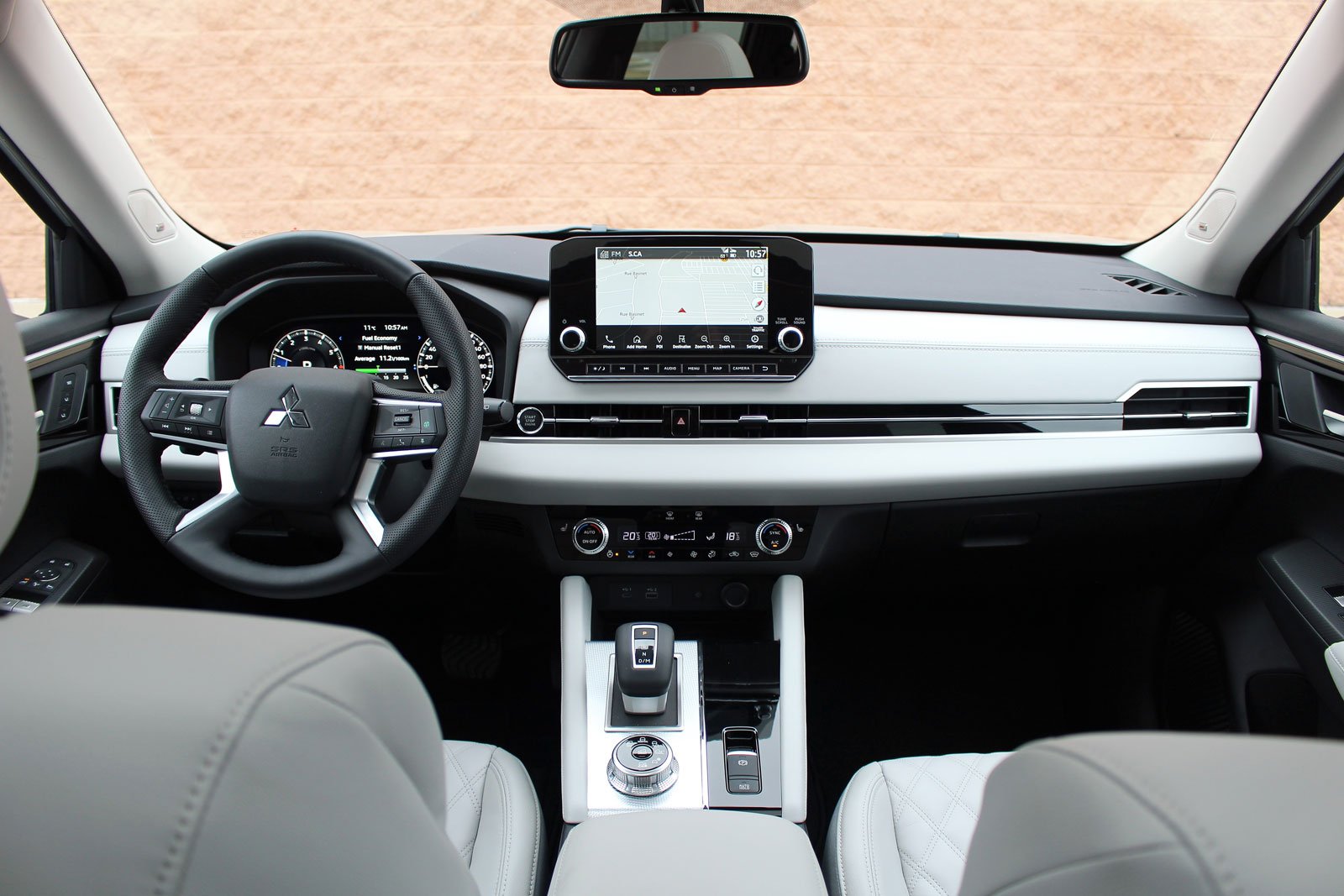 Back to the new Outlander. With AWD and the 2.5L engine, the combined EPA fuel economy figure of 26 mpg is the same as with the previous generation and its 2.4L mill. In Canada, the number actually drops from 9.1 L/100 km to 8.9 L/100 km on the combined city/highway cycle. However, the vehicle is bigger and more equipped, which explains the weight gain. So maintaining similar fuel economy figures can be considered a good thing, even though the Honda CR-V and the Subaru Forester are more efficient.

The Super All-Wheel Control (S-AWC) system is still on board in the new Outlander, and this Mitsubishi-developed all-wheel drivetrain is pretty sophisticated. Not only can it quickly shift power from the front to the rear wheels when slippage occurs, but it can also vary power to each of the individual wheels, which benefits both handling characteristics during spirited driving, and traction on slippery surfaces. There was only a trace of snow on the ground when we got to drive the 2022 Outlander, but we sampled S-AWC in many other Mitsubishi models, and it’s one of the better systems out there. 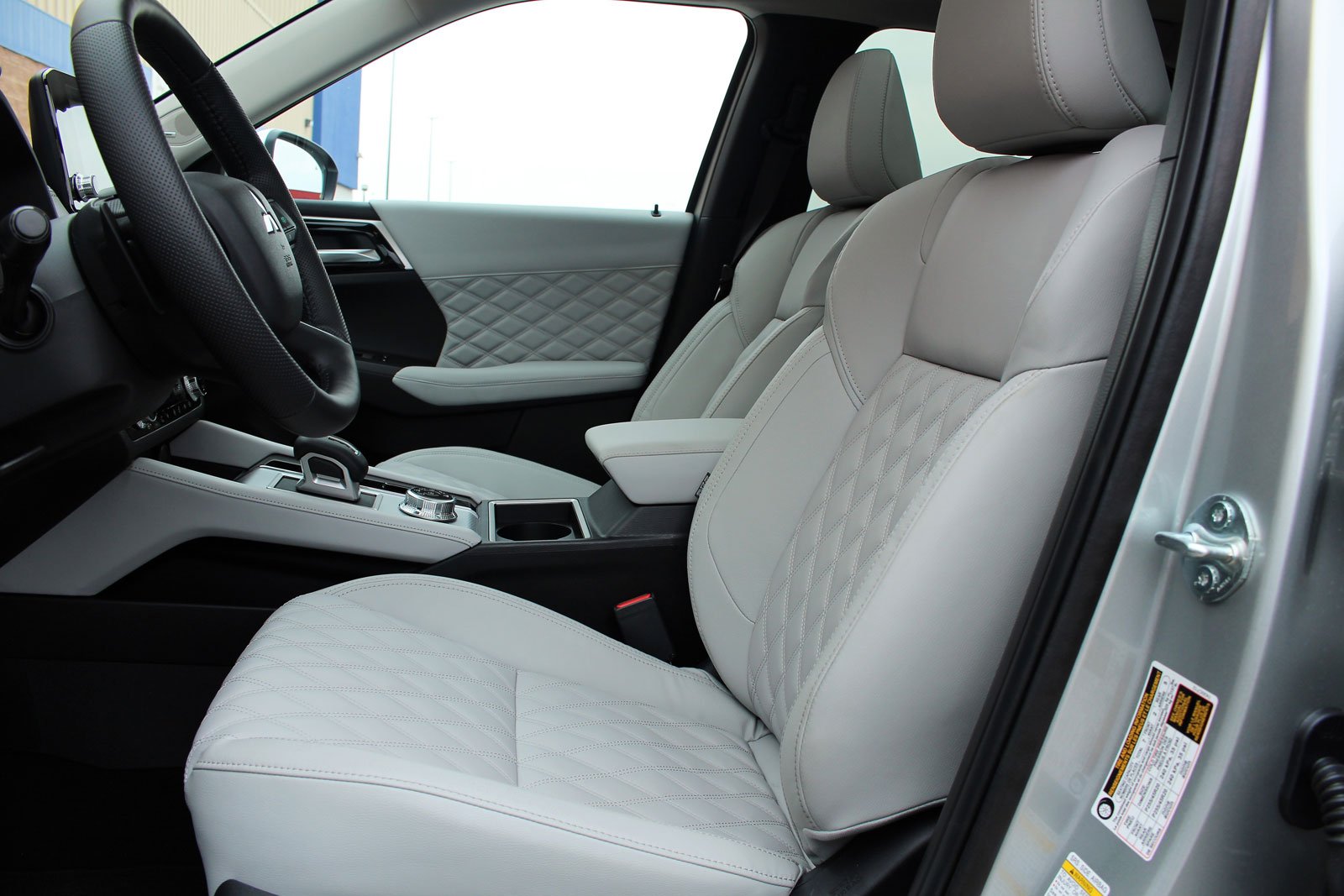 The 2022 Mitsubishi Outlander also has unique steering and suspension settings, for those who by now are still thinking it’s a Rogue in different clothing. Steering feel has improved considerably compared to the outgoing generation, the ride quality is excellent and only the nastiest bumps and road imperfections send jolts and noise up into the cabin.

Our test vehicle was equipped with 20-inch wheels wrapped in P255/45R20 rubber, a rarity in the compact crossover segment. We’re willing to bet the 18-inch wheels and P235/60R18 tires featured on the lower trim levels further improve ride quality, in addition to obviously being less costly when the time comes to replace the tires or fit the vehicle with winter rubber.

New for 2022 is a drive system with up to six modes, with Normal, Eco, Tarmac (for sporty driving), Gravel, Snow and Mud (AWD models only) settings to choose from. Each one fiddles with the vehicle’s throttle and transmission response, the S-AWC system, the Active Yaw Control, the Active Stability Control, the Traction Control Logic and the electric-assist power steering. A lot of work has been put into this system, and very few people will likely use it on a regular basis, let alone feel the differences between half of these modes. But they’re there in case we need them.

From a design standpoint, the 2022 Mitsubishi Outlander’s fat-cheeked front-end styling and broad stance give it a more athletic and muscular appearance. Compared to the previous generation, the new Outlander grows slightly in every exterior dimension, although the much wider front and rear track also contribute to its brawnier look. 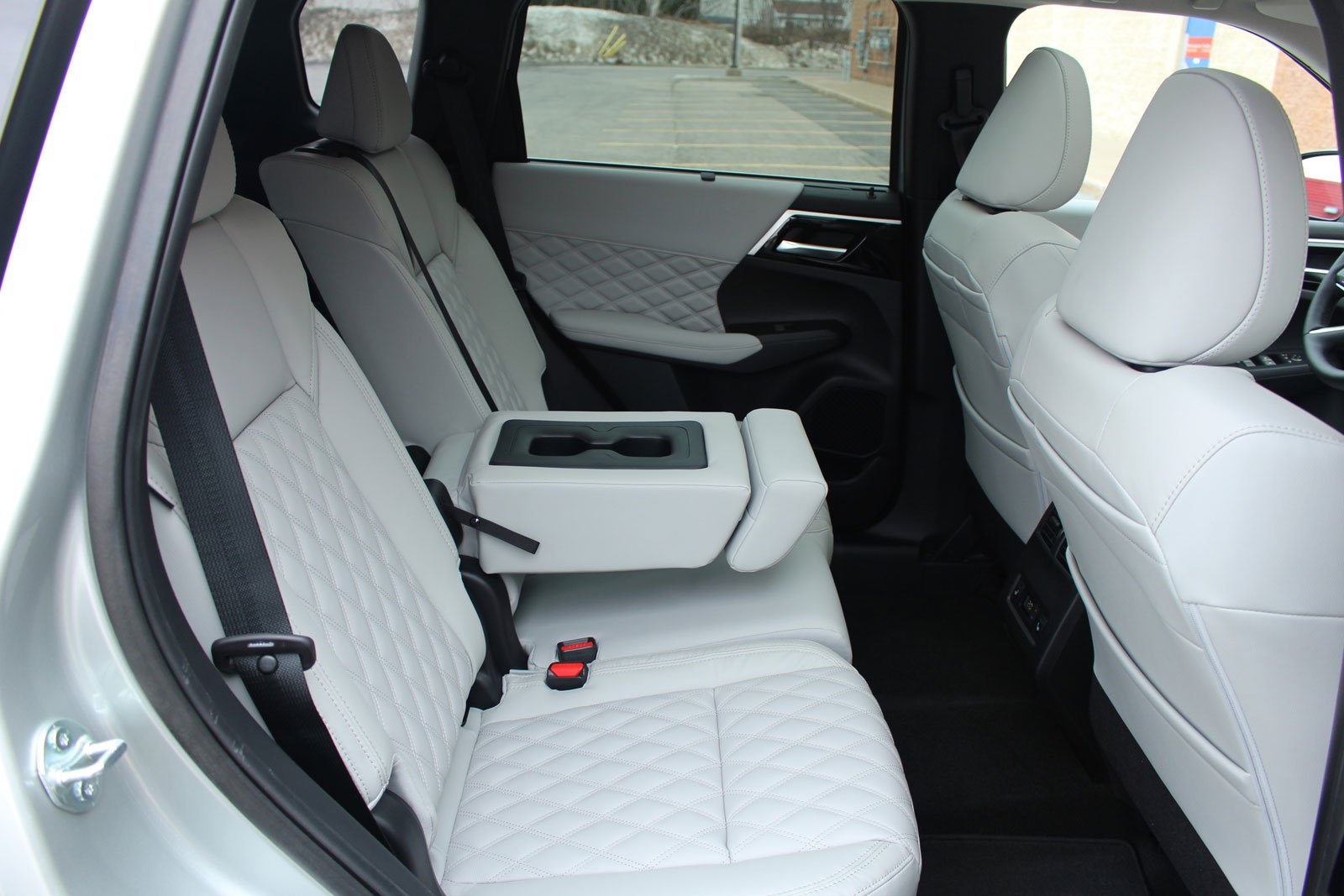 The new Outlander’s redesigned cabin is one of the most impressive areas. The design is much more modern and elegant, even luxurious the range-topping trim we tested, which benefits from wrapped dash and centre console as well as diamond-quilted leather on the seats and door panels. The overall appearance is clean and uncluttered, with just the right amount of bright trim, and maybe a little too many piano black surfaces.

Here’s where consumers familiar with recent Nissan products might see some resemblances. The floating infotainment touchscreen and some switchgear are shared with the Rogue, which isn’t to say that’s a bad thing. The biggest design flaw is a massive array of empty buttons on the left side of the Outlander’s steering wheel, which looks like we cheapened out on the options, even though we’re driving the most-equipped version of the crossover. Oh well. 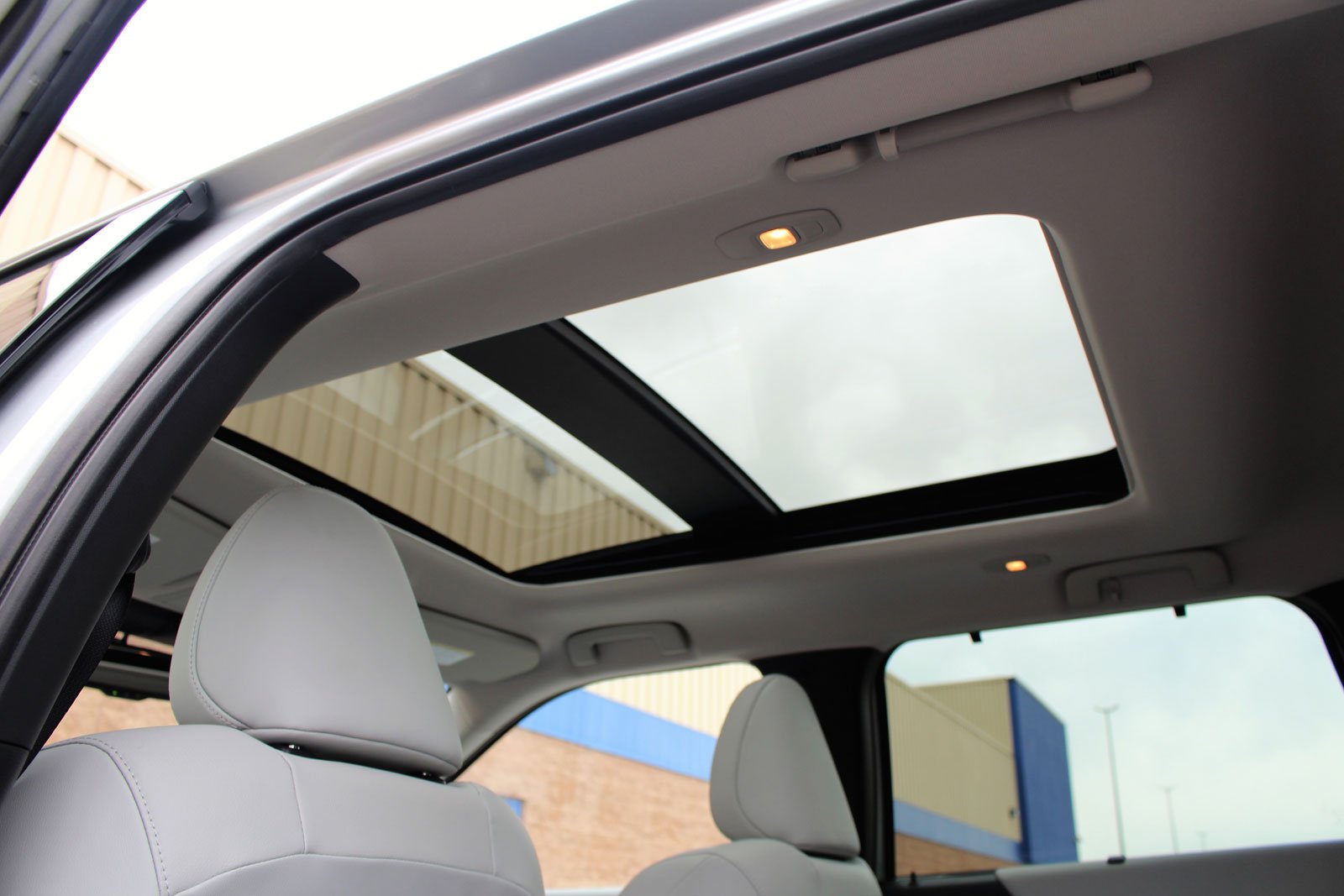 One thing that hasn’t changed compared to the old Outlander is third-row seat space and access. Climbing in and out is a challenge, and there’s just no clearance under the second-row bench for our feet. That second row can slide forward, which helps, but then everyone will be complaining about the lack of legroom. Kids old enough to climb in and buckle up by themselves probably won’t mind, though. The third-row headrests must be removed before folding the seats down, but they can be stored in the underfloor bin, along with the retractable cargo cover.

The 2022 Mitsubishi Outlander gets a technological shot in the arm, with an available 12.3-inch fully digital driver instrument panel, an eight- or nine-inch infotainment screen, a 360-degree camera system and the usual bevy of advanced safety features like adaptive cruise control, autonomous emergency braking with pedestrian detection, blind-spot monitoring, lane keep assist and so forth—many of which are standard across the board. There’s also the new MI-PILOT Assist semi-autonomous drive system, which bundles a stop and go cruise control function that reduces stress and fatigue in dense traffic. 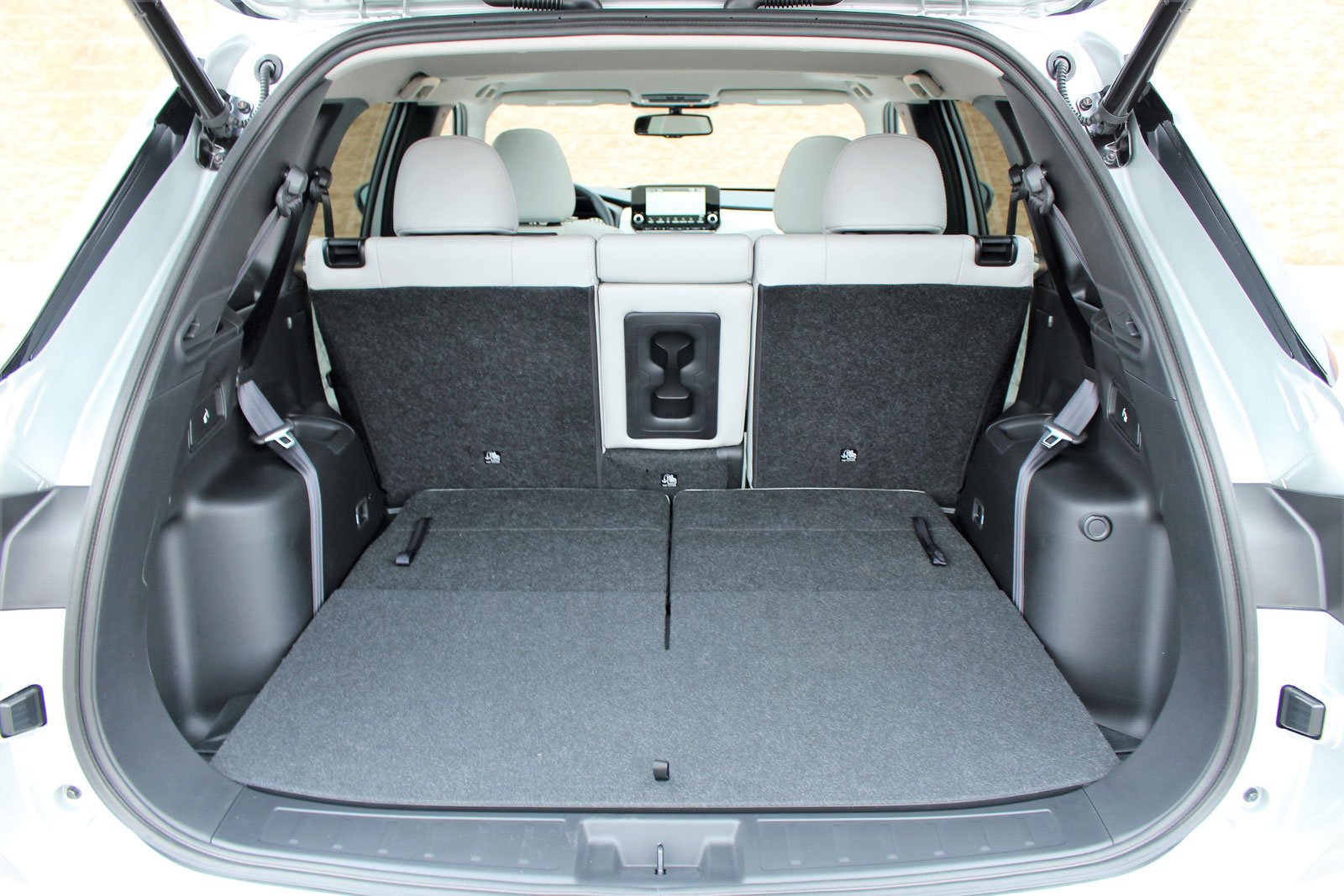 There are other thoughtful touches to be found in and on the new Outlander as well, such as rear-door sunshades, a windshield wiper de-icer, and the washer fluid nozzles are integrated into the wiper arms for increased effectiveness and less fluid waste. We’re anxious to try this out during a salty, slushy Canadian winter day.

The 2022 Mitsubishi Outlander has improved in almost every way imaginable, and remains somewhat of a good value as well. In the U.S., pricing ranges from $25,795 to $36,445 before freight and delivery charges, while a limited-run SE Launch Edition offers stuff like a power panoramic sunroof, a Bose sound system, the digital driver instrument panel and some unique styling touches at an appealing MSRP ($30,990 or $32,790 with S-AWC). 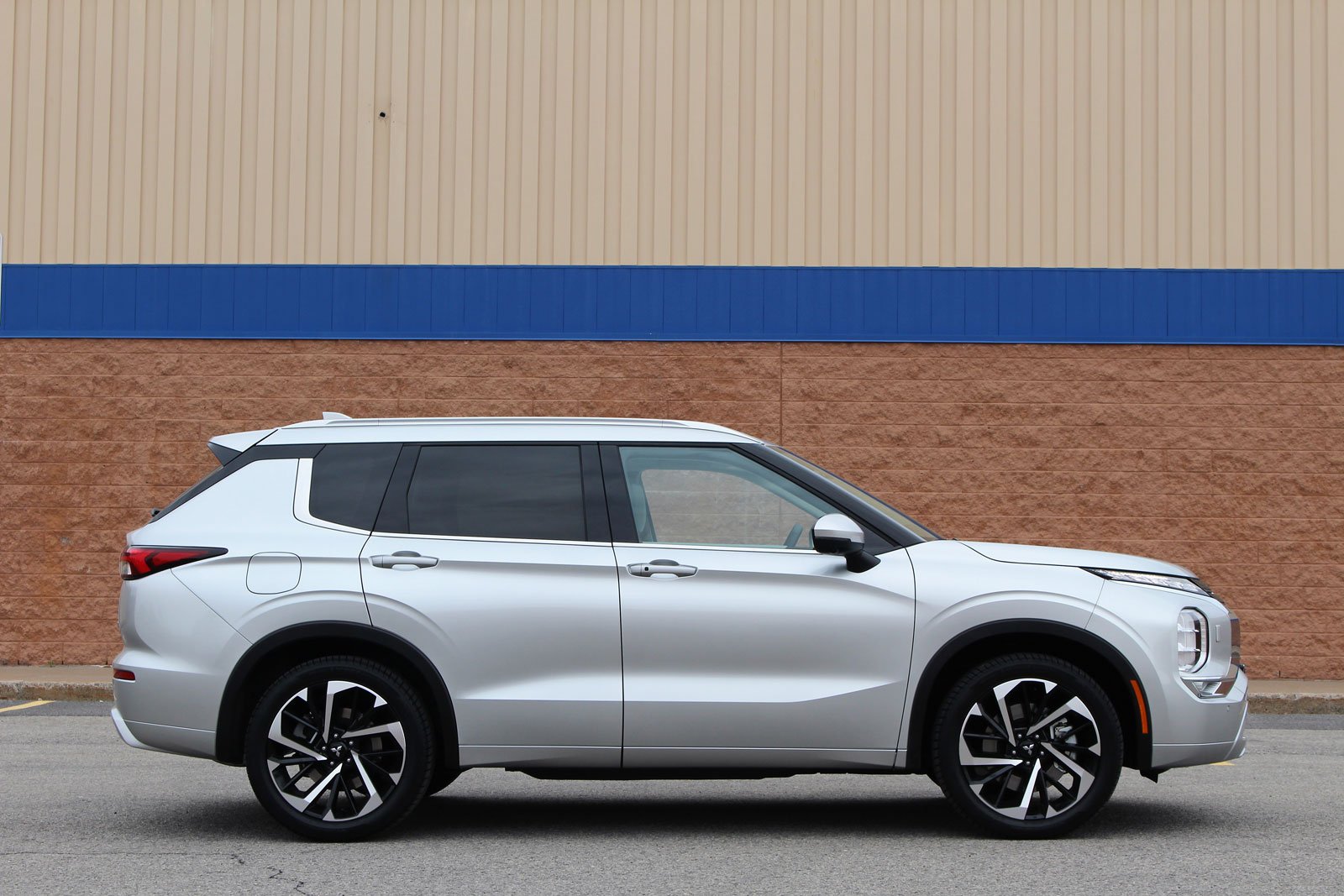 Meanwhile in Canada where S-AWC comes standard, the Outlander ranges from $31,998 to $42,178 before freight and delivery charges. The brand believes the mid-range, $37,738 LE is the screaming deal with 20-inch wheels, navigation, the 360-degree camera system and the nine-inch touchscreen, but we think the $34,648 SE trim with its power liftgate, panoramic sunroof, heated steering wheel and three-zone climate control will do the trick as well.

Stylish inside and out, versatile and capable, technologically up to date, the 2022 Mitsubishi Outlander has what it takes to stand out in the compact crossover segment, and benefits from excellent warranty coverage as well. It may not send the competition to the drawing boards, but it most certainly deserves the attention of shoppers in need of a practical and well-equipped family vehicle, and ushers in a new dawn for the Mitsubishi brand in North America.