We take the new Porsche 911 GTS for a spin, this time on our less-than-perfect roads.

In the world of Porsche, GTS represents the finest possible line between track-ready performance and everyday usability. Porsche GTS models include features designed to enhance cornering and overall sharpness, but without pushing the envelope so far that the vehicle is no longer enjoyable to drive to work or on quick weekend getaways. The all-new Porsche 911 GTS is no different and sits squarely between the Porsche 911 Carrera 4S and the Porsche 911 GT3 in terms of how it feels and behaves. 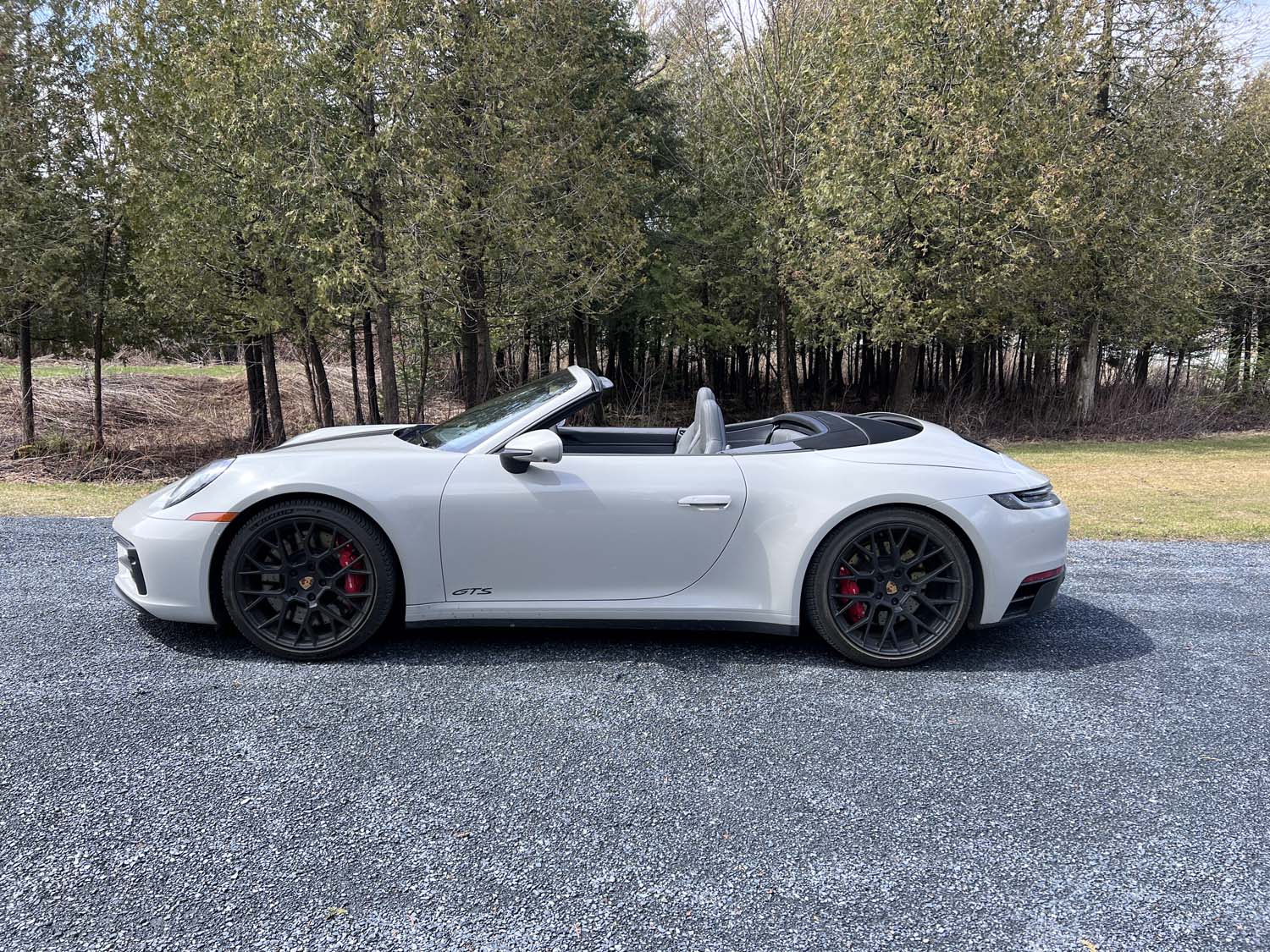 It’s a more dialed-in and focused track performer than the Carrera S, but it is a lot more user-friendly than a GT3. I was able to confirm this delicate balance the 911 GTS achieves so well by driving it here on Quebec roads where potholes, uneven surfaces, and cracks abound everywhere. My first contact with the 911 GTS’ latest generation came this summer in Atlanta where the roads are much more appropriate for a high-performance vehicle. Still, even on some of the worst roads you can find in North America, the 911 GTS proved to be a very worthy daily driver and certainly held onto its spot as my personal favorite 911. 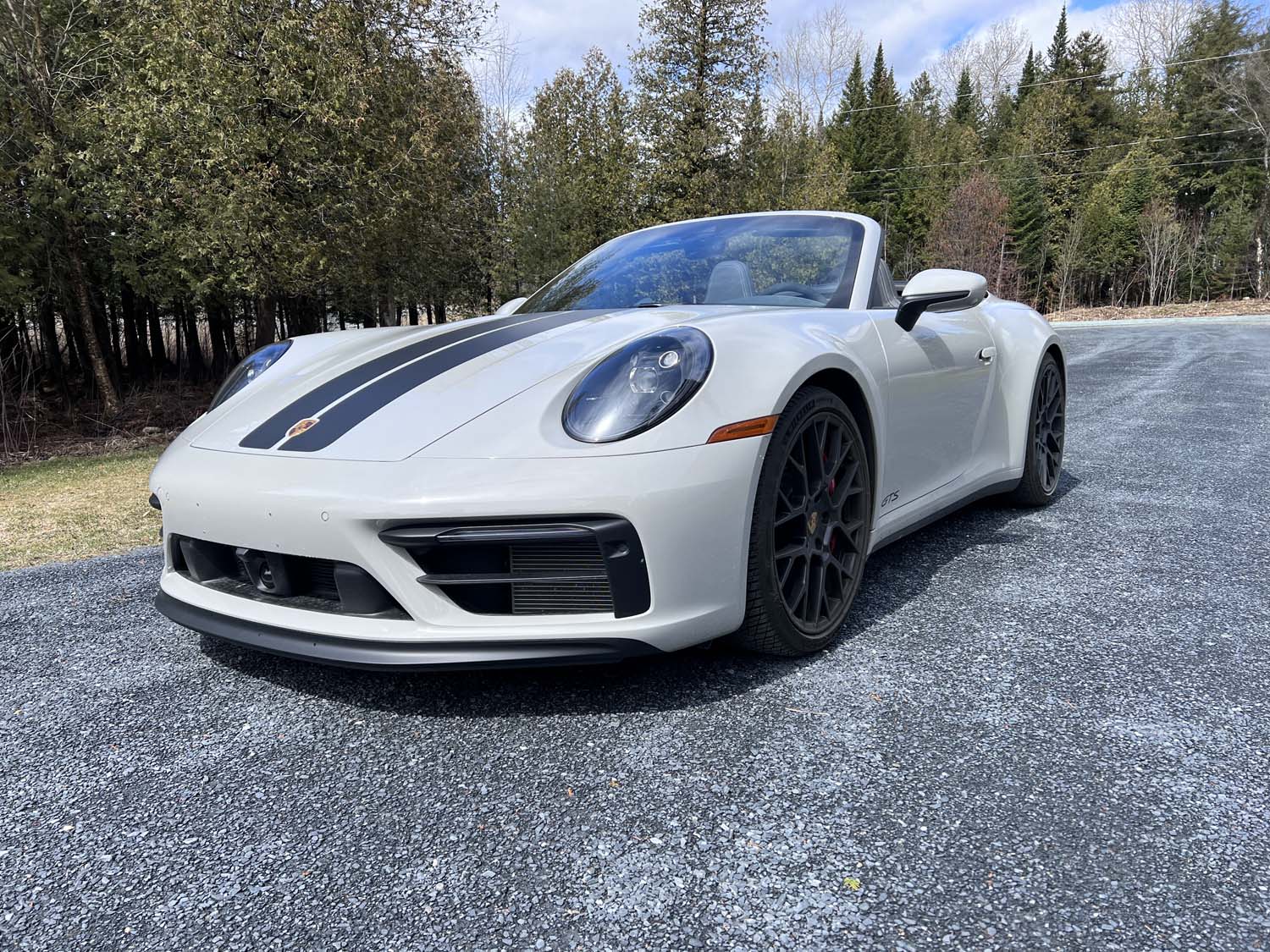 That isn’t to say that it is perfect. It certainly is an expensive proposition with a starting price of over $175,000. For the casual Porsche 911 enthusiast, a lot of the extra goodies that are added onto the GTS and that focus mainly on its track performance aren’t necessary. There is a $20,000 premium attached to the GTS that you will not really see the value in if you don’t intend to take this on a closed circuit. It is also a bit edgier than the Carrera 4S, and although it certainly is one of the most refined and comfortable performance cars you can get in this price range, it might be a little too harsh for some.

And, although it loves carving corners on a track, the GTS doesn’t come close to some of the performance feats achieved by the GT3. So, while GTS fans will say it achieves the perfect balance of track readiness and daily usefulness, others may feel that it compromises in both areas when compared to the GT3 or the 911 Carrera S.

Given how popular the GTS has been over the years and given its stellar resale value that sits atop just about any 911 you can get your hands on, it would seem most consumers view the GTS’ tight rope ballet between sportiness and refinement in a positive light. 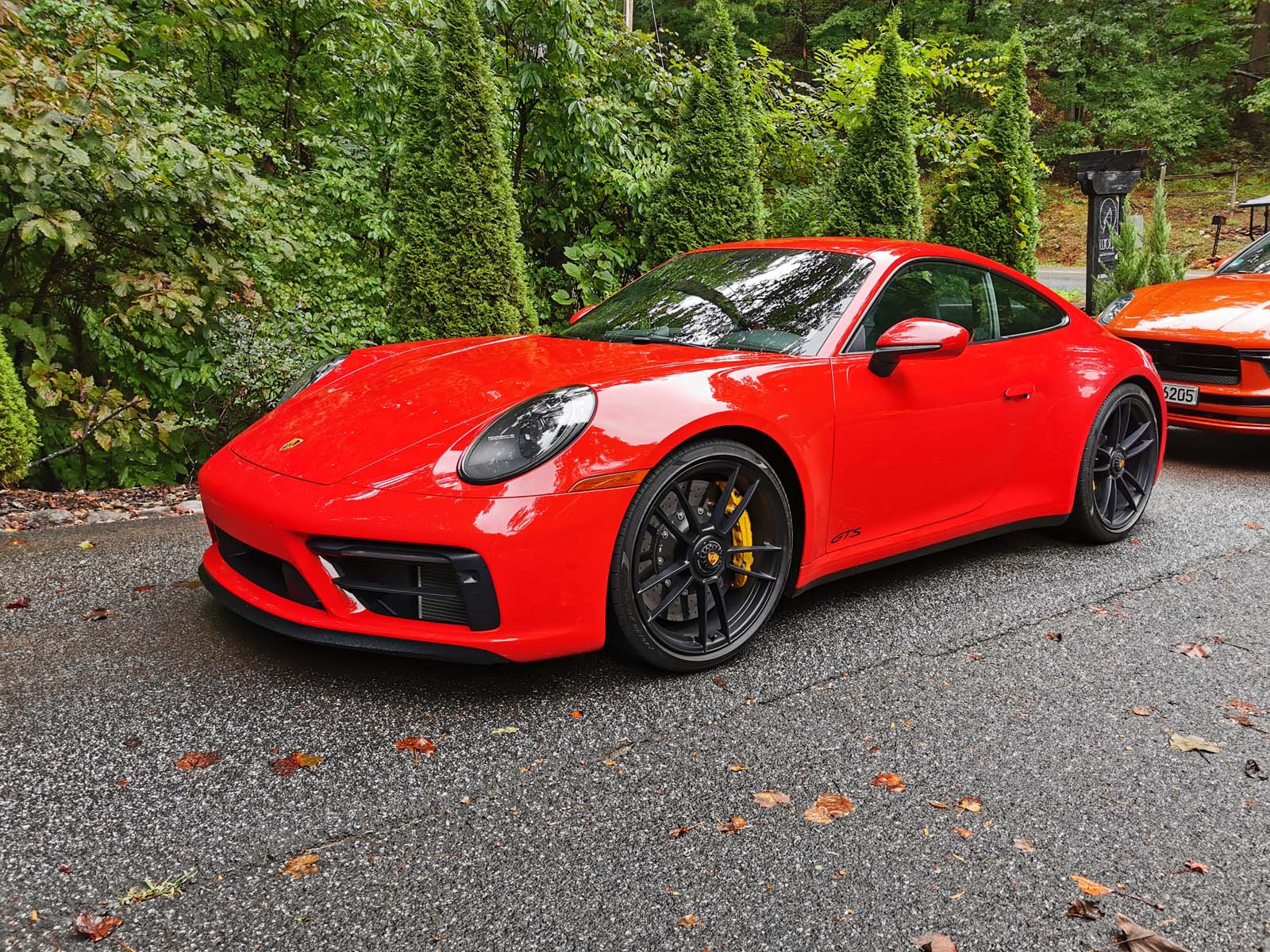 There is a very unique feeling that comes with driving the GTS and it all starts the second you turn the built-in key on the left side of the steering wheel. The grumble from the exhaust at start-up is different than any other 911 including a Carrera S with the sport exhaust system. Heading out on the road, you quickly feel just how tighter everything is and again, the exhaust reminds you of the special nature of this particular model. 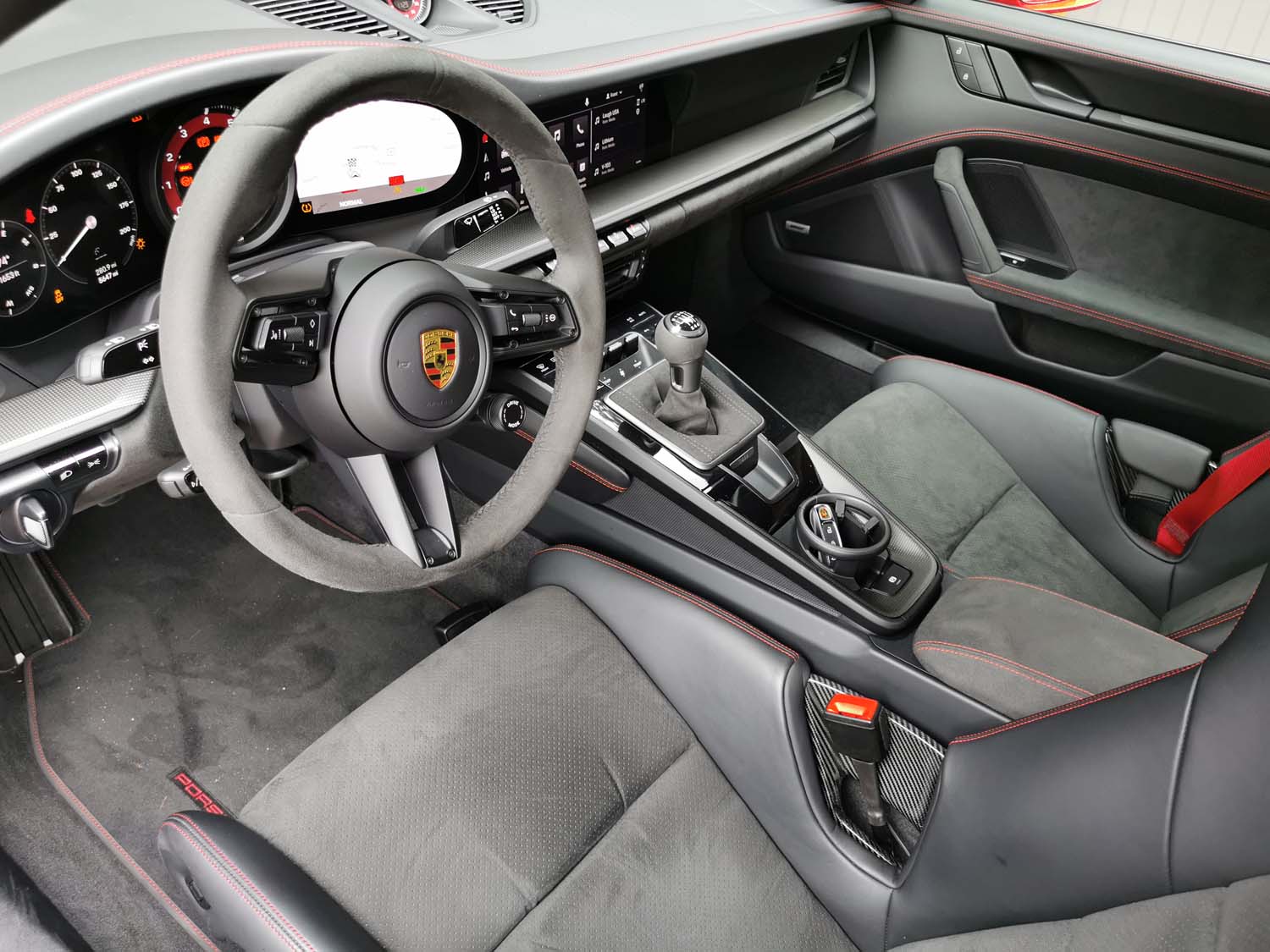 As the road opens up and you start to apply more pressure to the accelerator, the performance enhancements of the GTS become evident. The 3.0-litre twin-turbo flax-six powering the 911 GTS is shared with the Carrera S, but it is tuned to 473 hp and 420 pound-feet of torque courtesy of more boost pressure. That’s 30 extra horsepower compared to the Carrera S meaning that you reach 100 km/h 0.3 seconds sooner. That may not seem like a big deal, but overall, you definitely notice the increased performance provided by the GTS over the Carrera S. It’s louder, but it’s also quicker to react and it passes even more confidently. There’s more power across the entire rev range and the GTS just feels faster and sportier. 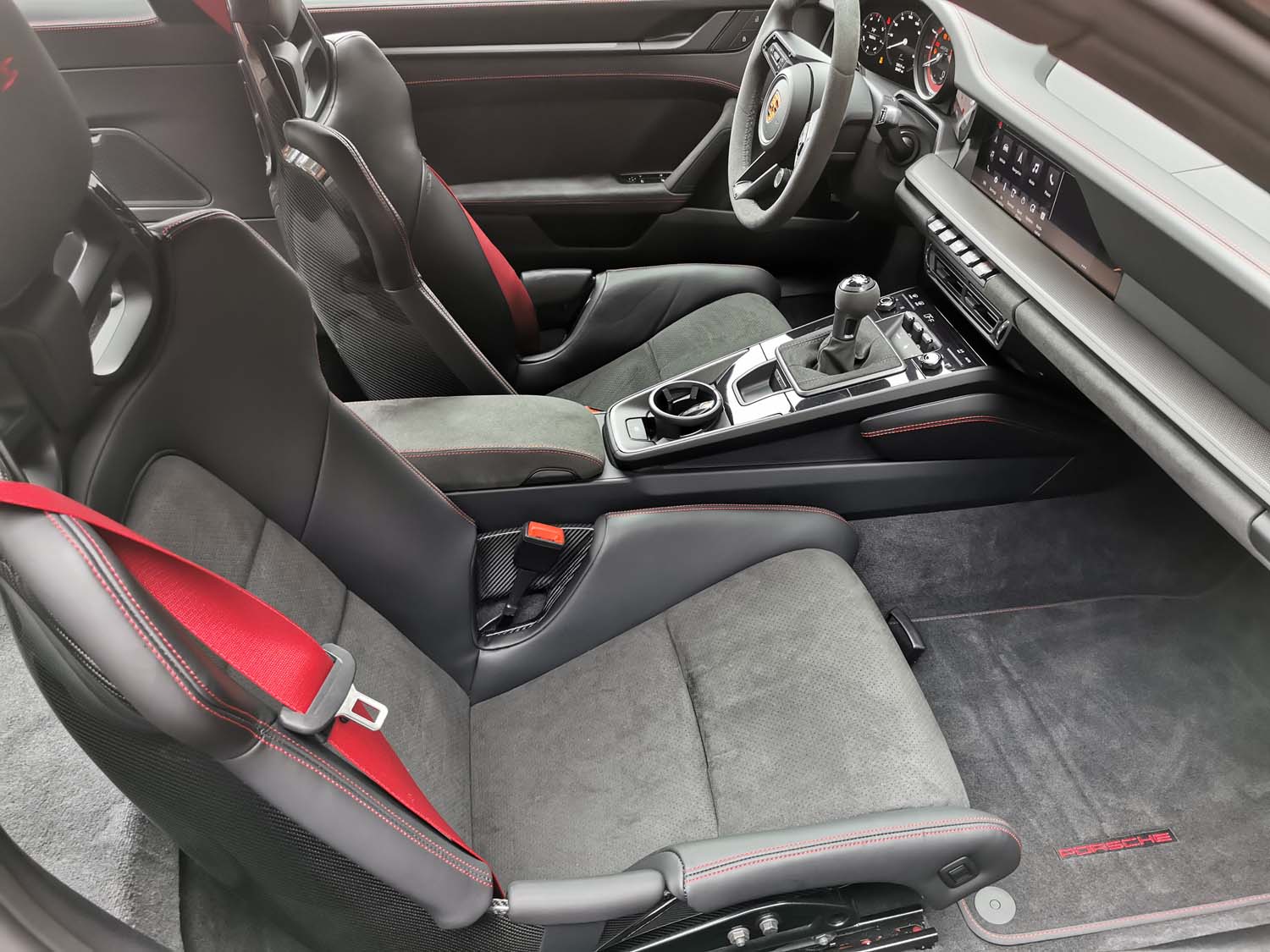 The GTS shares its braking system not with the GT3 but with the Porsche 911 Turbo. To be honest, every 911 I have driven in the last 10 years has blown me away with its stopping power, so it is difficult to say just how much better the GTS is at stopping than other 911 models, but the fact that it features the brakes of the most powerful 911 is noteworthy. It is also lower by 10 mm and it has all of the traditional GTS design elements such as the blacked-out rear vent, distinct blacked-out 19-inch wheels, and GTS logo on the bottom left side of the door. As with any Porsche, this can all be changed thanks to the most comprehensive options catalog in the business.

Back to the exhaust note, not only is it more aggressive but you also hear more of it because there is less sound deadening in the 911 GTS. The model I drove in Atlanta was a coupe and you could still hear the exhaust very well My tester this time was the convertible which with the top down leaves nothing between your ears and the large dual centre tips in the back. Enthusiasts can argue which performance cars sound better for hours on end, but if you want to have immediate nods of approval from everyone around the table, just bring up the 911 GTS. No other performance car in the world sounds like this. 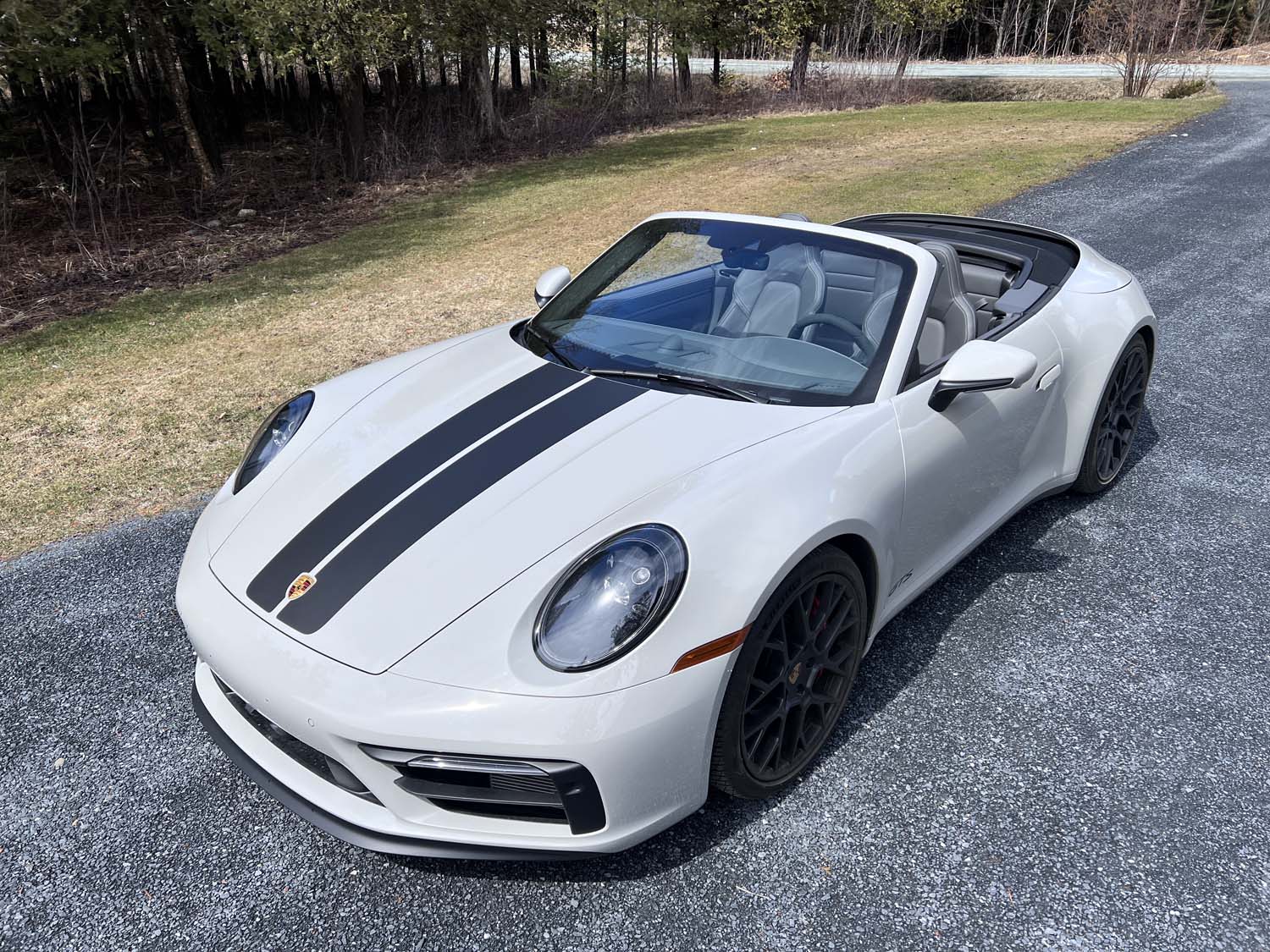 So how does it differ from a GT3 in terms of handling and performance? Well for starters it gets the standard 911 McPherson front suspension setup as opposed to the double wishbone suspension from the GT3. It also has less horsepower with the new GT3 producing 502 ponies. On the other hand, the GTS has more torque than the GT3. Driving around the city, the GTS is actually the quicker of the two. On a track as the revs rise, the GT3 definitely takes the upper hand and overall, the GT3 is the more engaging and the more agile of the two. Someone looking for the purest form of 911 track performance will feel held back in the GTS. 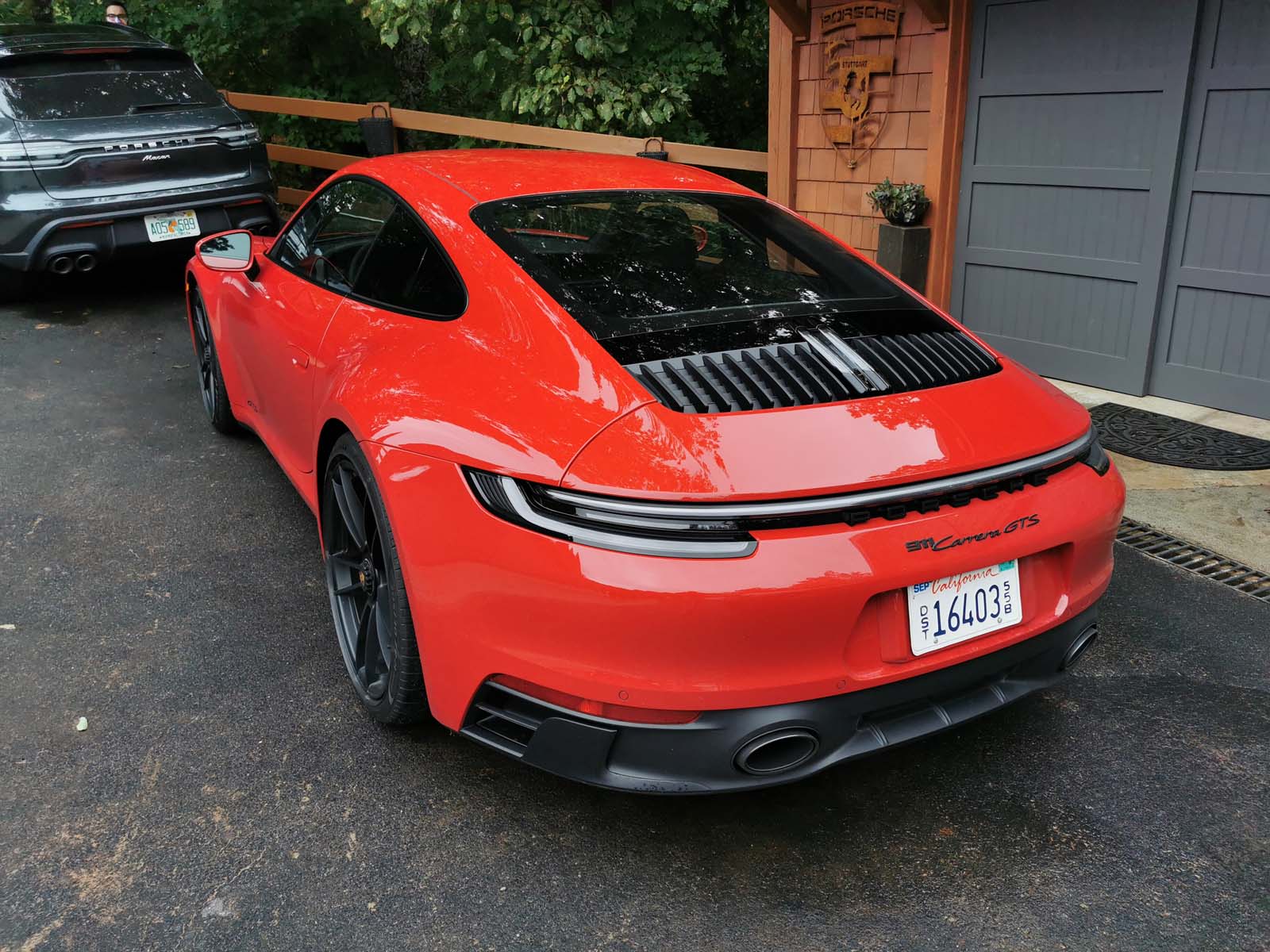 On the other hand, the all-wheel drive system available in the GTS gives the driver more confidence and the suspension and chassis, although not on GT3 levels, are still exceptional in their ability to communicate with the driver and provide instant control over where the GTS is headed. Very few cars in the world create such a direct and almost symbiotic link between driver and machine. The car goes exactly where you want it to go and the transition happens instantaneously.

As mentioned previously, not everyone will enjoy the GTS. Some might find it too harsh and prefer the Carrera S, and others might not find it harsh enough and will want to look at the GT3. But someone once said that life is better in the grey zone and I for one do not see the GTS as any sort of compromise on the Carrera S or GT3. I see it as the absolute best of both worlds and the best real-world Porsche 911 you can buy.

The record-setting time was 10:32.064. The new Urus will officially debut in mid-August. This is certainly one way to pre-introduce a new vehicle… Just...
Read more

The trademarks have recently been filed by General Motors The names are Aurora, Vale, Mist, and Magnetic The Aurora nameplate was used by...
Read more

$6,000 price increases, due to increasing costs Ford adding new tech and 10 miles of range to Lightning EV Ford will be reopening the...
Read more
Previous articleAn Update can Add Charging Speed and Range to Older Porsche Taycan Models
Next articleThe most Powerful version of the BMW XM will be Called Black Label