We take the 2022 Porsche Taycan GTS out for the first time and see if the GTS treatment can work with electric vehicles. The answer is yes.

– Not as much range as other EVs with a similar price

– Not a lot of rear seat room in the sedan

– Hard to find in dealers

It was only a matter of time before the Porsche Taycan GTS came to be. Unveiled at last year’s Los Angeles International Auto Show, the GTS version of Porsche’s popular Taycan EV is everything GTS fans will be looking for, minus the exhaust note. As a GTS fan myself, I always found that these three letters represented the perfect version of any Porsche model, and my opinion doesn’t change after having experienced the Taycan variant. 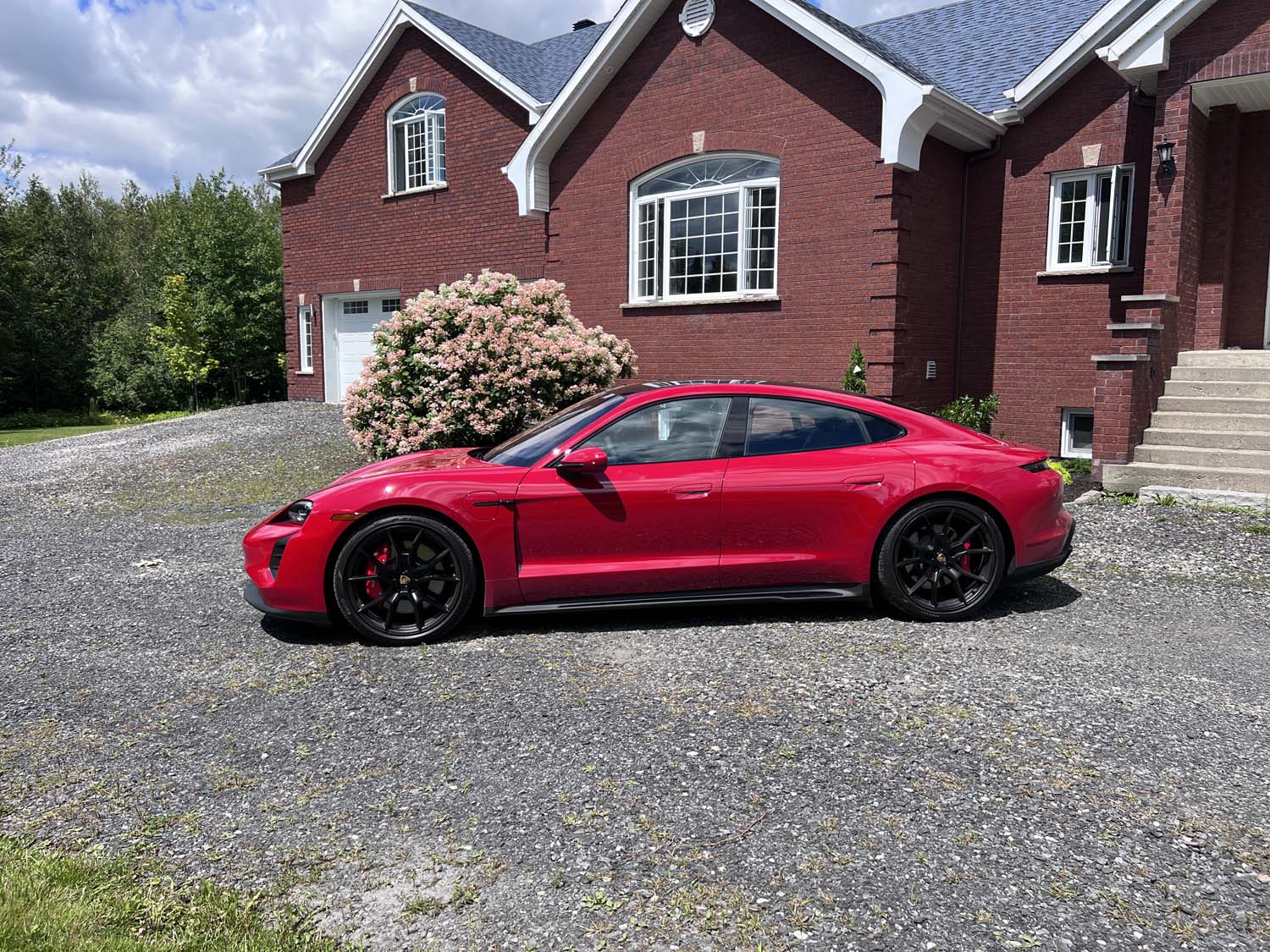 Historically, GTS models aim to achieve the perfect balance of track performance and on-road usability. In the Porsche 911 lineup, the GTS trim sits between the Carrera S and GT3 in how it feels, handles, attacks a track, and functions as a daily driver. The Porsche Taycan GTS is a little different in that the Taycan lineup doesn’t really have a full-on track-focused trim to model its handling and behavior on. Put another way, there’s no Porsche 911 GT3 equivalent in Taycan form. Still, the Taycan GTS is considerably sharper and more agile than any other Taycan I’ve driven, and it has a unique personality that sets it apart from every other version.

The balance so typical of GTS models can be found in how this Taycan model accelerates from a stop, and how it handles a sharp turn. Point blank, it corners better than any other Taycan, and that’s saying something. As you begin to engage the turn and move towards the apex, the GTS is nudging you to apply more power and as you do, the EV remains perfectly controlled and balanced. I don’t know if it’s still in style to say that a car handles like it’s on rails, but that’s exactly how the Taycan GTS feels. 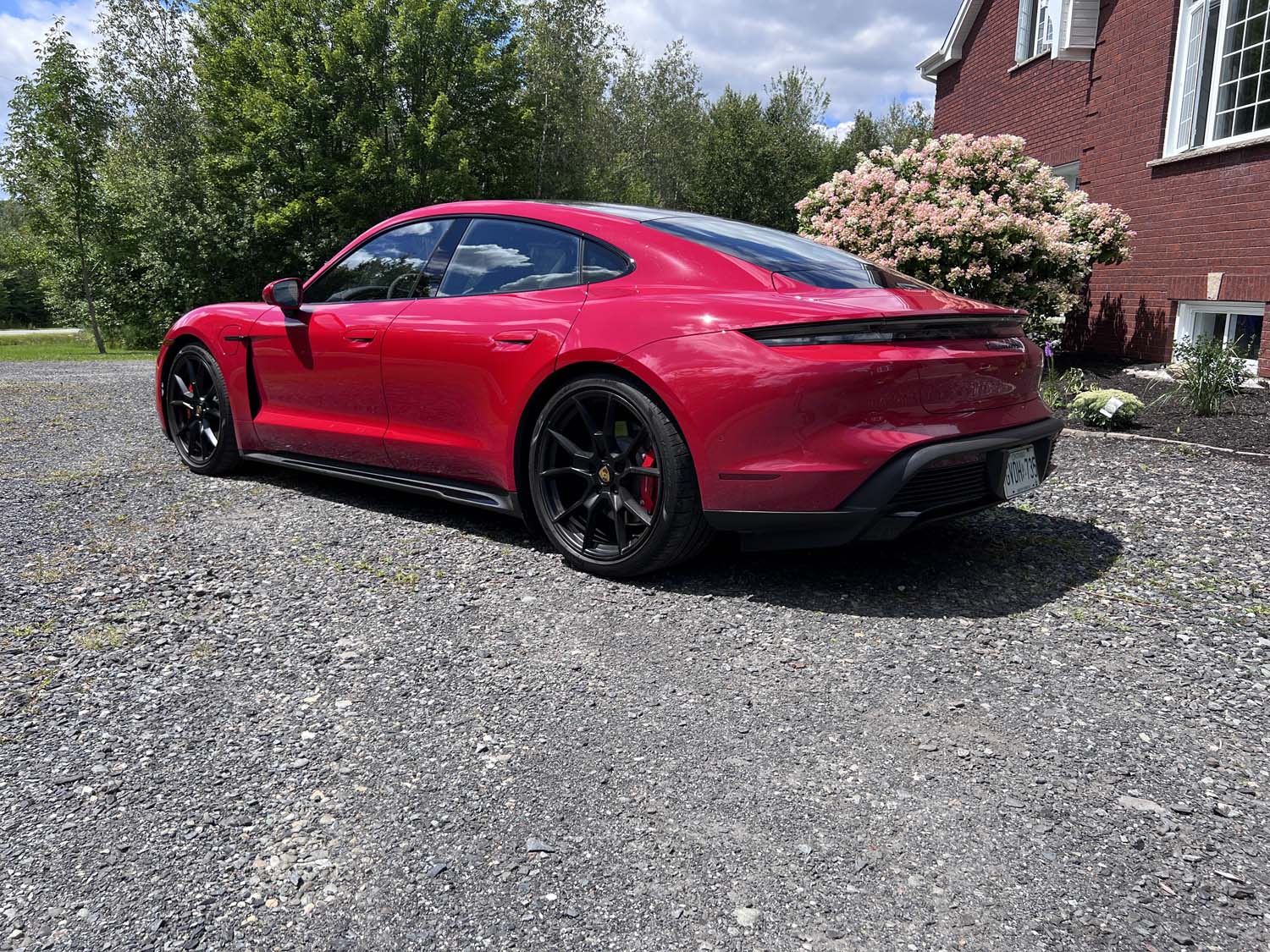 This isn’t by coincidence. The Taycan GTS is designed to handle better. It comes standard with an adaptive air suspension system as well as Porsche’s Active Suspension Management technology, and both have been uniquely tuned to optimize handling on every type of surface. The adaptive suspension also includes a self-leveling feature. Porsche Torque Vectoring and an optional rear-axle steering system also contribute to ensuring the highest level of control on winding roads.

The end result is the stuff performance enthusiasts dream of. Perfectly planted and thoroughly controllable, the Taycan GTS’ handling is an exact match with its straight-line performance.

The Taycan GTS is powered by two motors, one on each axle, delivering 509 horsepower and 627 pound-feet of torque to all four wheels. Now, dial it up to launch mode, and you will get 590 horsepower when you step on the right pedal, powering the EV to 100 km/h in 3.7 seconds. 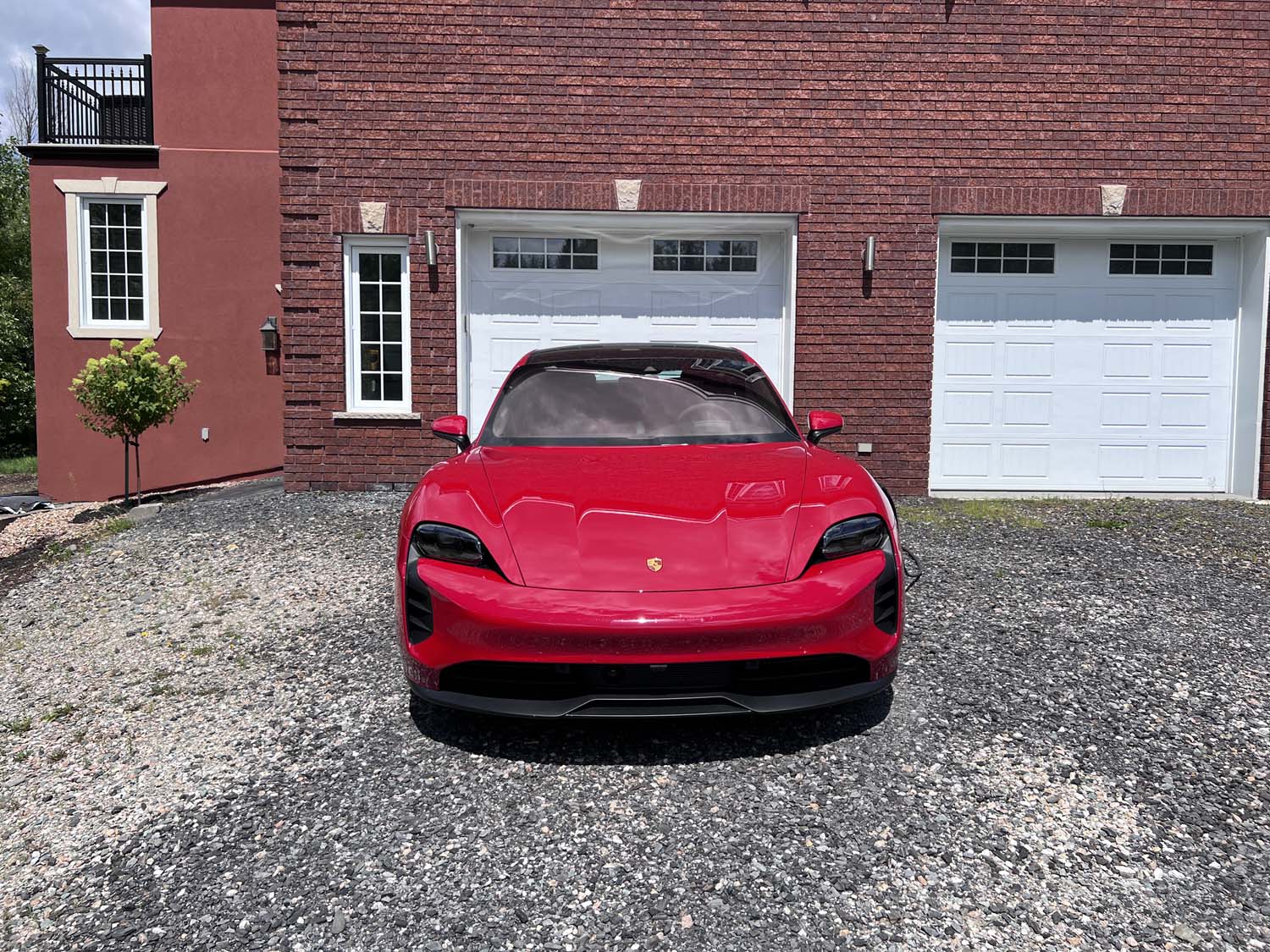 Looking at these numbers, you might be wondering if the GTS is worth the extra $20,000 over the Taycan 4S given the relatively similar acceleration times. And while you’re there, why not put an extra $20,000 and get the Turbo, right?

There isn’t a wrong answer here, but I will say that the GTS feels different than any other Taycan I’ve driven, and it handles better. It’s not the quickest Taycan, but I had more fun driving the GTS than the Taycan Turbo S which was a blast in its own right. And as for its 0-100 km/h, I think anyone who has experienced cars with this level of performance will agree with me that there’s very little tangible difference between 3.7 seconds and 3.2 seconds… 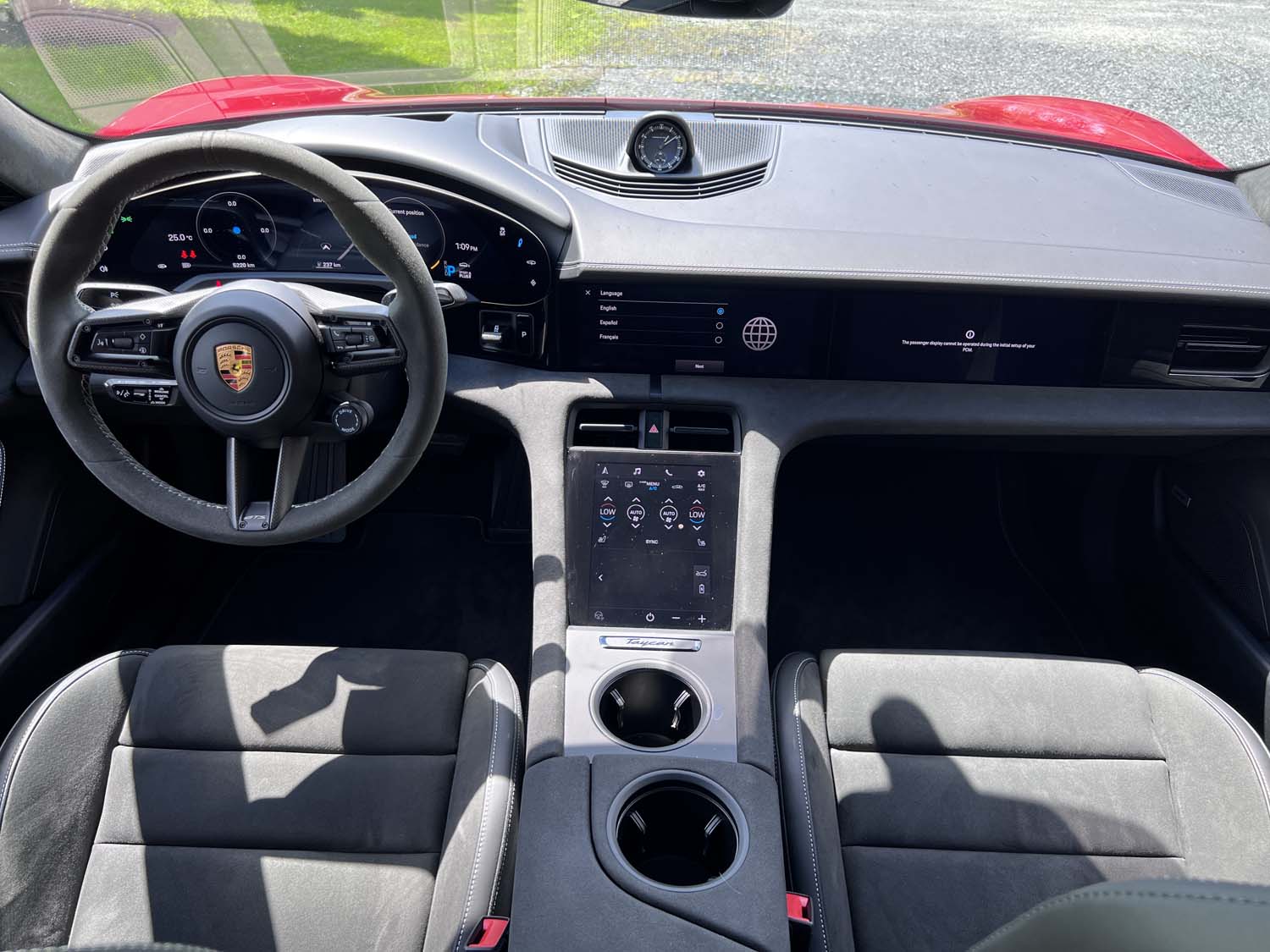 The Porsche Taycan GTS doesn’t just drive differently from other Taycans, it looks different too. In true GTS form, it gets blacked out body elements including the side skirts, front apron, rear diffuser, and headlights and taillights. It also gets available RS Spyder wheels that aren’t found in other Taycan trims.

Inside, a Race-Tex (similar to Alcantara) treatment can be found across the cockpit, from the seats to the steering wheel cover to the roof lining. Matte carbon trim is found throughout as well, as are embossed GTS logos on the headrests. My tester didn’t have the new Porsche Variable Light Control panoramic sunroof, but the technology made its debut on the GTS. 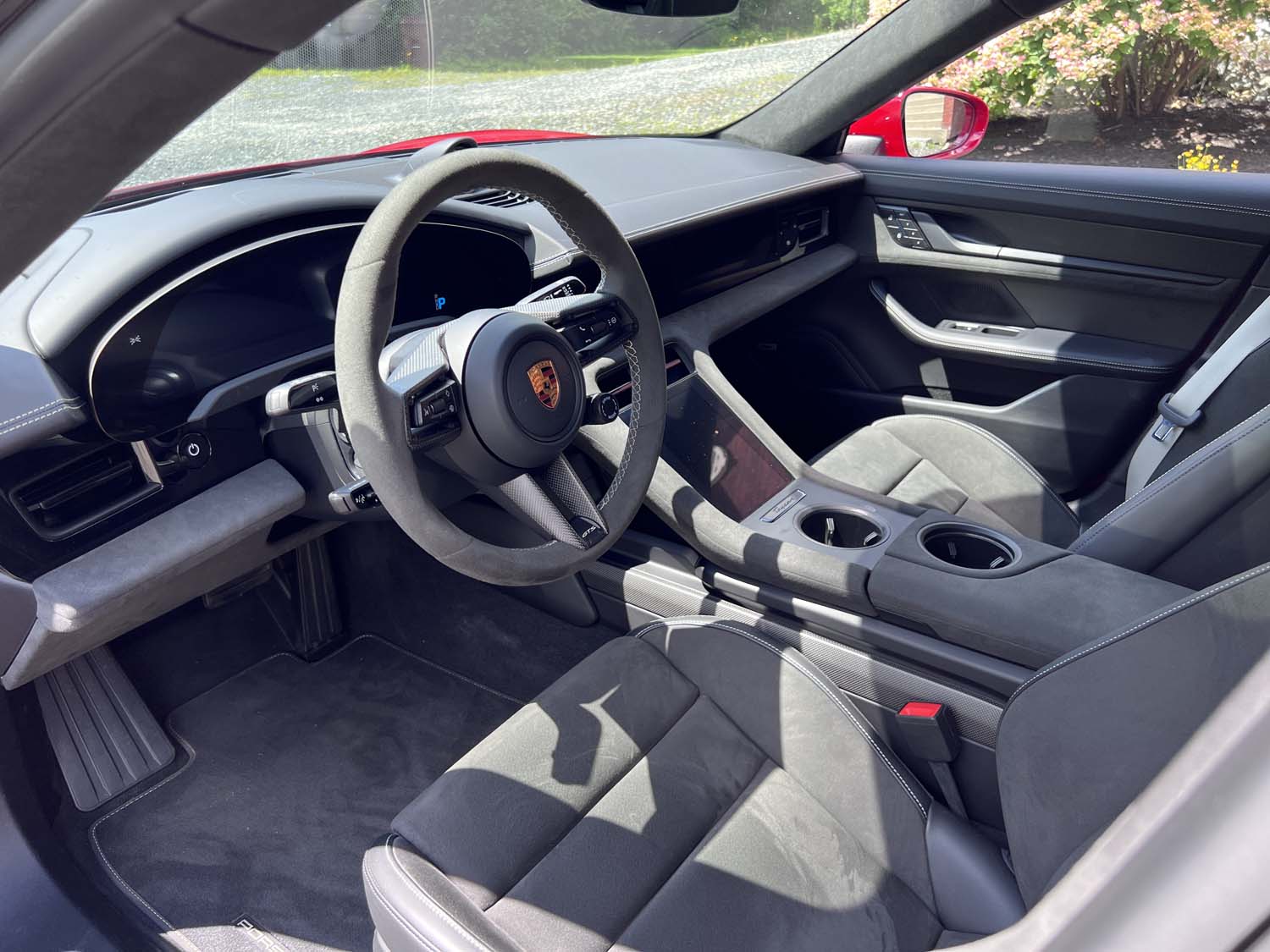 My tester was the sedan, not the Sport Turismo trim which is exclusive to the GTS model here in North America. Essentially a Taycan Cross Turismo without the off-road design bits, the Sport Turismo adds 45 mm of rear headroom and offers up to 1,200 litres of total cargo space. As I have often remarked, the Taycan sedan isn’t very practical in the back seat, especially if you must fit a child seat back there. The Cross Turismo is a much more appealing option in that situation, and the same can be said for the Sport Turismo.

Back on the road, two other things stand out once you get over how well the Taycan GTS corners. The first is the brakes which are taken from the Taycan 4S, but they are larger, measuring in at 390 mm in the front and 358 mm in the back. The bite they provide ups the driver’s confidence to even higher levels as you quickly realize the GTS can brake as hard as it accelerates. 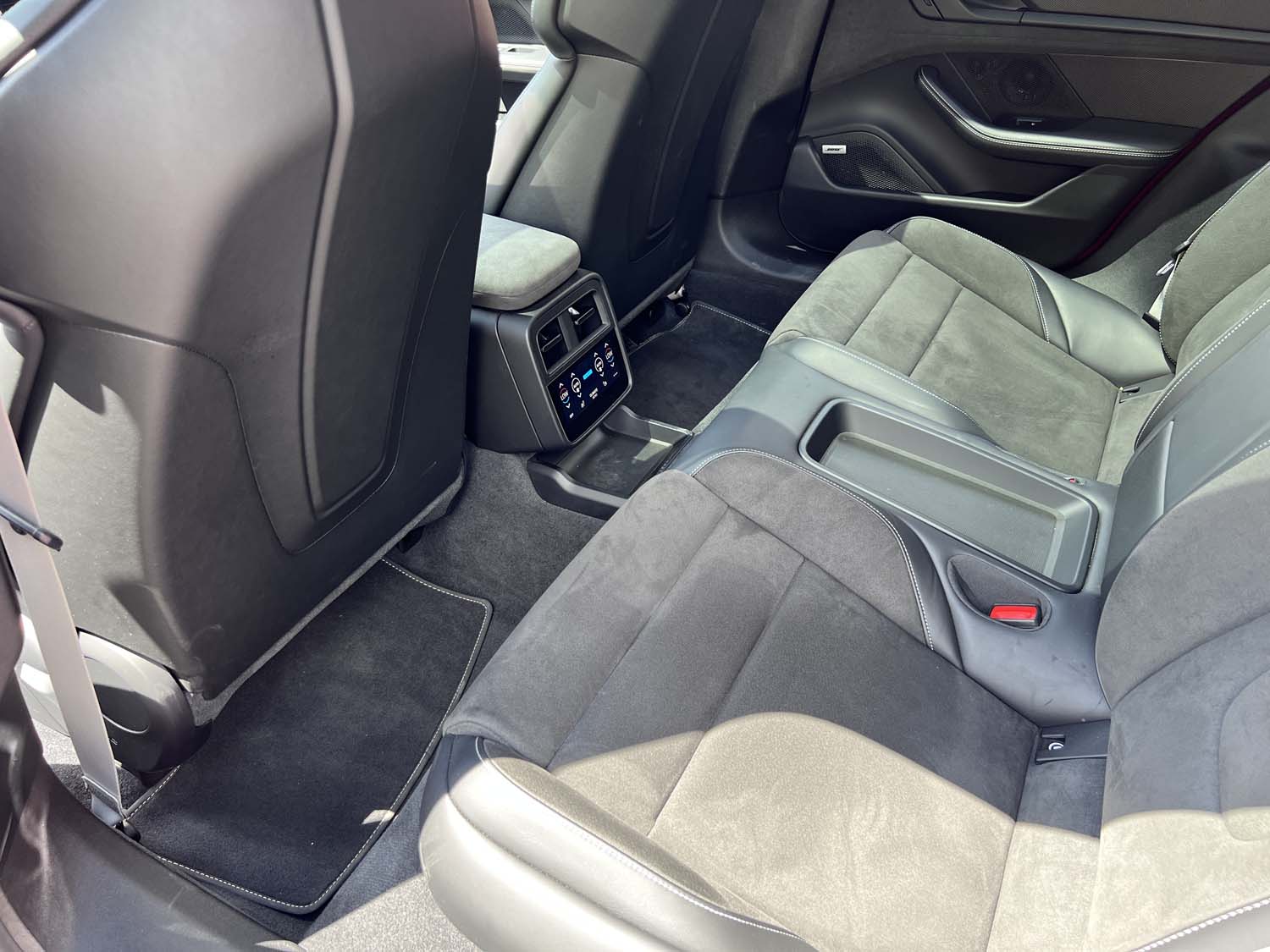 Next is the sound, tuned differently in the Taycan GTS when in Sport Plus mode. I personally don’t know how I feel just yet about all of these overly engineered sounds found in new electric vehicles, but in this case, I did notice the sound and rather enjoyed it. A GTS should sound different and the Taycan iteration certainly does. I still much prefer the sound coming from a GTS model with an internal combustion engine, however.

Even more range for the Taycan

Lastly, the Porsche Taycan GTS allowed me to experience first-hand the improvements Porsche has made to the battery and efficiency of its electric vehicle. As I picked up my GTS, the fully charged battery displayed a range of 425 kilometres. It was the first time I saw over 400 km on a Taycan. The Porsche EV has routinely surpassed its rated range in real-world testing, but now the GTS as well as other Taycans go even further. Official updated range numbers aren’t out, but I was able to complete a 410-kilometre journey with 10% left in the battery. In previous Taycan models on the same journey, I had to stop at a quick charger somewhere along the way. 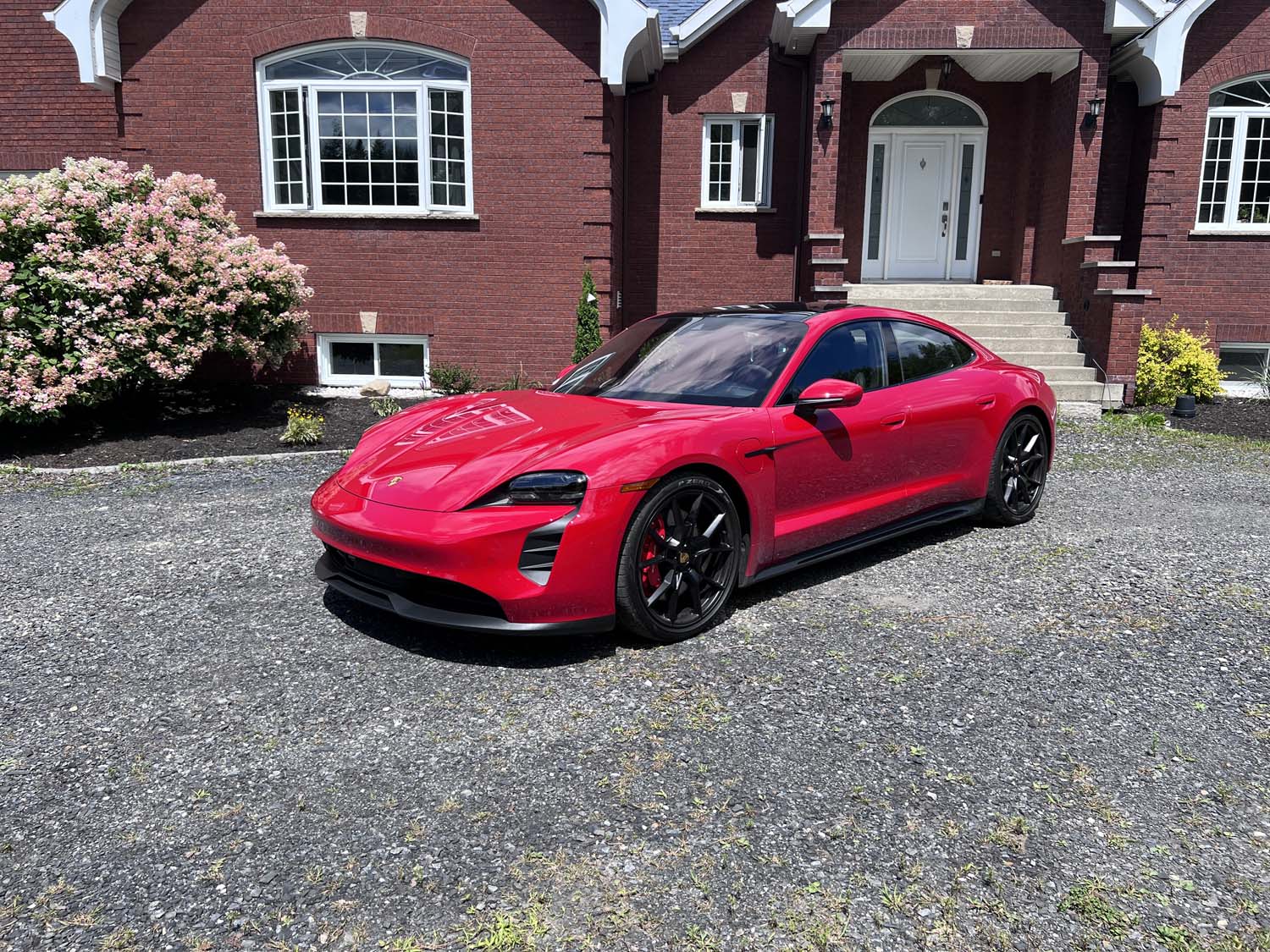 Obviously, Tesla Model S and especially Lucid Air owners will laugh at those numbers. On the other hand, if you need more than 400 kilometres every day, I’d say the joke’s on you. I haven’t driven the Lucid Air yet, but I’d take any Taycan over any Model S because of its solidity, its handling, and its more refined overall experience.

As for which Taycan exactly, well the GTS makes a very convincing argument. In true GTS fashion, it attains the perfect middle point along the performance-to-handling graph, creating a remarkably engaging experience worthy of the Gran Turismo Sport brand. I’d get the Sport Turismo version because I need those extra 45 mm in the back seat, but either way the Taycan GTS proves that those three letters translate to EVs.

This model will use the new PPE platform and it will feature a wider body and larger wheels. The A6 e-Tron concept reportedly...
Read more
Previous articleAll-New 2023 Mercedes-Benz EQS SUV Priced From $104,400 in the US
Next article2023 Toyota GR Corolla Pricing Possibly Leaked