Cadillac is the first General Motors division to go all-in on EVs, and its lineup will exclusively consist of fully electric vehicles by 2030. Spearheading that push to electrification is the 2023 Cadillac Lyriq.

This midsize, five-passenger luxury crossover, which is slightly bigger and lower than the current Cadillac XT5, has been rolling off the assembly line since March 21st, which started production in Debut Edition only for the first customers who ordered the vehicle when its reservation form went online on September 18th. It took only 20 minutes for all those Debut Edition units to get scooped up. 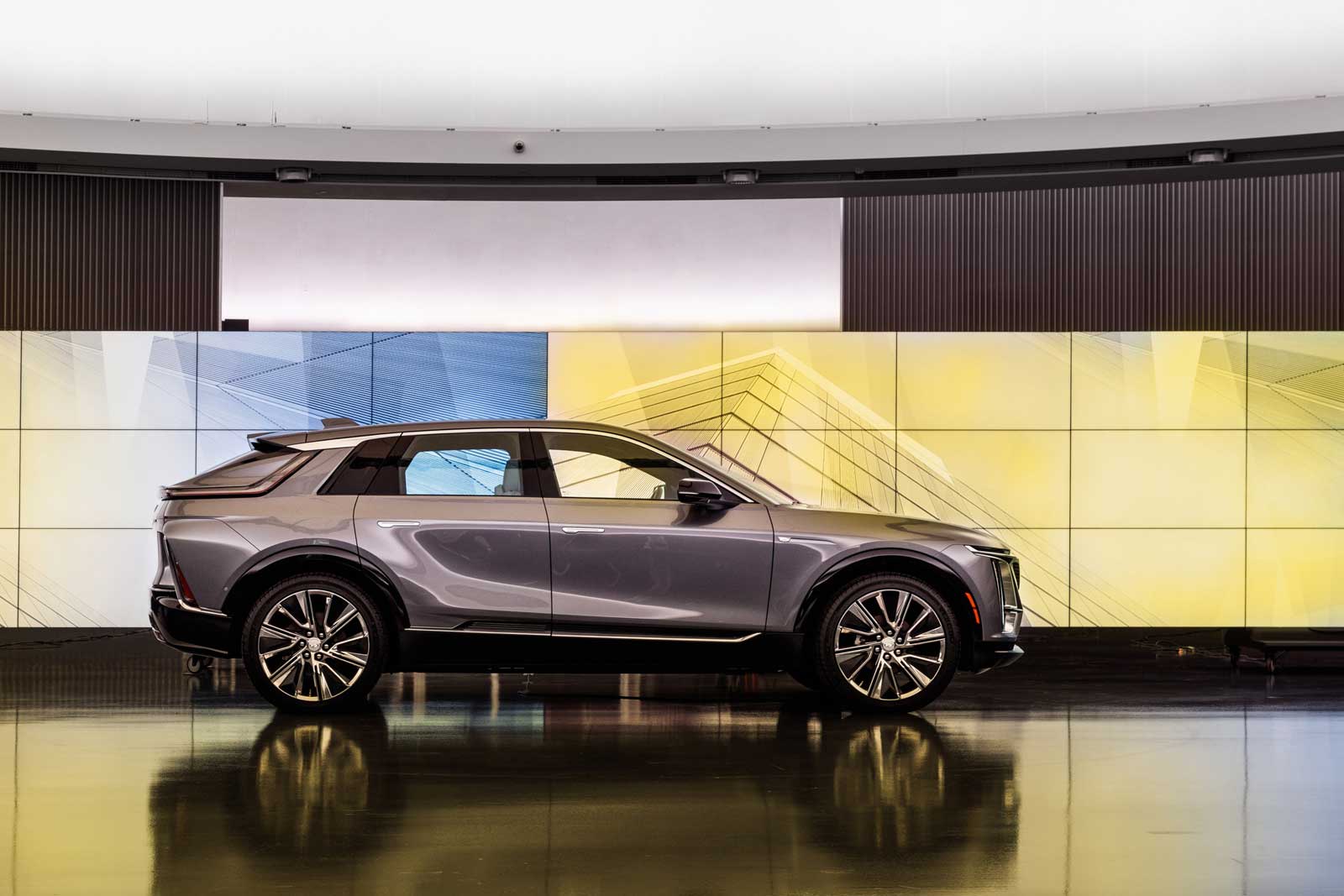 Who will buy the 2023 Cadillac Lyriq?

The average age for luxury segment vehicle buyers is in the fiftysomething range. However, Cadillac claims that reservation holders for the new Lyriq are younger. The brand’s advertising campaign also focuses on a younger clientele, with more people around the crossover in pictures and video ads, using Mondrian inspired colours—Piet Mondrian (1872-1944) was a pioneer of abstract art and used simple combinations of straight lines, angles and primary colors.

The brand says it currently has more than 233,000 hand-raisers in the U.S., while in Canada, it has more than 17,000 hand-raisers and over 1,800 reservations for the vehicle so far. What is a hand-raiser, exactly? It’s someone expressed interest in the vehicle without ordering one or taking the next step, and could simply be someone who signed up for email updates. Cadillac says 10% of those who raised their hand are typically converted into orders, but that statistic is for combustion-engine vehicles, not EVs like the 2023 Cadillac Lyriq. 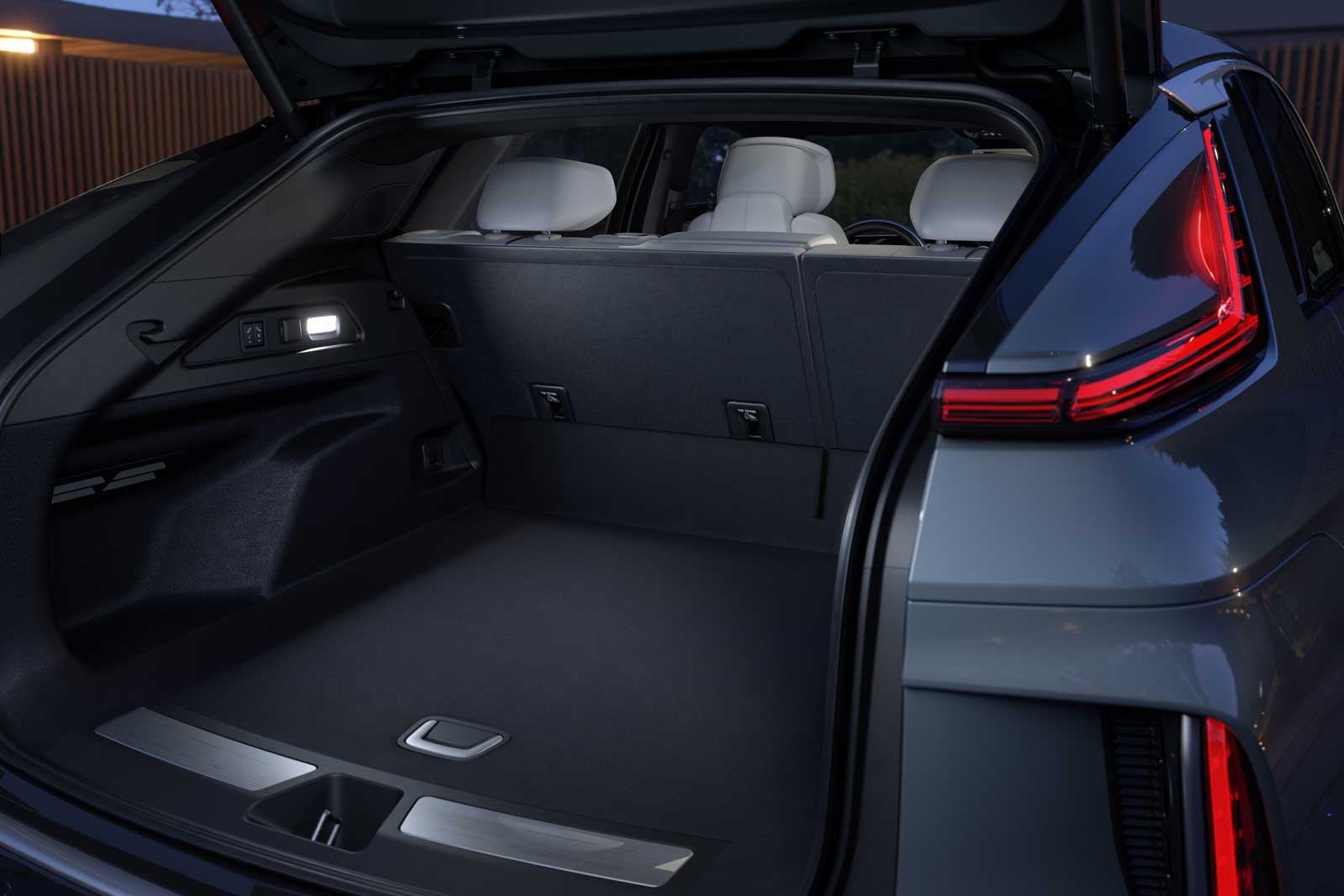 What’s under the hood?

Well, the Lyriq’s hood doesn’t open, but under it will be all the electrical hardware to get this crossover moving along. The company preferred concentrating cargo space in the rear of the Lyriq instead of splitting it up with a frunk (front trunk). Speaking of cargo space, it’s rated at 28.0 cubic feet or 793 litres with the rear seats in place, 60.8 cubic feet or 1,722 litres with the seatbacks folded down.

In the first units rolling off the assembly line in Spring Hill, Tennessee, an Ultium Drive motor will feed the rear wheels, which develops 340 horsepower and 325 pound-feet of torque. In late 2022, a Performance AWD variant of the Lyriq will appear, using two motors and benefitting from more power, although those specifications haven’t yet been revealed.

A 100.4 kWh Ultium battery pack will juice up the electric motor in the Debut Edition, which is said to offer an estimated range of more than 300 miles or 480 kilometres on a single charge. On a Level 2 charger, the battery can be replenished at a max rate of 19.2 kW, while DC fast charging rates top out at 190 kW—Cadillac says a 10-minute pit stop on a fast charger will yield up to 76 miles or 122 km of range. The Lyriq will feature one-pedal driving if desired, and as in the case of pretty much all new EVs on the market, charging can be managed through a smartphone app. 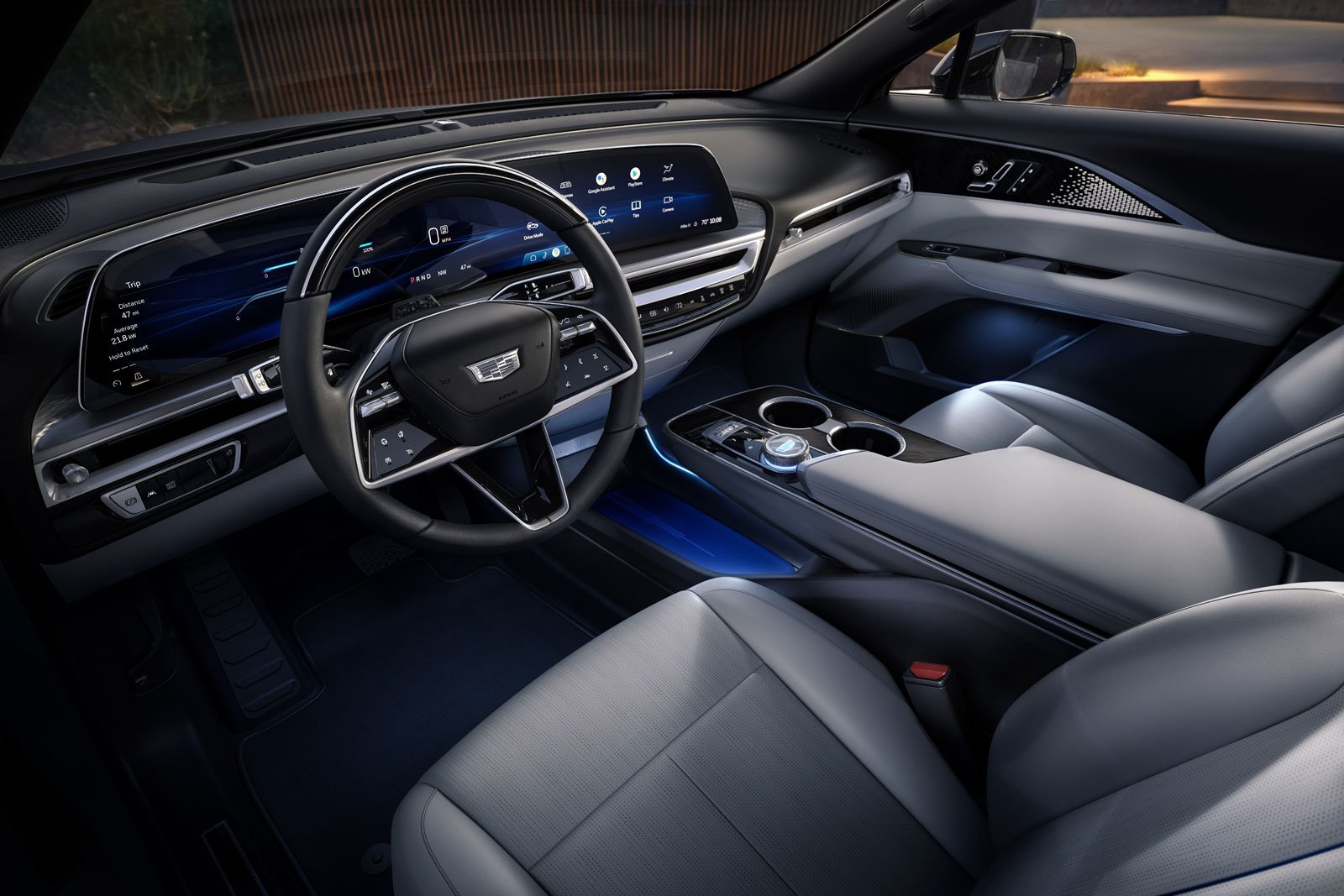 How luxurious is the 2023 Cadillac Lyriq?

While it may not be as posh as a Cadillac Escalade that costs almost twice as much, the Lyriq shouldn’t skimp on design details and fine craftsmanship. The cockpit will boast horizontal lines with satin trim, while the Debut Edition will feature open-pore Dark Ash wood trim, backlit door panels, a fixed glass roof and Inteluxe seat upholstery—Cadillac-speak for man-made leather. Standard wheel size is 20 inches, but a set of 22-inch alloys are available. The Debut Edition is based on the entry-level Luxury trim, so more lavishly equipped editions should follow later on. We’re expecting Premium Luxury and Sport trim levels, as is the case with other Cadillac sedans and utility vehicles.

The Lyriq Debut Edition also gets a full list of comfort and convenience features, such as a digital key access, heated and ventilated front seats with 8-way power adjustments, a heated steering wheel, wireless phone charging, a power-adjustable steering column, a hands-free power liftgate and dual-zone climate control. Super Cruise will come standard, as will a 33-inch curved LED display housing both the fully digital driver instrument panel and the infotainment system touchscreen, along with a 19-speaker AKG Studio surround sound system.

When will the 2023 Cadillac Lyriq arrive in dealerships?

It will take a while before dealers get quantifiable inventory. The Debut Edition units are first ones being built right now, and they’re already spoken for by U.S. buyers. Production of the Canadian-spec Lyriq starts on August 8th, so the first units earmarked for north of the border won’t be seen on the road before next fall. Production of the Performance AWD variant will start before the end of 2022, or in early 2023. However, customers in both countries can order their Lyriq by visiting their local Cadillac dealer starting on May 19th.

Only two exterior and interiors colours are available on the Debut Edition, Satin Steel Metallic and Stellar Black Metallic on the outside, Sky Cool Gray and Noir on the inside. However, once other trim levels will be available, more paint colours will be offered. 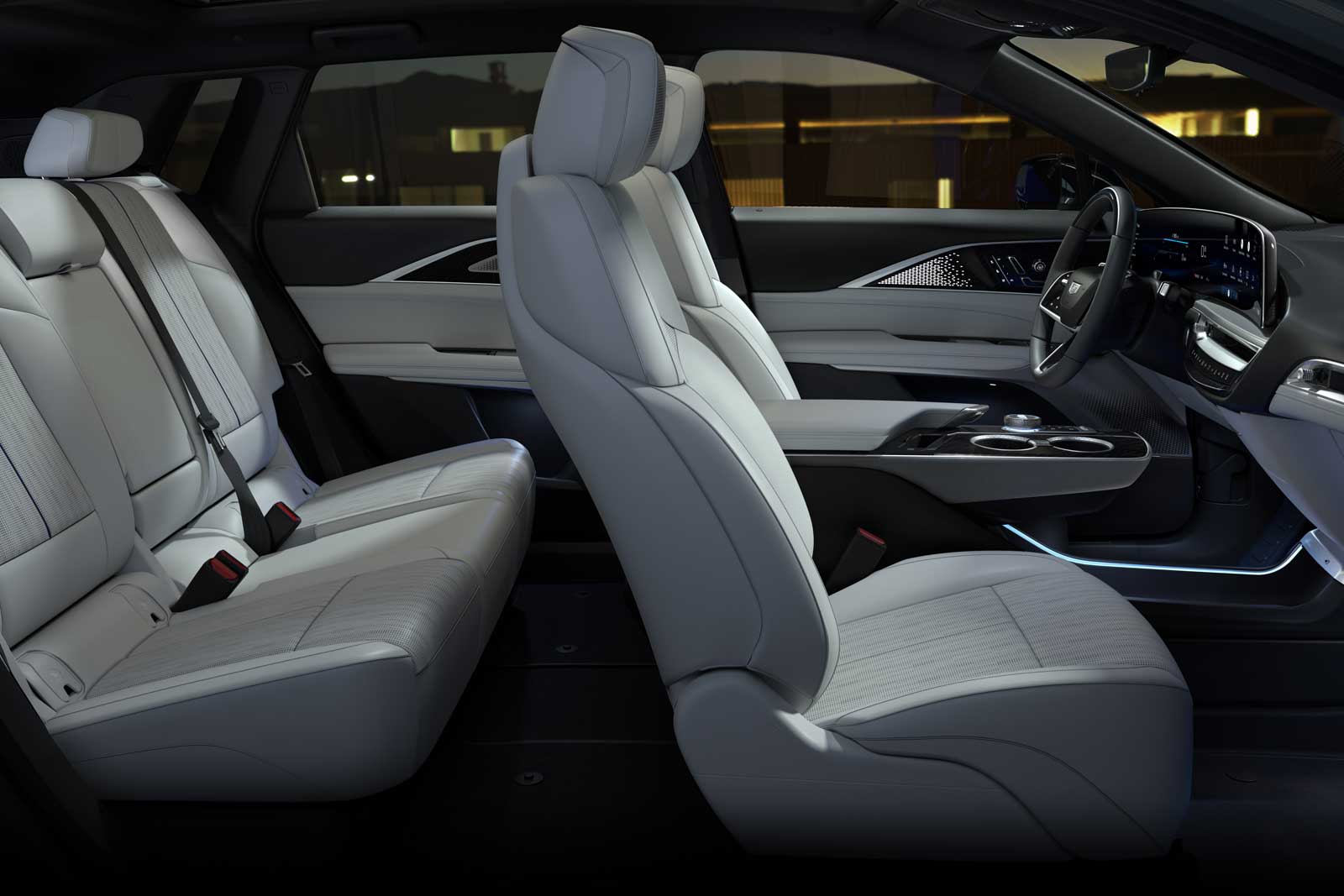 How much will the Lyriq cost?

The 2023 Cadillac Lyriq Debut Edition started at $59,990 in the United States and at $69,898 in Canada, destination freight charge included in both cases. Pricing and specs for other trim levels has yet to be announced, but these details should come to light before the order books open on May 19th.

Competition in the Lyriq’s luxury EV crossover space is scarce for now, but loosely includes the BMW iX, the Audi e-tron, the Tesla Model Y and the Jaguar I-PACE. Expect the Mercedes-Benz EQC, a yet-unnamed Acura crossover (which may be called the ADX) using GM’s Ultium battery and powertrain, and others to rival the Lyriq within a couple of years.