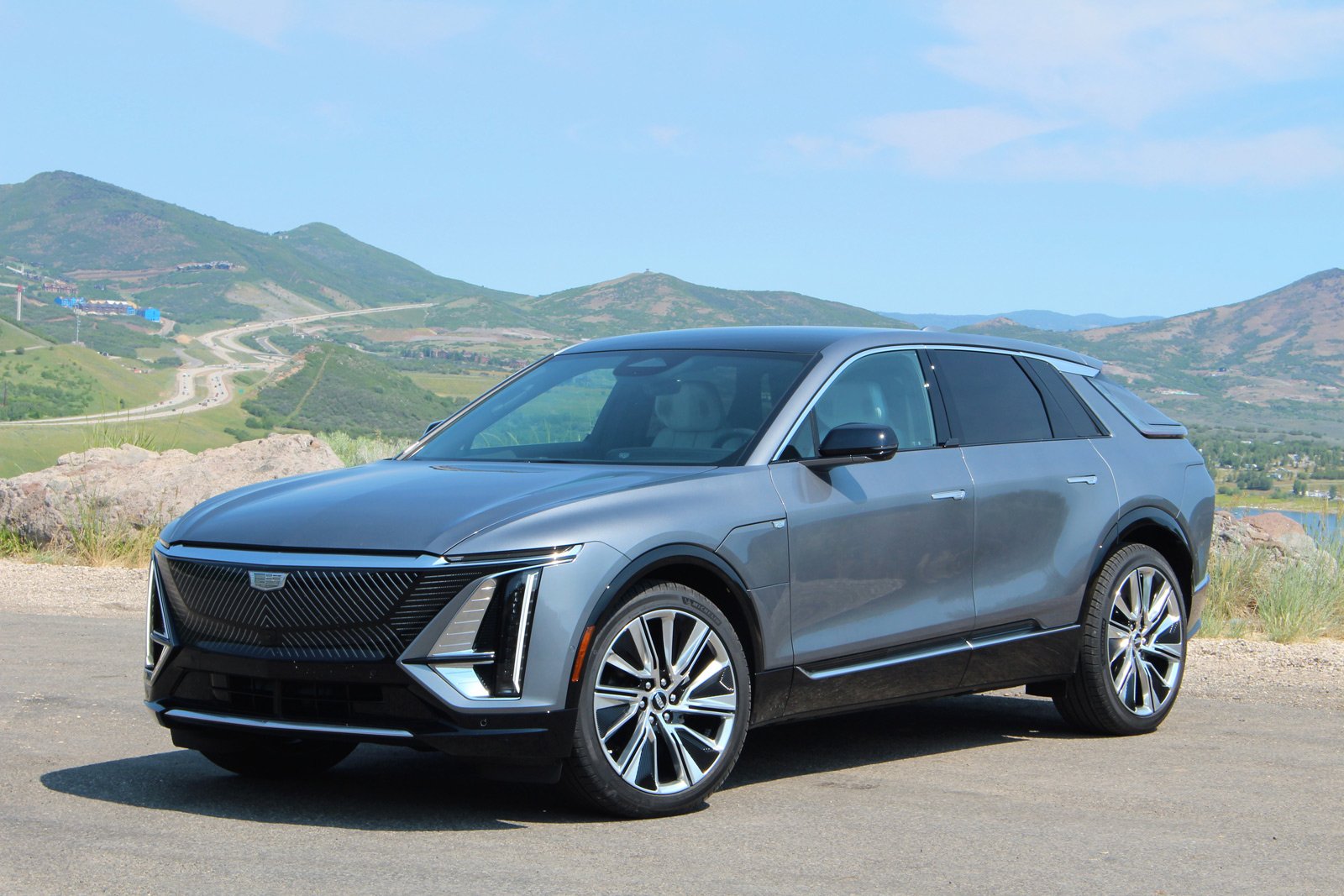 The brand’s transition to electrification is off to a great start.

Cadillac’s transition to electric vehicles has officially begun, and although the announcement that it would stop selling combustion-engined cars, crossovers and SUVs by 2030 raised more than a few eyebrows, the all-new 2023 Cadillac Lyriq may prove that the luxury brand can convince its loyal customers that an EV-focused future may not be so bad after all.

Admittedly, it’s a little confusing to see Cadillac release its very first electric vehicle within a few months of debuting the CT4-V Blackwing, the CT5-V Blackwing and the Escalade-V. However, we’re still eight years away from the termination of fossil-fuel Cadillac vehicles, and in the meantime, the Lyriq is here to remind us that despite its electric powertrain, it’s still very much a Cadillac. 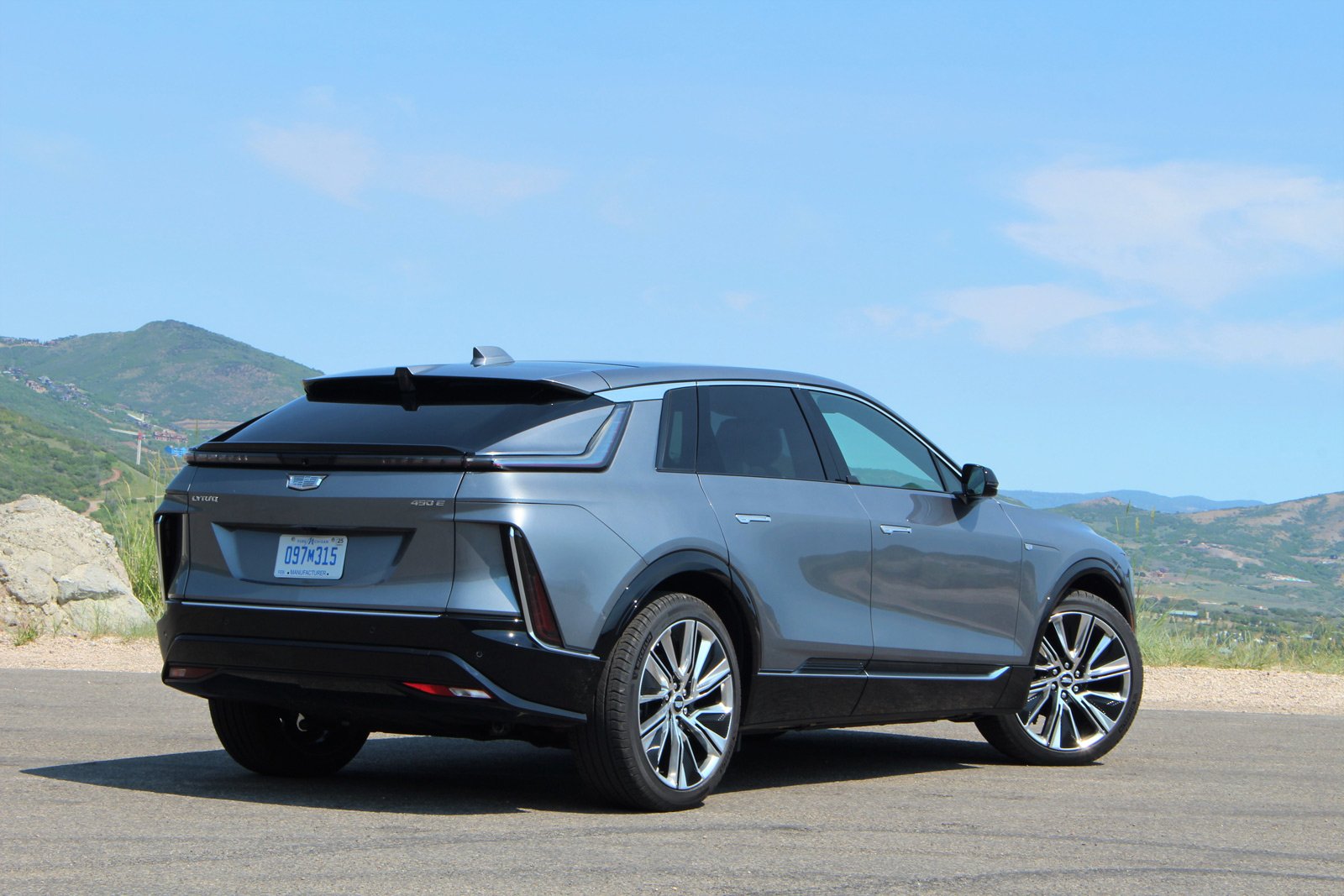 We were invited to Park City, Utah to sample the new midsize crossover, which will compete against the Audi e-tron, the BMW iX, the Jaguar I-PACE and the Tesla Model Y so far. Others will obviously follow, such as a production version of the Lincoln Star Concept, the Polestar 3 and the VinFast VF 8.

Aside from the limited-run Debut Edition offered in the United States, the Lyriq is offered in only one trim level—the base Luxury—that’s available with either a rear-wheel drivetrain or AWD, using GM’s new Ultium battery and Ultium Drive motor technologies. The RWD variant is equipped with a single electric motor that develops 340 horsepower and 325 pound-feet of torque, juiced up by a 100 kWh battery pack. Driving range is pegged at an EPA-certified 312 miles, and an NRCan-certified 502 kilometres. 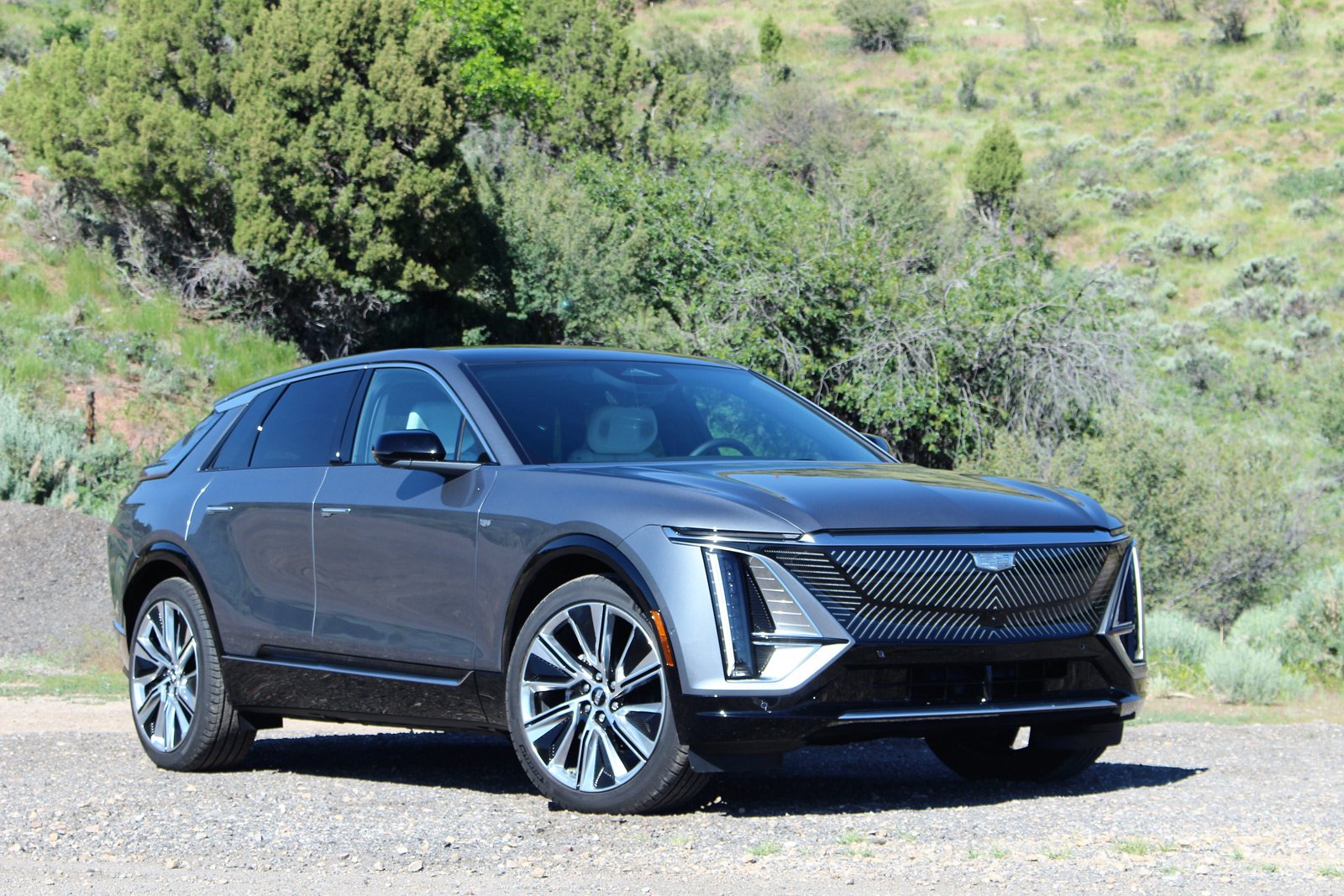 Available in early 2023, the Lyriq AWD will boast two electric motors for a combined output of 500 horsepower. Its torque rating hasn’t been made official yet, but should be in the vicinity of 500 pound-feet. It will also get the 100 kWh battery pack. Driving range also hasn’t been announced yet, and we expect it to be a little lower than in the Lyriq RWD. Towing capacity is rated at 3,500 pounds.

Level two charging at speeds of up to 19.2 kW is available, and Cadillac will partner with Qmerit for the installation of home chargers. The Lyriq also comes with a dual-level charge cord on which adapters for any type of 120V or 240V outlet can be fitted. DC fast charging is obviously available as well, with speeds up to 190 kW. 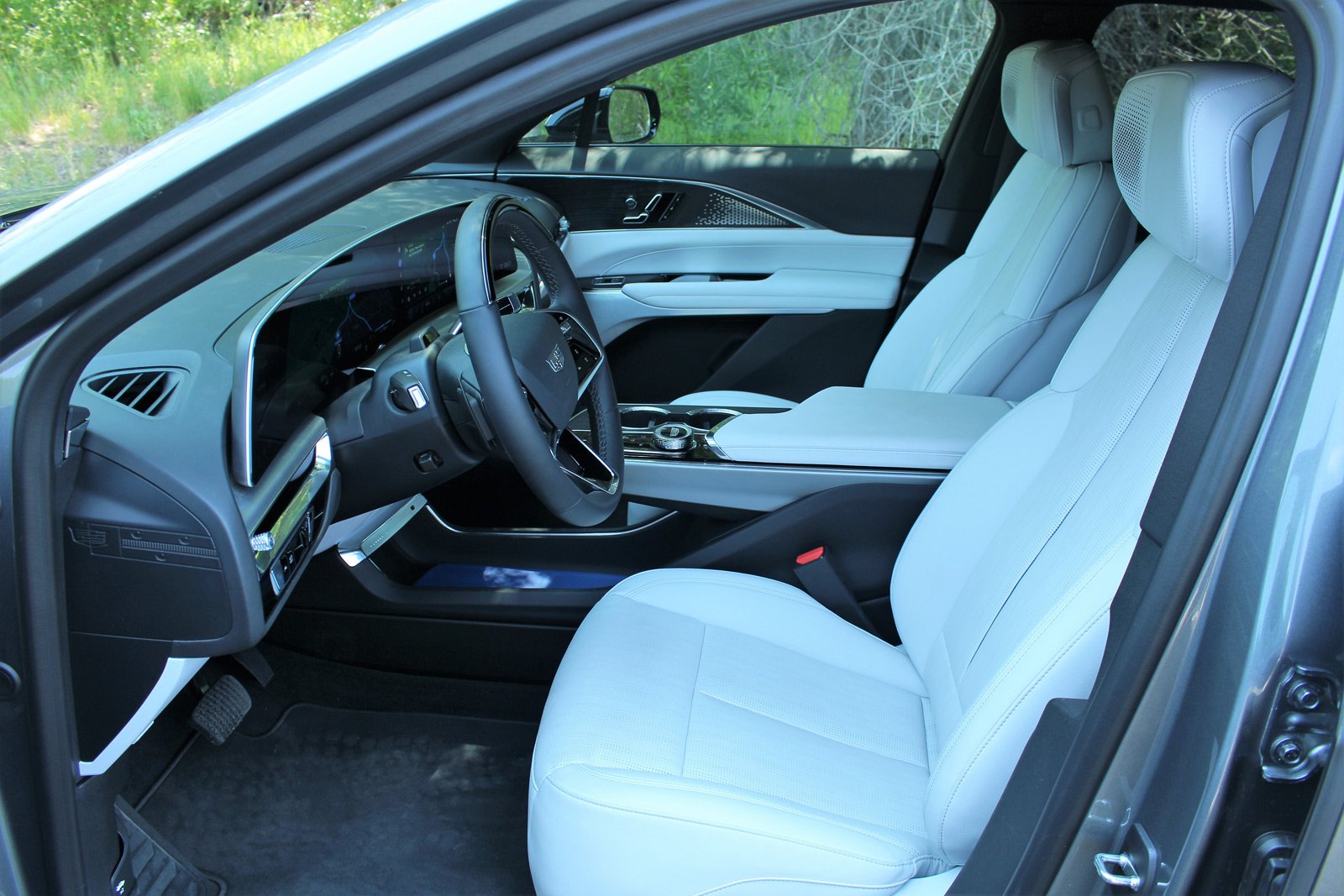 For our first encounter with the 2023 Cadillac Lyriq, we were limited to the rear-wheel-drive variant. Despite its curb weight of 5,688 pounds or 2,580 kg, performance is brisk, obviously, with an abundance of instantaneous torque that makes EVs so fun to drive. The Lyriq also has good road manners, thanks to its finely tuned suspension and electric-assist steering.

There are three drive modes including Tour, Sport and the configurable MyMode, affecting throttle, steering and sound enhancement, but not the suspension. The vehicle has passive dampers instead of complex and costly electronically controlled units, using a mechanical valve that adjusts itself based on the frequency input of the road. In short, they can soak up bigger bumps and potholes as needed, and provides a smooth ride on flatter surfaces. 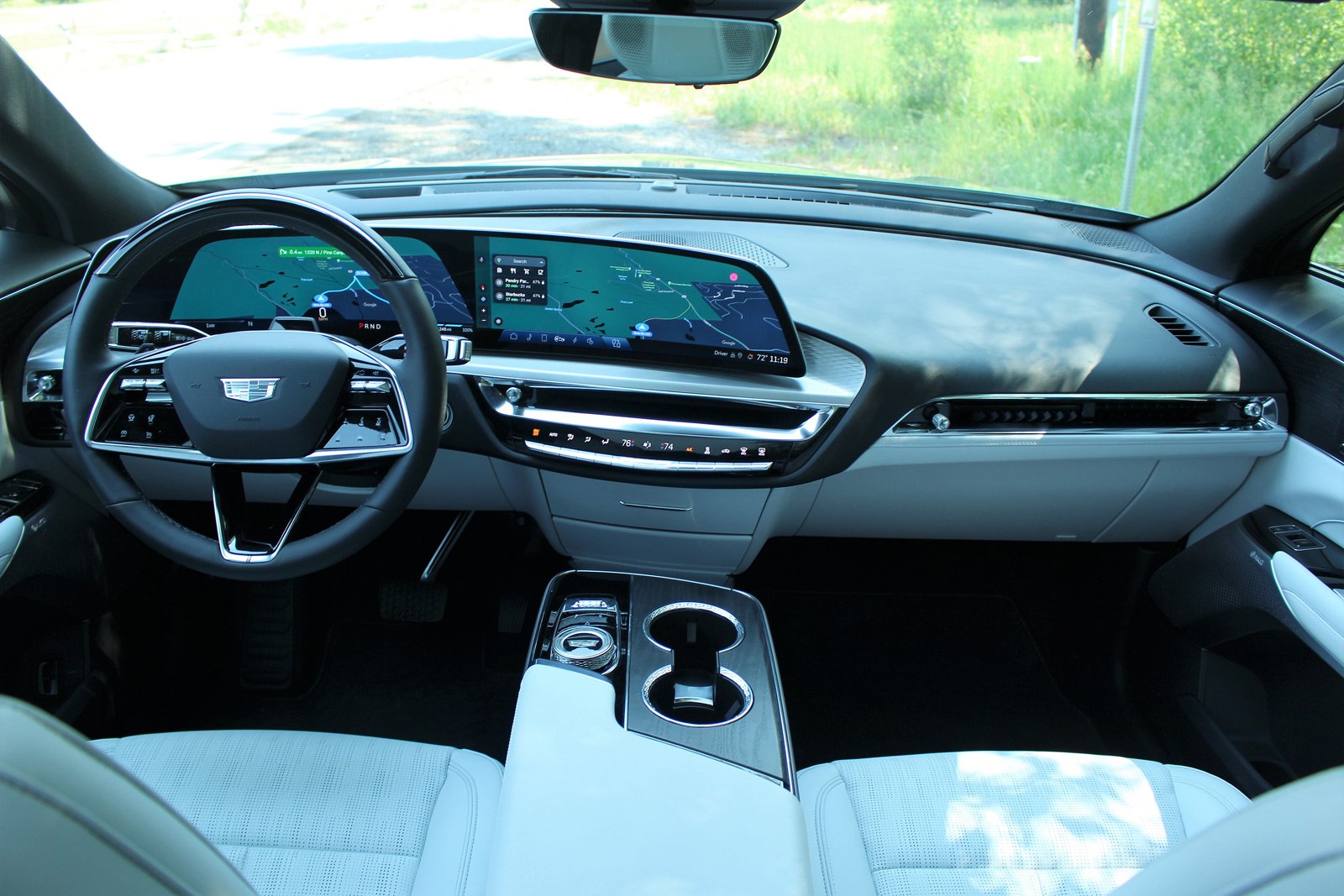 Smooth is in fact a word that can truly describe the 2023 Cadillac Lyriq. On the road, it feels composed and in control, and the cabin is very well insulated, despite not having a combustion engine to drown out road, tire and wind noise, and thanks to Bose’s latest noise cancelling technology. One-pedal driving can be activated with two levels of energy regeneration, or drivers can use the new Variable Regen on Demand feature that works with a pressure-sensitive paddle on the left backside of the steering wheel. Either one can bring the vehicle to a complete stop without us touching the brake pedal.

The Lyriq’s design is also a major aspect of the vehicle, as it ushers in a new era for the brand. Creating a new front-end visual signature for EVs can be challenging, as it traditionally revolved around the grille. In place of the latter, Cadillac’s artists conjured up a black panel with welcome lighting, thanks to an animation of 50 LED strips and an illuminated logo. The turn signals are slim lenses running along the hoodline and the vertically stacked headlights are positioned low at each end of the front fascia. 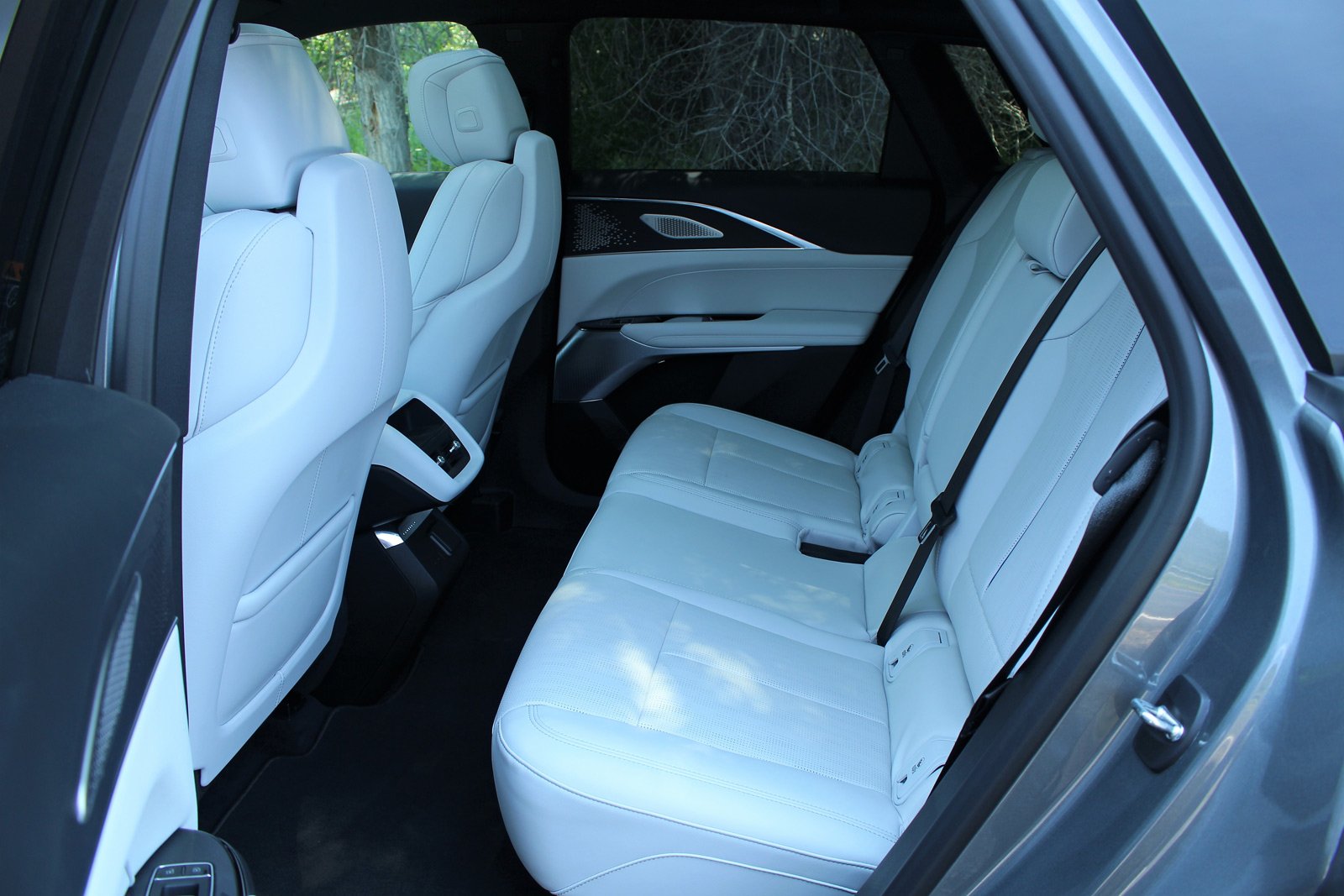 The side profile is striking with a long hood, a steeply raked windshield and 20- or 22-inch wheels, culminating in a bulbous rear end with thin strips of LEDs acting as both the turn signals and the taillamps. The Lyriq looks resolutely sophisticated and mildly futuristic, and all future Cadillac EVs will share these design characteristics moving forward.

On the other hand, the electric door latches are somewhat of a hassle, as we must push the satin-painted switch and grab on to a small shark fin at the base of the front-door window, or grab onto the edge of the rear door itself, to open them. Also, there’s no rear window wiper and washer, deemed irrelevant as the vehicle’s aerodynamics are said to prevent the window from getting dirty. We’re skeptical about that and our first drive under the blazing hot sun of Utah couldn’t validate anything in that regard. We’ll see when winter comes around. 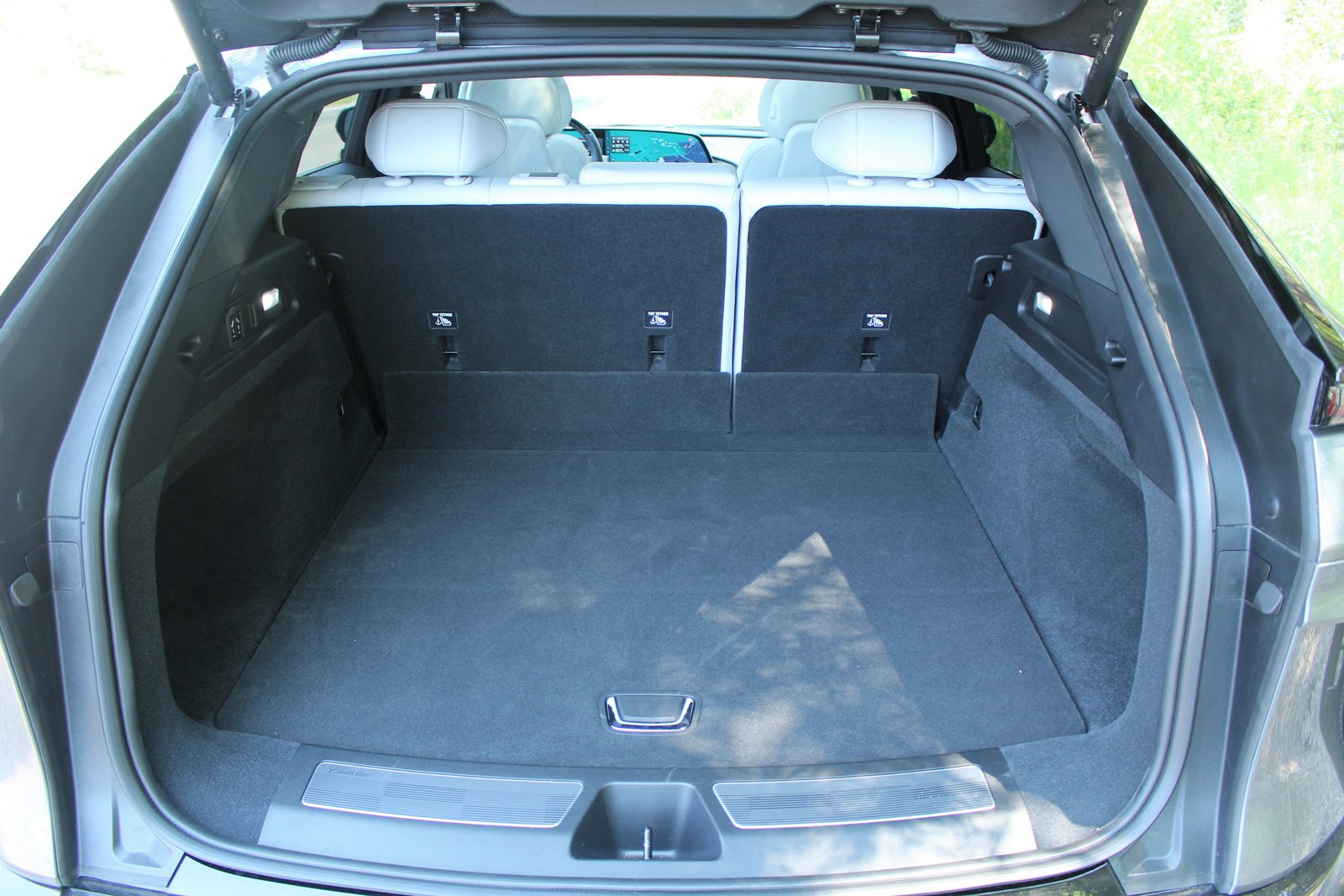 The 2023 Cadillac Lyriq’s cabin is particularly impressive. Not only is the design modern and elegant, but the crossover shares no buttons, switches or panelling with any other GM model, or any other Cadillac for that matter. The perforated and massaging leather seats look good and offer decent comfort, the chrome accenting has a quality feel to it, and all the switchgear is solid. The knurled air vent controls and infotainment rotary dial look as if they were plucked from a much pricier vehicle.

Speaking of infotainment, the Lyriq is equipped with a curved 33-inch LED display, and although other luxury cars may have equally wide panels, this one truly stands out because it’s one big screen from side to side—not two rectangular displays housed in a casing. Although big, it’s mounted low on the dashboard as to not be distracting when driving, and the navigation map can be duplicated in front of the driver instead of the usual gauge cluster. The system is amazingly easy to use, although we must get used to some controls now being only available on screen, such as the glove box release and the headlights—which most people just leave on automatic setting anyway. 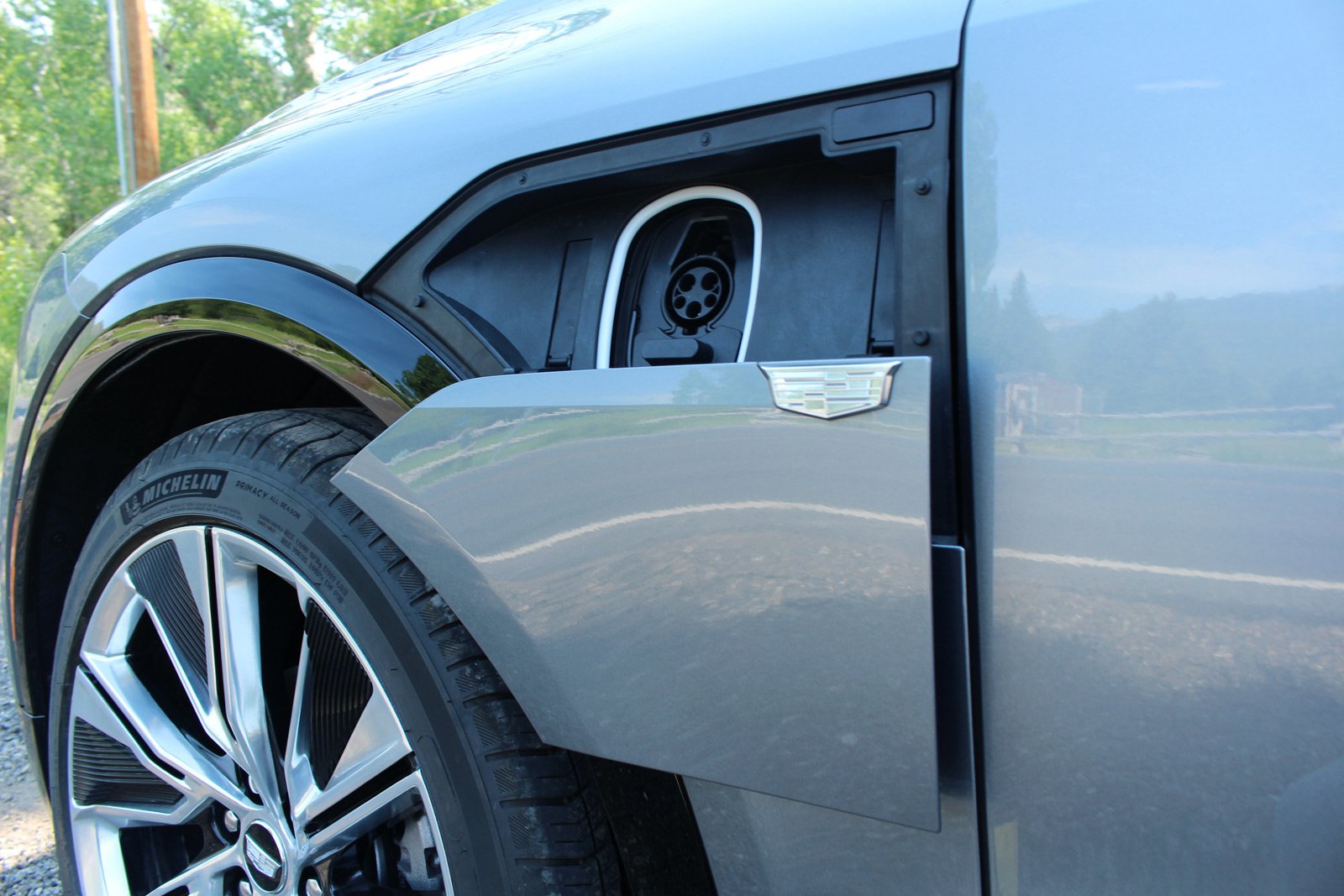 It’s worth noting that although the 2023 Cadillac Lyriq has plenty of tech gadgets, including configurable two-tier ambient lighting, some will be missing at customer delivery, but will added later on through over-the-air updates. A surround vision recorder is one of those features, as is Super Cruise, GM’s hands-free semi-autonomous driving system. The hardware is already installed, though. Updates will also add more features and improvements that have yet to be announced, so early adopters of the crossover won’t be left behind.

As for cargo space, the Lyriq’s rating of 28 cubic feet or 793 litres is beaten by the e-tron and the I-PACE, but once the rear seatbacks are folded down, the Cadillac redeems itself with 60.8 cubic feet or 1,722 litres, best among this trio of lux EVs. In addition, the cargo cover can be stored under the floor. The Model Y offers more max cargo space, though, and there is no front trunk. 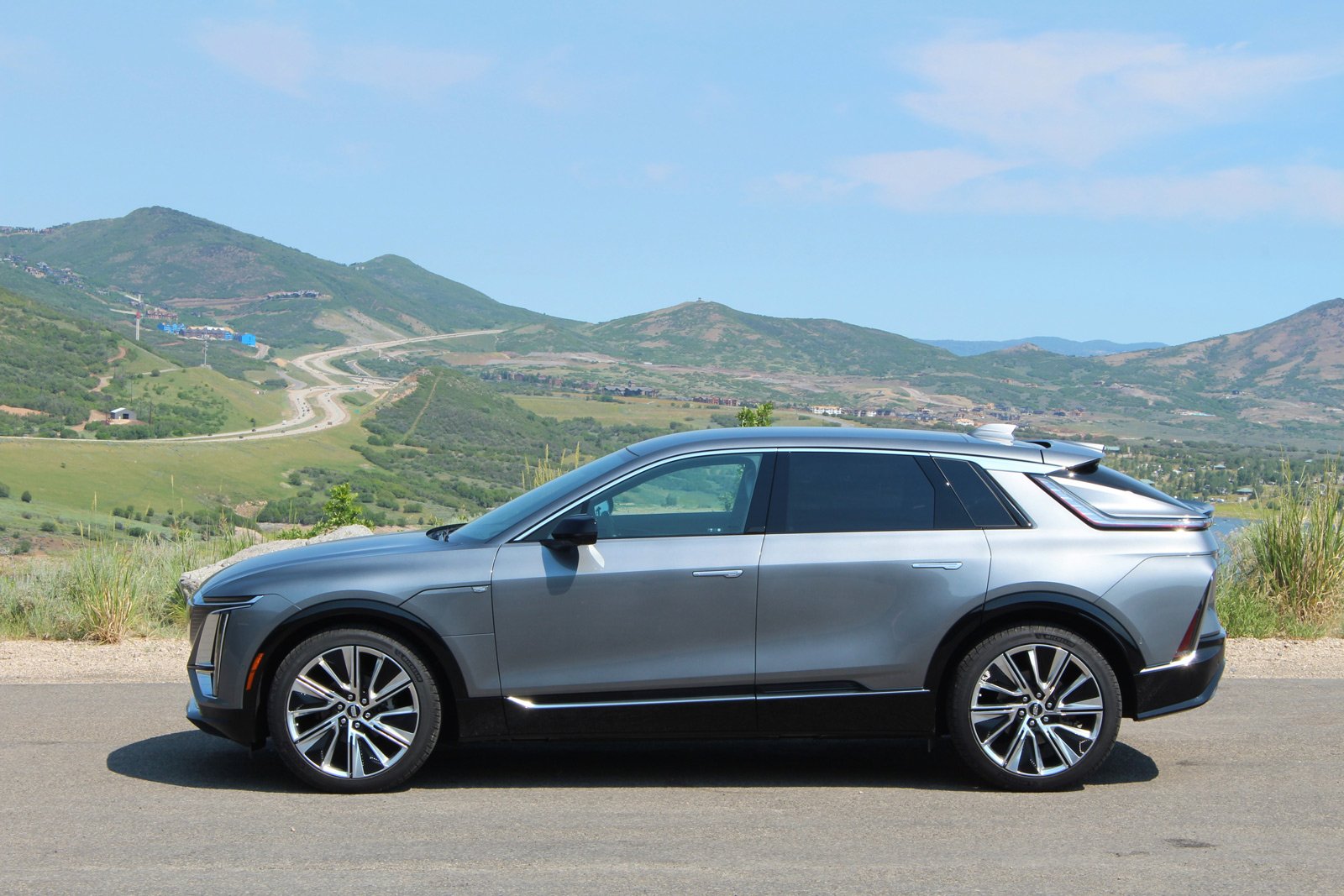 In the United States, pricing starts at $62,900, including freight and delivery charges, for the 2023 Cadillac Lyriq RWD, while the upcoming Lyriq AWD is listed at $64,900. In Canada, the Lyriq RWD starts at $69,898, and pricing for the AWD variant has yet to be announced. That makes it for affordable than all of its competitors mentioned above. Pricier and more equipped trim levels will likely be introduced for the 2024 model year, as the Lyriq is missing some features such as heated rear seats and rear climate controls, head-up display and other stuff we expect to find in this segment. A high-performance variant of the Lyriq could also be in the works.

There’s still a lot to be said about the 2023 Cadillac Lyriq, but an important thing to mention is that the 2023 model-year allocation is already spoken for, and new customers will need to get on a waitlist for the 2024 model. Cadillac’s first EV is stunning in the way it looks, feels and drives, especially for the asking price. Our only big concern is that all this new on-board electronics, infotainment as well as Ultium battery and powertrain tech has yet to prove its long-term durability and reliability. For now, those interested in the Lyriq should get on the waitlist sooner than later with a refundable $100 deposit.

The new 2024 Toyota Grand Highlander will likely squeeze in between the Highlander and Sequoia. It will be revealed in full on February...
Read more
Previous articleHyundai Teased the Production Version of the Ioniq 6 for the First Time
Next articleThe Ford F-150 Lightning is Recalled Over a Non-Compliance Issue

Might wagons make a comeback with the dawn of EVs? A few automakers have teased station wagon EVs. Volvo and Polestar, both under the...
Read more