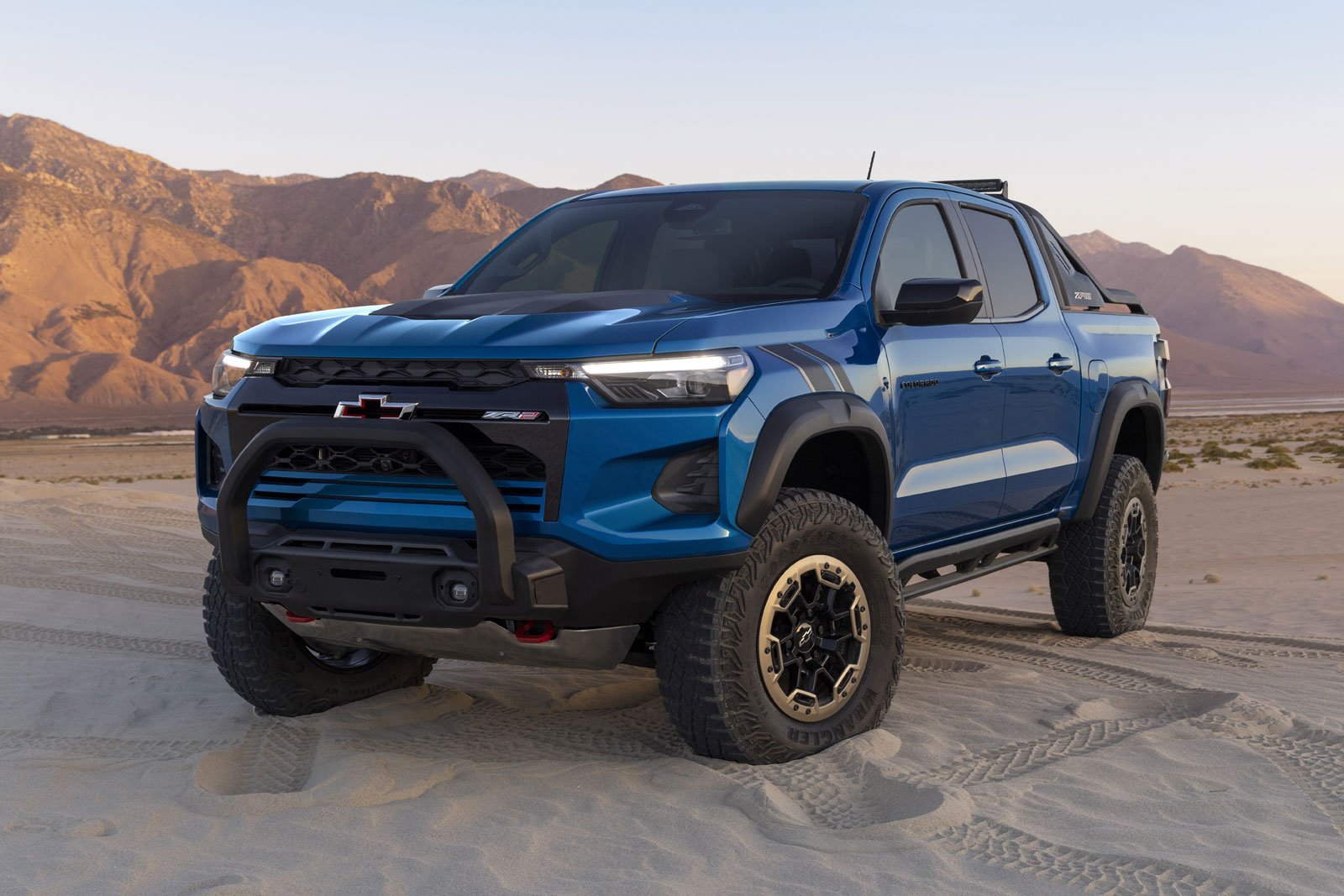 GM finally pulled the veil from the all-new 2023 Chevrolet Colorado, which benefits from a thorough exterior redesign, a new yet familiar trim level, three variations of a new engine, in addition to plenty of newfound on-board technology. 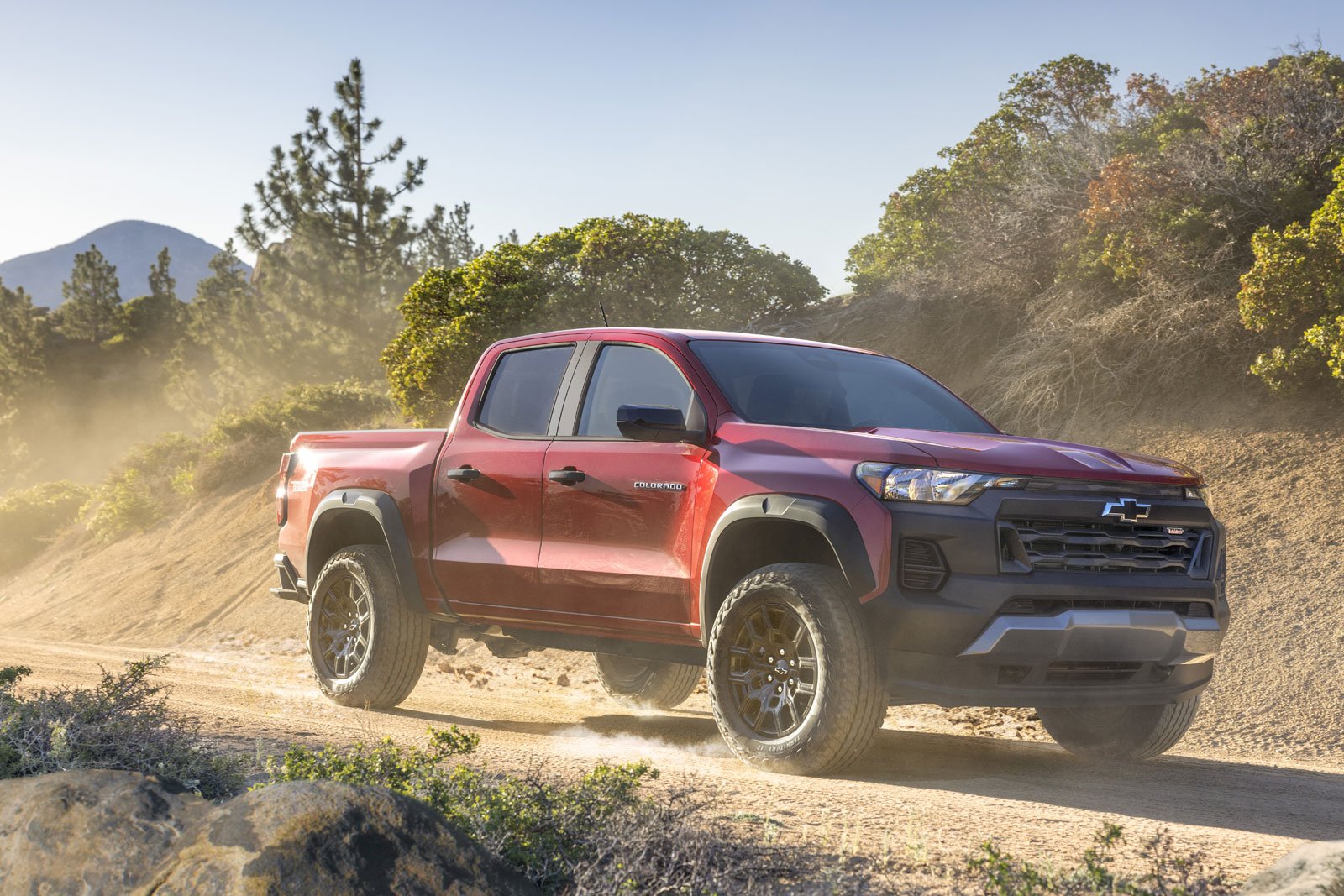 Re-introduced in the United States and Canada for the 2015 model year, after a three-year hiatus, the Colorado was Chevy’s answer for shoppers who needed the versatility and the look of a pickup truck, but in a smaller, more manageable package than the Chevrolet Silverado. Though adapted for U.S. and Canada, the current-gen Colorado was developed with foreign markets in mind, which partially explains why it lacks many upscale comfort and convenience features we’re used to seeing in today’s new cars and trucks. That’s all changed now.

To better compete with the Ford Ranger, the Nissan Frontier, the Toyota Tacoma and its GMC Canyon corporate cousin—which will also be redesigned—the 2023 Chevrolet Colorado is built on a heavily reworked chassis, but the wheelbase was extended by 3.1 inches or 79 millimetres by pushing the front wheels forward, while the wheels were slightly spaced out for a more muscular stance. Only the Crew Cab Short Bed variant has been retained, as the Extended Cab and Crew Cab Long Bed configurations are gone. The Extended Cab likely won’t be missed as its rear-seat accommodations were limited to a couple of thinly padded jump seats. Chevy has added more tie-down hooks in the bed, while the tailgate can be closed midway for hauling long objects, and a tailgate-integrated storage bin is available for storing tools or dirty items, for example. 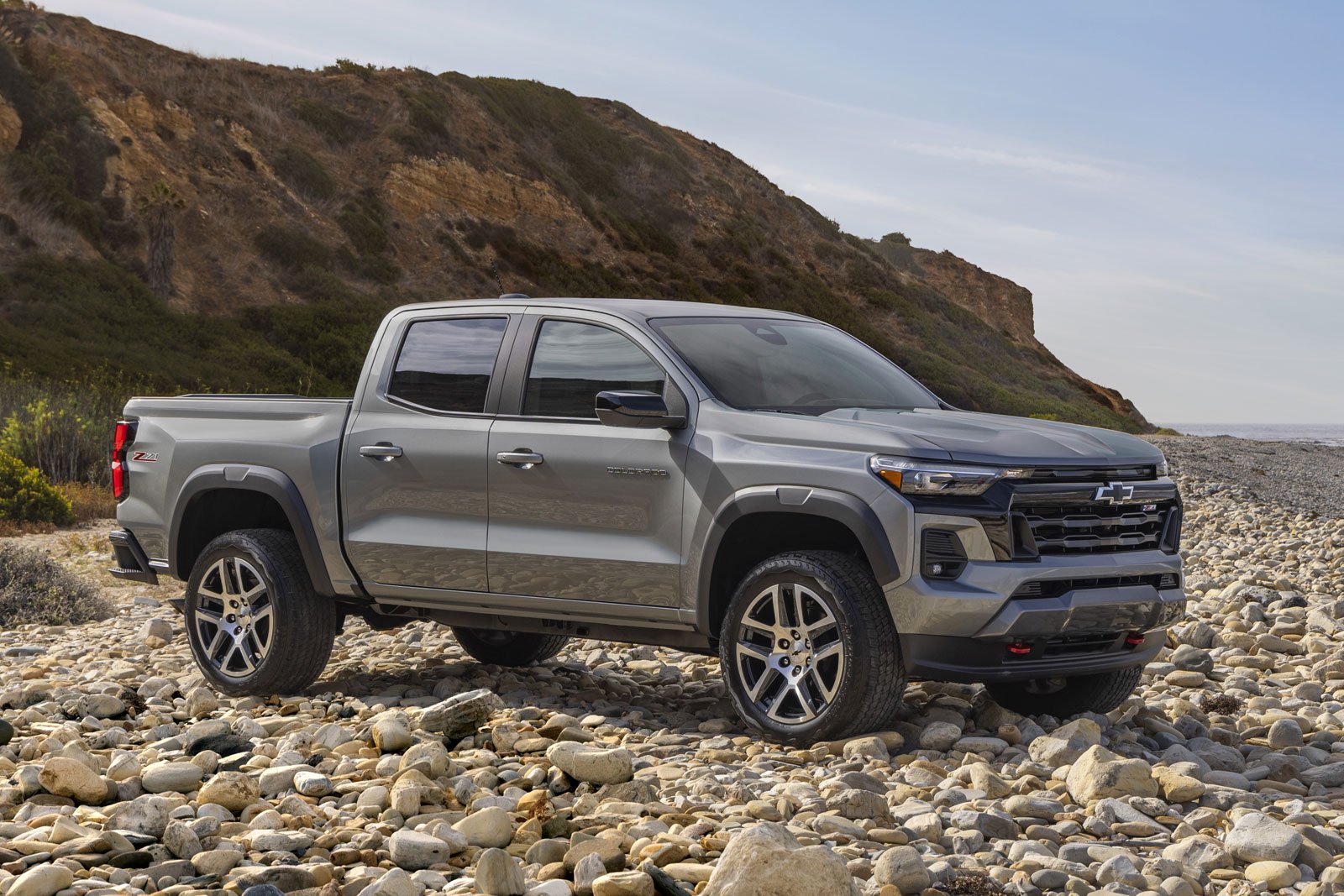 Five trim levels will be offered at launch. The WT is the utilitarian variant, but right above it is the new Trail Boss, offering a two-inch lift kit, off-road tires and a more rugged appearance, but limited to an essential set of features. A Trail Boss package was offered a couple of times over the current-generation Colorado’s lifespan, but now, it’s a full-fledged trim level, just like on the Silverado.

Next up, there’s the value-packed LT, followed by the Z71 with its lighter-duty off-road suspension and fancier look. Topping the lineup is once again the Colorado ZR2 with its three-inch suspension lift and trick Multimatic DSSV dampers, but there’s a newly available Desert Trail package, upgrading the ZR2 with beadlock-capable wheels, a sport bar with an integrated LED light bar, a unique front fascia with a brush guard and an underbody camera. Perfect for high-speed dashes through the desert, if there’s one nearby. 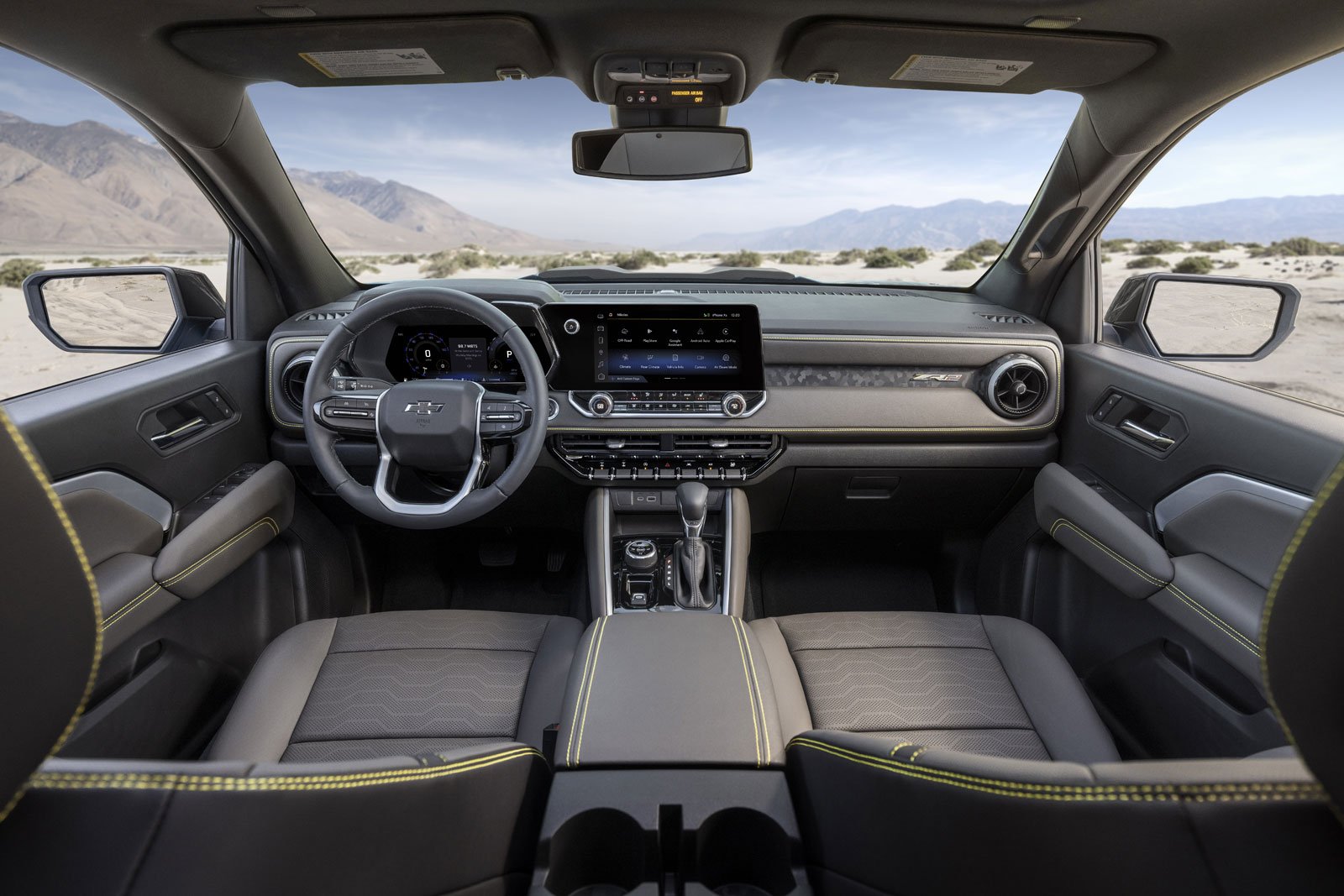 The outgoing generation offered a 2.5L inline-four, a 3.6L V6 and a turbo-diesel 2.8L four, and all three are gone. The 2023 Chevrolet Colorado gets a turbocharged 2.7L inline-four engine across the board, but with three different states of tune. The Colorado WT and LT get the least-powerful of the three with 237 horsepower and 259 pound-feet of torque, which is still better than what the old 2.5L engine could muster. Standard on the Trail Boss and Z71, optional on the WT and LT, the 2.7L Turbo Plus cranks out 310 horsepower and 390 pound-feet of torque—the latter being higher than the outgoing diesel engine. Finally, the ZR2 and the ZR2 Desert Boss get the 2.7L Turbo High-Output variant with 310 horses and 430 pound-feet.

All engines are matched to a new-generation eight-speed automatic transmission, which feeds power to either a 4×2 or 4×4 drivetrain. Fuel consumption hasn’t yet been announced, but GM said it would be about the same as the old base 2.5L inline-four—which itself wasn’t all that more efficient than the 3.6L V6. Towing capacity is rated at 3,500 pounds (1,588 kg) with the low-output 2.7L mill, and 7,700 pounds (3,493 kg) with the Plus and High-Output variants. A new trailering app allows up to 10 camera views. 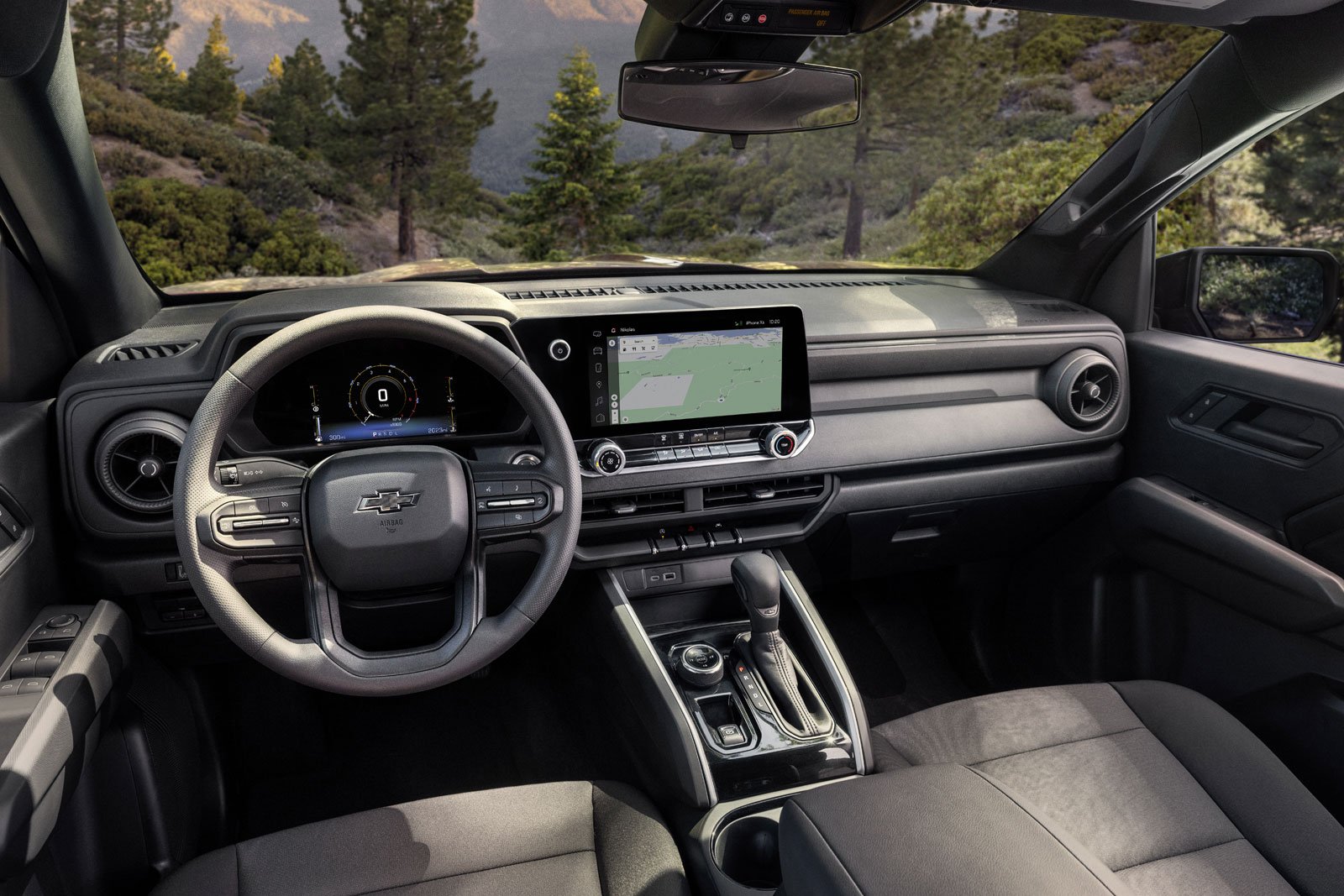 Inside, the 2023 Chevrolet Colorado gets an 11.3-inch infotainment touchscreen and an 8-inch digital driver instrument cluster across all trim levels, which is a major upgrade compared to the 7- and 8-inch screens in the current Colorado. It boasts Google Built-in software, while wireless Apple CarPlay and Android Auto integration is also standard. A power sunroof is now available on the Colorado for the first time. A drive mode system serves up Normal, Tow/Haul, Off-Road, Terrain and Baja settings, according to the chosen trim level. 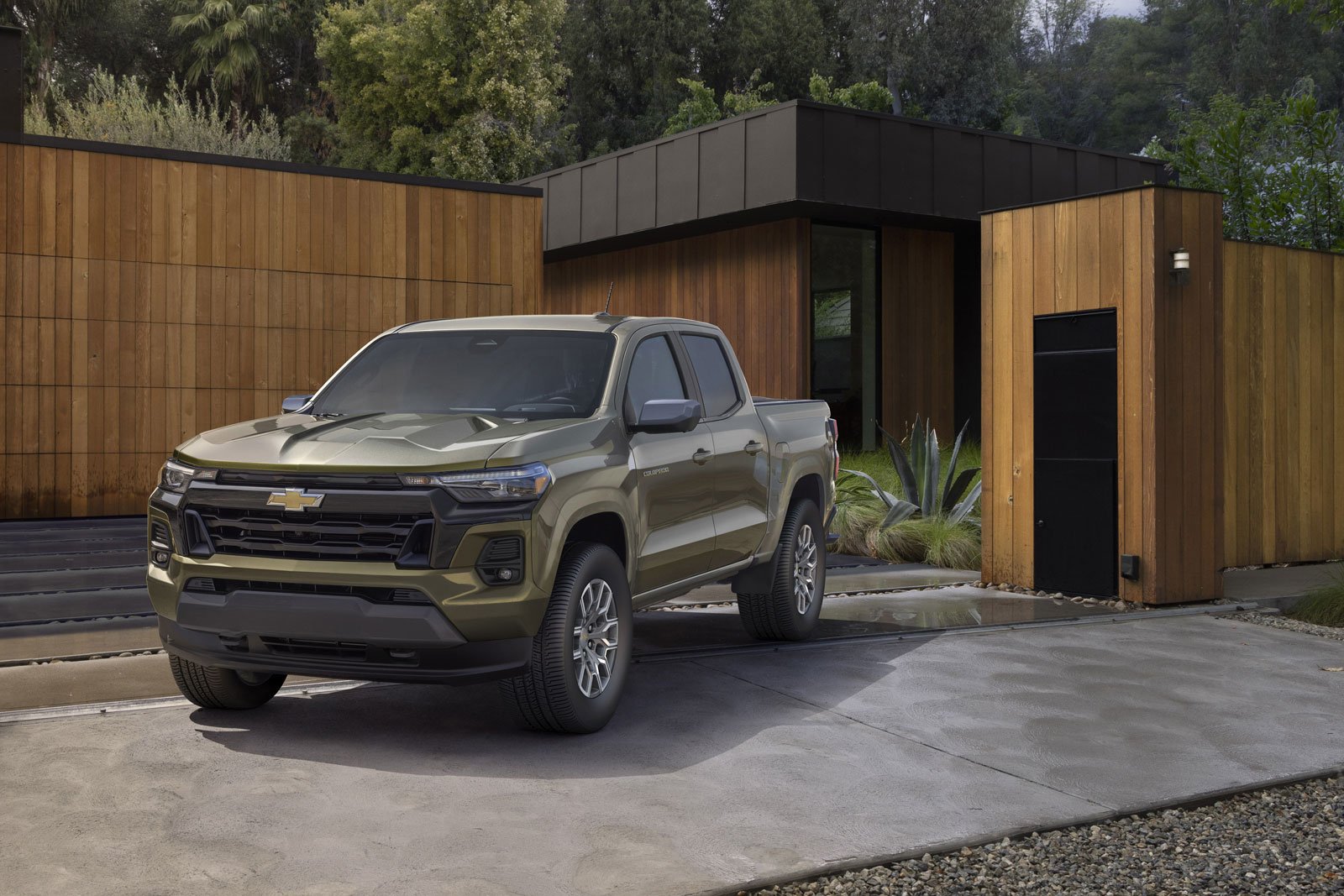 Production of the 2023 Chevrolet Colorado will start in early next year, and pricing will likely be announced closer to that date. With its new look, new powertrain and new tech, the redesigned Colorado is now armed not only for the rough stuff with three off-road variants, but the list of new creature comforts and safety features allow the new generation to take a giant leap forward in sophistication and appeal.

This includes all of the Optima models made in Georgia between late 2011 and late 2013 Parts of the headliner could detach upon...
Read more

$6,000 price increases, due to increasing costs Ford adding new tech and 10 miles of range to Lightning EV Ford will be reopening the...
Read more

This design could be either a next-generation electric XC90 or a refreshed current-generation model A recent trademark hints this model could be called...
Read more

The new battery is a 20-kWh unit, up from the previous version’s 13.8 kWh system. Total system output is up 40% from the...
Read more
Previous article2023 Toyota GR Supra A91-MT Edition Priced from $70,270
Next articleChevrolet now Has 150,000 Reservations for the Upcoming Silverado EV