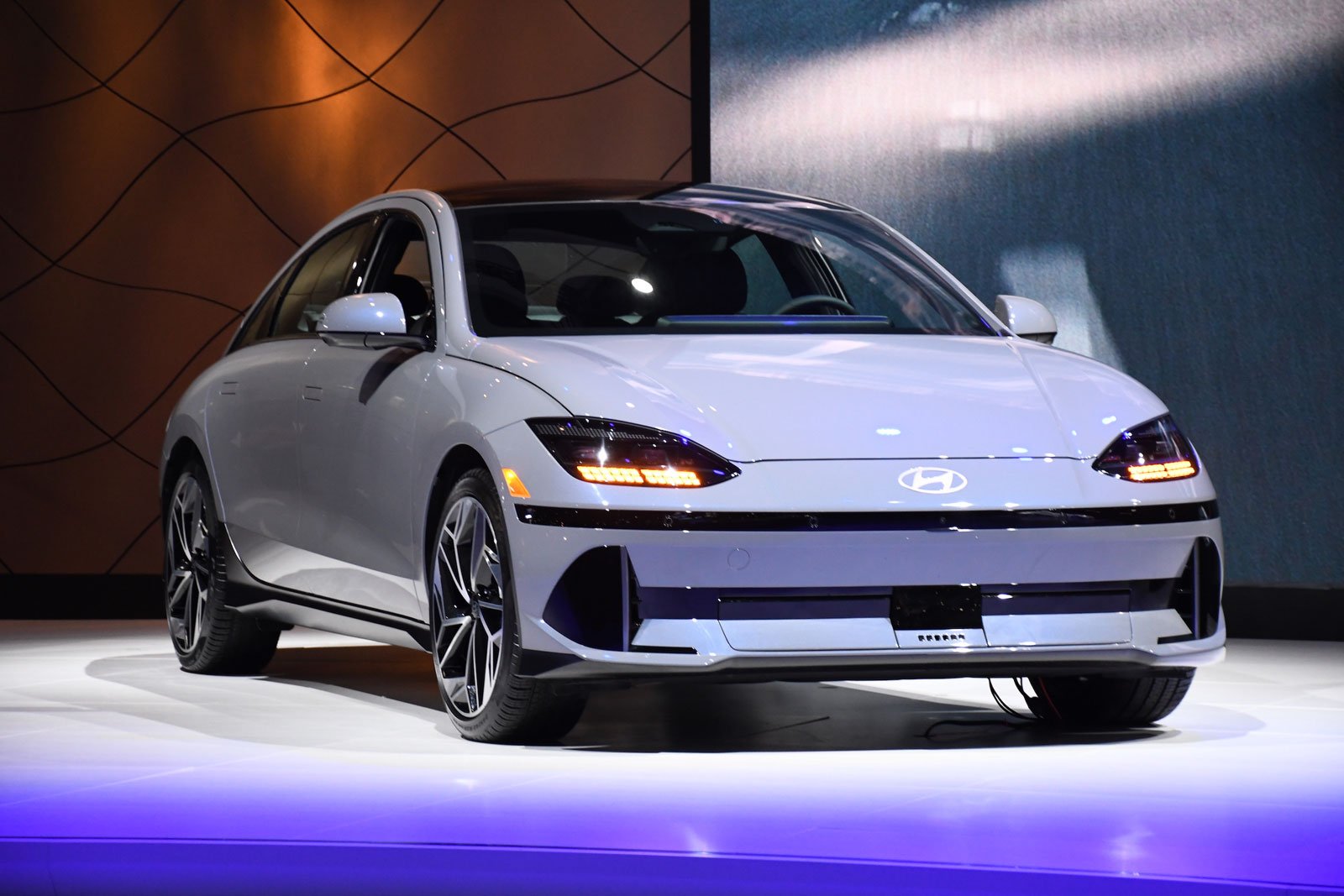 We’ve seen the Hyundai Ioniq 6 in concept form several times over the past few months, but finally, the production version has been unveiled at the Los Angeles Auto Show.

There are several things to get excited about with this newcomer, but perhaps the most interesting thing is that it’s a car. In a world dominated by SUVs, it’s reassuring to see that some manufacturers still believe in the automobile, literally. 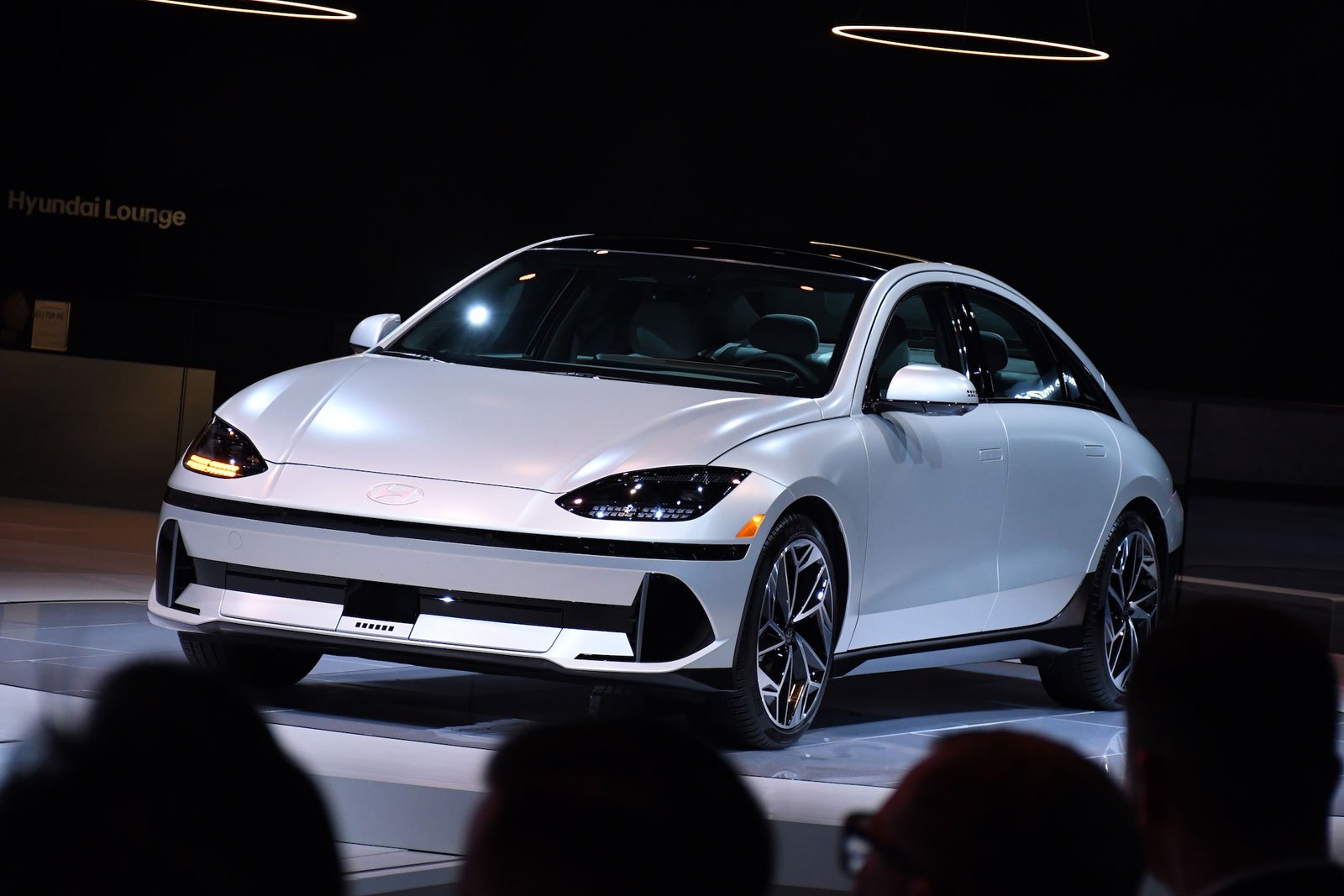 The 2023 Ioniq 6 is based on Hyundai’s E-GMP (Electric-Global Modular Platform), a structure that features an 800-volt architecture. For those who are less electrically inclined, most models take advantage of a 400-volt approach. What the extra capacity allows is even faster charging at Level 3 charging stations. And in the case of Hyundai’s latest EV, it’s pretty spectacular. With a battery at the right temperature, it will be possible to recover 80 percent of the vehicle’s range in just 18 minutes (with a 350-kW charging station). And if a driver only has 5 minutes to spare, it will still be possible to get 105 kilometers of driving range. 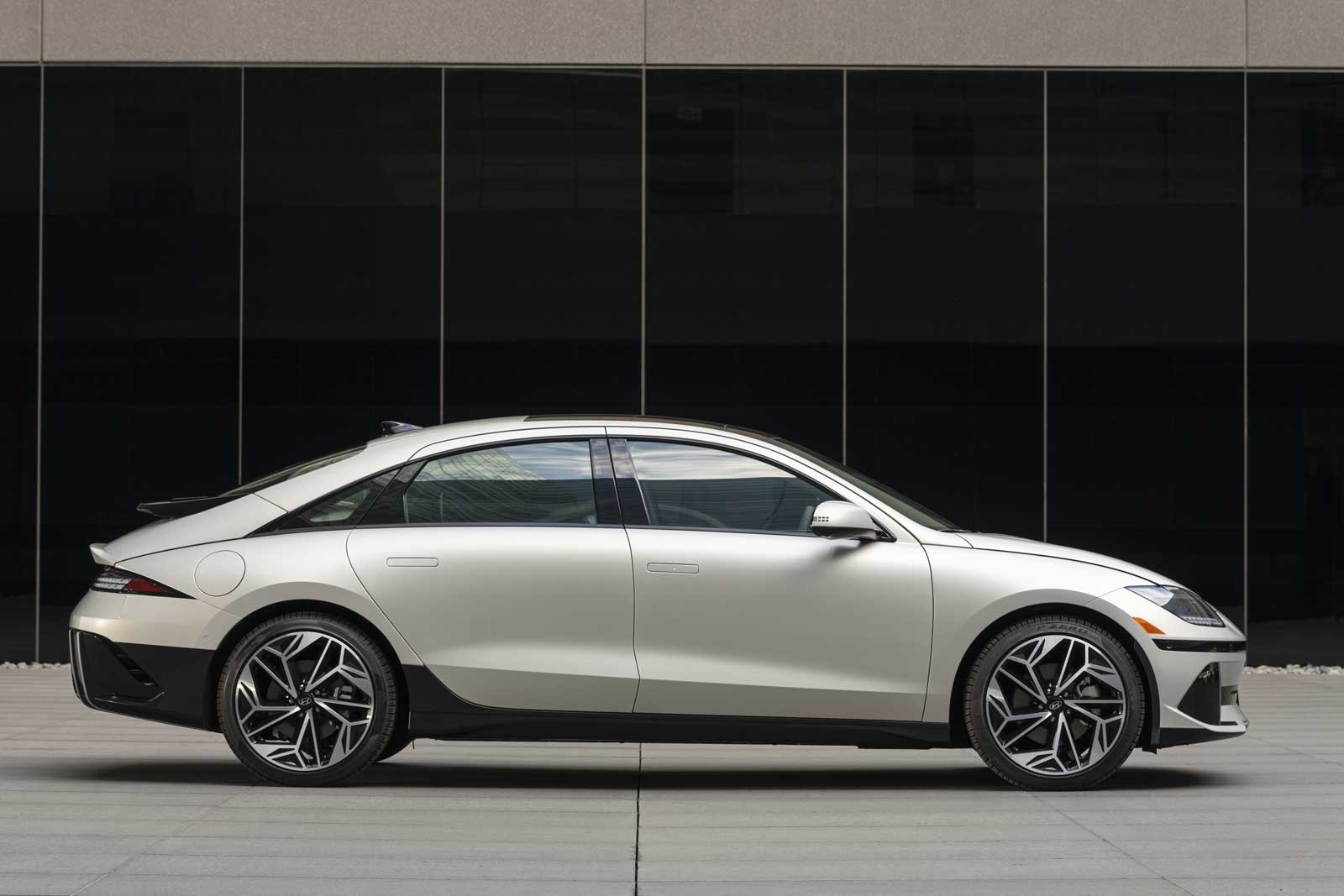 At home, with a Level 2 charging station and a 10.9 kW integrated charger, it will take 7 hours and 10 minutes for the charge indicator to show 100%. The vehicle will also be able to return energy to help charge appliances or run other stuff in the event of a power outage.

The other thing the E-GMP platform allows is to bring to life a product that delivers a very generous interior. With a 116-inch wheelbase and a flat floor, the Ioniq 6 offers an interior that is more than spacious; it’s welcoming. 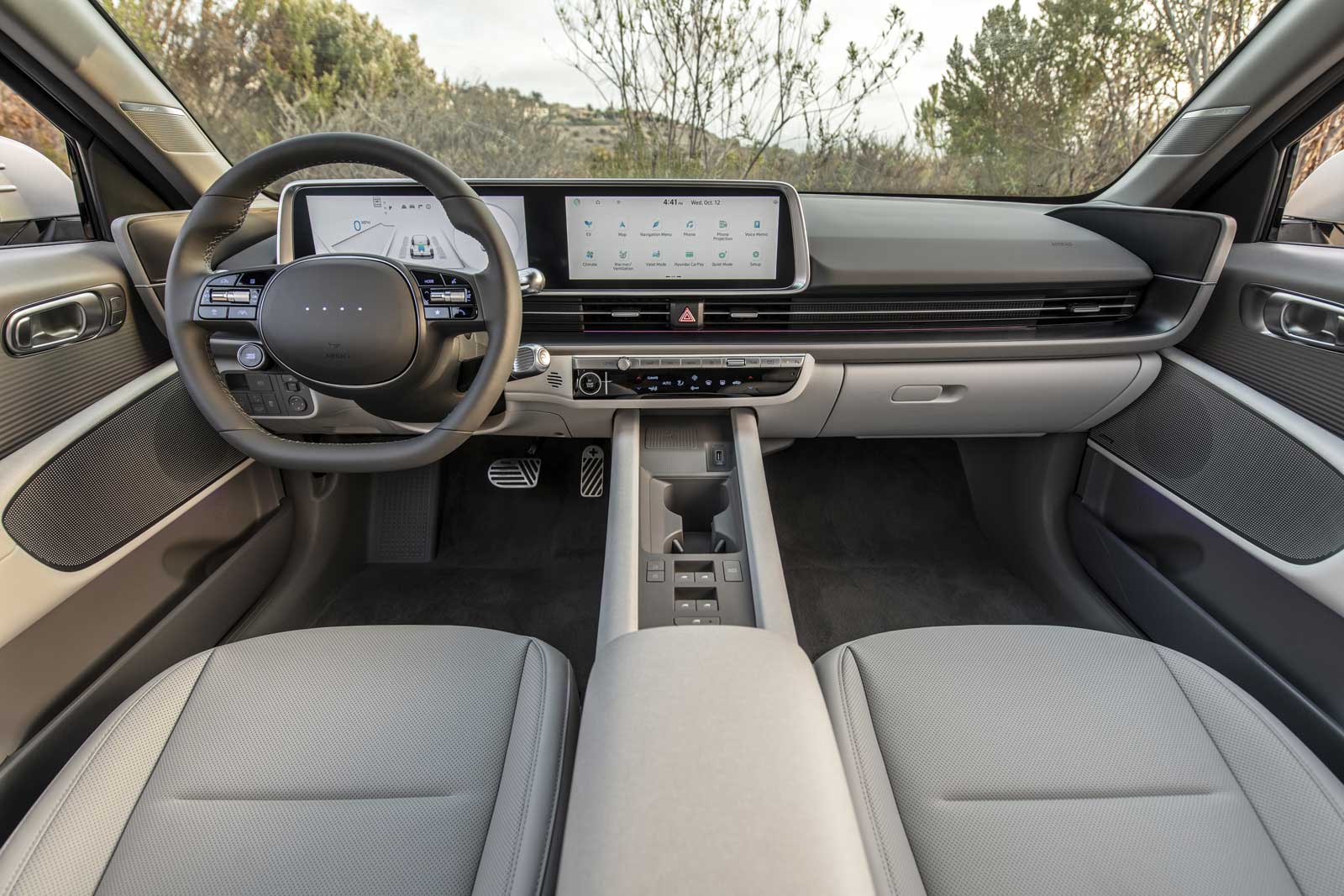 On the Limited version, which will sit at the top of the range, a power outlet will even be accessible inside for charging a computer, for example. This is in addition to the one available on the outside of the base model.

Two configurations will be possible with the 77.4 kWh battery. One can opt for a rear-wheel drive version (with a rear motor) or an all-wheel drive variant with an additional electric motor in the front. In the first case, the power will be 225 horsepower and 258 pound-feet of torque. Most importantly, the total range will be up to 547 kilometers (estimate). With all-wheel drive, power will be higher at 320 horsepower and 446 pound-feet of torque, but the range will be a little less. Still, it’s currently estimated at 499 km, which is still impressive. Moreover, this model will reach 100 km/h in under 5.0 seconds. 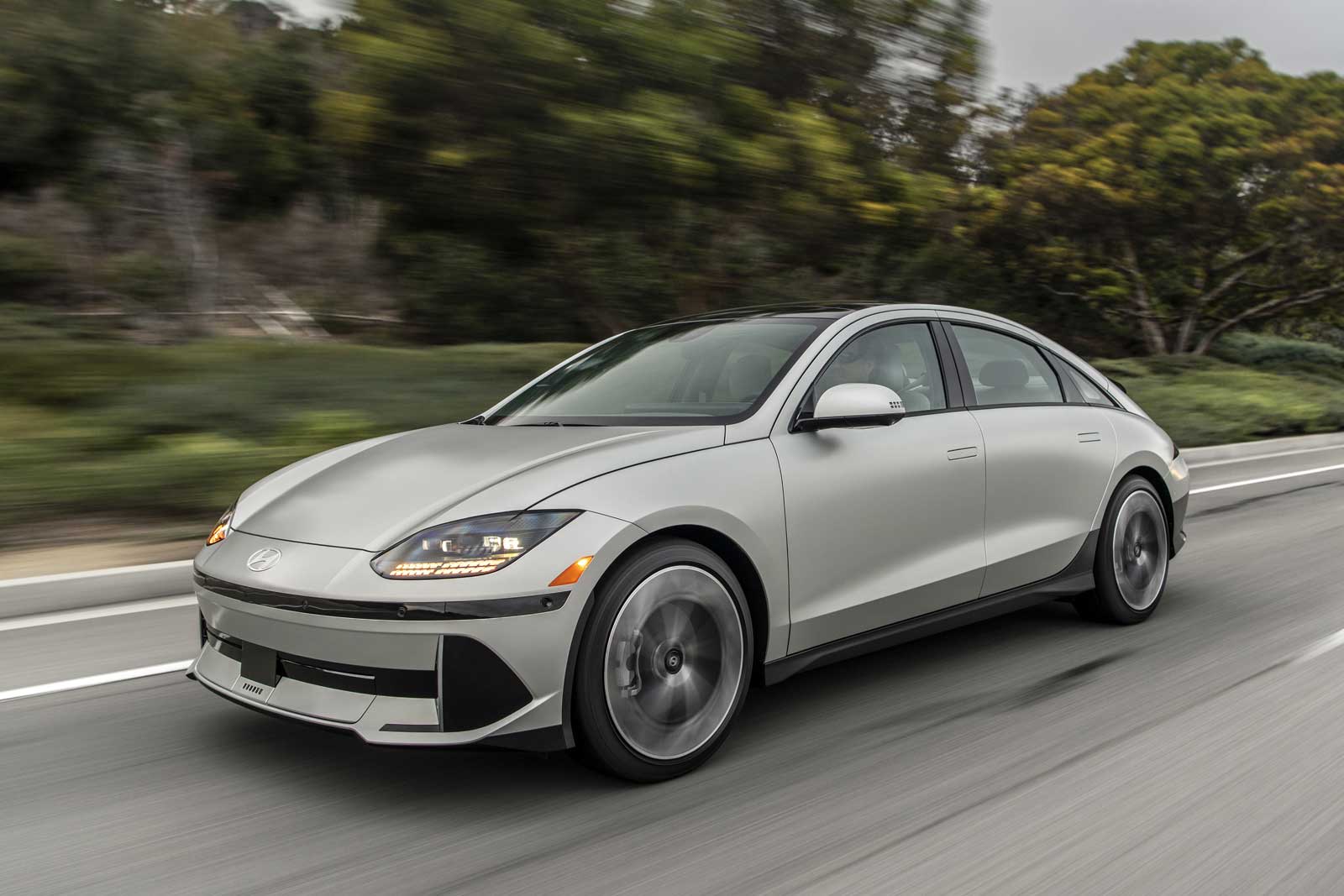 Inside, in addition to the generous space we mentioned, we find a modern and refined design. In front of the driver, there is a huge screen. In fact, this screen combines two 12.3-inch units; one for the instrument cluster and driving information, the other for the multimedia system, in the center of the vehicle. 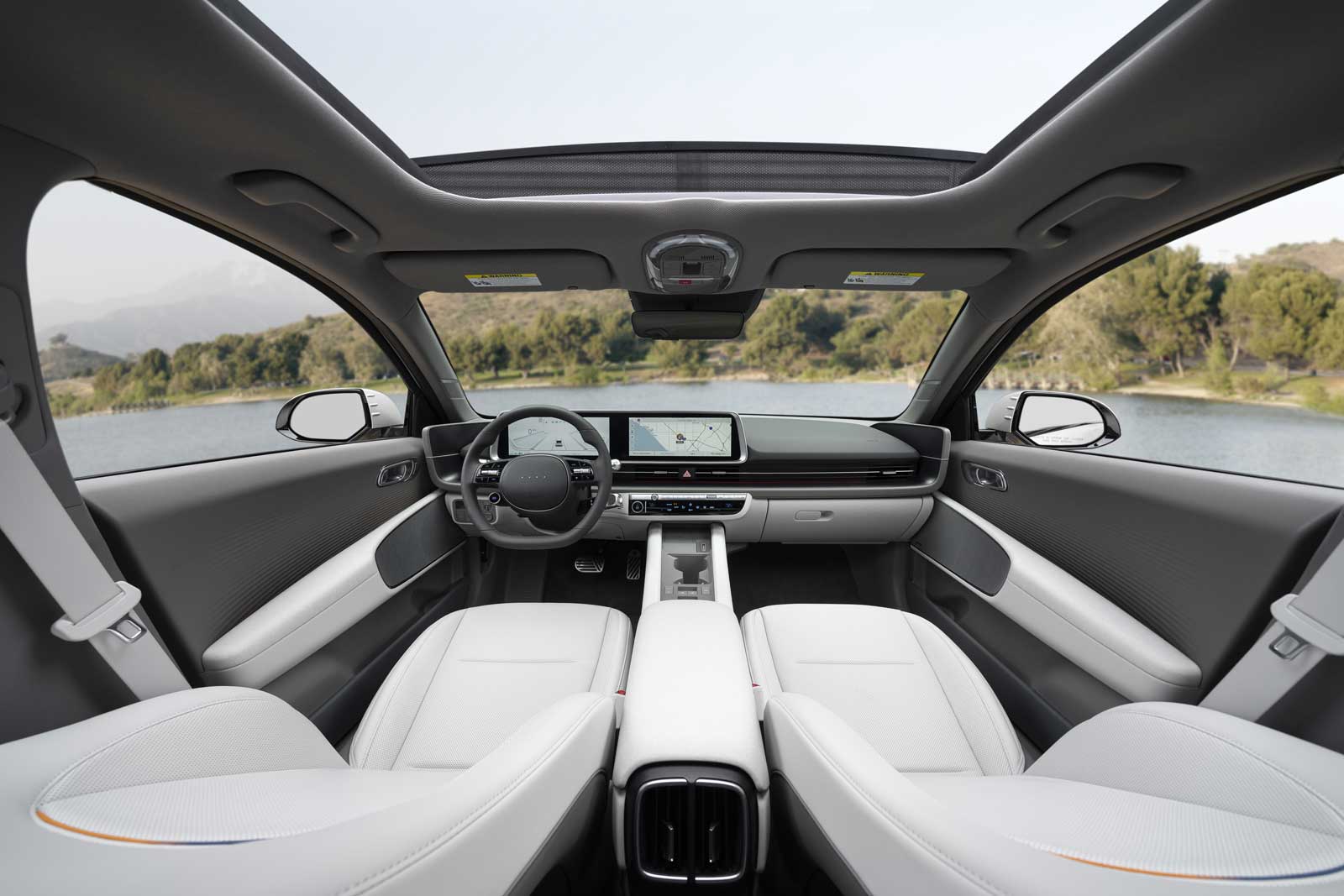 A closer look at the interior also reveals a bevy of eco-friendly materials. Hyundai talks about sustainability and responsibility; the theme is fashionable and appropriate to the philosophy behind electrification and the Ioniq 6 has a ton of green material inside.

Another interesting thing is that the interior presentation will be able to take advantage of different color combinations. In all, 64 colors will be suggested, as well as 6 two-tone themes. Hyundai mentions that everything was designed by color experts, no kidding. Is there such a thing as a color expert? Anyway… 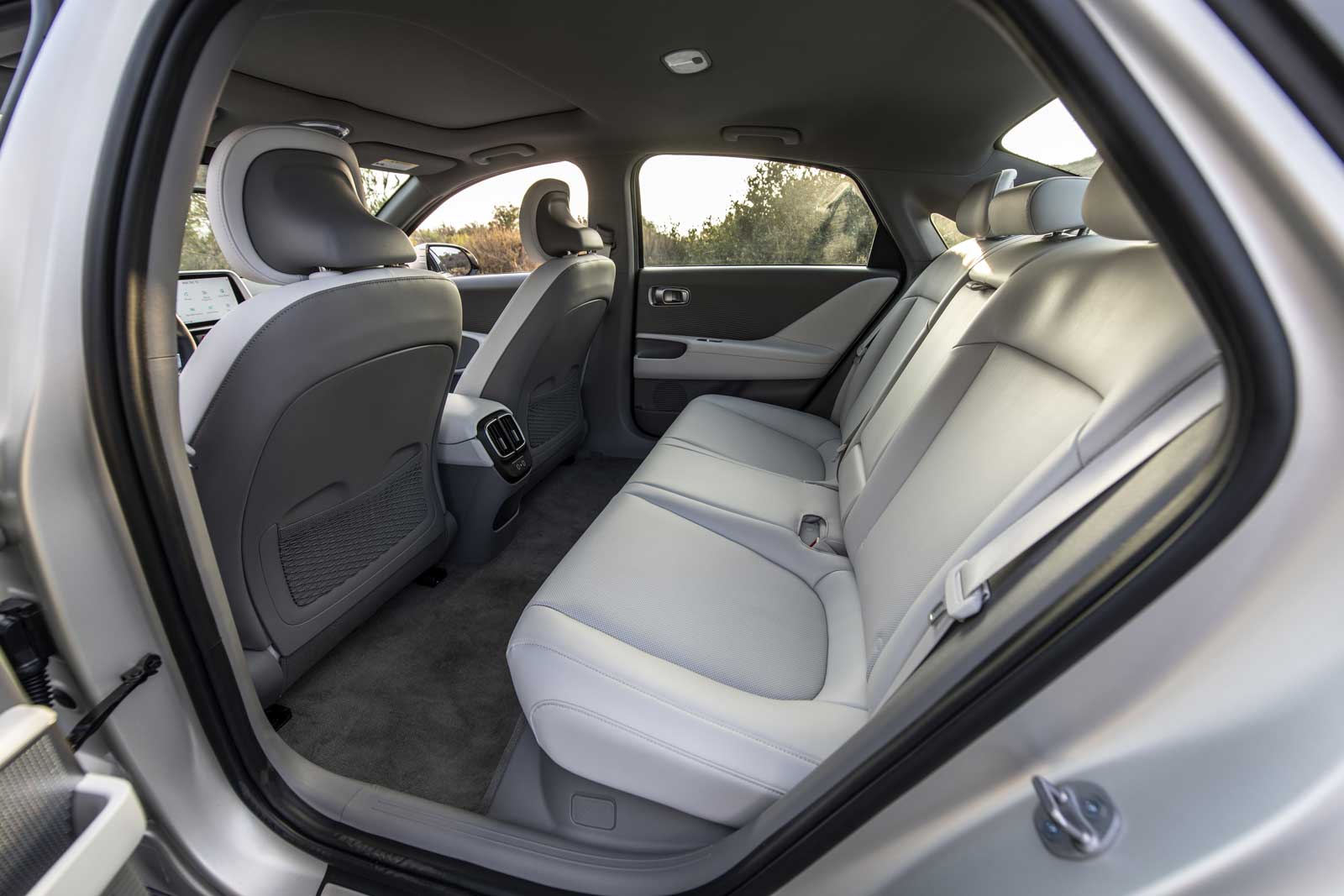 Speaking of colors, there are six that can drape the exterior. We won’t get into the esoteric names given to them, let’s just say they will be black, white, grey, blue, green and red. Inside, it will be gray or black.

Inspired by the Prophecy concept, the Ioniq 6 comes with a design that turns heads. We’ll let you judge, but it’s interesting to note what the company itself thinks about it. In fact, Hyundai explains why the lines of this Ioniq 6 are different from those of the Ioniq 5. It’s in line with the company’s firm belief that the style of a model should match the style of its owner. That’s why the distinctions are important between the two; they’re really not addressing the same person. 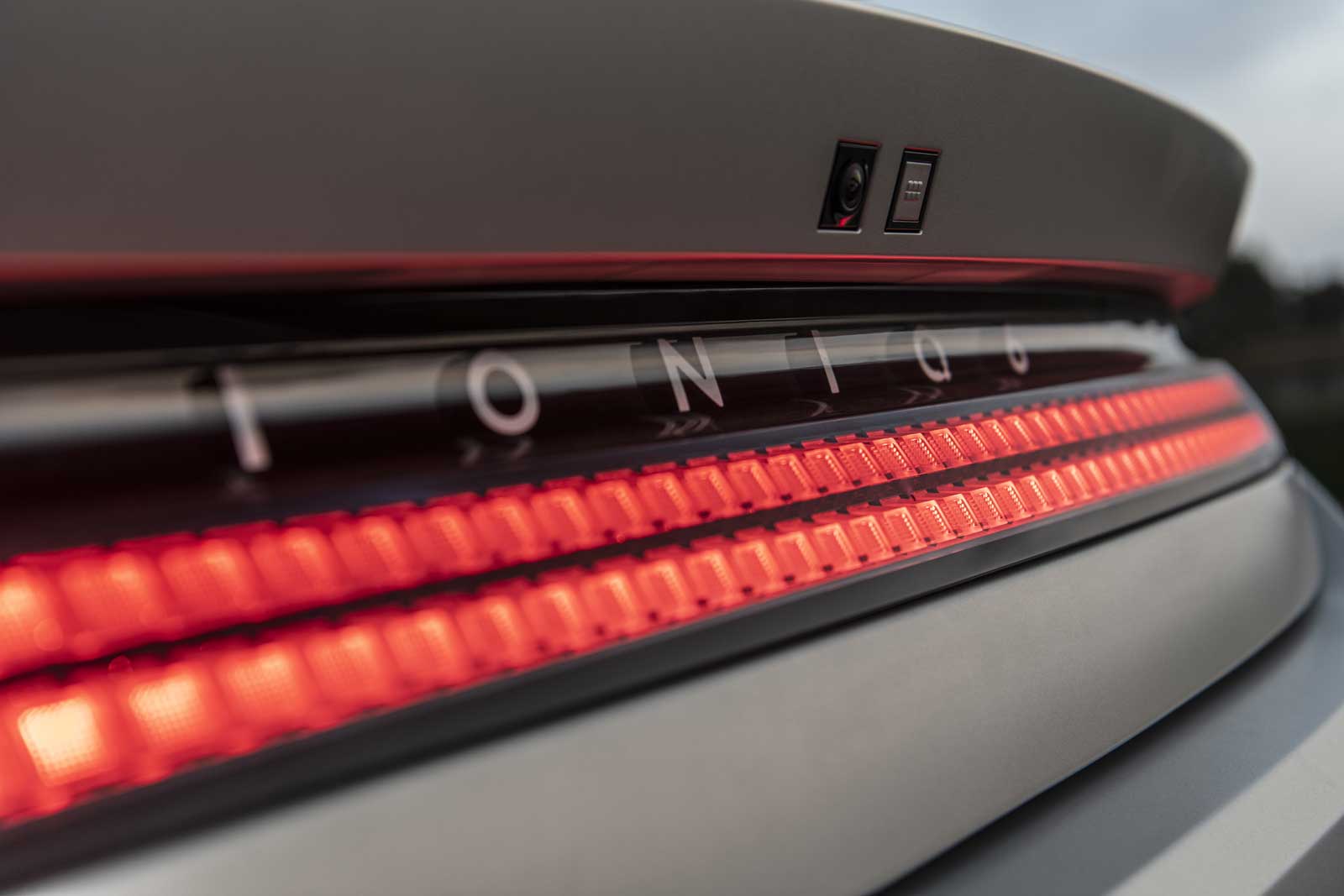 One element will tie the signature of the Ioniq designs together, however, and that is the use of parametric pixels. The Ioniq 6 has 700 of them, and they’re integrated just about everywhere, from the headlights to the taillights, to the center console and a wide variety of other areas Regarding these pixels, it’s funny to note that four of them are located on the steering wheel and light up when voice recognition is activated. They indicate, among other things, the state of charge of the vehicle.

Finally, one thing that definitely helps the range is the very aerodynamic design of the model. Its drag coefficient is an extraordinary 0.22cx. All of this is made possible, as Hyundai explains, “by a lowered front end, active air flaps, wheel arch reducers, a fender-inspired elliptical spoiler with end fins, a lightweight boattail structure, splitter flaps on both sides of the rear bumper, integral underbody protection, spoilers and reduced wheel arch dimensions.” 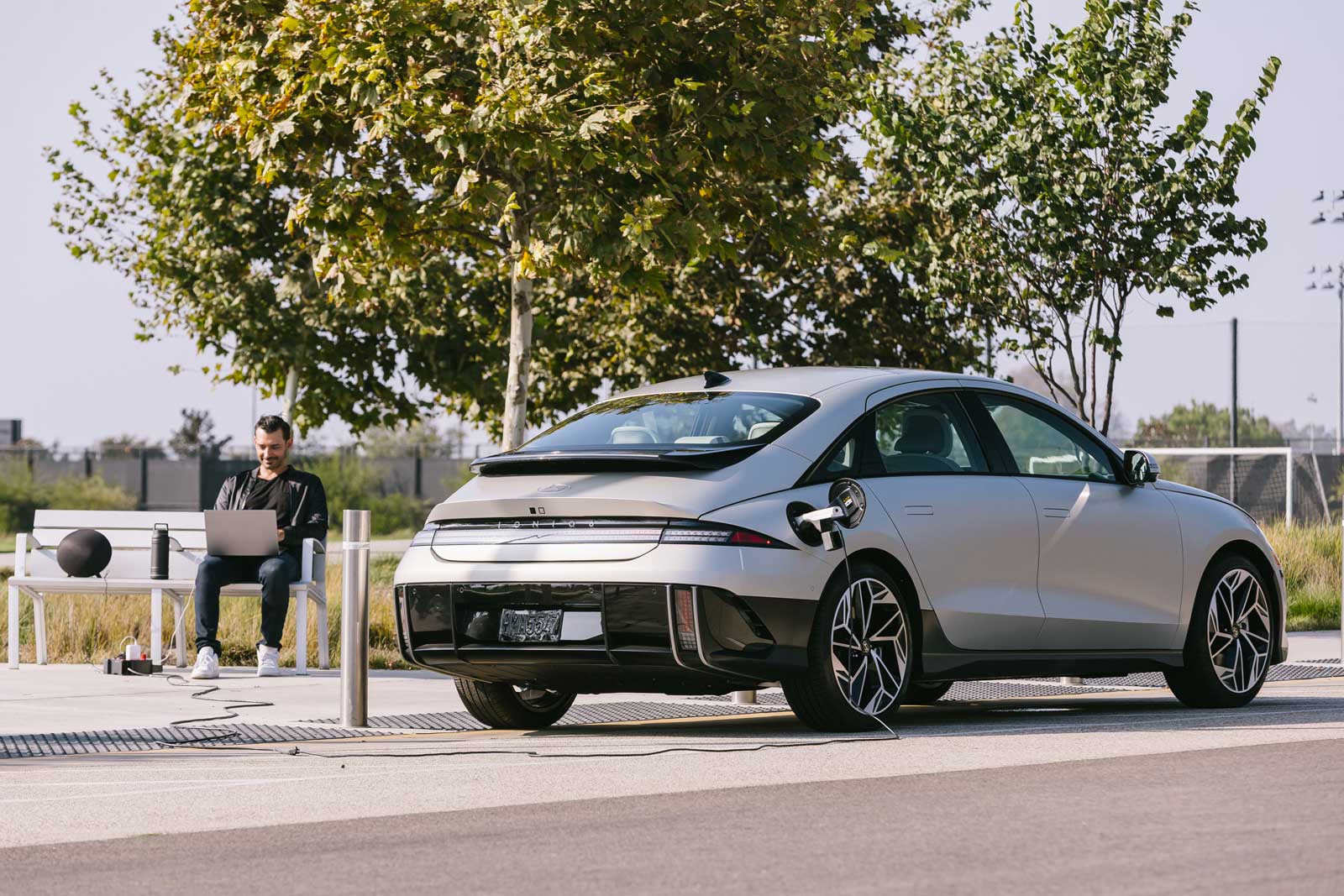 Of course, when it comes to driving experience, we’ll have to hold judgement until we have a chance to test drive the new 2023 Hyundai Ioniq 6. We are obviously promised something exciting and that’s fair enough. We’ll see in due course. We can tell you that the car will offer three driving modes (Eco, Comfort, Sport and Snow), as well as an electronic sound system when accelerating.

We could go on and on about the mechanical elements (suspension, all-wheel drive, brakes, etc.), but it will be more relevant to describe them and analyze their behavior after having tried the model. The same goes for everything related to safety and the Bluelink system that will allow over-the-air updates. 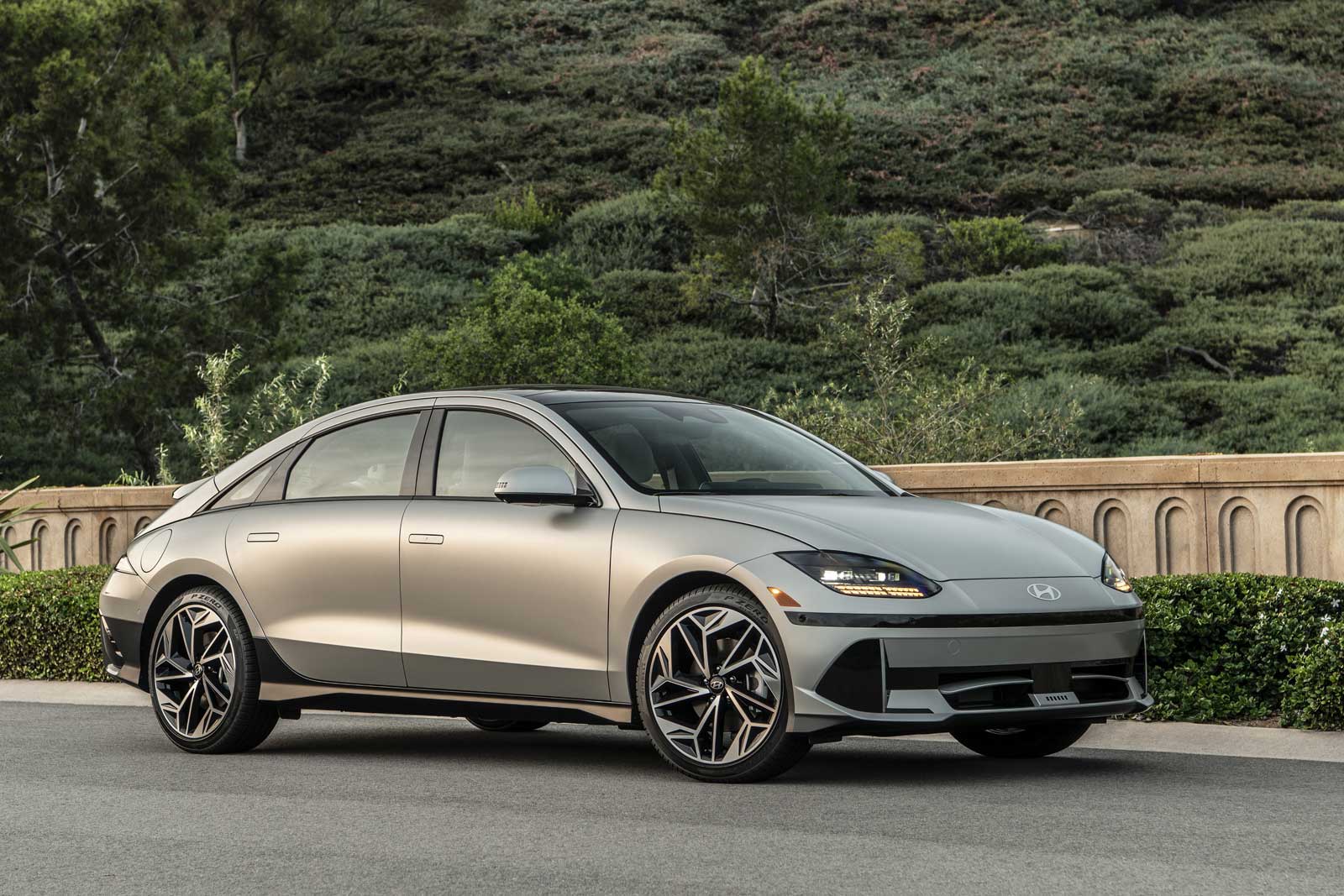 Hyundai is in the midst of a serious electrification offensive that will see the birth of 17 models by 2030. The Ioniq 6 is expected to play an important role, but it will be interesting to see how the public reacts here, as they seem to be only interested in SUVs. In Europe, the first 2,500 editions sold out in 24 hours. Maybe there’s hope.

The model is expected in the spring of 2023 and prices for Canadian versions will be announced shortly before. 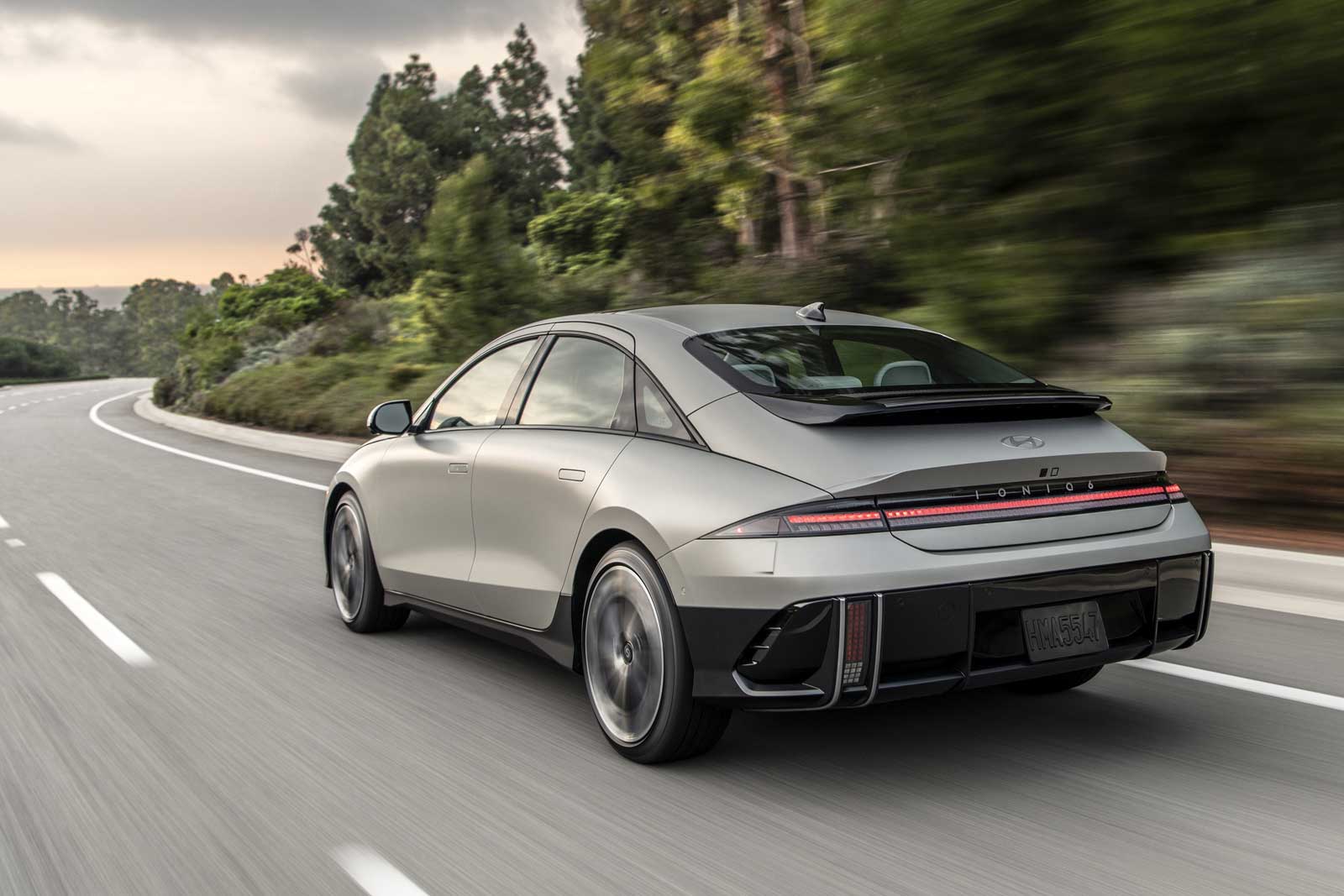 Hyundai will get batteries from SK On from 2025 New US EV plant expected to open that year Hyundai has signed a new agreement...
Read more
Previous articleToyota unveils the bZ Compact SUV concept
Next articleSay Hello to the New 2024 Subaru Impreza