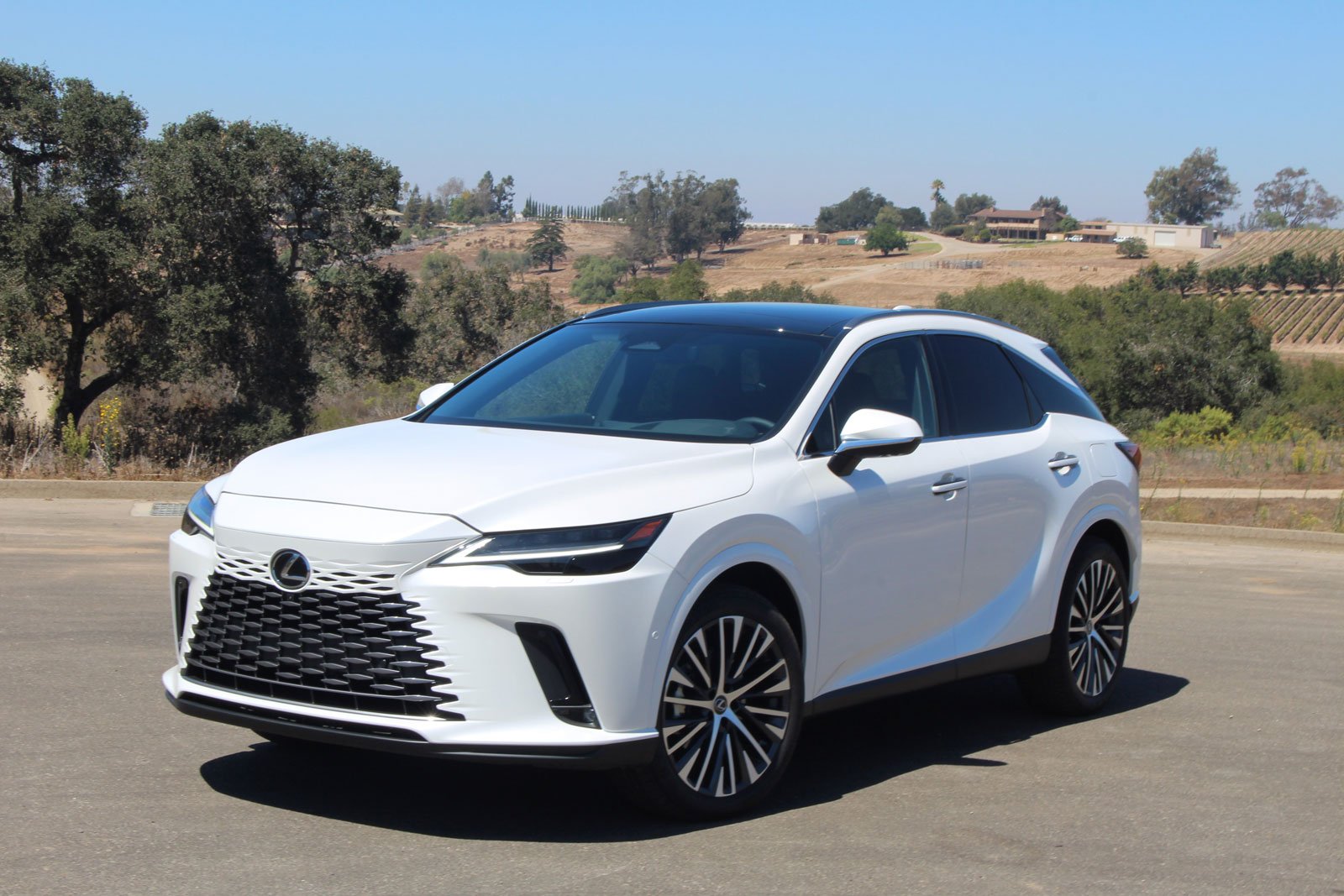 A late addition to the RX lineup.

How do you make a popular vehicle such as the RX even more appealing? By giving customers more choice, that is. The 2023 Lexus RX 450h+ introduces one of four new powertrains for the midsize luxury crossover.

Not only that, but the fifth-generation RX shares virtually nothing with the outgoing generation. It boasts the brand’s new styling direction, seeking to add emotion with more organic lines and an overall sportier character. There’s even a performance-focused variant called the Lexus RX 500h F SPORT Performance, positioning itself above the RX 450h+, the base RX 350 and the hybrid RX 350h. 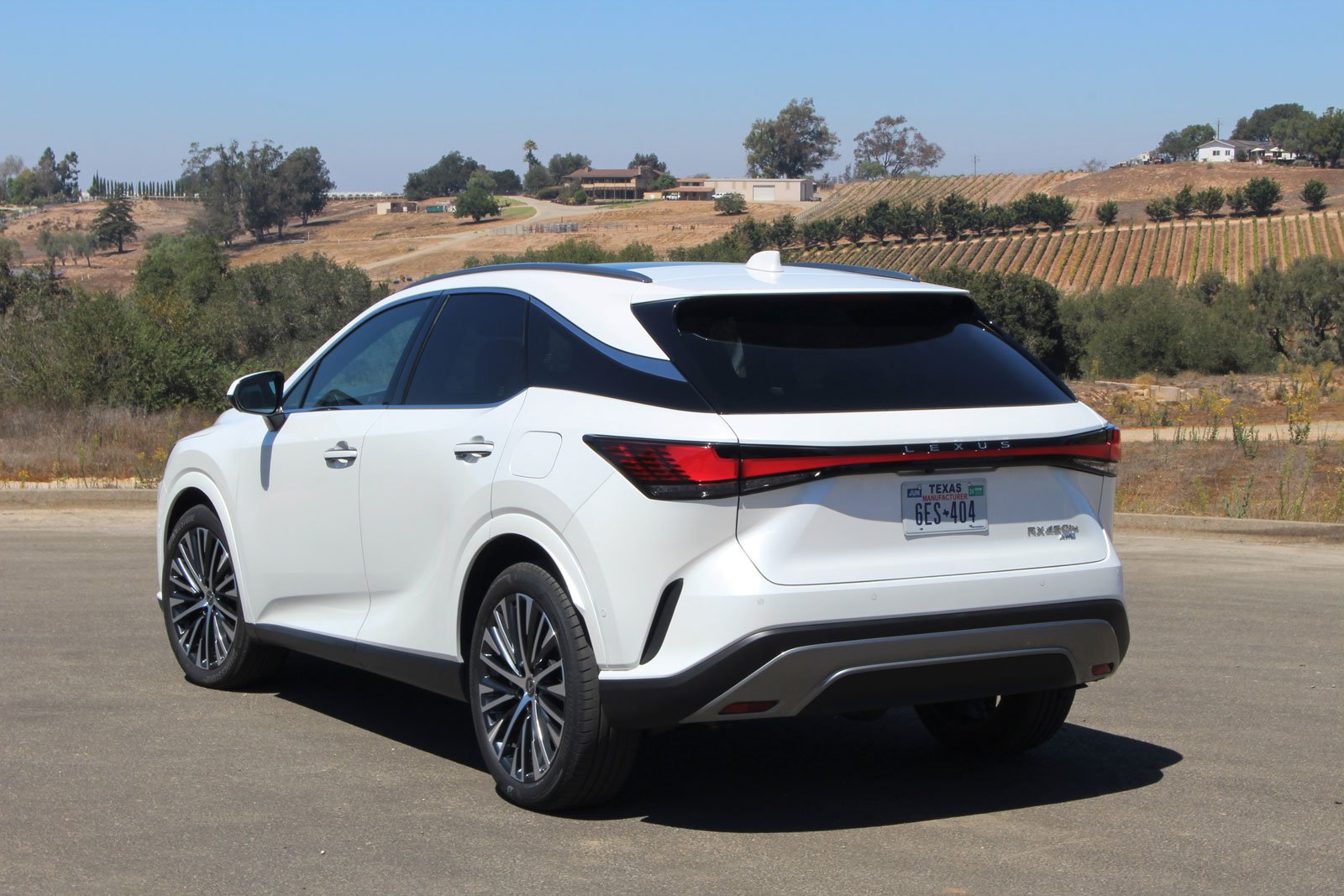 It’s worth noting that the 2023 Lexus RX 450h+ will arrive later in the model year, after the other three variants. The company will send these units to other countries first, where more plug-in hybrid vehicle are required to comply with local emissions regulations. But we’ll eventually get it.

In the meantime, the company isn’t sharing any specific details about its powertrain, other than it being similar to the RX 350h’s. That means it rounds up an Atkinson-cycle 2.5L inline-four with two motor/generator units up front, and a rear-mounted electric motor to create an all-wheel drivetrain. The RX 350h develops a combined 246 horsepower, but the RX 450h+ gets a more powerful rear motor, so the horsepower count should be more than the Lexus NX 450h+’s 302 horsepower. 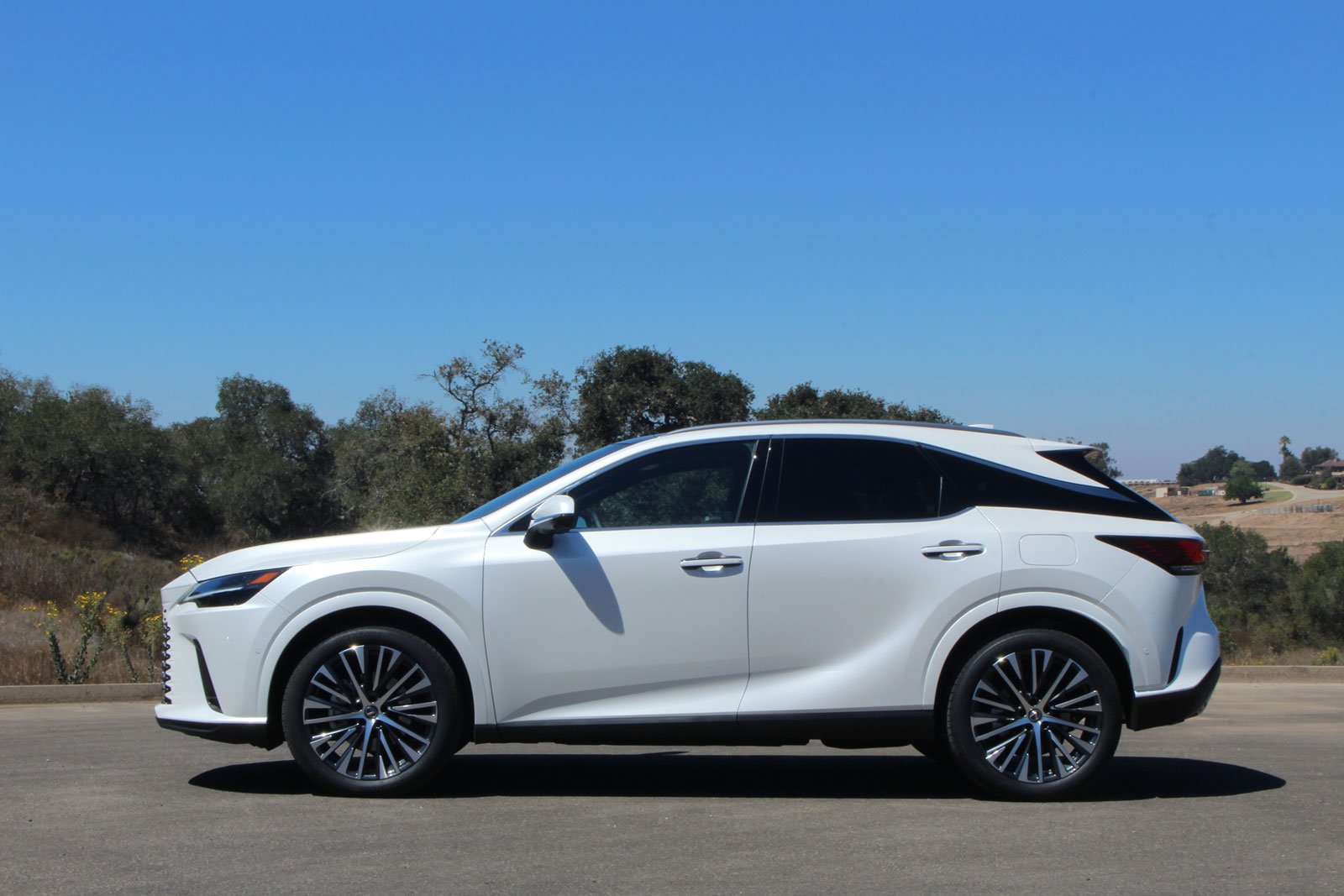 During our brief drive, we found that the PHEV variant is actually pretty fast—almost as energetic as the 366-horsepower RX 500h. In fully electric mode, the crossover is obviously not as quick to accelerate, but effortlessly manages to get up to speed, thanks to the powerful electric motors. There’s also a charge button on the centre console for regenerating energy while we drive, or for conserving our battery charge on the portions of our drive where it would be unnecessarily wasted—on the highway, for example. 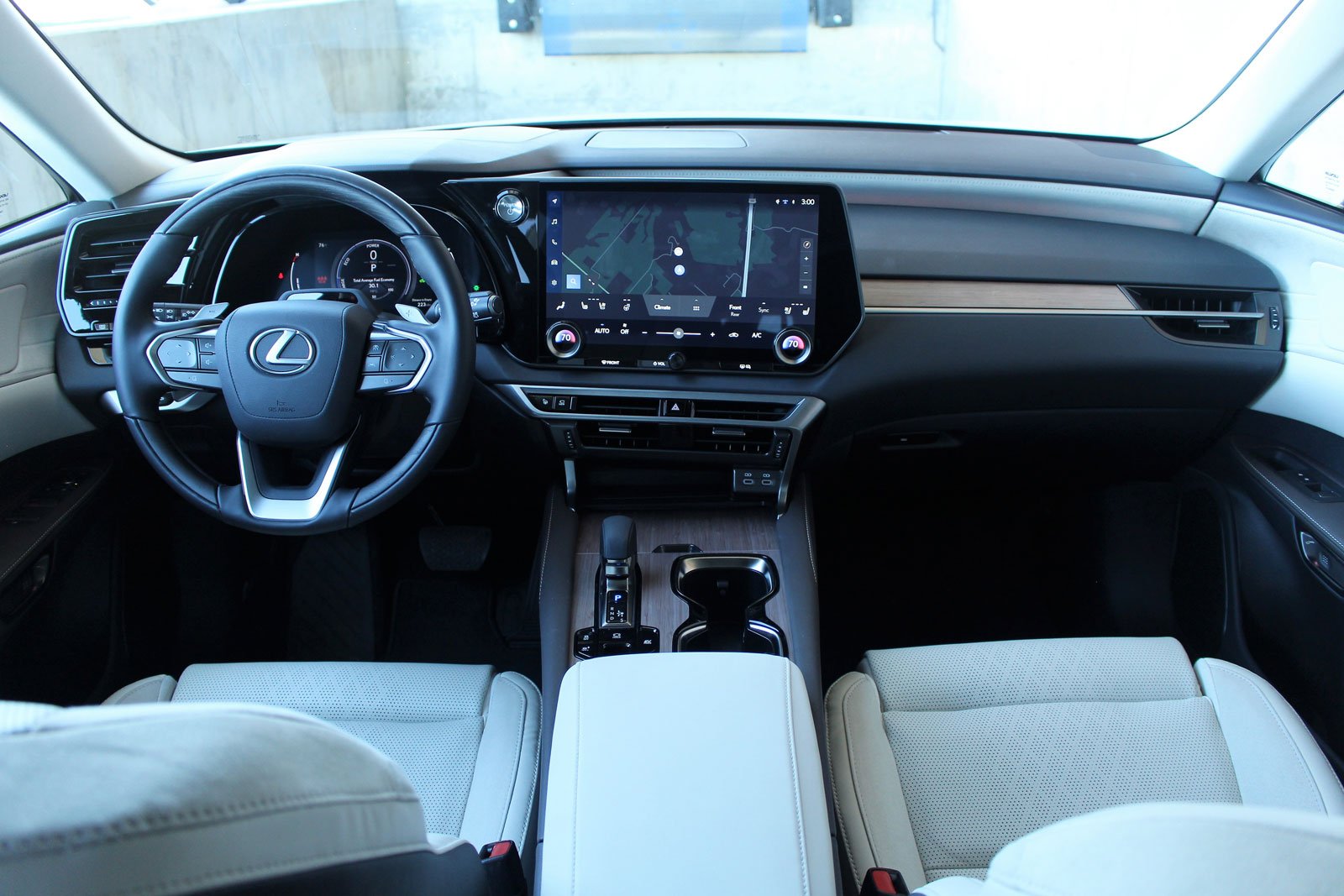 Besides the liftgate badge and the charge port door, there are no visual distinctions between the 2023 Lexus RX 450h+ and the RX 350h, although the former likely gets a different alloy wheel design. Same goes for the interior, which has been fully redesigned and boasts an all-new infotainment system that’s being fitted to every new Lexus model. The system is matched to either a 9.8- or a 14.0-inch touchscreen, although we’re fairly confident that once the RX 450h+ hits the U.S. and Canadian markets, it will only be available with the bigger display. As with the other RX variants, the unmarked buttons on each steering wheel spoke, whose functionality varies according to the chosen menu (cruise control, trip computer, audio, phone), are only indicated on the head-up display when we set our thumbs on them. It’s just complicated and distracting for nothing.

What’s also unclear as this point is if the PHEV will be offered with as many configurations as the RX 350h. The latter gets Standard, Premium, Premium+ and Luxury packages in the U.S., while Canada skips the base package. The RX 450h+ might only get one or two uplevel packages, but we’re just speculating here. 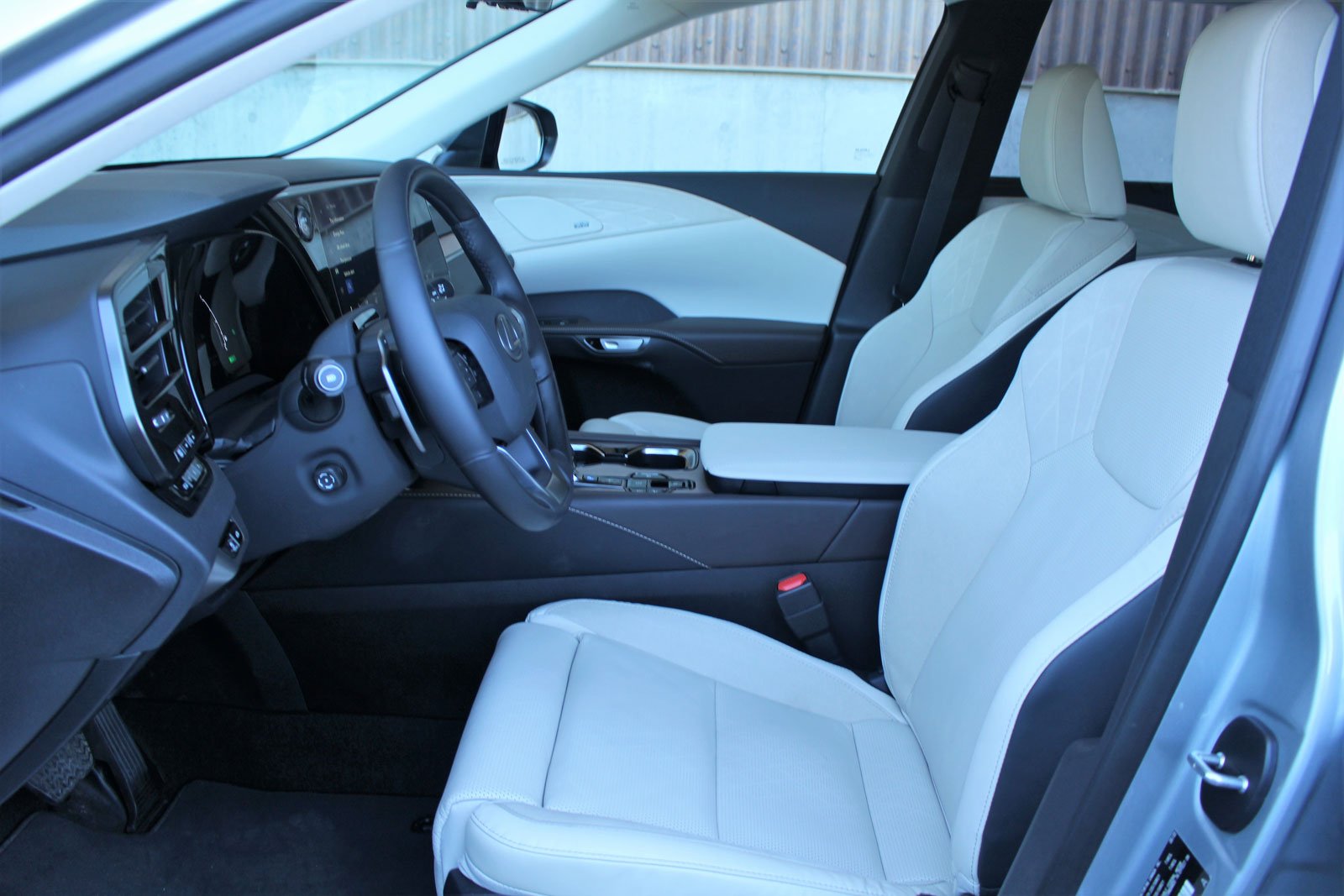 The 2023 Lexus RX 450h+ should arrive over the course of the 2023 calendar year, and will represent an interesting addition to the RX lineup. It offers a higher level of performance than the RX 350h and what we expect to be similar fuel economy, without the sharper handling and more aggressive appearance of the RX 500h.

The Renault-Nissan-Mitsubishi alliance has been rocky for many years. Renault will cut back its stake in Nissan, while both Japanese companies will take...
Read more
Previous articleVolkswagen Unveils the ID. XTREME, an Off-Road Concept Based on the ID.4 GTX
Next article2023 Lexus RX 350 and RX 350h First Drive Review: Improving a Winning Recipe