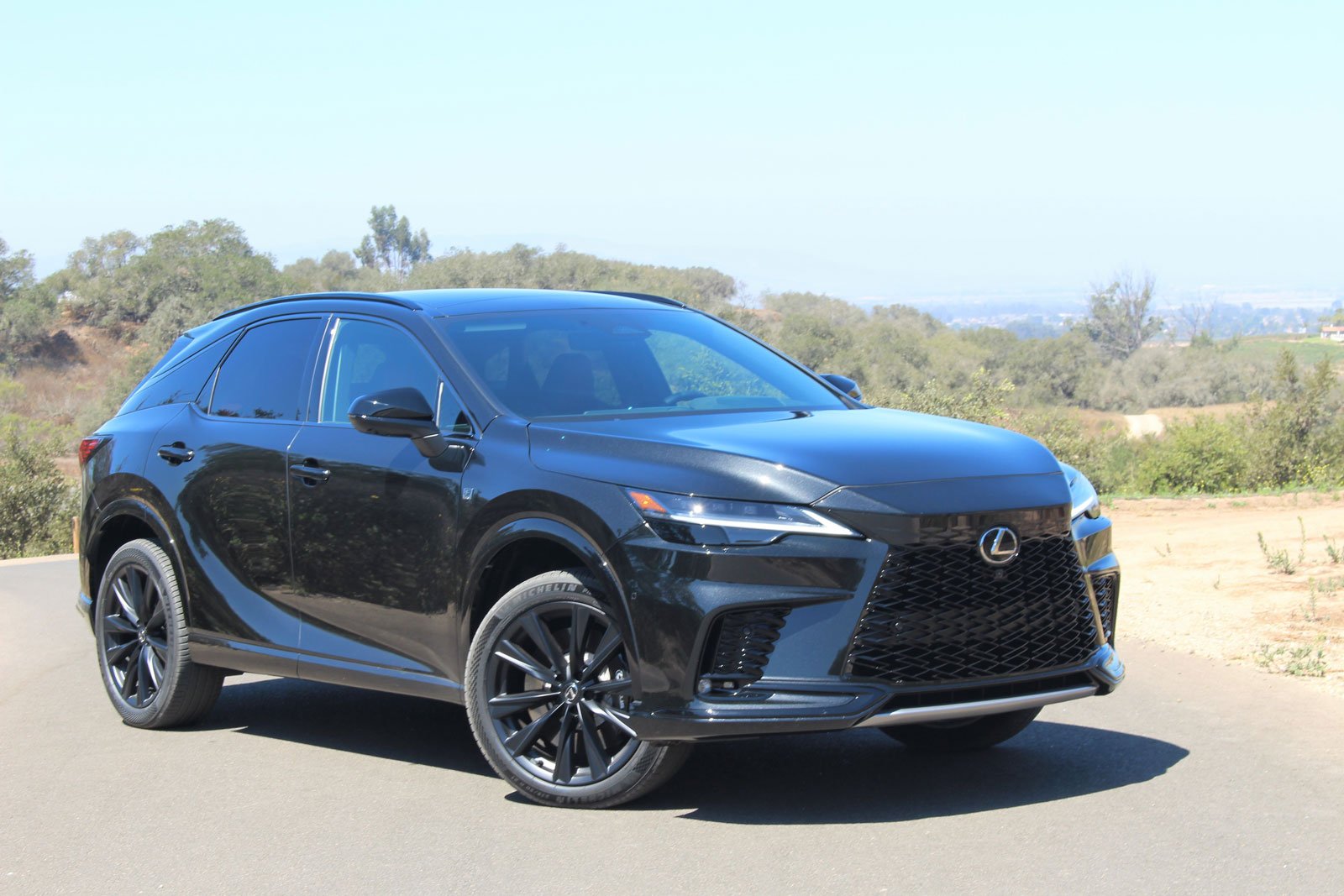 Power and efficiency hand in hand.

The RX has been the best-selling Lexus for what seems like forever, dominating its segment all the while, even though the crossover has never really been considered an emotional purchase. That might change with the 2023 Lexus RX 500h F SPORT Performance. 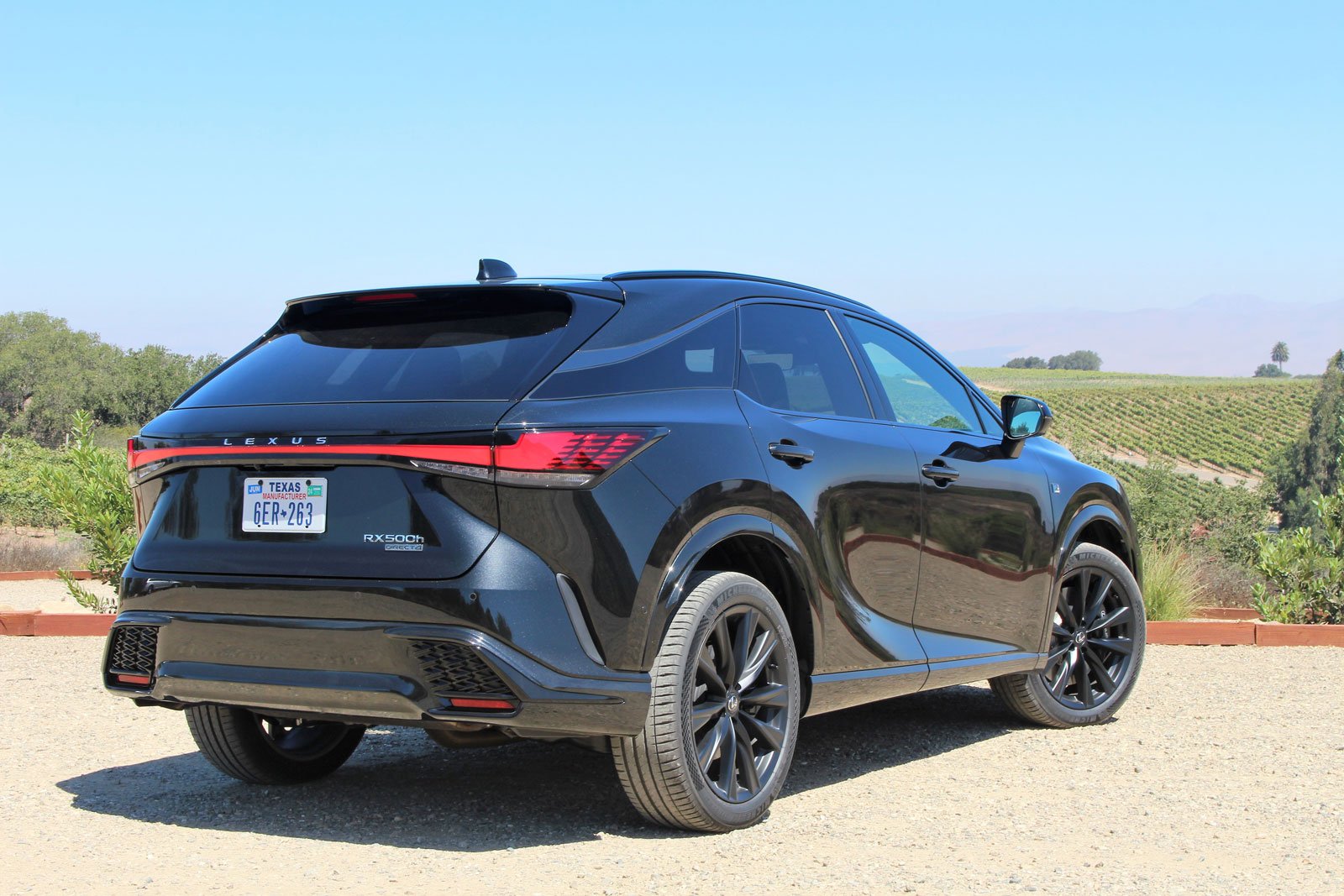 Fully redesigned from bumper to bumper, the new fifth-generation RX boasts a fresh design and obviously more on-board tech, but its list of powertrain choices has doubled, from two to four. Among them is the new RX 500h, which promises the high performance, the looks and the luxury to compete with some of the German brand’s spicier crossovers.

Forward motion is provided by an ensemble of motors. First, there’s a turbocharged 2.4L inline-four that by itself provides 275 horsepower, which can also be found in the milder 2023 Lexus RX 350, matched to a six-speed automatic transmission. It’s accompanied up front by a motor/generator, while the rear axle benefits from a high-output electric motor. Like the RX 350h and unlike the also-new Lexus RX 450h+, the RX 500h’s hybrid powertrain can’t be plugged in. The kit develops a combined 366 horsepower and what Lexus estimates to be 406 pound-feet of torque, even though mixing and matching those power sources doesn’t give an exact number. This setup allows for an all-wheel drivetrain. 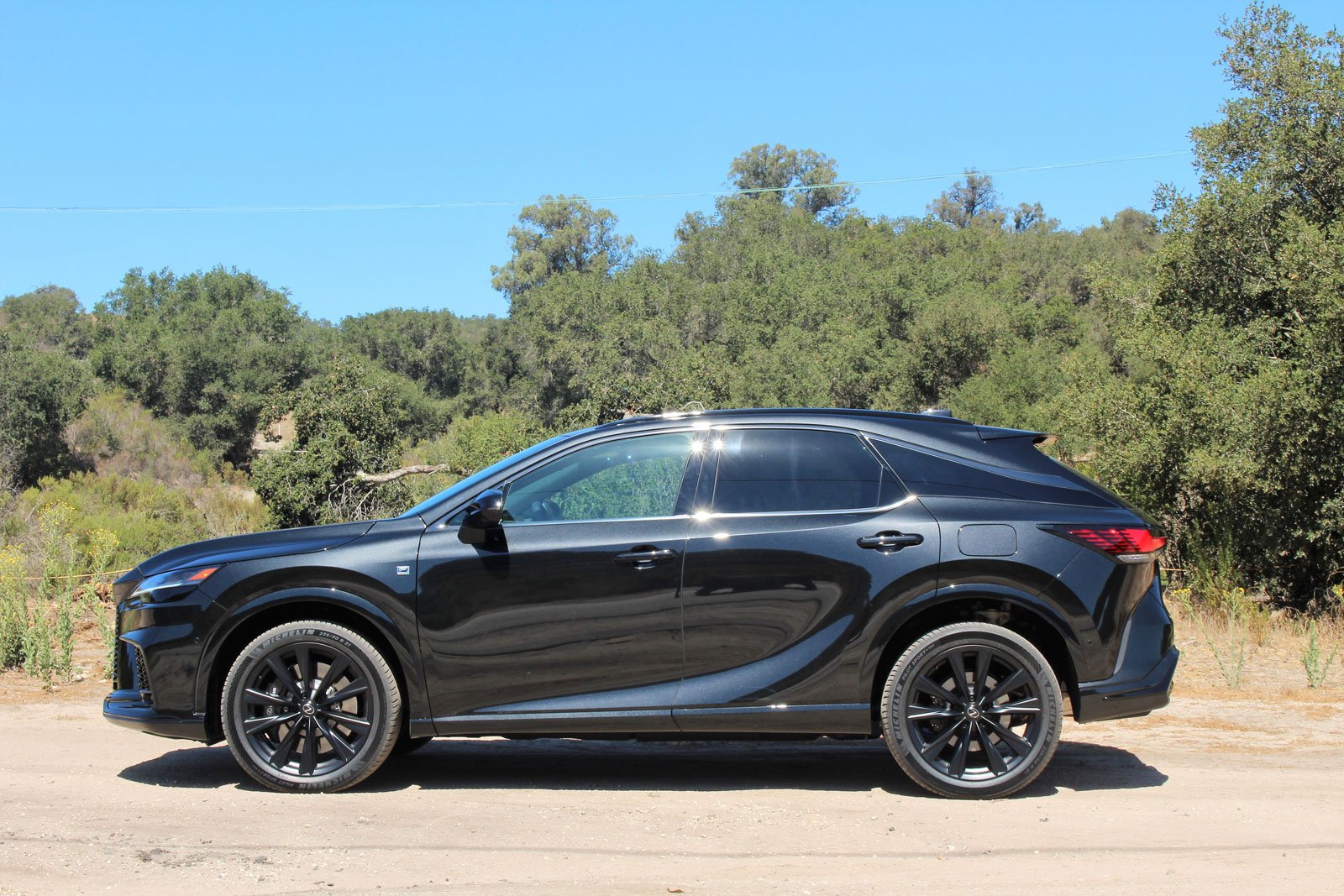 According to the brand, the rear motor gets its own power control unit and is energy-regeneration capable, unlike the setups in its other hybrid vehicles. The 2023 Lexus RX 500h F SPORT Performance is said to accelerate from 0 to 60 mph in 5.9 seconds.

The sport-tuned suspension also features adaptive variable dampers that sift through hundreds of settings in milliseconds as it seeks to provide a good balance of ride and handling. A four-wheel steering system is also included on the RX 500h, which can rotate the rear wheels up to four degrees in the same direction as the front ones at higher speeds for quick lane changes or transitions, or in the opposite direction at slow speeds to reduce the crossover’s turning radius. The RX 500h also rides on 21-inch wheels wrapped in Michelin Pilot Sport 4 SUV 235/50R21 rubber. There’s a Trail mode as well, which allows more wheelspin upon activation to get out of mildly sticky situations, and it shuts itself off at about 25 mph (or 40 km/h). 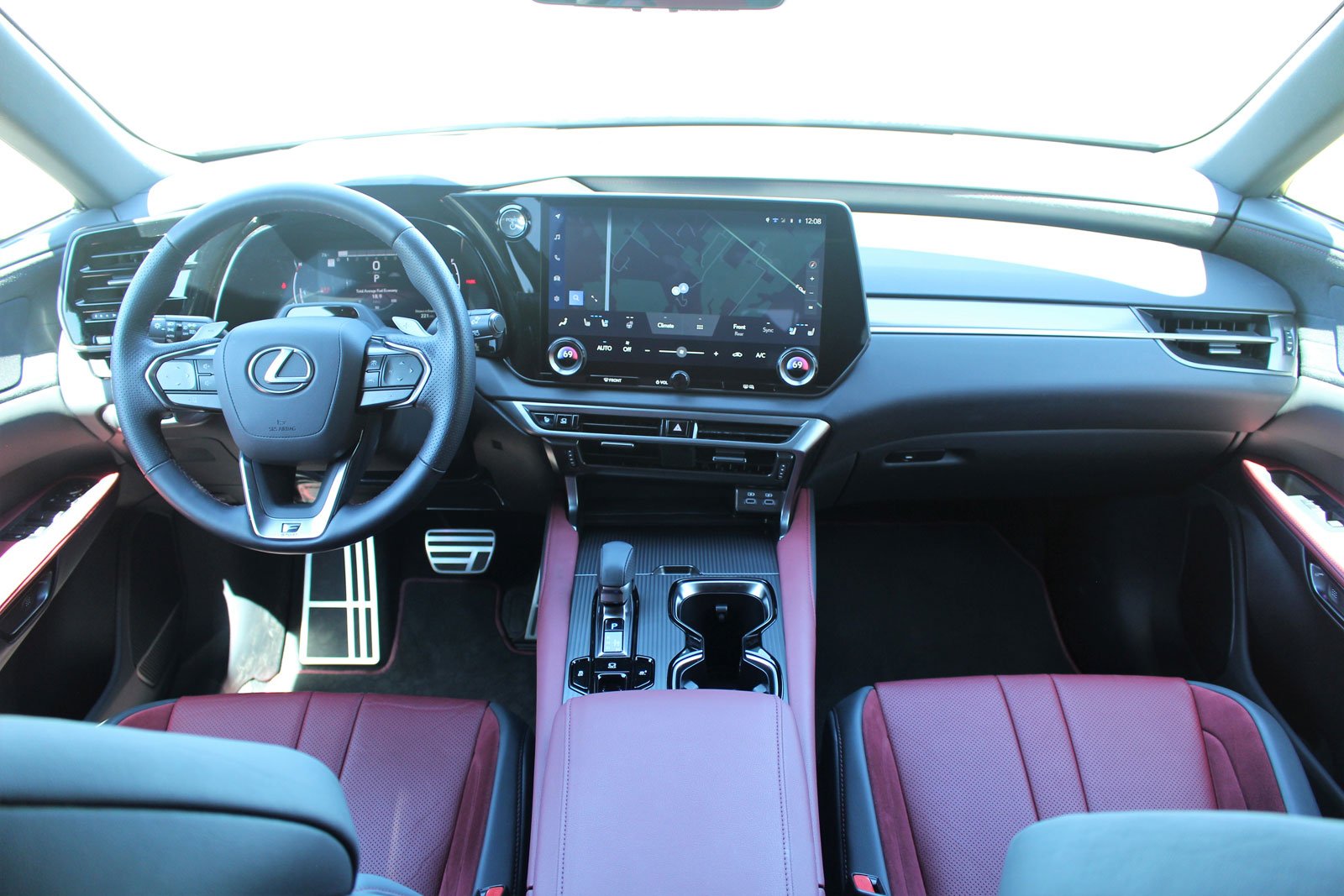 Hitting the road in the outskirts of Santa Barbara, California, the first thing we noticed about the 2023 Lexus RX 500h F SPORT Performance is that it felt and sounded rather tame. A little to tame for its own good. Activating the Sport mode livens up the powertrain’s reflexes, the rear-wheel steering and suspension calibrations are remapped, racy engine sounds can be heard in the cabin, and the crossover generally feels more akin to being pushed around in winding roads.

On the other hand, we can’t expect a rock-hard suspension. The vehicle floats slightly after hitting bumps and potholes, which makes for a more comfortable ride without sacrificing sportiness. Let’s not get too excited here, but this is the first RX that can actually give us goose bumps behind the wheels. At first glance, it’s a very decent rival to sportier midsize luxury crossovers such as the Acura MDX Type S, the Volvo XC90 Recharge and the Genesis GV80, but doesn’t quite have to gusto to shame the Mercedes-AMG GLE 53 4MATIC+, the Audi SQ7 or the BMW X5 X50i. This wasn’t Lexus’ intention, either. 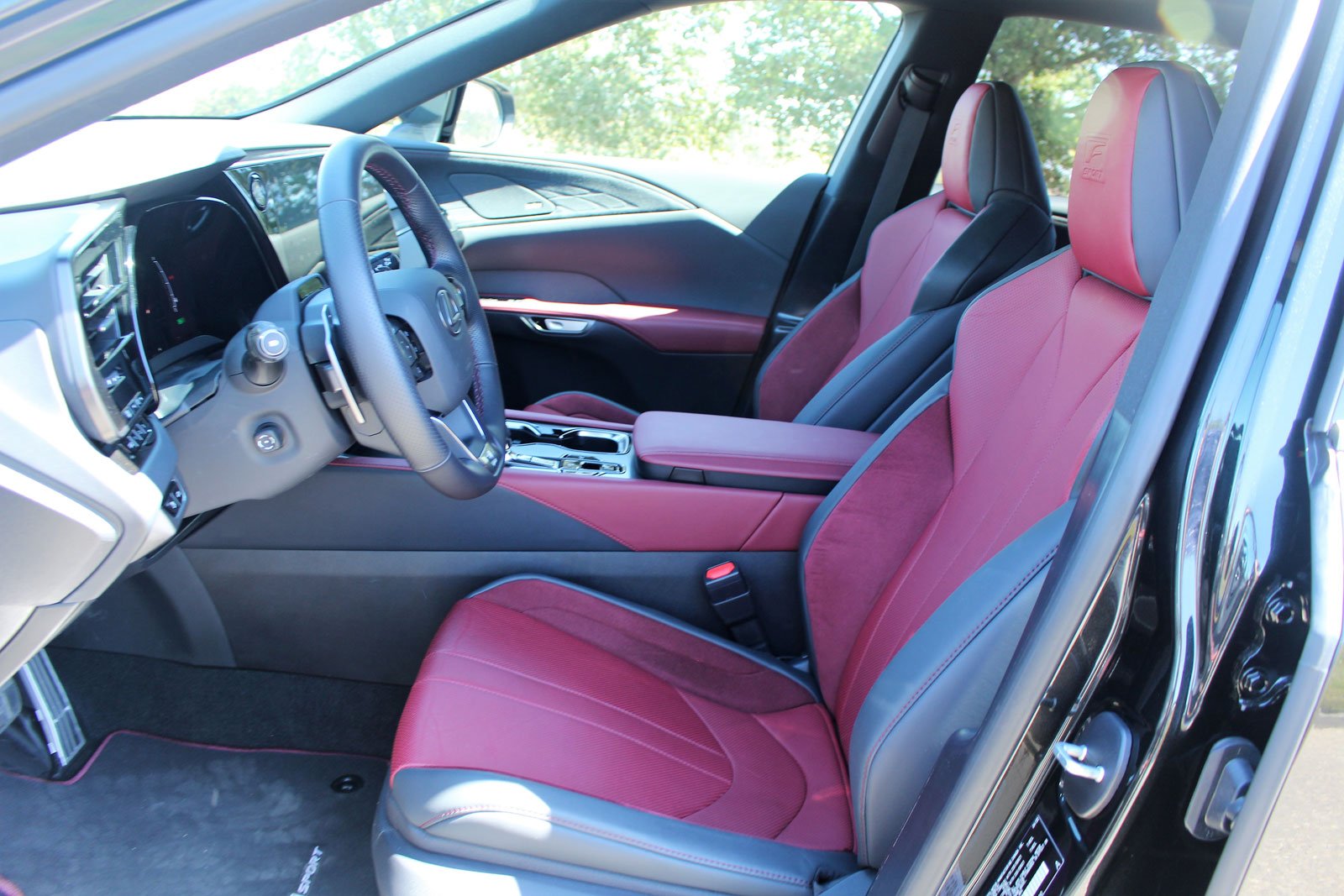 On the fuel economy front, the brand estimates the 2023 Lexus RX 500h’s city/highway/combined ratings at 27/28/27 mpg, or 8.7/8.4/8.7 L/100 km. It’s noticeably more efficient than the base RX 350, less than the RX 350h. Ratings for the RX 450+ plug-in hybrid aren’t available yet, and won’t be for a while as this variant will make a late entry to the North American market. The RX 500h is also more fuel-efficient than all of its aforementioned rivals, though the Volvo PHEV comes pretty close.

As the range-topping variant, the RX 500h gets most of the bells and whistles as standard, such as a panoramic sunroof, black and dark chrome exterior trim, ventilated front seats, F SPORT perforated leather and Ultrasuede seats, Dark Graphite Aluminum interior trim, F SPORT instrumentation and three-zone climate control, among other things. 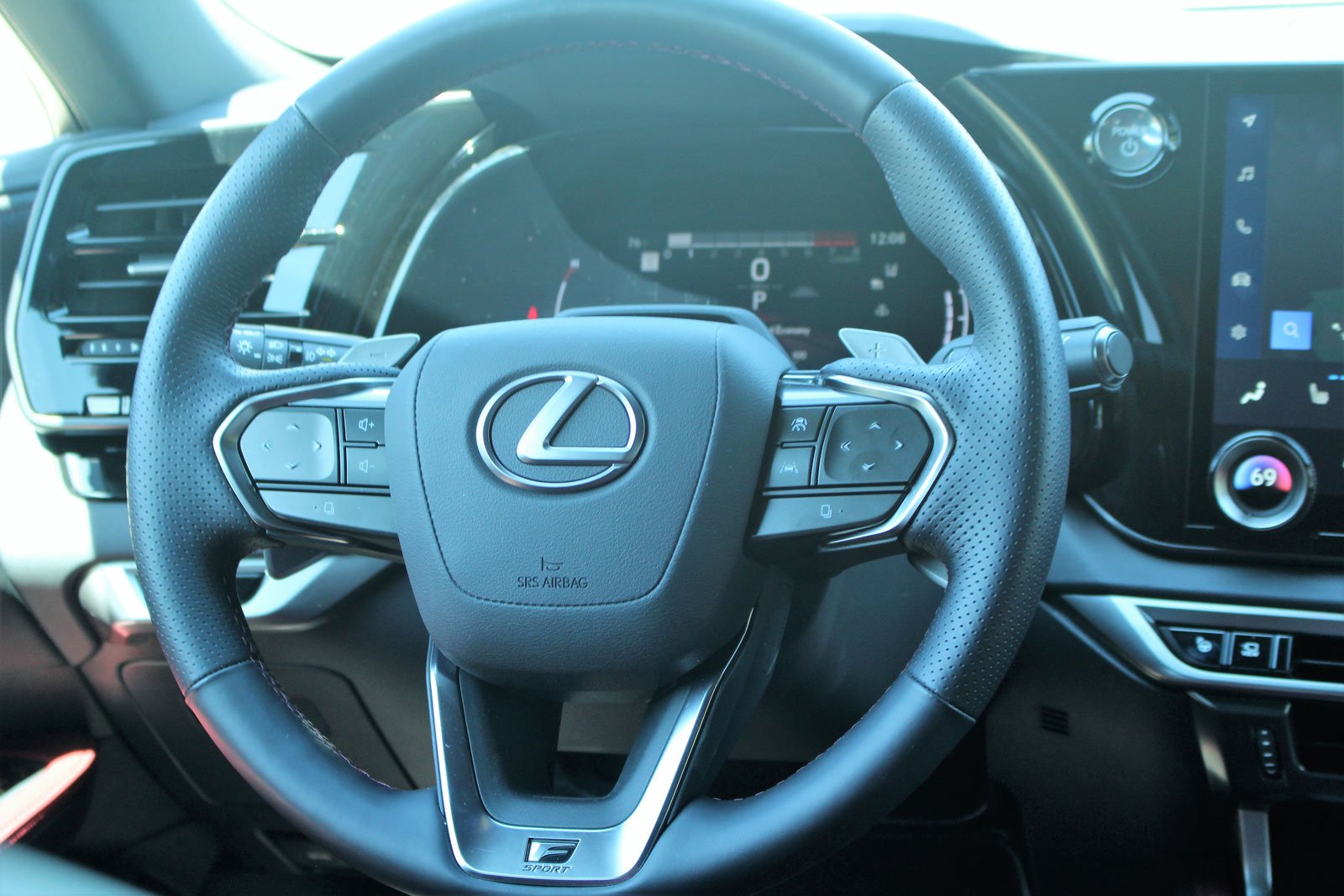 The all-new infotainment system that’s making its way into the Lexus’ new products is a blessing. The old system’s console-mounted touchpad was unintuitive to use and distracting, and the RX 500h gets the bigger of two available touchscreens (9.8 and 14.0 inches). The user experience is thus improved, but some things got worse, such as the drive mode selection that’s buried in the infotainment system menus, and the new thumb pads with unidentified arrows on the steering wheel, which only reveal their functionality by looking at the head-up display. 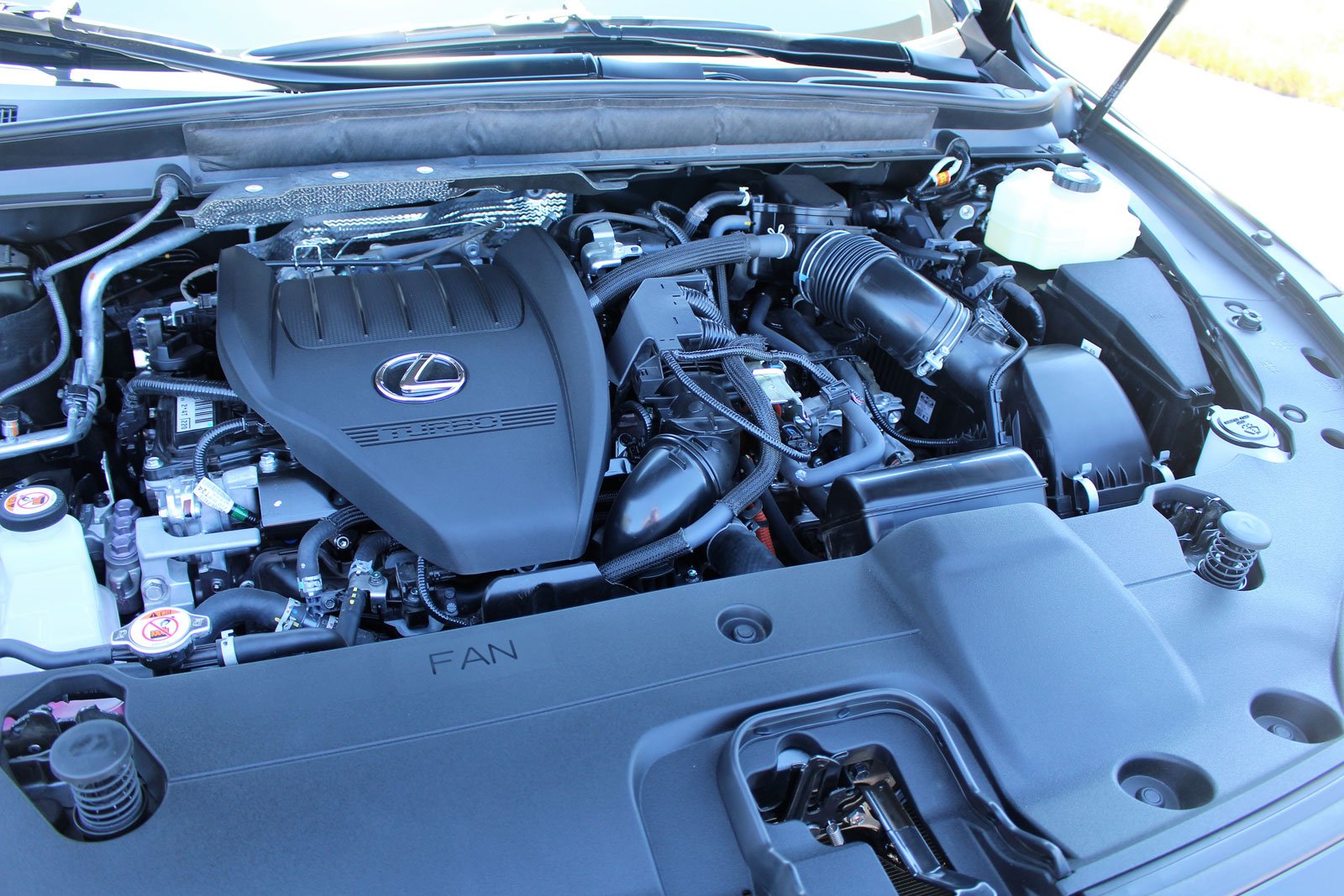 The new RX 500h serves up performance, handing and style, wrapped around a luxurious cabin that boasts the brand’s typically flawless fit and finish. It offers sportiness without sacrificing comfort, which we like. There are some ergonomic issues to deal with, but overall, it’s a fine luxury crossover that has something rarely seen in Lexus utility vehicles, and that’s emotion.

The Suzuki Jimny EV won't come to North America. The little SUV is still part of the kei car category in Japan. The...
Read more
Previous articleMercedes-Benz and Rivian Sign Memorandum of Understanding to Produce Electric Vans
Next articleGreenpeace Places Toyota Last Among Automakers in the EV Race