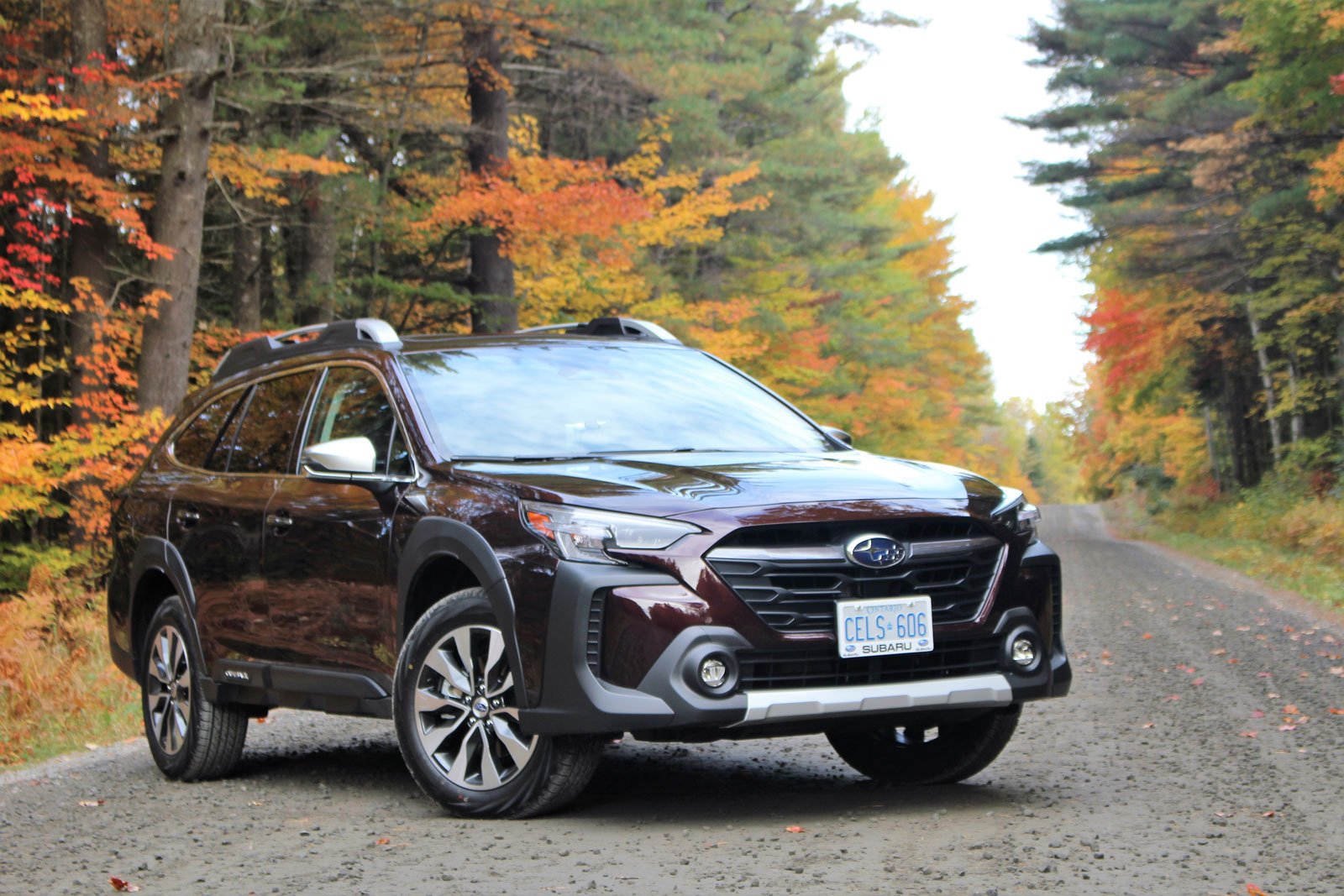 More than 100 improvements for this mid-cycle refresh.

The 2023 Subaru Outback is unique in the North American market. Launched way back in 1995 as a more rugged, active lifestyle variant of the Legacy Wagon, the Outback has become a standalone model over time, and offers a combination of car-like handling and crossover-like versatility at a reasonable price. During that time, very few direct competitors came and gone.

The 2023 model year brings some cosmetic changes, but also a bunch of improvements under the skin, along with a new Onyx Edition for the Canadian market, which was already available in the United States. 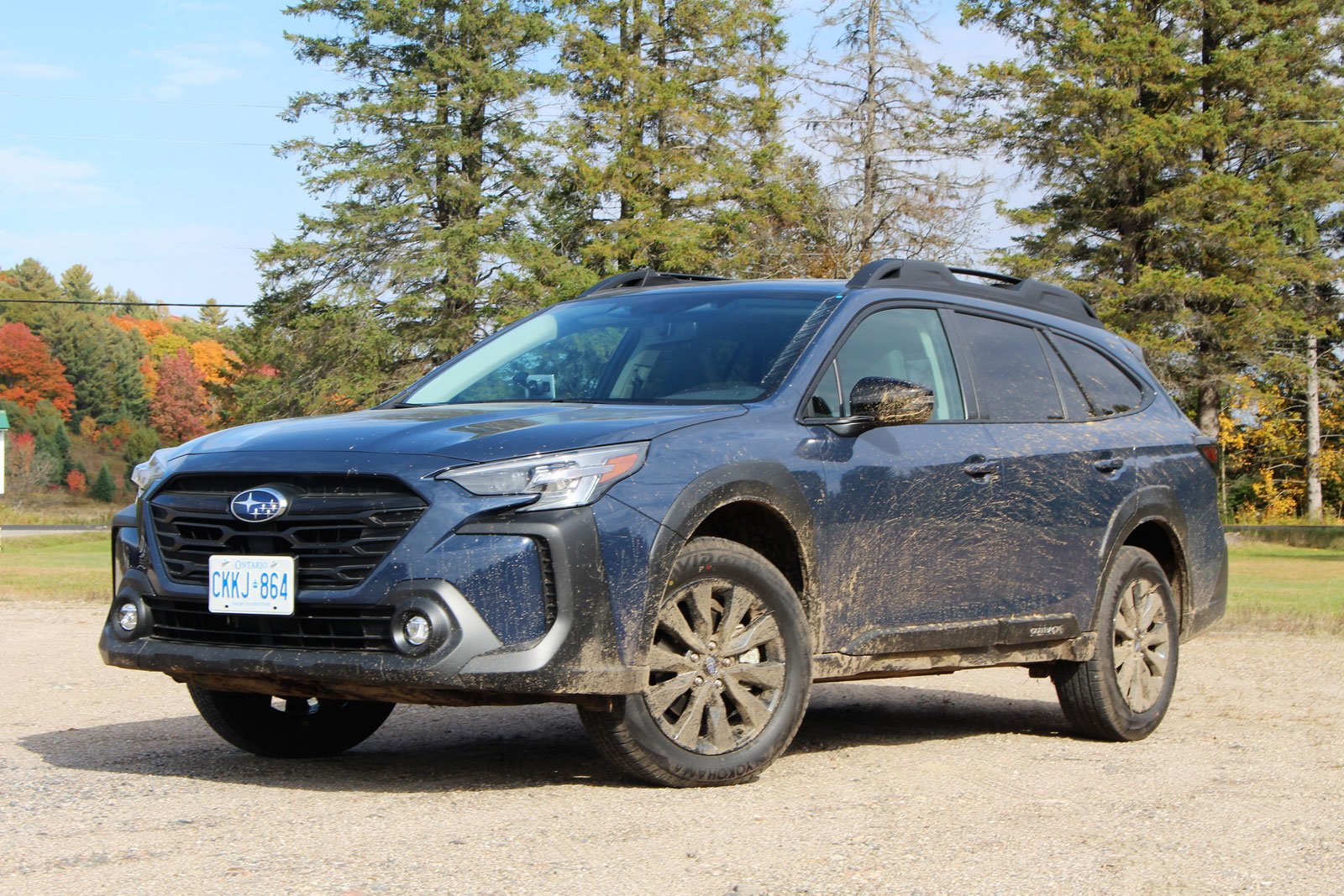 In the U.S., the midsize 2023 Subaru Outback competes with two-row crossovers such as the Chevrolet Blazer, the Ford Edge, the Nissan Murano, the Honda Passport and the Hyundai Santa Fe. Only the Honda and the Hyundai offer some sort of outdoorsy, cottage-trail variants with a more rugged appearance. However, in Canada, the company figured out that buyers cross-shopped compact crossovers instead, such as the Honda CR-V, the Toyota RAV4, the Mazda CX-50, the Hyundai Tucson, the Nissan Rogue and the Volkswagen Tiguan. A strange behaviour as the Subaru Forester is also a compact crossover and should be their direct rival.

All trim levels except the Outback Wilderness, a jacked-up variant with more off-roading potential that was introduced last year, receive new front and rear bumper trim, a larger grille as well as reshaped LED headlights and fog lights. The wheel arch cladding has also been revised, and there are two new paint colours to choose from: Dark Mahogany Pearl which replaces Cinnamon Brown Pearl, and Cosmic Blue Pearl which replaces Abyss Blue Pearl. By the way, Subaru doesn’t charge extra fees for some paint hues, unlike many other automakers, which simplifies the ordering process. 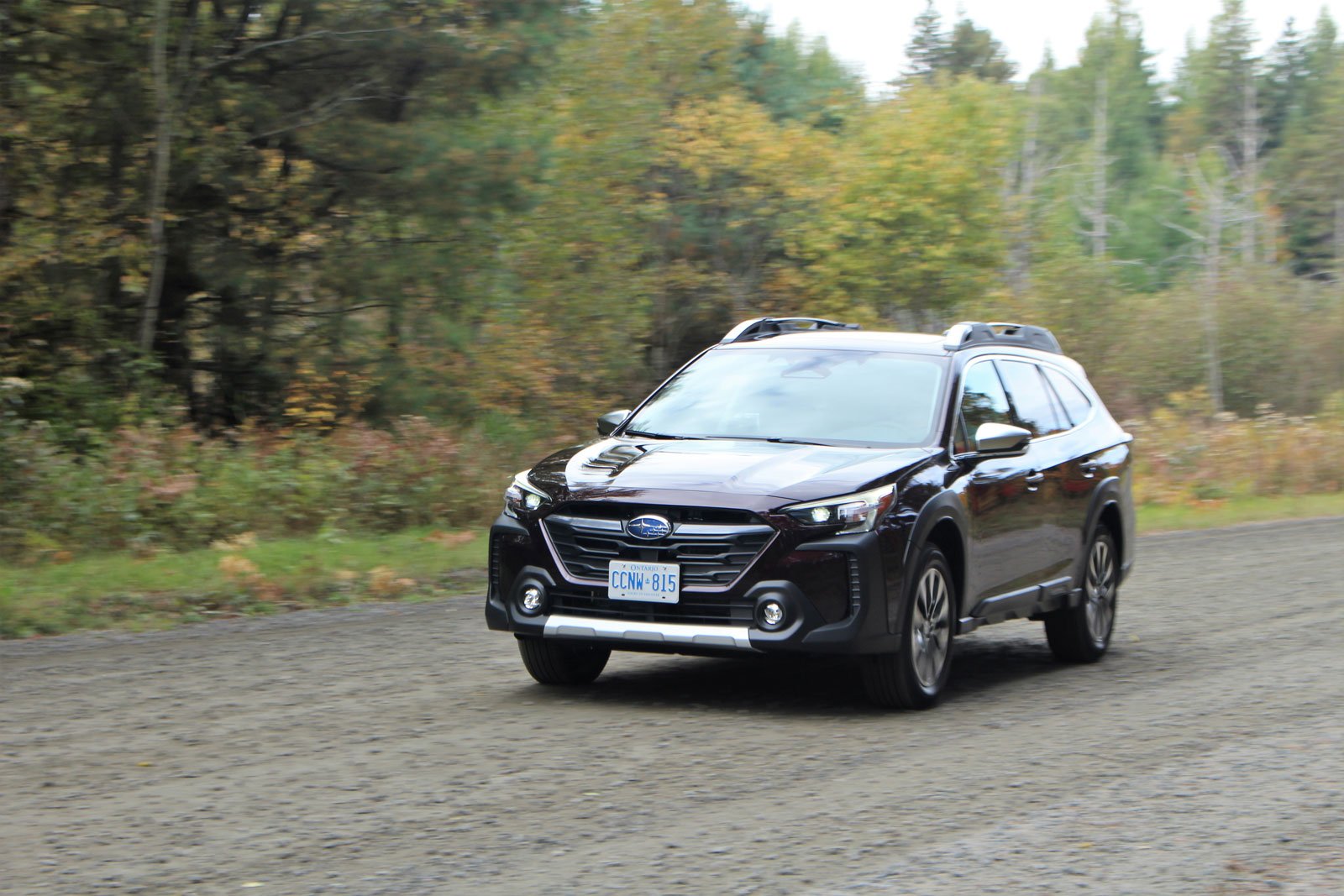 As before, the more affordable trim levels get a naturally aspirated 2.5L flat-four engine that develops 182 horsepower and 176 pound-feet of torque, managed by a continuously variable automatic transmission with simulated gear shifts and wheel-mounted paddles. Of course, the brand’s full-time all-wheel drivetrain, which varies the front/rear power split from 60/40 to 50/50 according to driving conditions, is standard across the board.

Uplevel 2023 Subaru Outback trims get a turbocharged 2.4L flat-four that develops 260 horsepower as well as 277 pound-feet of torque from 2,000 to 4,800 rpm, it too matched to a CVT. Both can run on regular unleaded fuel, so the turbo mill won’t cost extra to fill up at the gas station. 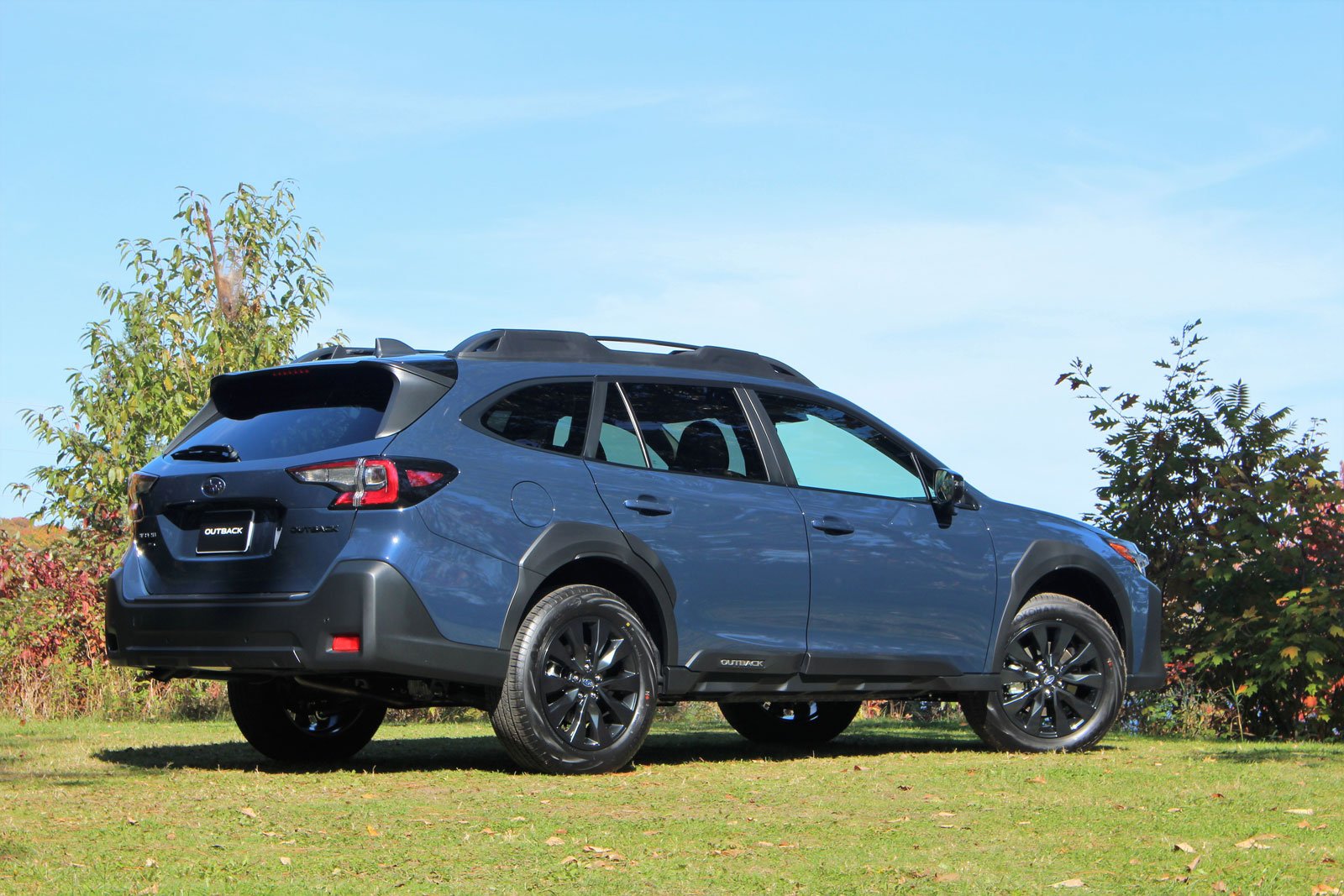 Following the U.S. market’s lead, the Subaru Outback Onyx Edition arrives in Canada, positioned between the volume Touring and Limited trim levels, equipped with the base 2.5L engine, and the automaker believes it will be the nameplate’s most popular variant. The Onyx Edition is the Subaru Ascent’s best-selling trim level in Canada, so it makes sense. For 2023 in the U.S., the Outback Onyx Edition can now be specified with the 2.5L engine, in addition to the turbo 2.4L that was standard fare last year. The Onyx Edition includes a gloss black grille, black roof spoiler and window surrounds, a rear bumper step pad, heated rear seats, StarTEX durable and washable seat upholstery with green contrast stitching, dual-function X-Mode drive system (with Snow/Dirt and Deep Snow/Mud settings) and more. 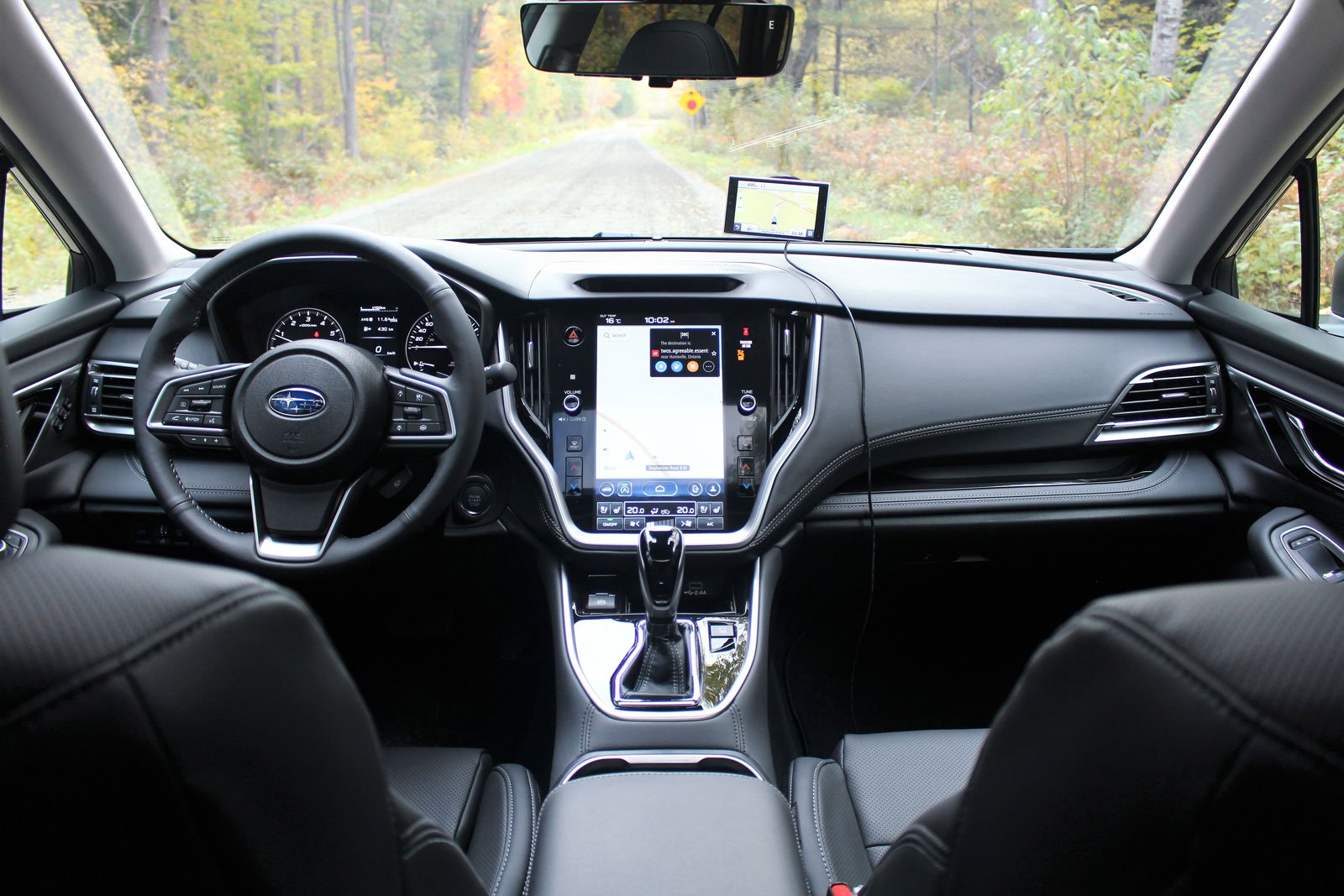 With no significant mechanical changes, the 2023 Subaru Outback’s road manners are pretty much the same on the 2022 model. That means a comfortable ride with ample suspension travel, a solid chassis, a quiet cabin and decent performance with the base engine. The turbo mill is handy for quick take-offs and is a nice-to-have motor, but otherwise, it doesn’t make the Outback any more thrilling to drive. In short, those buying a lower trim level aren’t missing all that much.

During our drive in the beautiful Muskoka region north of Toronto, its landscape enhanced by fall colours, we appreciated the Outback’s smoothness and refinement, whether it was on the highway, country roads or low-speed village streets. We even got the opportunity to get the vehicles dirty on a short off-road stretch that included a mudhole, which the Outback easily traversed. A ground clearance of 8.7 inches or 220 millimetres does have its advantages, and the Wilderness variant even boasts a ride height of 9.5 inches or 241 mm in the U.S., 9.05 inches or 230 mm in Canada—the latter gets standard skid plates which are optional south of the border. 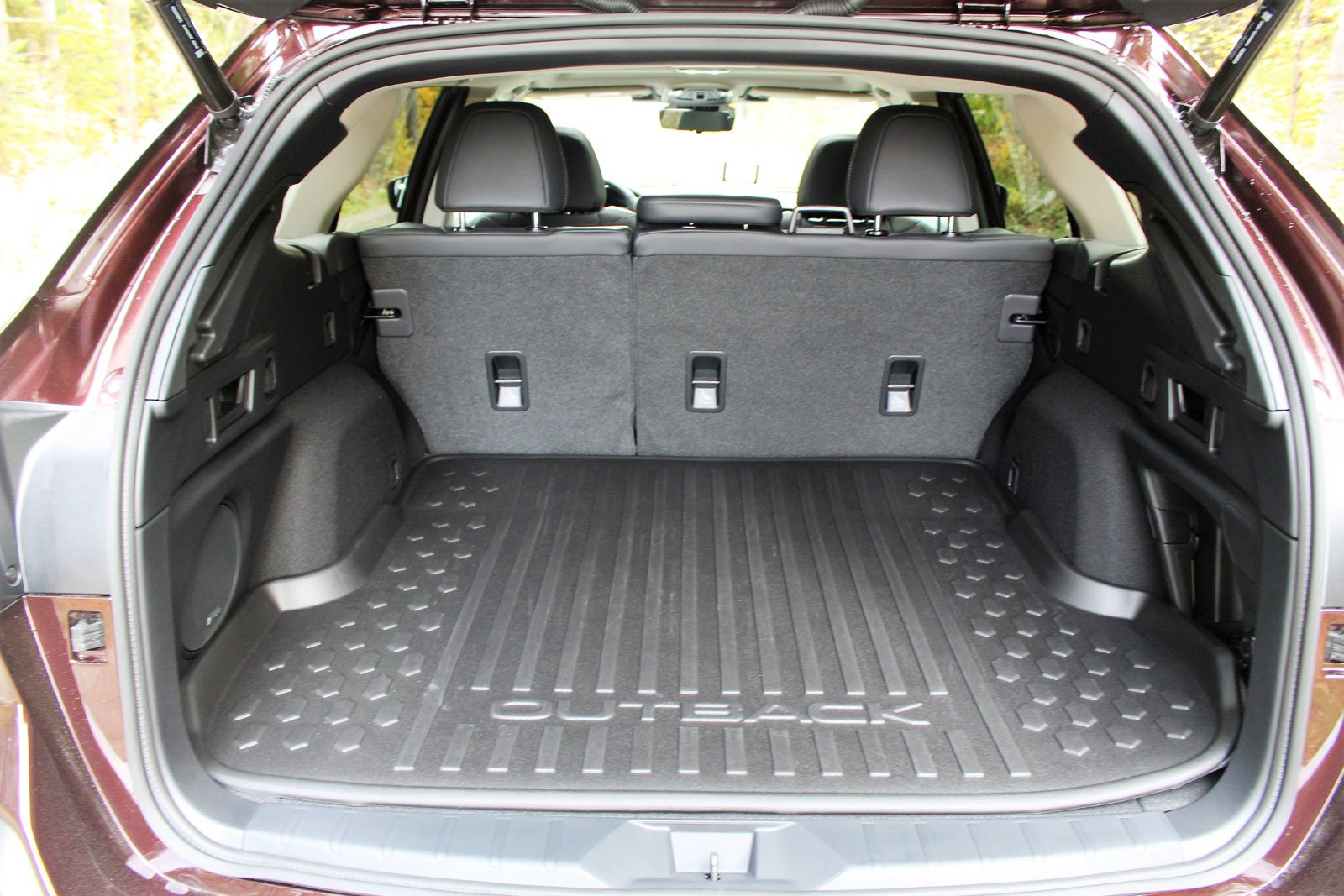 The 2023 Subaru Outback gets some technological improvements as well. The infotainment system with the vertical 11.6-inch touchscreen, standard in all but the base trim level, now integrates wireless Apple CarPlay and Android Auto as well as over-the-air update capability, while wireless charging is available and most trims now get front and rear USB-C ports. The screen has revised climate control buttons so heated and ventilated seats are easier to activate, and through the SUBARU STARLINK app connectivity, owners can remotely start the vehicle, activate the ventilated seats and lock/unlock doors.

Version 4 of the EyeSight safety driving aid safety is now found in the 2023 Subaru Outback. It includes new camera housings that prevent the lenses from getting dirty and heated elements eliminate fog in the housings. In addition to the two windshield-mounted cameras, the Premium XT trim level adds a third, wide-angle camera that increases the system’s view from 64 to 100 degrees. Lastly, the heated steering wheel is now heated all around the rim, not only on the sides. In total, Subaru claims that there are more than 100 improvements made to the vehicle’s interior. 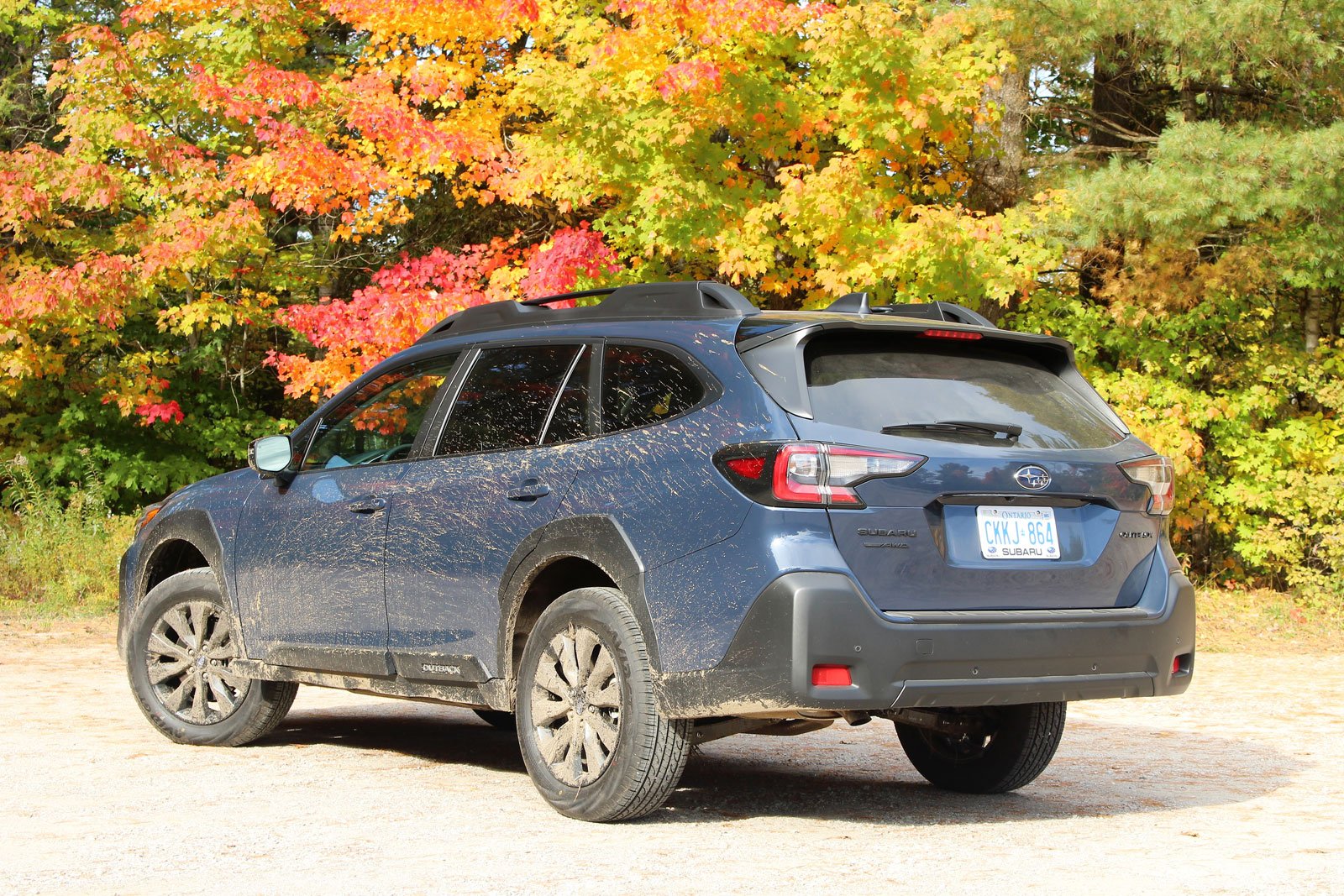 Pricing starts at $29,620 in the United States and $34,690 in Canada, including the freight and delivery charge. Here’s the complete breakdown: 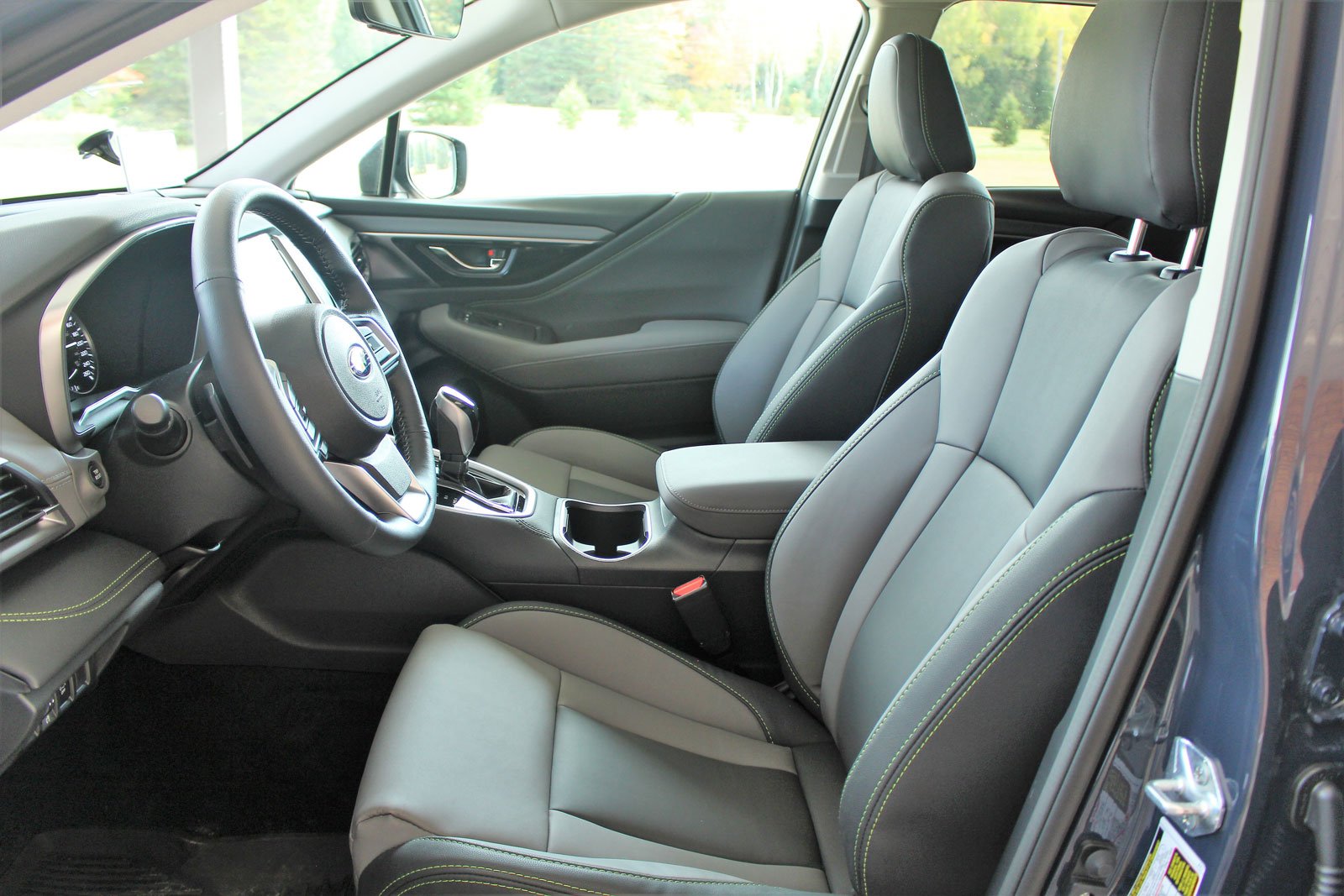 Improved in many ways, with a new reasonably priced Onyx Edition that should prove quite popular, the 2023 Subaru Outback’s mid-cycle refresh may not seem like a revelation, but it simply makes the versatile crossover wagon better than before. As before, it’s a genuine alternative to the current sea of compact and midsize crossover vehicles on the market, with good interior room and more than decent fuel economy.

What does it take these days to test and share your impressions of driving a Tesla vehicle? It's worth mentioning that the California-based manufacturer...
Read more