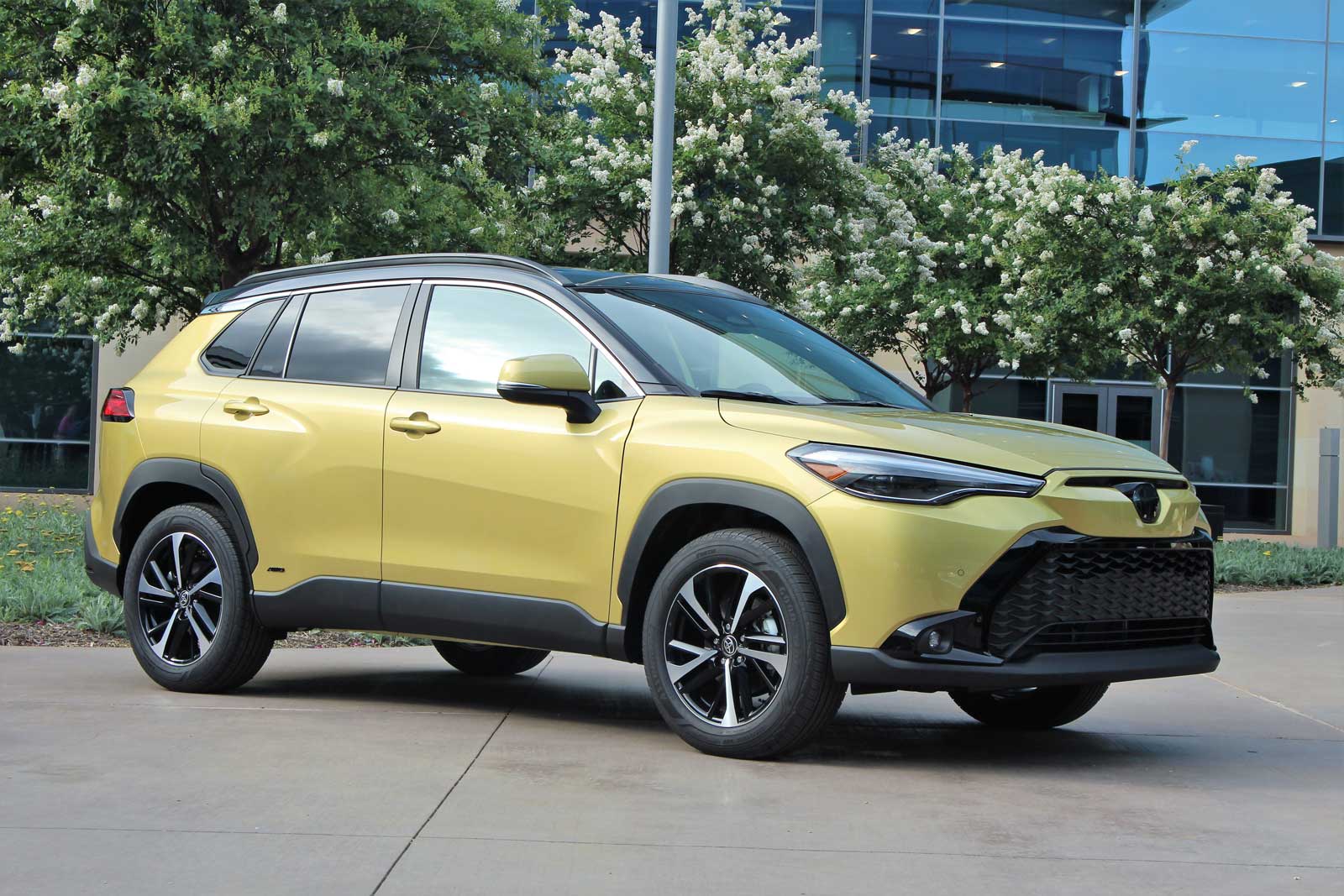 After introducing the crossover variant of its well-known nameplate, Toyota now is launching the 2023 Corolla Cross Hybrid, expanding its portfolio of electrified vehicles in Canada and the United States.

While the “regular” version of the Corolla Cross hit the market in late 2021, the arrival of the hybrid powertrain was announced and expected this year. Although we don’t have all the technical details yet, the Japanese automaker has revealed some interesting tidbits. 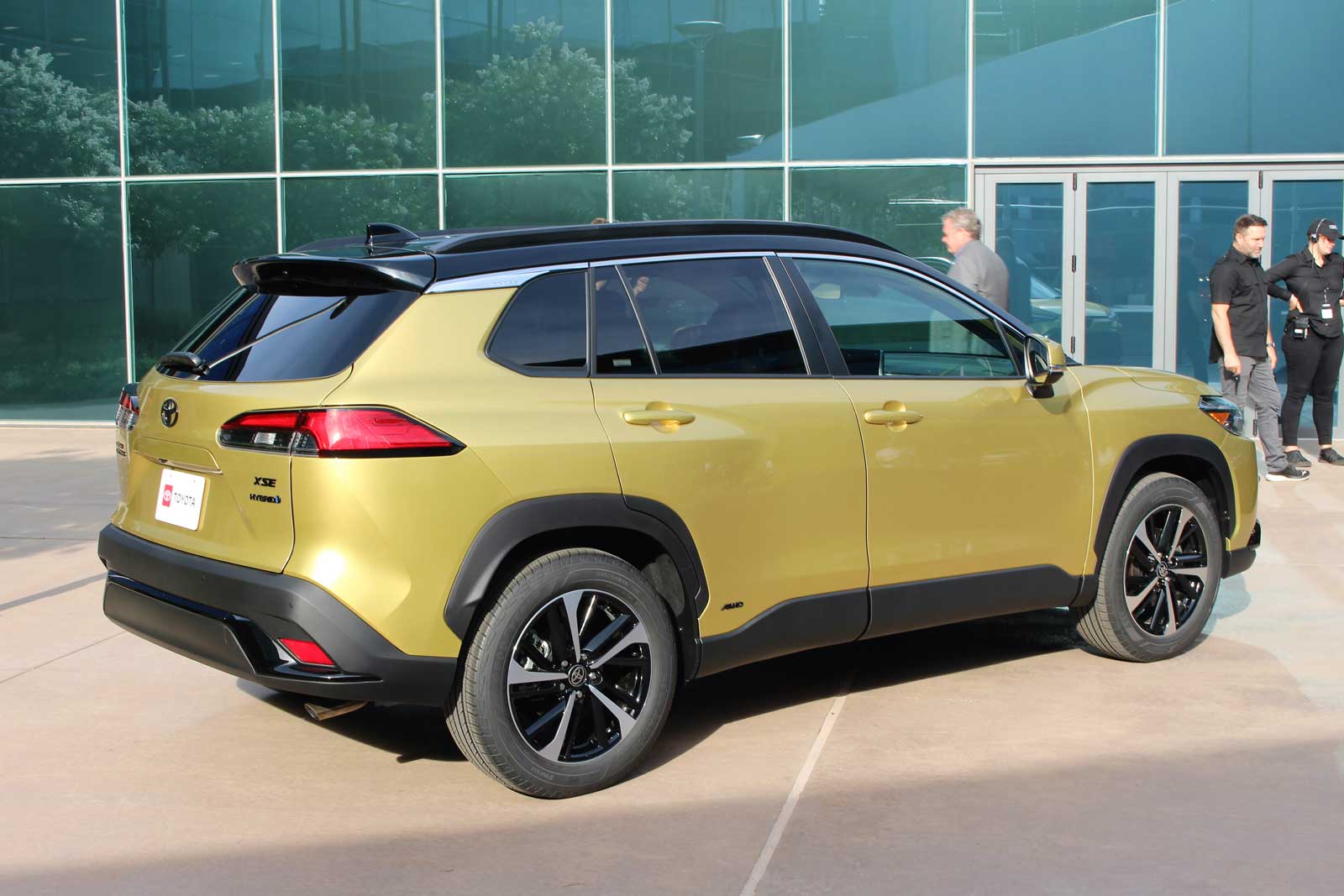 In the U.S., the 2023 Toyota Corolla Cross Hybrid will be offered in LE, XLE, S, SE and XSE trim levels, and will boast 194 horsepower, standard all-wheel drive, a 0-60 mph time of 8.0 seconds and an overall fuel economy rating estimated at 37 mpg. In Canada, only SE and XSE grades will be available, able to complete the 0-100 km/h dash in 8.2 seconds and serve up a fuel economy average estimated at 6.4 L/100 km.

In comparison, the non-hybrid Corolla Cross relies on a 2.0L four-cylinder engine that develops 169 horsepower, which provides a combined city/highway fuel economy rating of 7.8 L/100 km or 30 mpg when equipped with AWD. 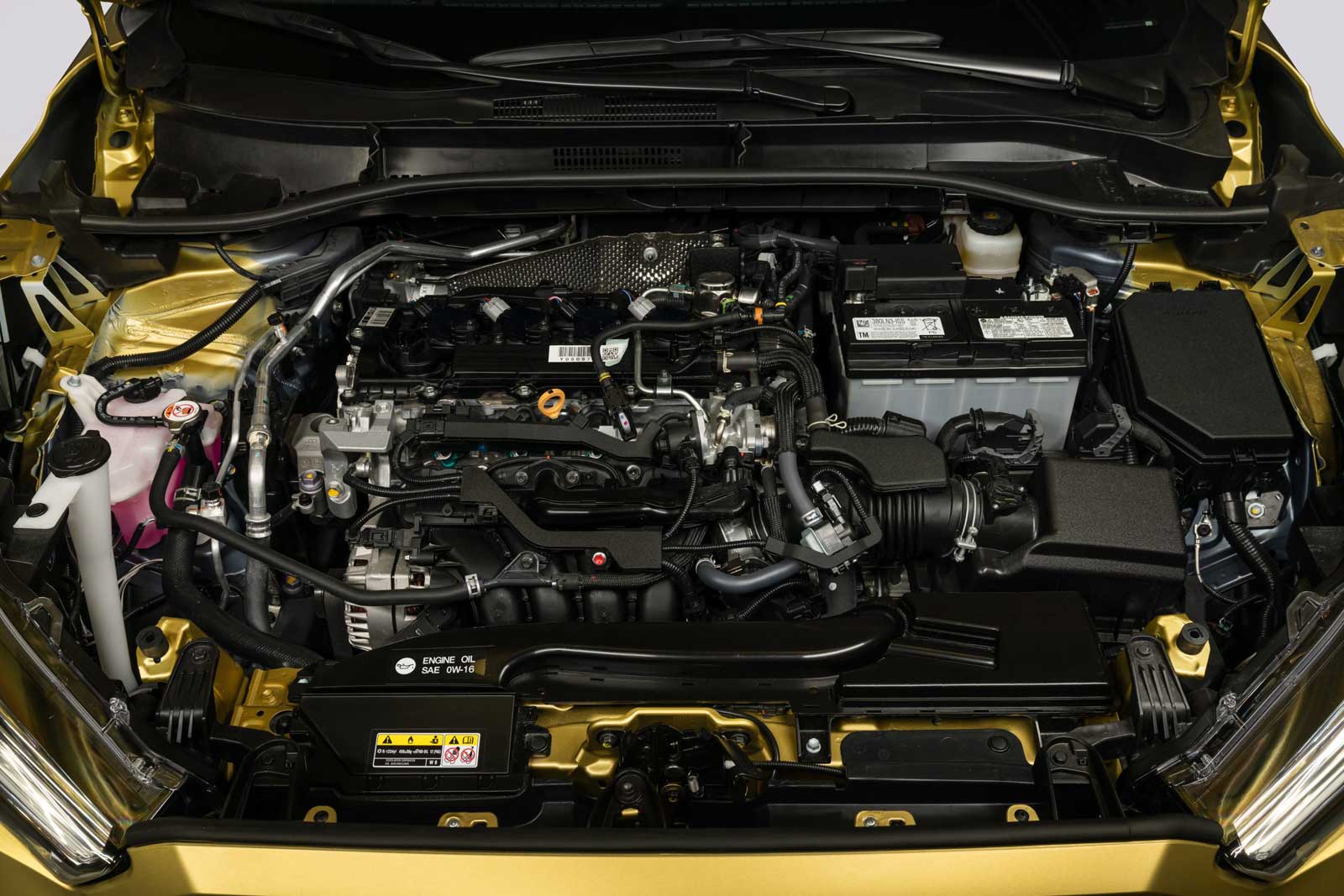 The Corolla Cross Hybrid can be easily distinguished from its conventional counterpart by its front fascia that replaces the prominent grille by a smaller nose and a black textured lower-body panel. The hybrid variant also wears a revised rear bumper that integrates a glossy black strip.

Standard features for the S and SE include 17-inch alloy wheels, sportier suspension tuning, LED headlights and taillights, a smart key and an eight-inch infotainment touchscreen, while the SE also boasts roof rails, wheel-mounted paddle shifters as well as blind spot monitoring and rear cross traffic alert. The XSE moves up to 18-inch wheels and a power driver’s seat. Heated front seats are standard in the SE in Canada and in the XSE in the U.S. 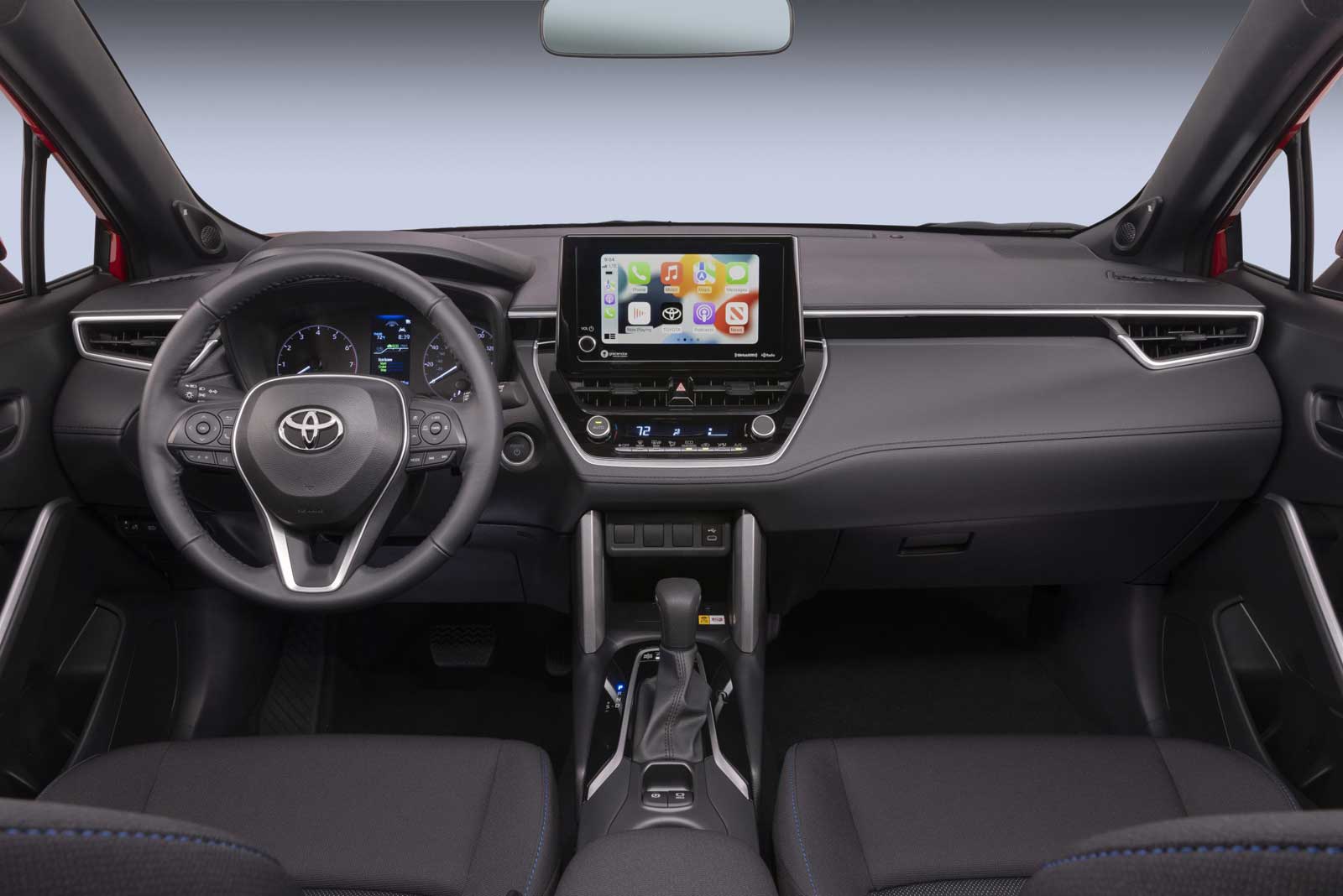 Six solid paint colors are available, and on SE and XSE trims, one of four two-tone combinations can be specified as well, which all include a black-painted roof. Inside, cloth seats are found in the LE, S and SE, while Softex simulated leather seating is found in the XLE and XSE, and three out of the five grades can be dressed up in one of two colour combinations.

All 2023 Corolla Cross variants—hybrid or not—receive a new infotainment system with wireless Apple CarPlay and Android Auto, capable of over-the-air updates, along with USB-C charge ports. The system includes what is called Intelligent Assist, allowing for voice commands by saying “Hey Toyota,” in addition to dual smartphone connectivity and an on-board Wi-Fi hotspot (data package required). 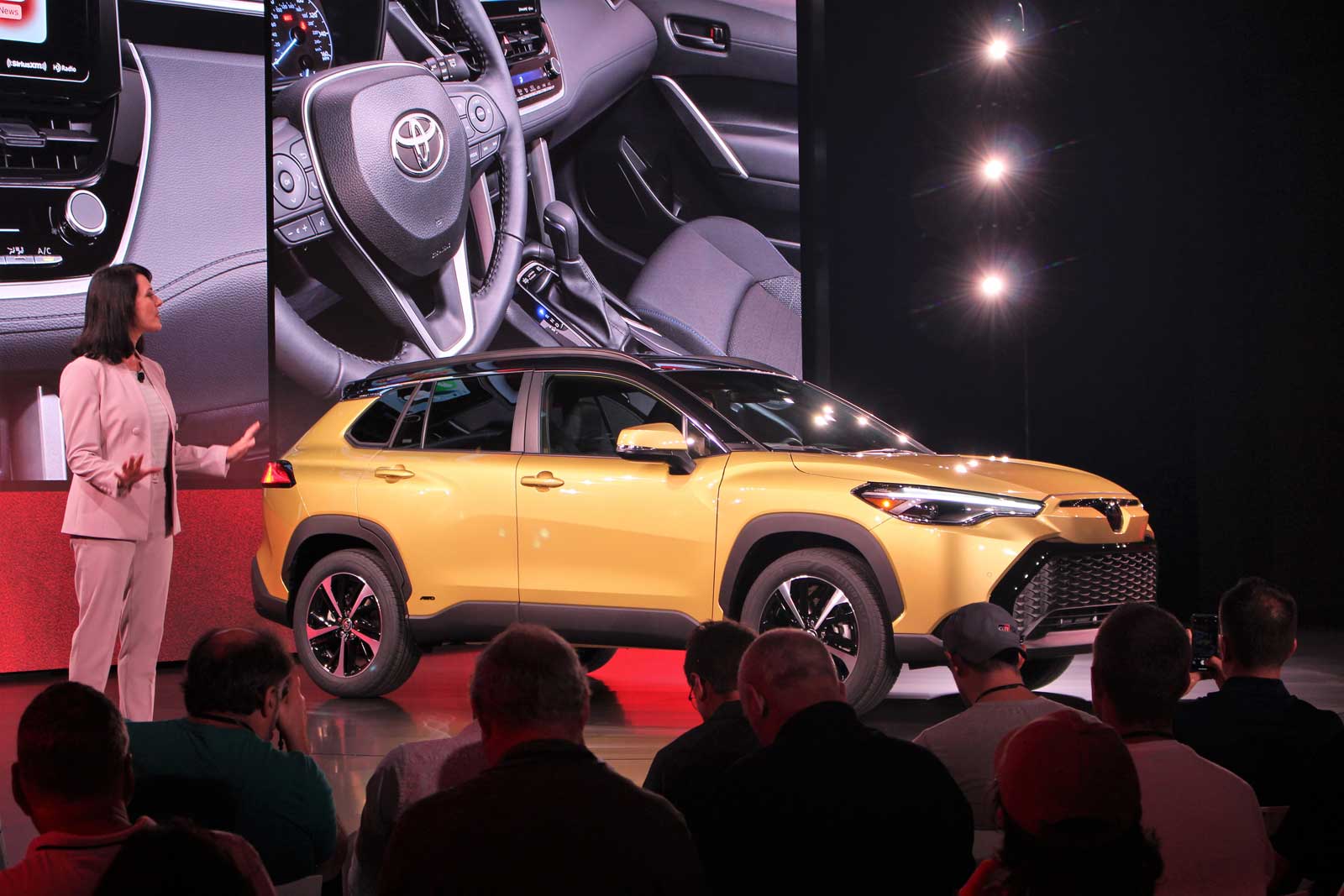 No pricing has been announced yet for the 2023 Toyota Corolla Cross, but it should go on sale sometime this summer across the United States and Canada. The electrified subcompact crossover will be built in Alabama and compete against the Chevrolet Trailblazer, Nissan Qashqai/Rogue Sport, Hyundai Kona, Kia Seltos, Honda HR-V, Subaru Crosstrek and many others.