Del Mar, California – The Toyota Prius gets a makeover for 2023.

For this fifth generation, the Toyota Prius Hybrid is probably undergoing its biggest transformation yet. The Prius still has a hybrid powertrain and a plug-in variant will be introduced in the first quarter of next year, but from that point on the changes between this new Prius and the previous generation are significant. And yet, we expected more…

So what’s the problem? The new one is only partially satisfactory. It has some notable improvements, some of which are nice surprises. However, where we were hoping for significant gains, disappointment awaited us.

That’s because Toyota has new plans for its Prius hybrid, and with this shift in mission comes some positive results, but also a few cons that are hard to ignore.

Toyota doesn’t want the new Prius to be a cab

We got the hint about this change of vocation during our welcome dinner in California. Satoki Oya, the engineer who designed the new Prius, mentioned that during the discussions leading up to the development of the 2023 Toyota Prius, the instructions were clear: no question of producing another cab, a vocation so many previous Prius models ended up occupying.

The strategy is simple. The Corolla Cross hybrid subcompact SUV is the perfect candidate for passenger transportation. The 2023 Prius aims to renew its customer base. 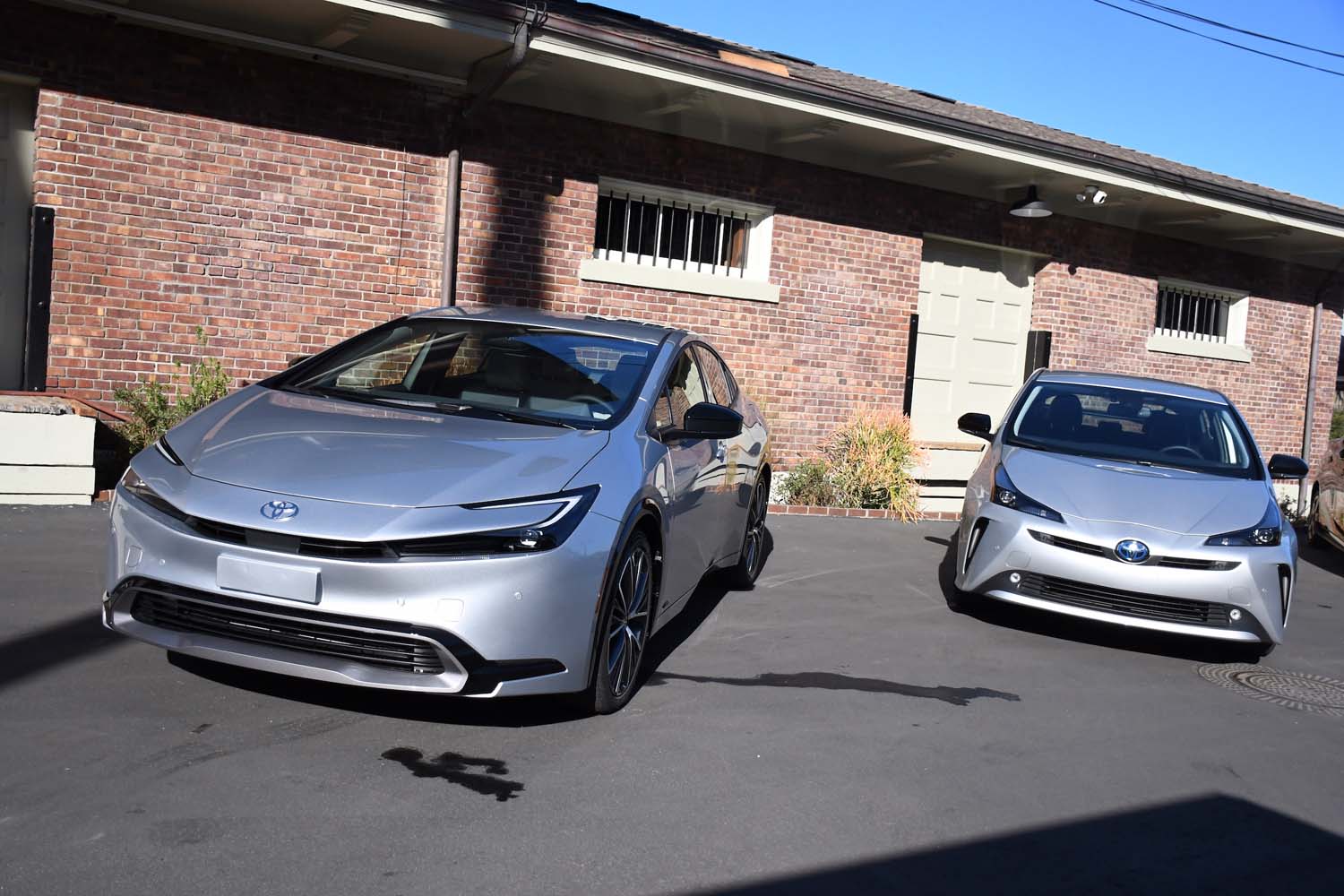 New styling for the 2023 Prius

This new generation is the first-ever Prius that looks good, period. Its design is sleek and assertive. The following is subjective, but it was the consensus opinion during this first drive; the front is good, the rear is spectacular. As for the side profile, it catches the eye. A few observers I met out in California couldn’t believe that this Prius was a… Prius. That kind of cold reaction never lies.

More pragmatically, the design is focused on aerodynamics to maximize fuel efficiency. The plunging hood, the sloping rear end, all contribute to this, as do the front flaps that serve to cool the car, but also improve its aerodynamic performance. The same goes for the underbody stabilizer panels, which aim to reduce drag. 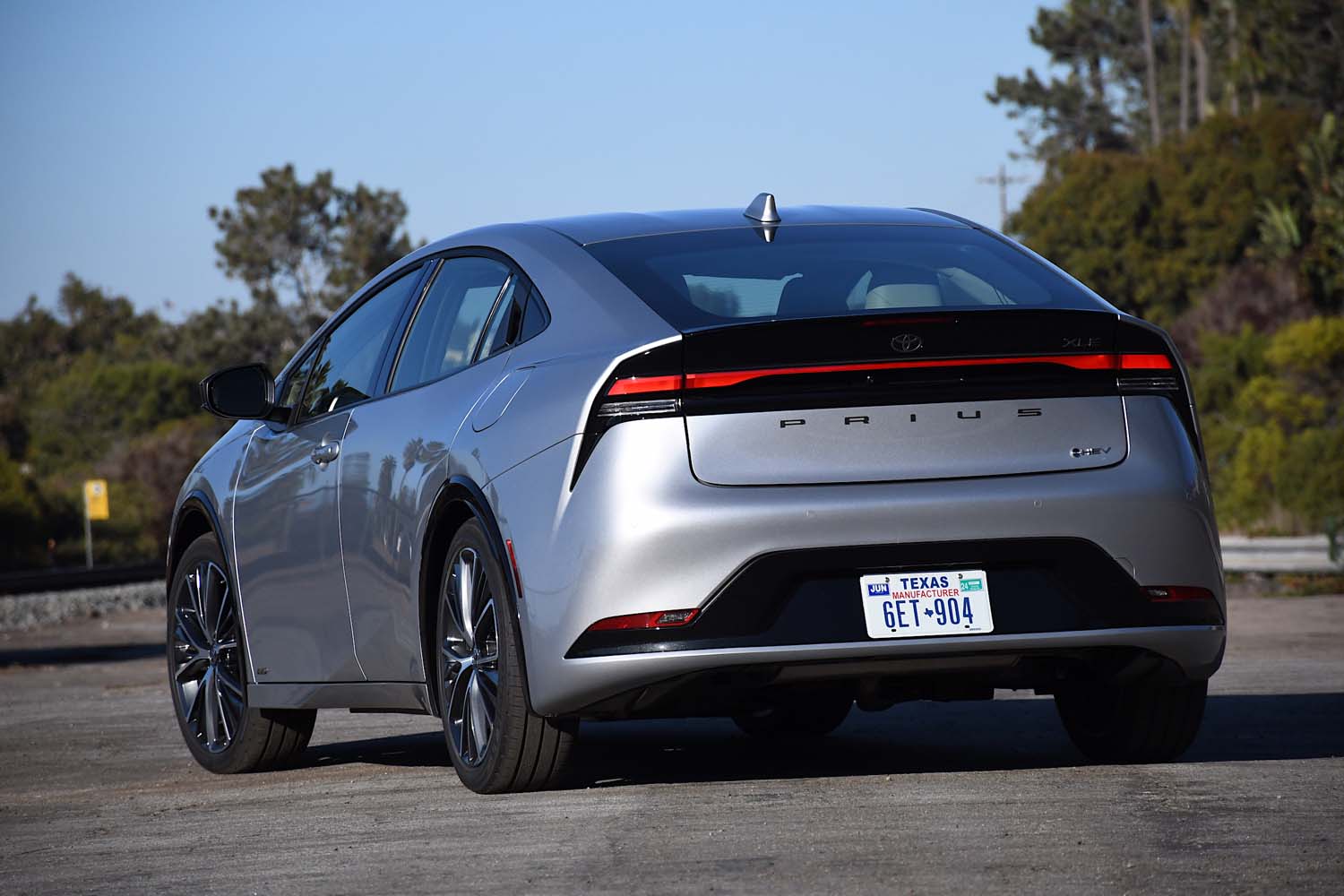 The roof has also been lowered by 50 mm, allowing the new Prius to cut through the wind more effectively. The steering wheel sits 25 mm lower, which changes the perception somewhat.

Since 2009, the Prius has been equipped with a 1.8-litre 4-cylinder engine paired with an electric motor. It now has a 2.0-litre 4-cylinder engine, still using the Atkinson cycle. The big difference is the power offered by the gas/electric combination. The last Prius offered 121 horsepower. The 2023 model now delivers 196, a 60% increase. Needless to say, this transforms the driving experience. When you step on the gas to make a pass, you don’t have to pray. The CVT’s whine is still present, however, but it’s a tad less annoying. 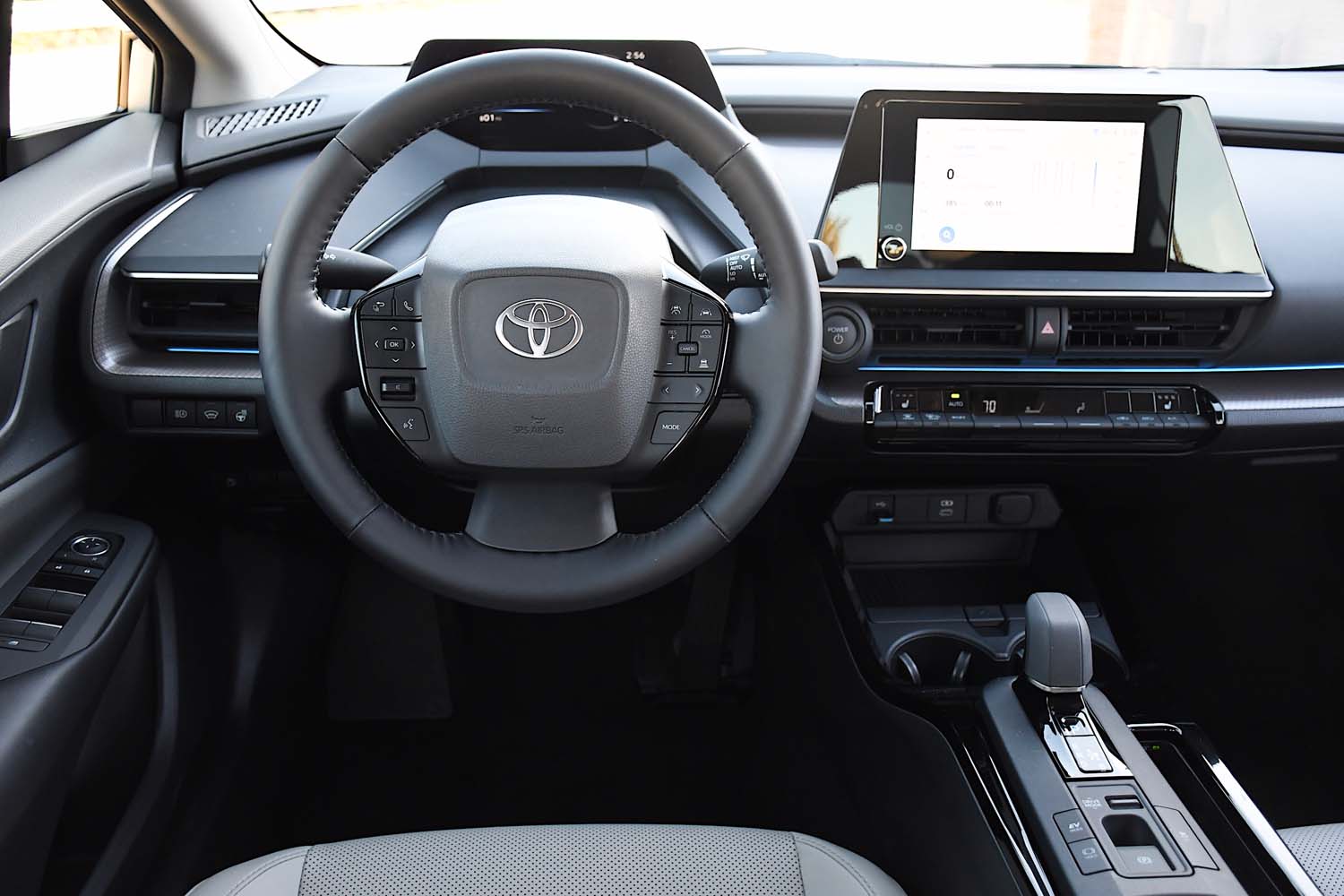 As for torque, Toyota doesn’t share any combined data, merely quantifying the capacity of each motor responsible for delivering it. We’re talking 139 lb-ft for the combustion engine, 152 for the electric motor, and 62 for the second electric motor, the one whose job it is to ensure all-wheel drive.

Yes, the 2023 Prius is back with all-wheel drive. In fact, both versions (XLE, Limited) offer it as standard. The front-wheel drive version will only be offered to Americans. And, good news, the Prius’ new all-wheel drive will still be available when you get up to highway speed. Remember that with the previous generation, it could only operate at speeds below 70 km/h. 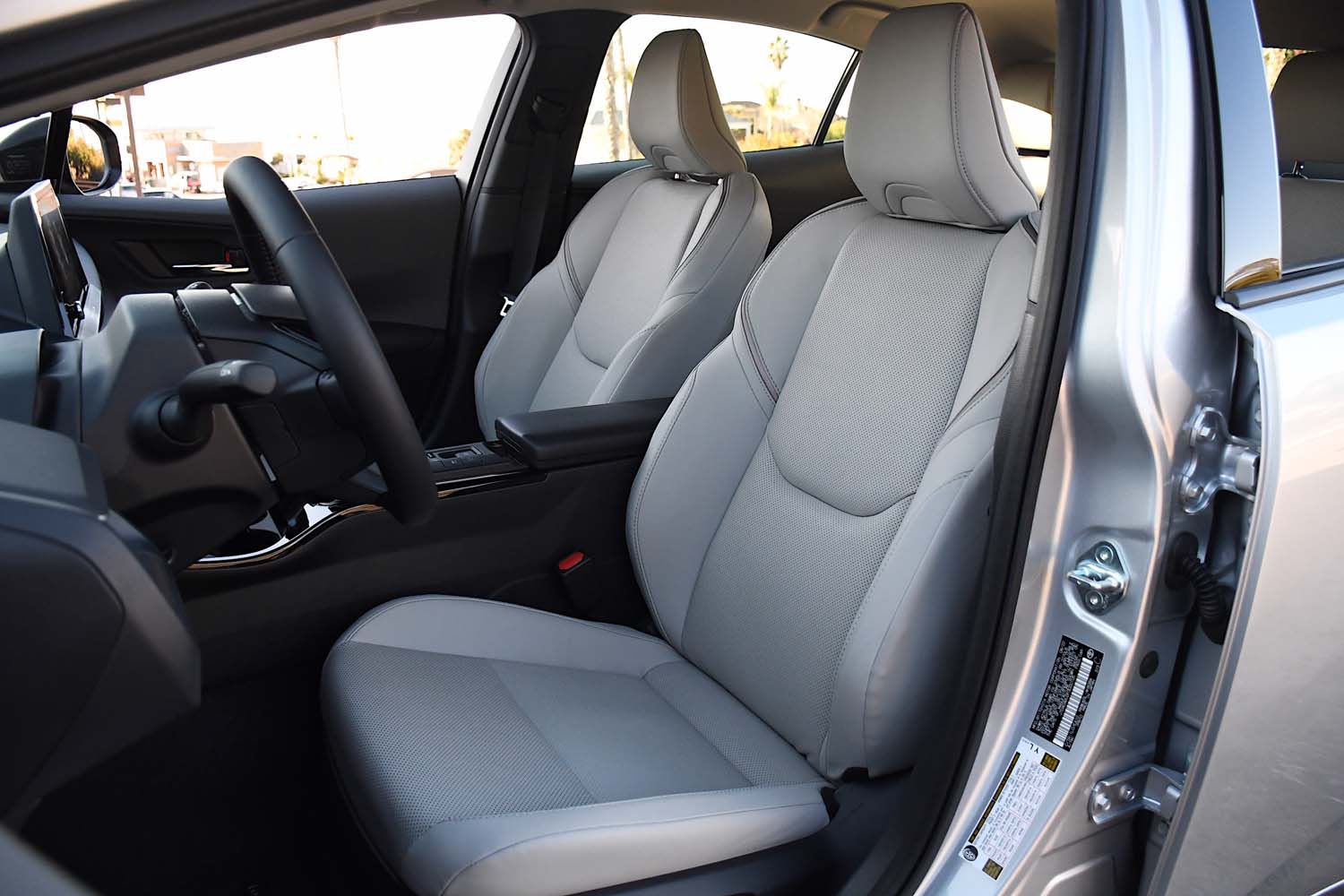 Behind the wheel of the 2023 Toyota Prius

Everything we’ve just described translates to an enjoyable experience behind the wheel. In addition to a more responsive vehicle, you get to enjoy the chassis improvements and the lowered center of gravity. Without telling you that the new Prius corners with the confidence of a GR Supra, we can tell you that its predecessor would have a hard time keeping up with the pace it can impose. This Prius feels a lot sharper overall than the previous generation.

Now for the bad…

The title of this post on the new Prius makes it clear that not everything is perfect with this new model. Let’s go with the other side of the coin.

First, the interior layout. The layout of the driver’s information screen, near the windshield rather than the steering wheel, is not optimal. It will force some people to put the steering wheel in an uncomfortable position so they can see something. With the bZ4X, the problem is the same. 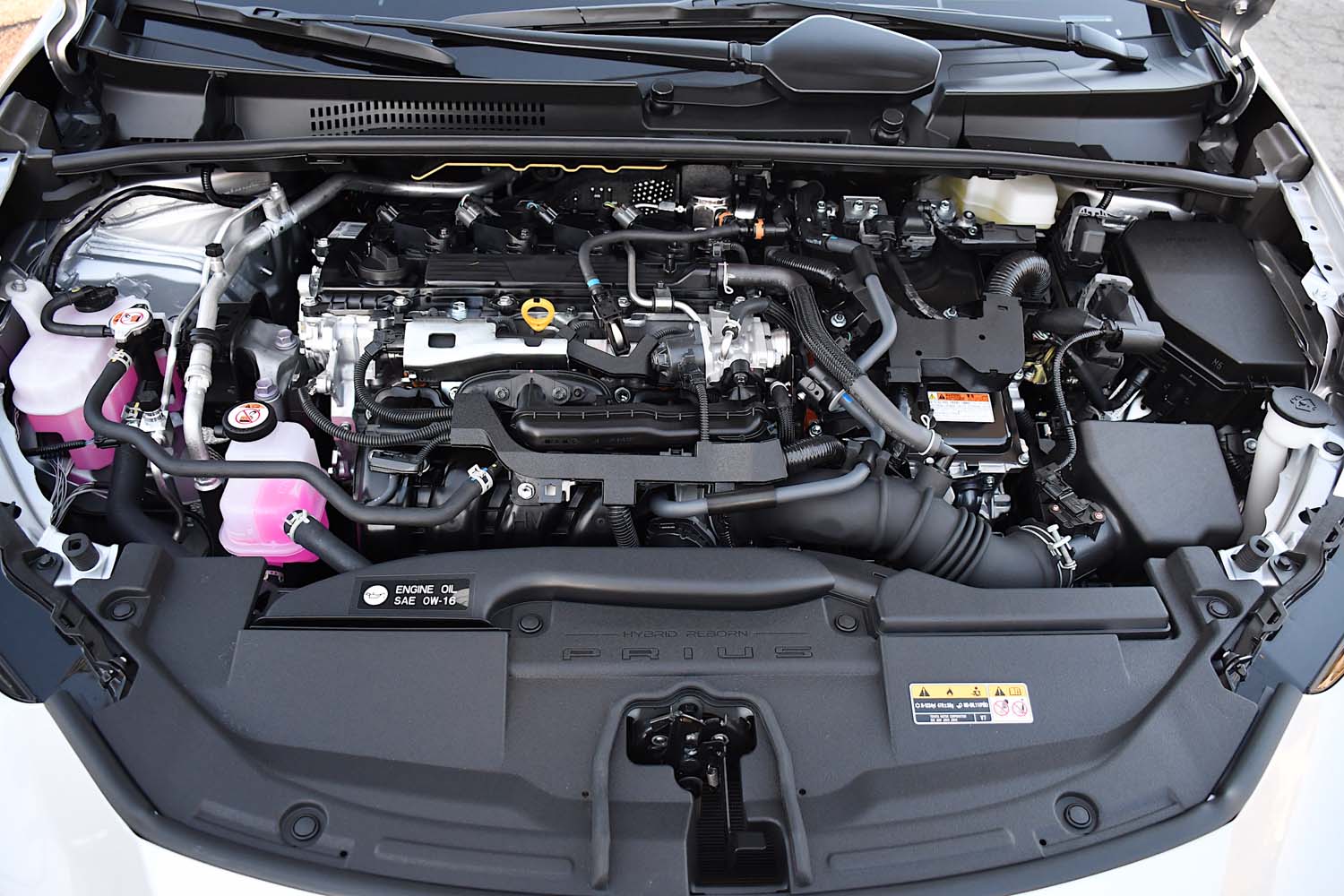 What is clear is that Toyota is telling customers looking for an affordable hybrid car to look at the Corolla Hybrid. It’s also inviting cab owners to opt for the Corolla Cross hybrid. That’s why we were talking about a repositioning of the Prius in the introduction. At this price, it’s no longer an economical solution.

Finally, the other irritating thing is the absence of this base version with front-wheel drive, at least for Canada. Why is that? Because the new 2023 Prius now has an average fuel consumption rating of 4.8 L/100 km. That’s great, but it’s not an improvement over the generation that’s leaving us. In other words, the Prius is still fuel-efficient, but certainly not like the outgoing model. We’re getting a more powerful car, but not a more economical one. It all sounds a bit strange given that it’s not like Toyota has given us a supercar here… 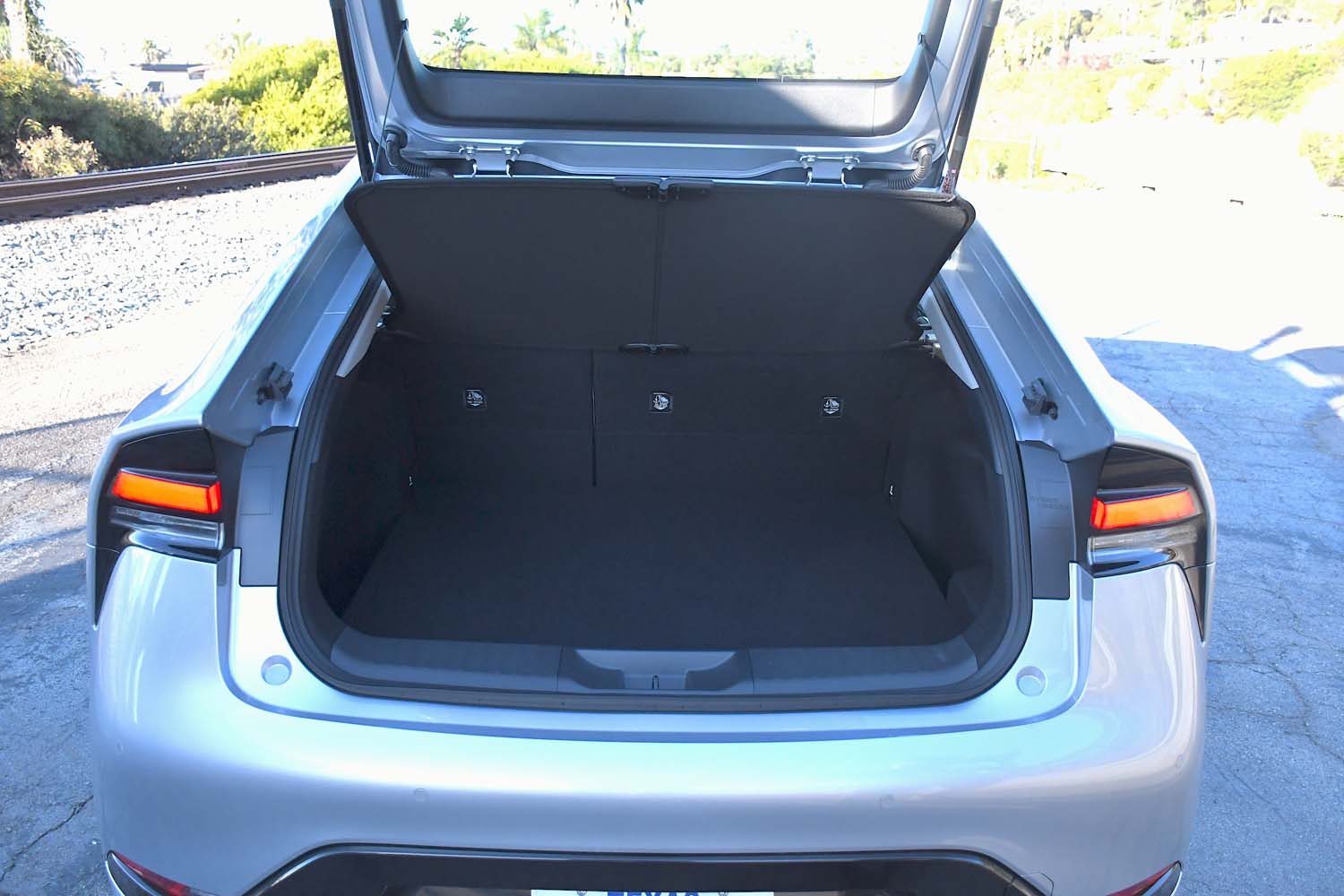 This front-wheel drive version, which will be offered in the US averages 4.2 L/100 km. That’s what we expected from this new Prius, but we’ll have to do without it up here. Apparently, Toyota can’t put heated seats in the FWD model, and for Canada that’s a no-no. Again, strange.

In closing, just to reassure you, there’s plenty of onboard technology and safety features. With the base version, an 8.0-inch touchscreen awaits you with the multimedia system. This increases to 12.3 inches with the Limited variant. Toyota’s connected services, the personal assistant that responds to our voice requests commanded by “Hey Toyota”, is included.

The same goes for safety, with the TSS 3.0 (Toyota Safety Sense) suite that brings together a host of features designed to protect us. 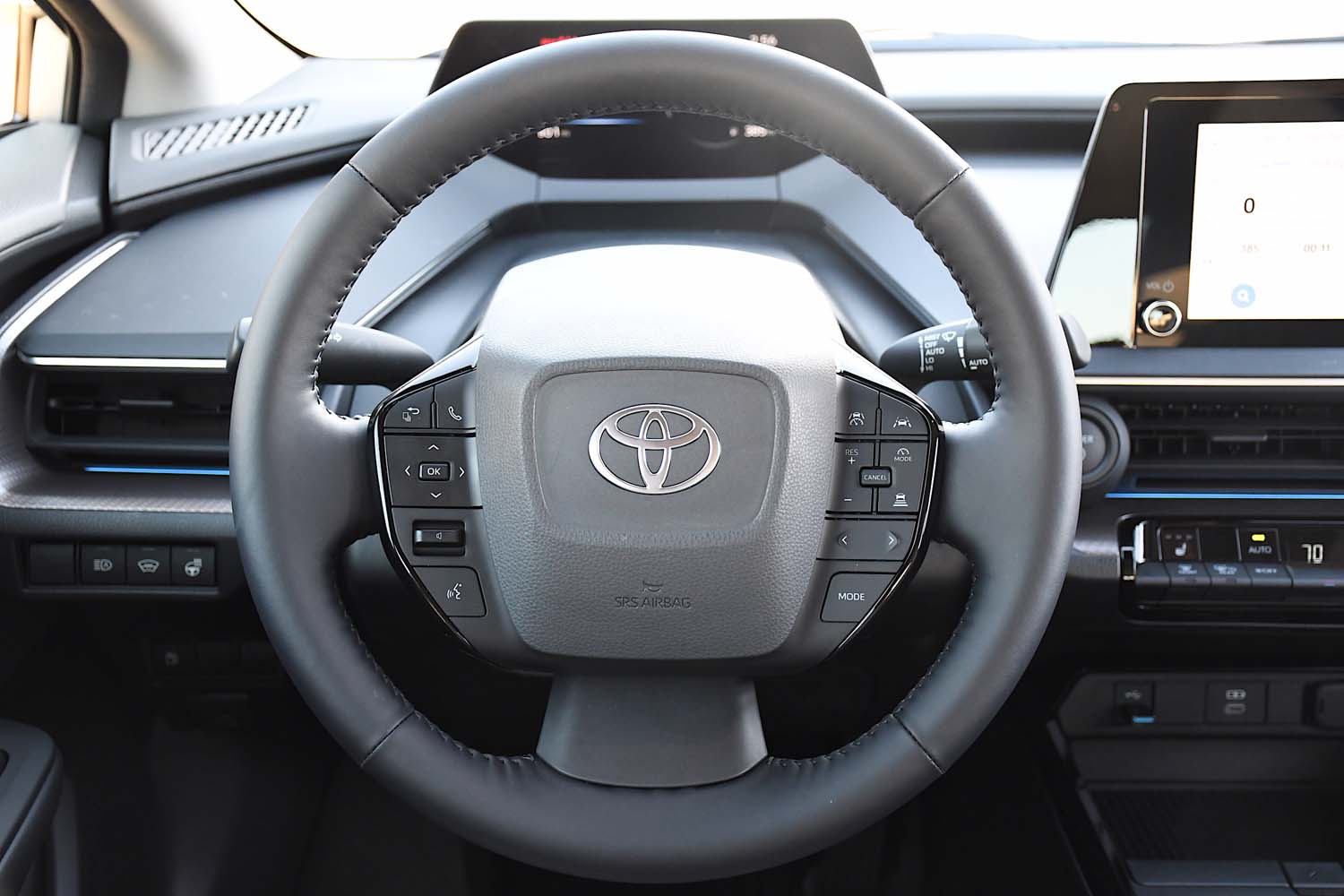 The new 2023 Toyota Prius will hit dealerships early next year, is improved in every way, but it is not as efficient as it was, and it certainly isn’t a bargain. It’s efficient, just not Prius efficient if that makes sense.

But if Toyota believes it needed this reorientation to move forward who are we to argue? I will be curious to see, however, if this new Prius will meet the expectations of its very loyal customer base.

From last month’s category winners, we now have six finalists. The finalists are a mix of EVs and ICEs. Over the course of the...
Read more
Previous articleFirst review of the 2024 Mercedes-AMG C 63 S E Performance 4MATIC+
Next articleAudi Q8 E-tron Production Starts in Belgium