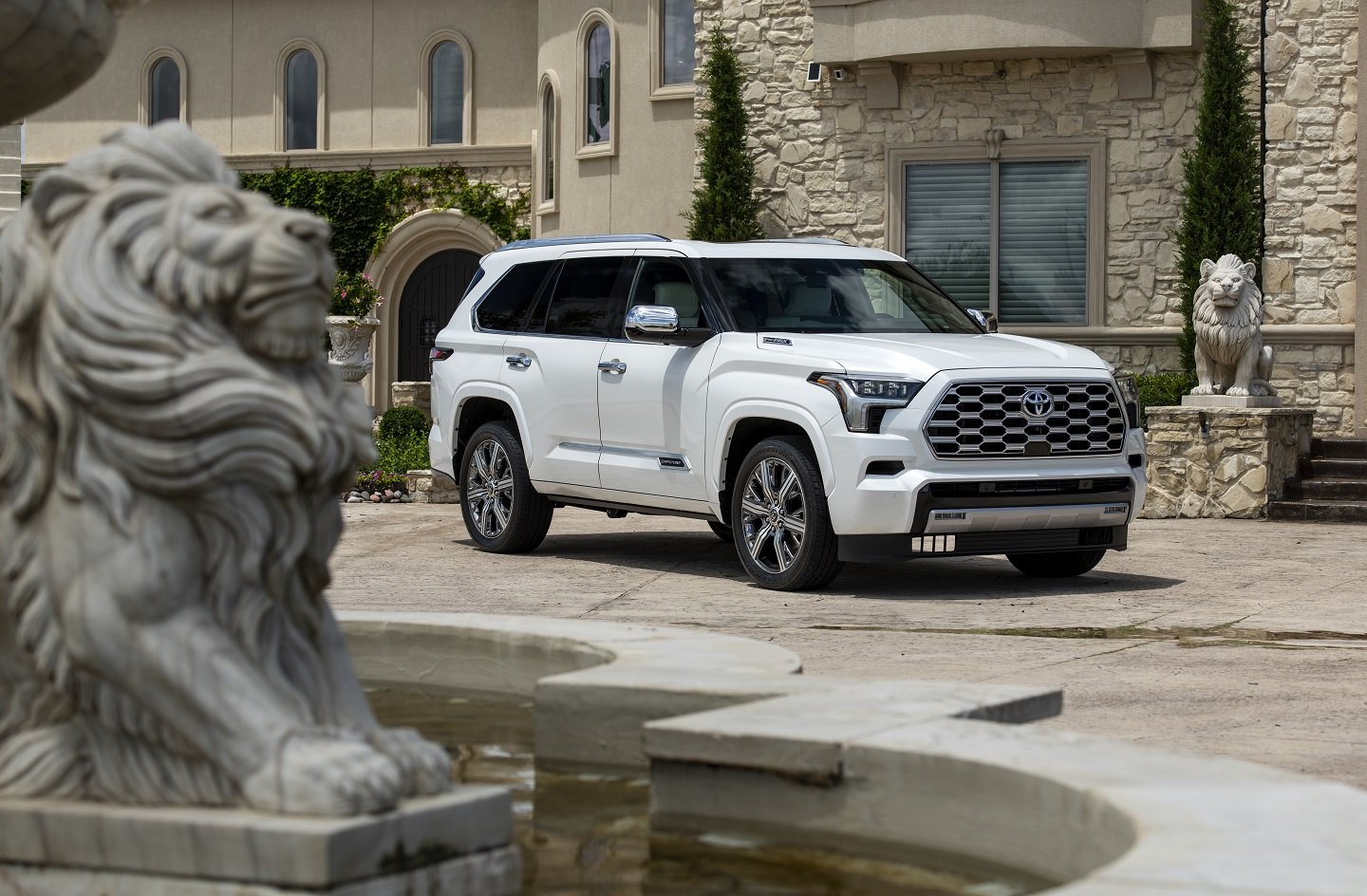 The Toyota Sequoia is back for 2023 and all-new. Based on the platform that underpins the latest Toyota Tundra pickup, the Sequoia will offer a standard hybrid powertrain and start from $75,990 in Canada and will be available this fall.

The new Sequoia is larger than the model it replaces and more capable. It will be able to tow “at least 9,000 lbs” Toyota says. Though Toyota didn’t say which trims will tow more or by how much.

Toyota’s new i-Force Max hybrid powertrain will be offered, combining a 3.5L twin-turbo V6 and a motor-generator stuck between engine and transmission. The combo offers 437 hp and 583 lb-ft of torque, with a 10-speed automatic swapping cogs. Toyota says the driveline lets the house-sized Sequoia hit 11.7 L/100 km combined, an impressive figure for this class of SUV.

All Sequoias get Toyota’s latest multimedia infotainment system, including cloud-based navigation and Google POI data. Heated front seats and a heated wheel are standard, and there are 110V power plugs in the second row and cargo area.

Toyota Safety Sense 2.5 will be offered. It’s not the company’s latest but does include pre-collision system with pedestrian detection, radar cruise control, lane departure alert with steering assist, and road sign assist.

The base model is the Sequoia SR5 TRD Off Road, from $79,990. It seats eight and has TRD interior appointments, TRD shocks, and Multi-Terrain Monitor. Limited, from $78,490, has a panoramic roof, premium audio, heated and ventilated seats, and a Panoramic View Camera.

Platinum is $88,990 and has triple-beam LED lights, power-adjust wheel, ventilated rear seats, air suspension, and other luxury finishes. TRD Pro starts from $90,990 and seats seven with captain’s chairs in the middle. It has a heritage Toyota grille, forged BBS wheels, rear locking differential, and TRD suspension lift with Fox shocks.

At the top of the line is the Sequoia Capstone for $91,990. Based on Platinum, it adds 22-inch wheels, acoustic front glass, walnut trim, and semi-aniline leather.

The 2023 Toyota Sequoia goes on sale this fall.

The Nismo GT4 is a track-only car. It is fully tuned for severe competition use. The new Nissan Z is showing well so far,...
Read more

The i1 will come first in 2027. The i2 will follow in 2028. They will both be assembled on BMW’s upcoming Neue Klasse...
Read more
Previous articleJeep’s EV Plans Include an Electric Wagoneer S and the All-New Recon
Next article2024 Chevrolet Equinox EV Unveiled with Starting Price of $30,000 in the US