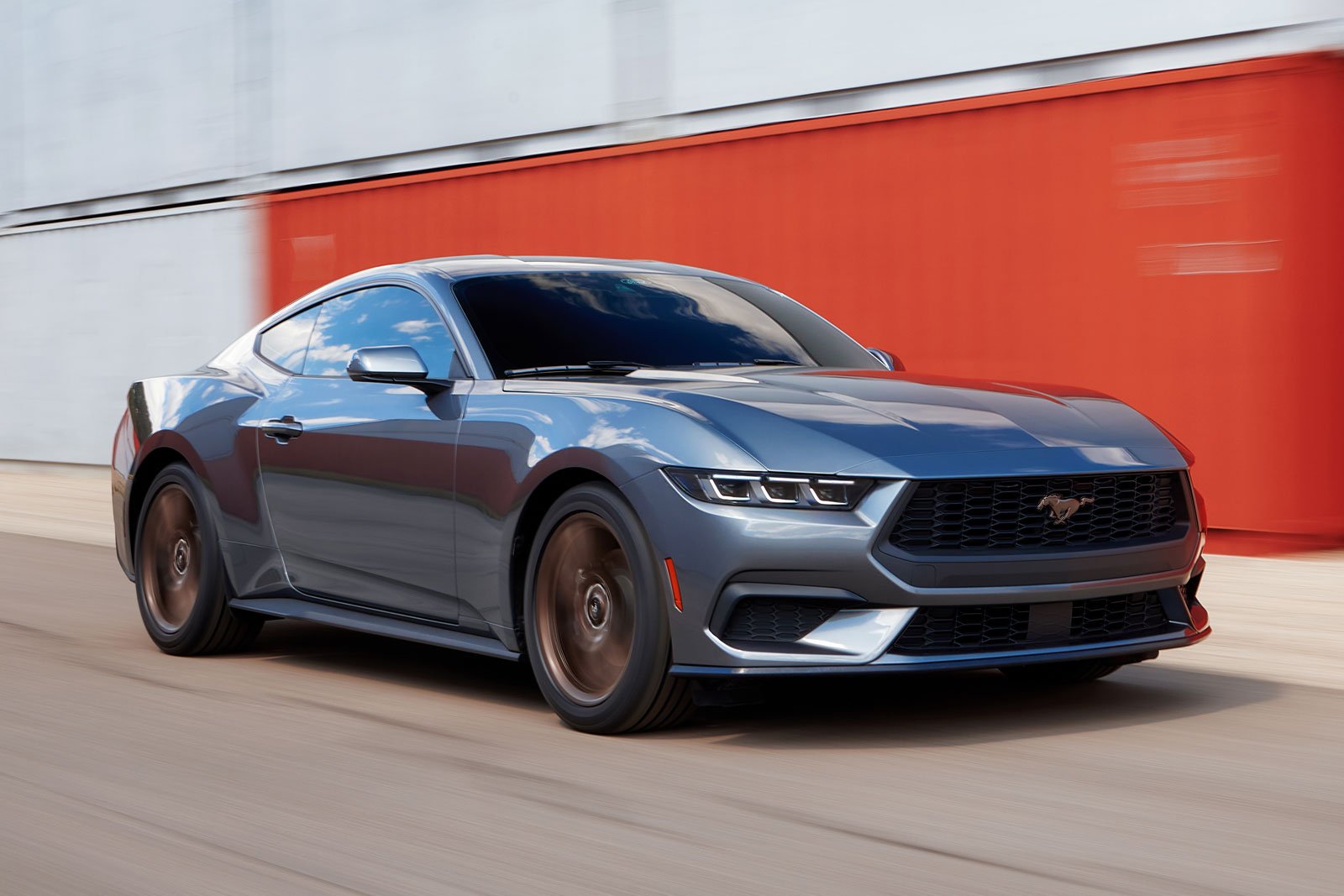 A new chapter for the iconic muscle car.

Ford has just written a new chapter in the Mustang’s long history. As the iconic muscle car approaches its 60th birthday, the all-new, seventh-generation 2024 Ford Mustang has just been revealed, which will hit the road in the summer of 2023.

Current owners made it loud and clear that gas-powered engines are the only ones they wanted in a Mustang, and Ford responded by keeping the current powertrain lineup in place. The base EcoBoost variants get a turbocharged 2.3L inline-four, while the GT trims will rely on the 5.0L V8. Ford did point out that both engine received modifications in order to improve fuel economy, and while no output numbers have been announced yet, the 5.0L engine should be the most powerful in the GT’s history. Buyers will still be able to choose between a six-speed manual transmission and a 10-speed automatic. 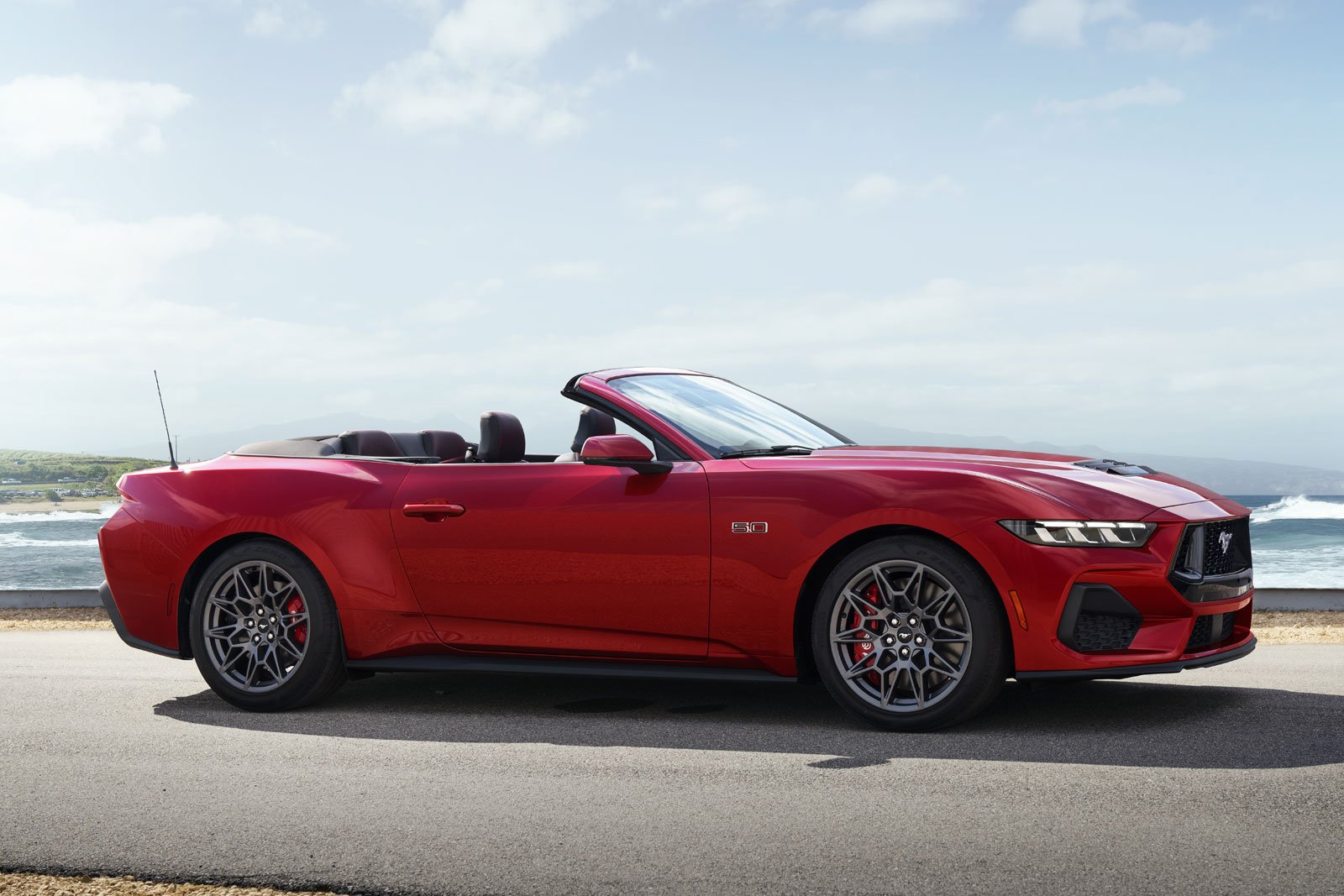 In addition, both variants can be equipped with an optional performance package that includes a front strut tower brace, a Torsen limited-slip differential and a MagneRide active suspension. Wider front and rear wheels and tires, along with bigger Brembo brakes—390 mm rotors up front, 355 mm at the rear. The GT Performance package adds brake ducts that enhance cooling and an auxiliary engine cooler, while Recaro seats and an active exhaust system can be specified as well.

The 2024 Ford Mustang GT with the six-speed gearbox gets downshift rev matching, while electronic drift braking is a new, segment-exclusive feature that allows drivers to learn and hone their drifting skills as well as offer seasoned pilots a competition-ready system. 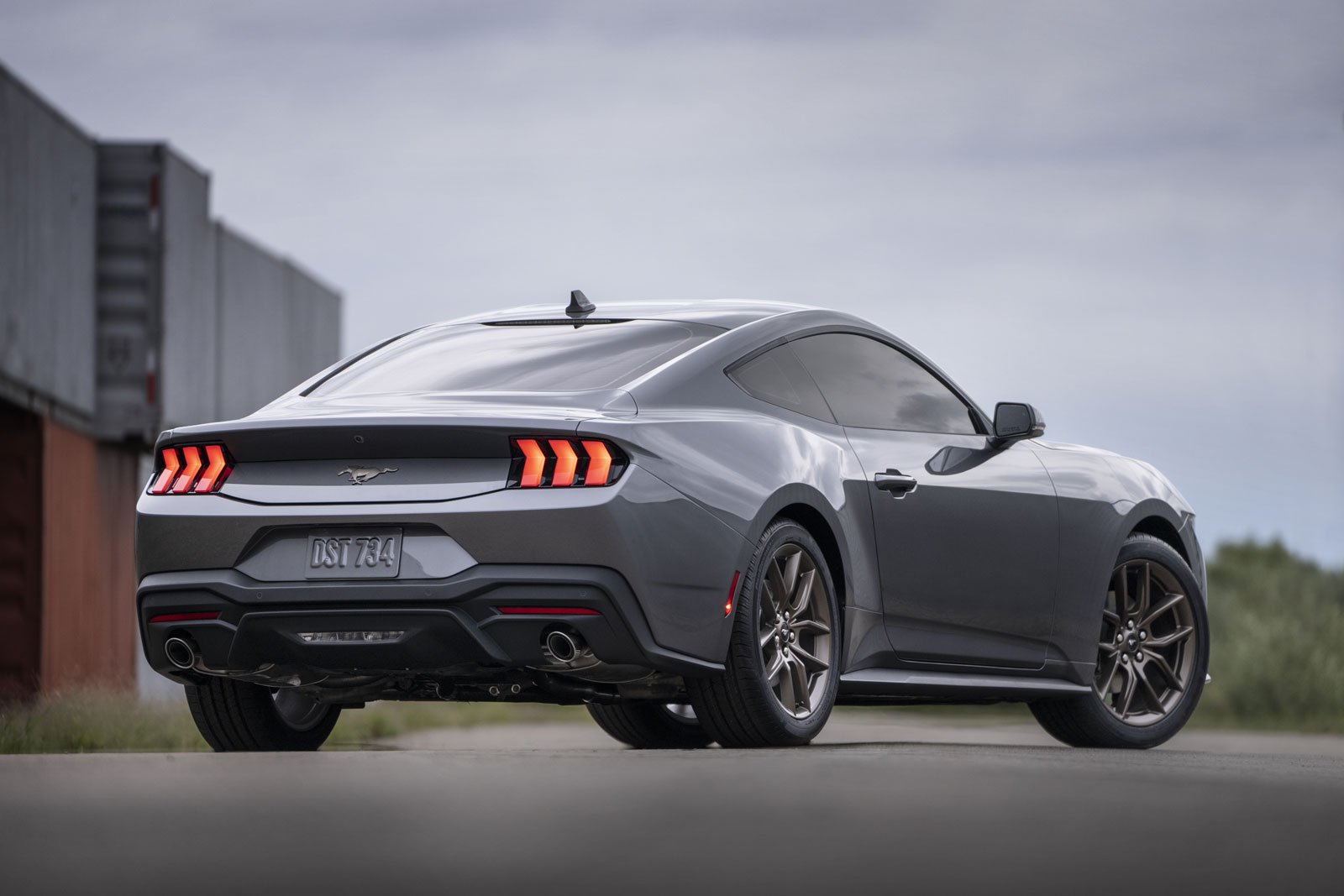 Visually, this new Mustang offers a more chiselled exterior design with sharper angles. The Tri-Bar LED headlamps carry on the muscle car’s classic visual signature. Each trim level receives a unique front fascia, as the GT stands out from the EcoBoost variants by larger and more aggressive-looking grille openings for improved airflow, which reflects its higher output and performance. A Mustang wouldn’t be a Mustang without a convertible, which is still available. There are 11 paint colour choices, including the new Vapor Blue and Yellow Splash hues, complemented by new body stripe colours and graphics.

Customers can also choose between three Brembo brake calliper colours, including Black, Red and Grabber Blue. A new selection of alloy wheels is offered as well, with sizes ranging from the standard 17 inches on the EcoBoost trim, 19 inches on the GT and optional 20-inch rims. 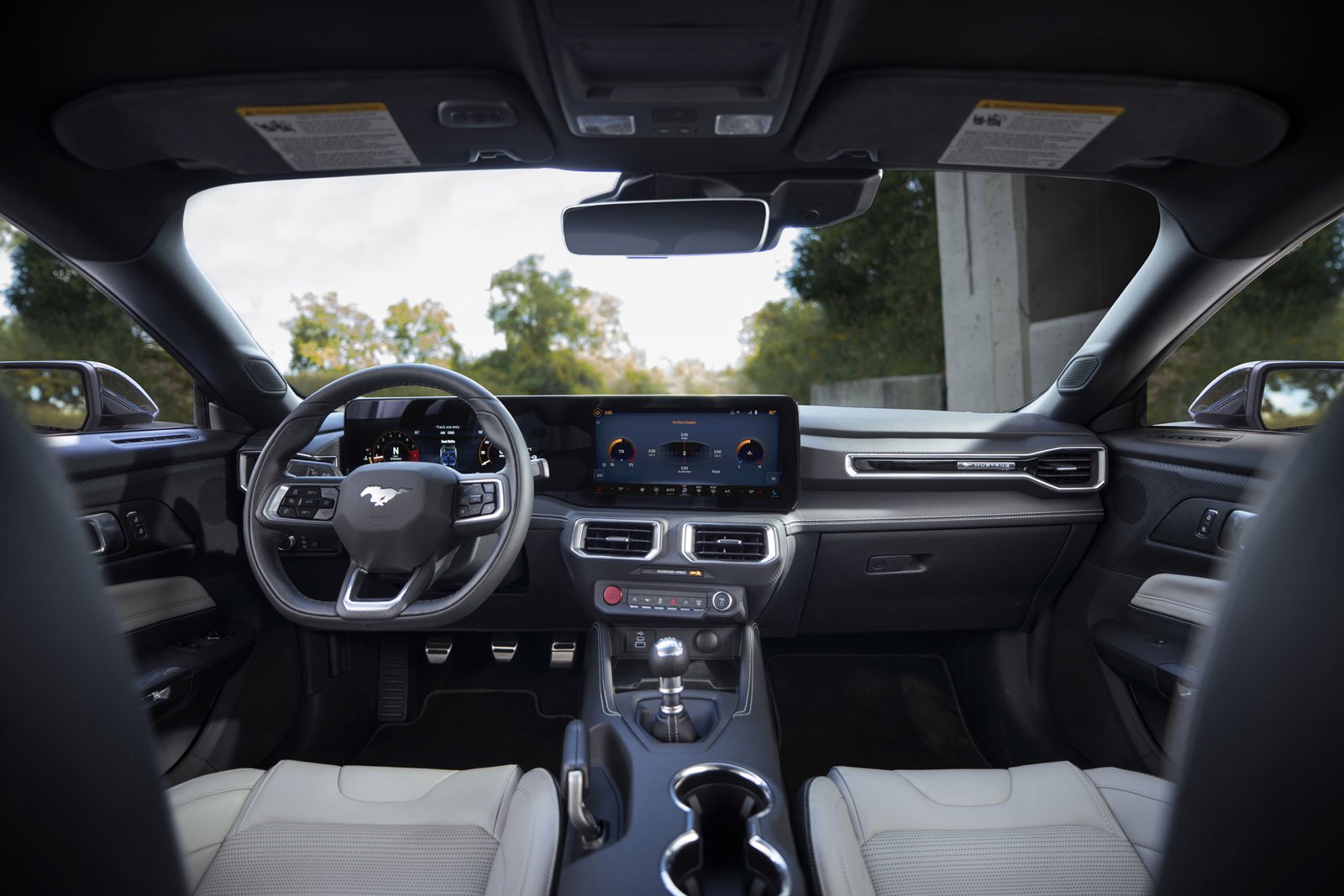 The automaker follows the current trend of offering a two-screen combination in the 2024 Ford Mustang, which are separated in the base variants, or integrated within a single glass panel in the uplevel trims. The 12.4-inch digital driver instrument panel can be customized to display various animated screens and new drive mode-dependant visuals. Based on the Unreal Engine 3D video game tool, when the driver chooses one of the personalized drive modes, the latter appears on the 13.2-inch infotainment screen with real-time graphics. The settings can be adjusted by simply swiping said graphics to rotate the car, like in a video game. We almost feel as if you’re playing Gran Turismo. There’s also a Fox Body background that’s a throwback to the analog gauges of the ‘70s and ‘80s, which should please Baby Boomers.

On the outside of the 2024 Ford Mustang, animated lighting welcomes the driver as they approach the vehicle, and as soon as they climb in, the Mustang’s animated screens light up. And for those who like to hear the sound of the engine, the new Remote Rev feature allows Mustang owners to rev the engine remotely, using the vehicle’s key fob. Here’s a new gadget to impress the neighbours. 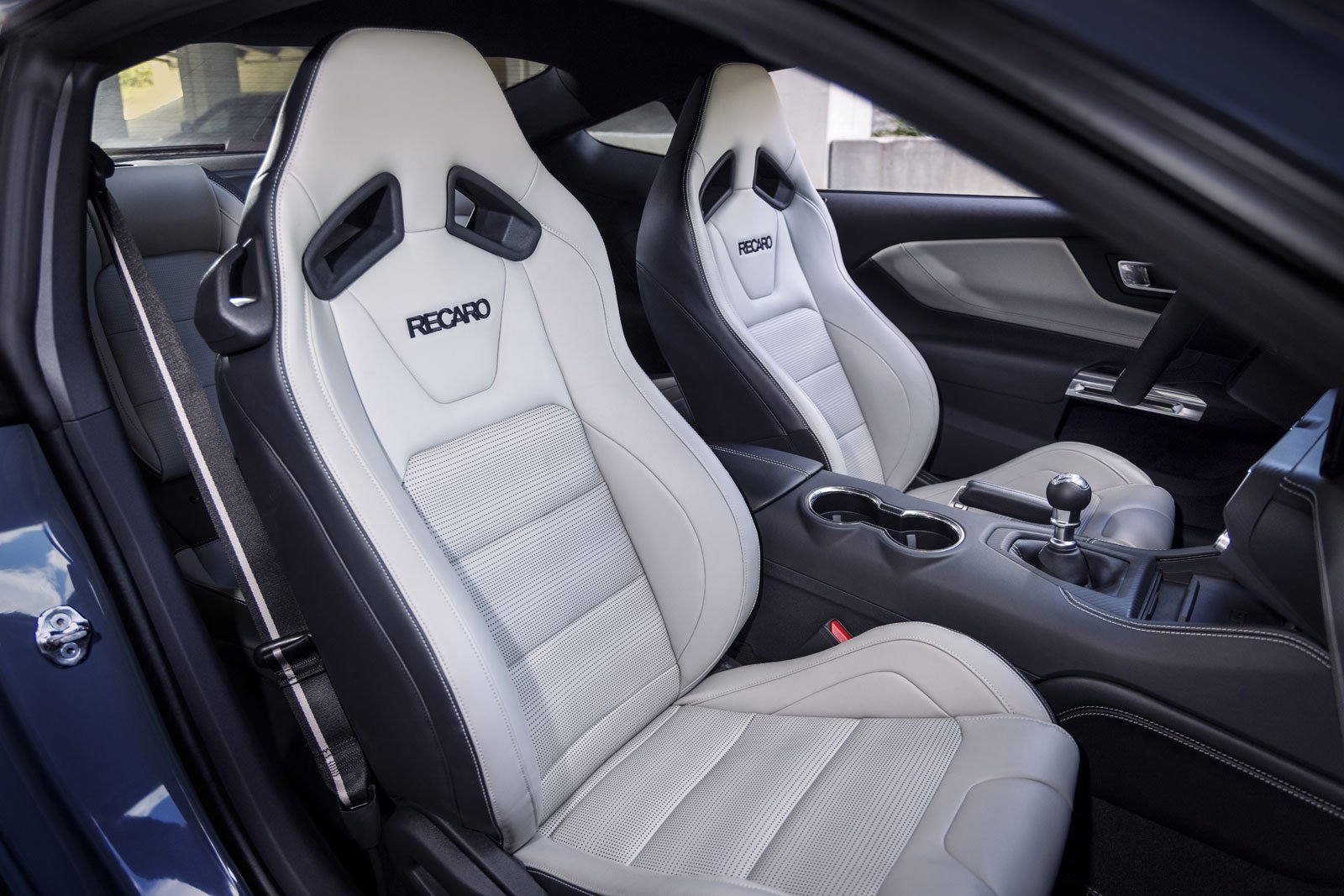 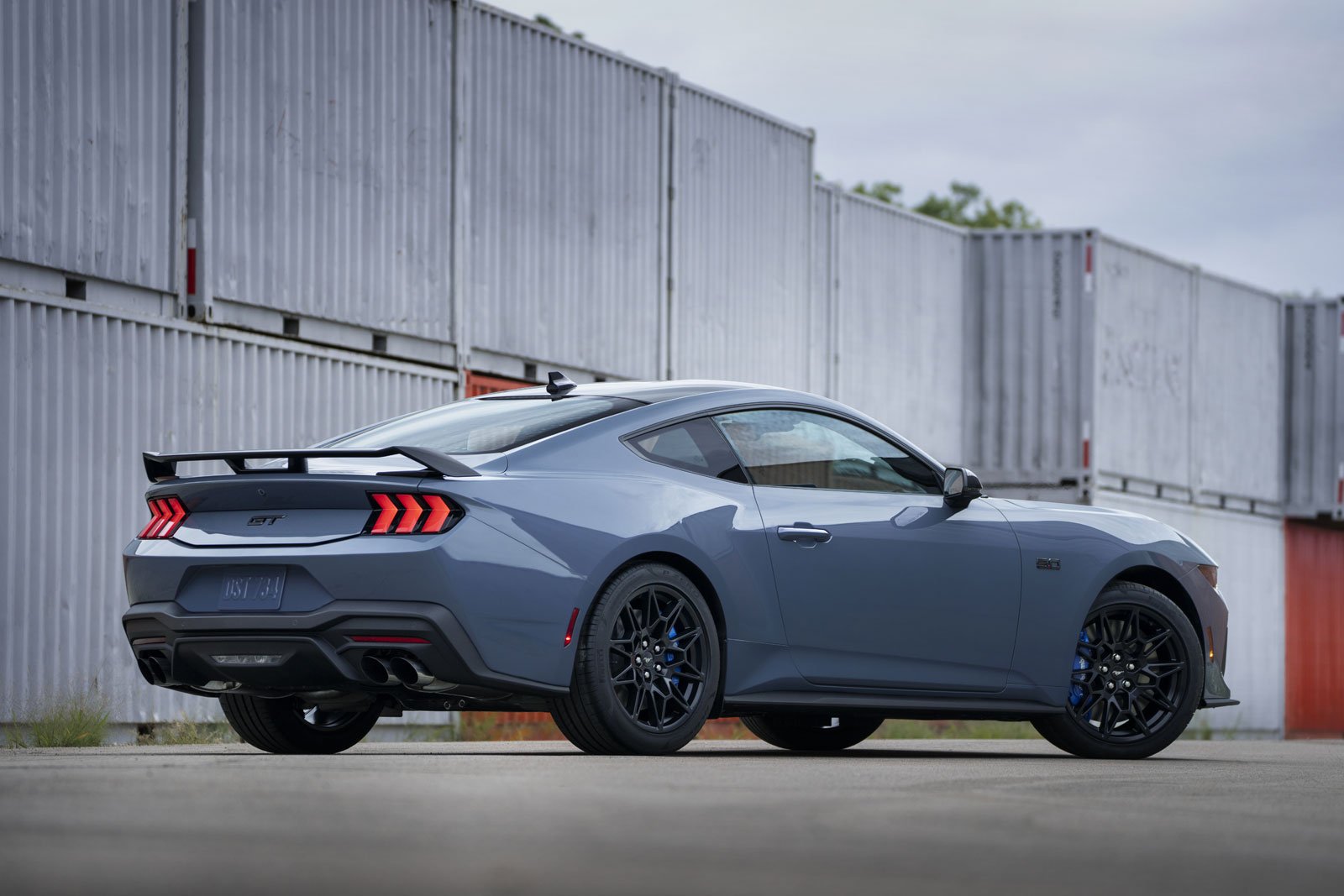 The centre console can also integrate an optional wireless charging pad for smartphones. A B&O sound system is also available, while Apple CarPlay and Android Auto are featured as standard with the SYNC 4 infotainment system.

Pricing for the 2024 Ford Mustang will be announced at a later date.

Elon Musk says the first units will be built this summer, with full-scale production next year. The specifications and price of the electric...
Read more
Previous articleHonda Prepares the Arrival of the 2023 Pilot
Next articleSubaru Reveals 2024 Crosstrek. Yes, It’s New, We Swear