Newfound details about a future Tesla battery indicates that the 400-mile (640+km)range barrier is likely to drop.

Many EV owners and enthusiasts will tell you that range anxiety is a thing of the past however conquering existing range barriers continues to be a challenge. Tesla has set the benchmark since the beginning by providing its users with the longest available ranges on the market and now, the gap is about to widen. A new battery pack is set to break the 400-mile range mark.

Musk essentially confirmed that this was a done-deal during the Tesla Q4 2019 earnings call, stating that: “It won’t be long before Model S has 400-mile range.” The well-known Jason Hughes, Tesla owner and hackers tweeted the following: 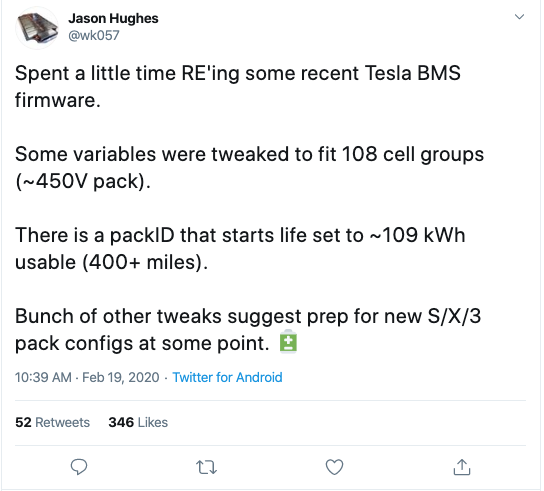 Also part of the findings that a new battery pack configuration that would be composed of 108 cells per group at ~450 volts per pack. This would potentially replace the older Model S and Model X pack, aligning closer to that of the Model 3 and upcoming Model Y.

Tired of waiting for your Mini? How about a puzzle to pass the time Mini making garage-sized and normal-sized puzzles for waiting clients Like...
Read more
Previous articleBugatti Marks Chiron Milestone with the ‘Edition Noire Sportive’
Next articleTeam Of Canadian Drivers Set To Cross The Country In A Tesla Model 3 Performance