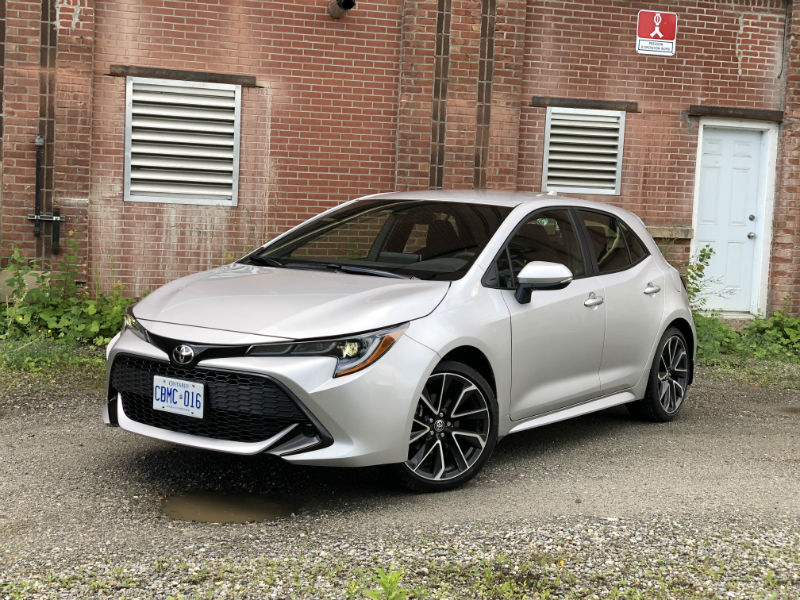 Orford, QC. Hatchbacks used to be a very common sight. Every major carmaker offered one or more but at one point in time, they became uncool like the their closest relative, the station wagon. Unlike the latter, however and sadly, hatchbacks (HB) have made a serious comeback. Not all HBs are called as such. For example, the luxury brands are being careful with their words, referring to them as sportbacks, 4-door coupés, and other fancy names.

Toyota’s taken the bull by the horns and called its hatchback what it is, just like Honda. And just like their biggest Japanese rival, Toyota’s positioned its HB as the aspirational version of their hyper-popular old-people-that-love-beige-appliances Corolla. They’re also saying that this is the return of the HB but the fact of the matter is that it’s been around since 2003 when the Matrix, aka Corolla hatchback, was launched.

Big on character, small on the inside

This opens up the occasion to address the new 2019 Corolla HB’s single greatest shortcoming: its trunk. It’s tiny, nearly useless. This sole fact limits its appeal severely. It won’t do as a family vehicle, nor will it work for empty nesters that enjoy any real kind of activity that requires equipment larger than a tennis racquet. 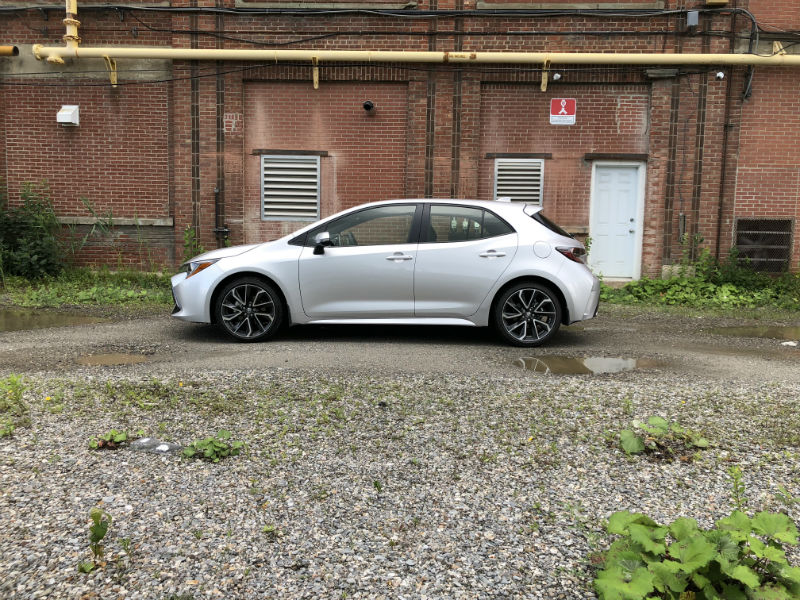 This is truly an unfortunate consequence to the car’s very dynamic styling. Here, no other Corolla, including any and all SR5s, have never been as attractive. Standard features include full LED lights and a rear hatch-mounted spoiler. The new HB is 30mm wider/40mm longer with a 40mm longer wheelbase and 25mm lower than Corolla iM. They could have increased trunk space but the upside is that I can almost imagine it in WRC livery…

Toyota says they’ve always listened to their clients but they’ve never properly replaced the Matrix’ storage and trunk capacity. The Scion iM, Corolla iM and new Corolla still can’t match the Matrix. And, the fact that this car is built upon the Japanese giant’s fantastic new Toyota New Global Architecture or TNGA platform seems like a missed opportunity. Or is it?

The all-new Toyota RAV4 is coming out a little later this year, also underpinned by the TNGA, and it will fulfill all storage and cargo needs. Between you and I, Toyota makes a far prettier penny selling RAV4s than they do delivering Corollas…

What about this TNGA you keep hearing about? It is another highly advanced, modular and flexible building block that will serve many new Toyota and Lexus products in the near future. Its cleverness lies in its rigidity that allows the suspension to do its damping job without having to make up for a “softer” structure. The bottom line is that the Corolla HB is one of the best riding and driving small cars ever. EVER. The VW Golf has long been the one by which all others were measured but I think that has changed. The Corolla, new Subaru Impreza/Crosstrek and Golf are the current champs in the segment. The next Mazda3 could potentially mix it all up very soon. What a great time to be driving and loving small cars! 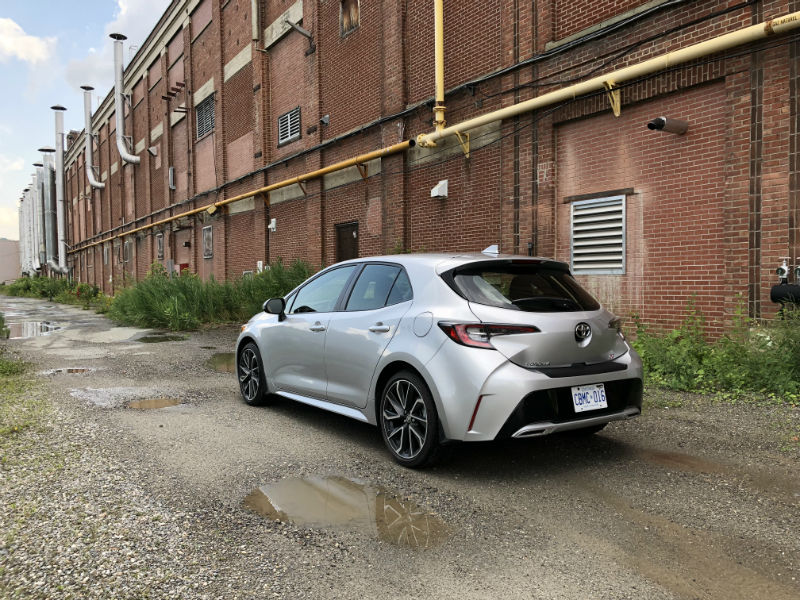 At first, it doesn’t seem right. The Corolla HB feels solid and compliant. It’s responsive and immensely stable. During the course of the test drive, I did things to the car that 99.9999999% of Corolla owners will never do and it blew my mind. No matter the road surface’s condition, the tires remained in contact with the tarmac, the brakes took on far more abuse than they should have and steering was spot on. I would have kept on driving all day.

More power, but could use more power

The all-new 2.0-litre 4-cylinder Dynamic Force engine is considerably more powerful than the sedan’s sad 1.8-litre mill. Despite producing 168-horsewpower at 6,600 rpm and 151 lb.-ft. of torque at 4,800 rpm, it does not make the Corolla quick. For the first time is a very long time, both transmission choices are excellent.

The direct-shift CVT has a physical 1st gear – This is a breakthrough! Gone is rubbery acceleration from a dead-stop and unpleasant engine whine. Once the 1st gear’s job is done, the transmission switches over to the belt and functions like a normal CVT. In a few words, Toyota should offer Honda, Nissan and Subaru their CVT technology. It all gets a little sharper when the “sport” drive mode button is pressed. And then there’s the manual gearbox. Here too, VW and Mazda essentially owned the field but Toyota, yes Toyota, has punched its way to the top where positive shift, good clutch feel and engagement are concerned. It even includes a rev-matching function… Both transmissions are incredibly effective and good fun to use.

I can’t believe I’ve written all of the above on driving a Corolla either… Toyota also wants me to tell you that Toyota Safety Sense (TSS 2.0) is standard on this car. It includes pedestrian detection, pre-collision alert and lane departure alert with steering assist. And there’s more.

The cabin is lovely and fairly roomy up front. The rear bench is tight compared to its main competitors but will accommodate two passengers. The TNGA is also responsible for a much quieter cabin overall and a great sense of substance. Base equipment includes a 4.2-inch multi-info gauge display and an 8-inch touchscreen. Entune 3.0 is part of the deal (Entune App Suite Connect including -Traffic, Weather, Slacker, Yelp, Sports, Stocks, Fuel and NPR One), and Apple CarPlay. You can also purchase a dashcam, developed and built in Canada, for about $450 with installation. 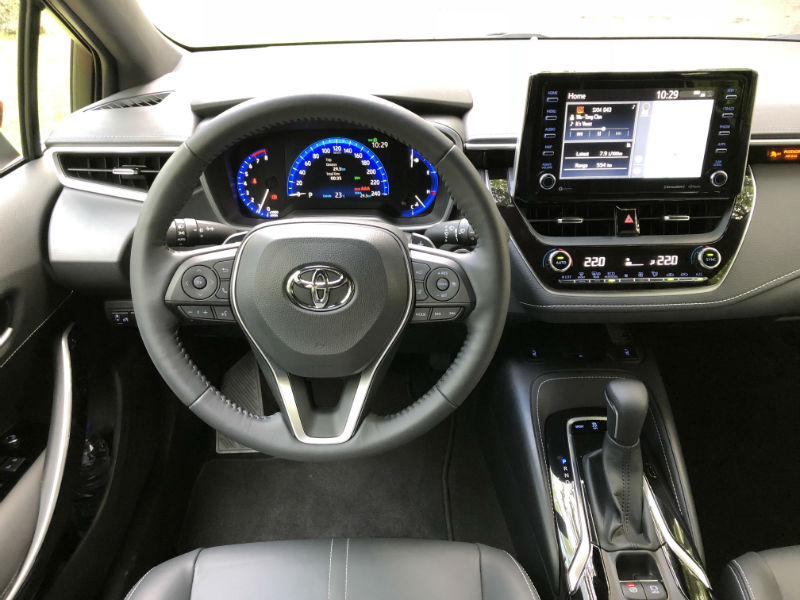 In conclusion, the 2019 Toyota Corolla HB is loaded with content, technology and driving fun. It’s way short on interior space but that’s the only real issue.

The motorsport division is trying to improve handling with its future N branded cars. The Hyundai Ioniq 5 N will be the brand's...
Read more
Previous articlePorsche Taycan: the power, the range and the speed
Next articleShould You Buy a 2019 Toyota Corolla Hatchback?

2022 Kia Rio Review: On the Top Podium Step in a Three-Way Race

Los Angeles, California - Porsche has been perfecting the 911 for decades and, at this point, you'd think the model would have come of...
Read more