By silver-lining, we meant that all these 2nd generation Toyota MR2 are wrong-hand drive cars so they’d be only mildly more annoying to drive in North America. Honestly, we can’t find anything else wrong with the cars other than the fact that they are sitting aimlessly on a lot in Sandycroft, North Wales.

For those unfamiliar with the Toyota MR2, it was introduced in 1985, at a time when the Japanese carmakers arguably owned the sports car segments. Sure, the Chevy Camaro and Ford Mustang “existed” but Nissan, Toyota, Mazda, and Honda owned the roads with their now legendary sports cars such as the 300ZX, Celica, RX-7, and Prelude, respectively. 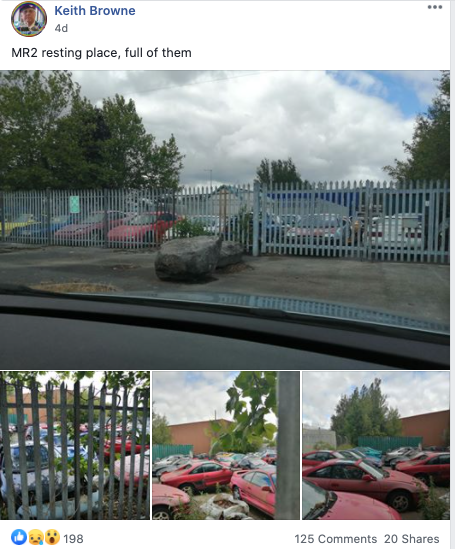 The Toyota MR2 was especially unique as its engine was located behind the passenger compartment and could be supercharged. The second generation arrived in 1991 with more graceful lines and a turbocharger. It is this car that can clearly be identified on this lot.

Why someone accumulated so many of these cars in one spot can only be speculated upon. Jokingly, many have commented on the original post by Keith Browne on Facebook that they are destined to become Ferrari kit cars while others think they belong to a known scrapper/collector.

Either way, we hope they’ll be saved or at the very least a handful will rise from the yard thanks to donated parts. The Toyota MR2 is a fantastic car.

Approximatively 30 employees are affected VinFast Canada will now be a member of VinFast North America. The employees in VinFast's stores in Canada...
Read more
Previous articleRivian Might Be expanding Its Product Portfolio With Recently Trademarked R1V And R2X
Next articleThe 2021 Subaru Crosstrek With The 2.5-litre Boxer Engine Is The One We’ve Been Waiting For